Westward was the next plan. From Doncaster on small roads, for a while, to Liverpool where I was going to spend some days with friends.

The first half of the leg I was escorted by Dave and Mick. They were up for a ride, it was Saturday and excellent weather. I should mention they’ve done an impressive amount of mileage together, across Europe. And have gained a wealth of knowledge, some of which I’ve benefited from more than once.

You can read some of their stories on this page. Good reading! You’ll find lots of useful tips as well.

Westward across the country 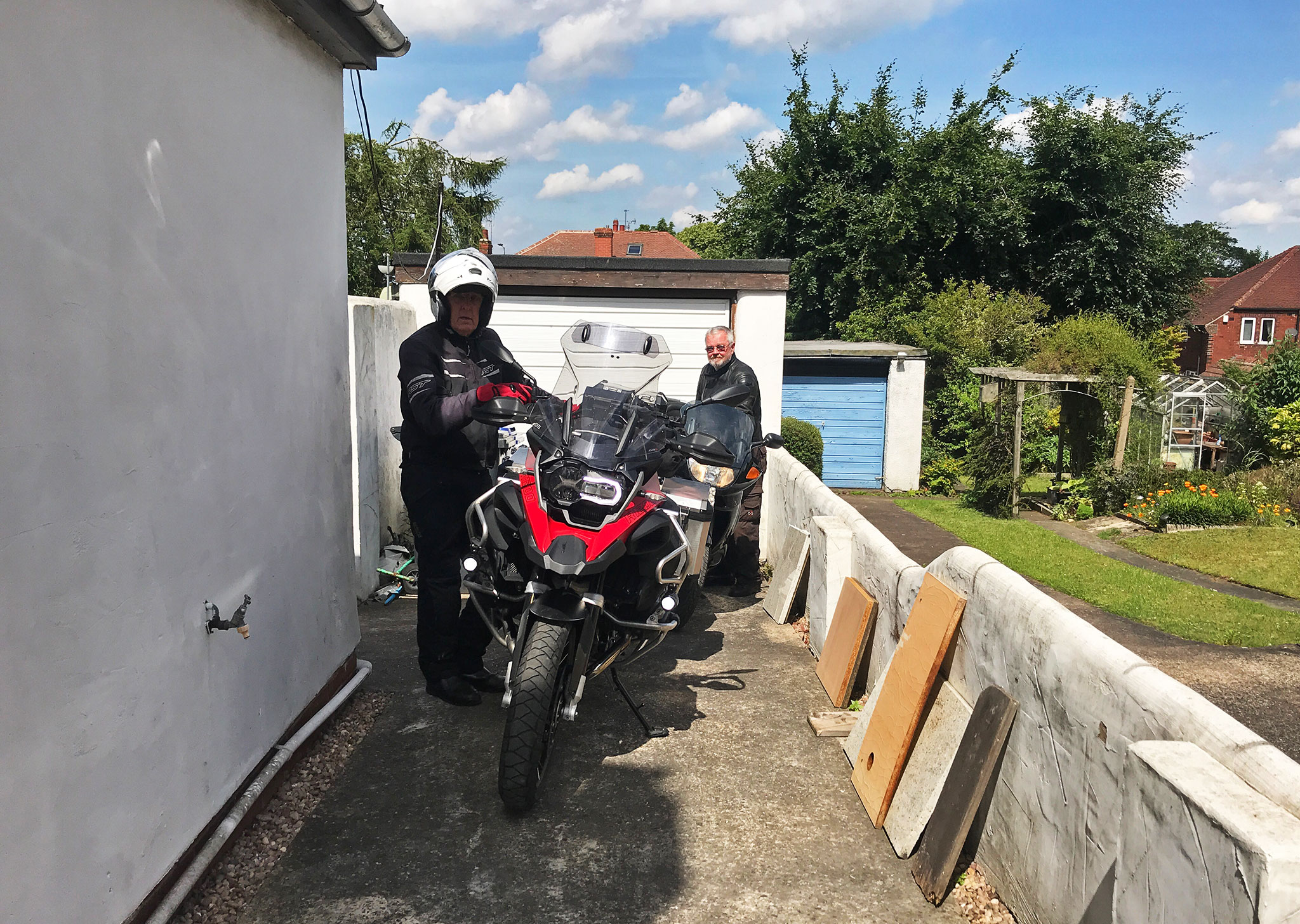 Westward: from “the launch pad” at Dave’s, Mick with the cow in front

We rode out of Doncaster, followed the A635 past Billingley, then A6195 to Broomhill, to Tankersley and hit the A616 . There we took off to continue in direction of Deepcar where small roads and more interesting landscape awaited us. 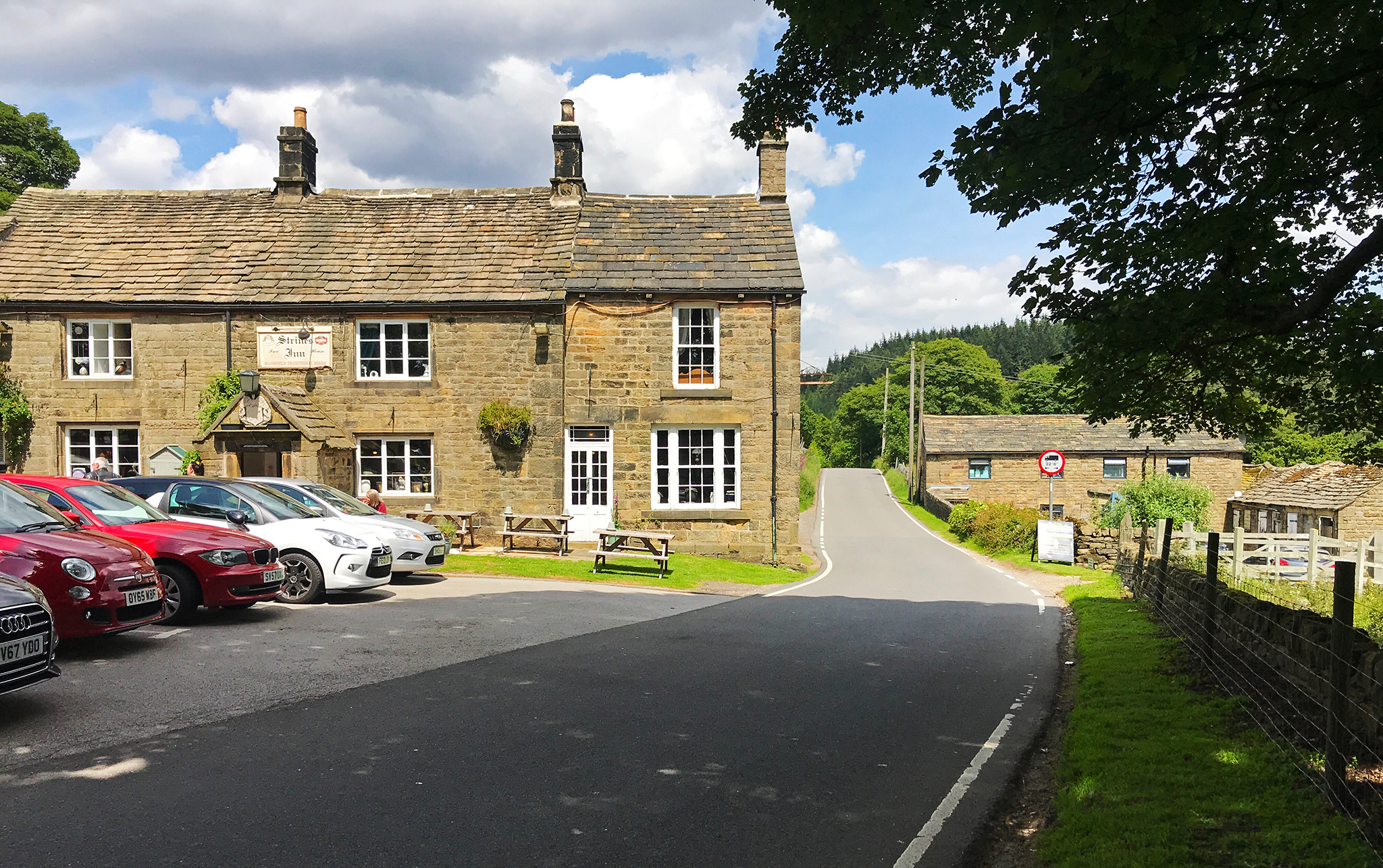 Eventually we got onto the Mortimer Road which led us to Bradfield Dale and The Strines Inn. 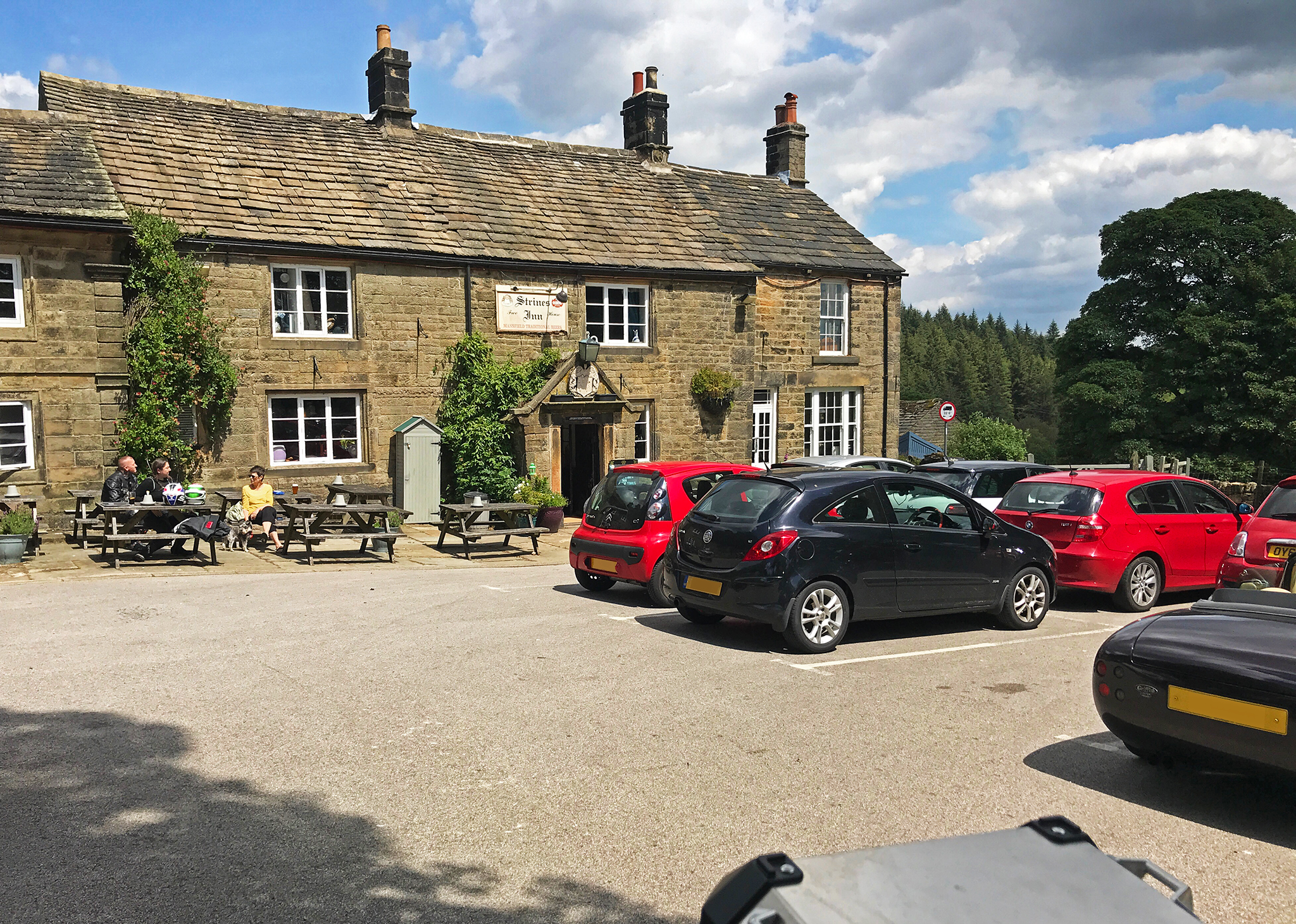 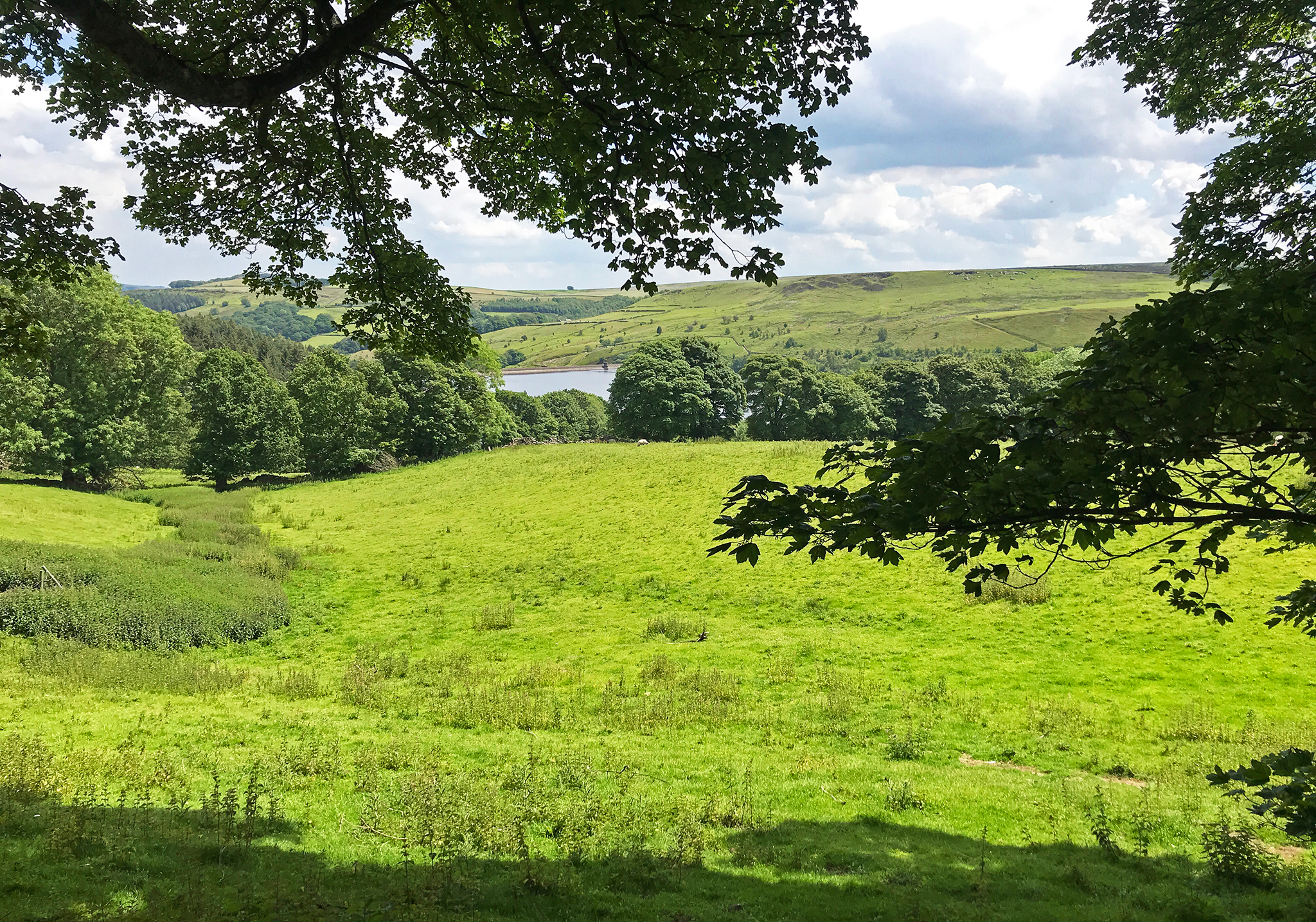 The Strines reservoir seen from Mortimer Rd, right across by the Strines Inn

The inn was originally a manor house, built in 1275, converted to an inn in 1771. And it has been in operations since. The Inn also features some rooms for those wishing to stay for a night or more. 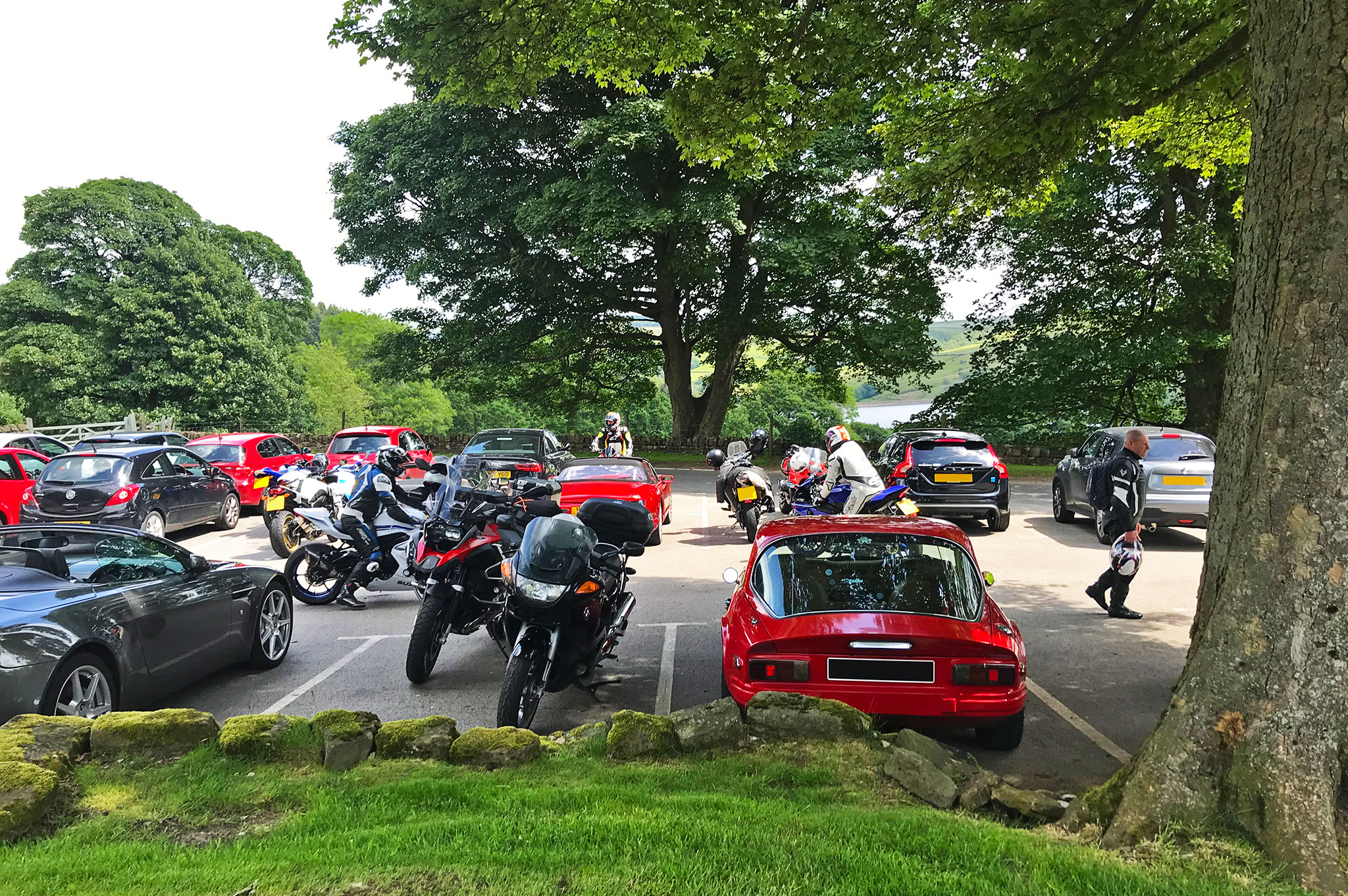 The Strines Inn parking, filled up with cars & bikes

On beautiful days like this Saturday The Strines inn is also a meeting place for car enthusiasts, motorbike riders, or people wanting to get out to the countryside. The lunches are supposedly good too,  too early for us. 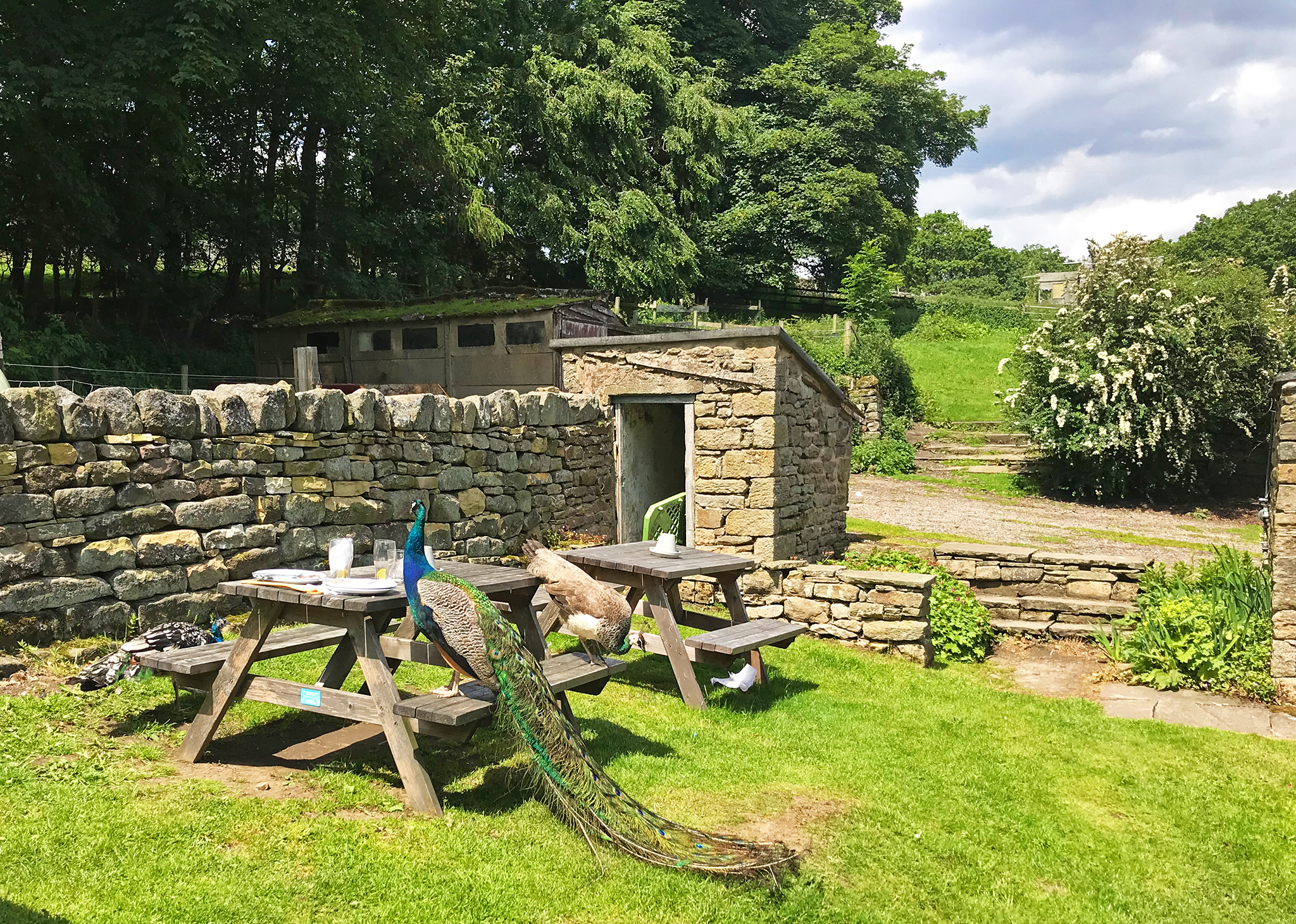 The party then headed down the hills to Glossop where we split up. They continued their tour and return, whereas I got on the M60, then M67. A swift route, around Manchester, then finally onto the M62 to Liverpool.

It was a short ride to Liverpool, and for the next couple of days I parked the motorcycle, to spend time socializing and seeing the city. 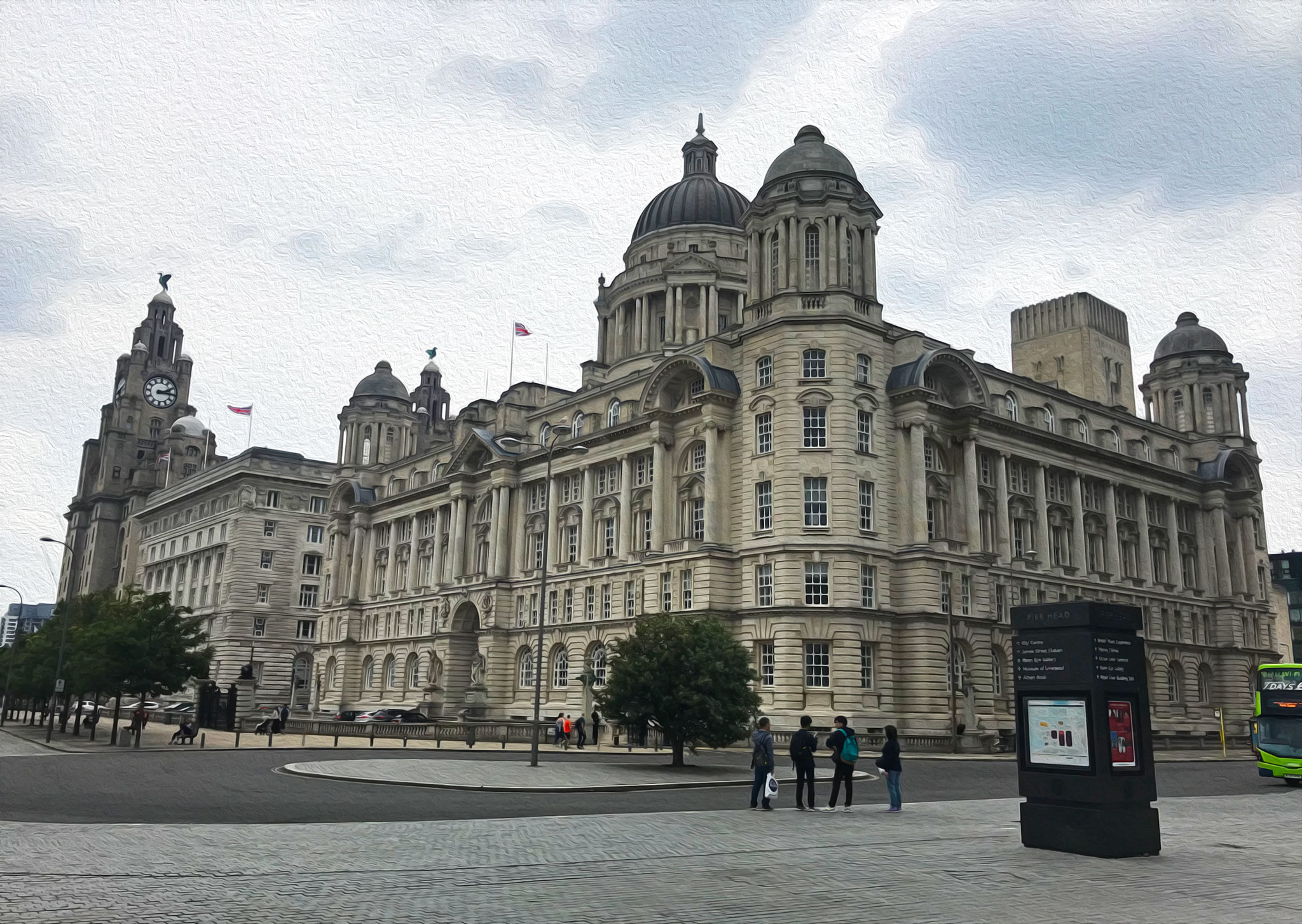 Liverpool Waterfront, with the Royal Liver building in the rear

I like Liverpool very much. The city has had its struggles, with poverty, with decay, crime, drugs, you name it and they’ve had it. But over the course of the past decade plus it’s been on the rise. 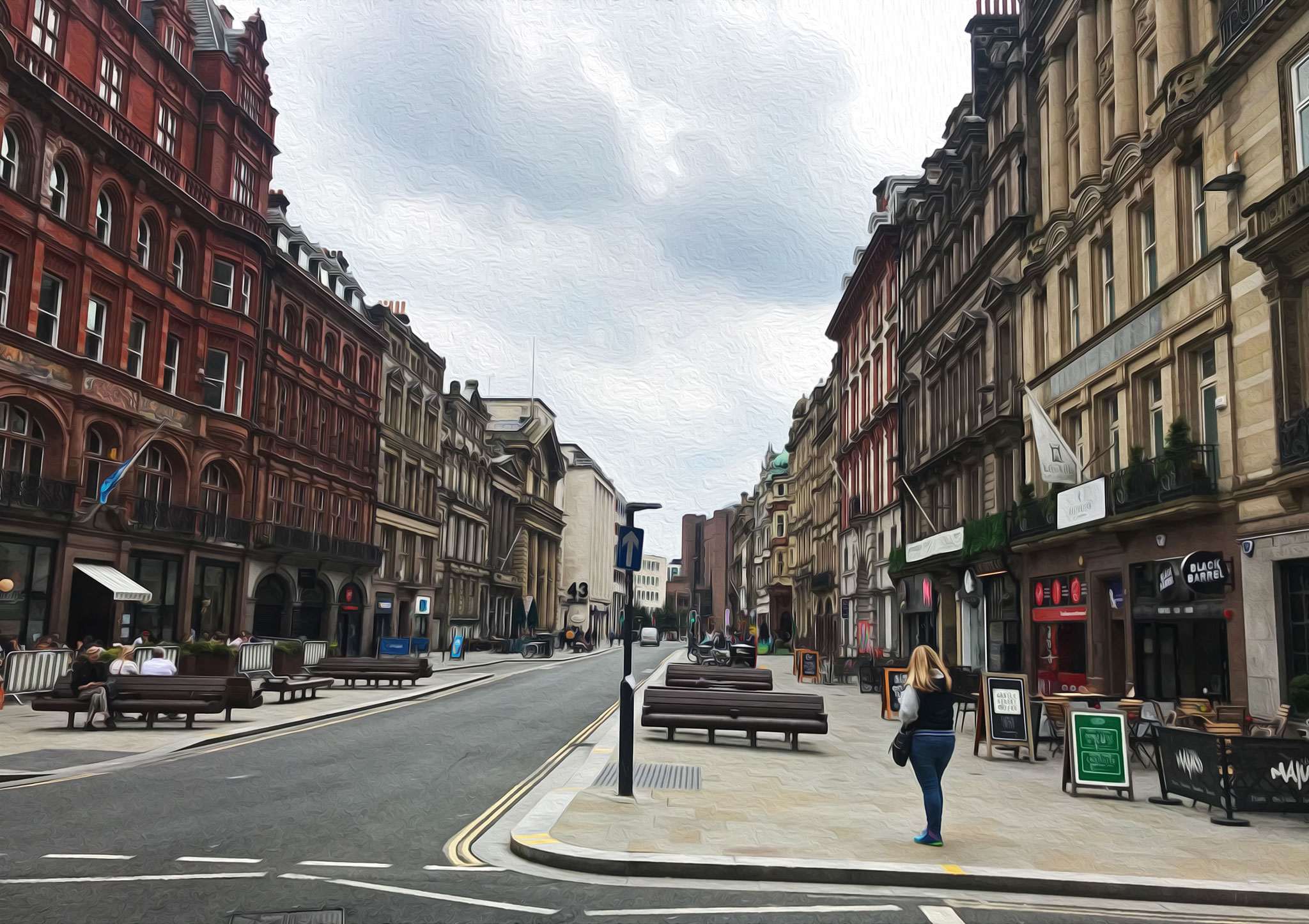 New building complexes, renovations and refurbishments, which in all has influenced its vibe and atmosphere. And, if I am to judge from my friends, the city’s and it’s population’s confidence and pride. 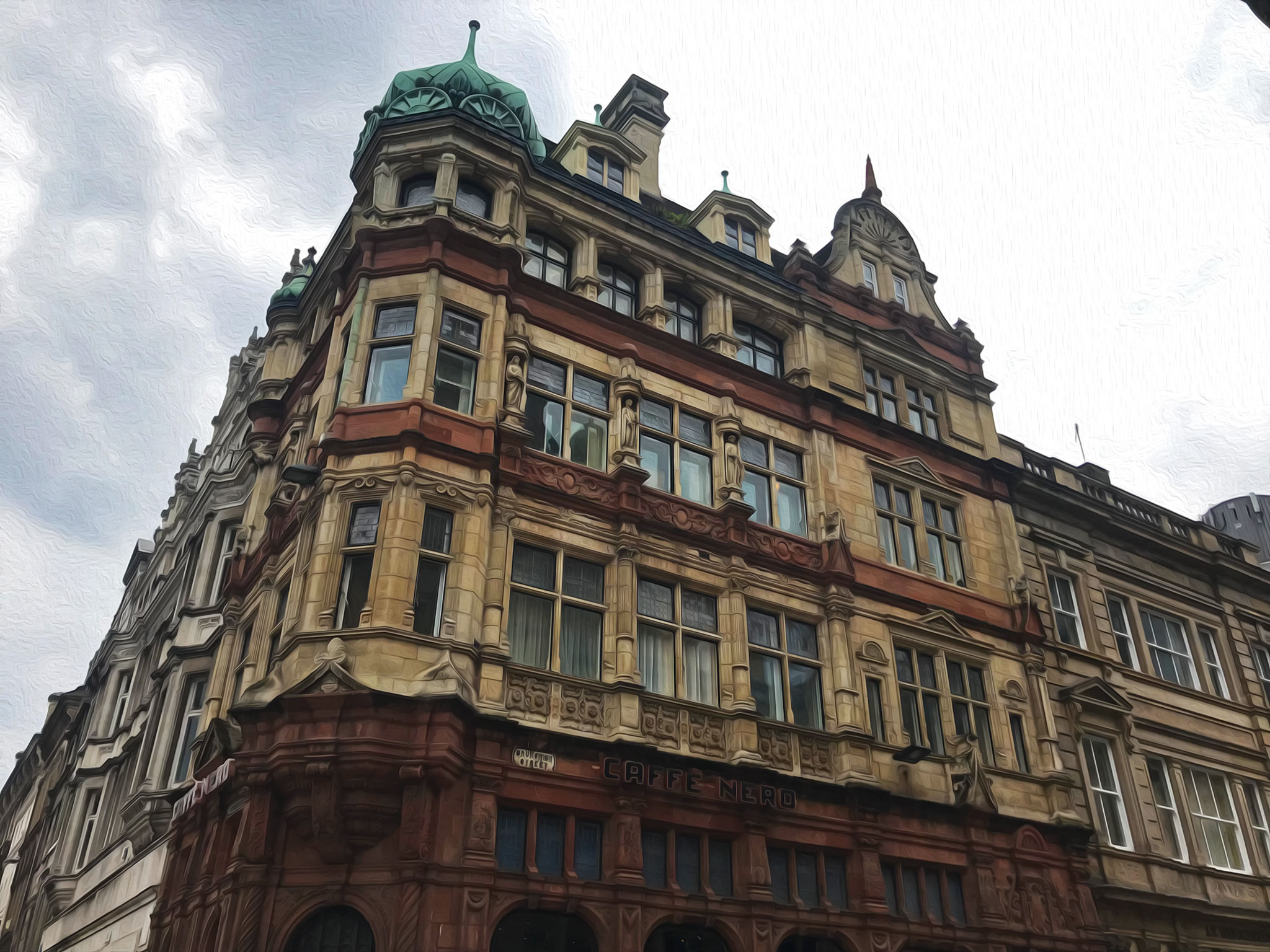 I think they’ve got a lot to be proud of, and I’m not thinking about football teams. Although, for those into football, clearly the success of Liverpool FC hasn’t contributed to lessen the pride of the city. Then you have The Beatles, and countless other musicians, bands and song writers, all coming out of Liverpool. 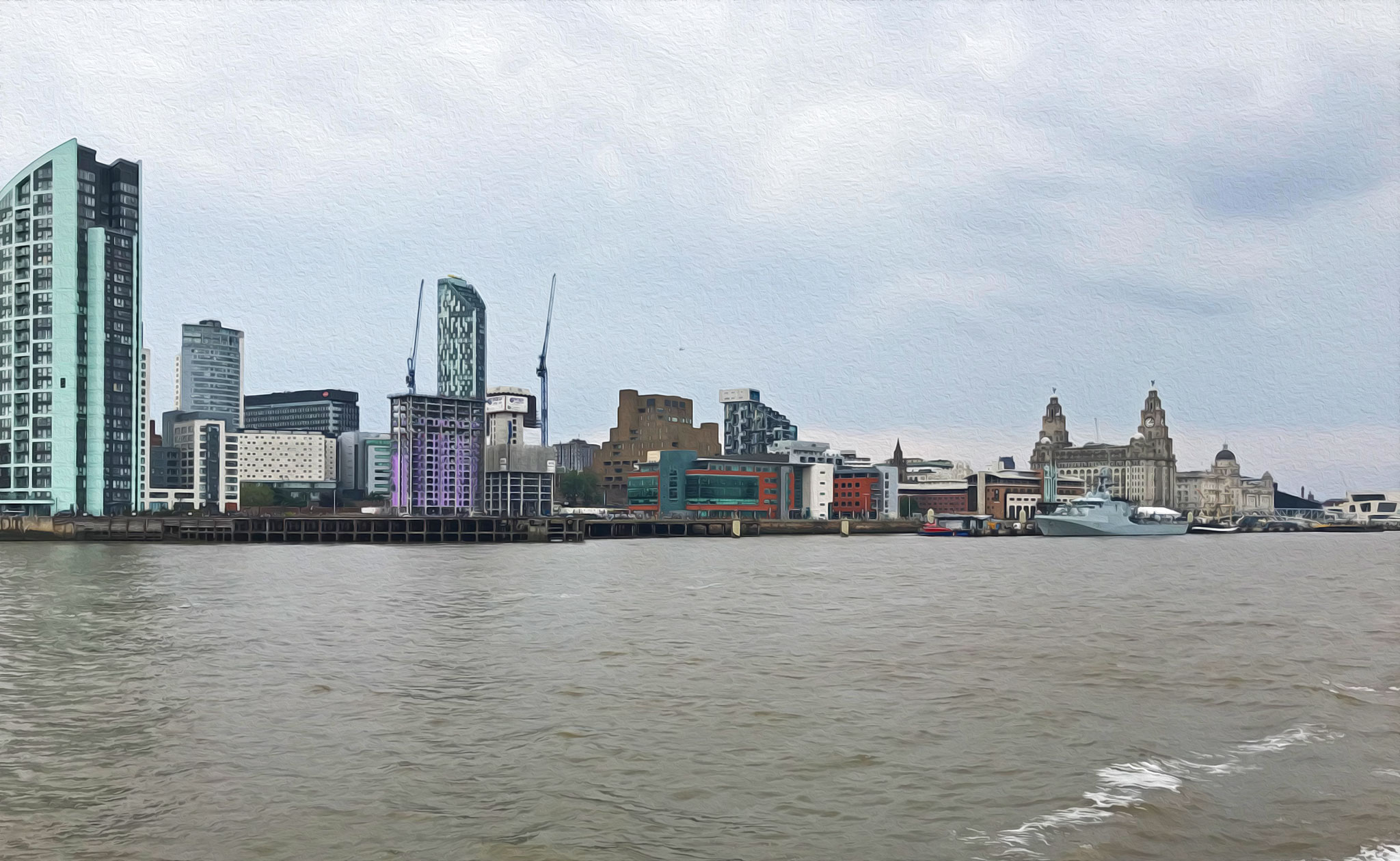 I had a few enjoyable days with my friends, got to see and visit places I’ve been to before, and see something new. Liverpool is really a city one can go back to, again and again.

In the next blog post; Wales and Snowdonia National Park.