Wales was my next goal. I had seen a lot pictures, read a lot about Wales, the beauty of the landscape.  Finally it was my turn to experience the region.

Left Liverpool in the morning, at first it looked like the weather was clearing up, but my hope quickly waned. Soon enough it started to rain. 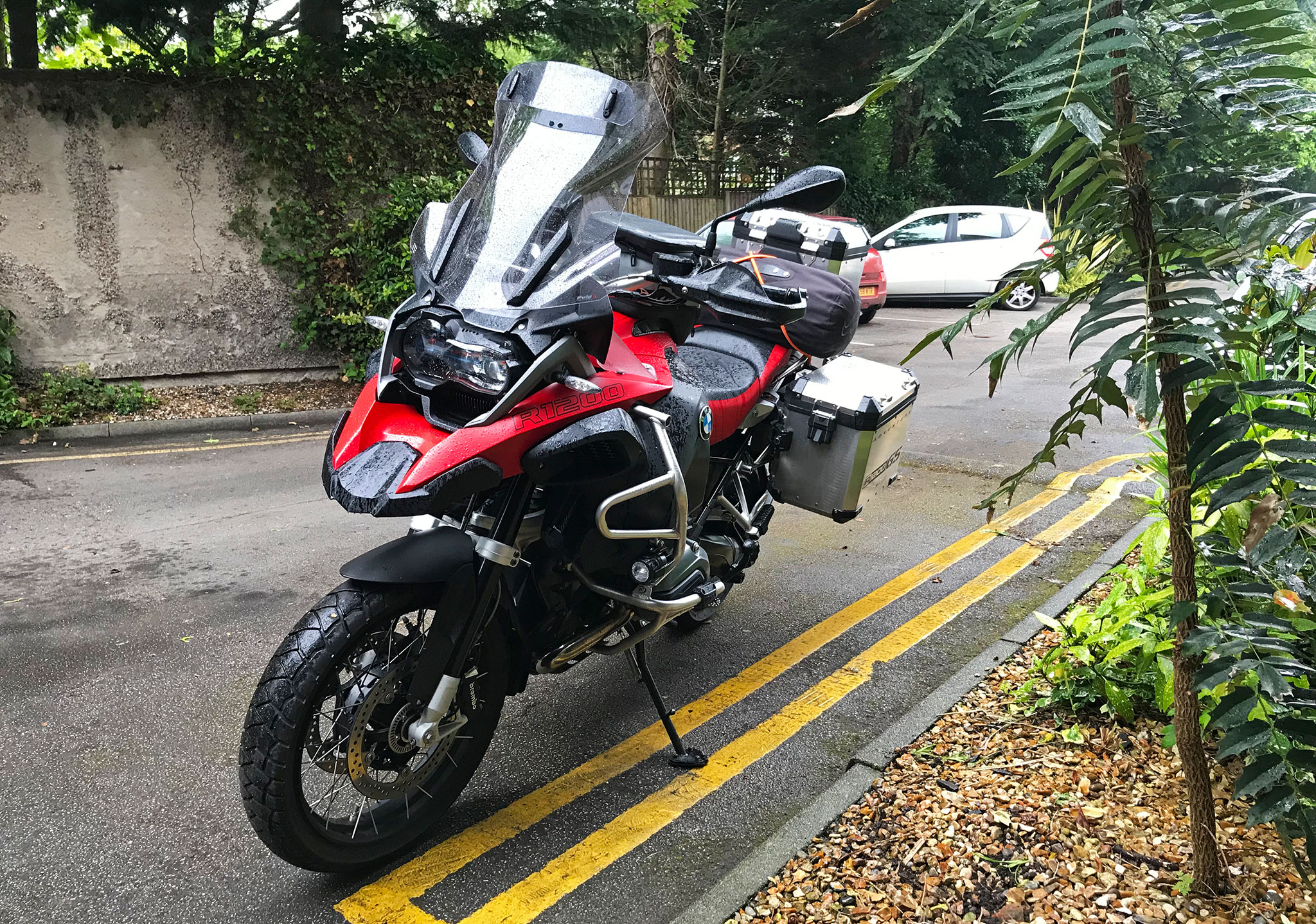 Bike packed and ready for departure in Liverpool

It wasn’t too bad, but a check on the forecast told me it would last for the better part of the day. Well one can’t be bothered, or else there might be less adventure, and more sulking.

From Liverpool I took A562 past Runcorn, in direction of Widnes, then hopped on the M56. in direction of Conwy and Wales. But it got too damn boring. Shortly after entering Wales I took off from main the road, actually called Welsh Rd. It was raining lightly, hoped that would be it, light rain. 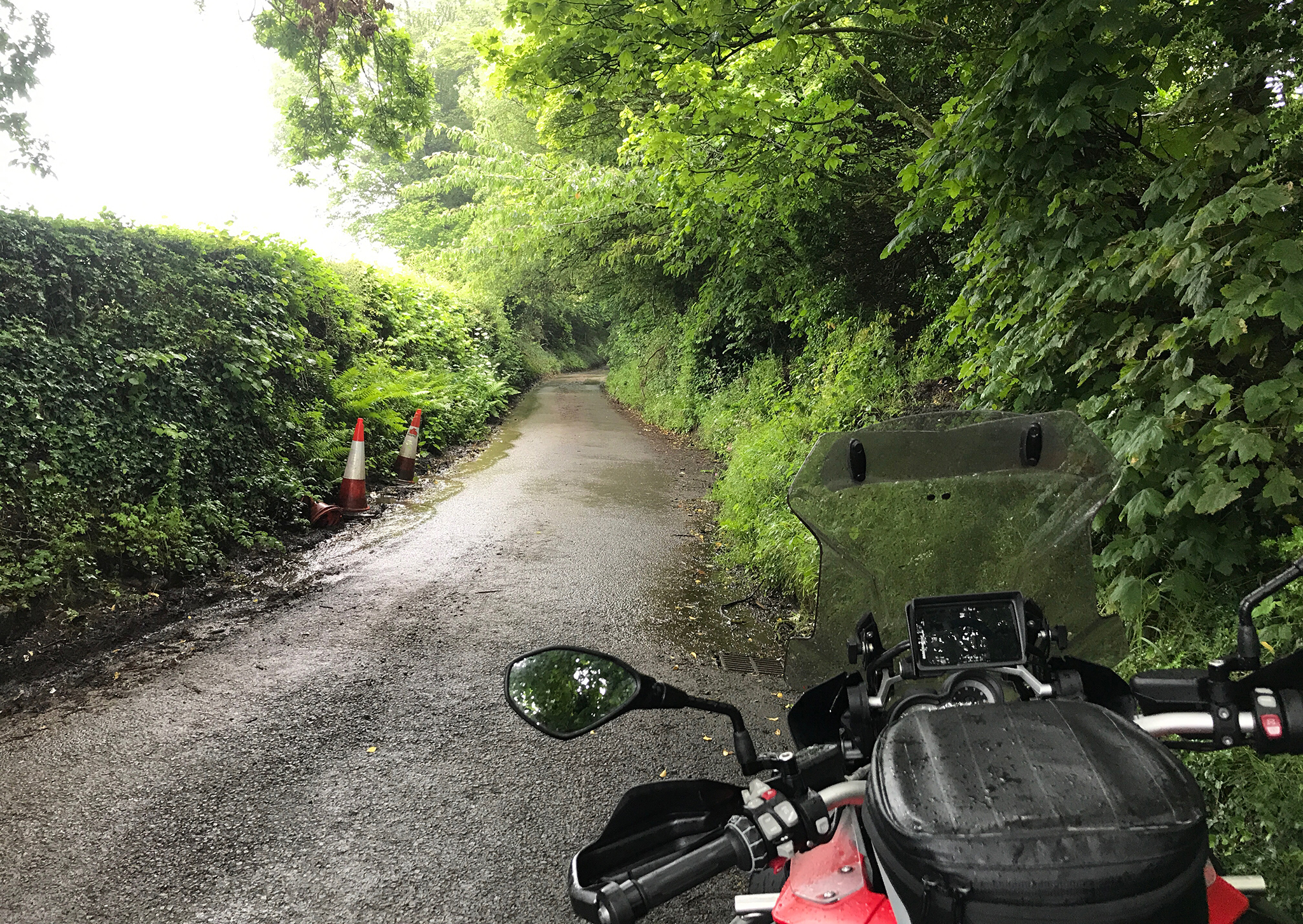 Getting adventurous I did find small roads, in fact very very small roads. Cornist lane was one such. Not only small. but overgrown, with lots of trees, and tall hedges on both sides. On roads like these it goes without saying you keep your pace, and speed, down.

Turned out to be a very sensible thing to do. A few miles up the lane I met a tractor. It came “out of nowhere”, quite typically. In-between us was a pocket, allowing us to pass each other.

A hand gesture accompanied with a nod from the tractor driver suggested I’d tackled the road and the challenge the right way. Wales is an exceptional lush experience, a symphony in green. The small roads runs like tiny veins through the landscape. Because of the density of trees, hedges and bushes, sometimes leaning over the roads, you cannot see very far.

If you ever ride into Wales, and like me do small roads, mind your speed!

Noon’ish, wrapping up my first little detour in Wales, followed the B5381 onto the main road into Conwy. The city was originally built on the instruction of Edward I of England, as part of his conquest of the principality of Wales. 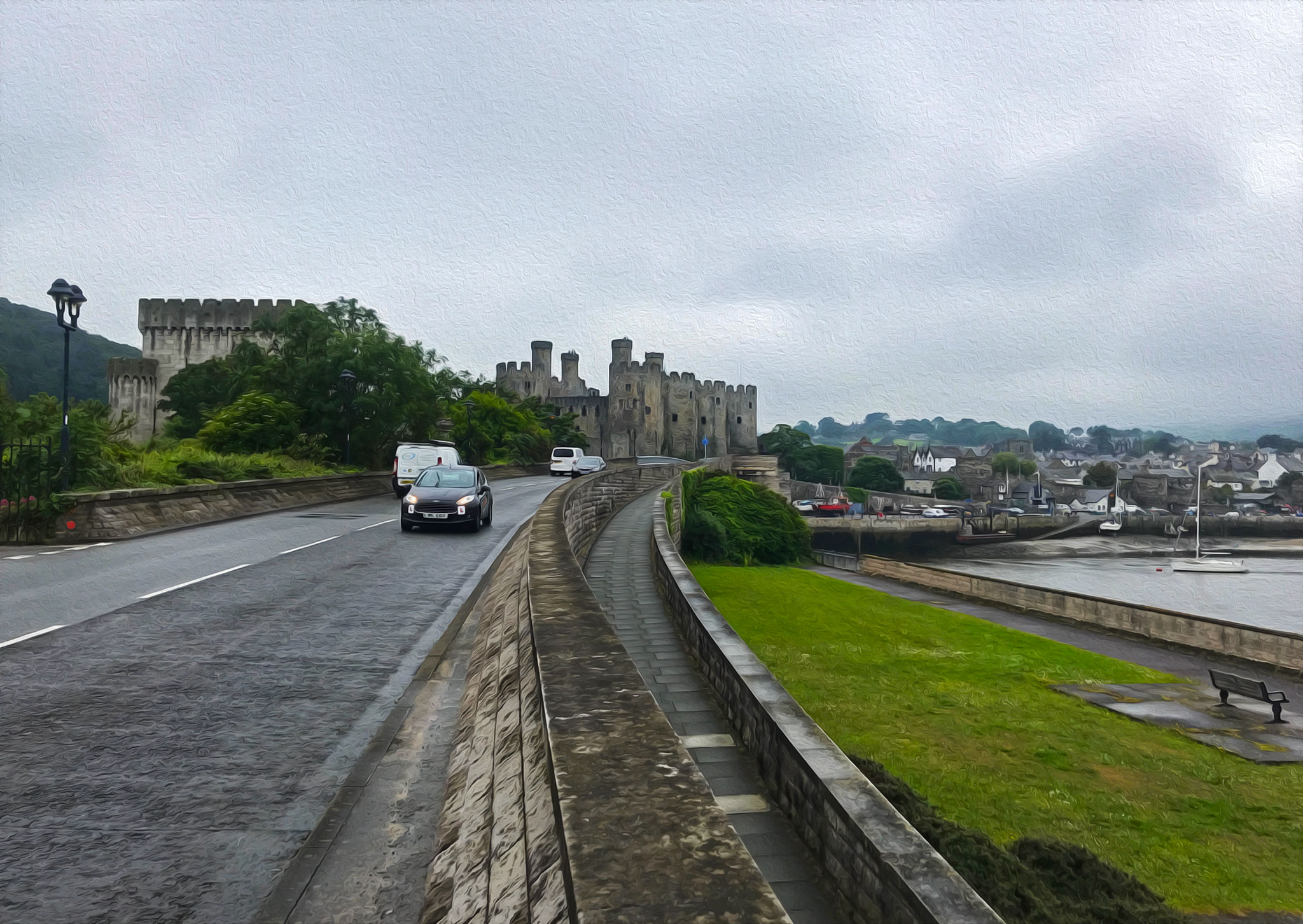 It’a a charming little town, quite a lot of tourists wandering about and to the castle.  Most of the traffic was around the castle itself, so I looped through and back into the main streets further down towards the coast. 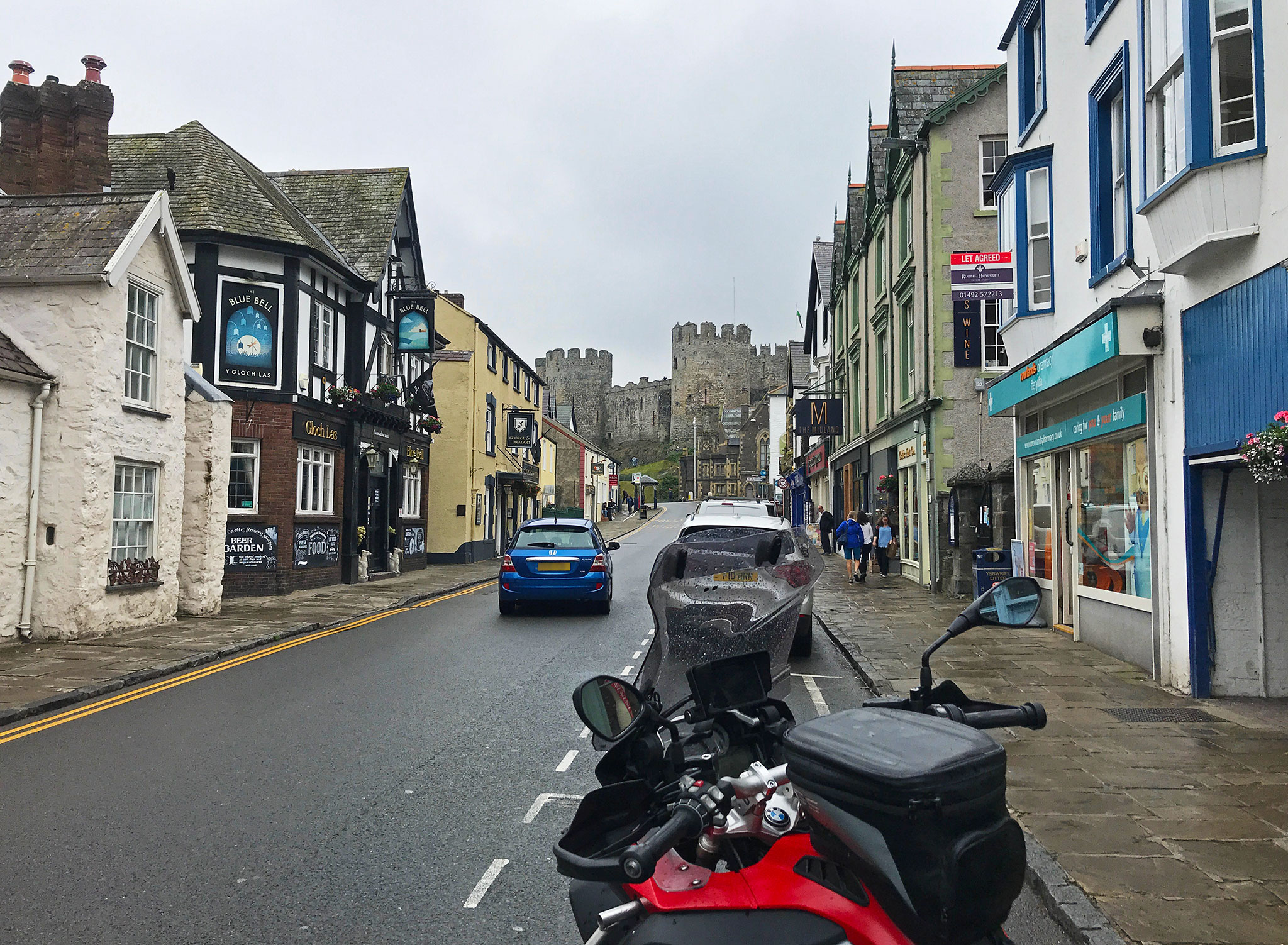 I was getting a bit peckish but decided to postpone lunch and look for a place outside of the city. Before leaving Conwy rode down to and along Conwy quay. In Lower Gate Street you can, among other sights, also stop by the Quay House, also known as  the smallest house in Great Britain. 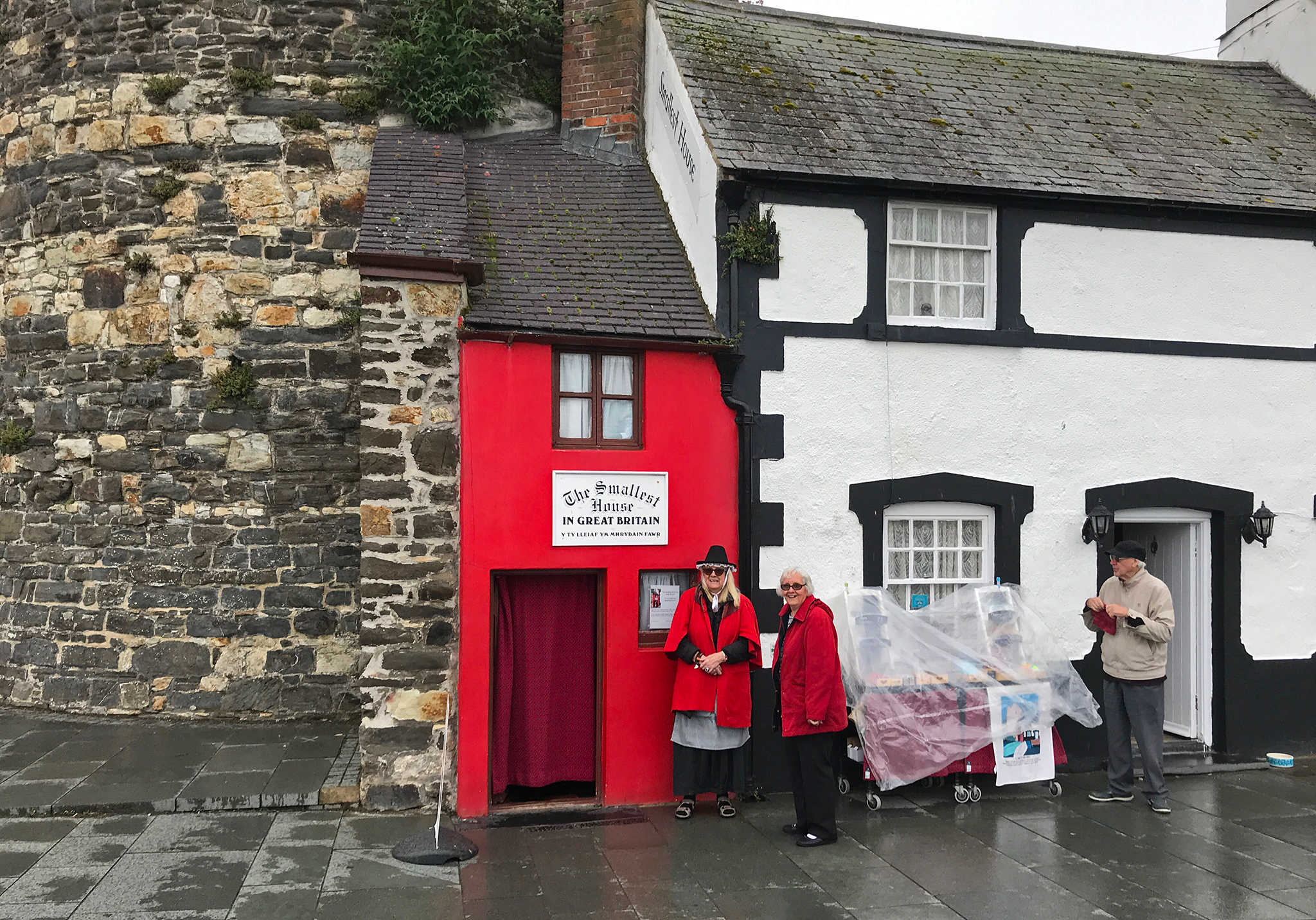 The Smallest House in Great Britain, or the Quay House, Conwy

This minuscule home was created in the 16th century and remained in use until 1900. It has a floor area of 10 by 5.9 ft, or 3.05 by 1.8 meters. As the last tenant was a fisherman standing 191 centimeters tall. I think it would be fair to assume he’d suffer badly if he was a claustrophobic!

I couldn’t first quite make up my mind about whether to take a coastal route, or head inland. It was raining, and grey. As a result I decided to head inland, and hit on the Sychnant Pass Road which leads up to, and across, you guessed it right (!), Sychnant Pass.  The only pass I have ever ridden with stone walls on either side. 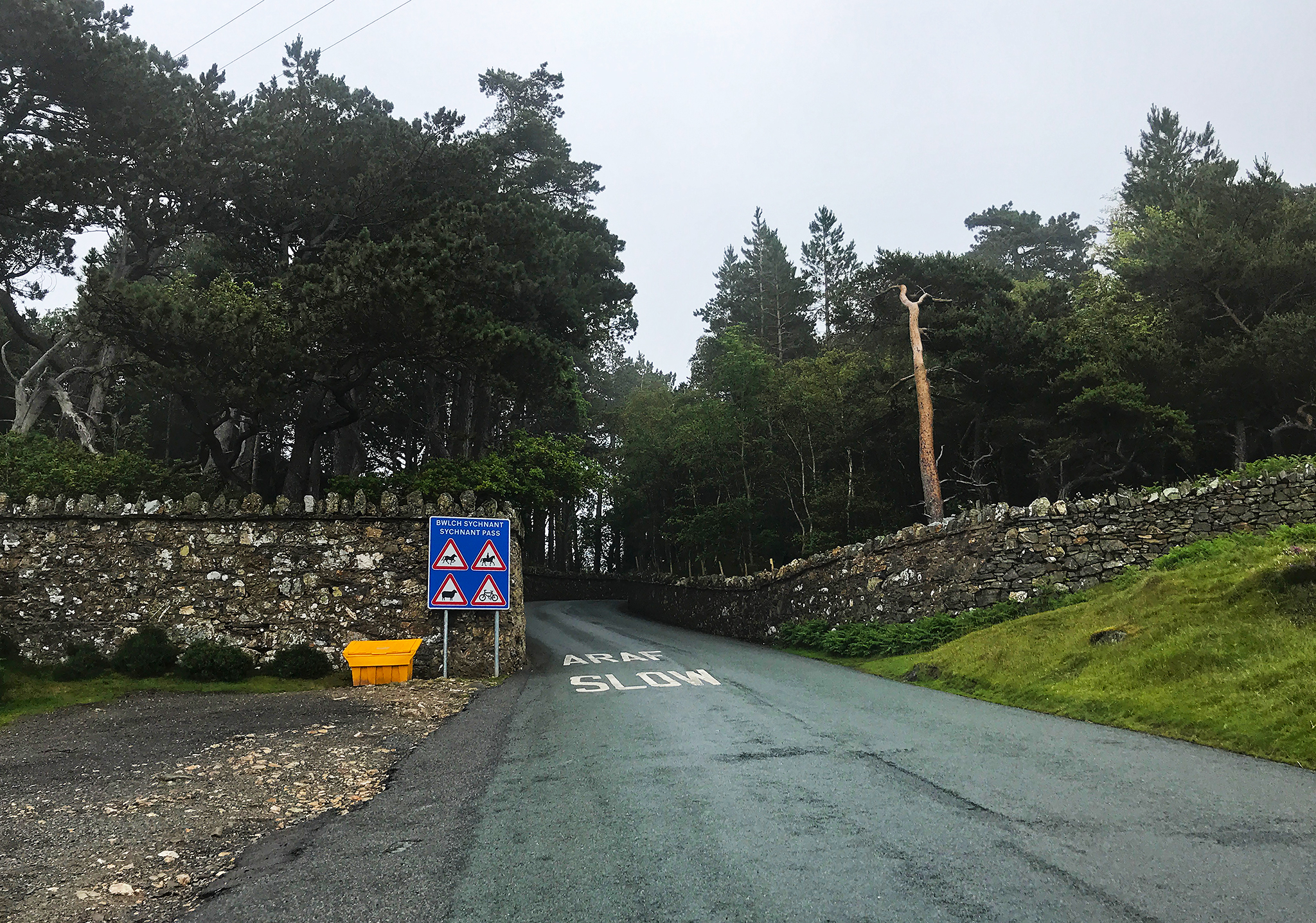 Although it’s called a pass it’s not very high up. I seem to recall, around 256 meters actually. Welsh passes are something else than the typical passes you find in, among other places, The Alps. 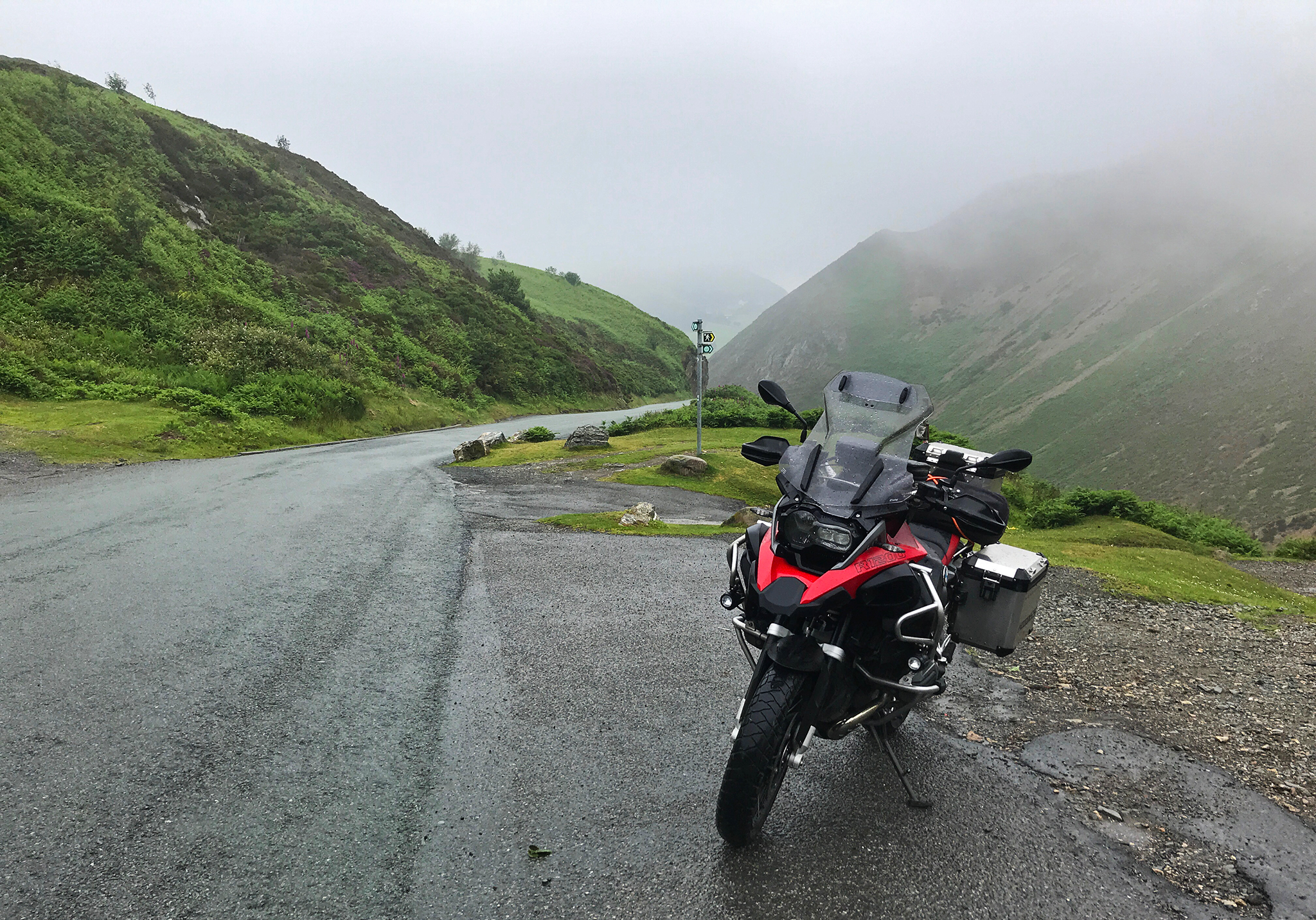 Still, as Wales and Welsh landscape go, a pass all the same. The hills were cloaked in fog which gave a feeling of being much higher up than I really was.  It was now high time for lunch.  I stopped in Penmaenmawr at the inn Fairly Glen for a bite before continuing south.

While lunching I had a closer look at the map.  To get into Snowdonia National Park the only alternative was to ride along the coast and then choose an eastern route. So I took the A65 southwest down in direction of Bangor, then off on the Felin Hen road which eventually became A4244.

The landscape in Wales simply is something else, with its rolling hills, mountains and lakes. At Brynrefail I took the A4086 along lake Llyn Padam to Llanberis. 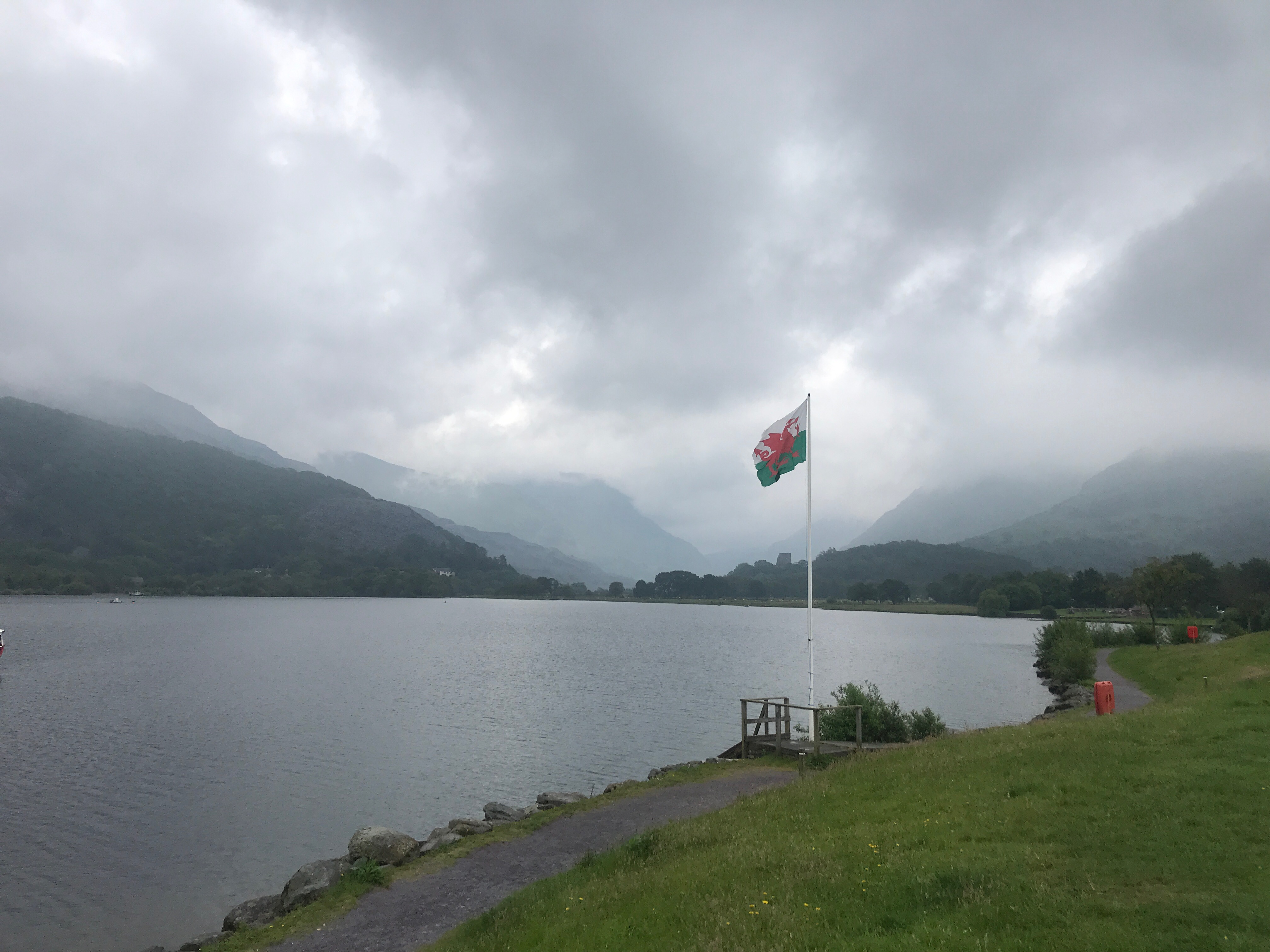 Llyn Padam, Llyn is lake or pool in Welsh

This road then took me up to Pen-y-Pass which is in Snowdonia National Park. Unfortunately thick fog hung over the pass and mountains, offering mere glimpses of the natural beauty of the area. 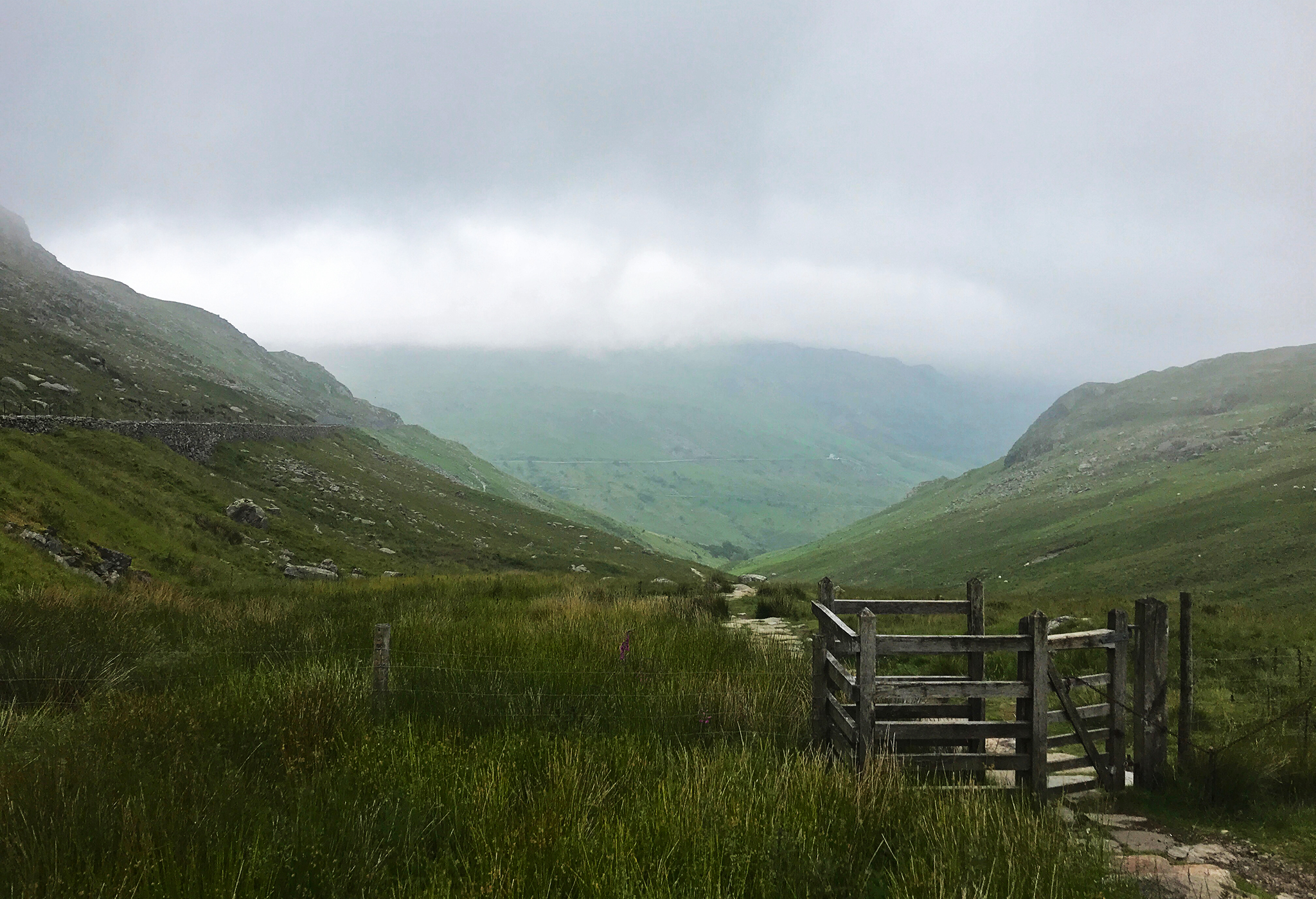 A friendly tour guide and parking attendant told me there was a chance for the fog to lift.  I thought about staying for a while, see if the weather would clear up, but instead decided to soldier on and hope for a change. 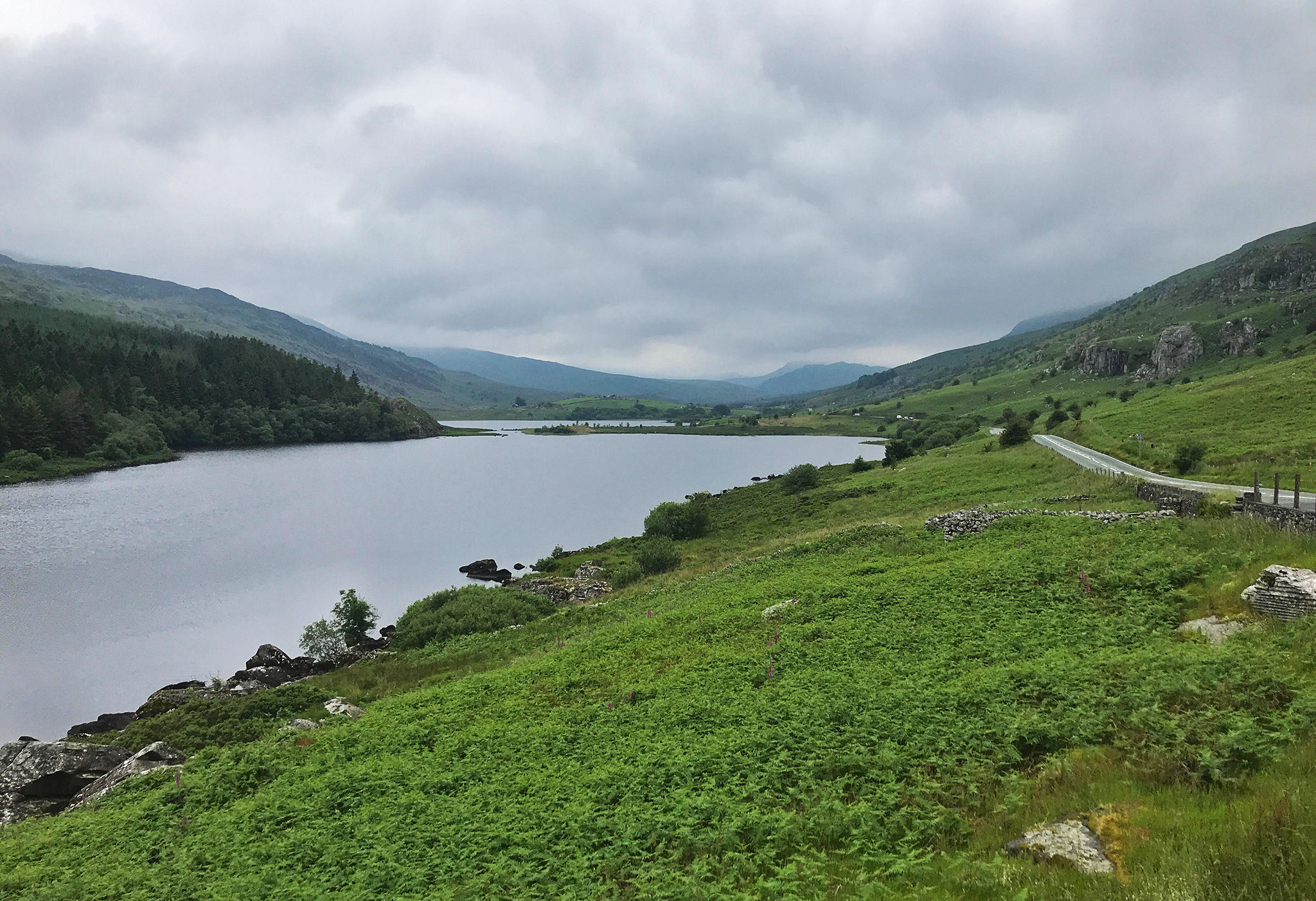 Coming down from Pen-y-Pass and the mountain I first headed northeast towards Capel Cruig. But the further east I got the more the rain picked up. So I turned around, went back the same way, past the Pen-y-Pass intersection and continued along A486 south towards Nant Gwynant and Llyn Gwynant. 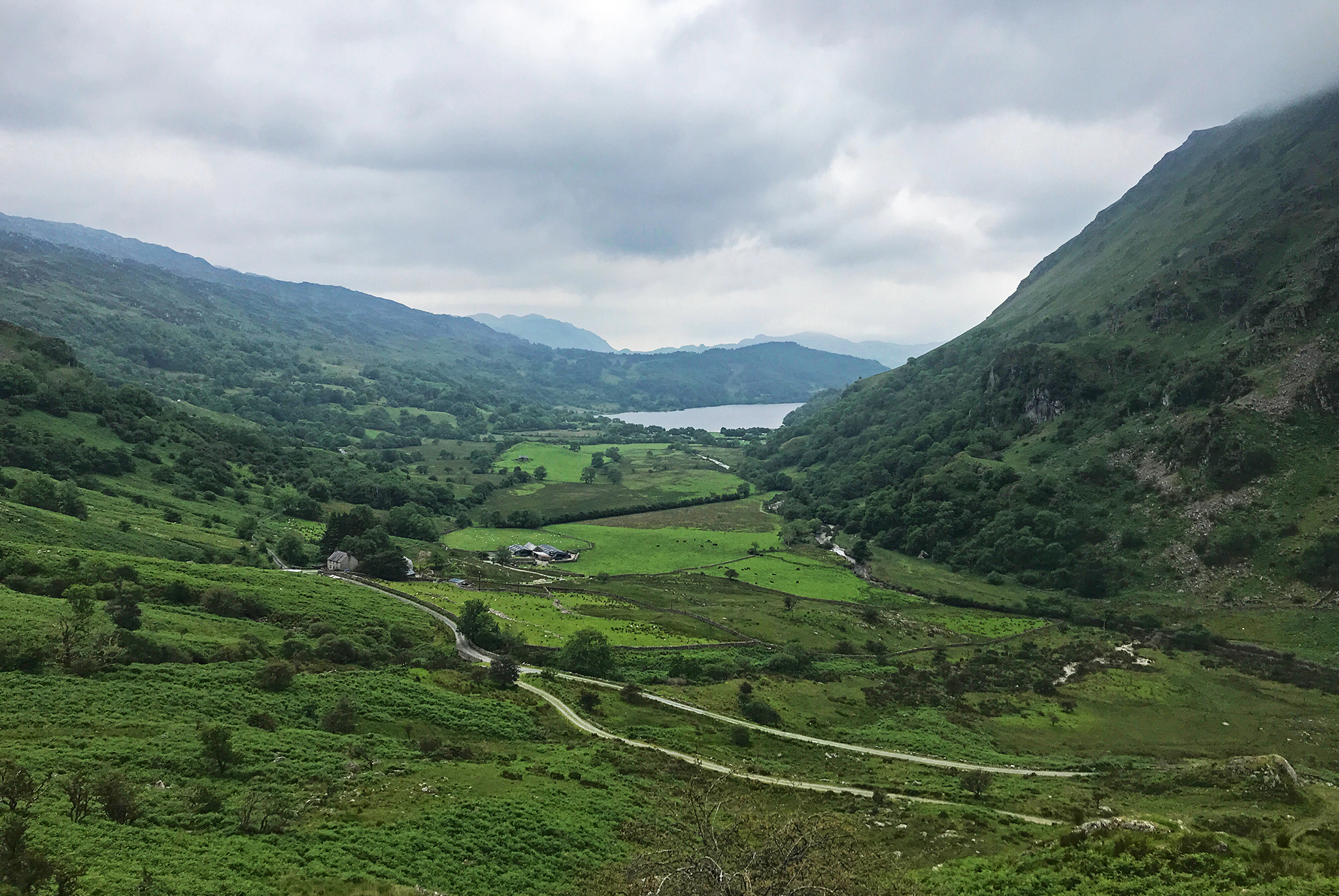 Despite rain that didn’t seem to want to stop, fog and low hanging clouds, the scenery had something enchanting, almost medieval about it. To call the experience magical would perhaps be to go too far, but it really is something else. 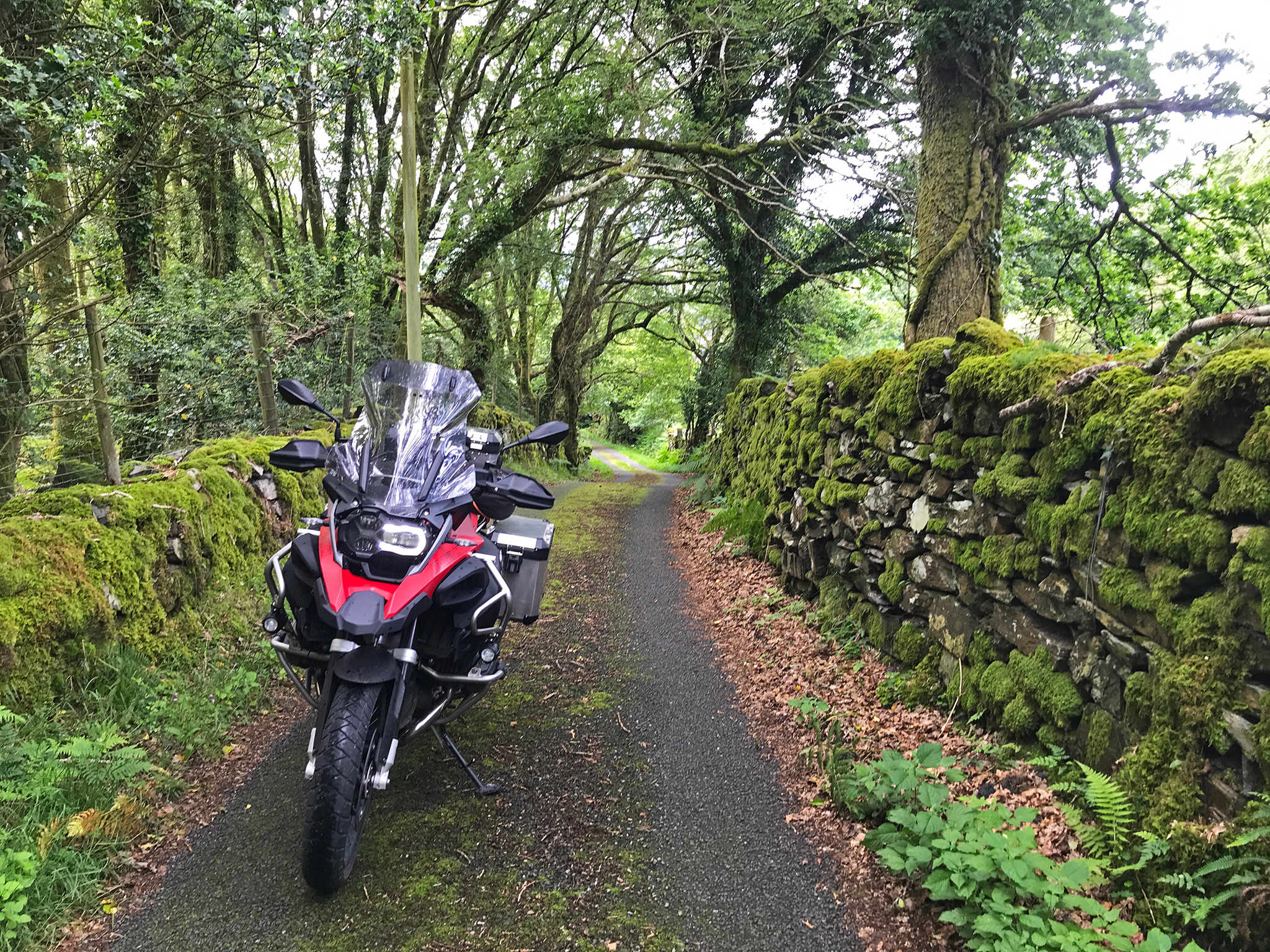 I continued southwest, had no specific plan but as it cleared up a bit decided to try some smaller roads. Indeed I found some smaller roads,  the sort that I guess only local farmers use. All of them with pavement, with treacherously slippery moss. 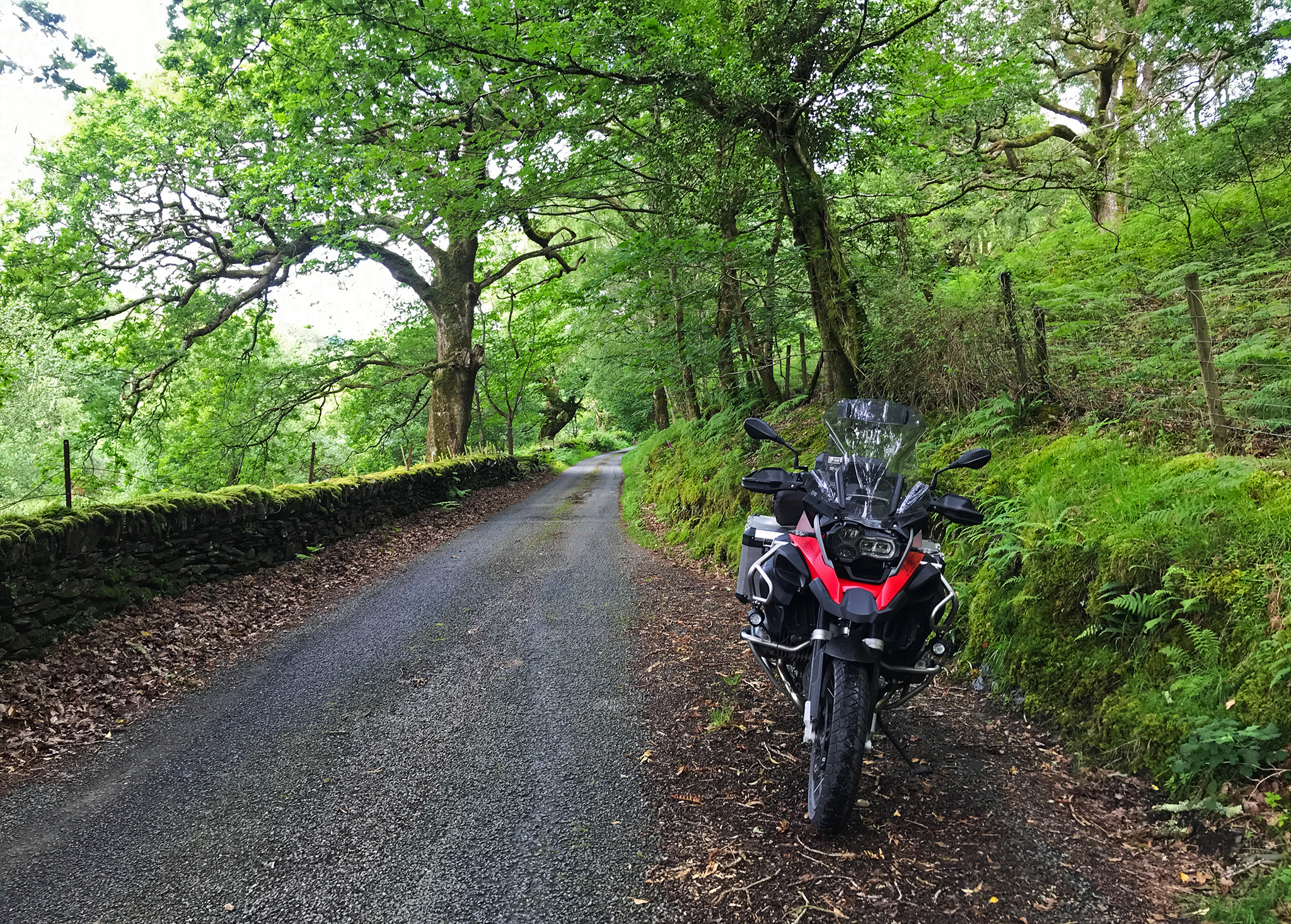 Small roads riding, sometimes it pays not to have a plan!

Fortunately rain had now stopped, and the roads were slowly drying up, making the riding quite enjoyable.

Across mountains, into valleys

Free-riding, riding without a distinct or specific plan, can be very rewarding. Plus of course, sometimes a necessity, to avoid or get away from rain and heavy rain showers.

Around Penrhyndeudraeth I went back on slightly bigger roads, took a more eastern course.  It seemed to clear up the further east I got. So east it was, at least for a while. 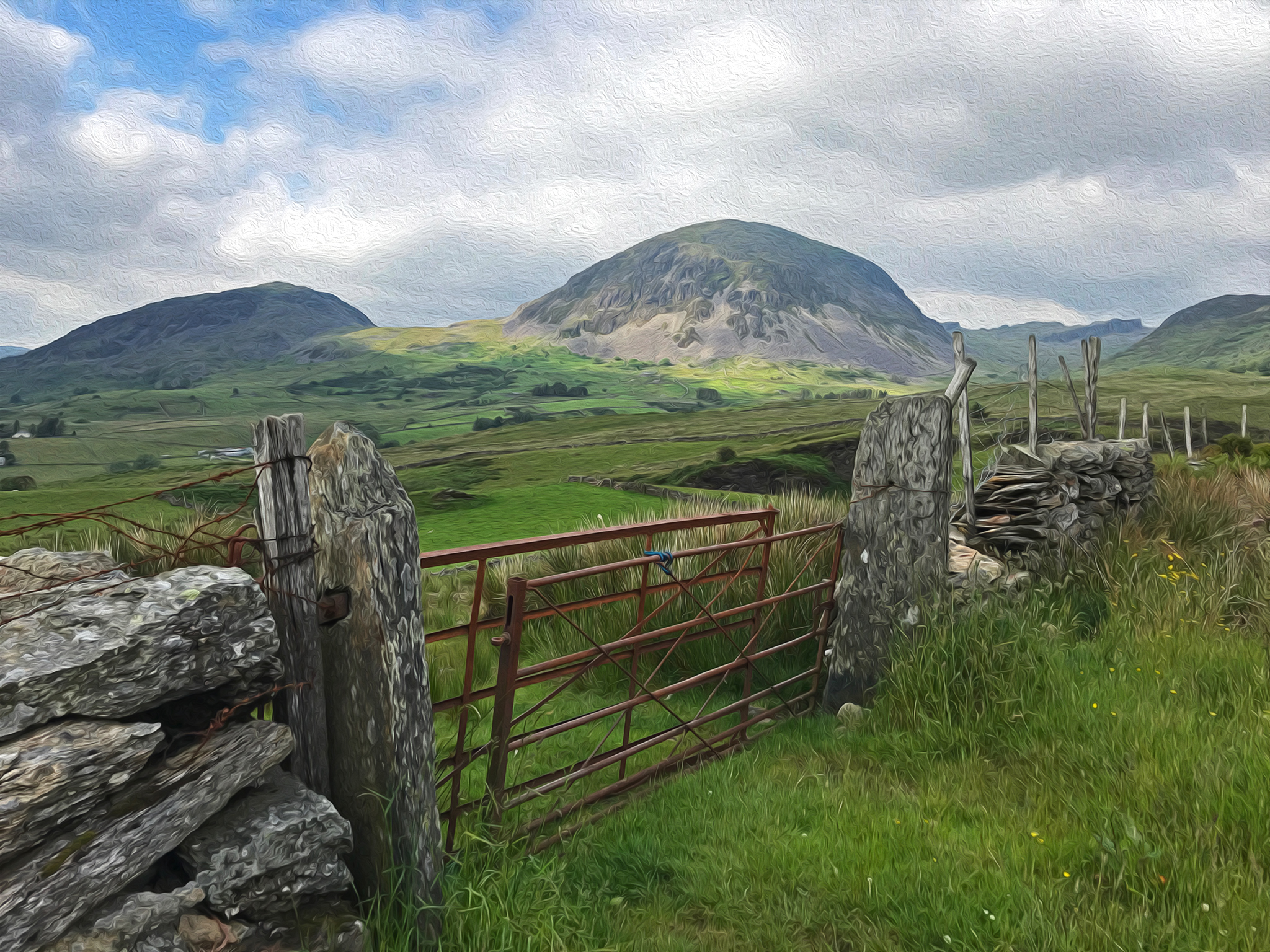 Welsh mountains in all their glory

in Ffestiniog I took off the bigger road  onto B4391, which led me up into the hills, while offering the above view.  What a magical landscape! The small road led me onto A4212 leading me south again to Llanfor. I rode along Llyn Tegid to Llanuwchllyn, then spotted an interesting little road leading up alongside some hills. 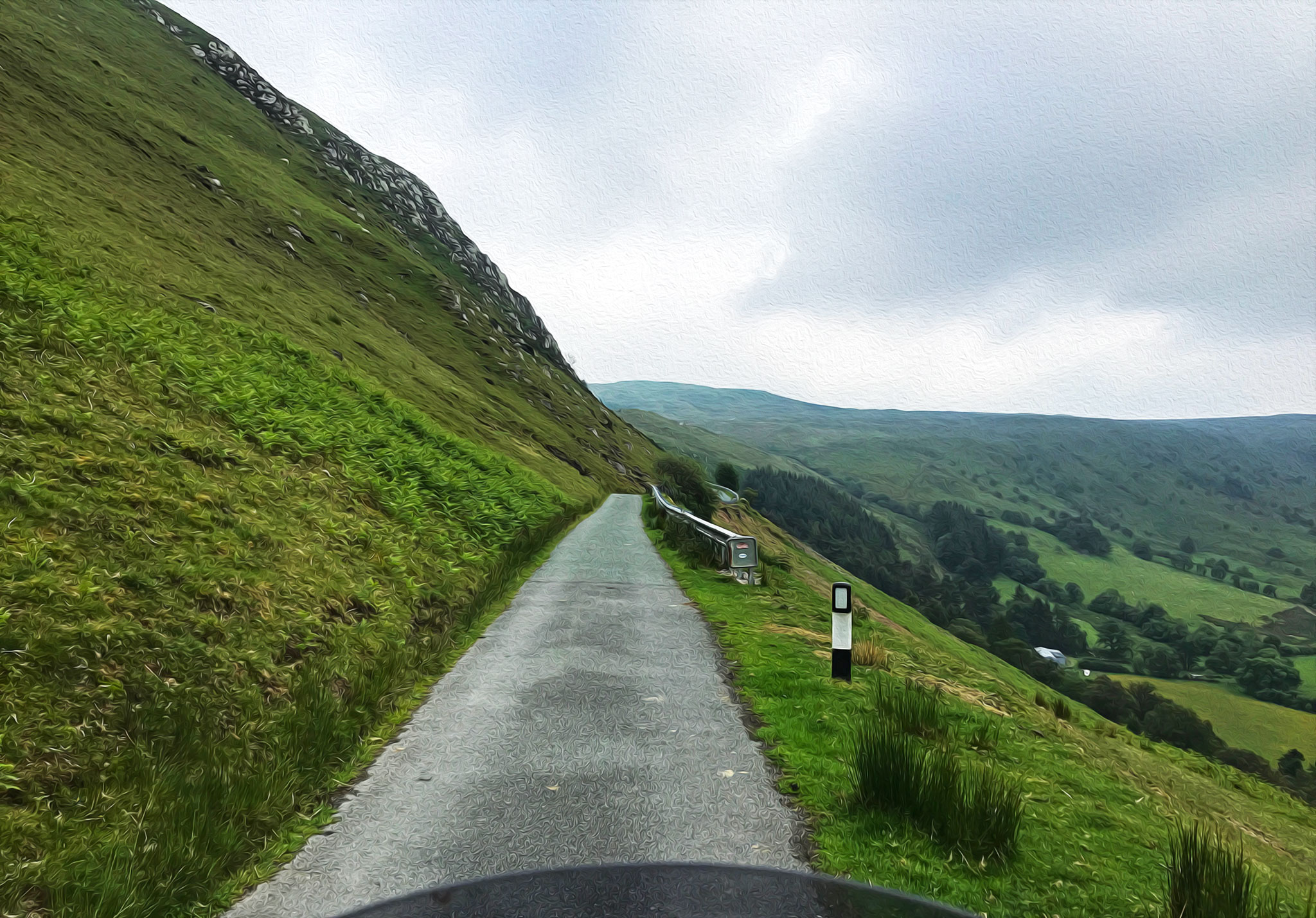 At Pont Ty-nant the road really got interesting!

The first section went slowly up, through woods, past farms. Then it forked into a lower which seemed to lead into the valley, and a high leading up. I took the higher road,  which around Pont Ty-nant rewarded me with the above.

Meeting cars or even tractors on this road would have been interesting. It was getting later in the afternoon and I saw no cars, no tractors and no people.  The road continue to climb up, leading over the moors or mountains.

Right before diving down into the valley and Llanymawddwy village, there’s a crossroad where you can take off towards Lake Vyrnwy reservoir. 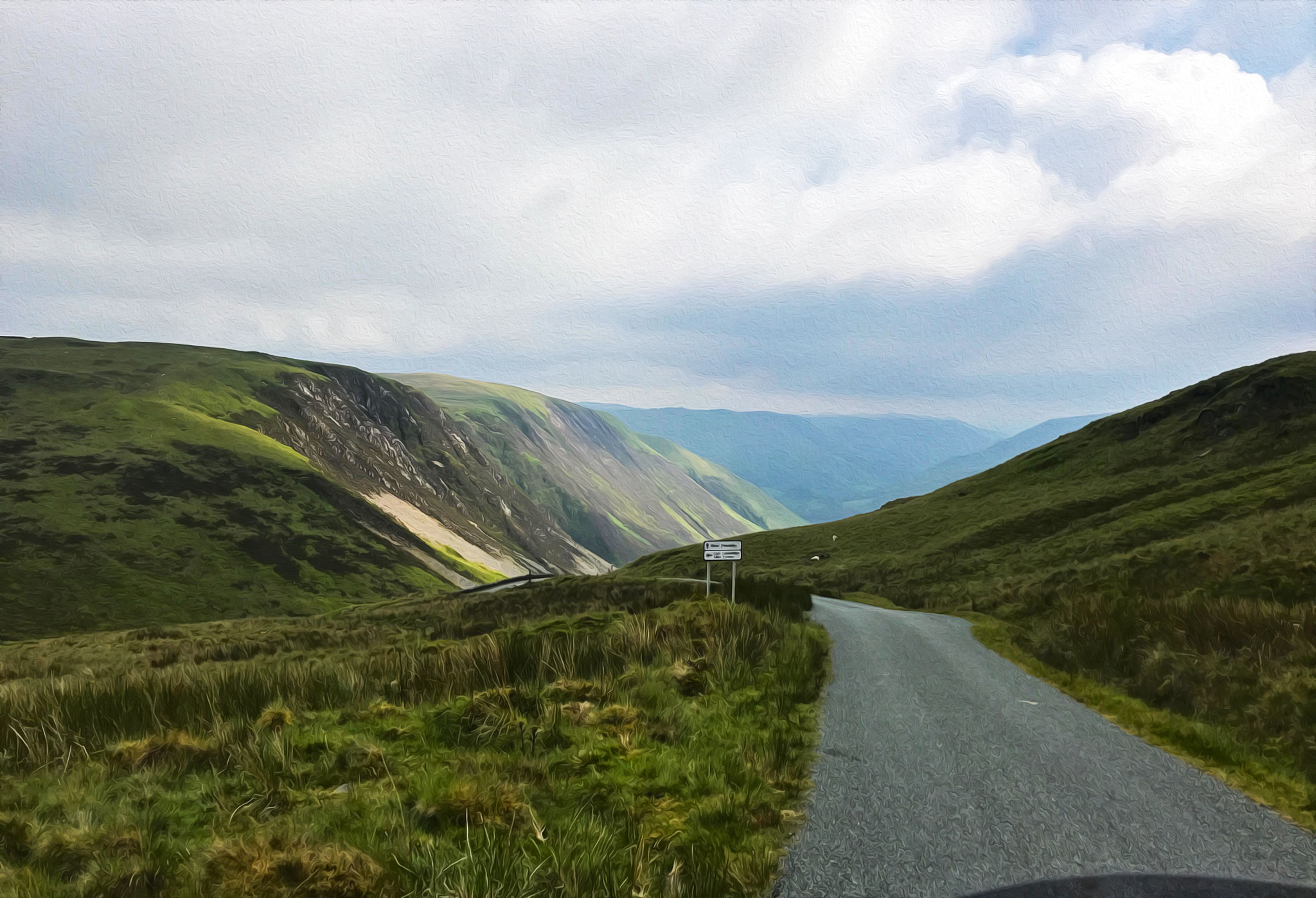 Up ahead: left to Lake Vyrnwy, or right to Llanymawddwy

I thought about going to the reservoir but late afternoon had become evening, and I hadn’t made any decision about where to stay for the night.  And I very much felt like getting something to eat, plus a pint or two. 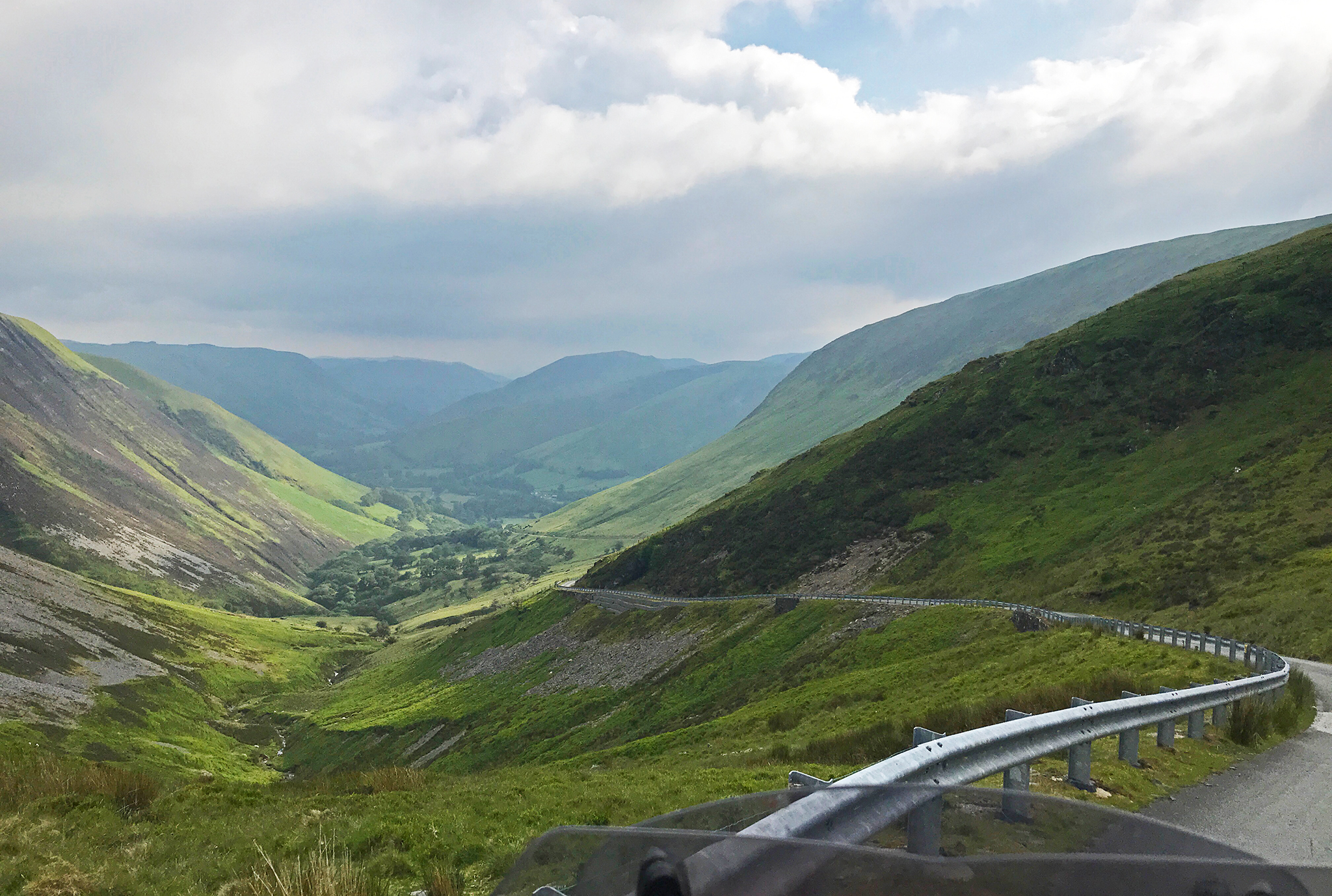 The road down towards Llanymawddwy

The stomach won the “battle”. I took the road down towards Llanymawddwy, further down the little ended into the A470. Coming down towards a roundabout in Mallwyd I spotted a white, inviting building on the left side, with a sign on the wall saying “Brigands Inn“. 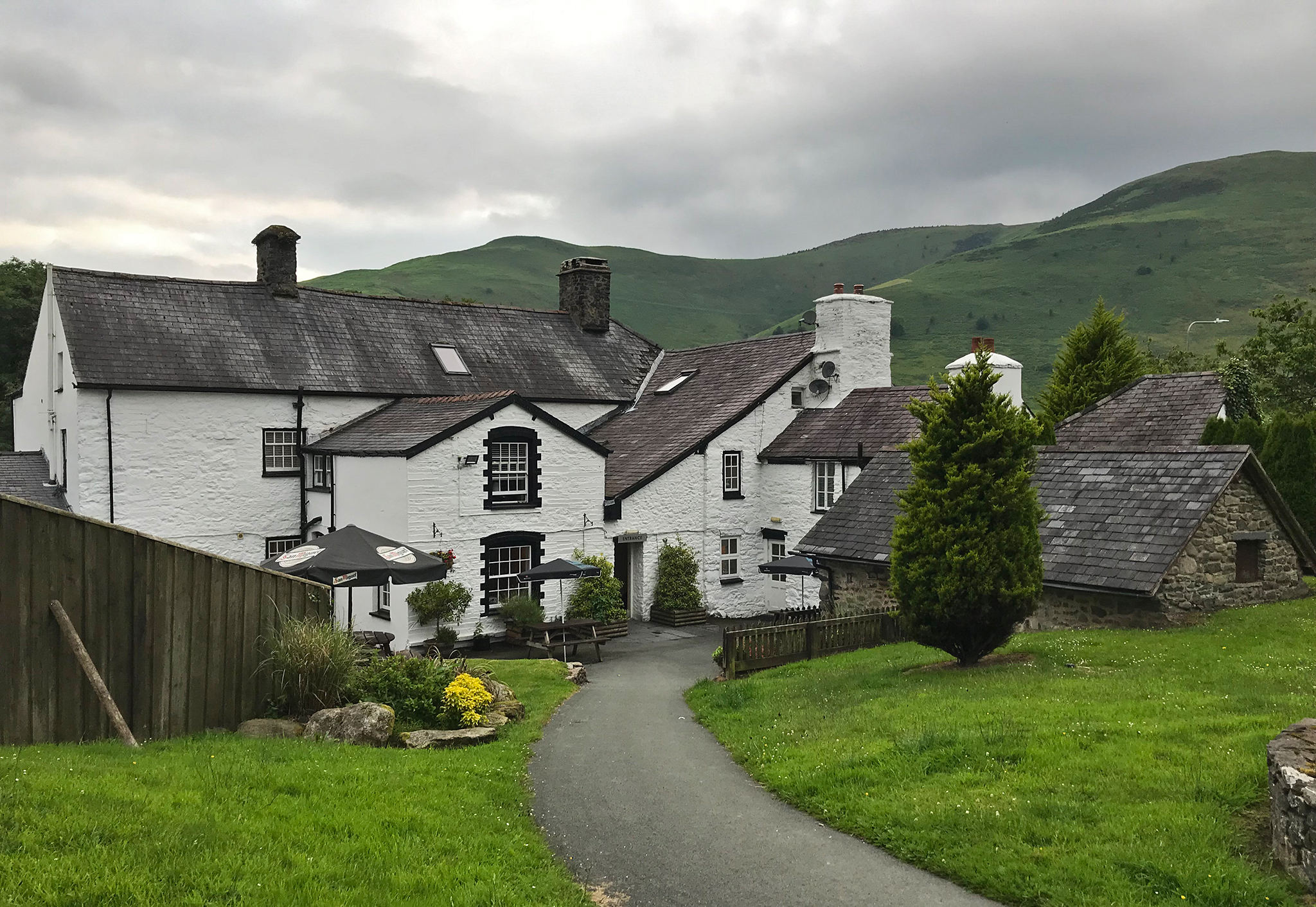 The Brigands inn, seen from the rear side

Having made no reservations I stopped and asked if they had any vacancies, which they had.  I got a great, room for a decent price, breakfast included. 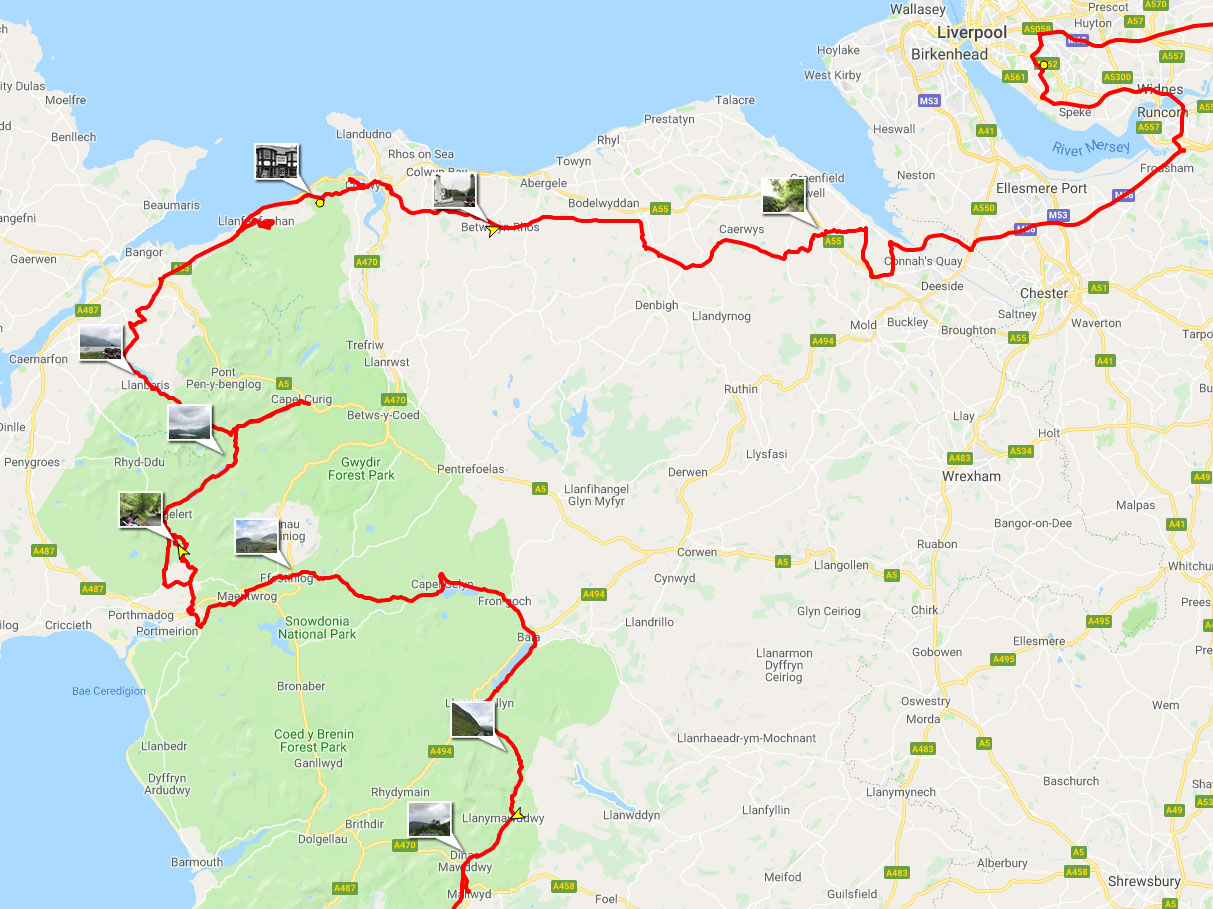 My route through North Wales

Thus a long riding day ended. I was now at the edge of Snowdonia National Park. The next day I would carry on to South Wales and Brecon Beacon National Park, then west.

West to where? That you may find out in the next post.