The county consolidation have reduced the total number from 19 to 11. You can read more about it here. The change has annoyed a considerable part of the population. In some regions/counties much more than in others. Well be that as it may, and now back to the topic.

Vestland, by a part of it

Our base was in Vassbygdi,  a small place ca 15 minutes southwest of Aurlandsvangen. Latter the main town in Aurland municipality. Aurlandvangen is located on the south side of the Sognefjorden. Or more correctly, by Aurlandsfjorden, which a southern arm of Sognefjorden. 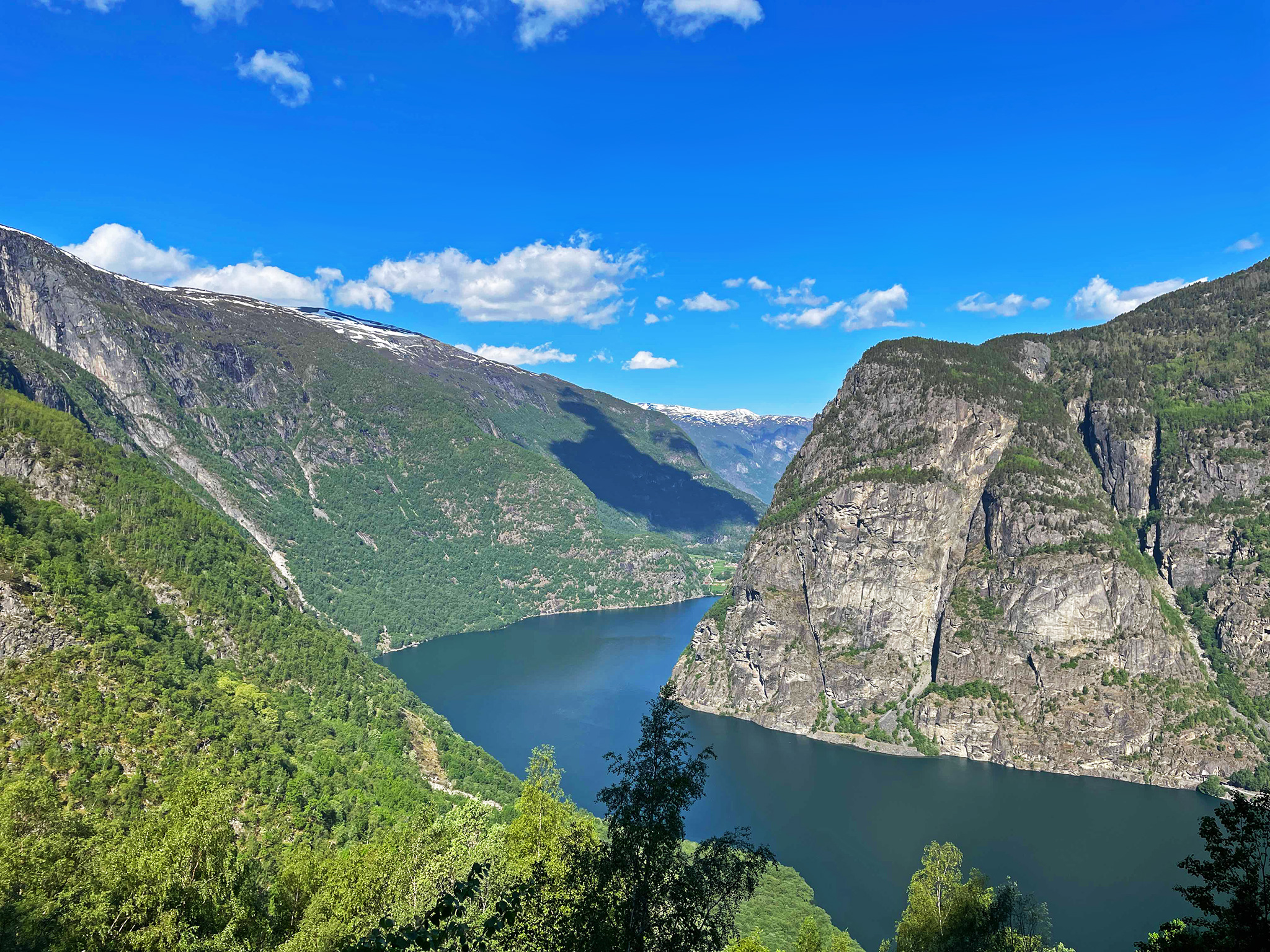 The following day we started by riding up Fv50 from Vassbygdi. The road climbs sharply up the mountainside, and has some fairly dungeon like tunnels. Rather quickly you end up taking in view like above. Fv50 offers easy riding, and will after several tunnels take you over the mountains to Hagafoss, and later Geilo. 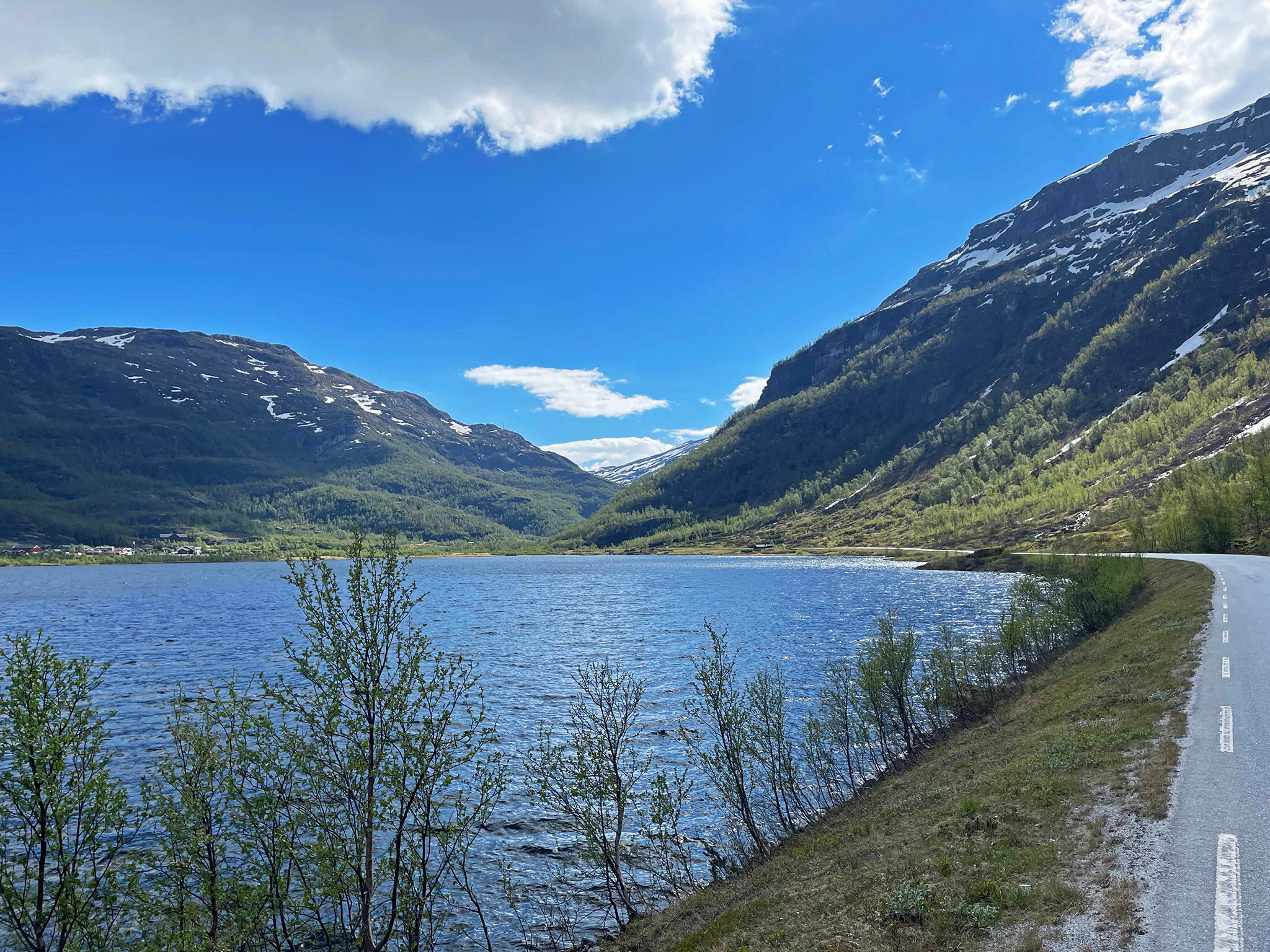 View along Fv50 in Aurland, mountains and snow in sight

Soon enough we were above tree limit, and the temperature had dropped down below 8C. if you plan to visit Norway in June on a motorcycle bring warm clothes and warm gloves.

A little later we made the decision not to carry on. And turned around, rode back down. In Aurlandsvangen my riding companion decided to take a break. I felt like soldering on, so we split up.

I didn’t really have a plan, just felt like riding. From Gudvangen I took the E16 in direction of Vossevangen. It runs through a couple of really long tunnels. Pretty boring riding, well apart from the landscape. Soon enough I found some small roads that made it into a pleasant experience. 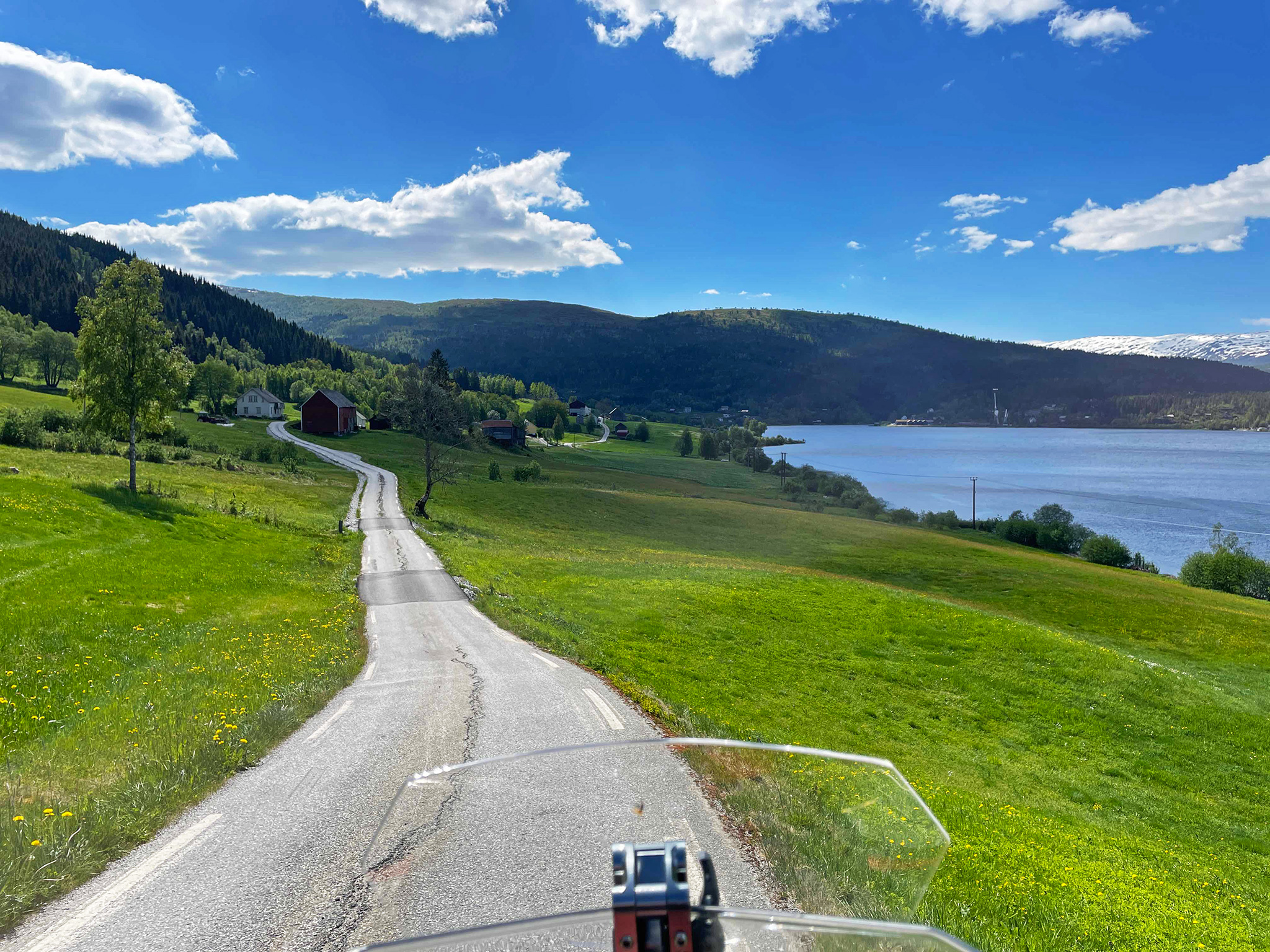 Small roads in Vestland, lake Oppheimsvatnet to the right.

In Vinje I stopped for a coffee and something to eat. Since I was going further west the next day, Rv (National road) 13 in direction of Vikafjell made more sense.  Turned out to be a good choice. Some kilometers up the road, past a ski resort and village I was greeted by the below scenery. 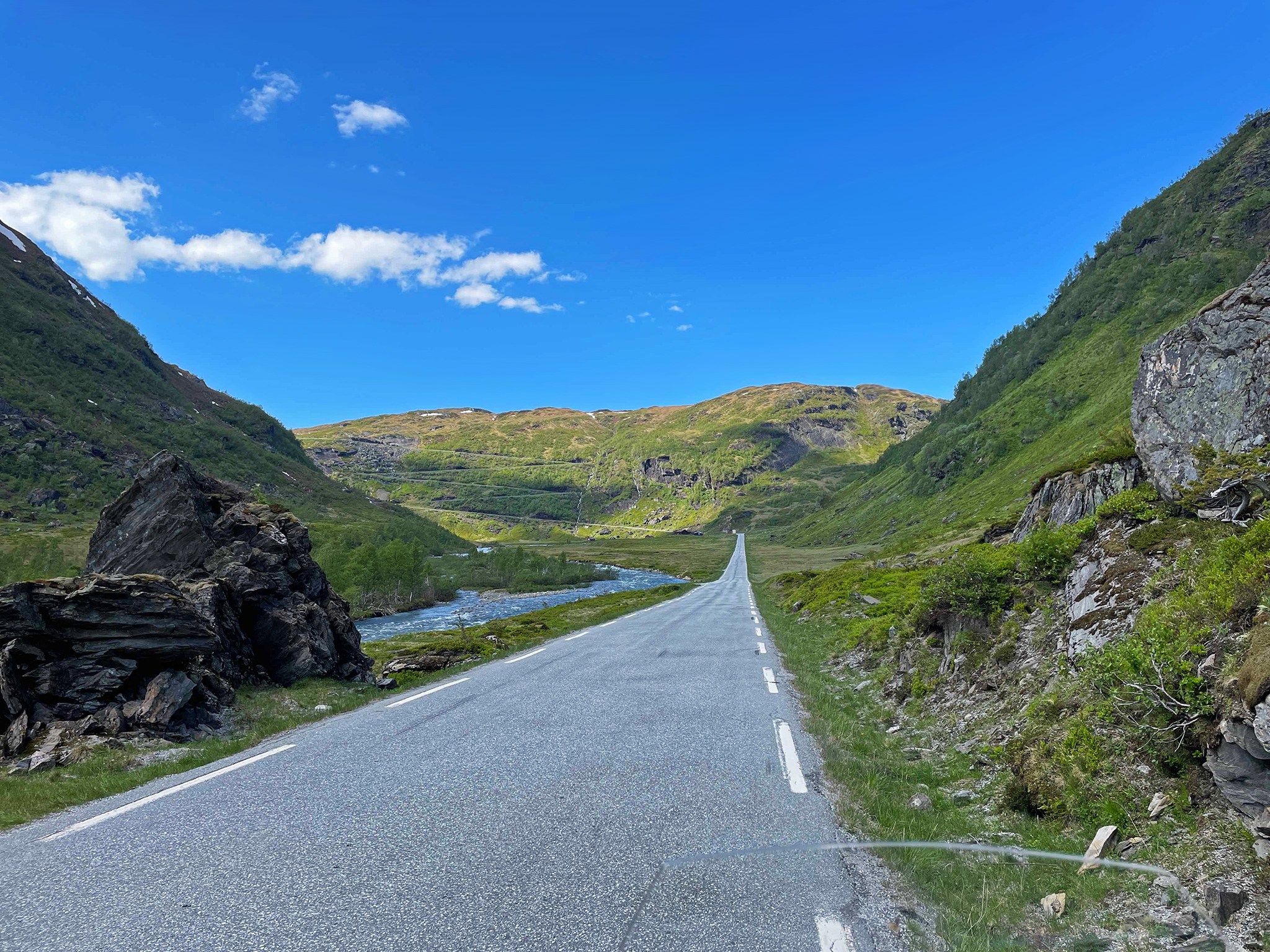 Along Rv13, also known as Myrkdalsvegen,  in Myrkdalen. Serpentine up ahead.

In the end of the valley the road climbs up to the mountains. it runs close to Myrkdalselvi, which you basically ride almost into in one corner 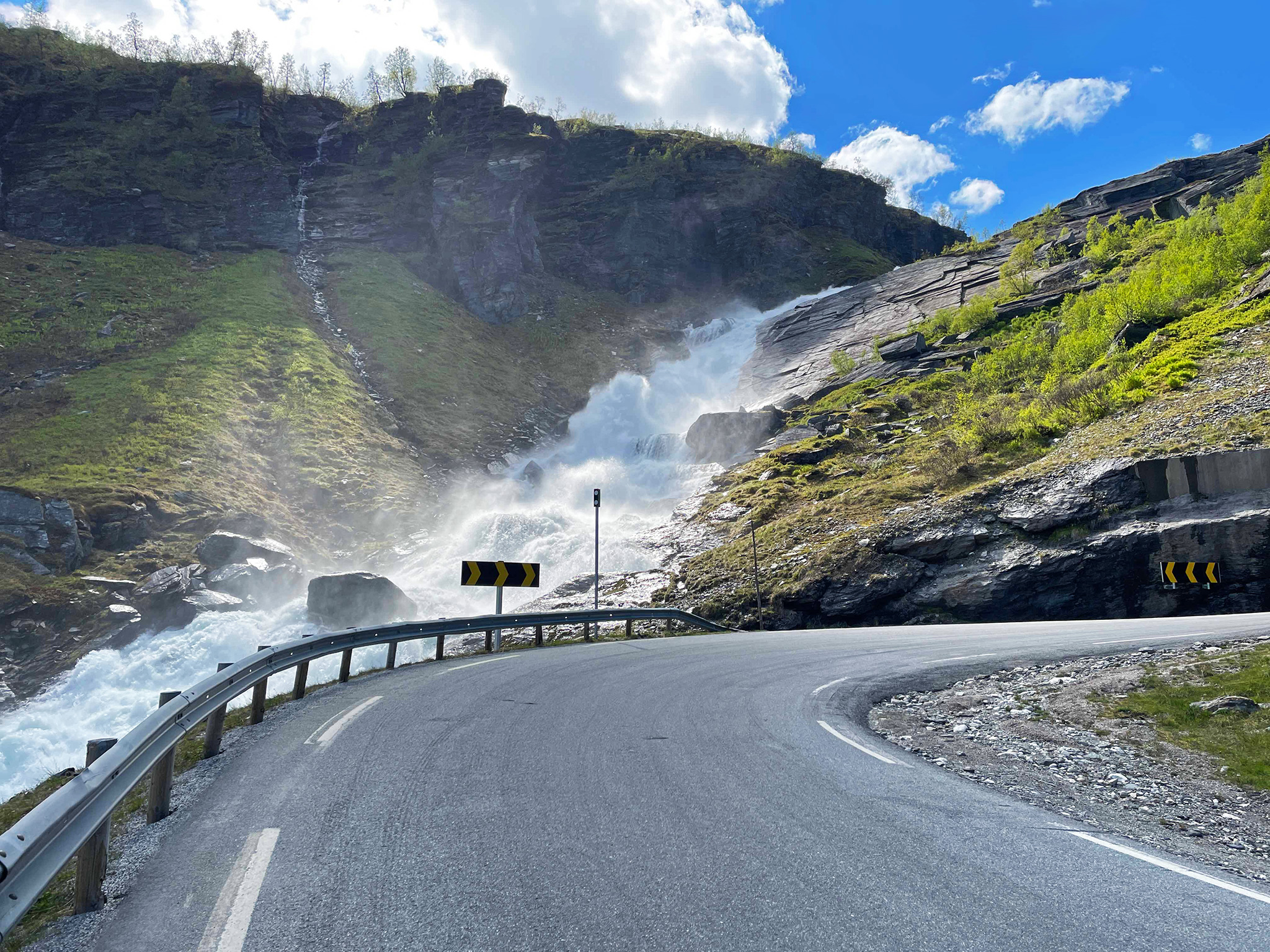 In one corner you steer right towards Myrkdalselvi.

I carried on a bit into Vikafjell. Lots of snow up there as well. It’s not unusual. Snow up in the mountains in Vestland rest of the country may stay till late June. Some places even into July. 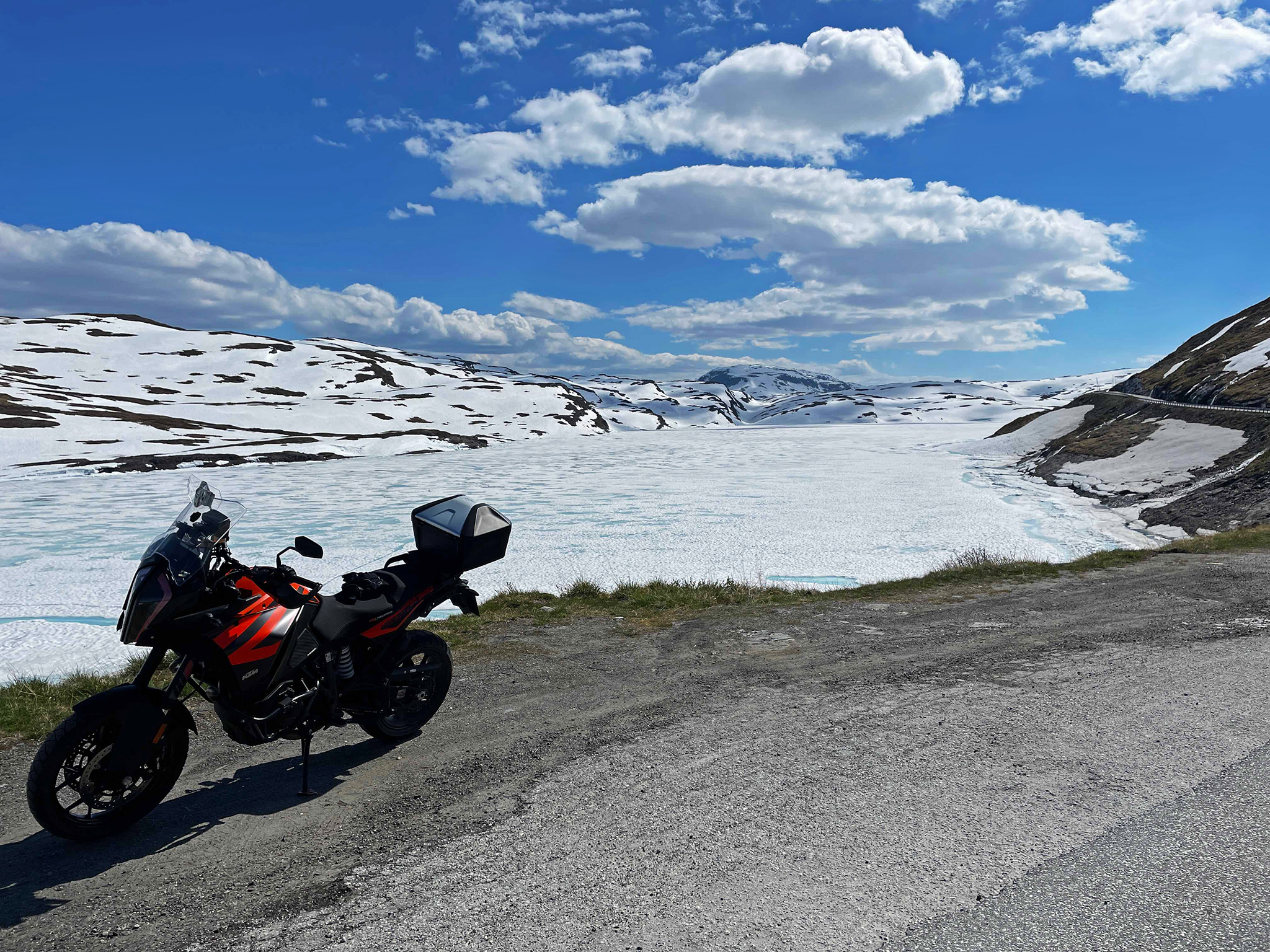 Up towards and across Vikafjell, plenty of snow and frozen lake.

it was getting later in the afternoon and I had quite a bit of riding back towards Aurlandsvangen. So I made a U-turn turned around and went back down towards Vinje.

On the way through Myrkdalen stopped to take more pictures. Think I’ve mentioned this a “few” times before, but for a motorcycle rider a road isn’t properly explore until you’ve ridden it in both directions. 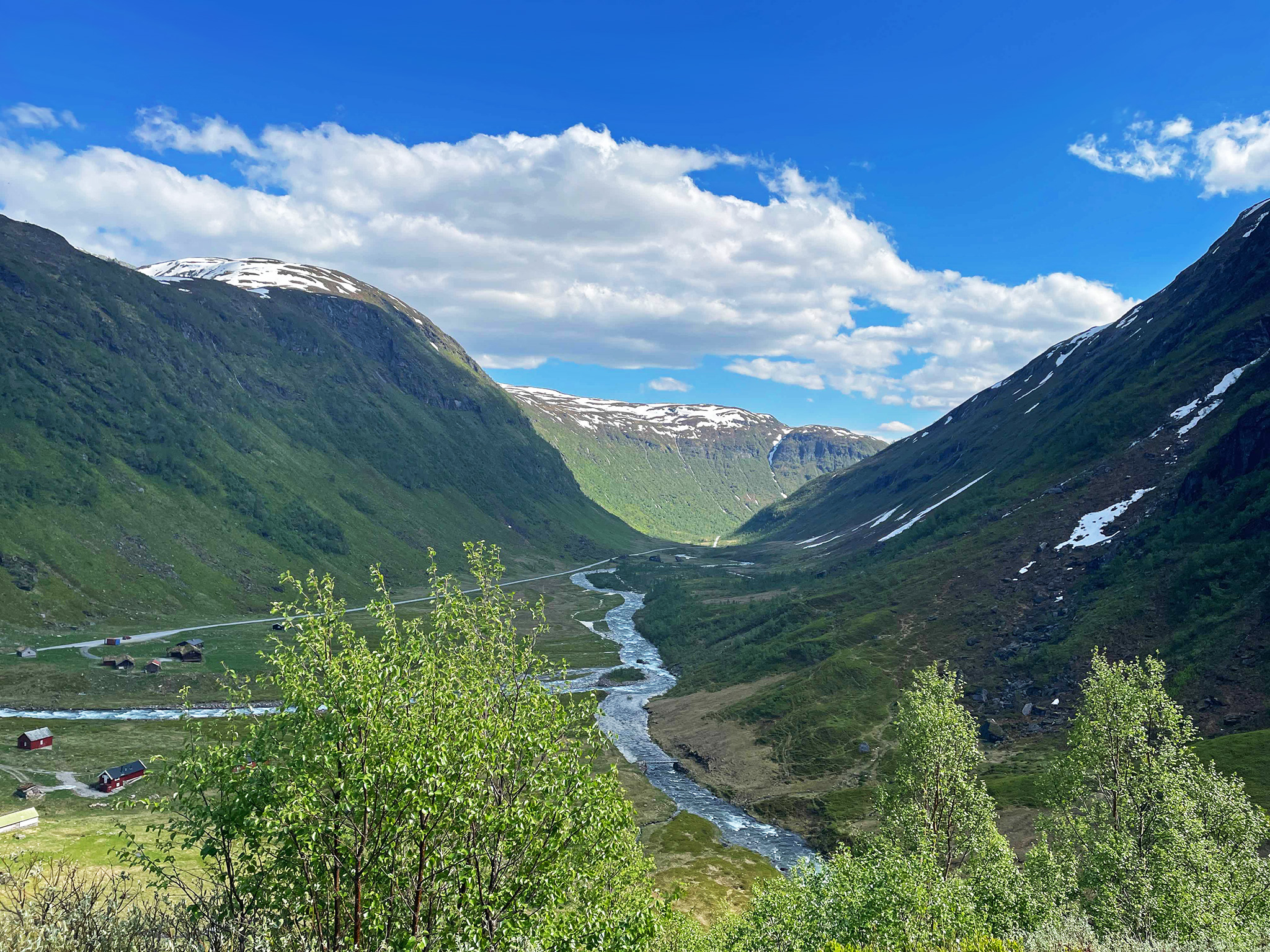 On return: view over Myrkdalen and the river Myrkdalselvi.

In the upper part there are just a few cabins. The view is magnificent, the atmosphere tranquil. Very few people about, some riders, some Norwegian tourists in RVs. That as it. One upside of Corona.

In Myrkdalen there are just a few cabins.

On the way down I received a text from my friend. We decided to meet up in Flåm which was underway on the return back to Vassygdi.

Back to Vinje, and then E16 in direction of Aurlandsvangen. Flåm village is along E16. You can read more about Flåm, the railway and other sights on this page. 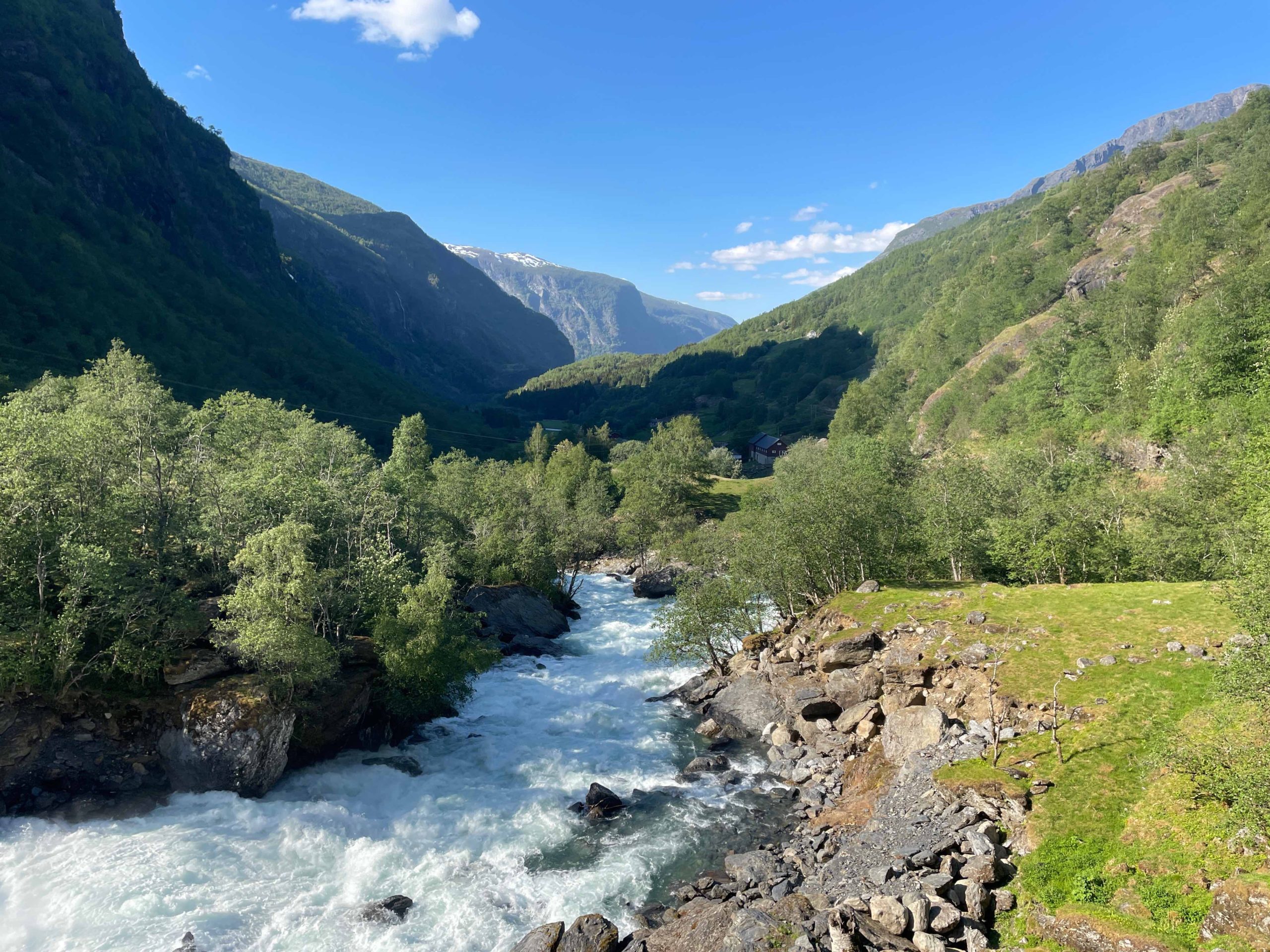 Scene from along Flåmsdalsvegen into Flåm valley.

We had agreed to meet in Flåmsdalen, or Flåm valley. From the village and E6 you take off and ride/drive up Flåmsdalsvegen. The road goes all the way to Myrdal station, but it’s narrow. As a result RVs and vans or caravans are not allowed to rive up to Myrdal.

The last part of road is gravel, fun if you have an adventure motorcycle. Because of the road surface I don’t you should try with heavy touring bikes. But on the other hand, people have done much crazier shit than this!

Never taken the train ride myself. It’s on the list. But the scenery along the road also is worth the trip, even though I’ve been told Flåm valley valley is best seen from a train window.

We ended the day with dinner at Aurlandsfjord hotel. I’ve never stayed there overnight, but the restaurant delivered. Great food, top service! 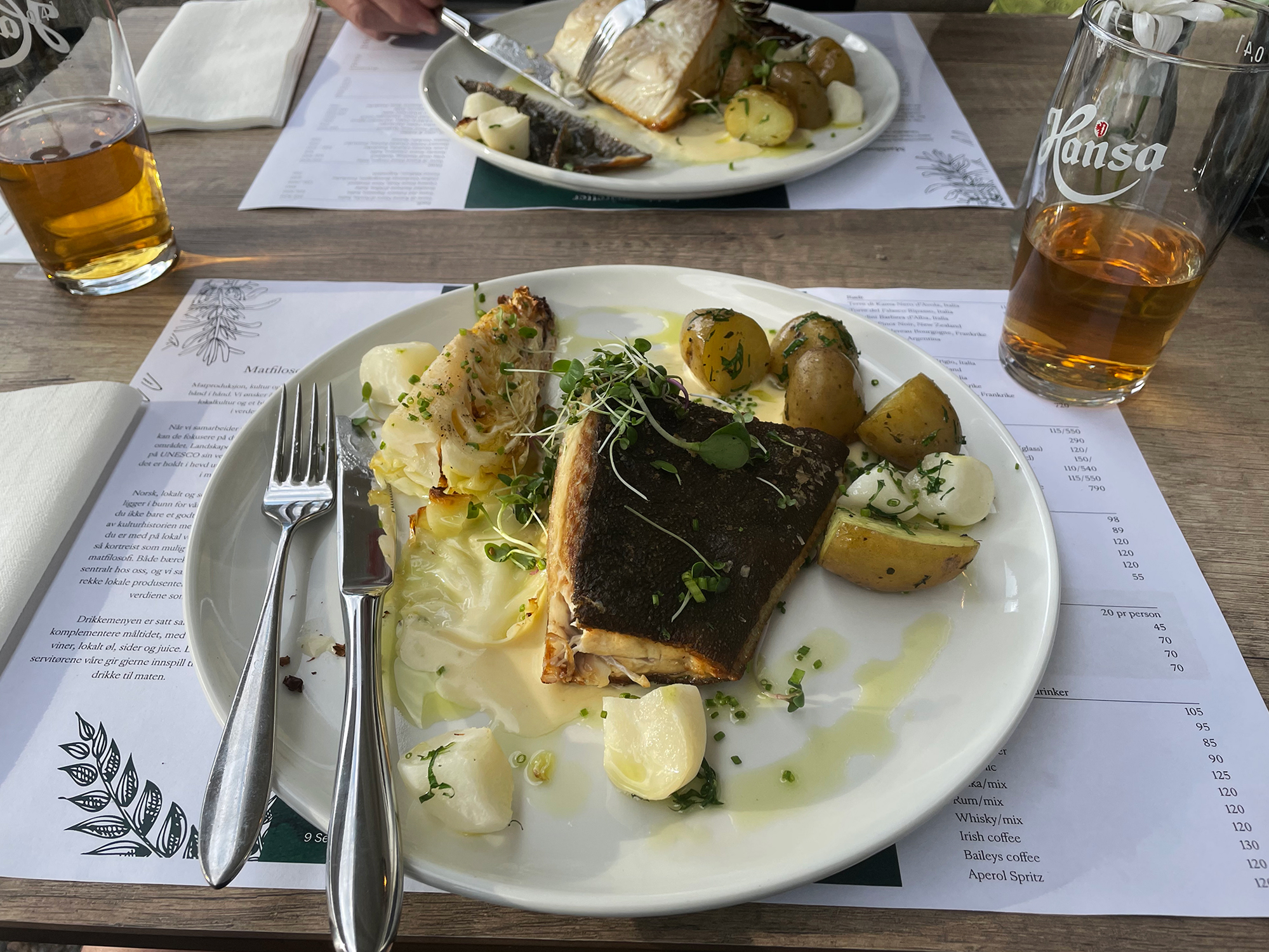 The food at Aurlandsfjord hotel was delicious!