Trollstigen, a serpentine mountain road and pass in Møre og Romsdal county was the first target of the day. Followed by Geiranger and Geirangerfjorden.

Trollstigen is in Rauma Municipality, Møre og Romsdal county.  If you come from the south, along E136 and Rauma river, it’s hard to miss. More about that later.

On gravel and dirt

Since returning to motorcycle riding spring/summer 2015 I’ve been 4 times in central Europe. But there are an awful lot of places in my own country I had not been to on a motorcycle. Trollstigen a Geiranger were two of those. 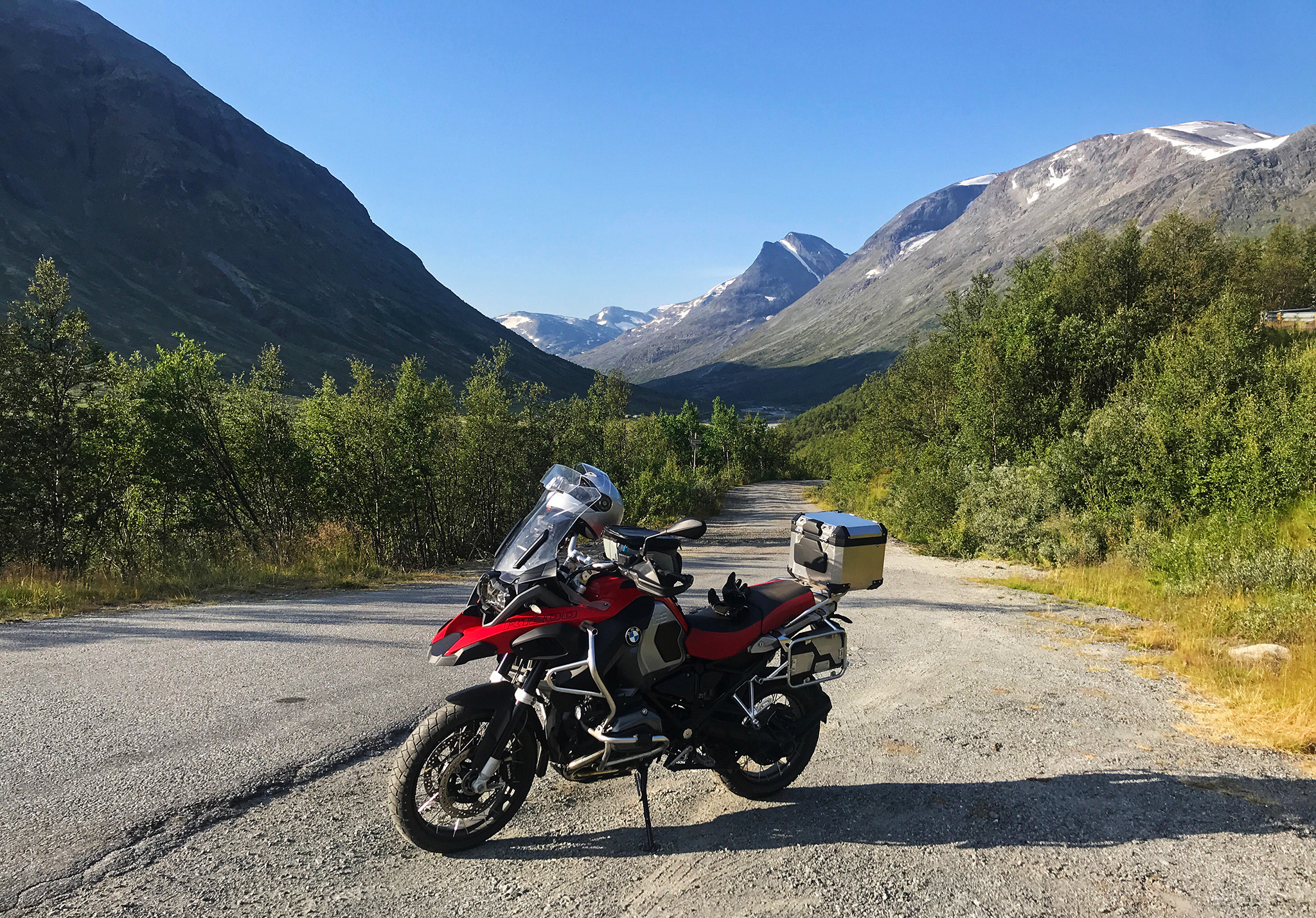 At the end of Leirdalsvegen – the entry to Jotunheimen, July 2019

Set out early in the morning, right after breakfast. The weather was just perfect, though a little chilly up in the mountains. Old Mother Norway showed herself from the best possible side. First leg back down on Leirdalsvegen to the main road.  The only thing you need to watch out for along this road is cows and potholes.

Back on Fv55 I rode down to Fossbergom, Lom, and onto E15 down to Vågåmo where I met up with a friend.  We decided to cut across the mountains on a toll gravel & dirt road to Lesja. 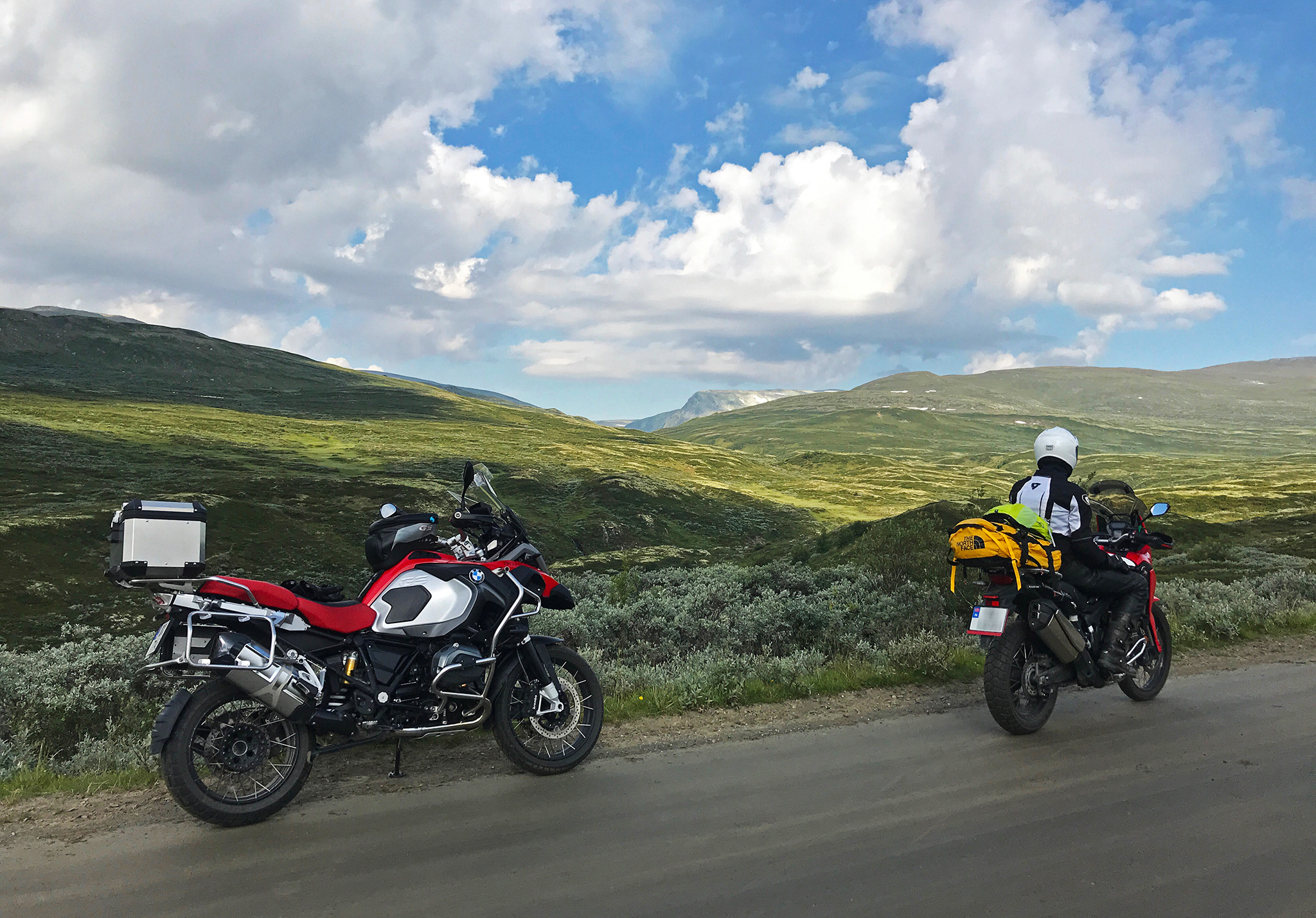 Along Slådalsvegen to Lesja. A toll gravel and dirt road.

Time-wise it might have been faster to follow E15, then hop onto E6. But this adventure was not about saving time. Slådalsvegen is a great gravel and dirt road. When you’re on small roads in Norway, in the mountains during summer, watch out for sheep and cows! They are, quite literally, everywhere.

Slådalsvegen should not be a problem for those riding touring motorcycles with more road biased tires. Some sections are twisty but the road surface is mostly solid, based on hard packed dirt with some gravel on top. 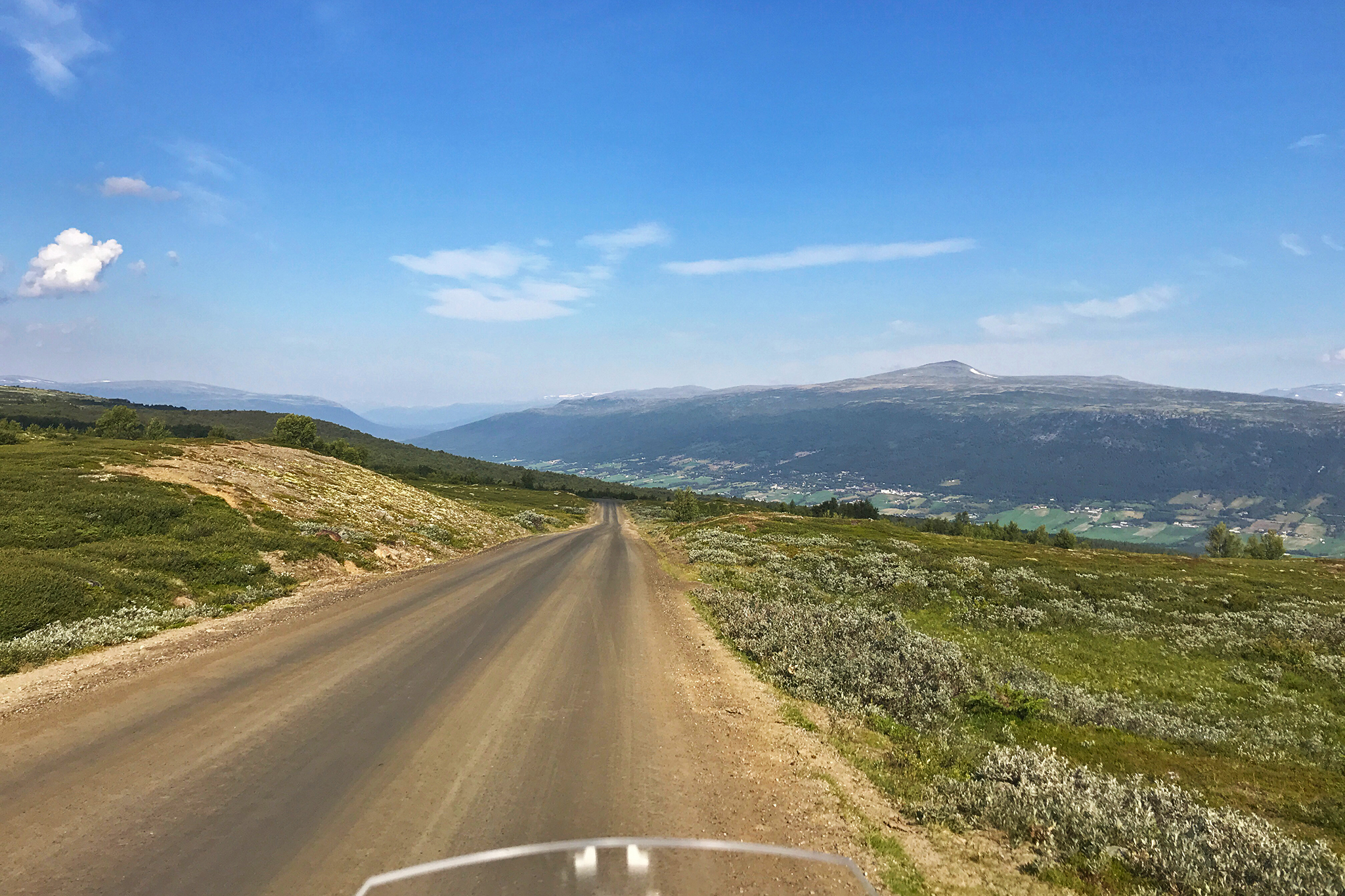 After a while the road began to slope down towards Lesja. Not long after we were on E136 and pavement. Good leg!

E136 to Åndalsnes is at first pretty boring. The road runs in a flat valley,  and is pretty straight. As one enters Romsdalen the landscape changes dramatically. High, rugged, edgy mountains show up on either side. A little further up we took off onto Fv63 and Trollstigen. 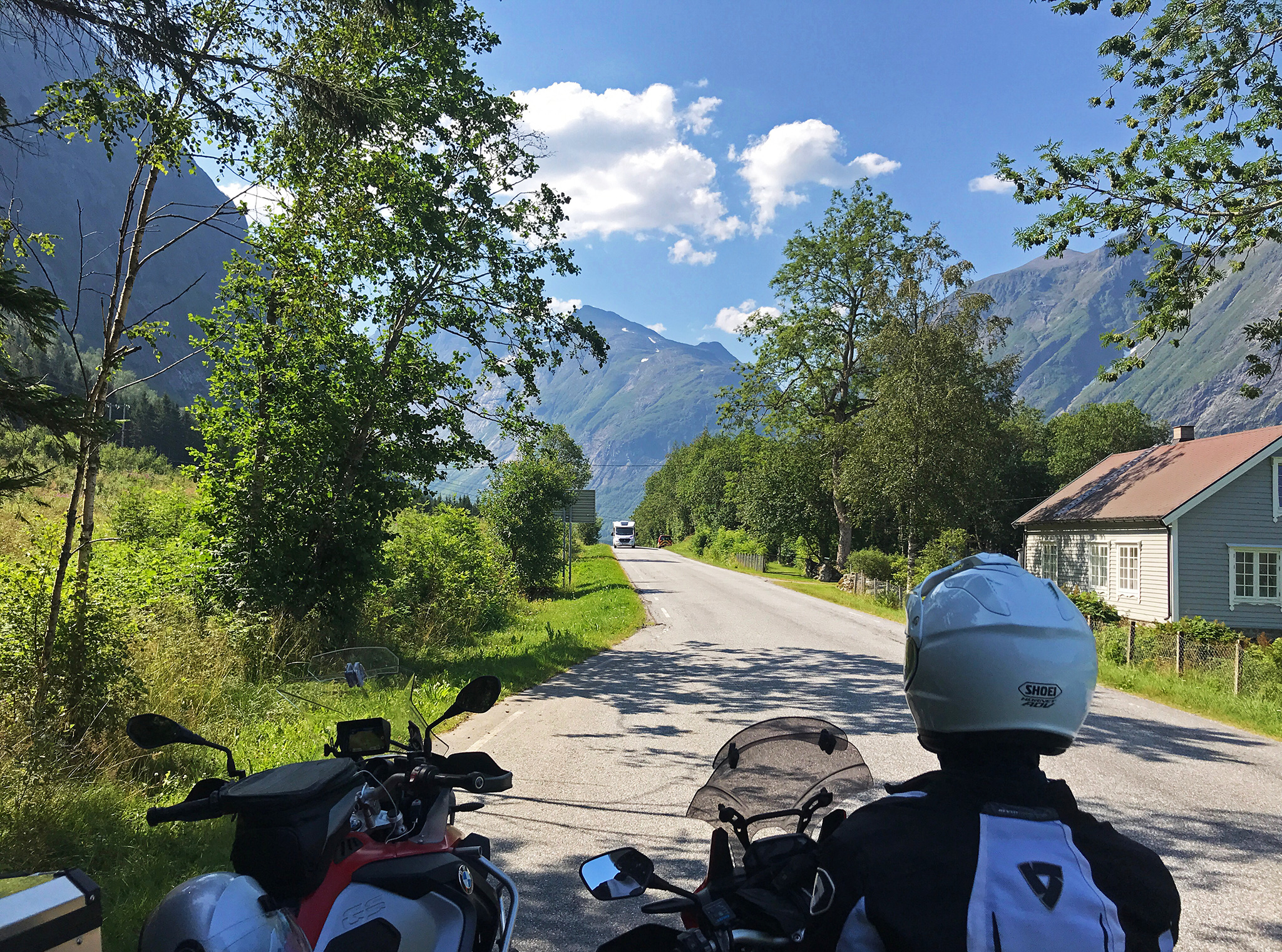 I felt the same almost bubbling excitement as I’ve felt so many times while riding in the Alps, across alpine passes. Trollstigen only have 11 hairpins, the inclines are not as steep as in Lysebotn. But the scenery, especially in weather like we had, is absolutely breathtaking. 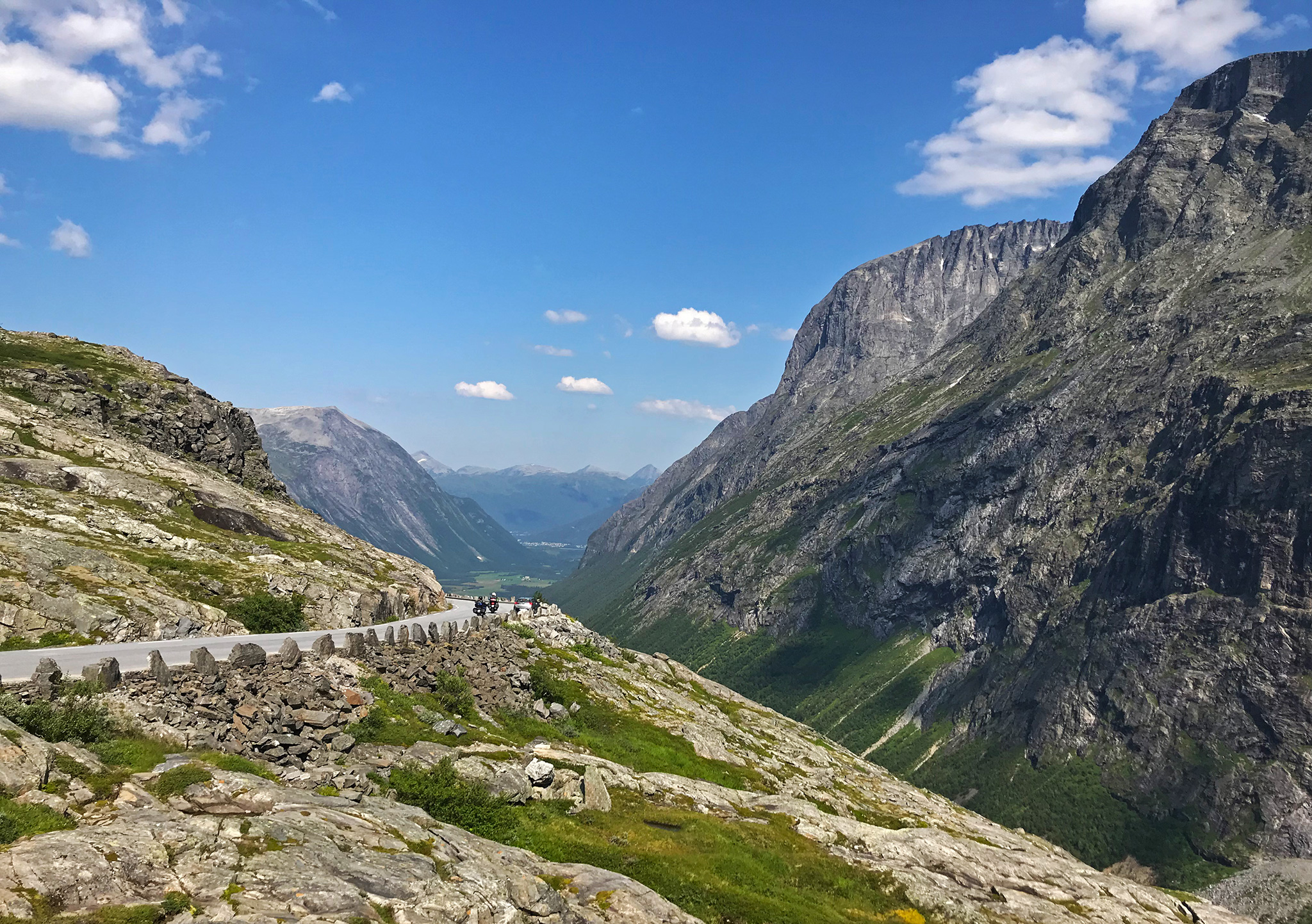 Trollstigen: just before the vantage point and cafe at the top

We stopped for lunch at Trollstigen vantage point. Quite as expected packed with tourists and buses. It’s what you got to expect if you come this way in July midday.  If you aim for Trollstigen my advice would be to ride up/down early in the morning. Before the first wave of tourist buses, before the hordes. 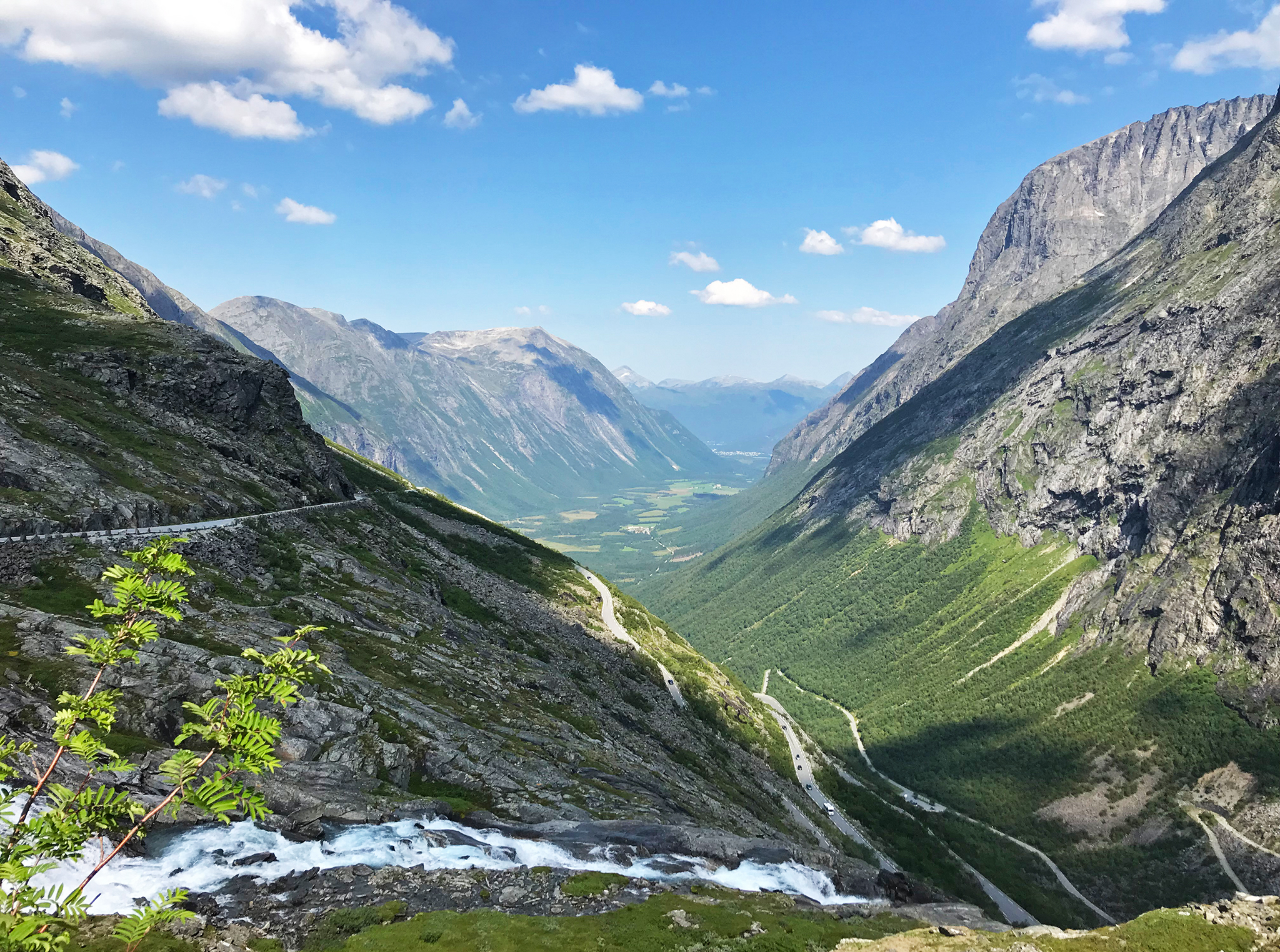 Trollstigen, seen from the vantage point

I could not leave without going out to the tip and take a few pics. We then took off and followed Fv63 southwest. Making a few stops along the road for pics. 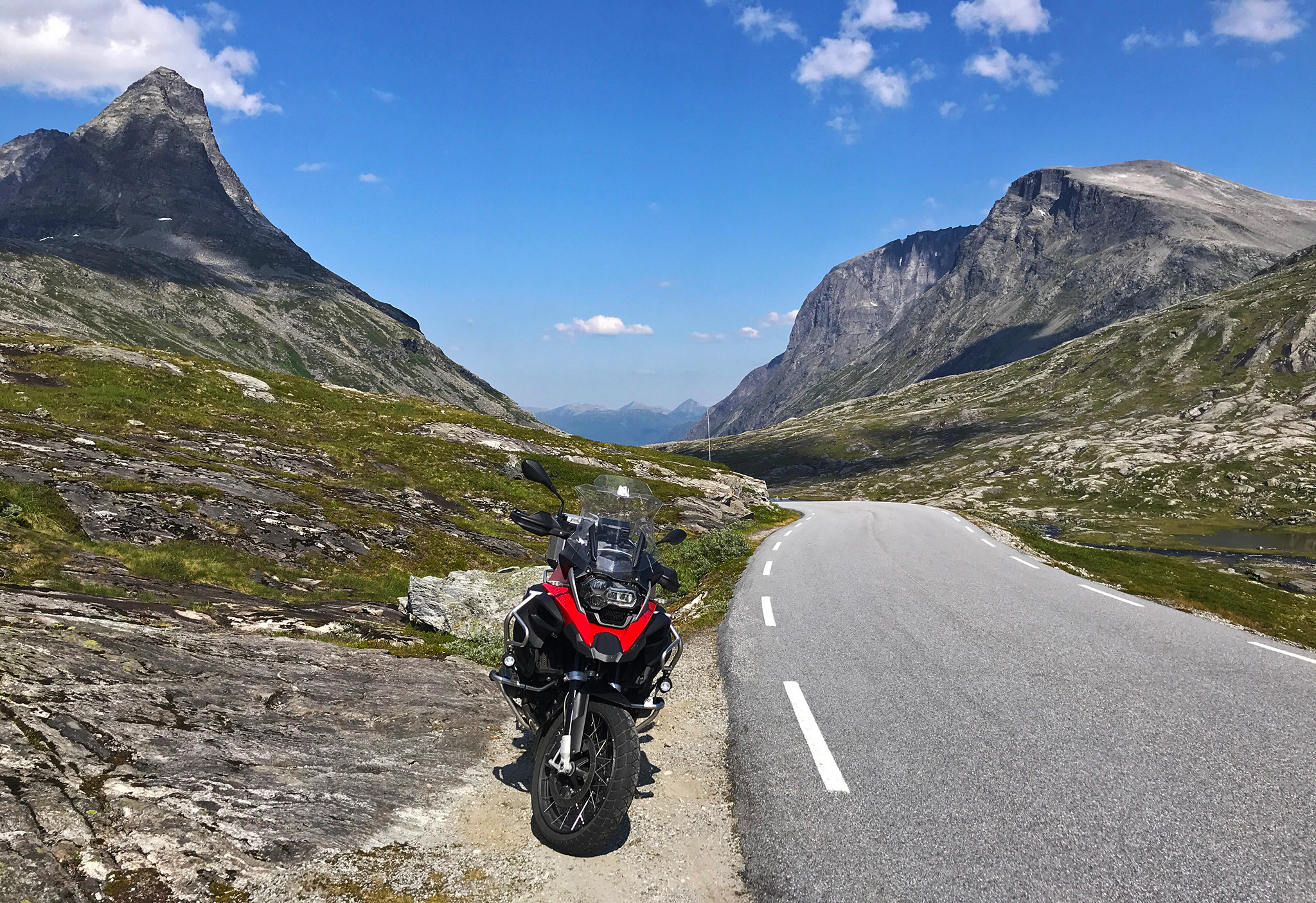 Along Fv53 the scenery is… exactly

From Trollstigen to Geiranger and Geirangerfjord

The next stop was Linge ferry place, right after Valldalen. This ferry runs with an interval of 30 minutes and is part of the tourist route Rv63. In other words, no need to plan anything. See this page for details. 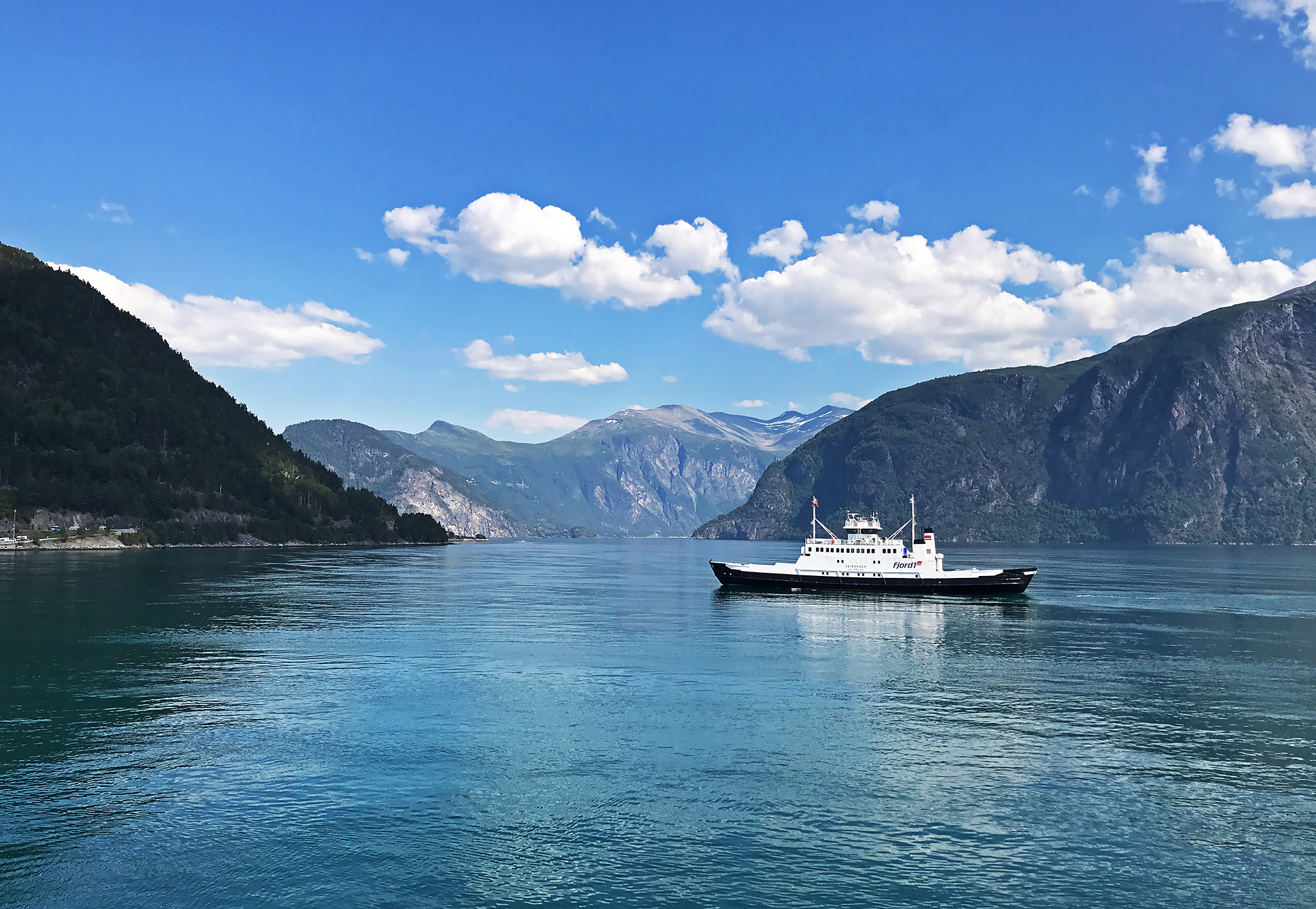 Across the fjord on the ferry

In Eidsdal we continued along Fv63 in direction of Geiranger. First through a beautiful valley with high mountains on either side. 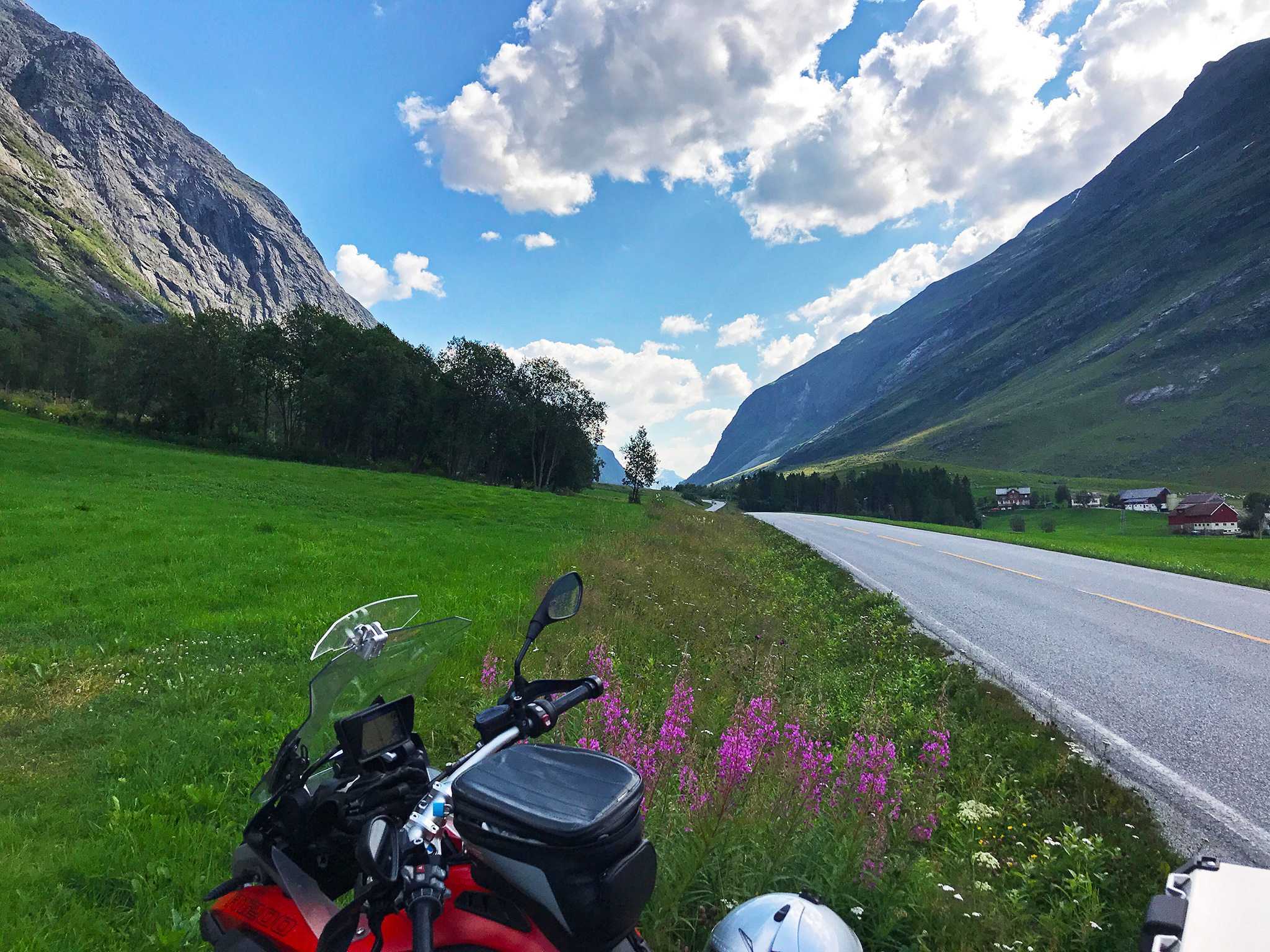 Fv63 between Eidsdal and Geiranger

Later it climbed a bit until, suddenly, we could see Geirangerfjorden below us. Geirangerfjord is a marvel, a gem, a unique place. Coming down Ørnevegen (Eagle road, the name of the section) opens up before your eyes with a view like below. 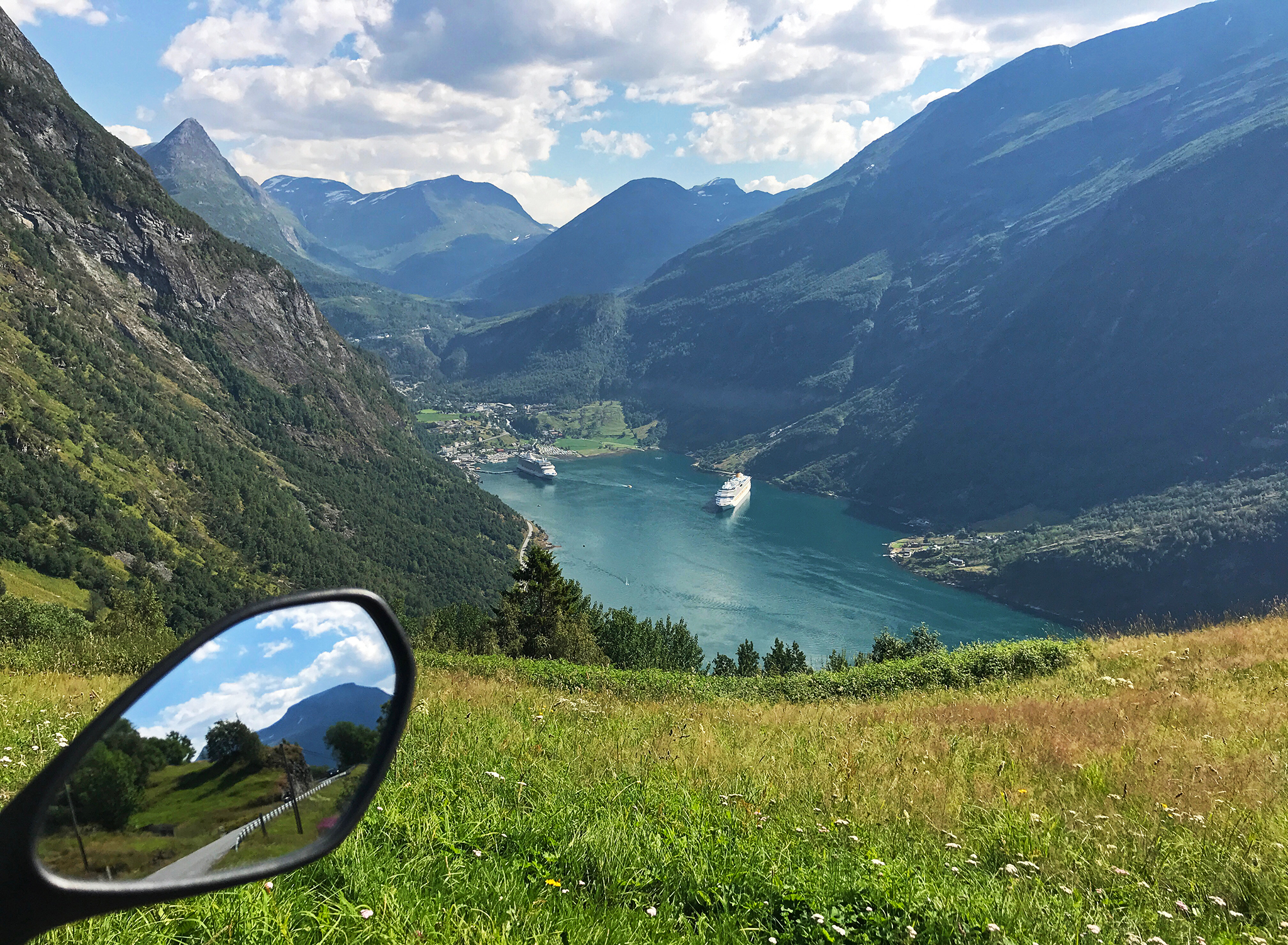 Along eagle road, Geiranger and Geirangerfjord

Geirangerfjord is on the UNESCO world heritage list. In later years new regulations have been put in place to enforce a much stronger emissions policy.  Older ships with higher emissions are no longer allowed into the fjord. They also have regulated how many ships can be in the fjord at the same time. 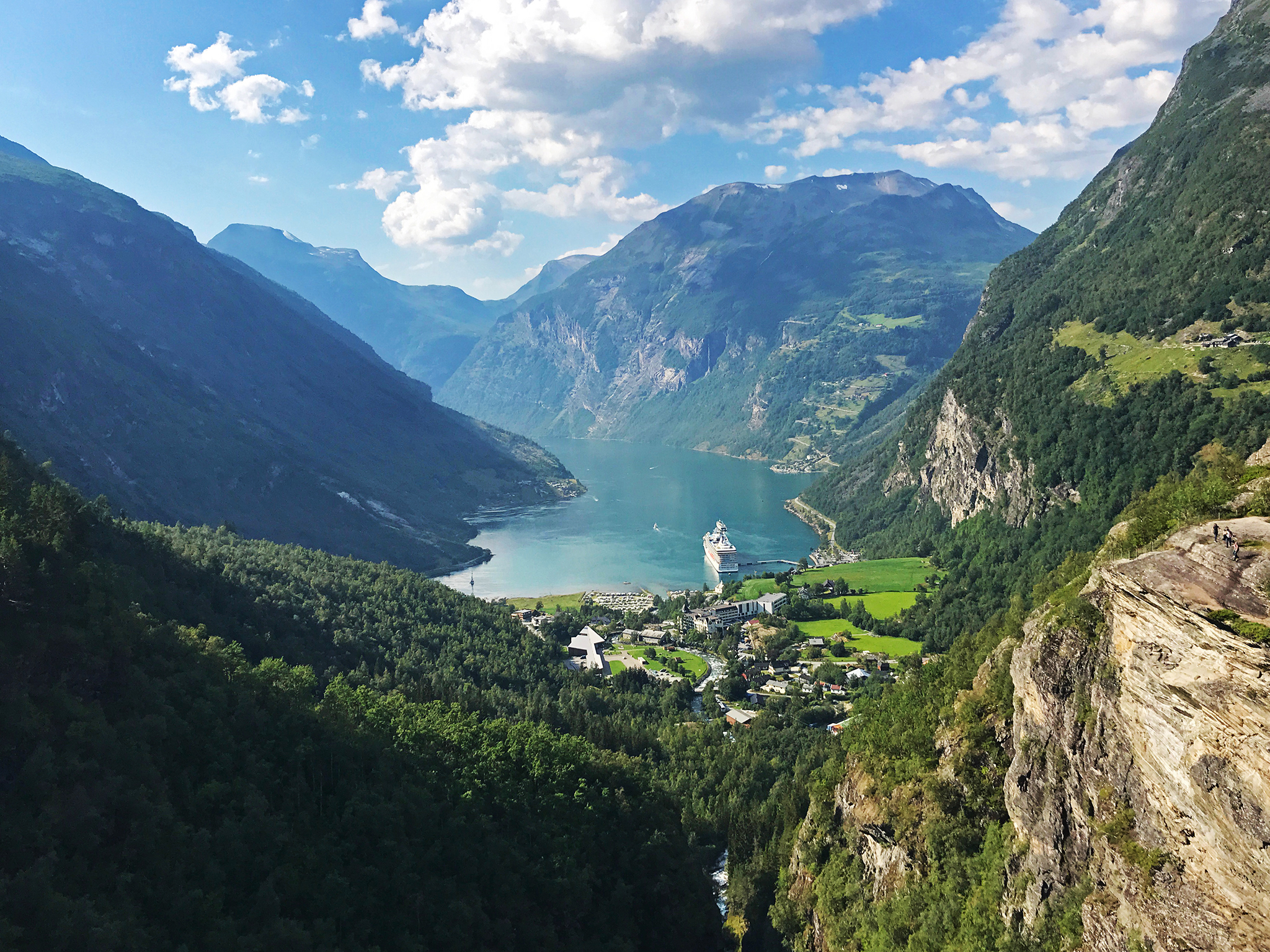 Geiranger and Geirangerfjord from the south side

In Geiranger my companion decided to stay whereas I hopped back on Rv63. The road takes you out of the fjord valley and up into the mountains. Pretty spectacular view from the south side as well! 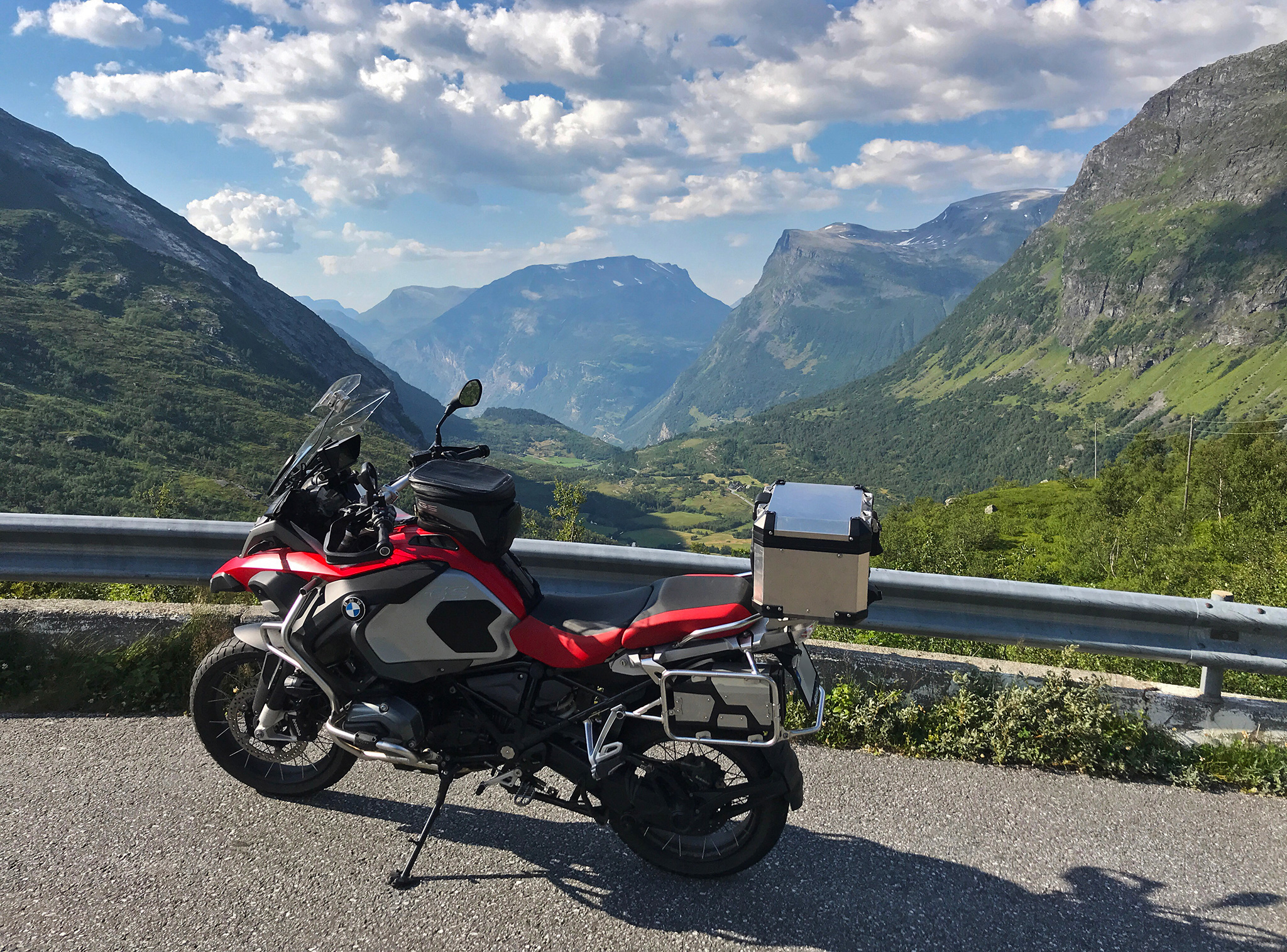 By Rv63 south of Geirangerfjord

The southern section of Rv63 won’t disappoint anyone, with plenty of curves and inclines. Ascending from the fjord the cuts across the mountains in a southeastern direction. Some miles down Rv63 merges with E15.

It was now later in the afternoon as I passed Breidalsvannet (a lake). On a whim I took off onto a gravel road. Incidentally that impulse brought me onto the old road to Geiranger. 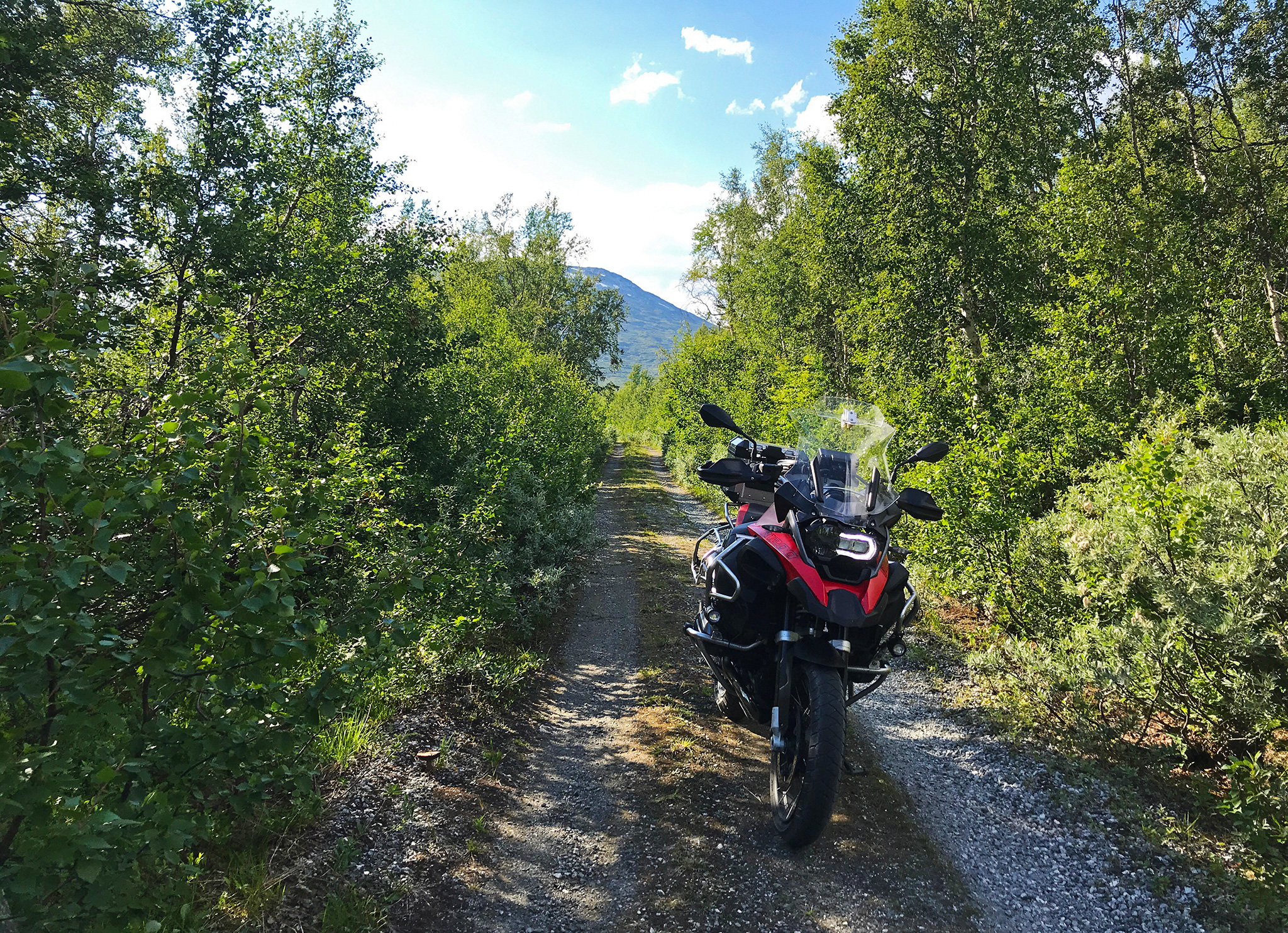 The old overgrown road to Geiranger, an interesting experience

It was indeed an  old road, old and forgotten. Sections of it was almost overgrown by shrubs and trees, with lose gravel and sand.  Rode it for a few miles but because of time time I went back onto E15 or Skjåkvegen. Still had quite a distance to go. 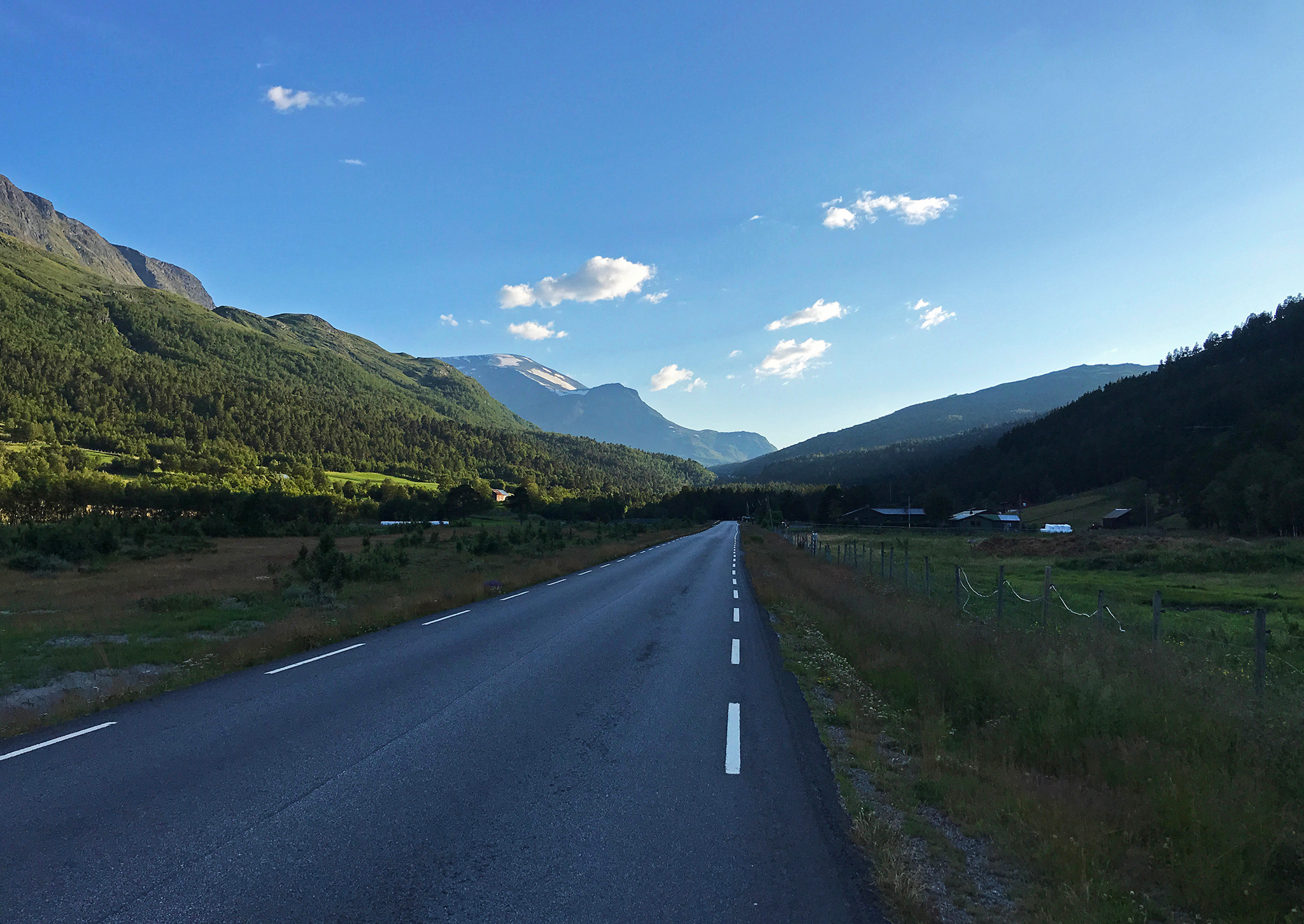 Fv55 at 8PM through Leirdalen in direction of Jotunheimen

In the evening I arrived in Lom. Found a place to eat, then got on Rv55 back to base. Saw very few cars or motorcycles. Half an hour later I turned off the main road down Leirdalsvegen. Arriving at Leirvassbu I’d been on the road for a good 1.,5 hours. Very ready for a shower and a pint. 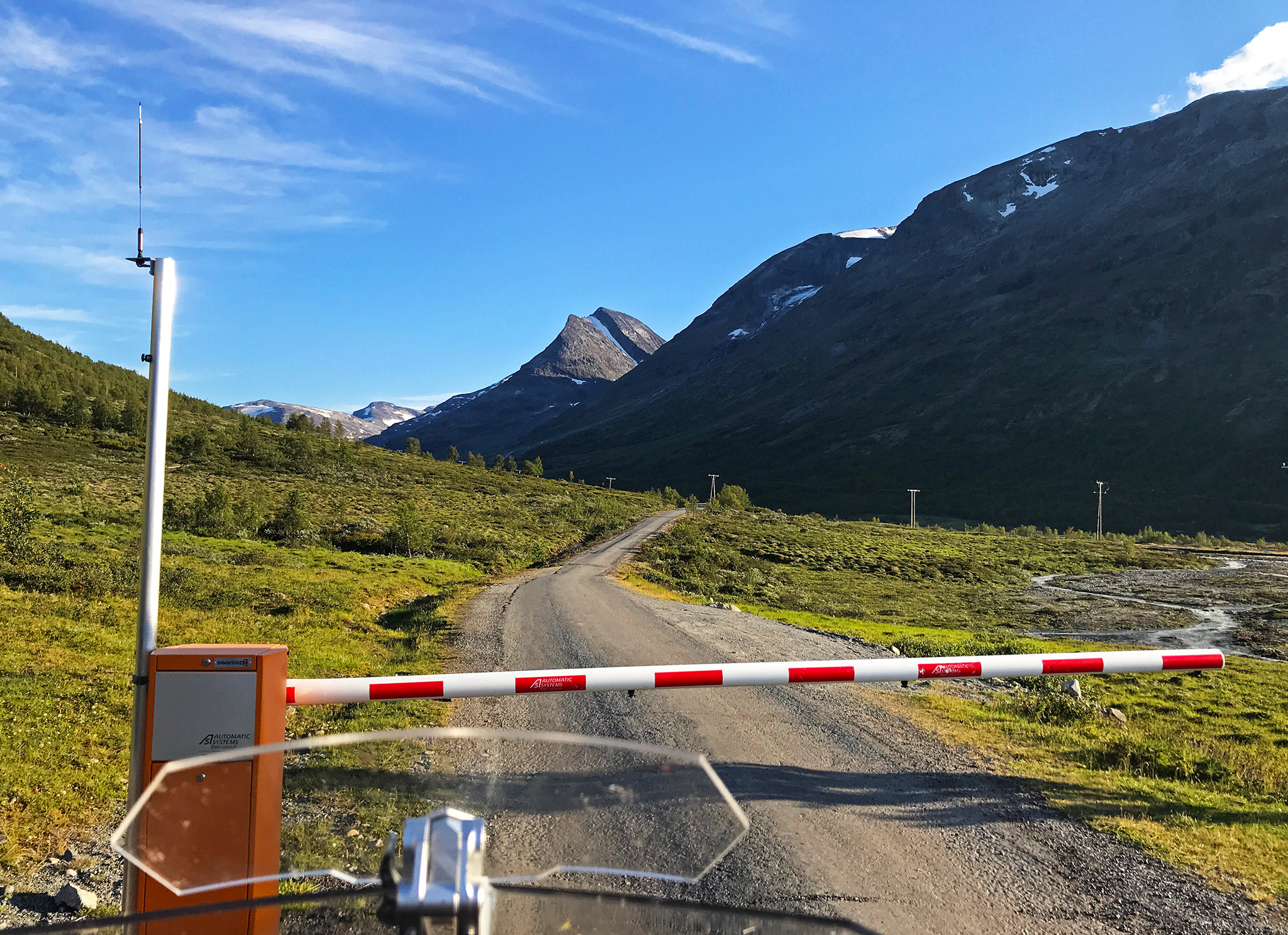 Leirdalsvegen, a toll road into Jotunheimen

And so ended one of the best motorcycle days of the year. Most of the route displayed below. The day after I would take the long way home. 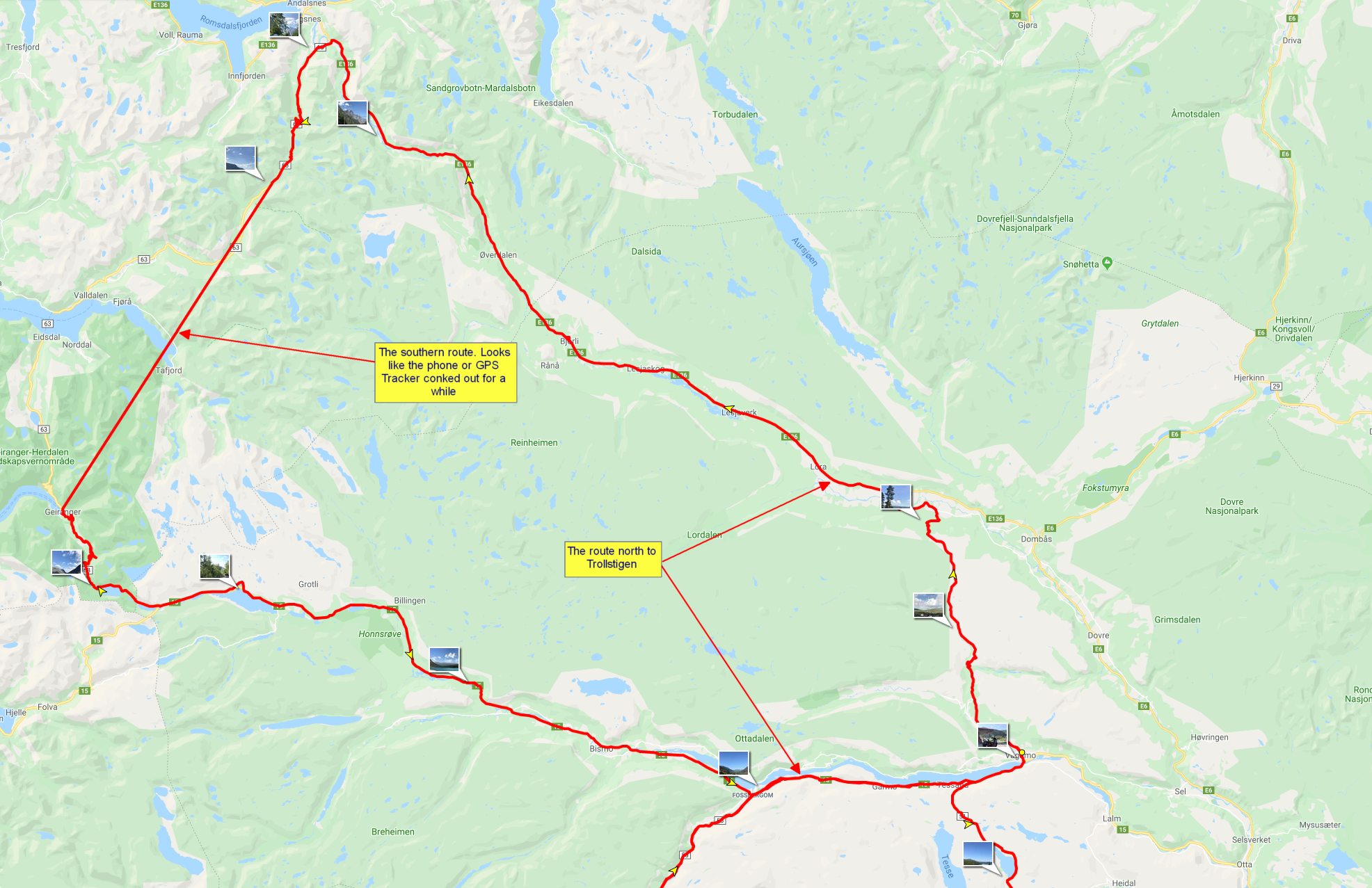 July 27th route, or most of it