“Tour de Vestland” was on the menu for the day. My friend/host had planned a route. A route with roads I’d  never ridden or driven before.

Because of Corona most people,  across Scandinavia, Europe and elsewhere, have had domestic holidays this year. So also here. Since early June, there was very little traffic on the roads. At the tourist attractions few people. June is a good time to ride about in southern/western Norway.

You will encounter snow in the mountains, with temperatures sometimes below double digit (C) but roads are open.

The weather forecast for the day suggested dry conditions. Not that it mattered a great deal, we both use Rukka suits, among the more solid and weather proof gear available.  Learned a thing or two about solidity of the brand in last year’s accident.

Tour de Vestland began with riding north. We followed E39 in direction of Aurdal and Vikanes, towards the Masfjord tunnel. A main road but much thanks to the landscape it’s a pretty nice ride. Right before the tunnel we took off on a small er road, that went across, and along the sea. 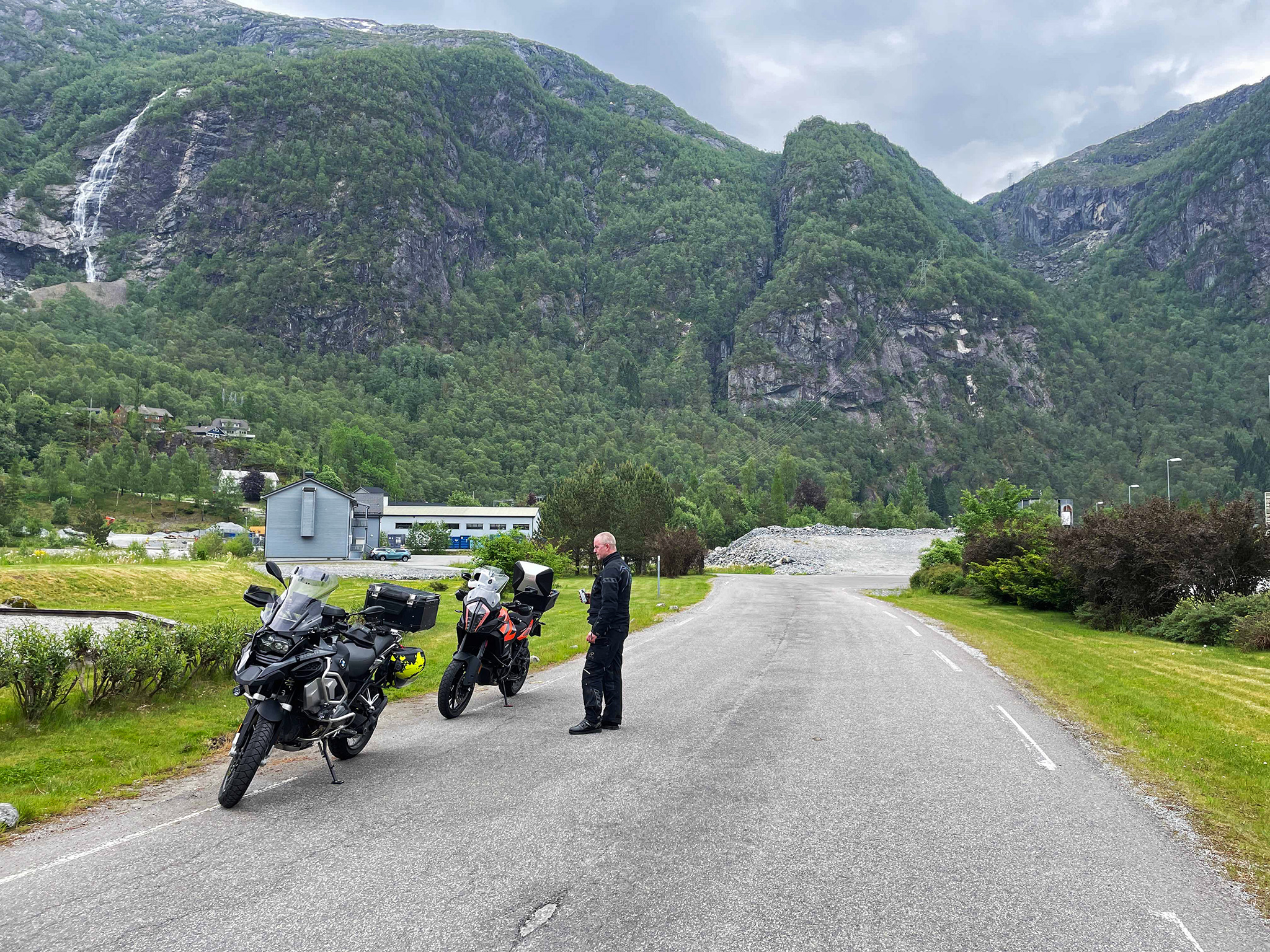 In Matre, and back on E39,  we made a short stop. Primarily because Fv381, to my companion’s surprise, was closed. Therefore we took E39 to Oppedal and the ferry over to Lavik, where we hopped onto Lavikdalsvegen. Further north it changes name to Fv63.

The landscape in this area is hilly, mountainous, with lakes, streams and rivers. The population density is low, and that means very little traffic. At lake Espelandsvatnet the Rv (Riksveg = national road) 57 took us further north. Over from one valley, into the next 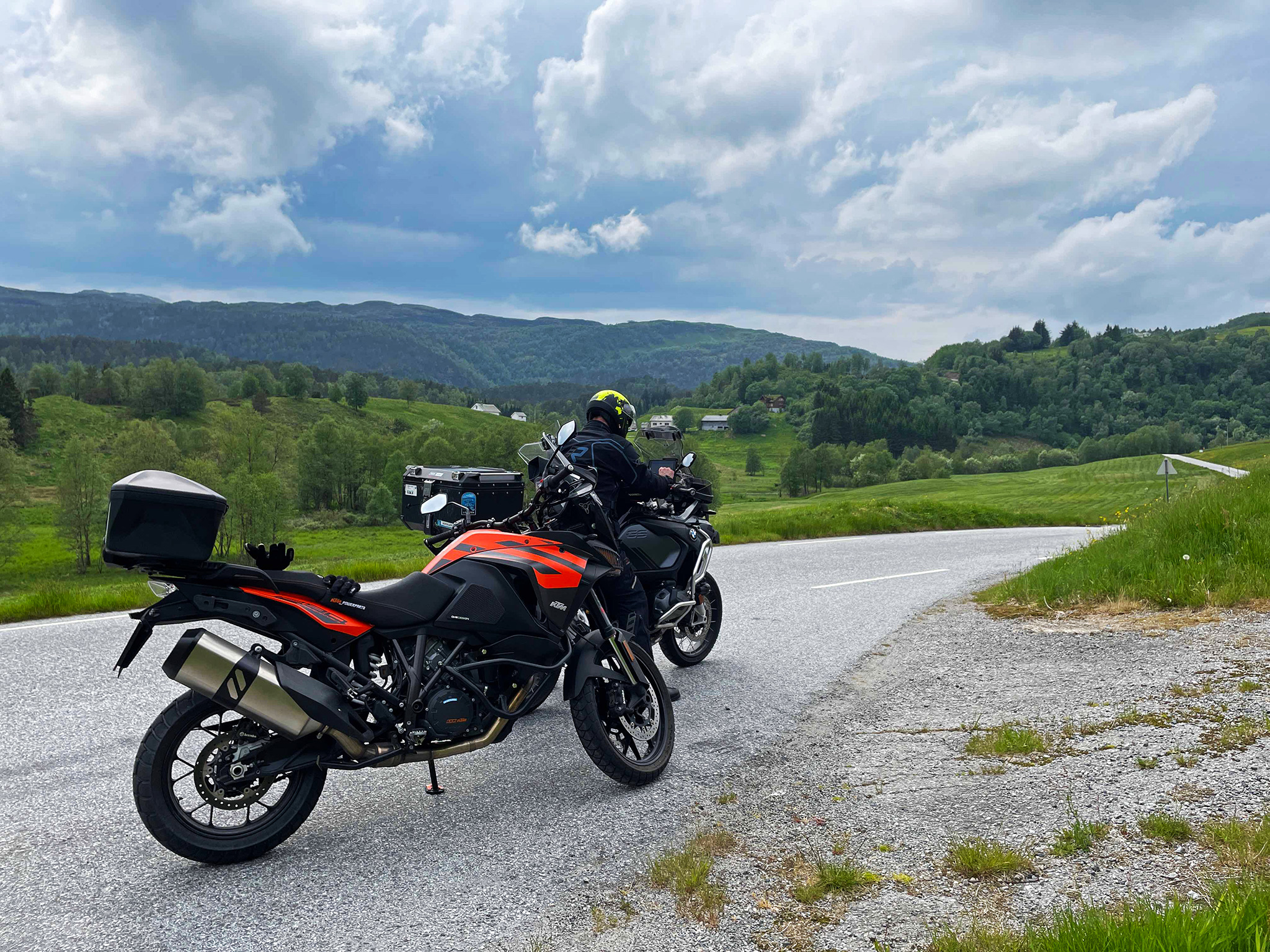 A stone table by a lake

One of the goals of the day was Gaularfjell and the vantage point. But the main goal was the roads. The riding. And road-wise things improved considerably as we took off from  national road Rv57 onto the much smaller Fv392.  Which some kilometers later, changed name to Fv93. 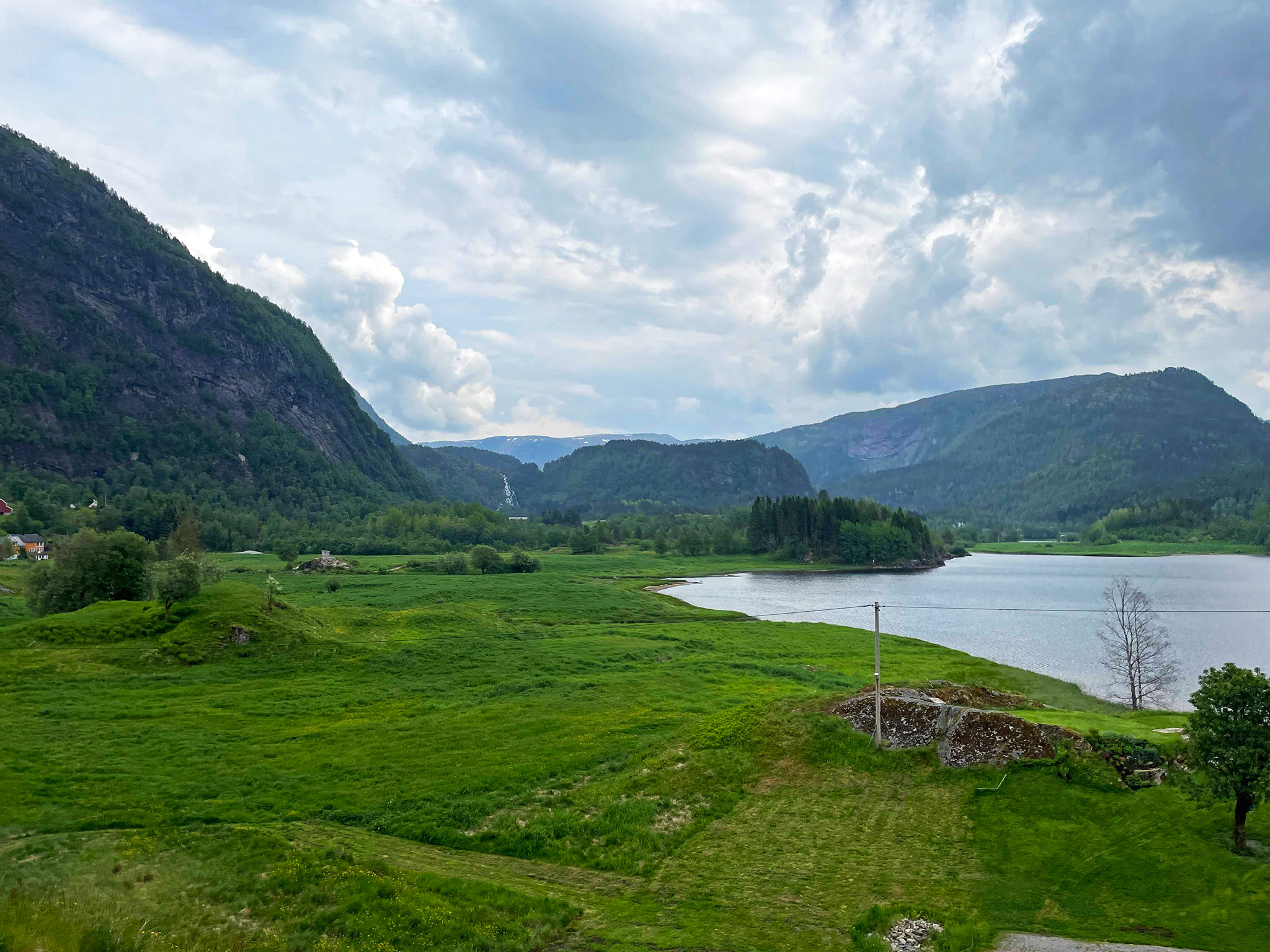 View from from Fv93 – Vestland, Norway

My friend had it all planned very well. At Botnen we departed from Fv93 and rode up into some fabulous valleys, on a road that had no name. At least no name I am aware of, or have been able to find. Nameless or not, it was a gem. One I hope to ride again some day.

For experiences like this it’s definitely an advantage to ride with someone who knows the region. That, or have loads of time to do freestyling. 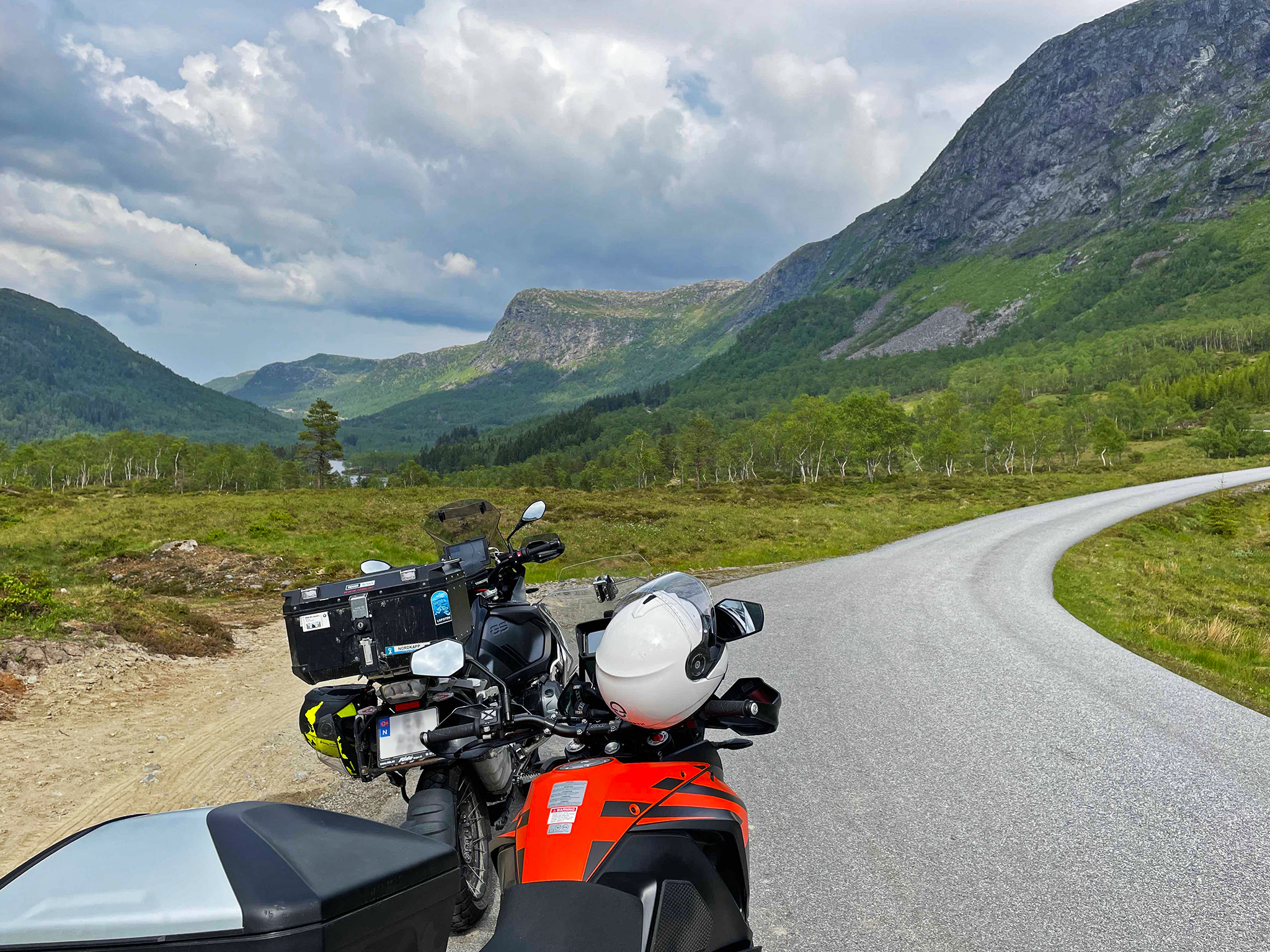 Along a nameless road in Steinset valley.

Coming up to Steinsetdalen (Steinset valley), we stopped to take in the marvelous view. Just by the road we found a stone table. On it, someone had put a Norwegian flag. A tribute to the fabulous landscape maybe? 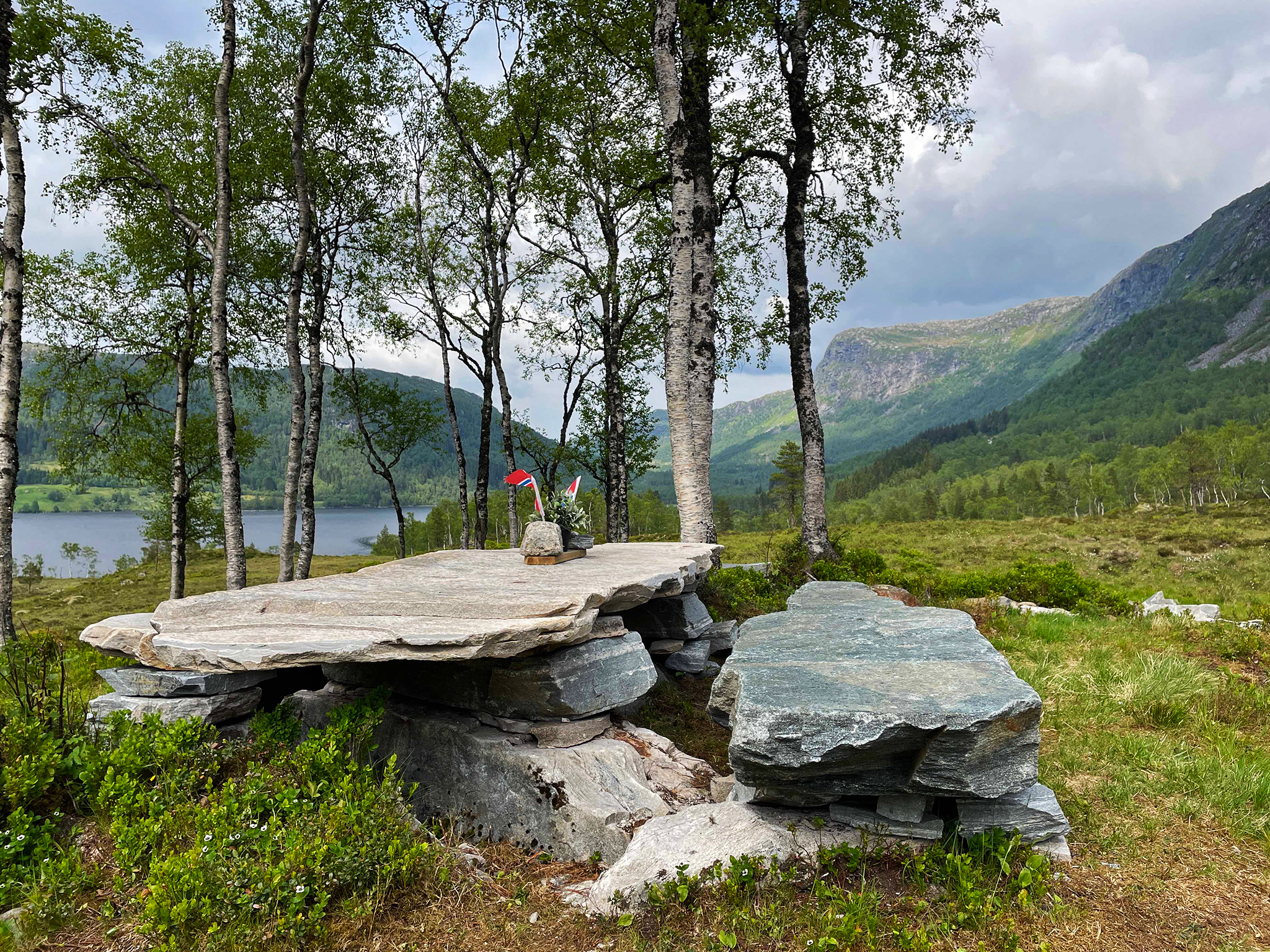 The stone table in Steinset valley

We rode for a while on small roads, then got onto Fv13. FV13 runs across Gaularfjell, and one of the better vantage points in the country. If you ever plan to ride or drive in Norway, Gaularfjell is one for your list. 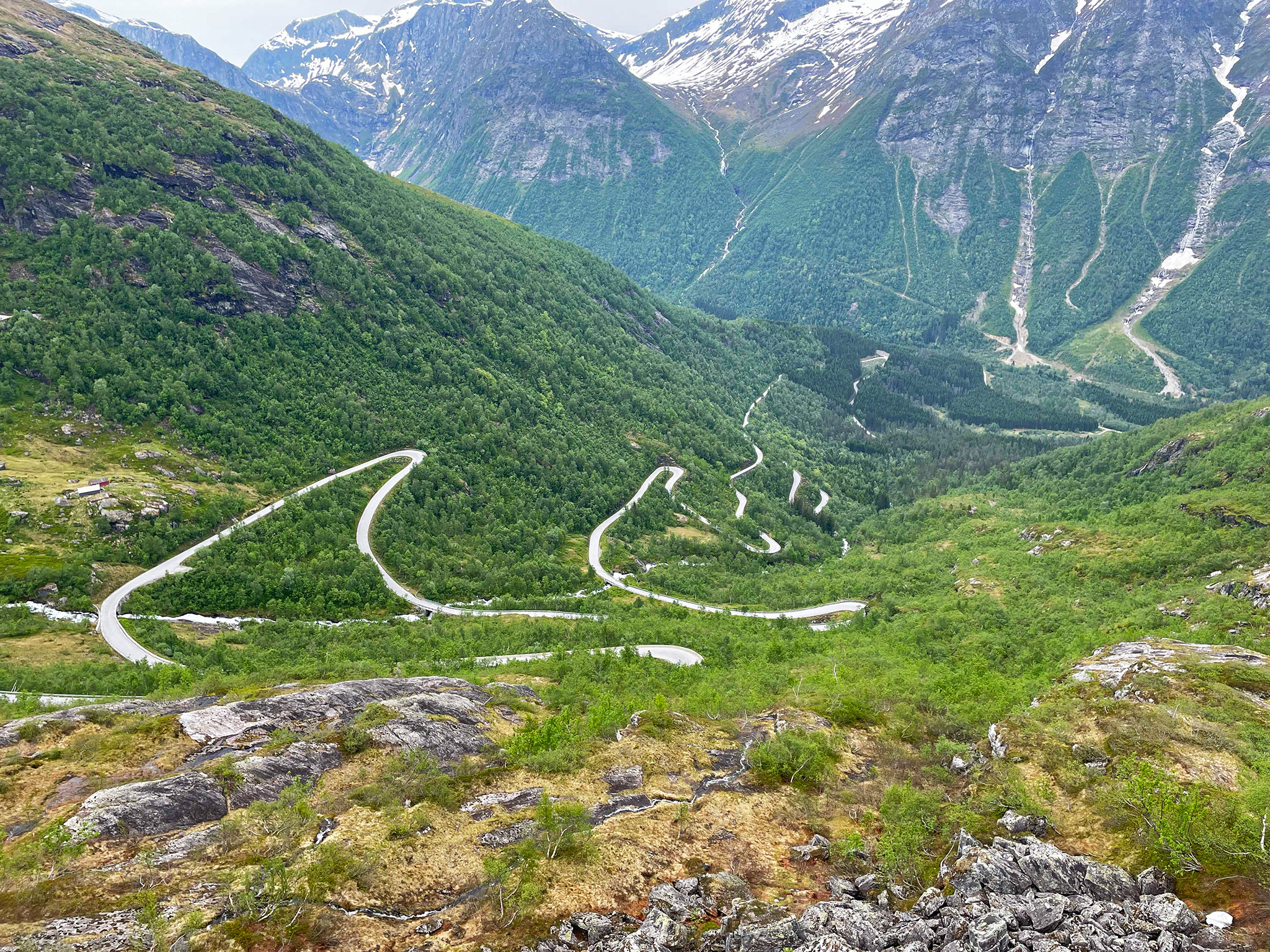 View from the vantage point at Gaularfjell

It doesn’t matter if you come from the south or North. Coming from the north might be a bit more of a spectacular. But you can always ride up and down again. From a motorcycle perspective, it’s worth it. 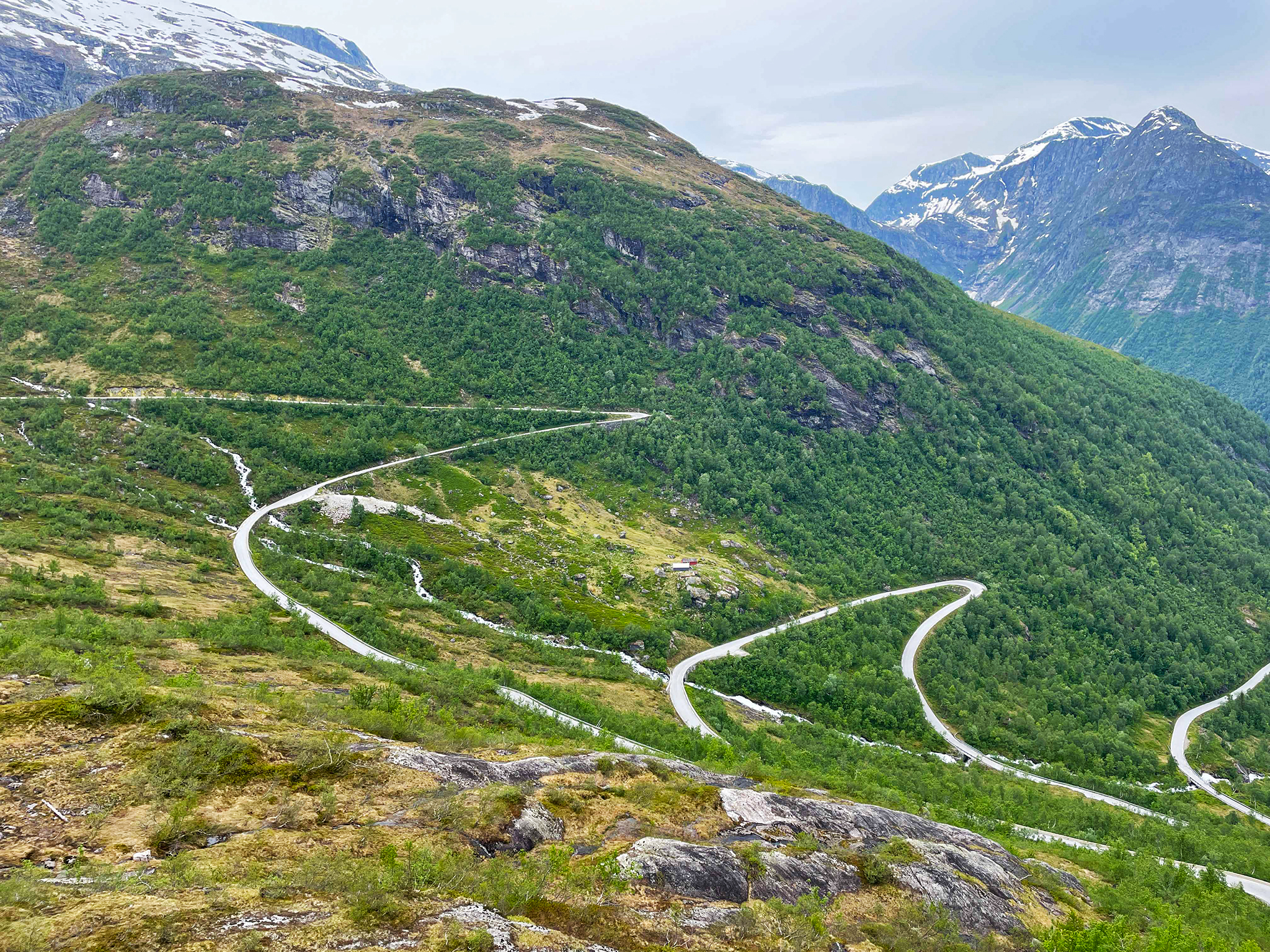 The road south and down from Gaularfjell.

At the vantage point there were only two people. A dad and his son was out for a ride. They were riding pre-WW2 Zündapp motorcycles. However cool, I was slightly more focused on the whereabouts. Below a video capture. Again, I’m  rubbish at filming.

As a result I only do short clips. Know thy limits. But with regards to the vantage point, am I the only one who get a “Titanic” (the movie) or ship feeling with the construction?

Tour de Vestland – return to base

Afternoon morphed into evening. It being in June meant not at all dark. You can be out riding till 10’ish PM, and still it’s only semi dark at the most. We rode down FV13 to Dragsvik ferry place. During tourist season I think there’s a ferry every 30 minutes.  It was virtually empty. Just a few cars, and a couple of fellow motorcyclists. 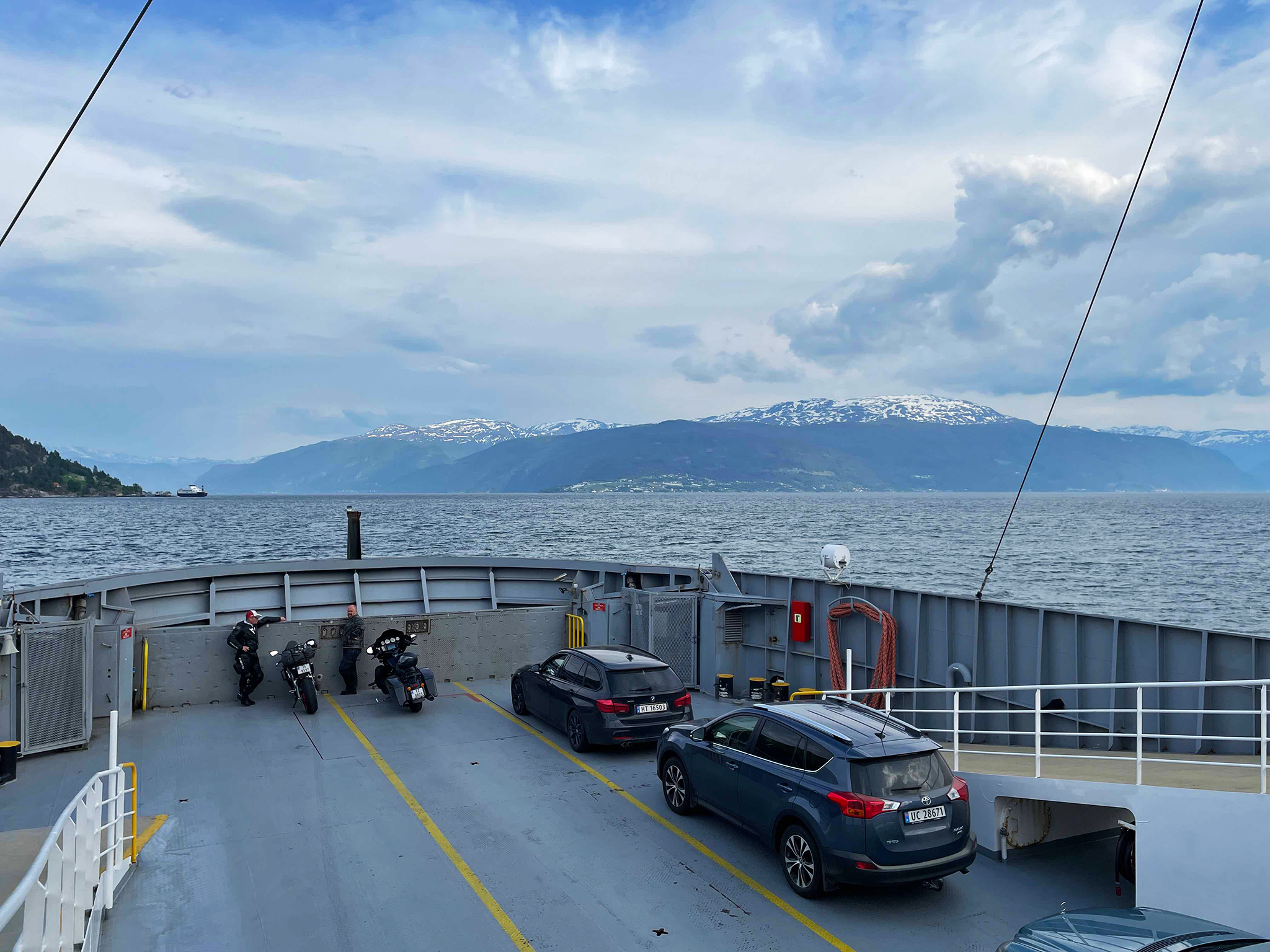 The ferry over Sognefjorden was virtually empty 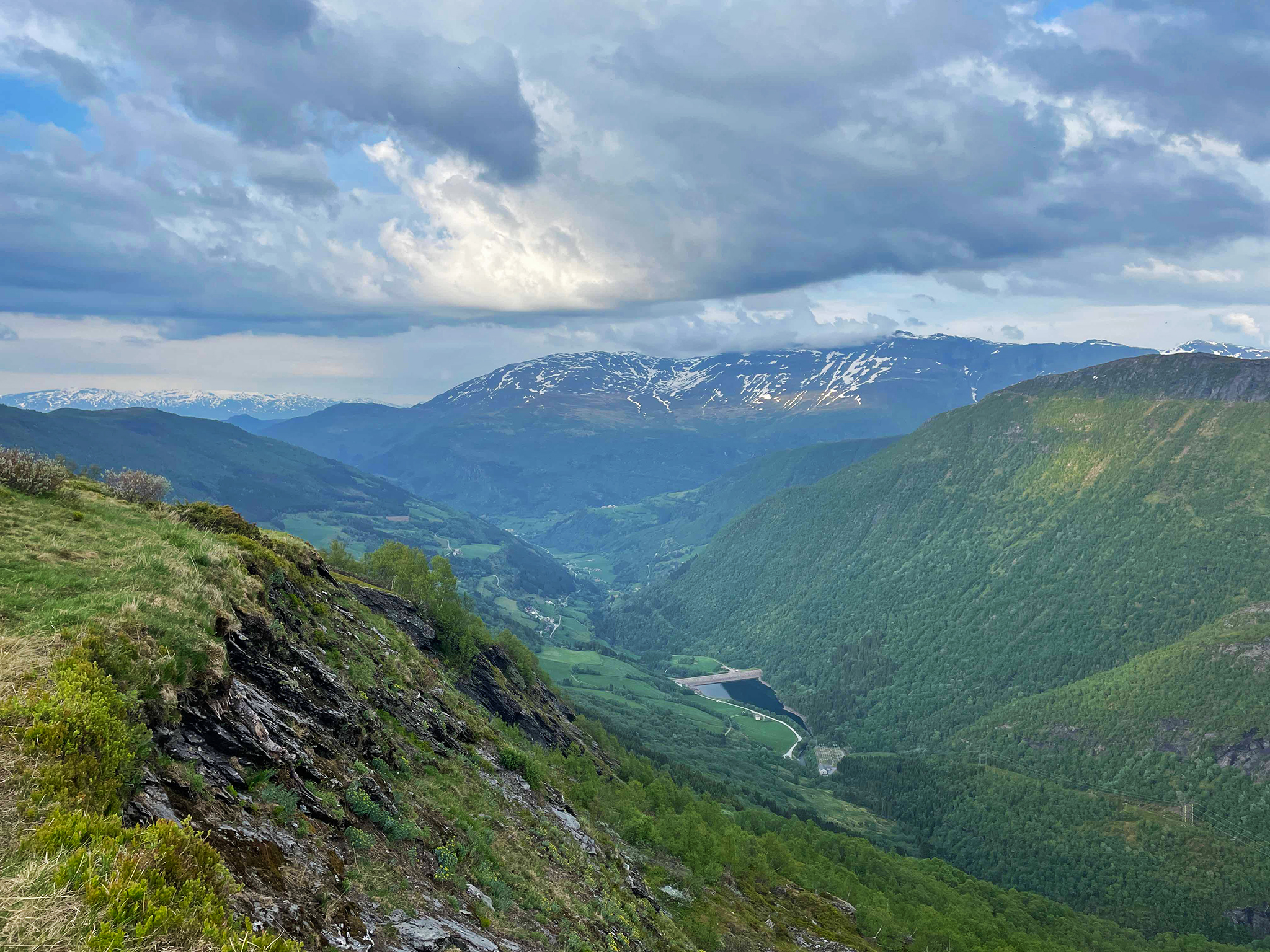 On Vikafjell, on the way over down to Vinje

Over on the other side we took E13 over Vikafjell. Basically the same road I had ridden up two days before. Because it was getting late we rushed down through Myrkdalen, to Vinje and onto Vossevangen. No photo safari this time!

From Vossevangen we took E16. the fast route, to Bergen. And made it back to base late in the evening. Without a doubt one of the best rides I’ve had on the west coast. It had been an awesome day ride. Below a snapshot of the route. 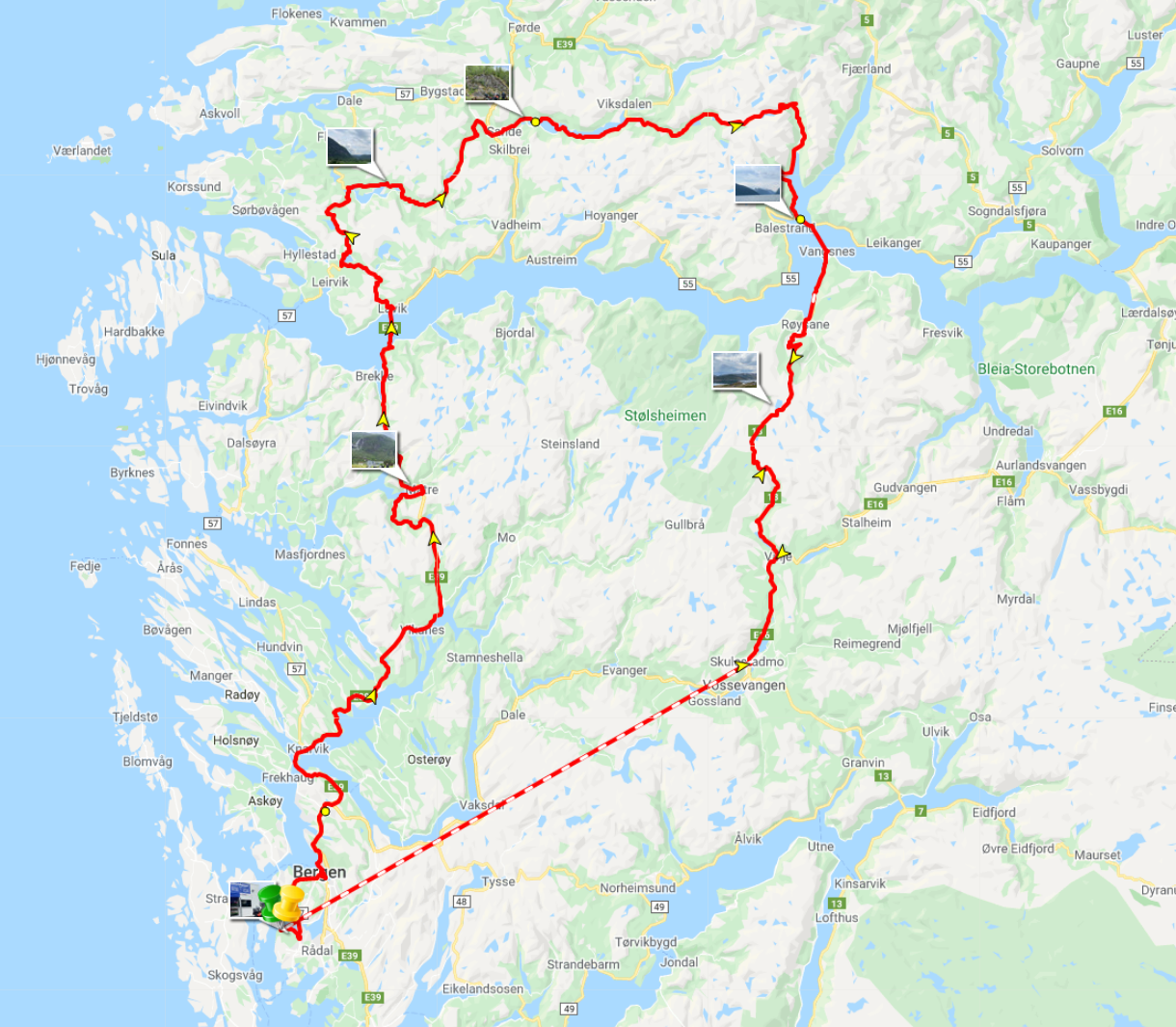 The route. Think I forgot to switch the app back on at some point.

Back soon with more!