Tire-some yet important topic for us who rides motorcycles. I am talking about tires. I see lots of praise, of many types of tires. Most of them more offroad biased, at the expense of tarmac handling, durability, noise and a bunch of other considerations.

A brilliant tire decision, for me

Last year, as the first GSA customer at Norway’s biggest BMW Dealer, I decided to go for Pirelli Scorpion Trail 2. It was ranked as #1 for heavy adventure bikes when it came out in 2015. As a 90/10 tire, which means 90% road, 10% offroad. I can easily understand why. The set has been a success and have performed brilliantly. On all types of surfaces. I’ve done over 14.000 active kilometers on almost all kinds of surfaces. Except mud, done just a little of that (really dislike riding in mud). And to be perfectly honest on really wet mud you shouldn’t be, with a 90/10 tire, or so help you the Almighty.

I’ve been in In 12 or 13 countries during 2017, riding temps ranging from -5C to +35C+. For those who want a dualsport tire, but road biased, look no further. Shred your “AnaScream III” or whatever else you have, and simply go for these.

No, not good, I’d say optimal IF, that is all you do. Occasionally venture out on gravel, or not at all. The Scorpion Trail 2 is a 90/10 tire, and don’t pretend to be anything else. 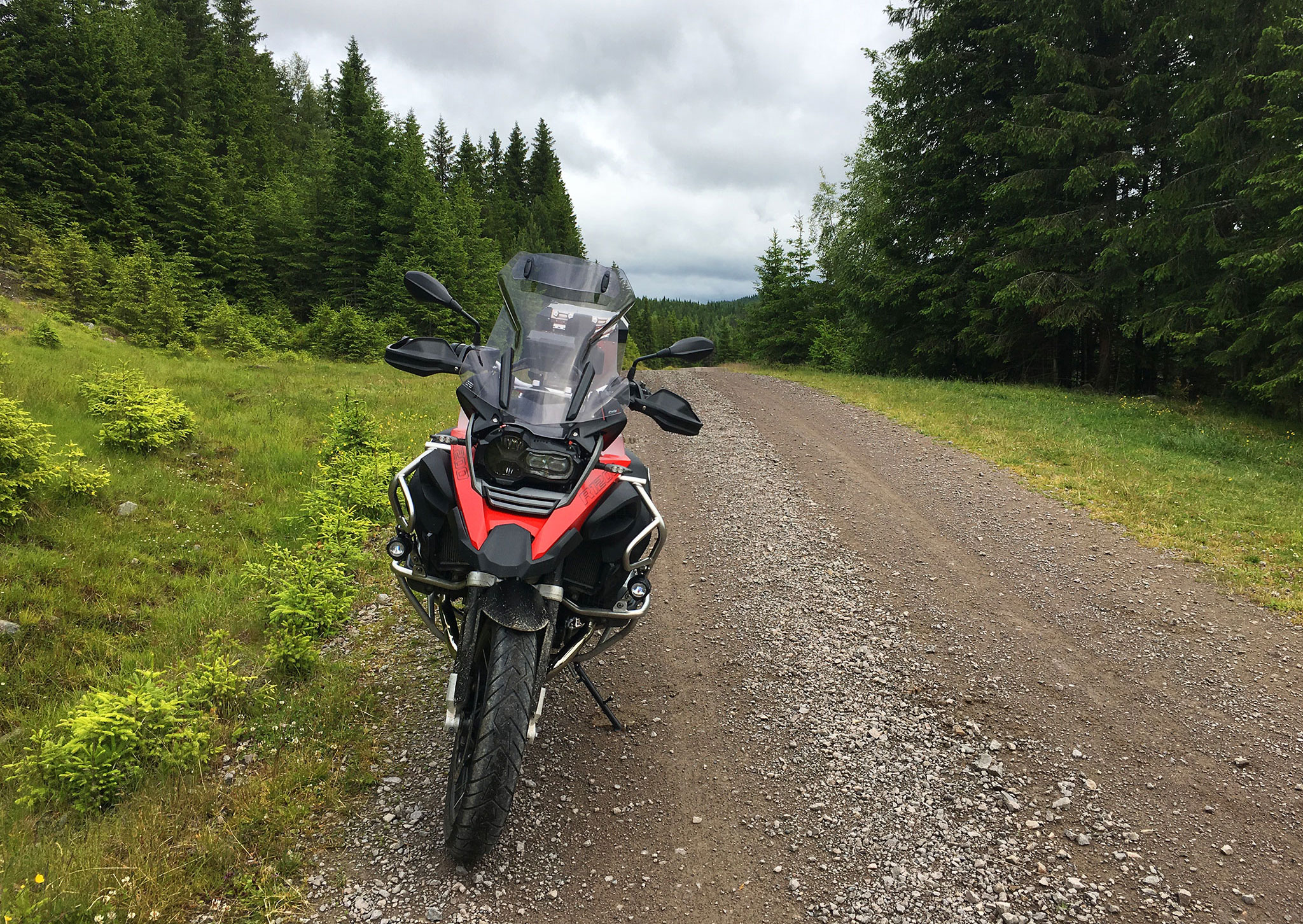 Out in the woods on Pirelli Scorpion Trail 2

You will not be disappointed, in fact the opposite. No, I am NOT paid to give a biased review. Was Scorpion Trail 2 rubbish, I would have said so. Alas no. Even on gravel (done thousands of kilometers on various types), forest roads, mountain roads, they have surprised me.

However, I need to add a few points. The joy does not last forever. Half-way out in their lifespan they are still excellent on pavement, be it dry or wet. Gravel riding is another matter. It has to be added that the not so good experiences came in the later half of the tire’s lifespan.

But as Monty Python say: “….and now for something completely different”.

My country is “littered” with absolutely rubbish roads, like pavement from a different eon. Sure we have good roads, but considerably less than any other European country. Here adventure bikes sell very well (for obvious reasons), the most selling is BMW R1200GS/GSA, followed by Honda AfricaTwin.

For these bikes one needs tires that can do, well a little, or more, of everything.

I am a “fairly active” rider. The sort who might go into alpine curves till the boot scrapes the tarmac, sometimes. The sort who’ve done legs of >900 kilometers, on variable surfaces. One who has respect for conditions, and therefore ride, not entirely without, caution, sense or care.

After much deliberation and a test ride yesterday I’ve decided to try the new Metzeler Karoo street. The test ride was done on a GSA 2018. It had limited value, since i had limited time. I think the off road performance is indisputable (watch the video and read the article).

This tire does represent something new, as Metzeler had to come up with something, new. Looks like they did.

Like to read too? Well try this review, here is another one.

In short: Karoo Street is a 70/30 road/offroad tire, probably the only of its kind right now. I am sure others will follow soon. My concern was road performance, so I took the bike for a boot scraping swing. Suffice to say I am less concerned now, If not entirely convinced.

The reason for the reservation is noise.

I strongly dislike noise, singing tires that sounds like a high pitched guttural choir. Noise that manifests itself quickly and travels up along the front suspension. After my short test I think Karoo Street is more noisy than claimed in the reviews available at the time. But since I have -26db custom ear plugs decided I’ll probably survive the noise, which peaks around 85/90-100km/h.

Hope is that it will subside after having been ridding some miles, we’ll see. Still, in my honest opinion Karoo Street was much better than “AnaScream III”, my nickname for Michelin Anakee III. Which is stock when you buy a BMW GS/GSA.

Near future will tell, and I will be back wasting more fictitious space on questionable blog posts.

2 thoughts on “Tire-some topic (again), and a “bold” decision”