Through Germany to the Harz mountains, that was the plan of the day.  Which meant between 5-600 kilometers riding, depending on the small roads.

One of the many great features of the BMW R1200GS & GS Adventure models is the riding comfort. I like the effortless, relaxed,  no-stress, almost docile way these motorcycles get down the road.  Because of the level of comfort being in the saddle for 10 or 12 hours a day isn’t hard. it’s neither challenging nor difficult to be ready for another similar leg the next day, or the day after that.

If feeling stiff or butt-tired,  I can stand upright while riding. 10-20 minutes worth of standing does wonders. It’s also quite refreshing, all while you have perfect control of the motorcycle.

After an excellent breakfast headed back on the A4 and carried on east. At Lindenthal I switched to the A1, northbound.  The plan was to stay on the A1 past major cities ,like Cologne and Dusseldorf. Then get off and ride smaller roads for the rest of the day.

The traffic on the A1 wasn’t too bad so I made good progress. Soon I was past Wuppertal, at Schmandbruch I waved farewell to Autobahn and went south on a minor road in direction of Breckerfeld. 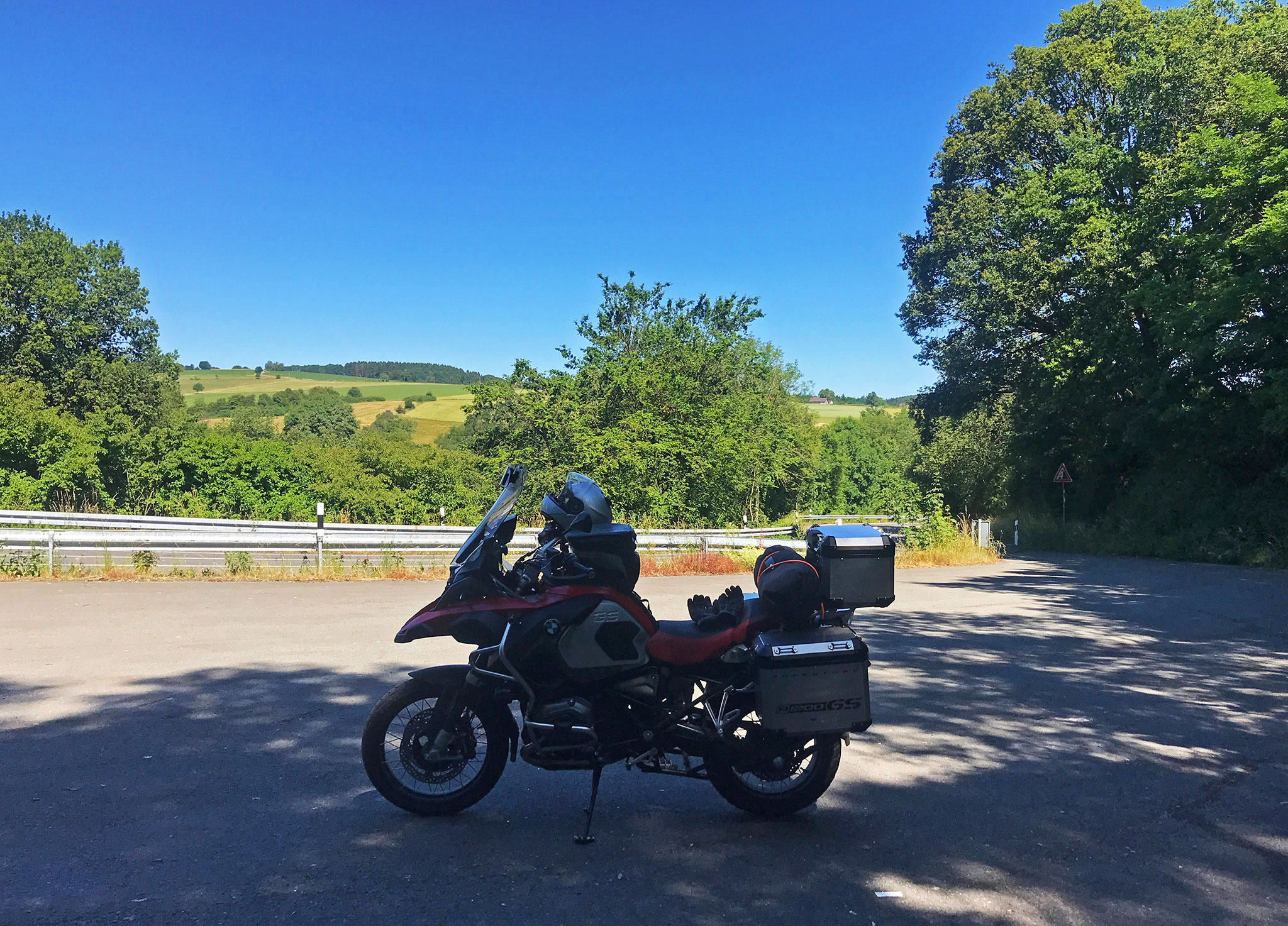 The regions Westphalia and Hesse both have a rolling hills type of geography.  With patches of woods, scattered across the land. No stunning elevations, no Alpine vistas. But if you ride smaller roads it’s quite an enjoyable experience. There are plenty of curves, twists and turns. And narrow passages through dense forests surrounding the roads. Which by the way is excellent. 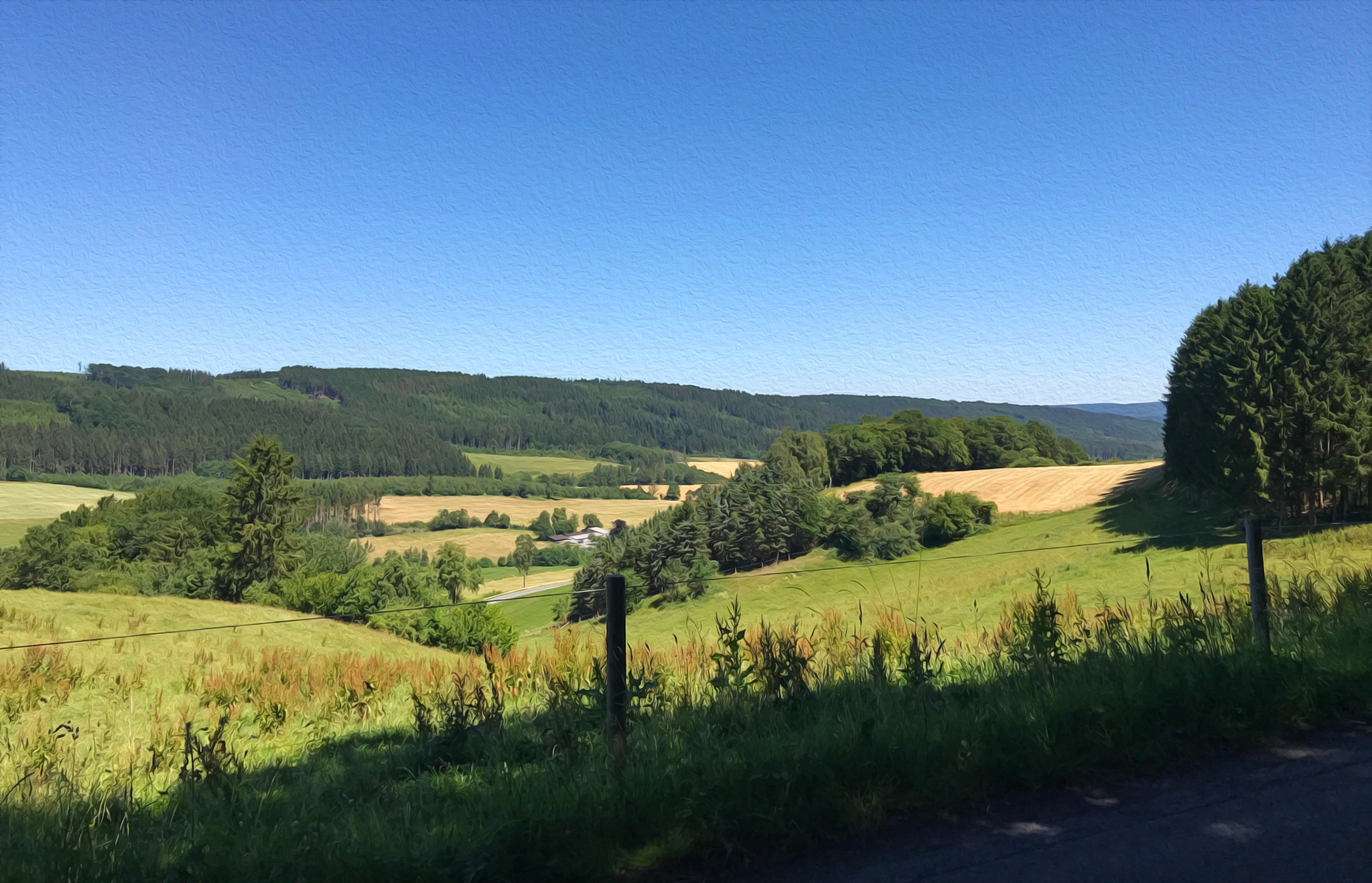 On road Wengeler Höhe north of Niederwald Odin, yeah that’s the name of it.

As a result, and since I wanted to stay on small roads, the progress took me east, then a bit south, a bit north and back east. Just as it should be. Besides. although having been through the regions before, I’d never traveled across this part of Germany, on smaller roads. 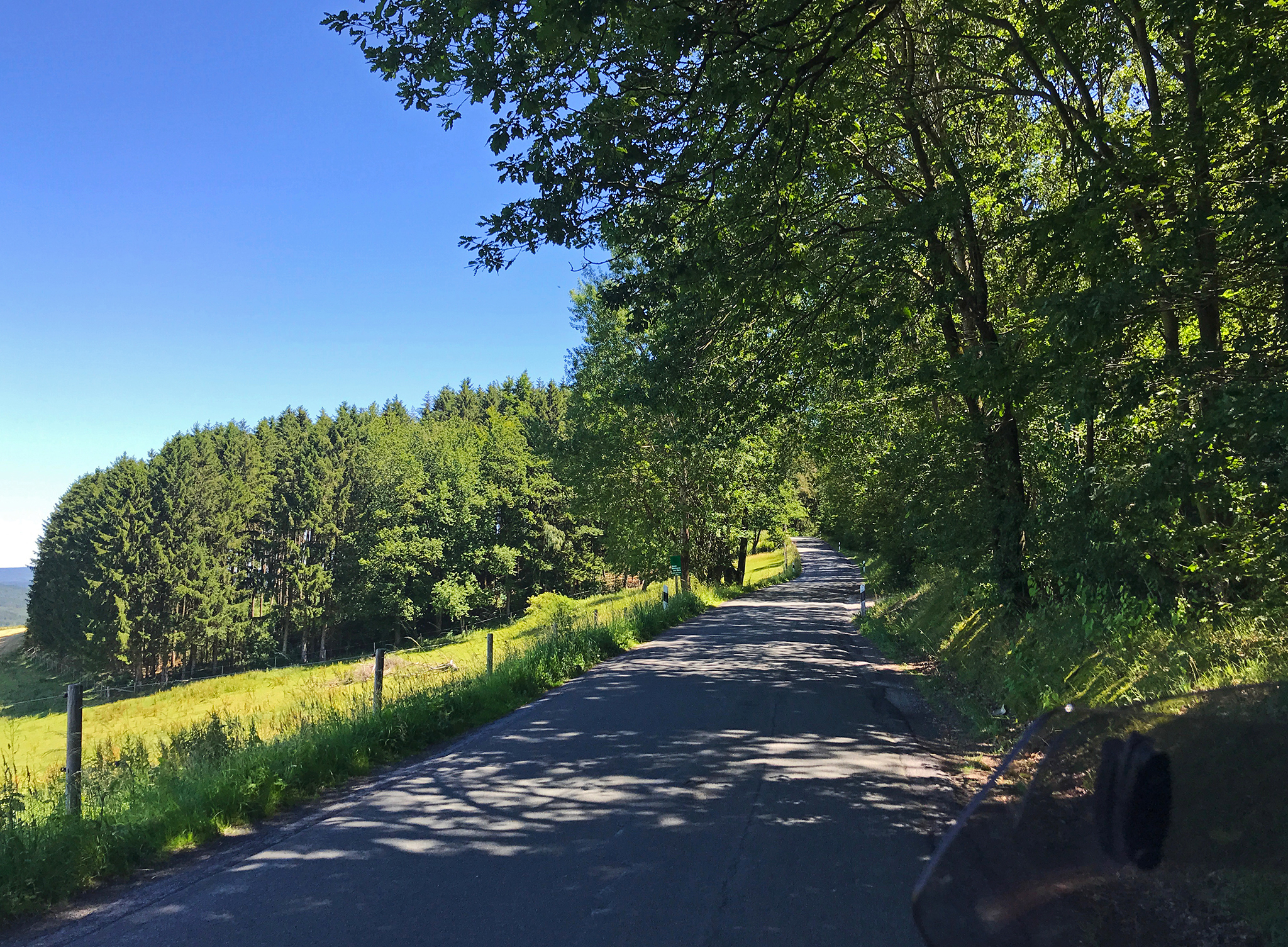 Into Niederwald Odin. A good route choice for a Norseman 🙂

It was lunchtime and past 1PM.  I had done less than 1/3rd of the planned route. Made a short stop at a Hennetaler Hof, a friendly and inviting gasthof in Nichtinghausen.  Ordered a “semi-light” lunch and seated myself in the shades. 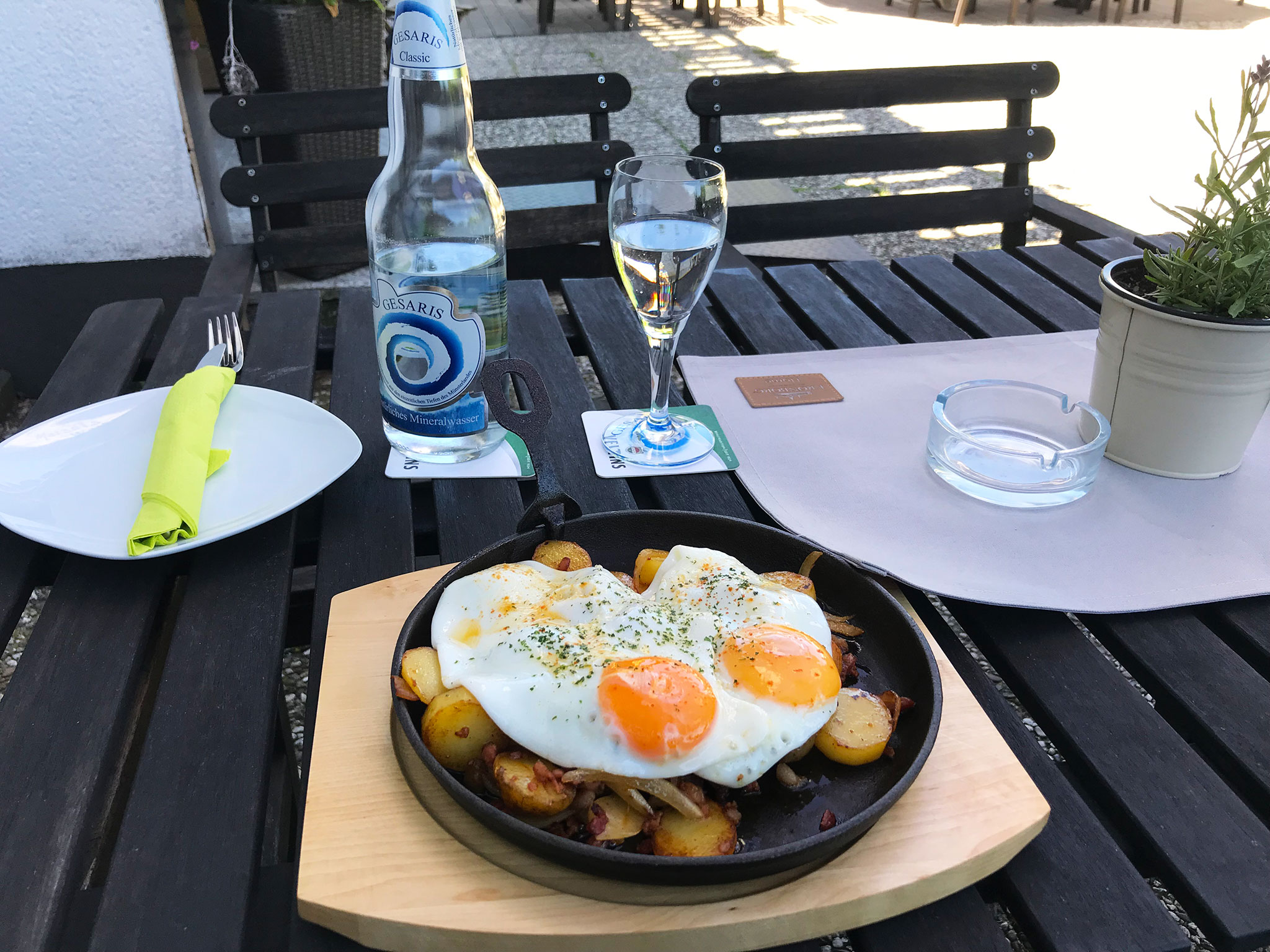 One thing is certain about Germany. Even if you stop at the smallest of places, in villages or at Gasthofs out in the country side, the quality of food and service seldom disappoints.  Hennetaler Hof was no exception.

The temperature had climbed past 30C.  My mesh jacket and mesh pants made it tolerable.  Back on the bike I rode along lake Henne to Meschede, then south along L740 to Winterberg. Didn’t stop, carried on primarily on back roads, in a northeast direction. 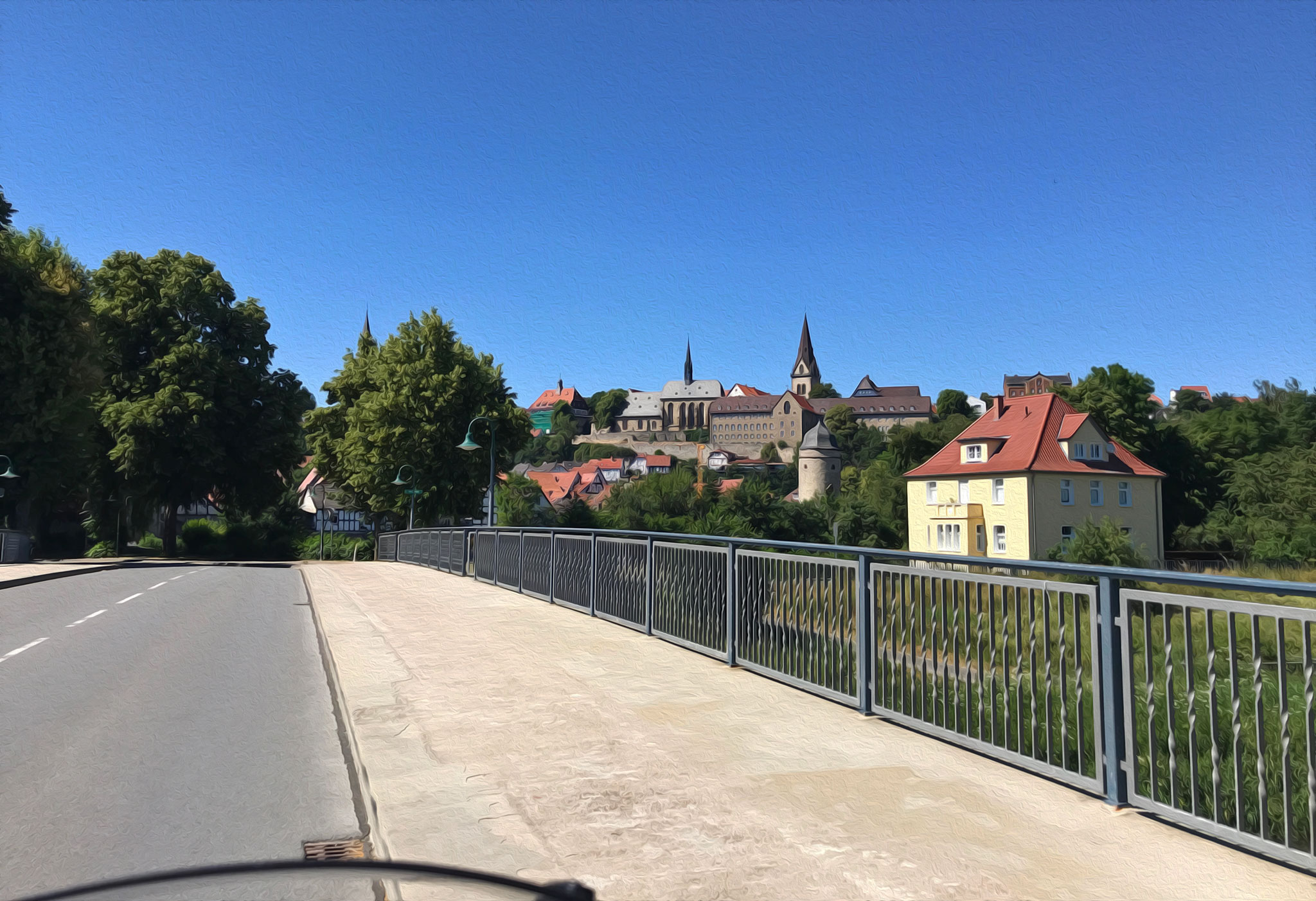 The city of Warburg, seen from the bridge across river Diemel

The city of Warburg sits by the river Diemel, near the three-state point shared by Hessen, Lower Saxony and North Rhine-Westphalia. Warburg has a history that dates all the way back to 1036. I thought about making a stop, but it was too hot.

Instead I rode into and through the town, past some of its older buildings. Like old German cities Warburg was full of well kept, no astonishingly well kept buildings.

Leaving Warburg behind it was past 4PM. Had to speed up if I were to make it to my destination before too late. I had decided on a hotel and booked a room. Not cheap but with plenty of good reviews. The GPS suggested I had a good 3 hours to do of small roads riding. 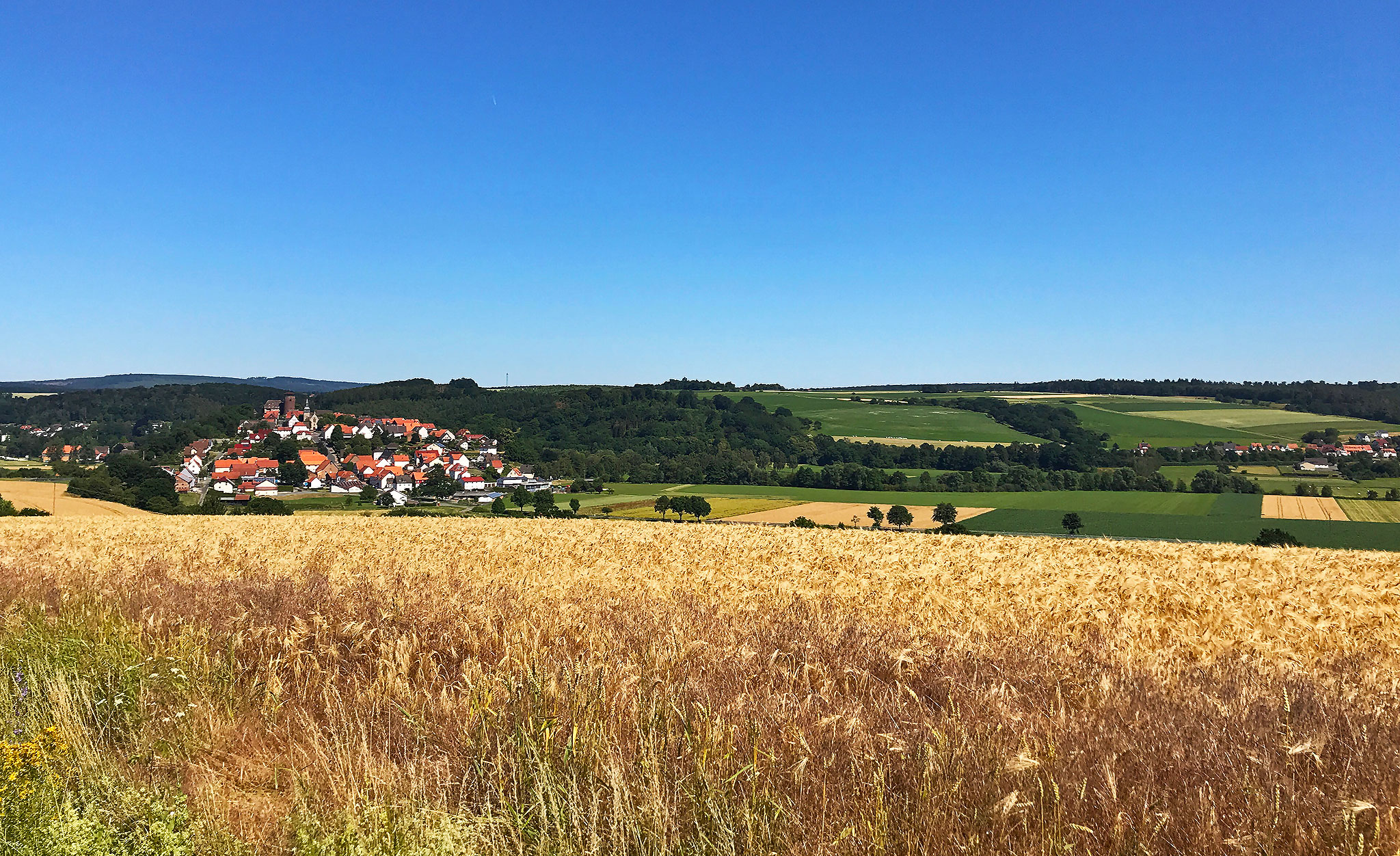 I continued through the countryside, across farmlands, in direction of Gottingen. You’d think it would cool down as afternoon moved closer to early evening. But the opposite happened. I’d been warned, this was undoubtedly caused by the African high pressure that had, quite literally, fried France.

Didn’t check but I reckon the temp maxed around 34-35C. Towards late afternoon it dropped a little bit. Around 6:30PM as I came into Weda, which sits on the western side of Harz. 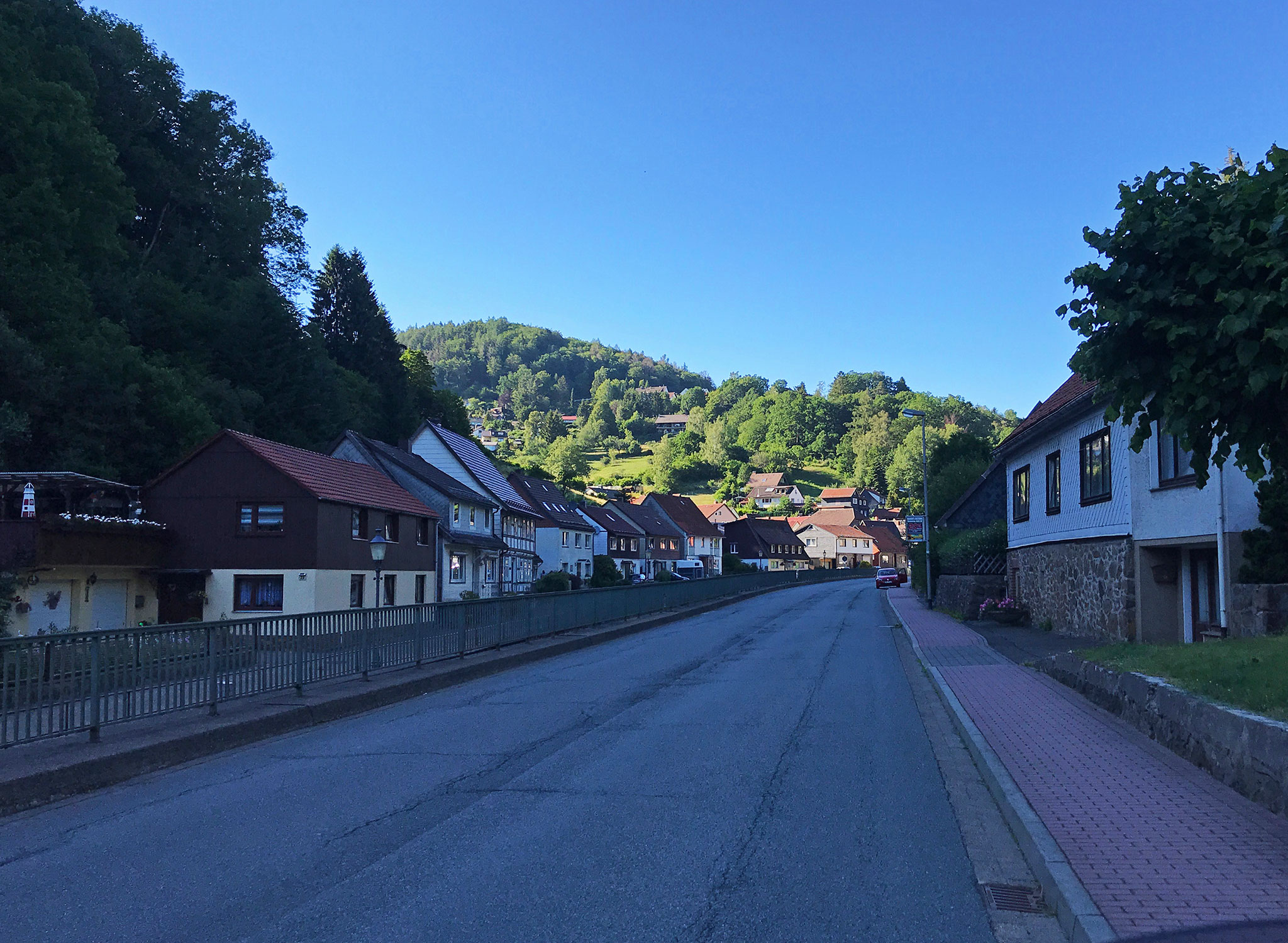 Soothing, colder air poured down down from the mountains. I rode across, through forests on the L601. The air stayed cooler until I came down on the other side. Riding into Braunlage the temp climbed up a bit again. But it didn’t matter.

Minutes later I parked outside Hotel Hasselhof. Unpacked, had a shower, slipped into shorts and sandals, then trotted into town to stuff my face. The next day would be spent riding around in the mountains and explore the area.

The forecast suggested it would be a hot experience. That you can read more about in the next post. Below the map and route of the day.

The route of the day. Arrows indicate beginning and end.