Around mid-July I set out on what would turn out to become the best Motorcycle adventure ever. And, the longest! Alone, like last year.

One friend is a candidate for joining in on such adventures but it did not work out with his schedule. April 3rd this year I got a BMW R1200GS Adventure. It’s every bit as good as I hoped it would be.

A motorcycle adventure isn’t for everyone

Indeed no, but still for the many. Also those who have not yet tried, but perhaps dream about it. Some doesn’t tire or become exhausted by all the riding. Some do but what you ride matters a whole lot. How you ride, matters equally.

In that respect I was better equipped than before. Stress and you will be stressed. Relax and you will remain relaxed. Still, I wasn’t entirely certain the new bike bought this year would be the right one, for me that is, and a project like this.

Turned out… it was. Times two.. or even three. Sweden is loaded with twisty backroads, gravel and pavement. I took these “smallways” for the most part

To tell you the truth, beyond the first, and half of the second leg, I had no plan. Why should I have a plan? The one thing about a motorcycle holiday, that sets it apart from most other vacation forms, is the freedom. The freedom to adapt, to change direction, change plans. In brief, the freedom to improvise.

Still, I did have some goals with this expedition;

But before that – Sweden

Last year I took E6 (Europe road 6) all through the country.  A pretty boring route. One gets to see little or nothing. So this year the aim was, take it easy, take “smallways”. See and experience more of “grannelandet” (Swedish for a neighboring country).

Our countries are connected with lots of roads in the “smallways spectrum”. Some in fact so small you hardly notice that you’ve crossed the border. This year I took one of the smaller, not the most exciting in the beginning but once over the border I started to zig-zag. What it looks like when you take one of the older, smaller roads across the border

It always helps, starting off on a motorcycle adventure, that it’s sunny, and decent summer weather. Makes for more enchantments, more pleasant riding, especially on backroads. While heading south I ventured through greater parts of the Swedish countryside. Areas never seen before. Much thanks to the good weather it was indeed a great experience. 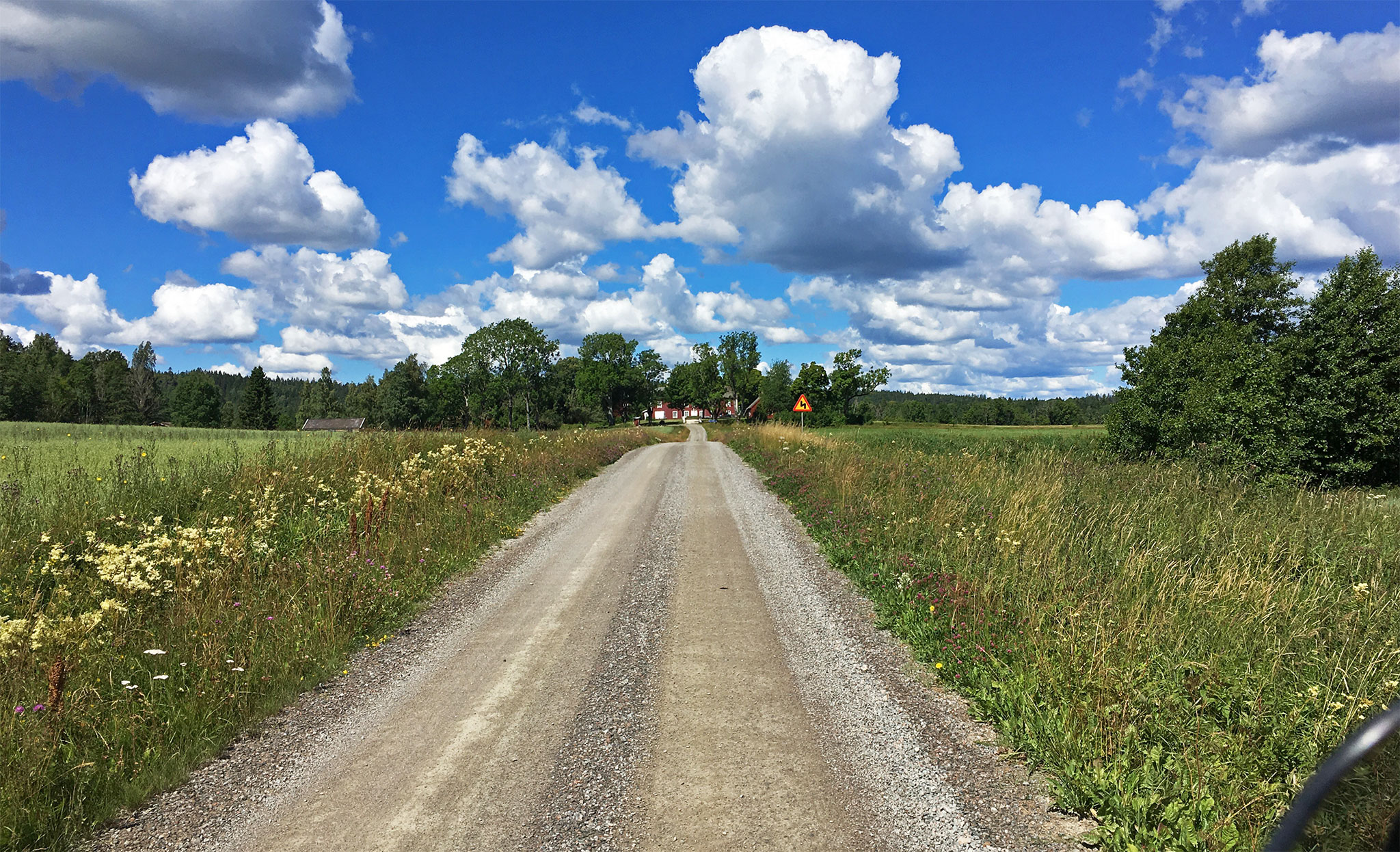 Swedish countryside seen from backroads, here on gravel which my bike handles very well, even with luggage.

Sweden has approximately double the population of Norway. People live pretty widespread in the more southern parts, even if, like everywhere else, a lot live in cities. As a consequence, southern Swedish countryside is a lot less deserted than you might expect. Taking a break, at a sort of surprise one definitely will miss by not taking smallroads.

When you take time – it flies

Having so much fun on Swedish backroads I spend the greater part of the day. Later in the afternoon I was forced back on bigger roads. But keeping the pace reasonably down and avoid stress still made it an enjoyable ride all the way. 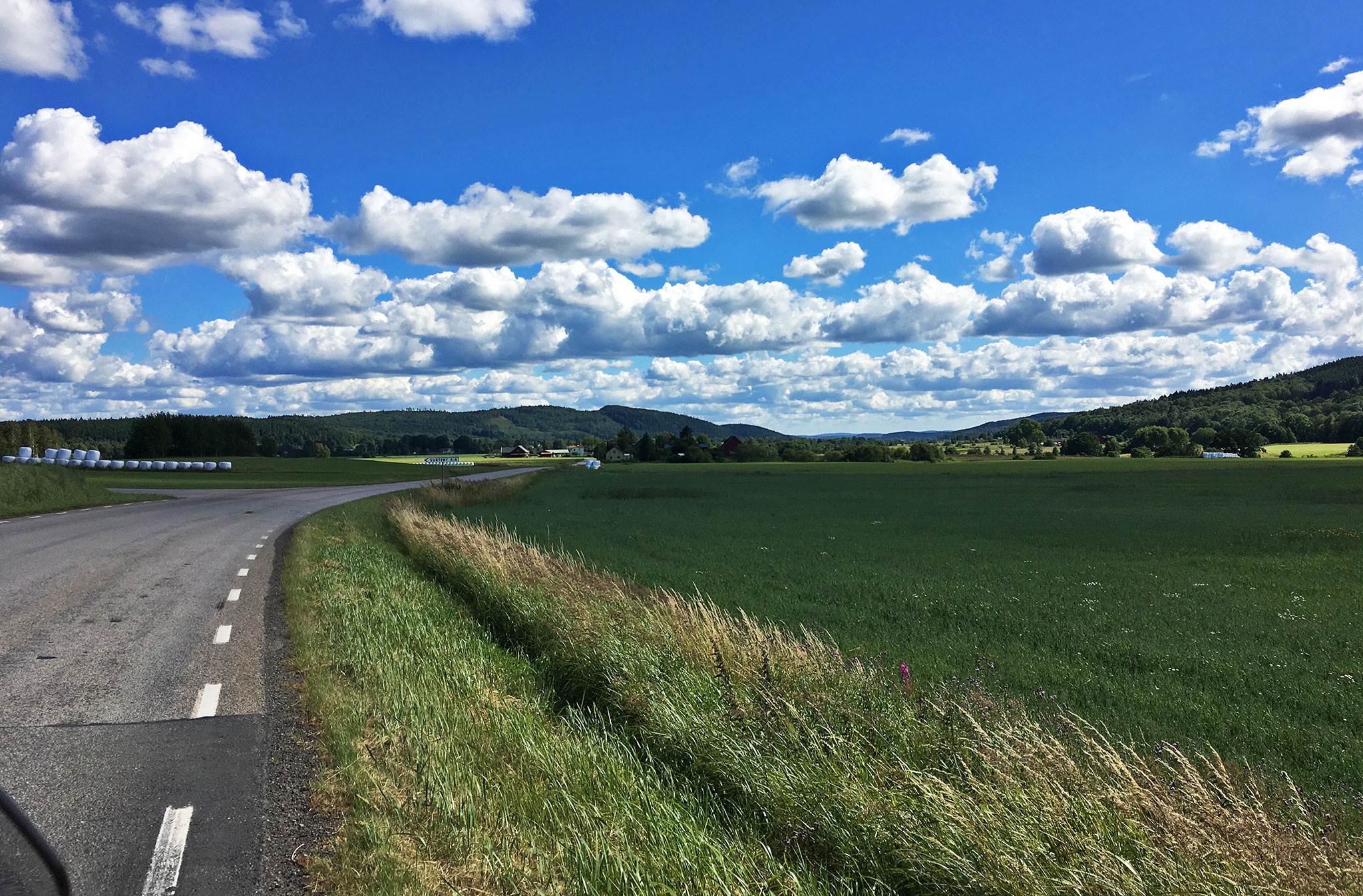 Early evening I met my Swedish friend in the charming little southern city of Landskrona. Parked the bike in my friend’s garden and with that day 1 of the adventure came to a pleasant close 🙂 My new motorcycle had passed the test as a long haul machine. A great day’s worth of experiences indeed!