Saturday morning. Woke up, got coffee brewing going. Gave CAT medicine. Then fed CAT (in that order). In retrospect maybe fed CAT a bit too much. It happens. Shit happens, sometimes shit happens without shit.

CAT-shit happens without shit. Sometimes. I’ll come back to that, and CAT shit a moment. 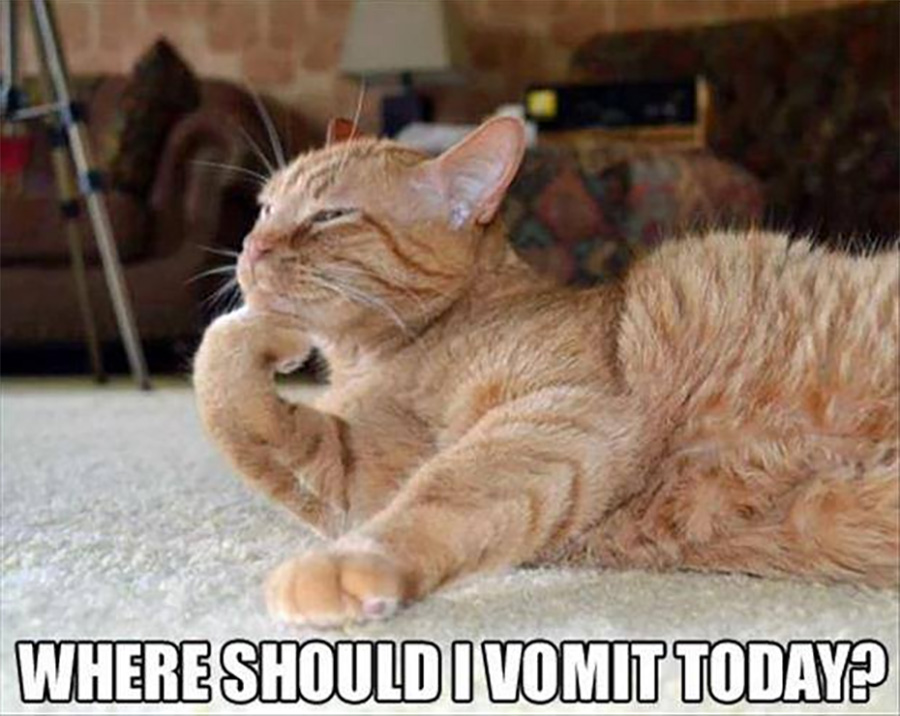 While typing this I realize, maybe a long moment. You’re outta luck. You are stuck now. Try scrolling and you’ll lose out on lots of good shit.

Our CAT has expensive dry food in his bowl all the time. Price per kg or lbs is astronomical. He can’t eat standard food. But must have hydrolyzed cat food. He likes it, thankfully. it tastes good. This I am assuming, since he eats it.

But regardless, he (always) cries for soft food, or whenever it suits him. In the morning, daytime, or afternoon. He follows us into the kitchen. Sometimes CAT just sits on the floor in the kitchen, or stands on all four, staring at the empty bowl. He can stare at an empty bowl for a very, VERY long time. Or till he’s convinced he might win something. Or we pity him.

I pity him sooner, and more often than the wife. The excuse is, he’s old. Suffering from Hyperthyroidism he needs both meds and lots of food. I sometimes gives him more than enough. Like this morning. Well enough CAT for some seconds, minutes, whatever. I can’t know if you decided to stop reading can I? Well anyway…

On this Saturday morning I prepared usual low-carb breakfast for myself. Begins with a few spoons of Natural Yoghurt (no sugar). The white Yoghurt, with no additives, no other taste than Yoghurt. Some doesn’t like it, but I do. I eat very little sugar. Check every food package for shit and sugar.

There we have it.

So after the (few) spoons of plain, natural yoghurt grabbed the usual two moderate pieces of ry & rough crispbread, with absolutely nothing on them. Plus a banana. It’s the standard, the norm, also on the 5:2 fast days. I need to get that going next week. The 5:2 fasting. it works. Takes forever to lose 1/5th of a pound, but it works. The belt holes tells me it’s high time. To get started.

Now equipped with the low carb breakfast, plus coffee head up to the home office. In this house the Mrs has her home office on the ground floor, I have mine on first. This means we can’t yell to each other. Well effectively. We do yell, ineffectively. So if I want to say something to her, or understand what she’s about, I have to go down the stairs, and up again. It’s practical. Cause then I don’t have to yell.

Saturday by the way

In the US, the first floor of a building is also the ground floor, but in Europe the first floor is the floor above the ground floor, and the second floor is the one above that. This is important information for novice American travelers trying to find their hotel rooms. Or if you ever visit us. And here it’s more difficult, since it’s a) not a hotel and b) one is American, the other a Norwegian. So we very often don’t know where we are, and therefore we can’t help guests. Yes this is bullshit.

It does happen the wife messenger or text me. Sometimes because I use headphones. Especially when I play the keyboard. I more often than not don’t like anyone to hear what I play. Maybe because i don’t really know what I play. Some call that improvisation. Or Jazz. It’s a good name for stuff you don’t know what is.

Maybe those who play don’t know either. Therefore It’s all jazz. Truth is, most who plays jazz knows they’re playing jazz. Those who listens to jazz knows it’s jazz. Even those who don’t know it’s jazz, calls it’s jazz. Because it doesn’t sound like something they like. Ergo sum. Jazz is bad. No it isn’t, jazz is good. Jazz is life, and life is jazz. Jazz a universal language. Several races in the Universe plays jazz. it’s non-proven fiction.

Jazz is a universal name for music many on planet earth don’t like. Because of the double Z in the name. Which happens to be the same reason why alien races likes the word. And the music . Because of the 2 Z’s. It’s a fact.

Seated myself in the home office in front of the old come-pewter. On this Saturday morning. With the low carb breakfast. It’s a very old come-pewter. We have a natural talent for low consumption in this house. Some signs are, most of our stuff is old. Our phones are old. Sorry Apple.Sorry “Made in Chinesia”.

We buy shit, but we keep shit for long. We even keep shit that doesn’t work anymore. Because who knows, one day, automagically, it might start working again. You can’t know that if you throw shit away can you. But most importantly, by accumulating old shit in your house, it doesn’t end up on a dump. If there are many people like us, and I absolutely have reasons to belive this really is a fact, then there’s an awful lot of shit we don’t see. Am I clever or not… yeah right.

Where was I. Yes…

While eating my low carb breakfast this very Saturday morning, CAT ate his high carb breakfast. Probably double the portion he really needed. No I am confident, triple of what he really needed. While he gulped down the triple of what he needed I read the (usual) bad morning news on the come-pewter. While chewing nibbling the dry crispbread, accompanied by a banana bite, now and then.

another somewhere I don’t know where is, or what was, that reading bad news for breakfast supposedly is bad. If not as bad as most of the crap you read, then comparably bad, to good news. How rational.

But you know, when you read, digest, consume bad news all the time, it gets to you. One reaction is, it’s getting you down. Or you build psychological defenses to resist the ever-lasting current of bad news. I think it might be a spinal reflex. A survival thing. Some gets this defense up a bit late. It can severely affect their life. Their life quality.

Some bad news however, might be a reality check. Other bad news is, well just plain bad shit news. Then you have fake news. How the hell can something which is fake, be news? It’s fake dammit! So it’s not news, it’s just.. SHIT. It’s sometimes hard to tell shit and news apart. So then it’s fake. Ah… I get it. Hmm..

We should perhaps read less shit. But how can you stay informed, if you dont read, also shit? You can’t know it’s shit before you’ve read it. And also, fact-checked, if indeed it is shit, or not. Shit-Check. it’s the next bit thing. We have those media here as well. But it gets difficult , when even the fact checking is shit.

Therefore, the shit is…

you must read shit to get, or see, past shit. Just don’t eat too much shit, and you’ll be fine. Some actually survives on shit. Whether the shit they read, or the shit they eat. From one type of shit to another.

Done with (mostly) bad news, on this particular Saturday morning, I began to read FB feed. Friend’s posts. Or, those I get to see. Facebook’s algorithms have fucked up my feed. Yours too. Severely. Nowadays you don’t even get to see stuff you want to see. But more stuff Facebook wants you to see. Or less stuff, and more shit. Ads you know. They track us, wanna make money off us. They manipulate us. All the time. Even when we don’t know we’re manipulated.

You share shit right? We all share shit. Fact check your shit before you share it, and you’ll find out. Sometimes nothing at all. So this morning, I wrote my own shit. How lucky are you! Because the time you spent reading this, you could be sharing shit!

Saturday morning & off on a tangent

It’s what the sane call rambling. It’s because of the second coffee. On this Saturday morning.  Or because it’s Jazz. It’s Verbal Jazz. Make a note of that. It might not be the last you’ve seen. Got scared? Consider to unfriend me ASAP! Once upon a time I was a talkshow host. Paid to do Verbal Jazz. The less planned, or the more improvised, the better it was. kinda miss that. Sit in front of a mike and talk. To people. Then all shit is good shit, and shit is Verbal Jazz.

I’d pressed reload on FB and scrolled the usual five or six scroll-miles when a cat meme appeared. I see a few of those. But that’s deliberate. I subscribe to some groups posting a lot of those.

So on this particular Saturday morning I saw one that had me grin, then laugh. Then LOL. A meme with truth well known fact to cat owners. Something we just have to be prepared for. Those who give CAT more than CAT needs, or the wrong stuff compared to what a CAT really needs, should be prepared more often. More often than just on a Saturday morning.

So there I was, first grinning then laughing. Suddenly from downstairs, I heard some noises. Oh CAT..? A sneeze then a BLEEEH.. sound. I go down to check. Suddenly the question the meme asked, was answered. Fortunately, he’d done it on the wooden floor. Not a carpet. Thank you CAT! 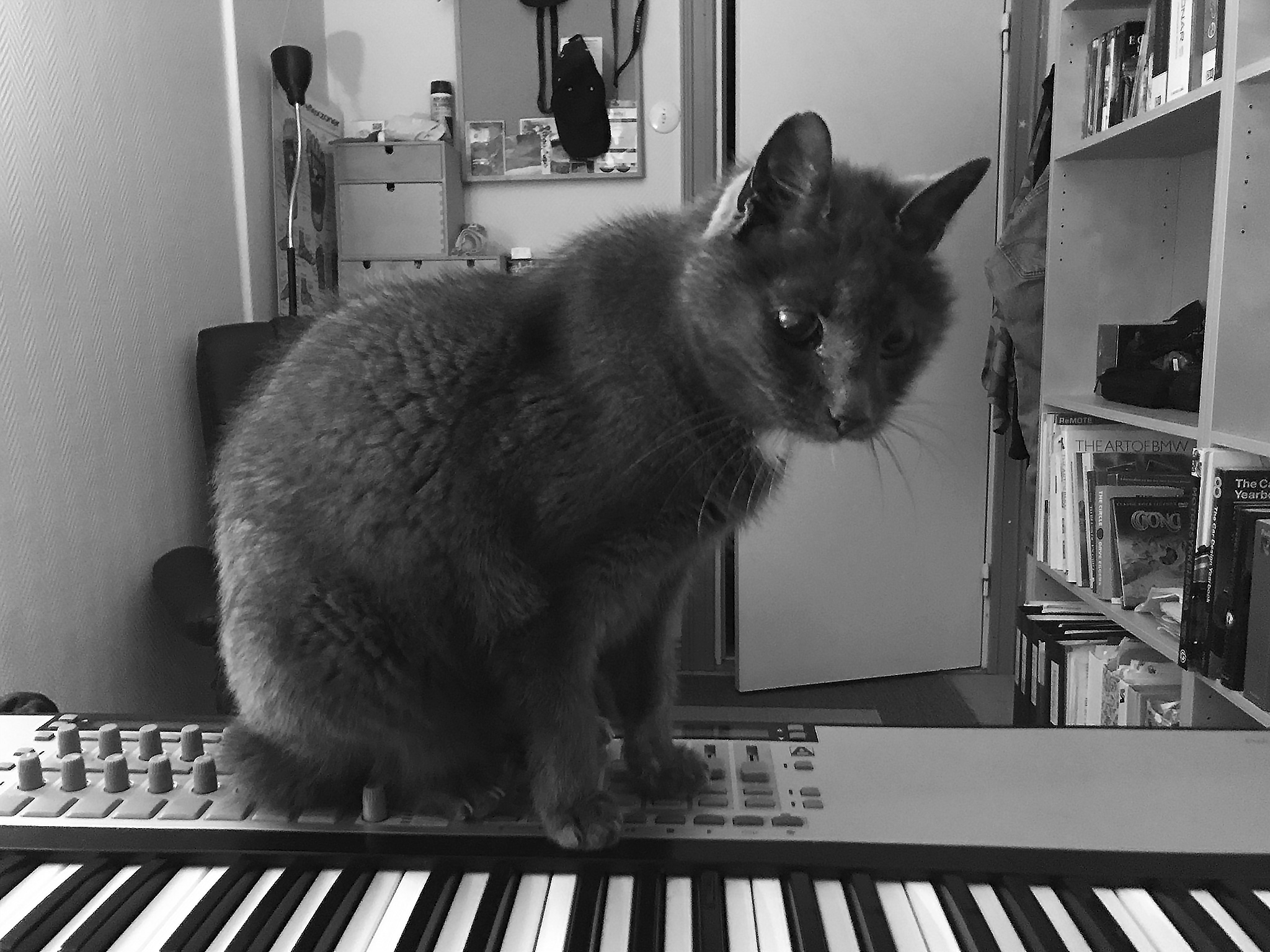 CAT looking anything but guilty

The morale to all of this? None. But every so often even a silly meme might prove to be true. In the very moment. It’s a fact. It’s not fake news.