Offroad or gravel and dirt riding can be an exhilarating experience. Maybe at times too exciting. But if nothing else, it makes memories!

Memories Indeed. I will not easily forget what happened in Italy September 2021. But first lets get through…

Assietta is a road many “pedalists” flock to. So also on this Sunday. Most of them ride with their senses intact. And move aside. So does those with 4x4s.  Where they can. But traffic can slow you down. And disrupt the riding flow. Being early might help avoiding traffic. 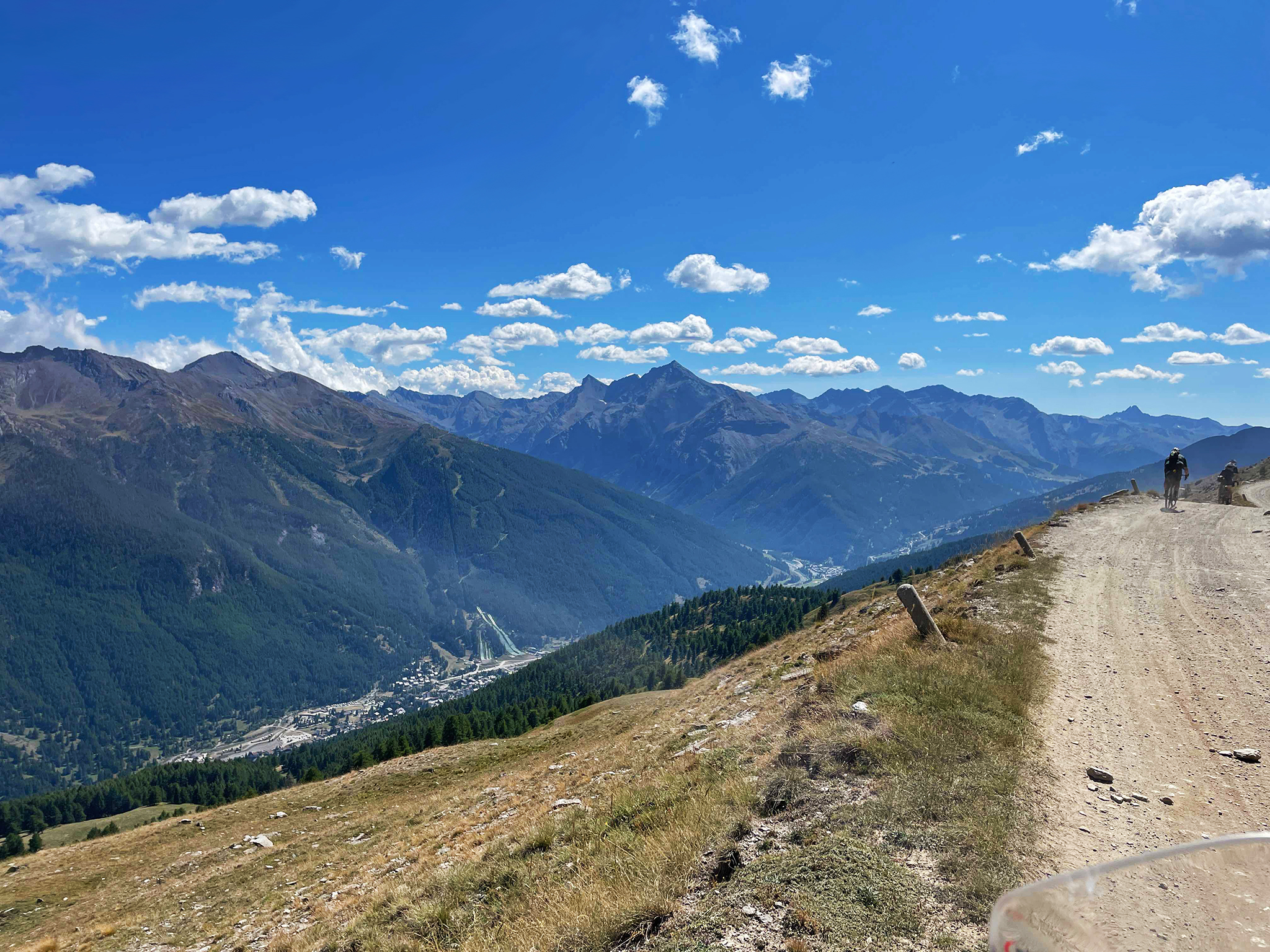 Bicycle riders on Assietta ridge road. It’s not as flat as it looks!

In July and August Strada dell’ Assietta is closed for motorized vehicles Wednesdays and Saturdays between 9AM and 5PM. A late afternoon ride could be a good solution. I reckon though many will aim for a late ride. More of late riders than early birds potentially. 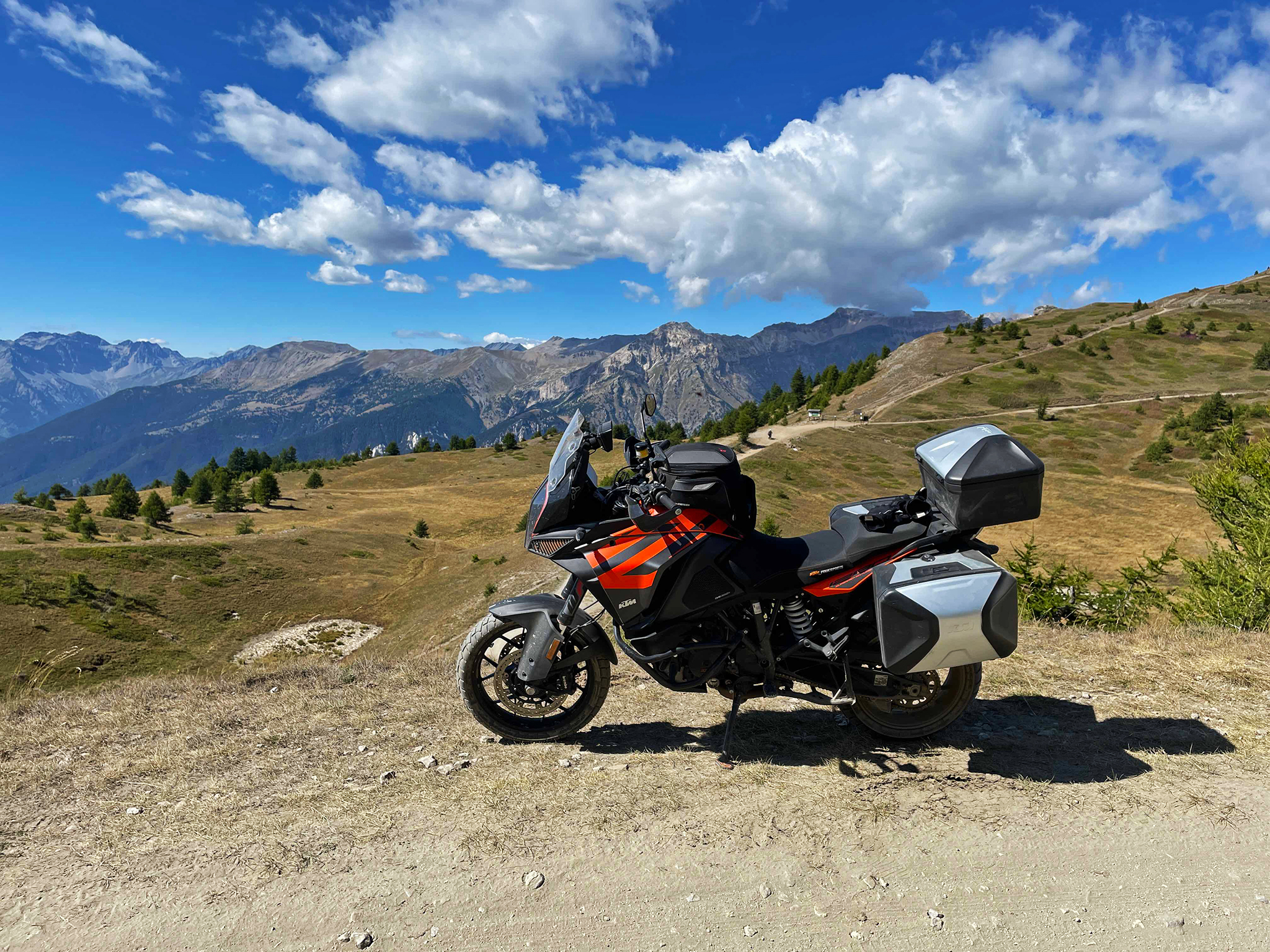 Having passed the high points and taken in nearly an overdose of vistas I began the descent. Down on the other side of the ridge section the road is good fun.  More dirt than gravel but fun. Dry when I passed, can imagine it might be a bit more challenging if wet. 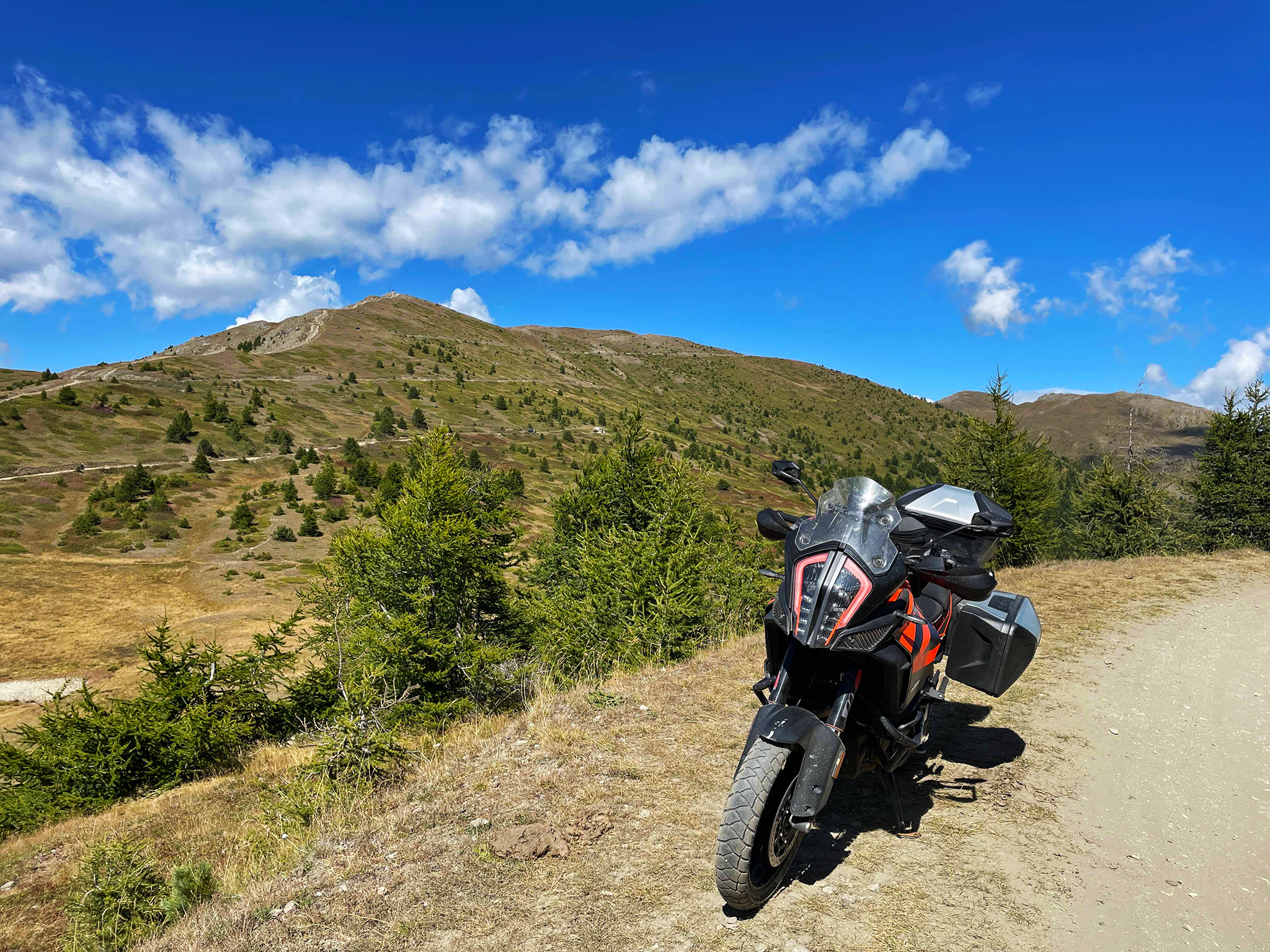 Last section of Assietta, at the treeline.

Finally I arrived in Sportina, which is a touristy place with lots of ski lifts. Packed with people, not so strange it being a Sunday. So there you have it, avoid Sundays! Had a lunch there and digested the experience. It certainly felt like an accomplishment.

But as it would turn out, nothing compared to what awaited me.

Offroad and a bike drop

Before departing I booked hotel Cima del Bosco in Sauze di Cesana.  Price was good, reviews decent. So set GPS and rode off. After a little while I began to have second thoughts about the route. The road was pretty narrow, and had turned into a mix of sand and gravel. Then the GPS conked out.

The “road” then became a sandy enduro track. Damn! Too late I realized it would be impossible to get back up again without a risk of falling over. So I continued down. The track got narrower, with more rocks, and deep tracks. Assietta seemed like a freeway by comparison.

At the beginning of the worst incline of all, the rear brake conked out. It took me by surprise. The front wheel slid on top of some rocks . I lost balance and dropped the bike. 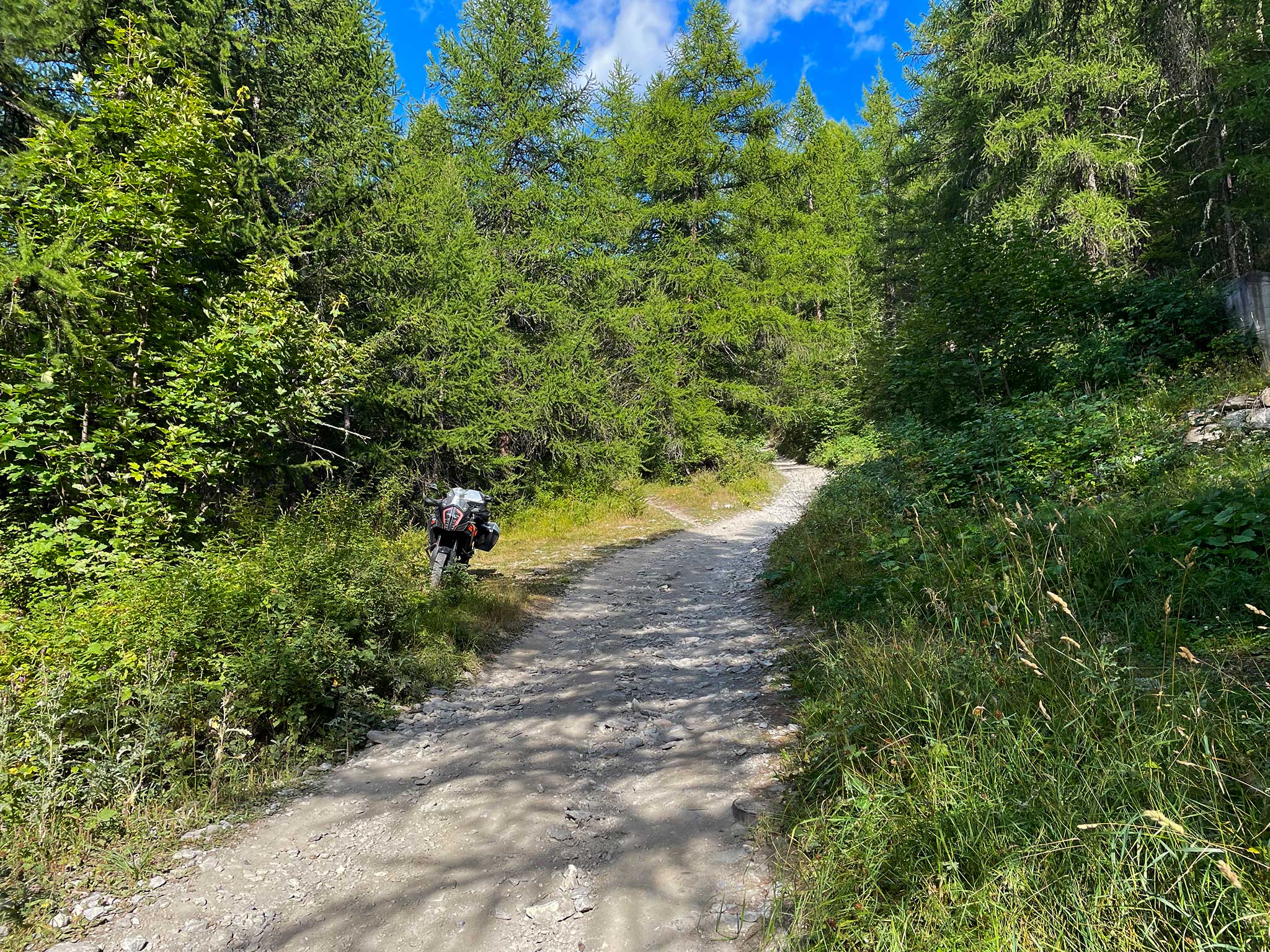 Very steep here. But got the bike up, and parked on the side

Apart from that, no drama and no injuries. The bike seemed to only have cosmetic damages. The cheap crashbars from Motea had done the job. Left pannier was torn off. It took a hit which probably also protected the rear of the bike. 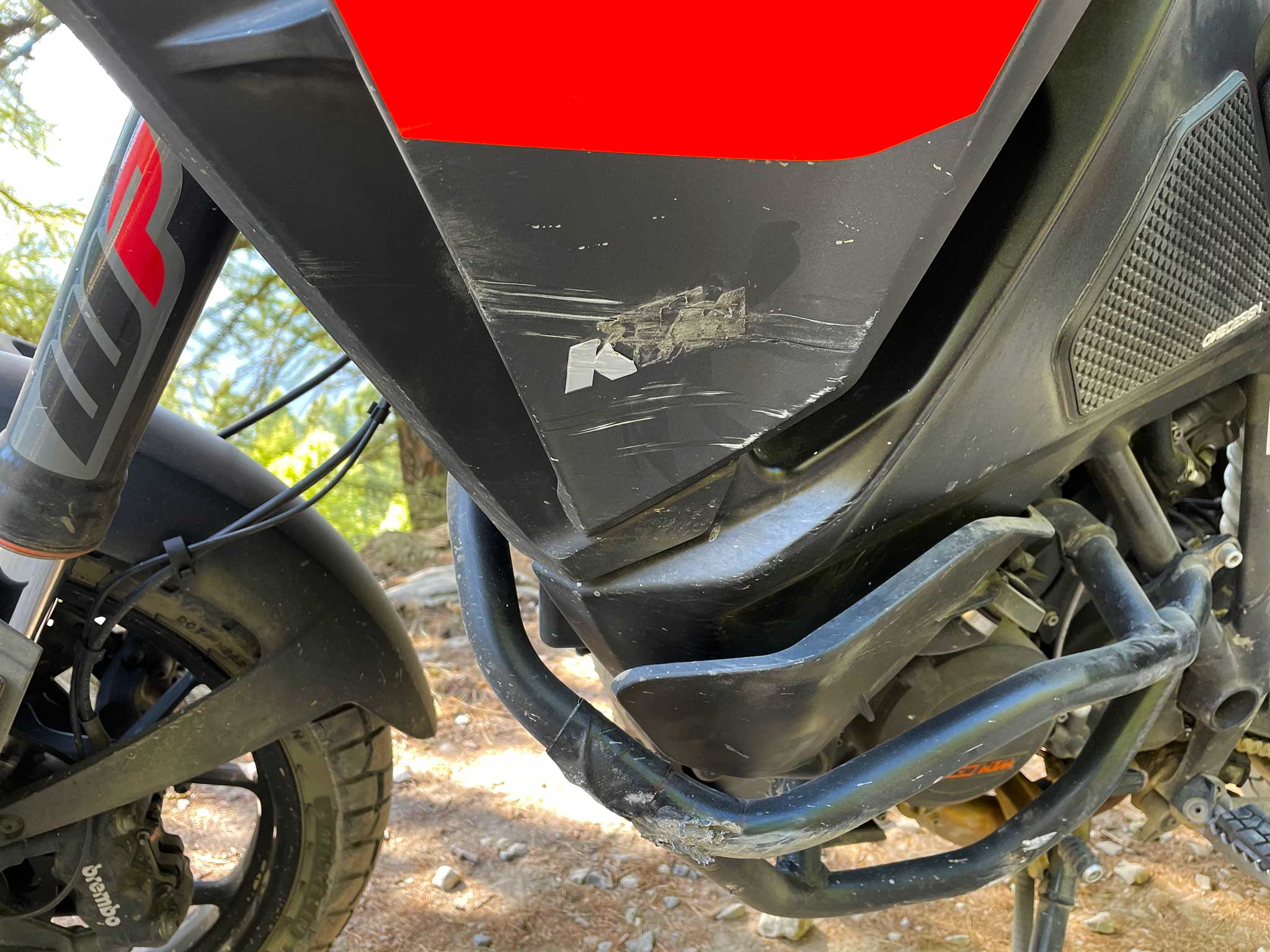 Cosmetic damages only, thankfully. Upper crashbars might have helped.

Luckily, the locking system for the pannier still worked. So I got it back on. Then managed to get the bike up, and carefully roll it down alongside the track.  Time to calm down.

I walked down the rest of the hill. Fortunately it wasn’t far. I’d done the hardest part. On the way back up I cleared the path and removed larger rocks. Planned how and where to ride. Not long after I made it down to civilization and was back on pavement.

Riding offroad, especially on a large adventure bike fully loaded with luggage, commands caution. What took me by surprise was the rear brake. When you ride offroad the rear brake isn’t helpful vs stopping. But while the stopping power is nil or close, it can help you steer, or even slide to maintain balance.

When the going, or riding  gets tough, size and weight plus tires could make a big difference. I think the KTM 1290 Super Adventure S works surprisingly well offroad. But cast aluminium wheels does mean you have to be careful in rocky sections. Else, on gravel and dirt, not at all a problem. 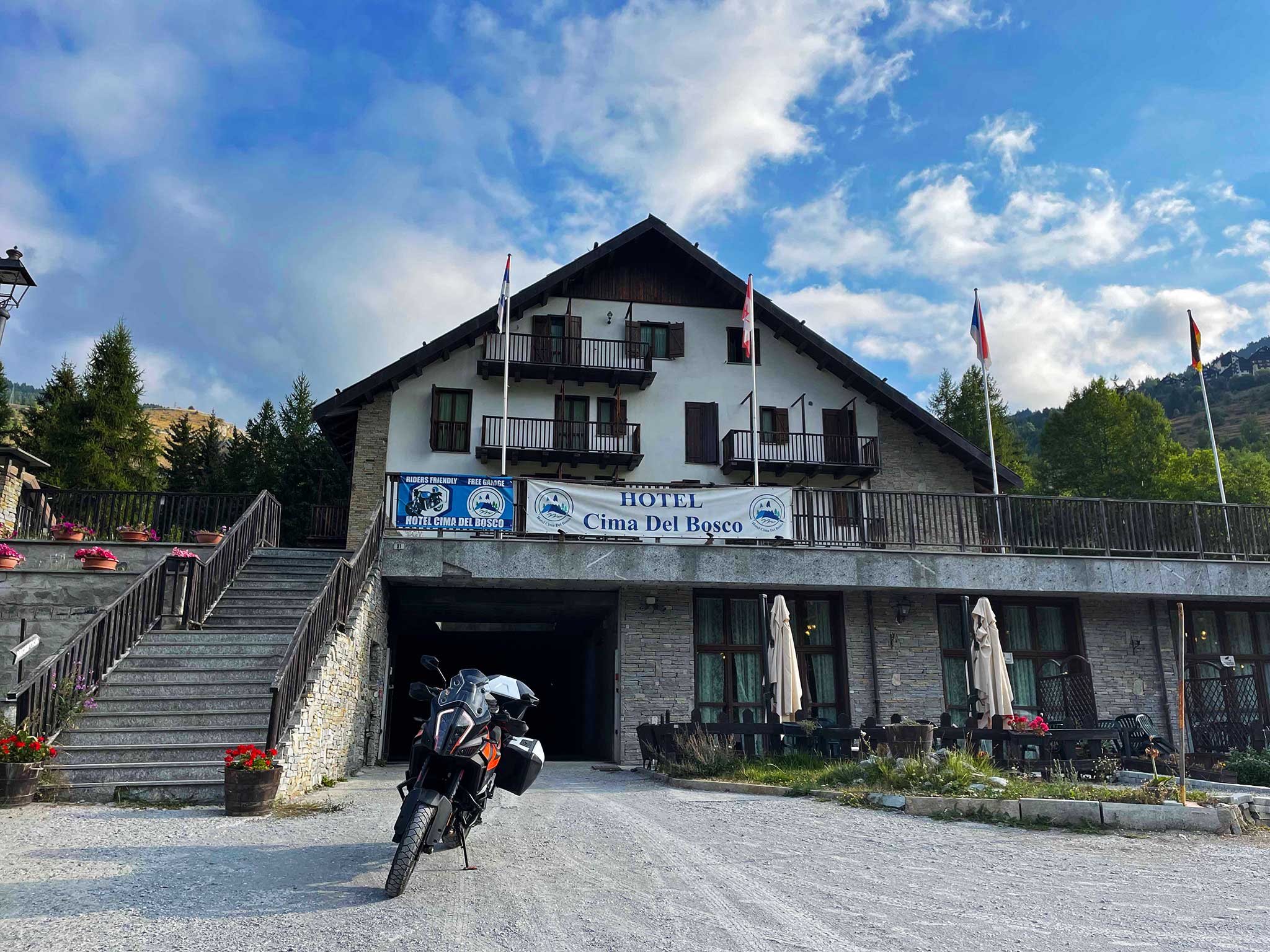 Anyhow, it was early evening when I made it to the hotel. Moments later I sat outside with a cold pint talking to some other bikers. It had been an exciting day to say the very least!

Made the decision to stay a couple nights. The next day I would ride back into France and Col de l’Iseran. Back soon with more. Below, the “mishap section”. 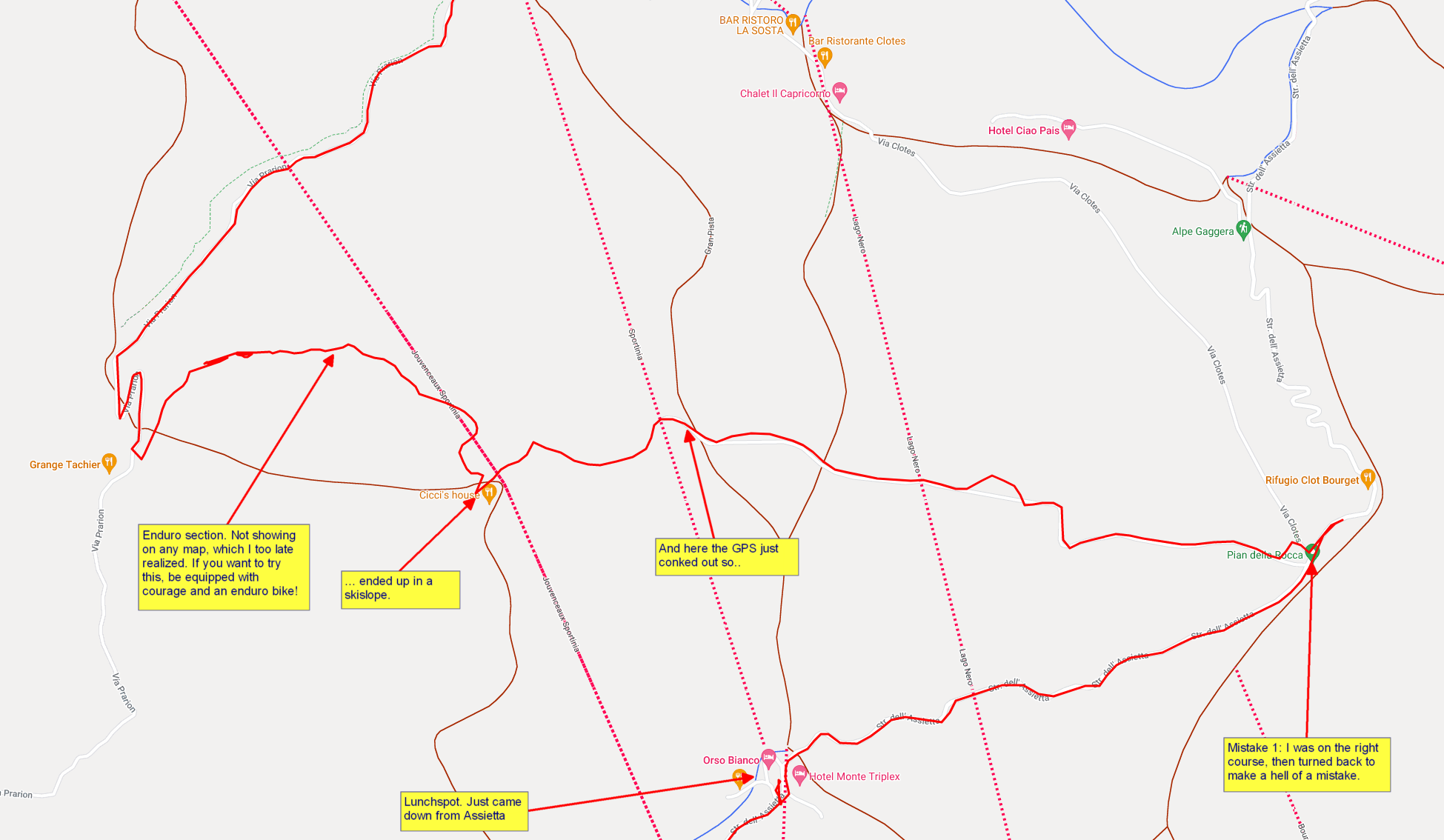 Well at least I know where NOT to ride, next time!