Since returning to riding May 2015 I’ve owned six motorcycles. Two are currently in my possession, for how long remains to be seen. 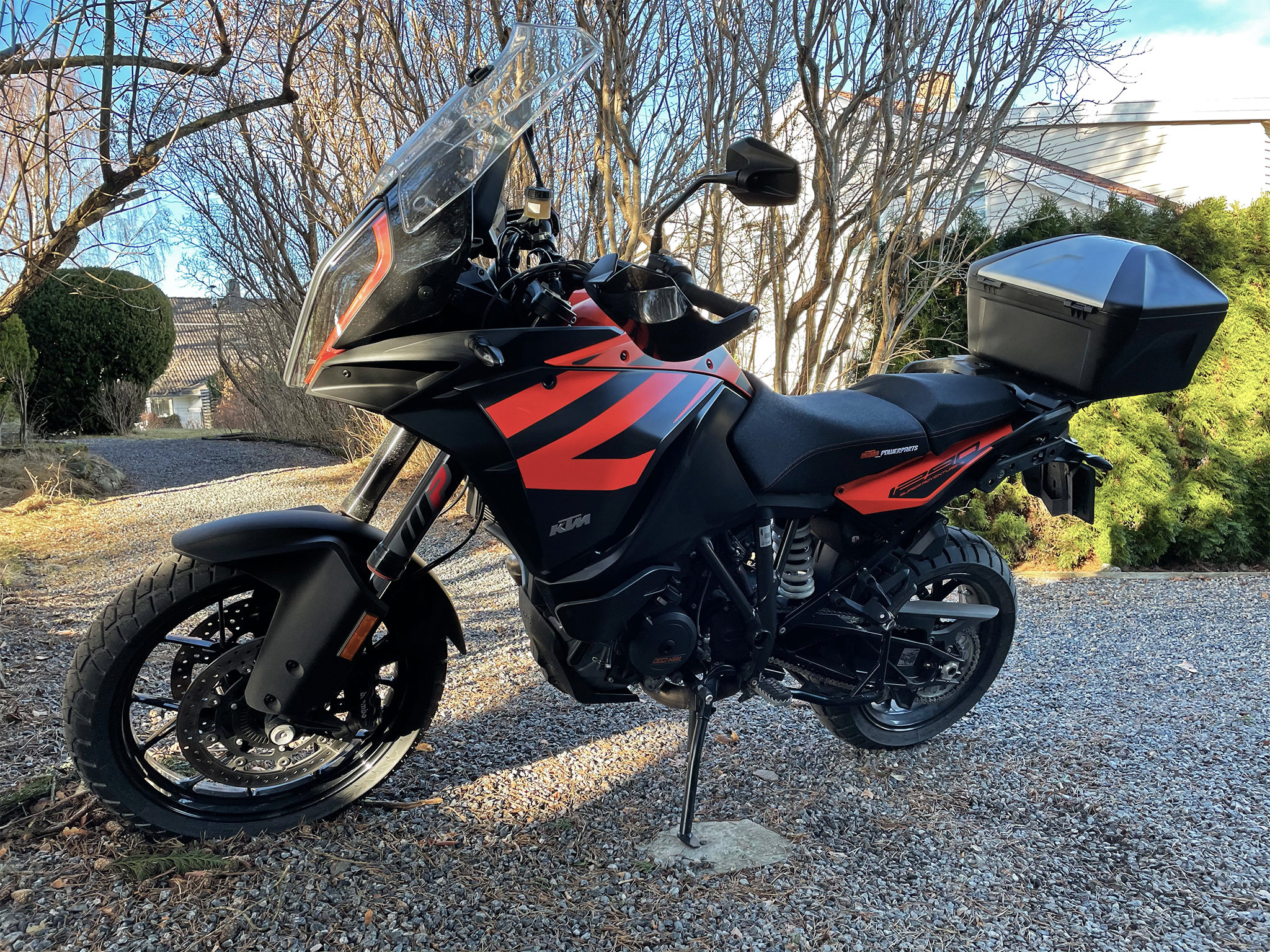 Another of those things not planned. During fall I’d been looking for a replacement for the BMW R1200GSA, a write off after the accident.  Made the decision early on I would not buy anything new. Main reason being, want one successful season after “Annus Horibilis”. Before making that leap.

Saw, and rejected, several newer incarnations of my the R1200GSA. Then in December, a KTM1290 Super Adventure S popped up. I’ve never had a KTM in my life. This bike has gotten great reviews. Price was pretty good so, done deal!

After 3 beemers it was time to try something new. One only knows what one has experienced. Had read lots of good stuff about the Honda XL600V Transalp. A decent candidate showed up in the classifieds, it looked good and the price didn’t scare me. The day after I went to check it out. Came home with bike number 2 in the evening.

XL600 is the first of 3 versions, produced between 1987 – 1999. Some claim it’s the best of them all. A motorcycle that works, whether on local gravel and forest roads, on longer journeys. This motorcycle is surprisingly good on gravel and dirt. It is also very good on the road. A lot friskier than the first Honda, although the engine is fairly similar (both V-Twins).

If you’re considering some cheap fun, a motorcycle that can be used for almost anything, commuting, or longer expeditions, Honda Transalp XL600v is an excellent choice. Saw an ad in the online classifieds on a Sunday afternoon. It was almost brand new. The previous owner had taken it back to the dealer after 1500 kilometers. It was too tall for him. Monday morning I was on the phone. Monday past lunch it was a done deal. I could not let this motorcycle go.

The GS Adventure is a phenomenal bike. Does everything I need a bike to do, and then some. A Swiss Army Knife on two wheels, no more, no less. Mid-June 2020 I regrettably had a serious accident.  The bike was written off in the fall. Too costly to repair. I received a settlement equal to the price of a similar bike.

Up til the point of the accident I’d done >55.000 enjoyable kilometers with it. Early September 2020 the insurance company decided it was a write-off. I got a decent compensation and that was the end of my ownership. One Saturday morning I checked the national classifieds. There it was, very well kept, with low mileage and useful extras. I rode 2 hours up to a BMW dealer that morning, returning home with a new motorcycle late afternoon. Mid-July I rode it down to Europe. That “story” begins here.

If you want a reliable touring motorcycle, one that can handle sharp curves, or hairpins, the oil cooled RT is one to consider. A motorcycle that even can handle a bit of gravel if you end up on such roads.

The 2006-2012 GS/RT models do have an Achilles heel. One it is good to be aware of. In my case the issue was exposed after riding on the Autobahn in high speed over some time. So you need to ride hard to provoke it to happen. 2012 or newer should not have this issue.

Autumn 2016 I did more gravel riding. Realized the RT would not quite cover my needs. Research for the next, potential candidates was started. Why and how did I end up with (the first) “beemer”? Well I always liked the boxer engine motorcycles. Rode one in 1978 for the first time. Wanted to try one again and was sold, immediately. They are very relaxed to ride, exceptionally comfy, have power in plenty (for me), and low RPM torque.

That switch happened on a whim. I had read myself up on which of the R1150RTs to buy. Twin-spark version is the one to have. This means 2003 or, in the US, 2004 models. The gearbox on this motorcycle is quite “agricultural”, makes clunky noises.

If you are looking for a relatively cheap solution, the R1150RT is solid alternative.

The R1150RT stayed with me through fall, and parts of spring the next year. As plans for a Euro-trip evolved into something more serious, decided I wanted something newer. Honestly don’t think it would have been any problem. 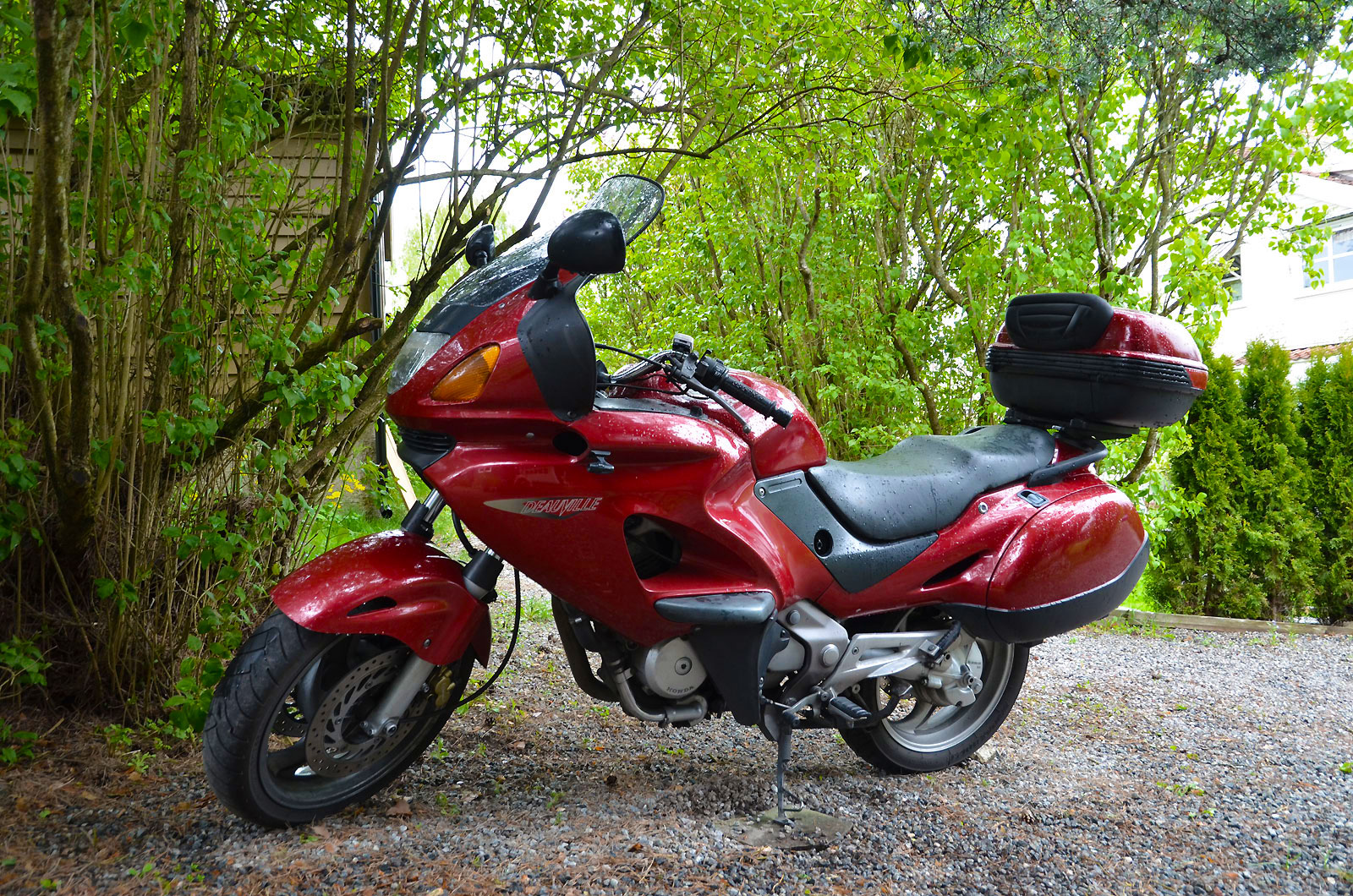 My first motorcycle in 32+ years. I wanted to (re)start with something modest. After a bit of research I landed on the “Dullsville”. Nicknamed by a journalist who considered it dull, boring, or as interesting as a glass of water.

I quickly came to the conclusion that the journalist was right. Additionally, being a tall guy and the Deauville is somewhat small, it was difficult to find a good sitting position. Not one for the long hauls although I did some pretty long day tours with it.

Old Honda motorcycles are seldom a catastrophe, even if you buy one with high mileage like i did. The engine on the Deauville is rock solid. The bike is a medium sized, affordable, reliable machine, one more for local or national touring. Somewhat limited in power, a one person’s motorcycle, at least if you pack it up to go touring.

After 5-6000 kilometers I was ready for something bigger, and more powerful.