Motorcycle accessories are for many, or most riders, both a necessity and a must. Seldom a bike comes with all you need/want, new or old.

Like many people I’ve been through this before.  More than once. You buy a new bike, then begin to search for (all the) extras . The extras you need, the extras you (maybe) don’t need. And the extras you think you need.

Winter is an excellent time for such, research and shopping. So I warmed up with (some) smaller stuff. That list have since time of the below image grown “a bit”.

Motorcycle accessories for the new bike 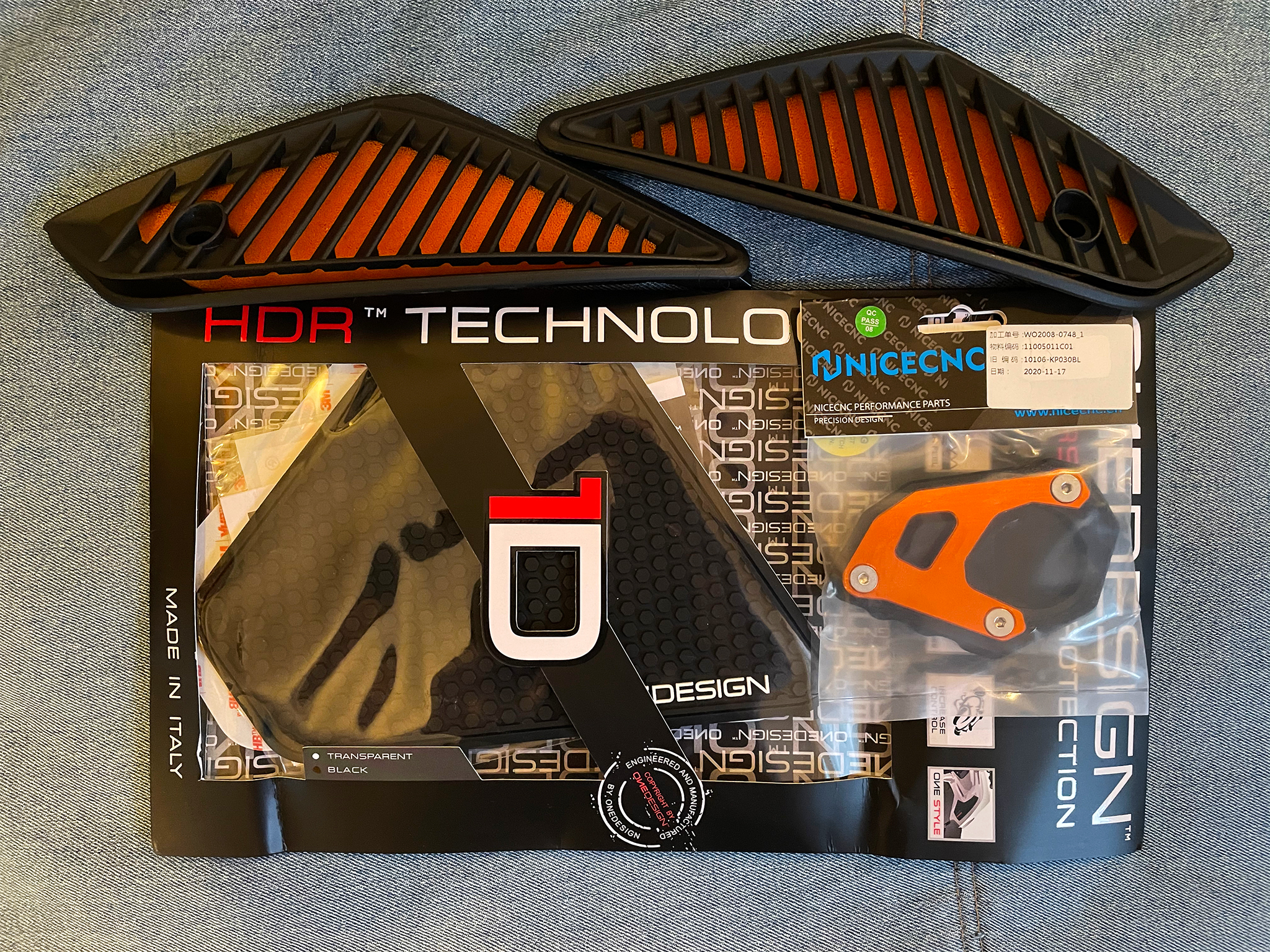 Already when buying the new steed I knew there were several things I had to get. Things I had to change. Not very different, yet different, from last time. Different bikes needs, or requires, different extras or modifications.

The first thing I noticed on the KTM 1290 Super Adventure was that the stock seat felt like a slab of concrete. Now, a motorcycle seat should not be too soft, but something in-between hard and plush. You need stability.

KTM (the manufacturer) has a collection, or plethora, of motorcycle accessories. They call it “Power parts“. Funny name, the first power aspect that comes to mind, when looking at the (almost) infinite list of stuff, is the power to drain your cash.

Anyways, since the KTM Ergo (comfort) seat had gotten good reviews, and comes with seat heating that connects to the motorcycle computer, I ordered it. Heated seat I’ve had before on a BMW R1200RT. More than a nice to have in cold weather.

A good windscreen can make a world of difference to the riding experience. The KTM 1290 stock screen looked a bit rubbish. Definitely too short. Or, the sort that likely would cause buffeting for taller riders like myself.  Several 1290 owners have confirmed this. I had similar issues with the BMW GS Adventure stock screen also.

4 years ago I bought a Puig Touring screen with spoiler. It was brilliant on my previous motorcycle.  One reason these stand out of the crowd, is the way air is funneled across the screen, towards the edges. The shape, tested in vind tunnels, helps a lot on stability, especially in windy conditions, and/or in higher speeds. The spoiler allows fine tuning or adjustment of airflow. 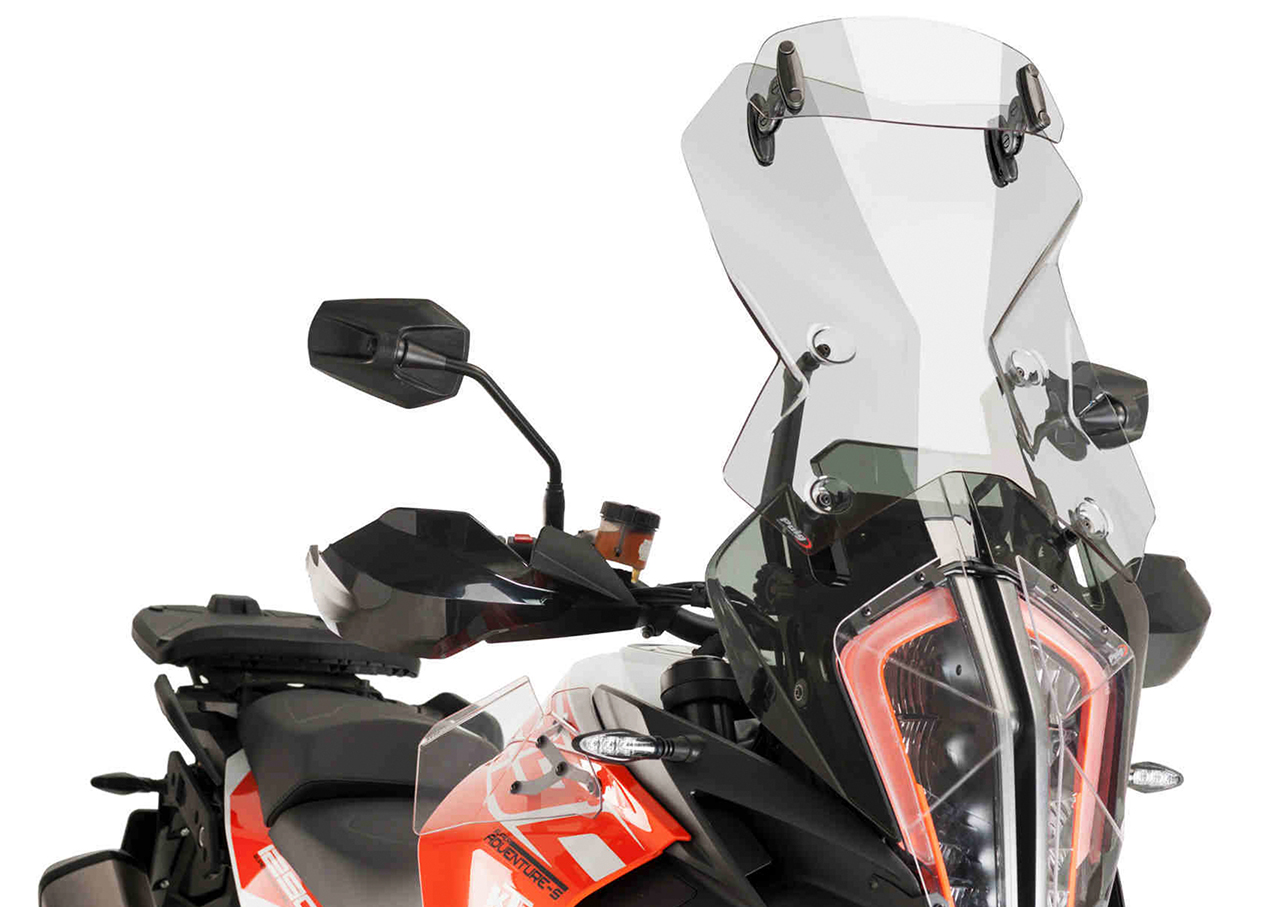 The Puig touring screen with spoiler, mounted on a 2018 KTM 1290SAS

So I made it simple, and bought the same, but suited for the 1290. One piece of advice; if you consider buying a new screen from your motorcycle, get one that is vind tunnel tested. And get one with spoiler. That extra can make a huge difference. Help to funnel air away from your head and helmet, or even channel air for cooling.

My KTM 1290 Super Adventure S model came without crash bars. It’s an optional extra when you order the S model. KTM’s own power parts crash bar is supposed to be good. But while being well made, it only covers the lower part of your motorcycle. Leaving tank and fairing exposed.

Been doing a bit of research. Asking around. The problem with “asking around”, is that you end up with a lot of opinions. But also good advices. However, peoples experiences are naturally as different as we are different. in the end, what’s bad for one guy might be both ideal and suitable for someone else.

I’ve narrowed it down to a few options but not yet made a definite decision. These are;

I’ll return to this topic in a separate post. Maybe even a few words about why the choice. Also need need to think about auxiliary lights, and mounting for these. Additionally decide about engine guard.

I will be riding gravel roads, but no major off-roading. Got a smaller bike more suited for such. But an engine guard (of metal) makes sense. The S version only has a plastic cover at the bottom-front of the engine. Adequate for on-road, inadequate for off-road riding.

Well that’s all for now. I’ll be back with more, later 🙂