Mieming was a nice landing spot. BioHotel Schweitzer seemed appealing from the outside. First encounter with hotel staff was however, a bit confusing. 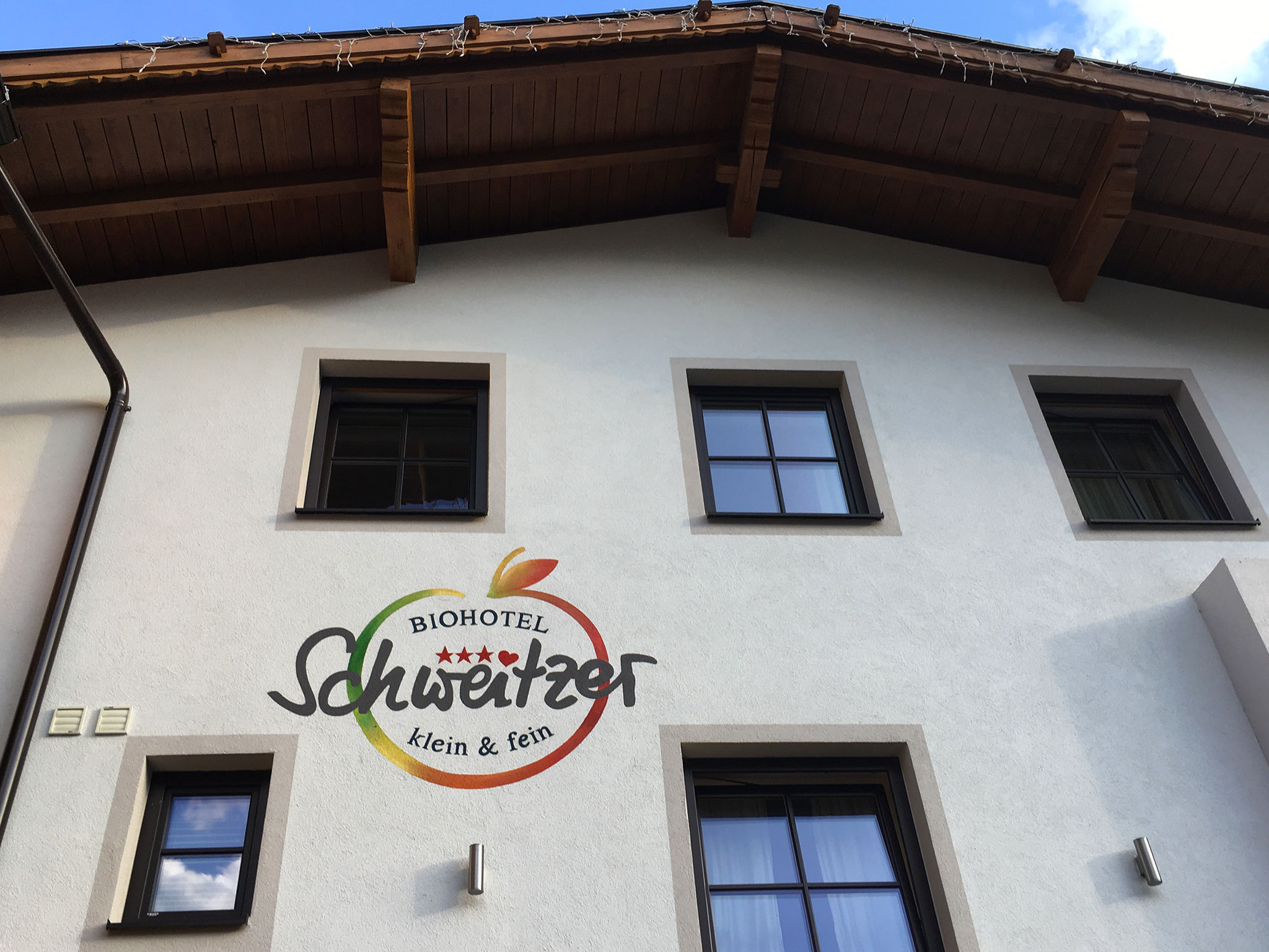 I’d booked the room shortly after arrival in Mieming. Done late booking earlier during the journey south, without any problems. So I did it again, booking.com indicated vacancies, the offer was price-wise appealing.

The person in charge the evening of my arrival didn’t speak much English, didn’t know much about computers and, seemingly,  much less about booking.com. They were in the middle of dinner preparations, she was stressed out and a bit overwhelmed.

After a few tries to find my booking she gave up, and asked me to write down information on a piece of paper for later registration. Handed me keys to a room, which turned out to be not only very nice, but huge, and much better than the online deal!

BioHotel, finally I got it

A bit daft but I probably would not have cared anyway. 11 hours or so riding is, or can be, slightly fatiguing. After a shower I headed to the hotel’s restaurant. Quickly realized why the “Bio” in the hotel’s name, they served only vegetarian food! 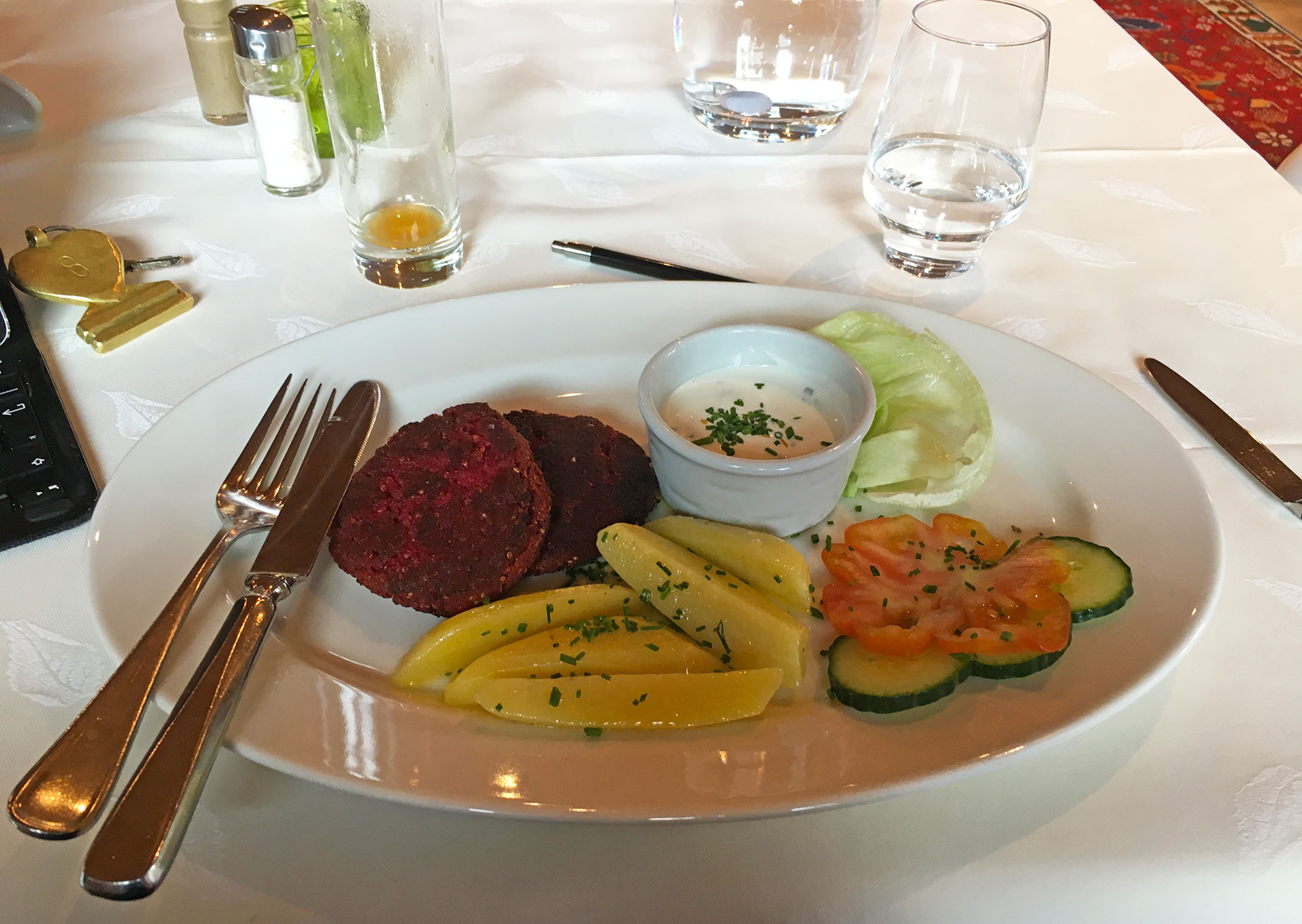 The ecological, vegetarian dinner was excellent, here one of the dishes

I’ve been a vegetarian for more than 12 years earlier in life, and don’t mind vegetarian food. The chef knew his stuff, all courses were like the the hotel, excellent.

Good to get a little break from the meaty stuff too, although a breakfast without bacon, hmmmmm.

Stay another day in Mieming The following morning, after a good night’s sleep I discovered that the hotel’s conception of “Bio” did not exclude meats for breakfast. They had both bacon, sausages and everything one could possibly desire.

After an excellent breakfast I decided to stay in Mieming one more night. The hotel has serene atmosphere, offers some excellent healthy food alternatives and a possibility for mountain walking or bike rentals nearby (there’s a place in OberMieming).

I can certainly recommend BioHotel Schweitzer any day.

Anyhow, while eating spent some time on Google maps. Jaufenpass and then Timmelsjoch seemed like a good day’s worth of riding. Weather forecast was excellent, and the total riding distance within the sensible.

So after breakfast I went from Meiming down east towards Innsbruck, then south. With the exception of a few miles on the highway to Innsbruck I stayed off and, as soon as possible, went up on the mountain sides on smaller roads. What you can experience along small-ways

A little further south I road alongside the BrennerAutobahn. So glad I chose not to try the freeway! July 2016 I rode into Italy across Timmelsjoch (post here), from north to south. The idea now was to ride the other way. It might sound strange to those who don’t fancy riding, or road adventures for that matter, but if you’ve not done both directions you’ve not really completed the task.

Continuing along road 182 I passed Brenner and into Italy and Sterzing (Vipiteno). This is where one takes off and begins the ascent up to Jaufenpass.

The weathergods remained in good mood, just scattered clouds that helped keeping an otherwise pretty high temperature down a notch or two. Weather can change quickly in the Alps, but on July first it didn’t. At Berggasthof Jaufenhaus, which sits approximately 5 kilometers from Jaufenpass I stopped for lunch. 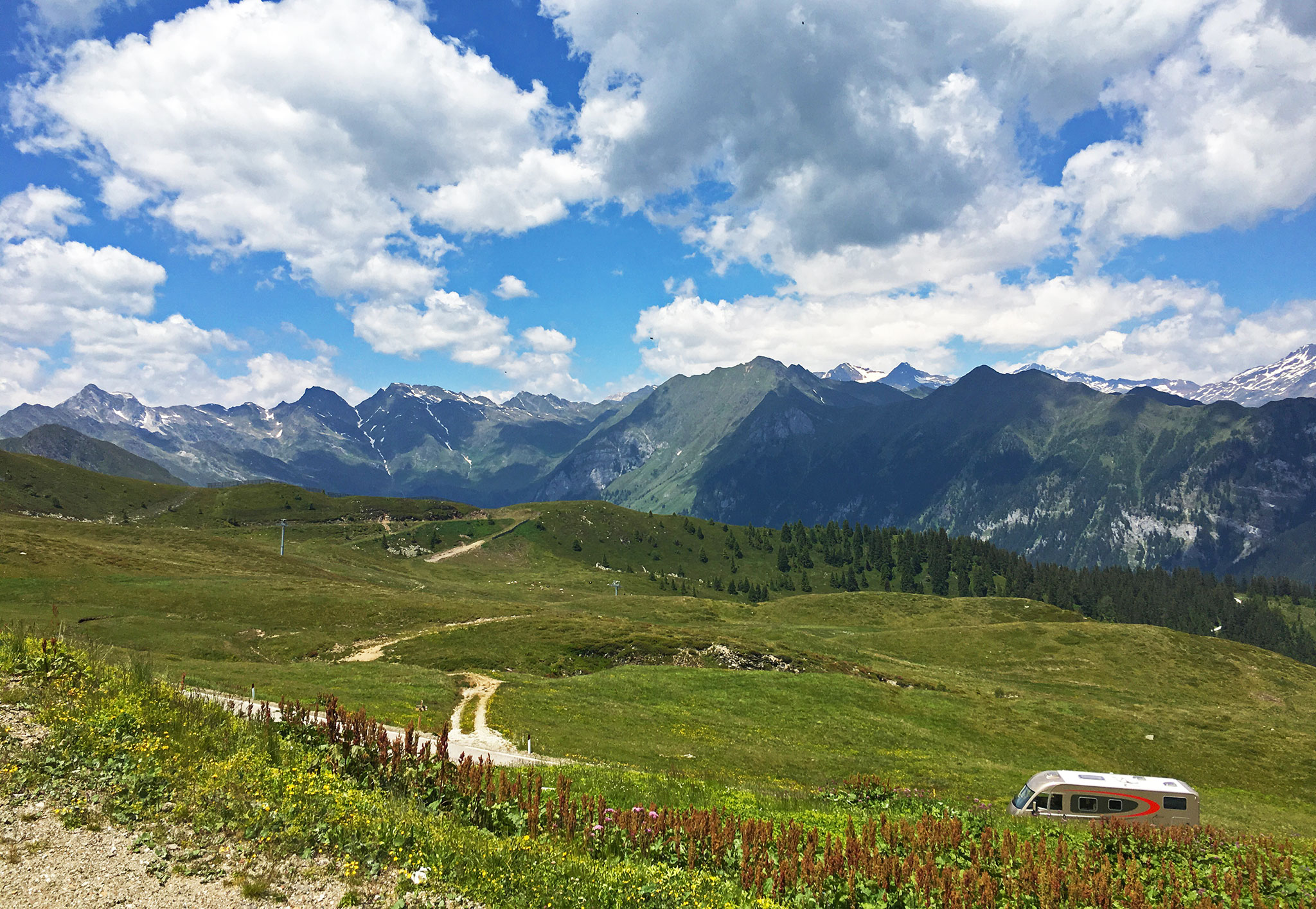 From the Jaufenpass I turned on my action camera and filmed a good stretch down on the other side. Not exactly a cinematic sequence par excellence, but  well.. you get the drift?

The clip is filmed with an Akaso EK7000 4k action cam. It’s a GoPro clone, made in “Chinesia” and cost a fraction of the original. It gets the job done, at least for me.

Not surprising there were lots of bikers riding across, and a few with something else… like old Vespas 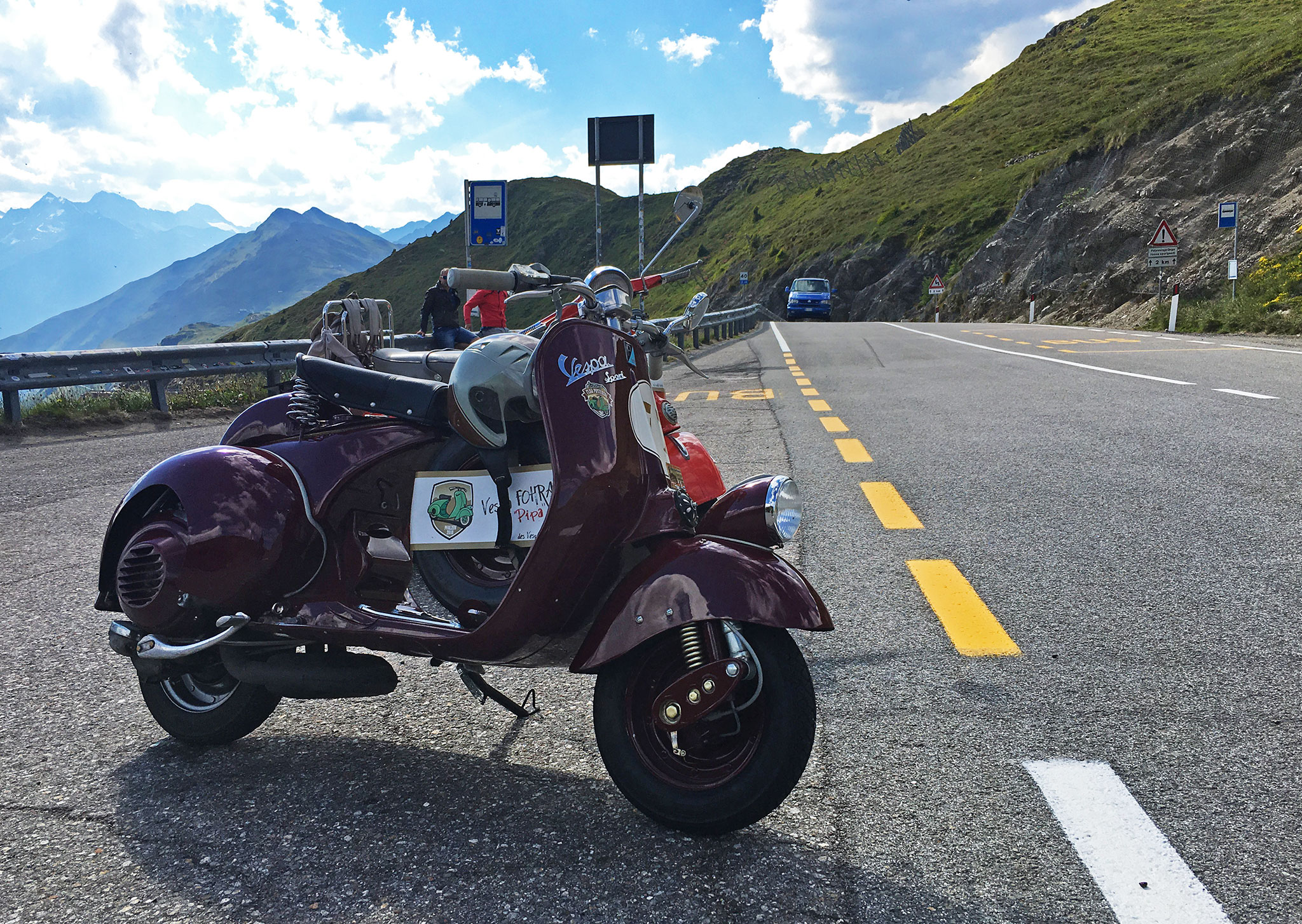 One thing that, sadly, is quite common to see, is dangerous and reckless riding. Overtaking cars under highly questionable conditions, not only putting themselves at risk, but others too.

Further down I was reminded how it might end. Total traffic jam, a wrecked motorcycle and car. Fortunately the rider seemed ok and was standing upright by an ambulance.

If you go here, do yourself the favour of thinking twice. It’s ok to take hairpins and curves in “active riding mode”, if conditions are right. Sense forces and master techniques. It’s something entirely different to ride foolishly, while completely ignoring fundamental rules of traffic safety.

One done, one to go

Arriving in San Leonardo in Passeier, to took off and followed Via Moso, or Strada Statale 44bis towards the next mountain pass, Timmelsjoch. 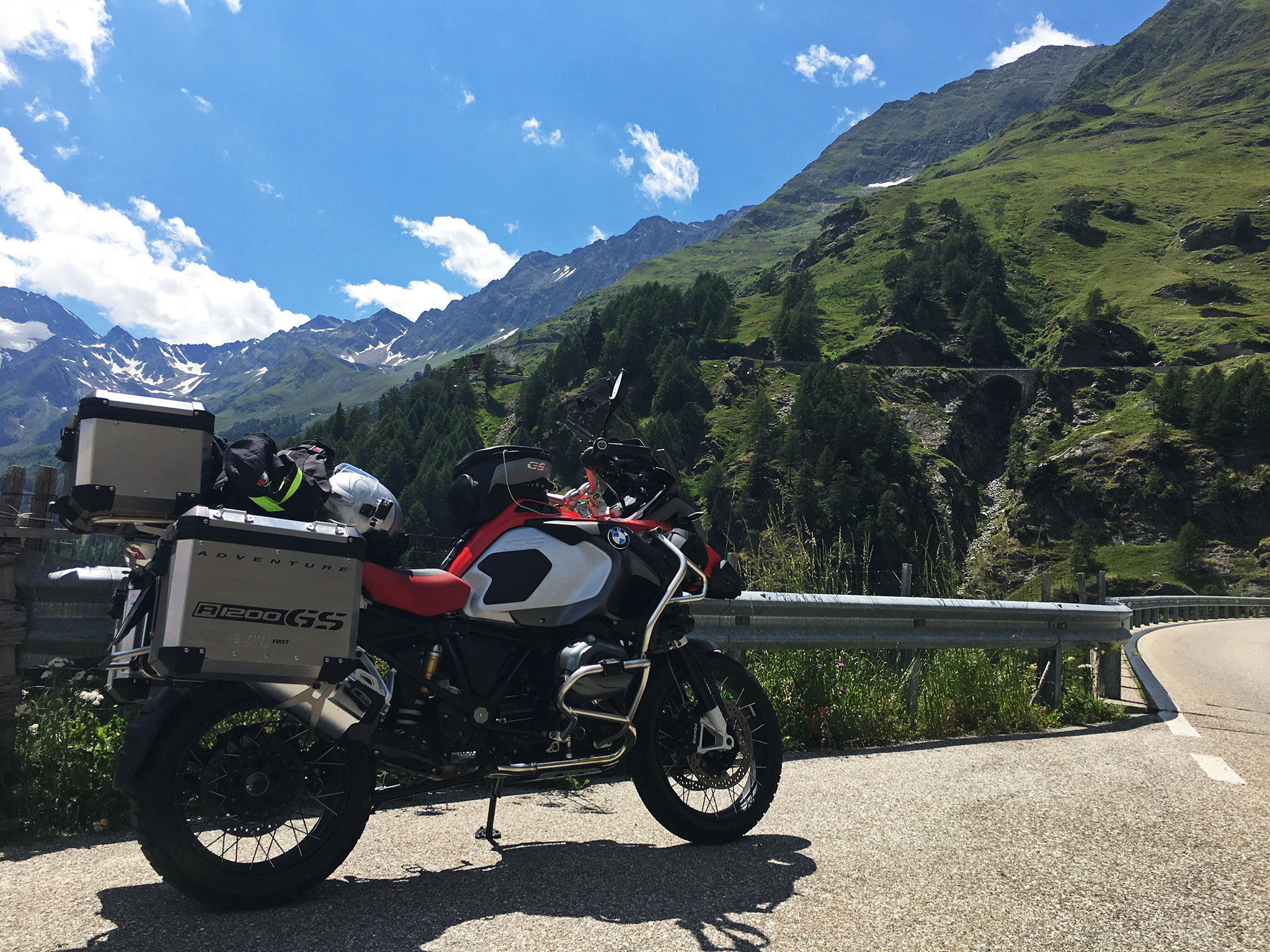 The road is great, and the scenery, well the picture sort of speaks for themselves? 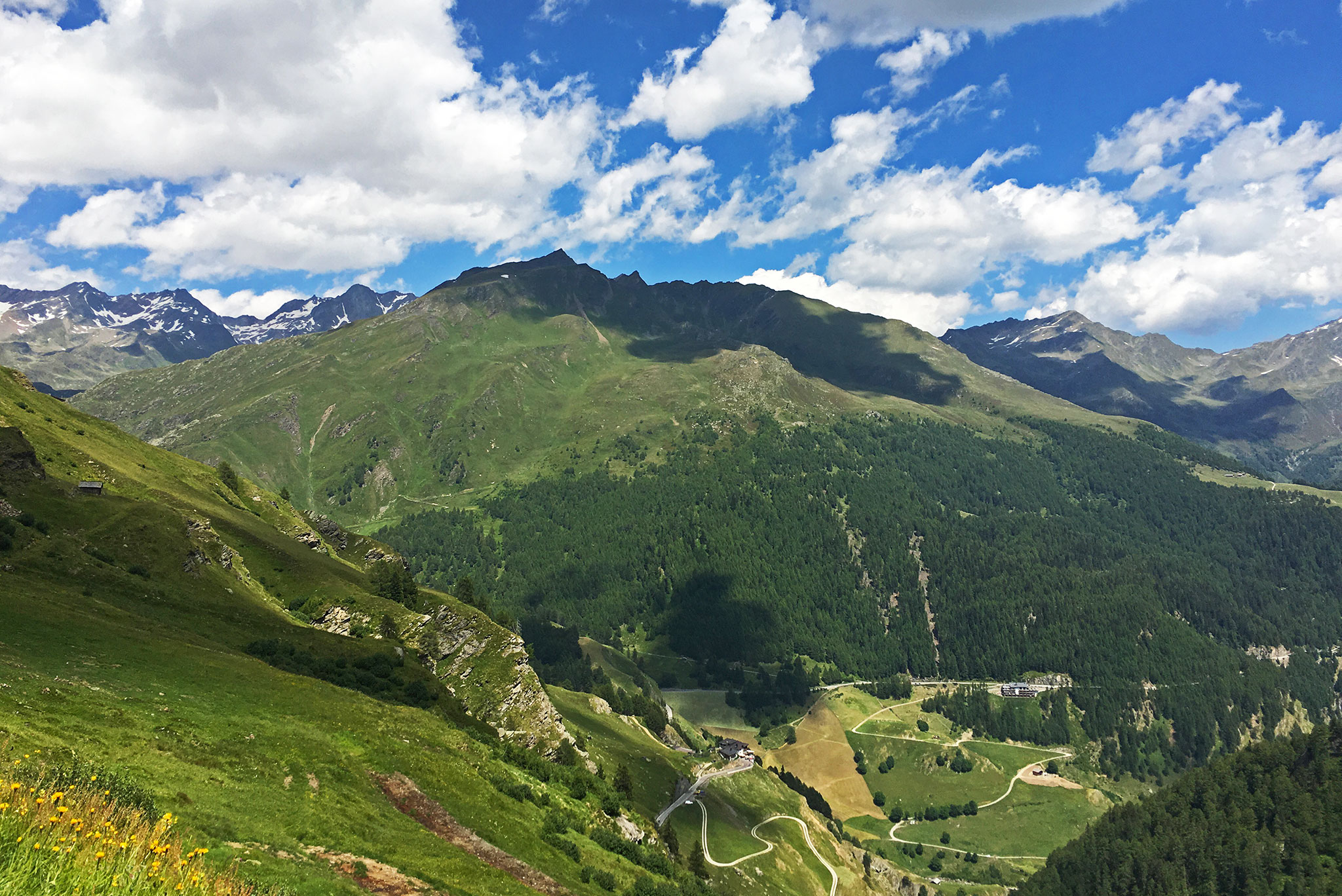 Valleys and mountains, deep down the road up

I continued up the curvy road, and umpteen hairpins, towards the top point of Timmelsjoch mountain pass. 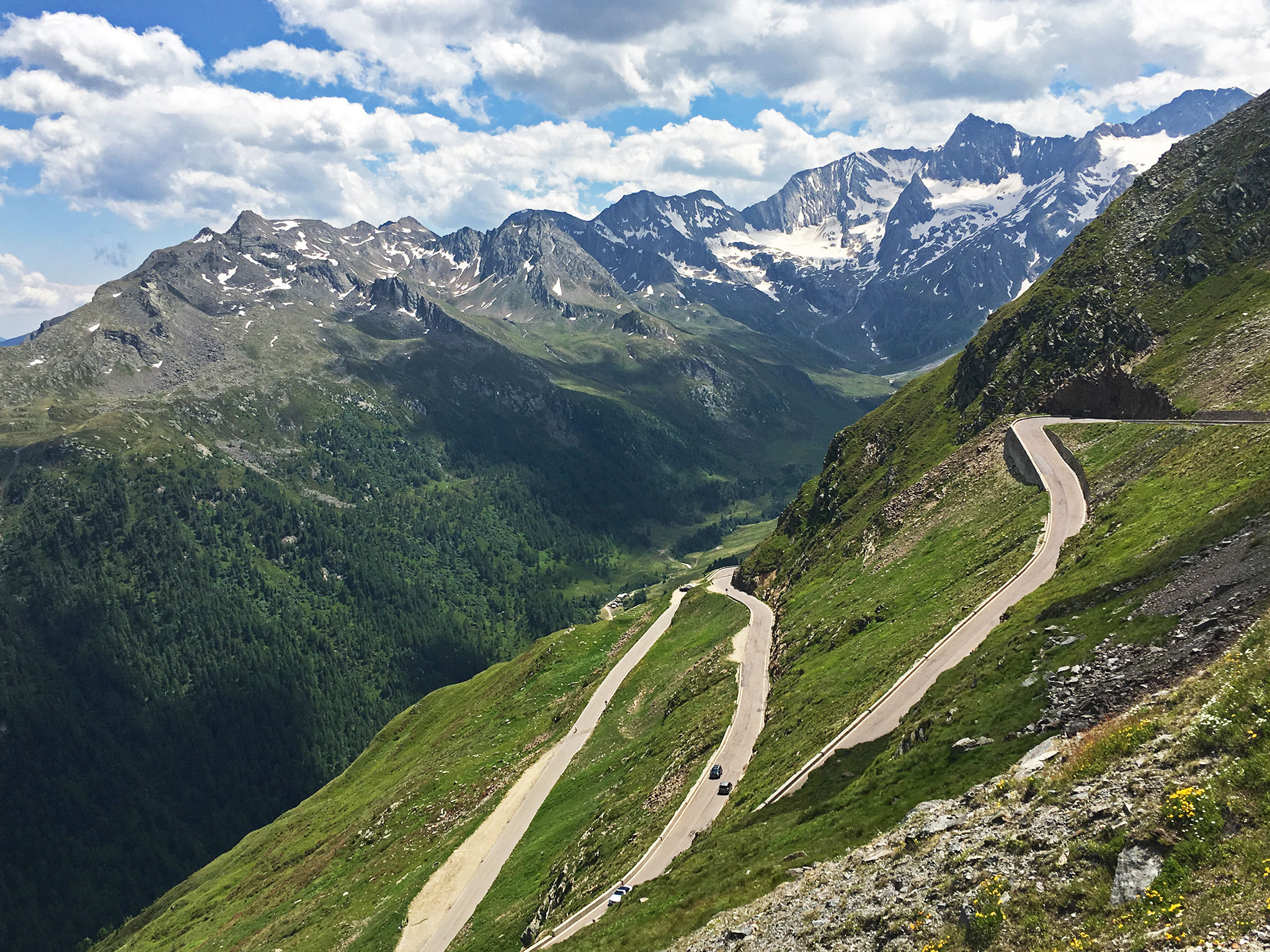 Along Timmelsjoch High Alpine roadhigh up on the Italian side

At the top, you head through the tunnel then down into Austria. The road is different here, not as steep, but with plenty of curves, awesome pavement. 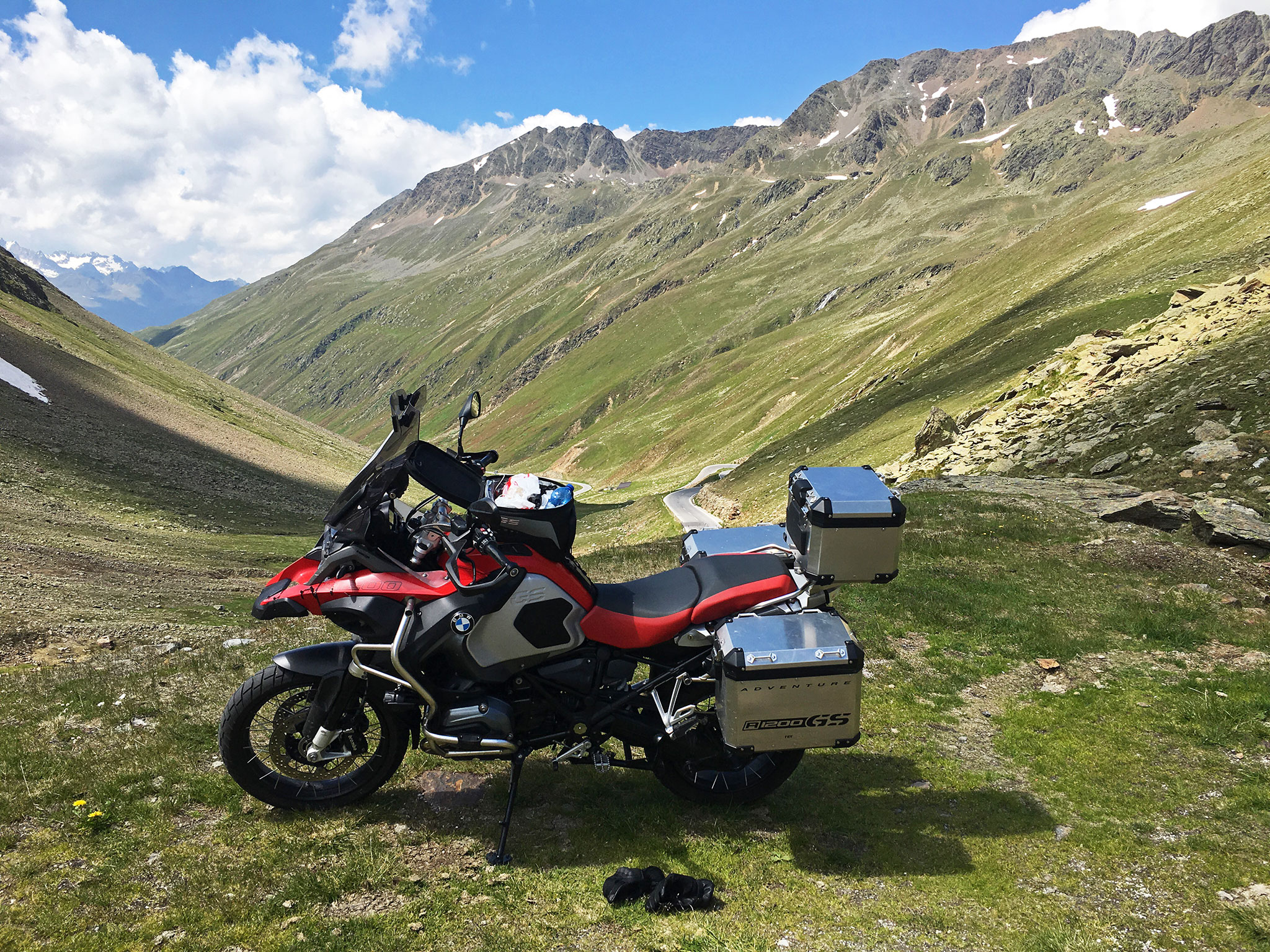 I continued down to and past tollgate at Hochgurgl where I stopped for a little break. Now the plan was (originally) to head further down and north along the 186 to Schlierenzau, then back to Mieming and the Bio-fantastic hotel.

DaCapo or, one more time!

The weather was still awesome, figured I had to seize the opportunity. So I made the (wise) decision to ride back the same way. Much longer a route than the originally planned but… it was a blast!

Coming down the other way I stopp to take a few shots, glad I did. 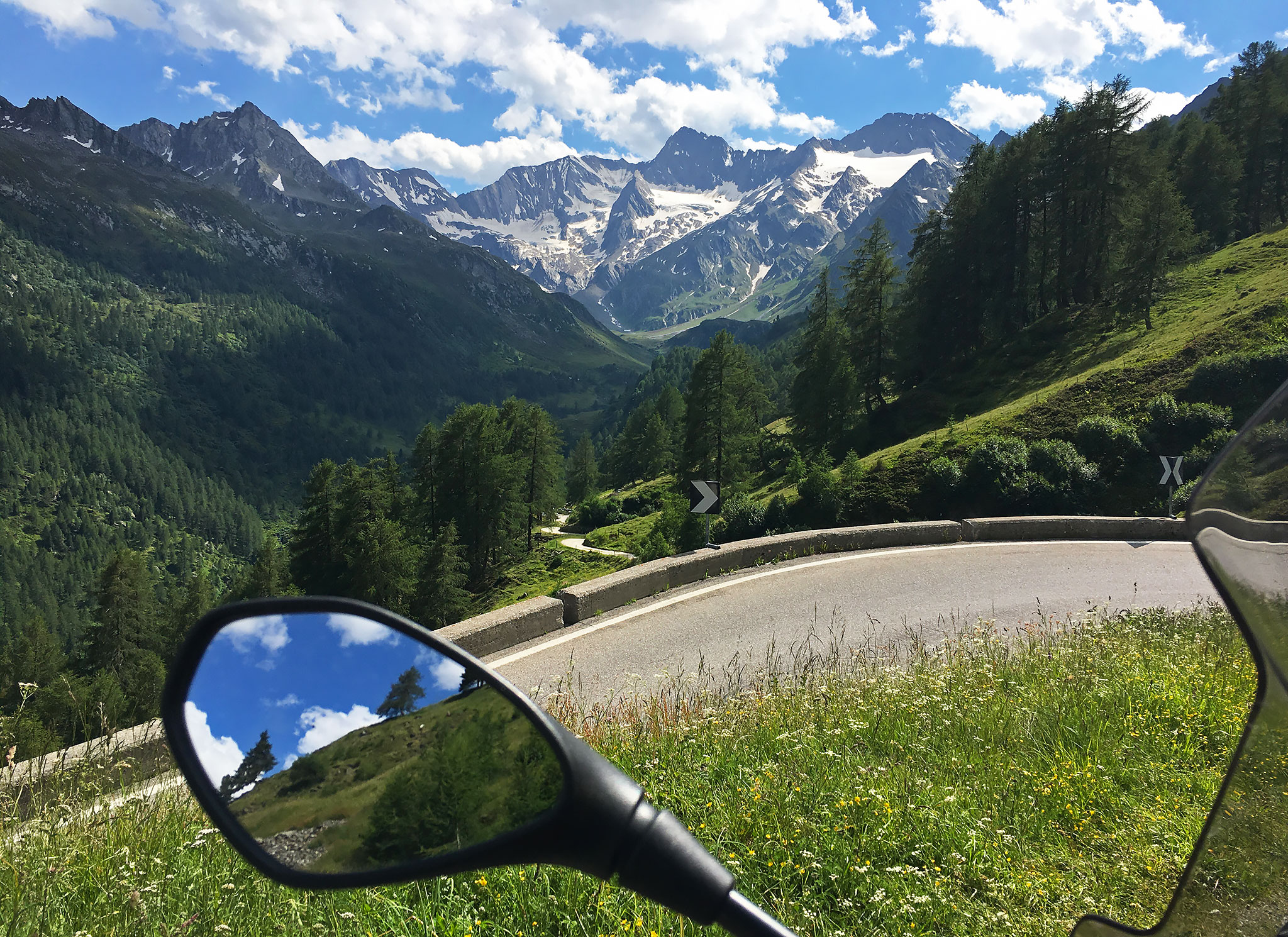 Back in Italy along Timmelsjoch high alpine road

Then continued down to San Leonardo in Passeier, took to the left and up towards Jaufenpass. Fun to have done both the passes twice on the same day. There’s always new things to learn when riding roads like these.

Made it back to Mieming and the hotel in time for a late’ish vegetarian dinner. Now I got to discover that they also had ecological beer! Despite high temps no one was dining out in the garden so I had that, all to myself. 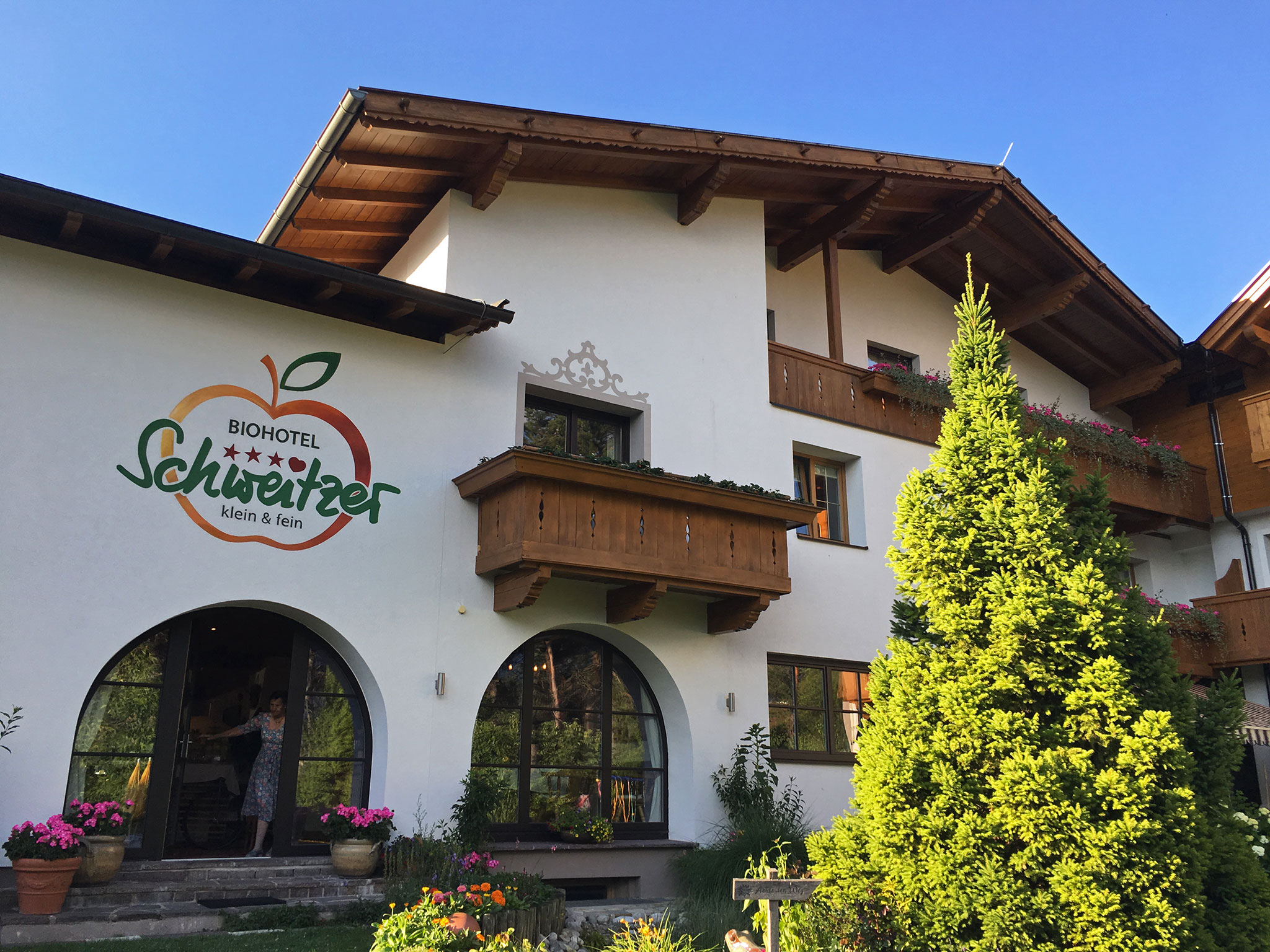 An eventful day was almost over. I had no plans for the next day. Where I went? You’ll have to stay in touch to find out!