Mid Wales, Elan Valley, South Wales and then Oxford. That was my “plan” for the day. Rough ideas would probably be a better fit.

But when it’s vacation, indulging oneself in whatever should be ok? Besides, when travelling during summer I normally eat 3 meals a day, and an English breakfast lasts me till a late lunch. 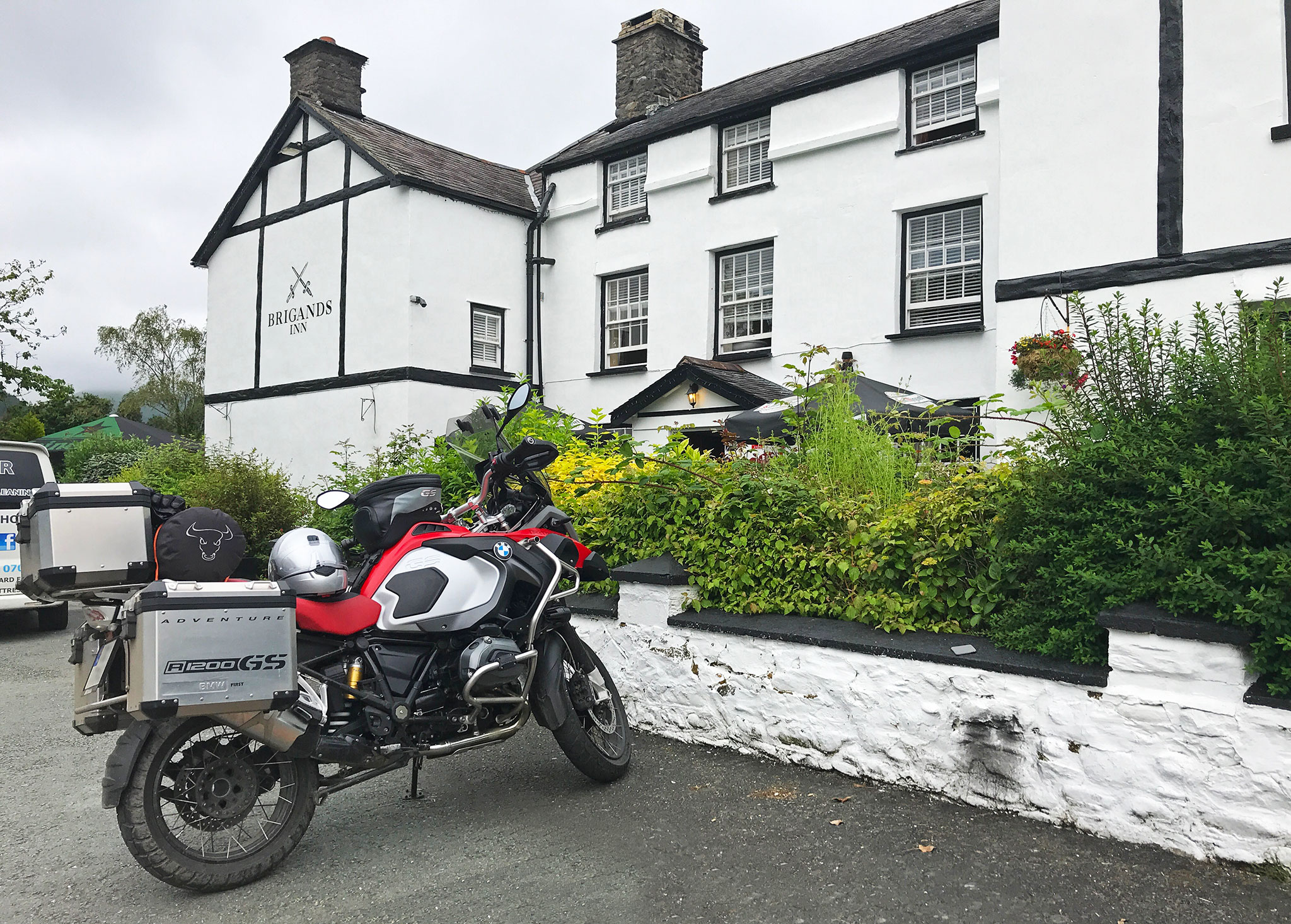 Packed and ready outside The Brigands Inn – Mallwyd, Wales

The weather hadn’t improved much from the day before, but at least the roads were, for the most part, dry.  It looked like I’d be spared from any heavy rain showers. But when in Wales, or England for that matter, one should be prepared for changes.

In fact, when you’re on a motorcycle it would serve you very well to be prepared for (abrupt) changes! 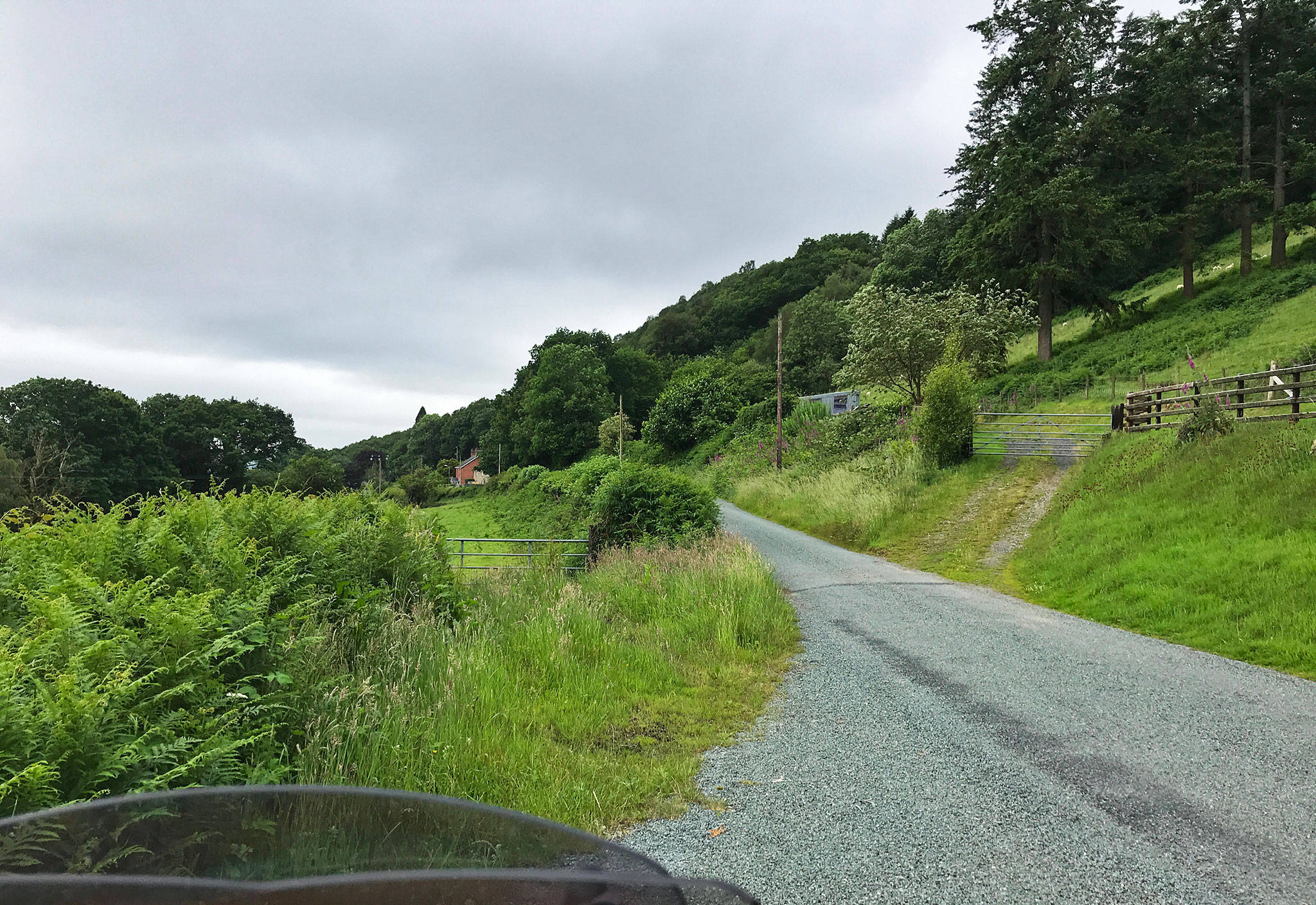 Up that hill on small roads into the woods

Optimistically I decided to begin the day with small roads only.  So from Mallwyd I rode in parallel to A470 south, then a little east, before south again in direction of Elan Valley.  I’d read and heard lots about the region, which is also called the “Welsh Lake District”.

Underway south I found plenty of small roads. Having left Snowdonia and Welsh mountains the landscape now consisted of lush rolling hills, patches of forests with farms and farmland . 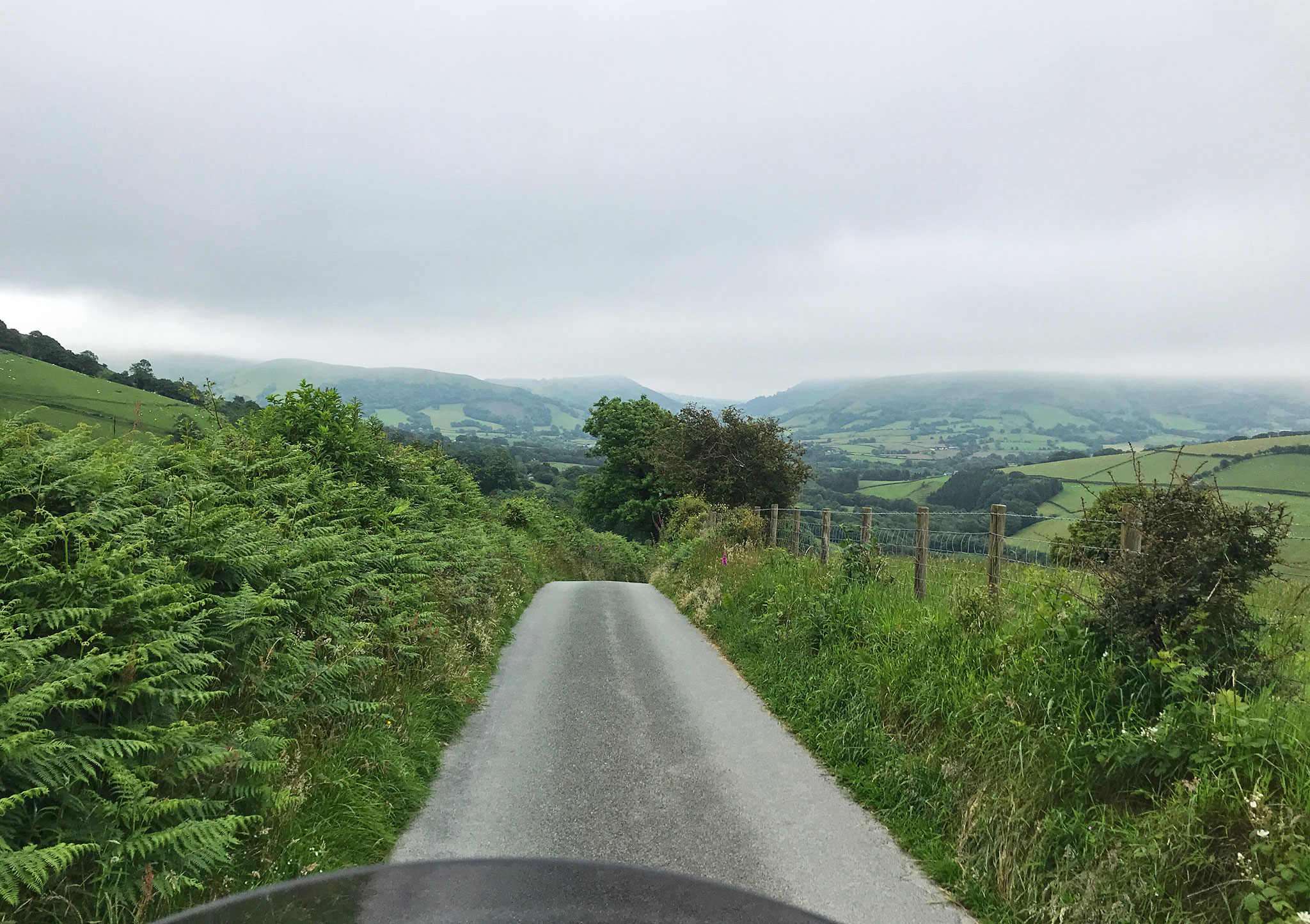 I quite enjoyed riding on the Welsh small roads. if you don’t have a GPS it might be more of a hit and miss. But the BMW Nav, actually a Garmin Nav, is pretty good at picking out routes.  So good I seldom see other motorcyclists when bimbling through the landscape.

Coming into Rhyader on the B4518 from St. Harmon I crossed over to another small road that led me southwest into the Elan Valley. 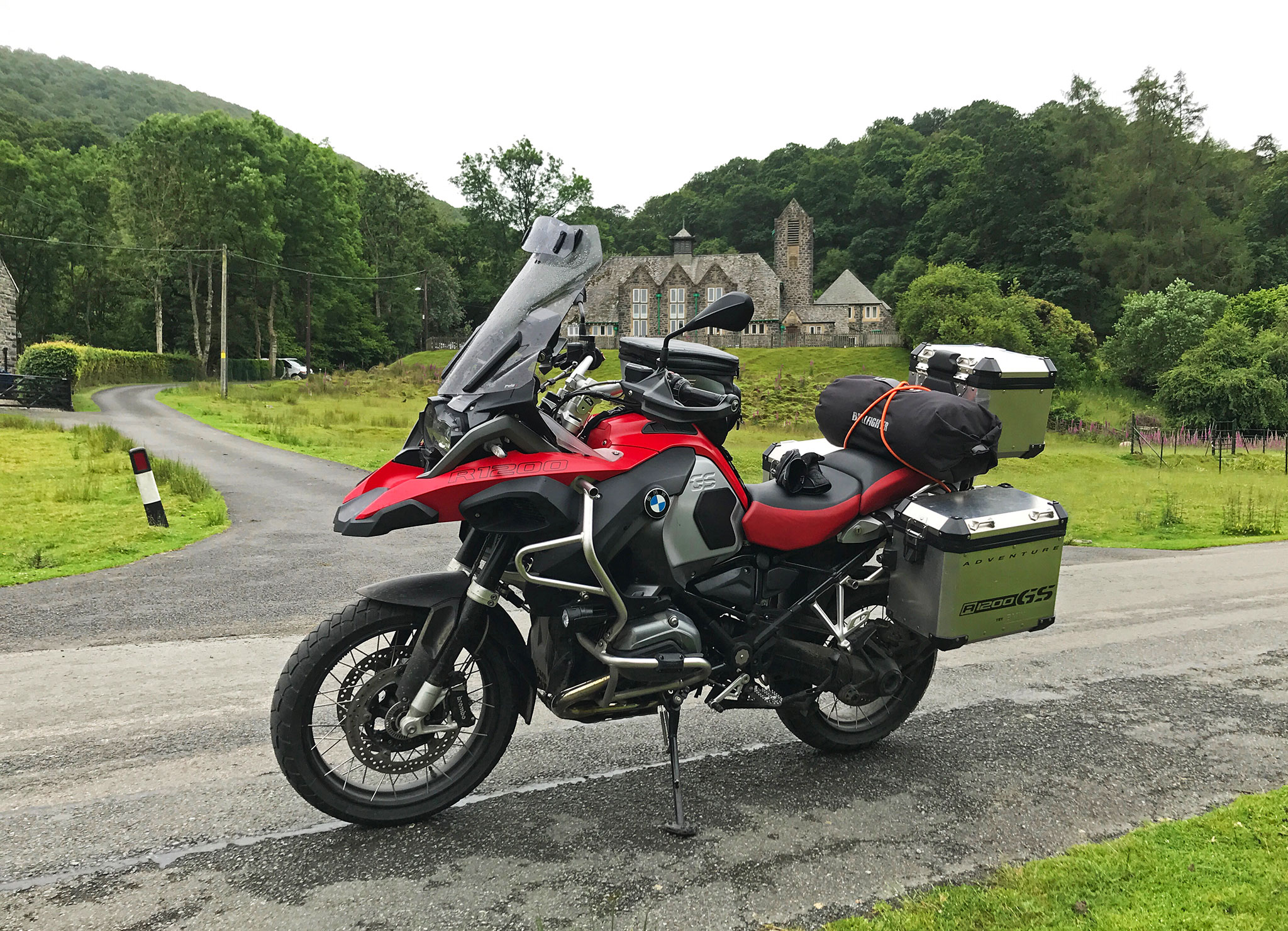 Soon I turned across a small iron bridge, and found myself in Elan Valley village, a small community with houses designed and built around the same of the Elan Valley Reservoirs (1892-1904). The village sits peacefully by the River Elan, interesting architecture and buildings. 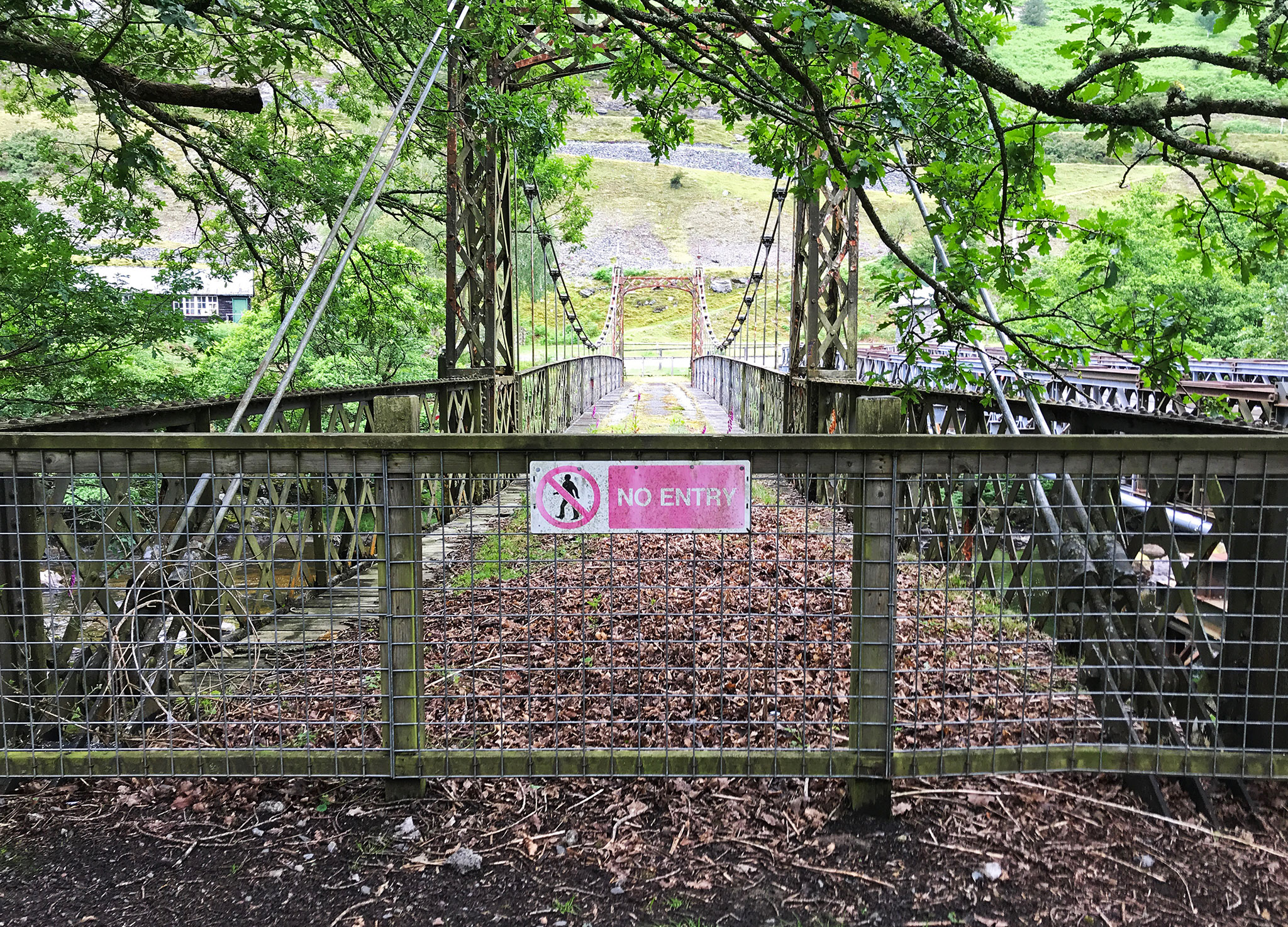 Old suspension bridge across River Elan, a new, less good looking next to it

The old iron bridge across the river had been replaced with a newer, uglier construction. Probably too costly to build something with the same finesse and design as the old one.

Had a simple lunch at the Elan Valley visitors center, then rode further into the valley to explore the reservoirs.

The reservoirs are a chain of five man-made lakes created from damming the Elan and Claerwen rivers within the Elan valley. Need for power due to industry in Birmingham being one reason for the rather massive project. The location and altitude of the valley made it ideal for reservoirs, due to altitude difference vs the city of Birmingham there were no need for pumping stations. 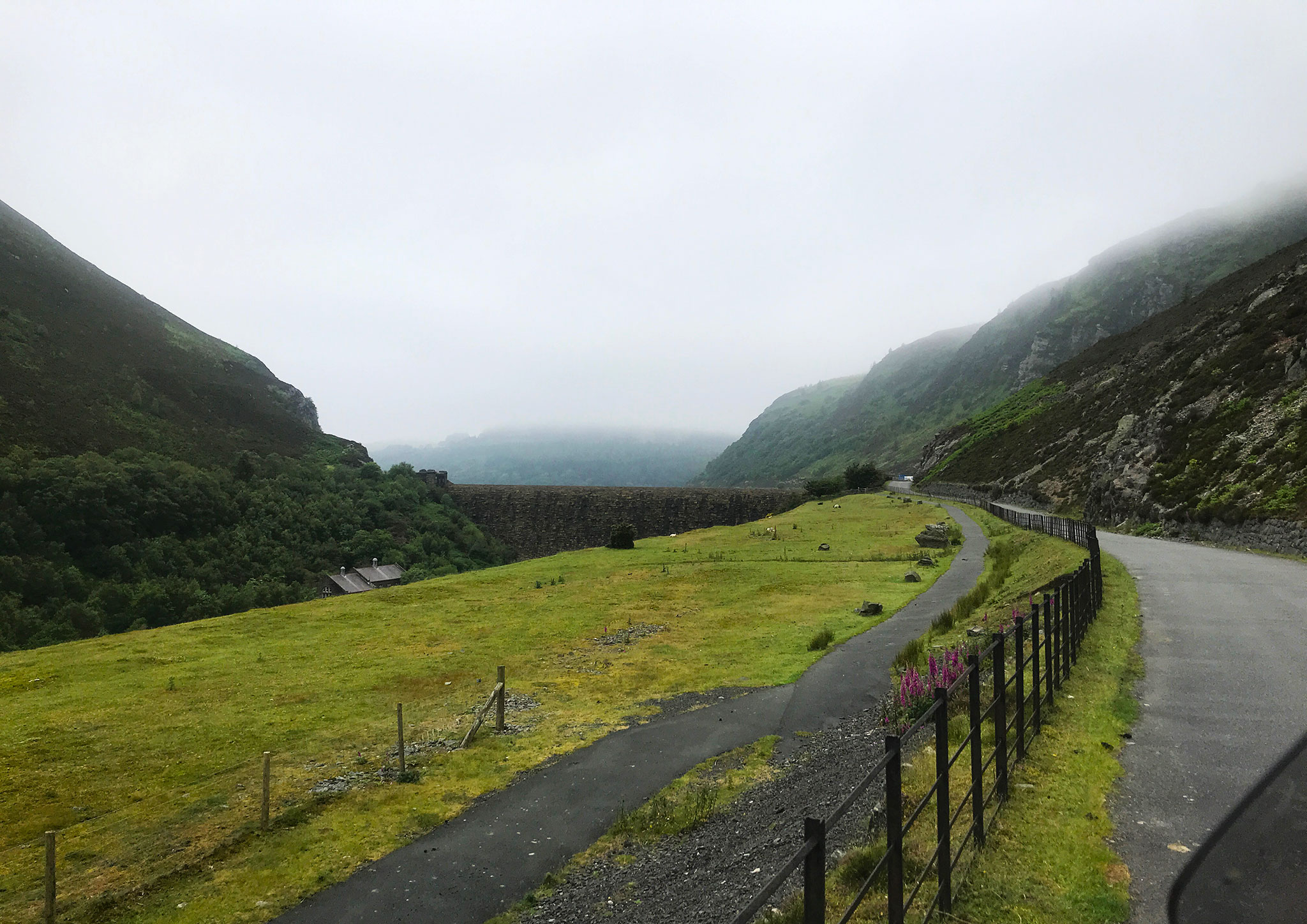 Caban-coch reservoir is the first one meets

For more details check out the Wiki page. The work was started in 1893, and the dams were built with local rock, on a rock bed impermeable to water. Combined with the narrow valley the location was ideal for reservoirs. 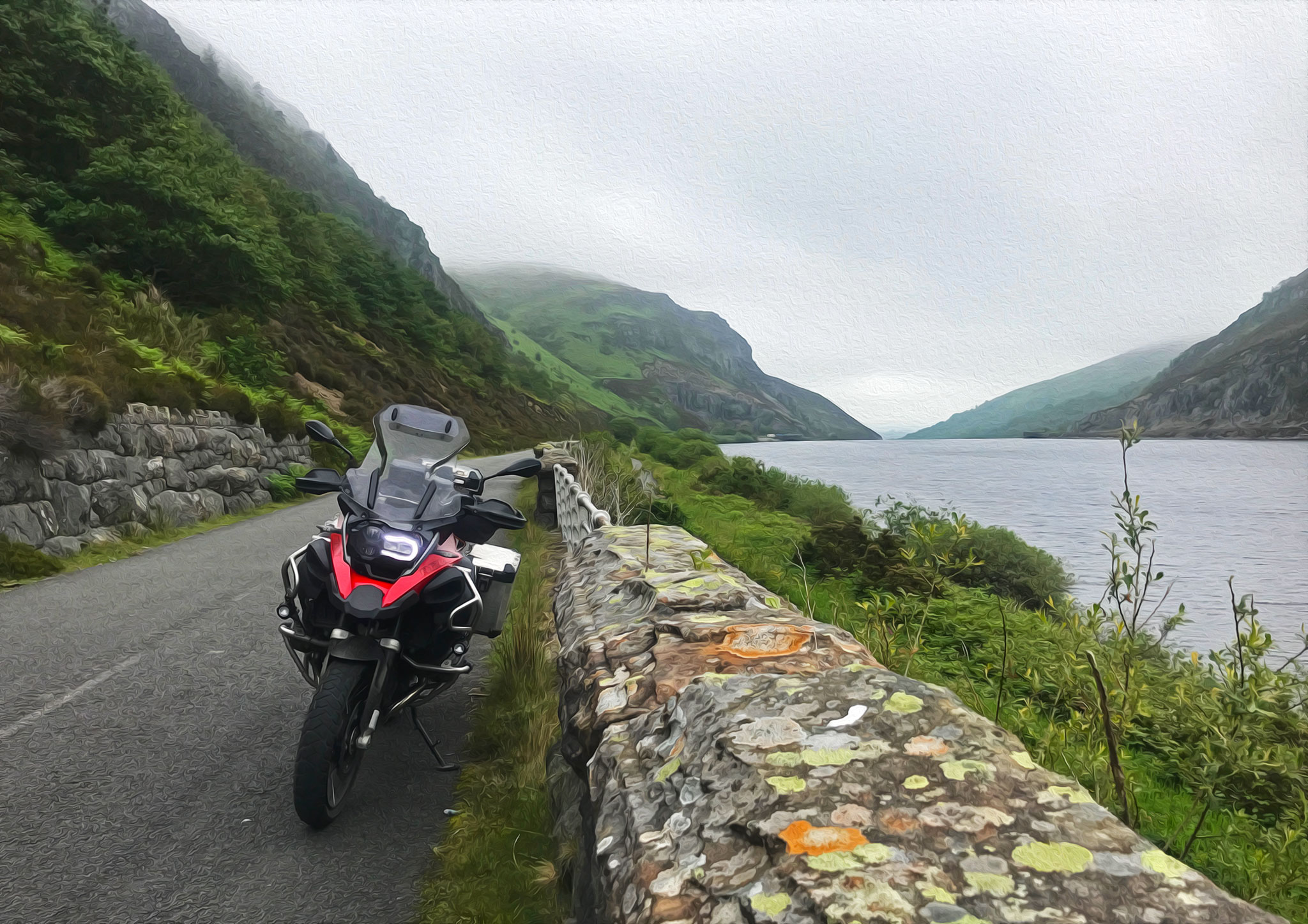 Considering time, or period, of construction I have to say it was a pretty impressive sight. Time had blended man made alterations into with nature, rocks had weathered. Because of this century long transformation the construction appeared set, almost a natural component of the landscape. 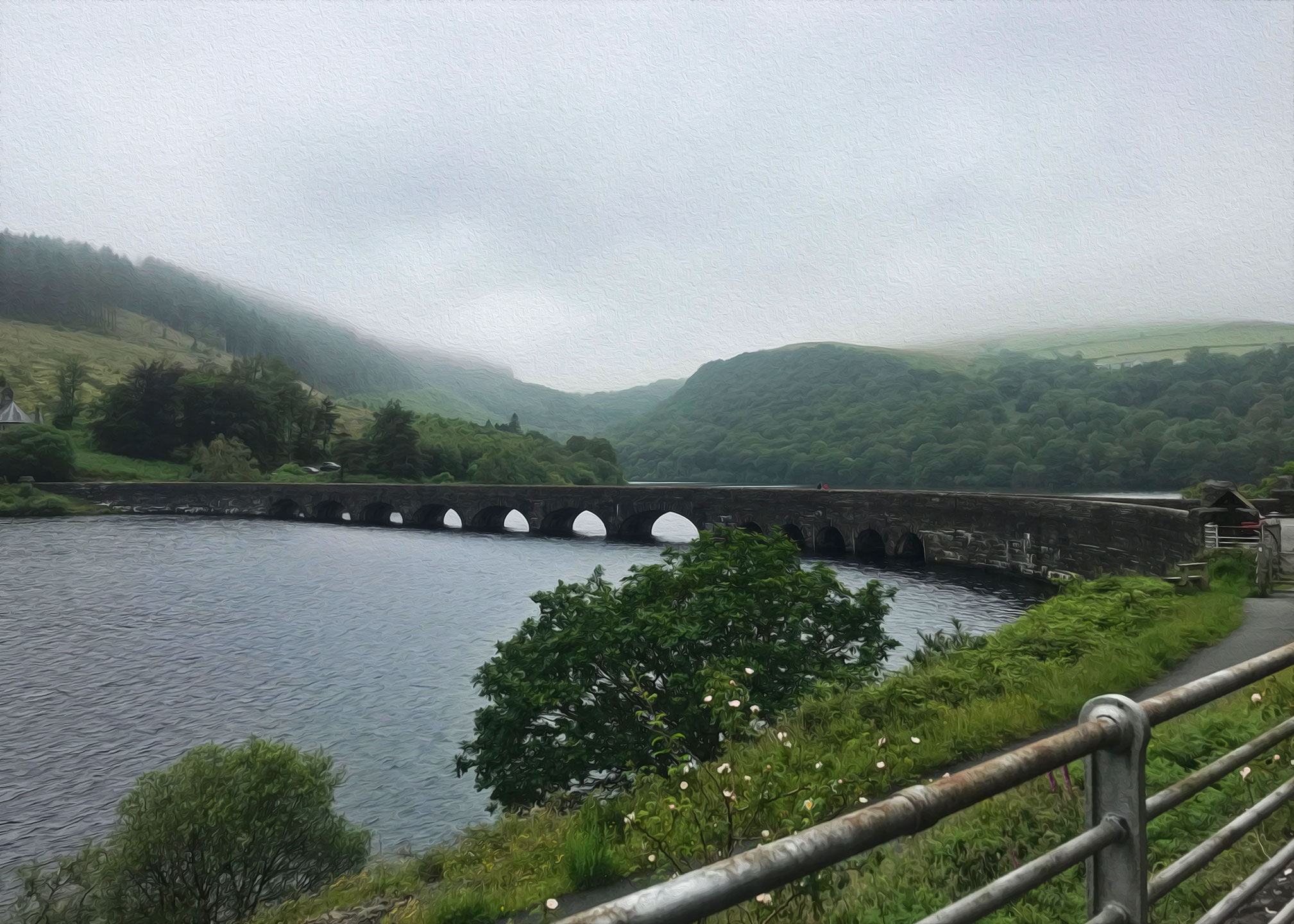 Since already in the valley I decided to continue up to Claerwen reservoir. It’s a cool road that takes you out of scattered patches of forest up to something that resembles the moors of Yorkshire, although in a Welsh, mountainous way. 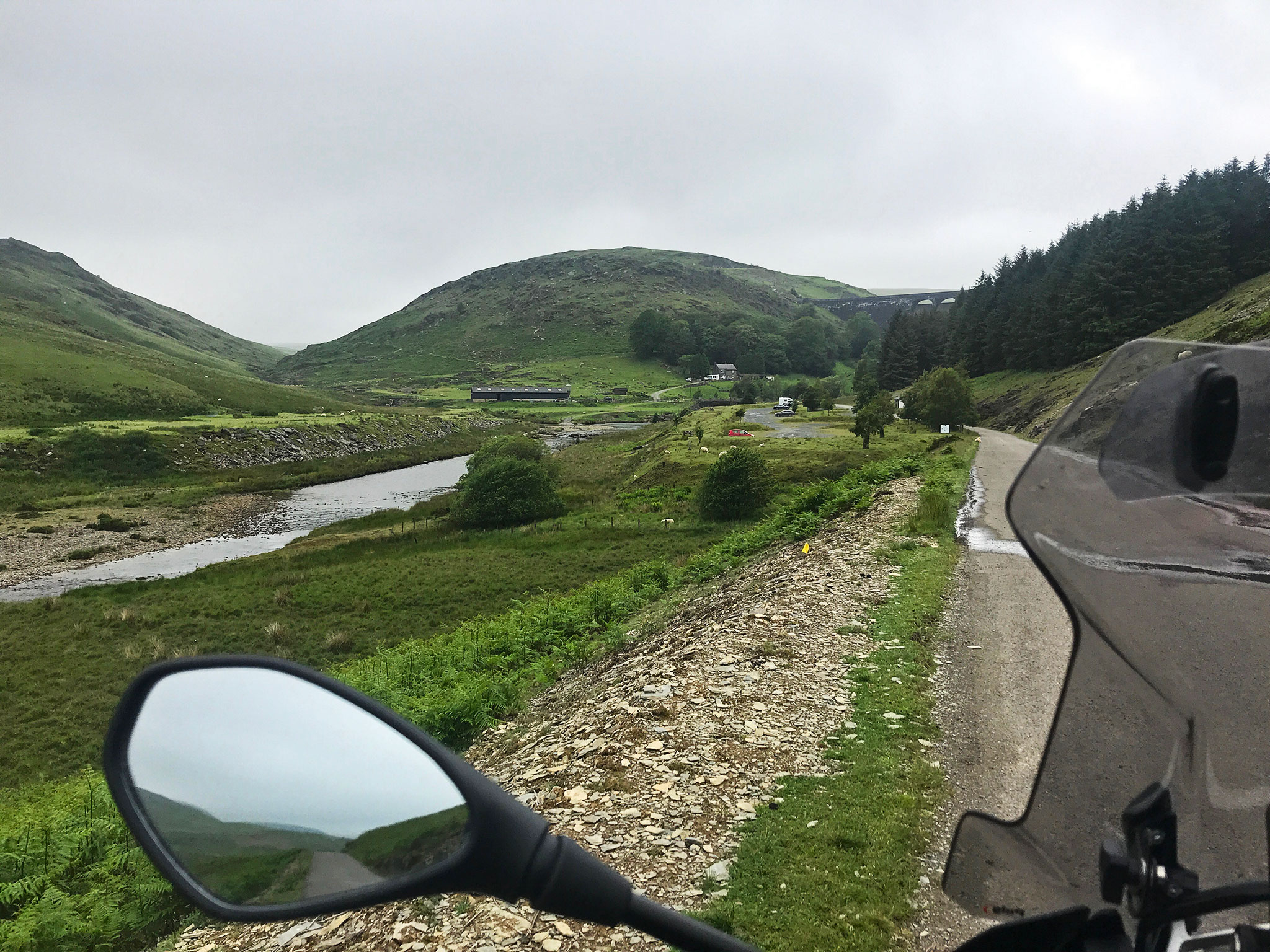 Road up to Up to Claerwan Reservoir

I encountered few people. The weather probably deferred many from venturing up there. Sheep on the other hand, there’s plenty of.  Their presence commands attention and sensible riding speed. 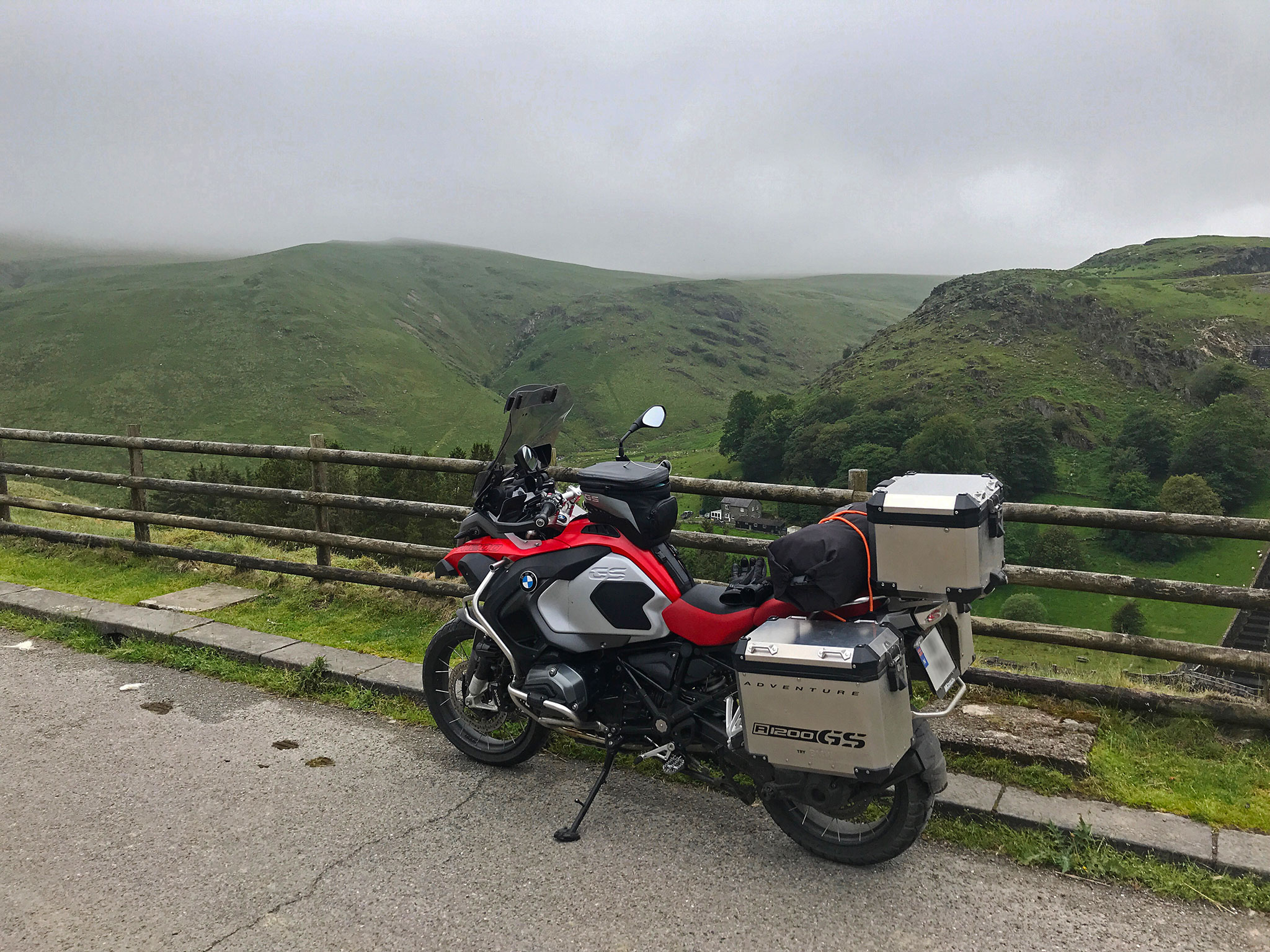 In Welsh highlands you’ll find sheep, lots of sheep. An animal that does, in most cases, act fairly predictably to traffic, to motorcycles, regardless of where, or in what country you encounter them. At least more predictable than cows.

Cows can be susceptible to suddenly run in the opposite direction than expected. And even straight towards you if perturbed. Anyways, If I continue down this path you might wonder if livestock was the real topic here. Well it isn’t, so back to the riding!

The road ended at Claerwan reservoir, so I turned around and went down the same way I came. Past the entry of the Elan Valley, in direction of the A470 south. On a whim I chose a small road suggestion by the GPS, it ran in a southwest parallel with the main road 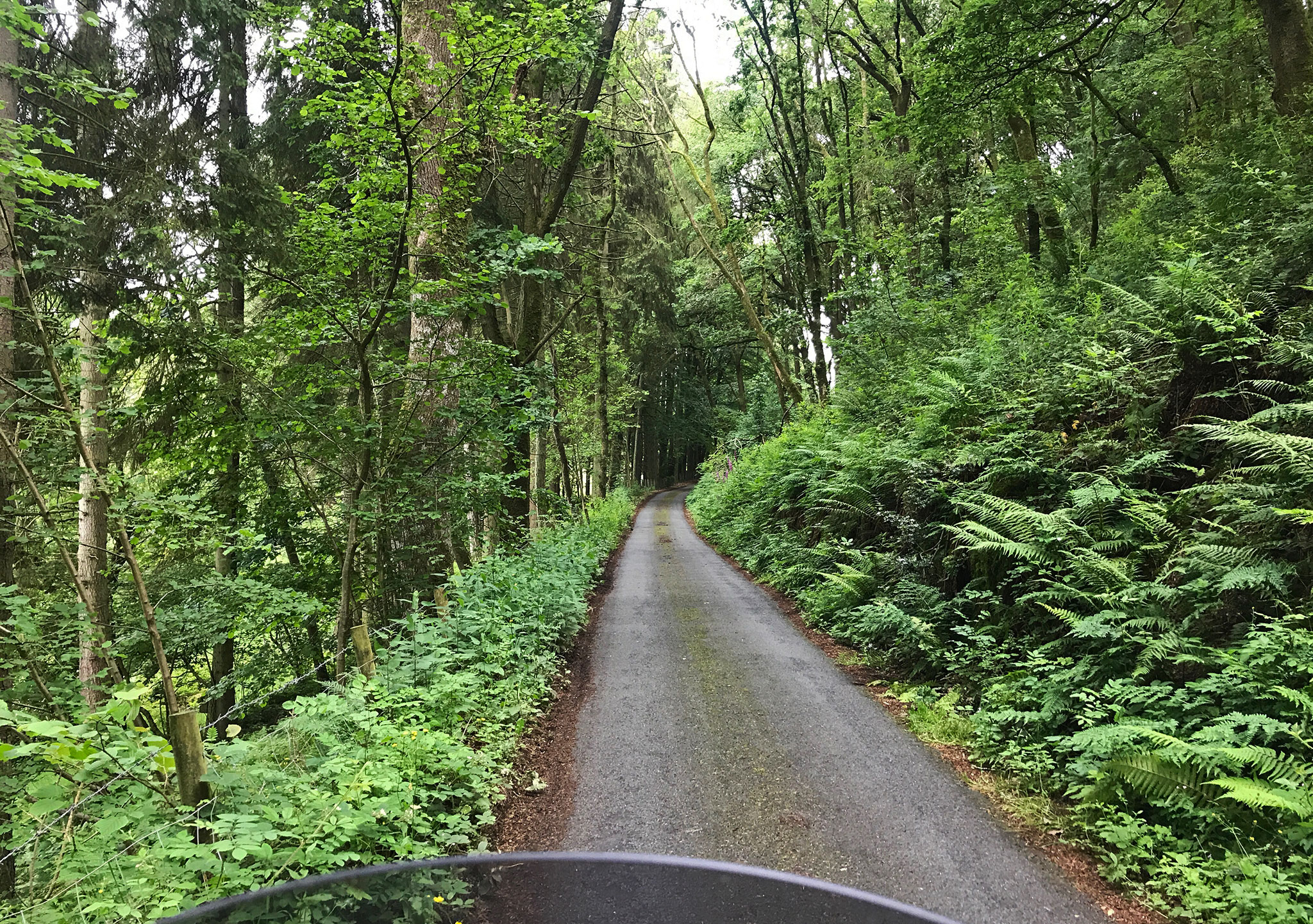 Another Welsh small road without any name, according to my GPS

I kept on crisscrossing along the river Wye to Newbridge on Wye, then onto the B4358 southwest in direction of Beulah. Where I got back on A483 which is more of a main road.

The plan now was to explore Brecon Beacon National Park. However, because I spent so much time on smaller roads, as usual  midday had faded into afternoon. Made a short stop in Llandovery, a town with history dating back to the Roman period. Where you also find the Llandovery Castle ruins, or Castell Llanymddyfri in Welsh. 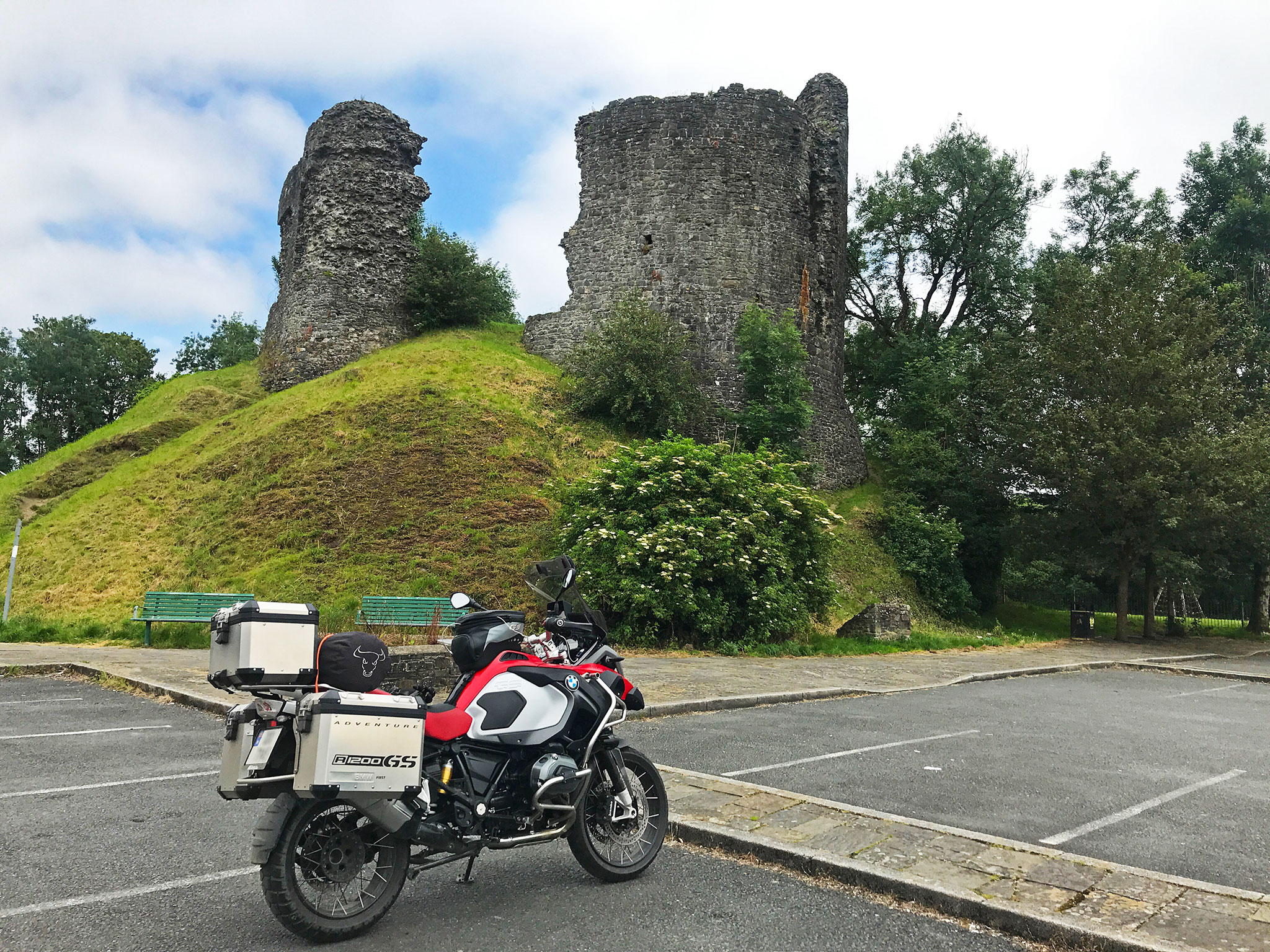 A stop at Llandovery Castle ruins

I had made the decision to make it to Oxford before the day ended. As a result the Brecon Beacon National Park experience was reduced to riding the A40, along the edge and continue west. Kinda sad but well, one cannot win them all, nor make it to see everything. 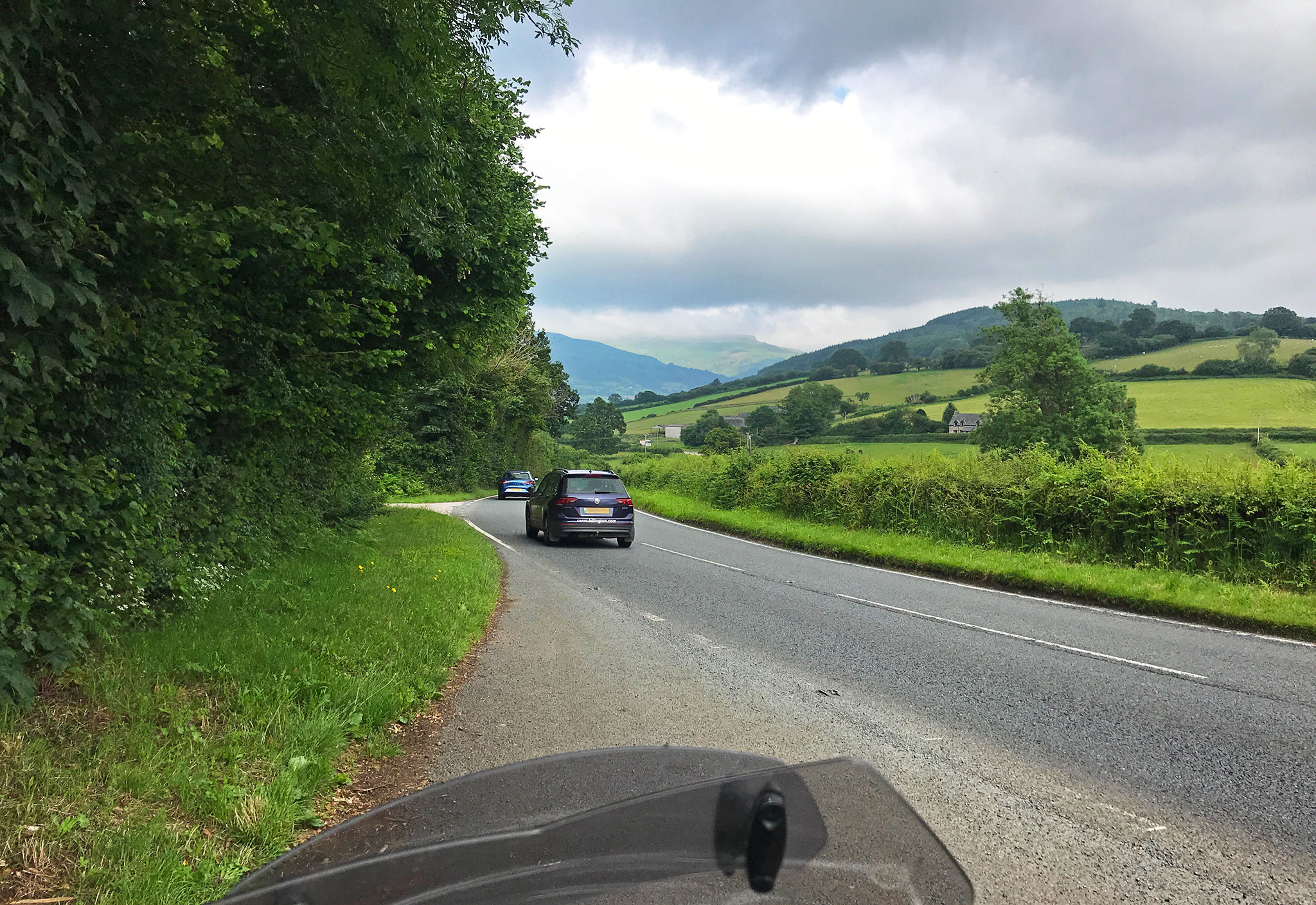 Along the A40 towards Brecon Beacon National Park

Why the rush? Well my plans had, all along, been to make a swift ride-through North Wales, Mid and South Wales, then southwest England, towards Folkestone. Where I would “hop” on the Eurotunnel to Calais, cut through France, ride in direction of Western Swiss and French Alps.

However, as you will find out if keeping reading my rant, those plans went south. But I didn’t know that at the time. Meanwhile the weather had improved. Even if somewhat too swift the ride to Oxford was at least going to be pleasantly dry.

And swift it was. I stayed on the A40 till Gloucester, carried on south of Cheltenham and kept on west. Flipping through booking.com pages I realized staying in central Oxford wasn’t going to happen. Poor parking options and price made me decide on accommodation elsewhere.

I landed on an Inn called Bird In Hand. Situated in Whiteoak Green about 25-30 minutes outside of Oxford city. A quick search revealed plenty of great reviews and few average ones. 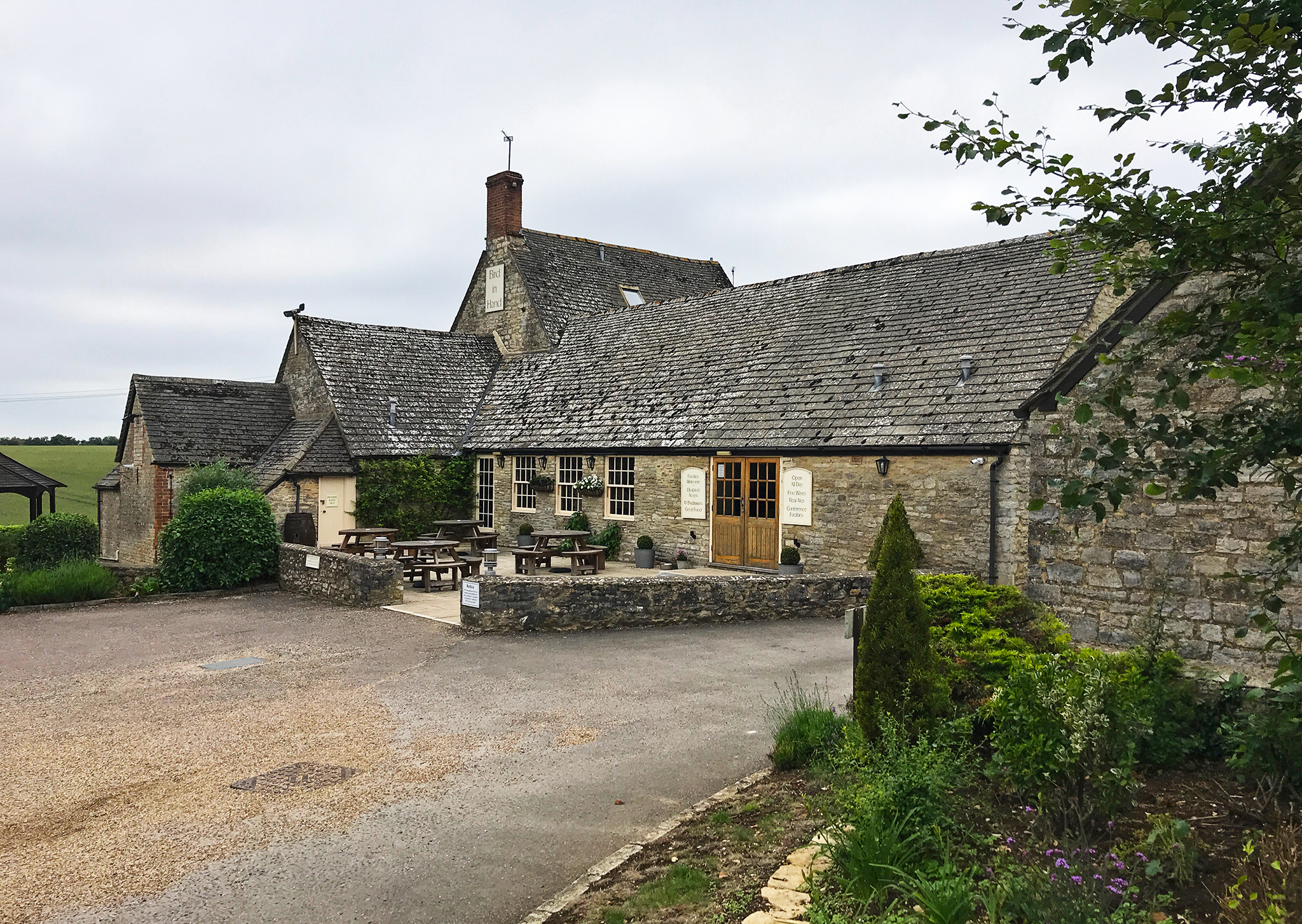 Turned out to be an excellent choice in every respect. If you’re planning to go visit Oxford, yet for various reasons, perhaps you drive, and  don’t fancy staying in town, I can recommend Bird In Hand.

There my day ended, in pleasant countryside surroundings, with a good meal and a couple of pints in my belly. The next day I would continue west, to Folkestone. 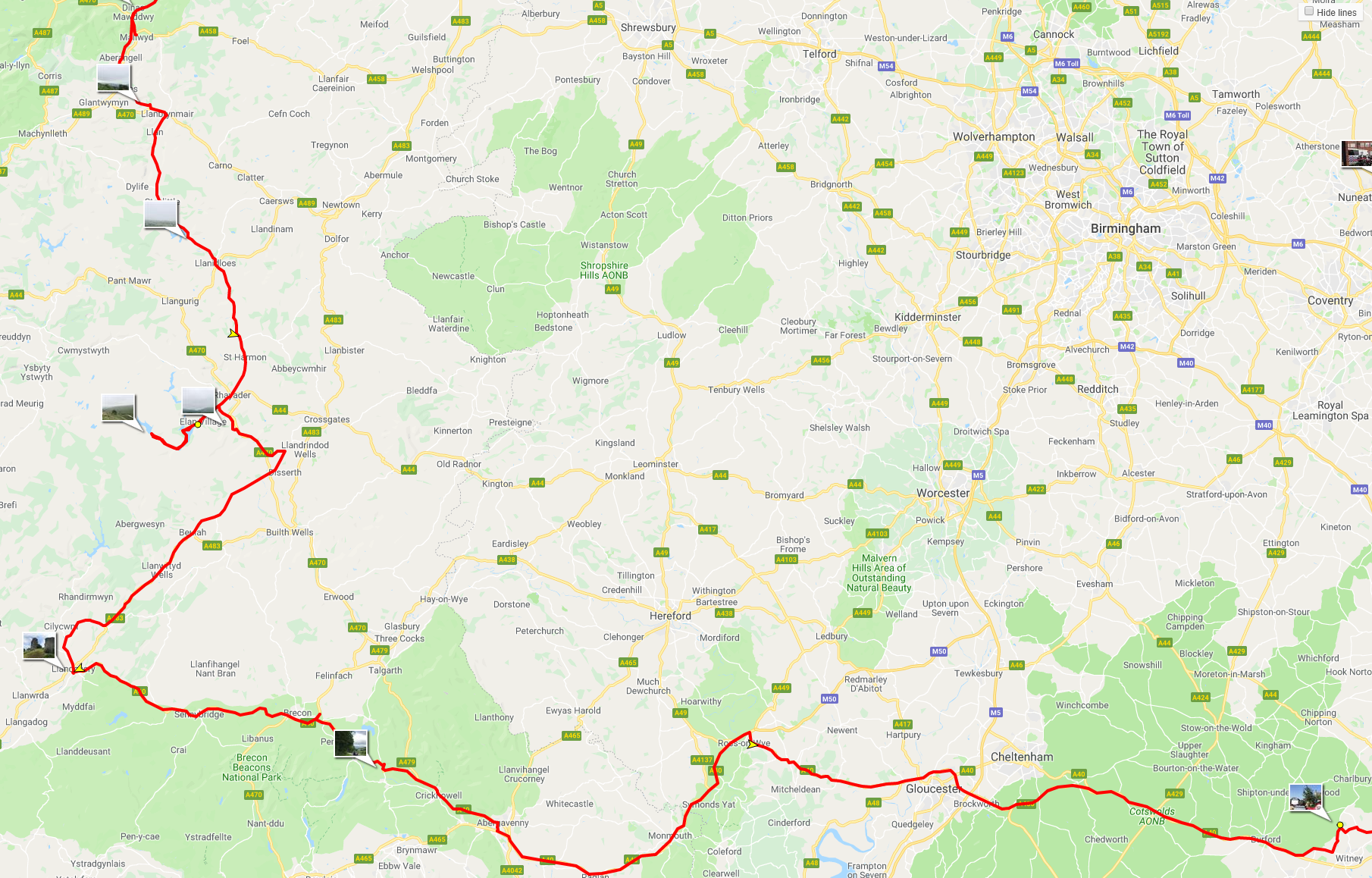 The route of the day, from Mid Wales to Oxford