But how good are they? Naturally I had to find out.  The tires from last year were almost done. So my BMW R1200GS Adventure was fitted with a set of the Anakee Adventure.

Michelin Anakee Adventure was chosen because I wanted to try something new. Have had great experiences with the former set, Metzeler Karoo Street. These are great tires as well, you can read more here.

The immediate impression of the Michelin Anakee Adventure is that Michelin have attempted, like Metzeler with Karoo Street tire, to marry two worlds.  Attempted to bridge road qualities, with off-road qualities, and gravel or dirt capabilities. You can read details about the compound and materials elsewhere, like here for instance.

My post is more about the overall first impressions.

The thread pattern, block formations and spacing in-between is very different from those of, for instance, Karoo Street. Which proves to show that in order to come up with a good formula, it’s about the totality of contributing factors.

What hit me before, while scrutinizing the patterns and construction, is that, well at least to me, Anakee Adventure do have some commonalities with Michelin Sirac.  But the pattern is rougher, and the blocks are bigger. 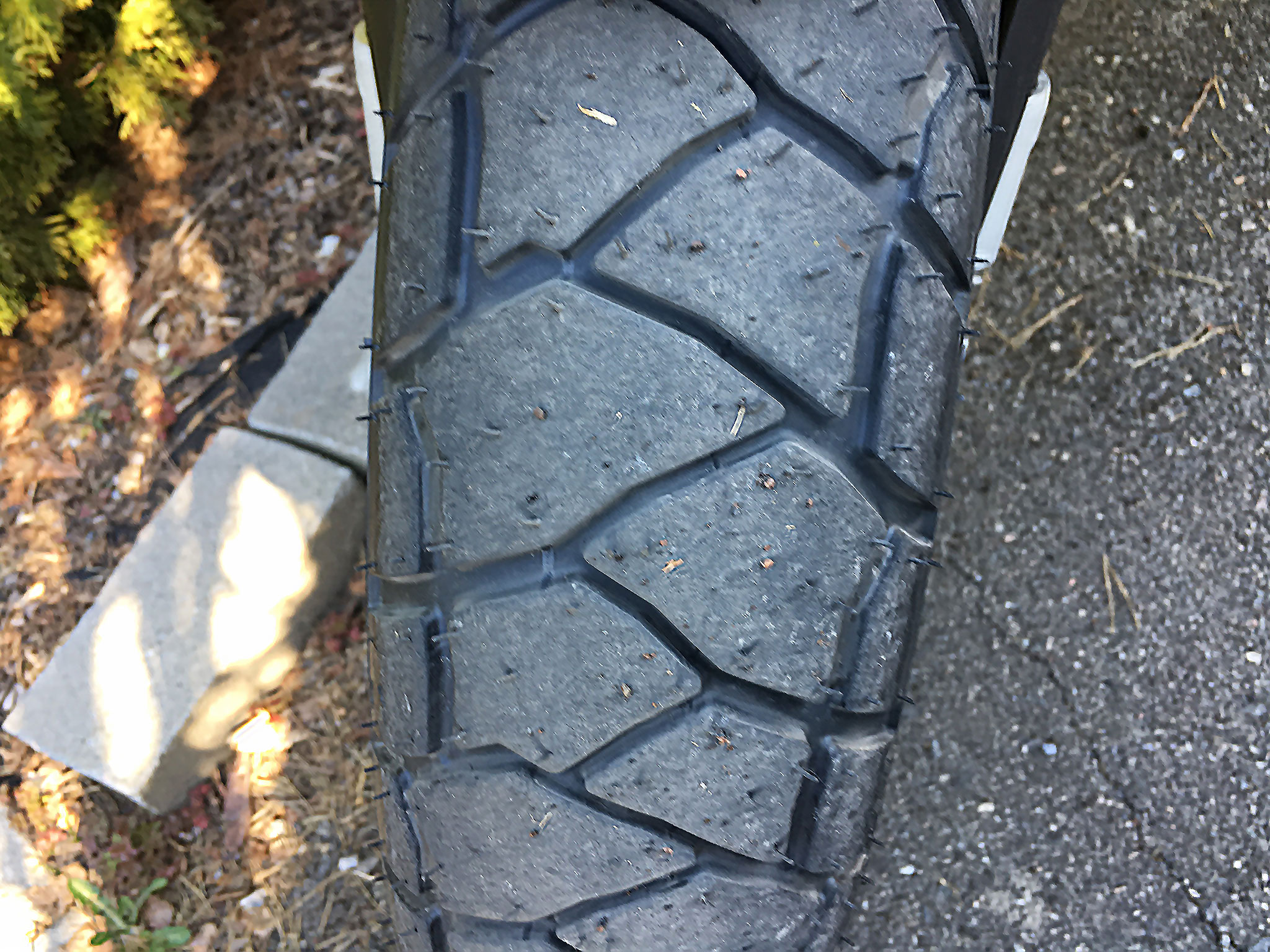 Norway, and as much my region, has lots of different road types. The sort that would explain why adventure motorcycles sells so well. Pavement ranges from the neat and smooth, to the incomprehensibly bad, rough, bumpy, with cracks or fissures the size of the San Andreas fault line.

Gravel or pavement, variations exists in abundance. More about this later.  Given the range of pavement there was no need to go very far to gather the first impressions. I just had to head out on the country side which isn’t  far away from Oslo.

What hit me immediately, and during the following hours, can be summed up as follows:

Michelin Anakee Adventure gives an immediate feeling of comfort. The likes I’ve only had with 90/10 or much more road biased rubber. From low speed and up to >100/110 + km/h no difference, the comfort was excellent. Still, they communicate in a way that makes riding in high speed, or so I’d imagine, highly predictable.

I’ve done enough distances, like 3 times in Europe, with various types of tires to say that, unless you only aim for offroad riding, comfort is (to me) absolutely paramount. Suffice to say, very much looking forwards to do an Euro trip this summer with these tires!

Have to say, although I’ve read quite a few reviews, I was kinda apprehensive about this particular subject. But I quickly realized, it was true.

Compared to Metzeler Karoo Street Michelin Anakee Adventure are delightfully quiet. The front tire is a world apart from Karoo Street, or its sibling,  Anakee 3 (aka “AnaScream” 3). It would be like comparing a rock concert with a baroque quartet.

In fact the nearest comparison I can make would be the 90/10 Pirelli Scorpion Trail 2. They’re not quite there, but close. I got used to the howling, resonance like sonic (dis)quality of Karoo Street. Anakee Adventure does not produce any noise that bothers me. Huge plus! 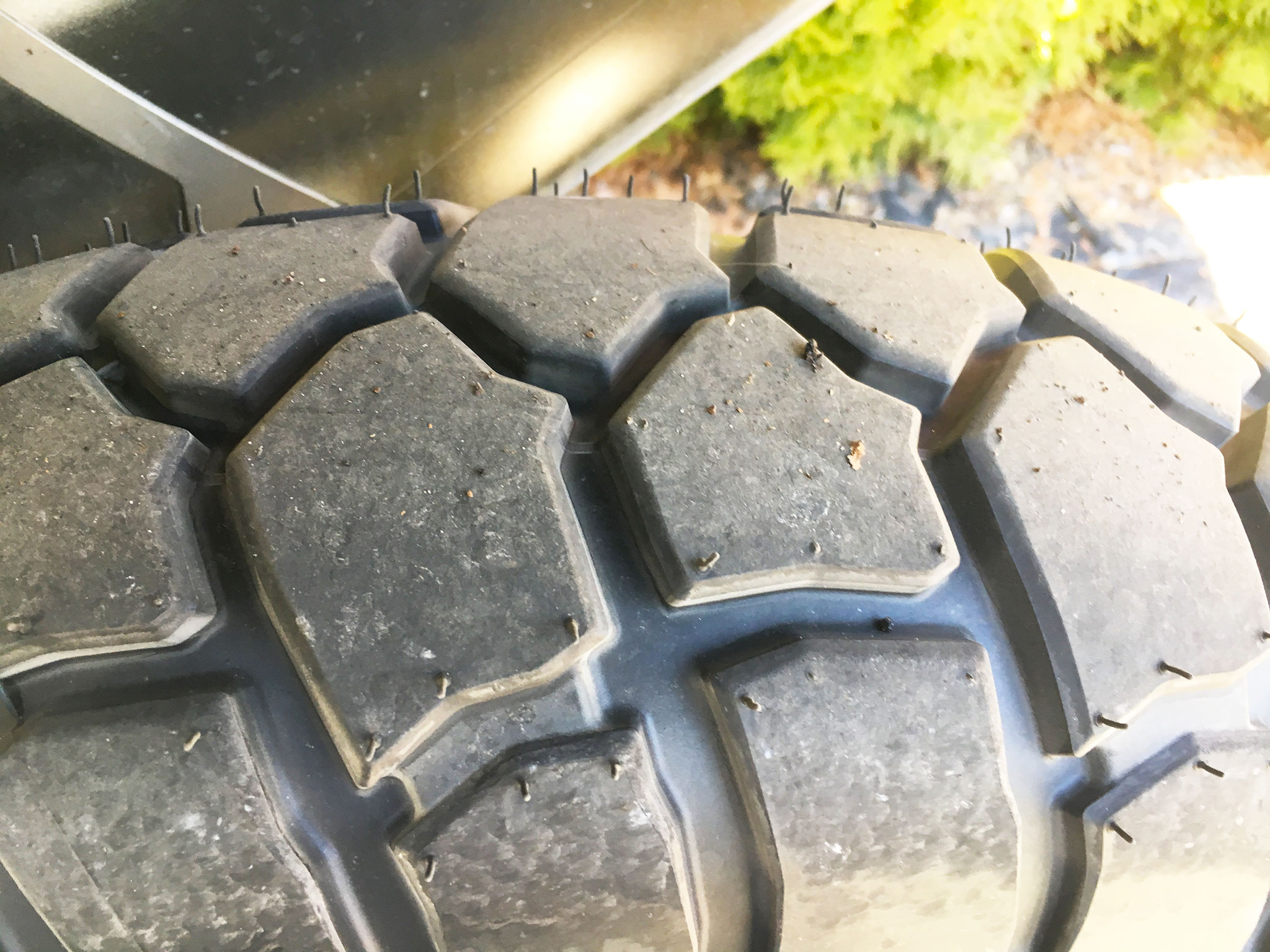 Michelin Anakee Adventure is a very well balanced tyre.  It is precise, with responsive steering, awesome balance and response. Regardless of type of pavement, from the rough and bad to the smoother, they were very consistent.  I rode lots of bad pavement roads with fissures, or cracks, bumps and what have we.

Michelin Anakee Adventure behaved as well as I’d expected, in fact it would be fair to say the tires exceeded my expectations. As good, if not better than Karoo Street.

As I broke them in I started to ride more aggressively. And the Michelin Anakee Adventure rear tire set did not let me down, in fact quite the opposite. Oh joy! Extremely well planted, regardless of how I either took corners, or hit the breaks.

They stuck to the various types of pavement as glue. Hard breaking, regardless of where or how was no issue at all. Now dry pavement should normally not be an issue for more modern, high tech tires. Anakee Adventure, whether we talk front or rear, will give you confidence.

I will get back to this later. Not had any possibilities for gravel and dirt riding this far. Have planned to ride into Sweden and do other parts of Norway later. Then it will be a lot about gravel and dirt.

Sweden alone offers in excess of 20.000 kilometers of gravel roads. If you like riding gravel and off the, by tourers, beaten track, then Scandinavia should be on your list! The region of Sweden I’ll be going to next has loads of variation when it comes to gravel, and also dirt.