This is part 3 of the MC adventure through Europe, starting out with a prayer, bike fixing and then a nice day’s worth of city exploring.

MC Adventure, trip to a workshop

Woke up Saturday morning, not too early, am sure much thanks to the German beers and food from the night before. Shaking off sleepiness thoughts centered around the problem situation and the “sick puppy” parked in the hotel’s garage. Traveling with that situation was not something I was looking forward to. Actually I’d made up my mind to stay in the city until it was fixed.

Ate breakfast and waited for the MC dealer to open. Mumbled a prayer, read a bit on the net, surely others must have had the a similar experience? Sure thing, but the stories were many, lots of variables, lots possible scenarios.

You know how this works, internet it can be a tremendous source of information, that also can lead you completely astray. Finally it was 9AM and I called, first got an answering machine, then through, possibly as the first caller that morning.

I explained my situation to what apparently was a sales guy, at first it seemed this wasn’t going to be a success. Pressed on a little bit more, finally the guy put me over to the workshop. In Germany they actually have mechanics and technicians at work, on a Saturday. In Norway you’d almost all workshops are closed on Saturday.

Talked to a nice guy, explained the situation to him. Sure, just come on over, he said. My spirit raised, looked the problem was going be fixed!

At the MC dealer – relief & a solution

The GPS led me a little out of town, up a hill, Along some winded roads that would have confused me without one. Motorradhaus Ebert in Wurzbug was the savior of my vacation. Top job!

Found the authorized dealer at the end of a street, went in and found a guy who spoke little English. Could have been the guy I got on the phone. Was told to take the bike into their workshop. There I met a nice guy who spoke English very well, most younger Germans do. He jumped right onto analyzing the problem. 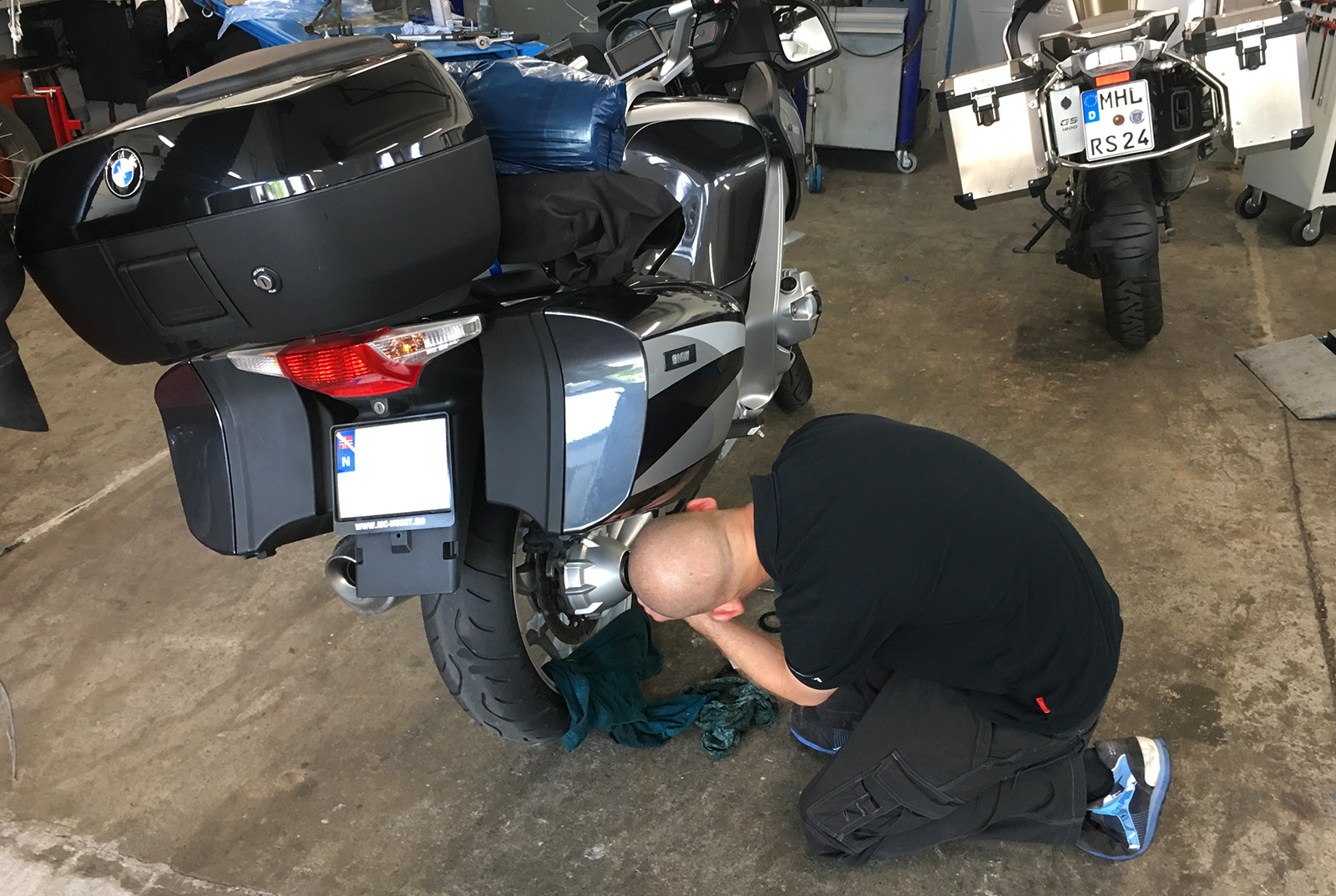 A few seconds was all it took. Turned out to be a known problem with the BMW R1200RT/GS models from the period 2005-2012. But to fix it, the rear wheel, crankshaft and a few bits and bobs had to come off. Definitely not a job I would have liked to do. 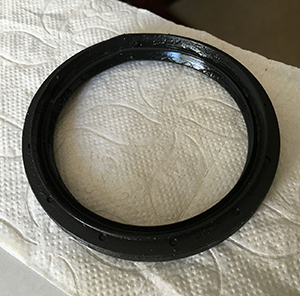 This little rubber part is an Achilles heel.

I decided (wisely) not the hang around and disturb the guy and wandered off into their showrooms, to look at bike and stuff. The entire job took about 2-2,5hrs. He also checked over the bike and discovered it’d used quite a bit of oil.

Some oil consumption is quite normal on older boxer engines. Especially if you’re going in excess of 130-140km/h and faster over a longer period of time.

Been thinking about buying a BMW MC?

It might be well worth to consider this if you buy a BMW RT, or any BMW with a boxer engine. Some are known to use quite a bit of oil, especially if they’ve not been ridden tough. Or enough. Reason being, the piston rings and cylinder requires some time to adjust.

This might last til 30-40k kilometers, or even longer. All depends. After this consumption should drop. Also important is to stick to one oil type, as changing from one type to another can lead to periodically higher consumption. Or so I’ve heard from people who should know what they’re talking about.

Anyways, where was I… ah yes. I thanked the guy. Made him understand he’d been my savior. The job cost me around EUR120, including the culprit part. I can only speculate what they’d charged me in Norway. Probably at least the double, if not more. The O-ring you can see on the right side.

If you ever ride past Wurzburg, have a BMW, needs or wants it checked, or maybe take service, I can highly recommend Autohaus Ebert. And of you decide to buy, or have bought, a BMW GS or RT from the years 2005 through to 2012, get this part (o-ring) changed.

Würzburg – for another day

With the problem fixed, and the bike totally ready for the rest of the adventure I could drop shoulders. Since I had paid upfront for two nights (got a better deal) I rode back to the hotel, parked the bike, and hopped into shorts’s sandals. Decided to wander off into the city. I now knew I would be in the Alps the following Sunday, so why rush?

Weather was great, temperature in the region of 30’ish C, so not too hot for city-sightseeing by sandal-foot. Below some “observations” from hours of wandering about. The main street just off the old bridge gets you into town. Perspective view of the rear side of the cathederal Residenz Würzburg – Impressive for being a residence, worth experiencing while in the city! You can hop on a riverboat, which I didn’t try Gate at the garden of Residenz Würzburg – Würzburg Residence. The next day I started on the leg along Der Romantisches Strasse, or Romantic Road, towards The Alps, which you can read about in another, coming blog post 🙂