Loncium, the word sound very latin. If you look it up on google you will find a brewery, and hotel in Kotchsach Mauthern, or rather Kötschach, in Austria.

July 2nd I knew absolutely nothing about Kötschach Mauthern or Beer Hotel Loncium. How  I got there, well read on and you’ll find out!

Another beautiful morning in Austria

Nothing, well few things (for me), beats being on a motorcycle adventure, when the weather is good. Austrian mountains bathed in morning sunlight isn’t half bad either.

After a late’ish breakfast I left BioHotel Schweitzer and rode east towards Innsbruck. Made a quick stop at a BMW dealer to pick up some visor cleaning spray, then continued along the 171 towards Strass im Zillertal. 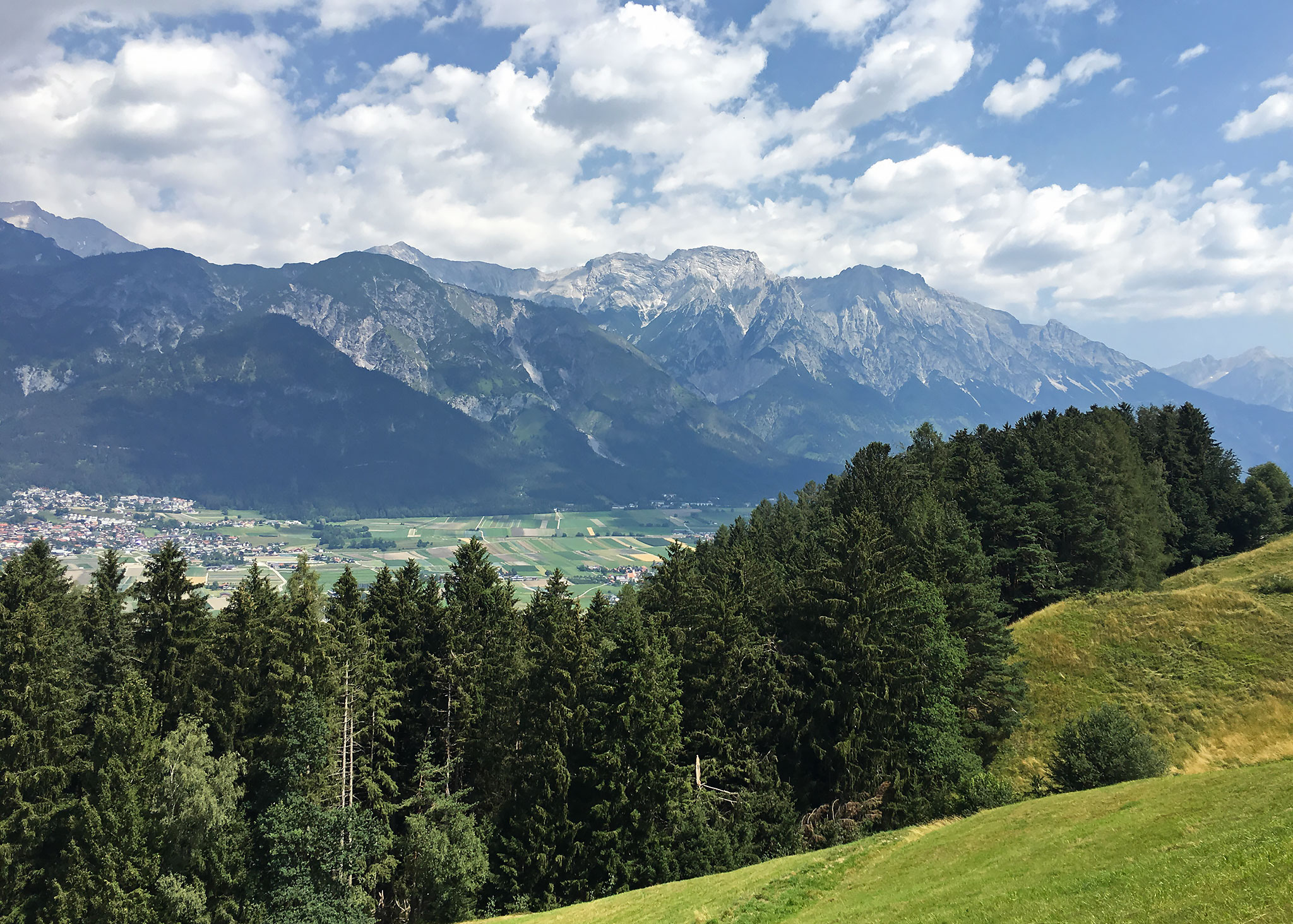 Overview from along road 171, north Innsbruck to the left

At this point I had no plans (as usual), just an idea to continue east and do some of the eastern Austrian mountain passes. Took the 169 slightly south towards Zell am Ziller, thereafter back on a more eastern course. 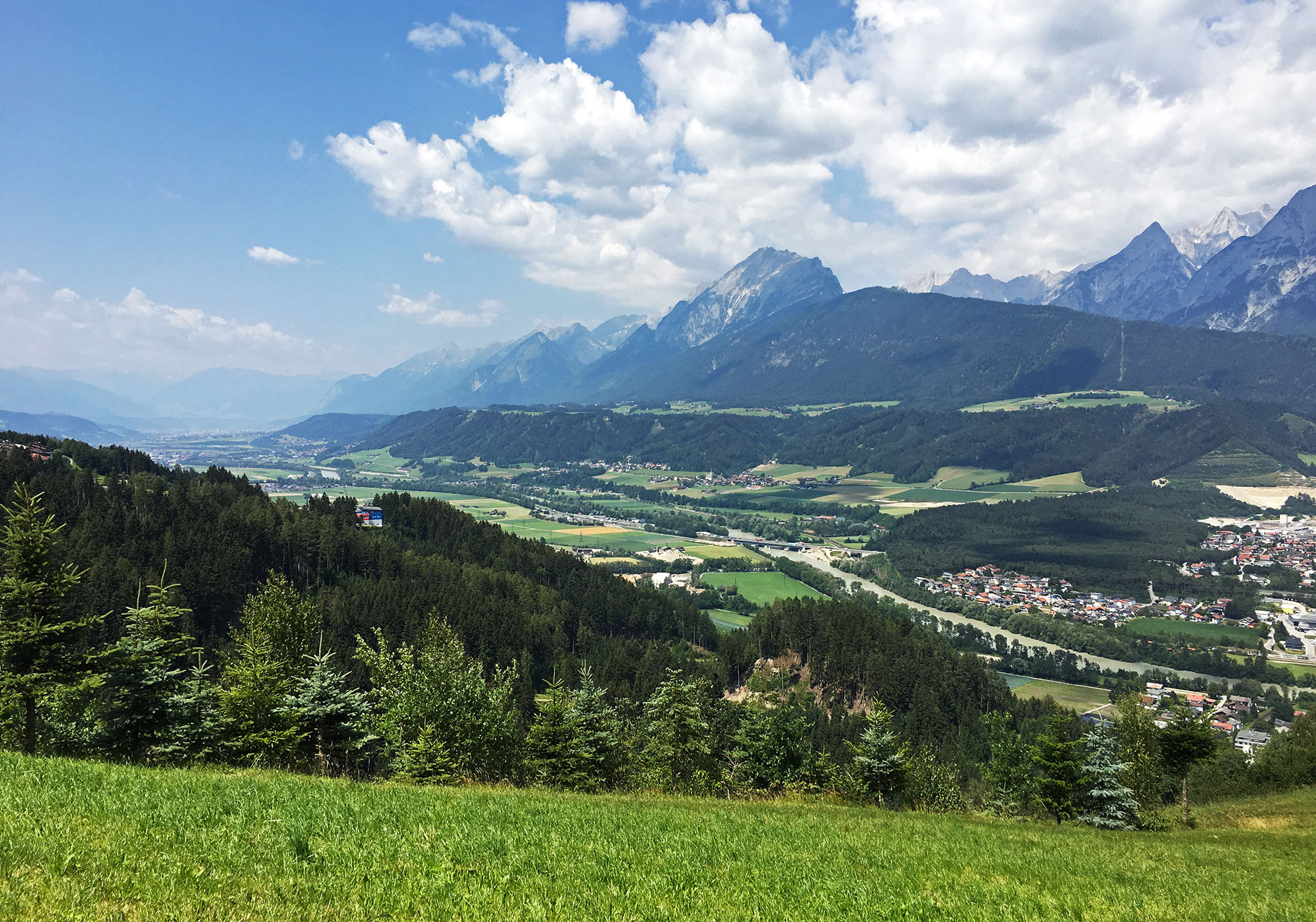 Wiew northwest, outside of Pill (yep, it’s the place name!)

I’d never been in this region of Austria before, but both south and north. From 169 onto Gerlos Strasse or 165, it started to climb up a bit. The road became more interesting, twisty.

Coming up Gerlos Strasse into a corner I spotted a dam up in front. Continued past it and further up, then stopped at a view point to take a picture. I don’t know about you, but I’ll never ever get tired of taking in views like this. 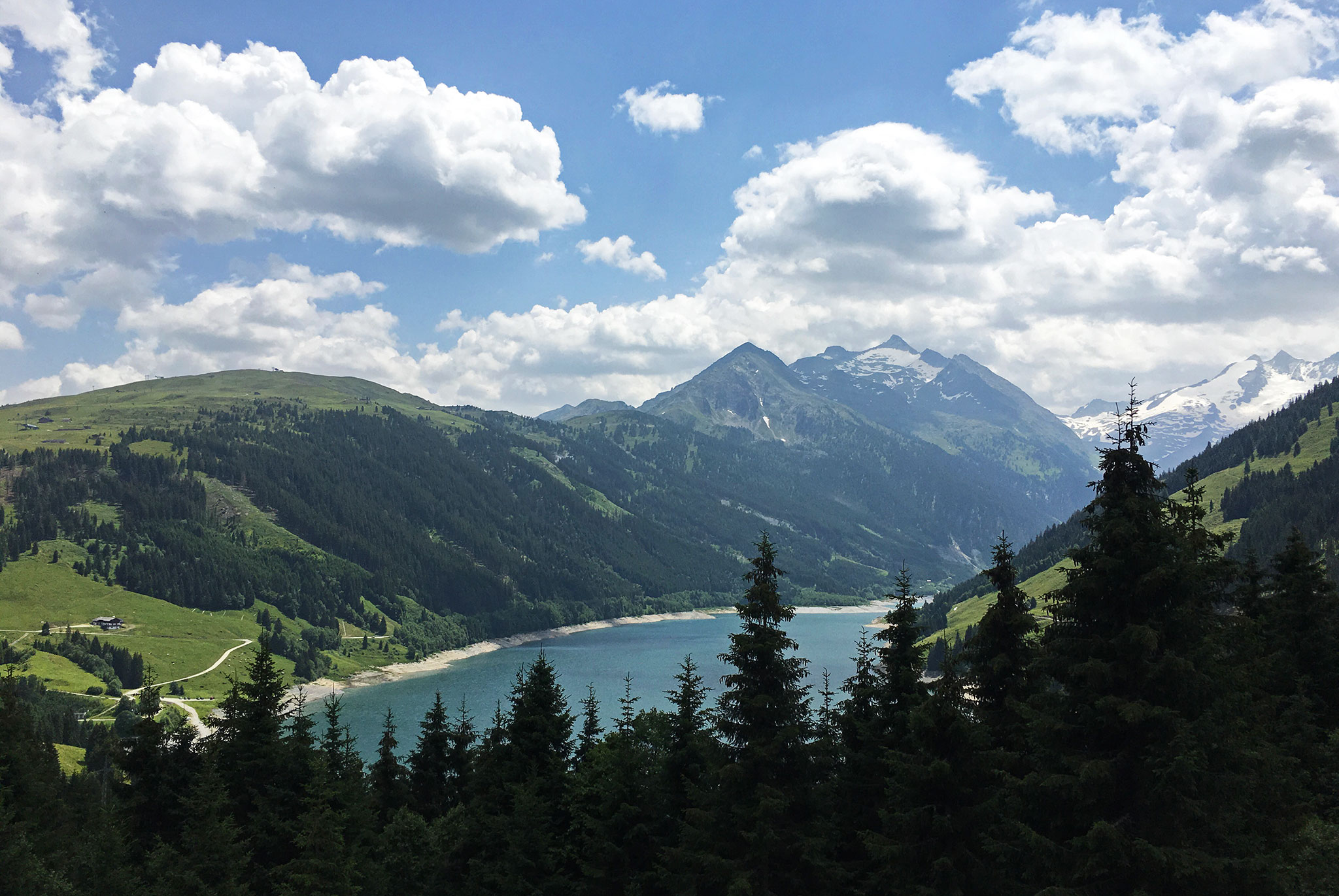 Speicher Durlaßboden, the water basin or reservoir in Gerlos, Austruia

The lake with the name Speicher Durlaßboden is a water reservoir. It doesn’t look very reservoir’ish, at least not when observed like above. Made a stop at the view point to grab lunch & checking out the map. So now, where to? 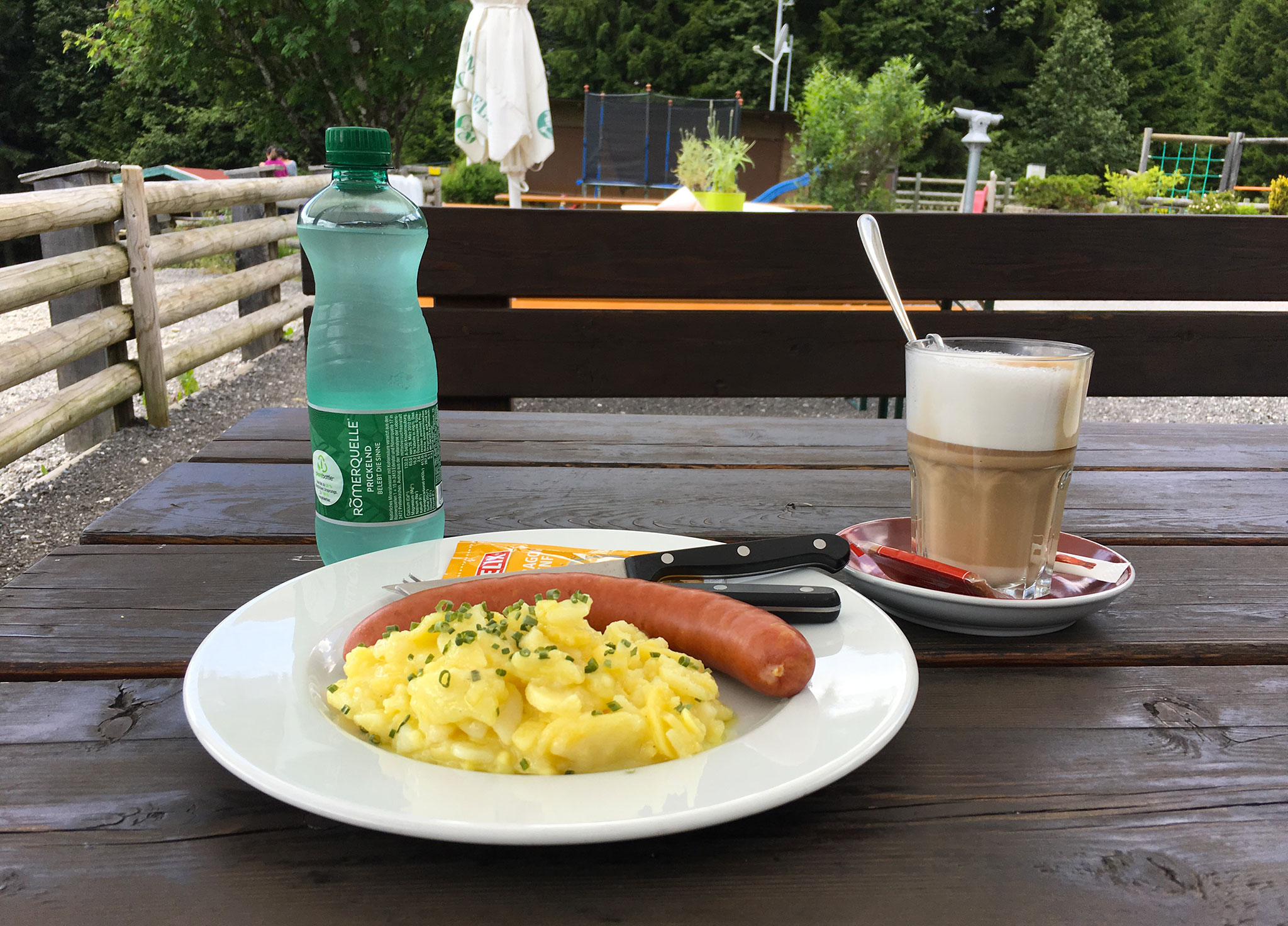 Lunch at Speicher Durlaßboden, not much but it works for a biker 🙂

Sitting by a another table was a couple of older motorcycle riders. Now, I am, by some standards, also an older guy but they were older than me. Snapped up a few words on distance, apparently English.

Since not knowing the area and with the usual lack of definite plans, decided to ask some questions. Turned out to be a smart move, possibly one of my best decisions this far on the adventure.

David & Mick were two very nice chaps who had crisscrossed Europe together, every summer for the past 7 or 8 years. They had accumulated a tremendous amount of knowledge, about roads, where to go, what to see, and places to stay.

This translated into a surprising asset for me, a real vitamin injection for my not too well planned adventure. But that is what adventures are all about. Make plans, but not too detailed plans, and improvise!

We had a great conversation. I learned a lot in short time. They were passing through Austria, on the way to Greece, had planned to take Grossglockner high alpine road south down to Kötschach Mauthern. Then stay overnight at Loncium Bier Hotel, a hotel with its own brewery!

This sounded like an excellent destination for me as well. So I asked if it was ok for me to tag along, they said sure, and we rode together southwards. 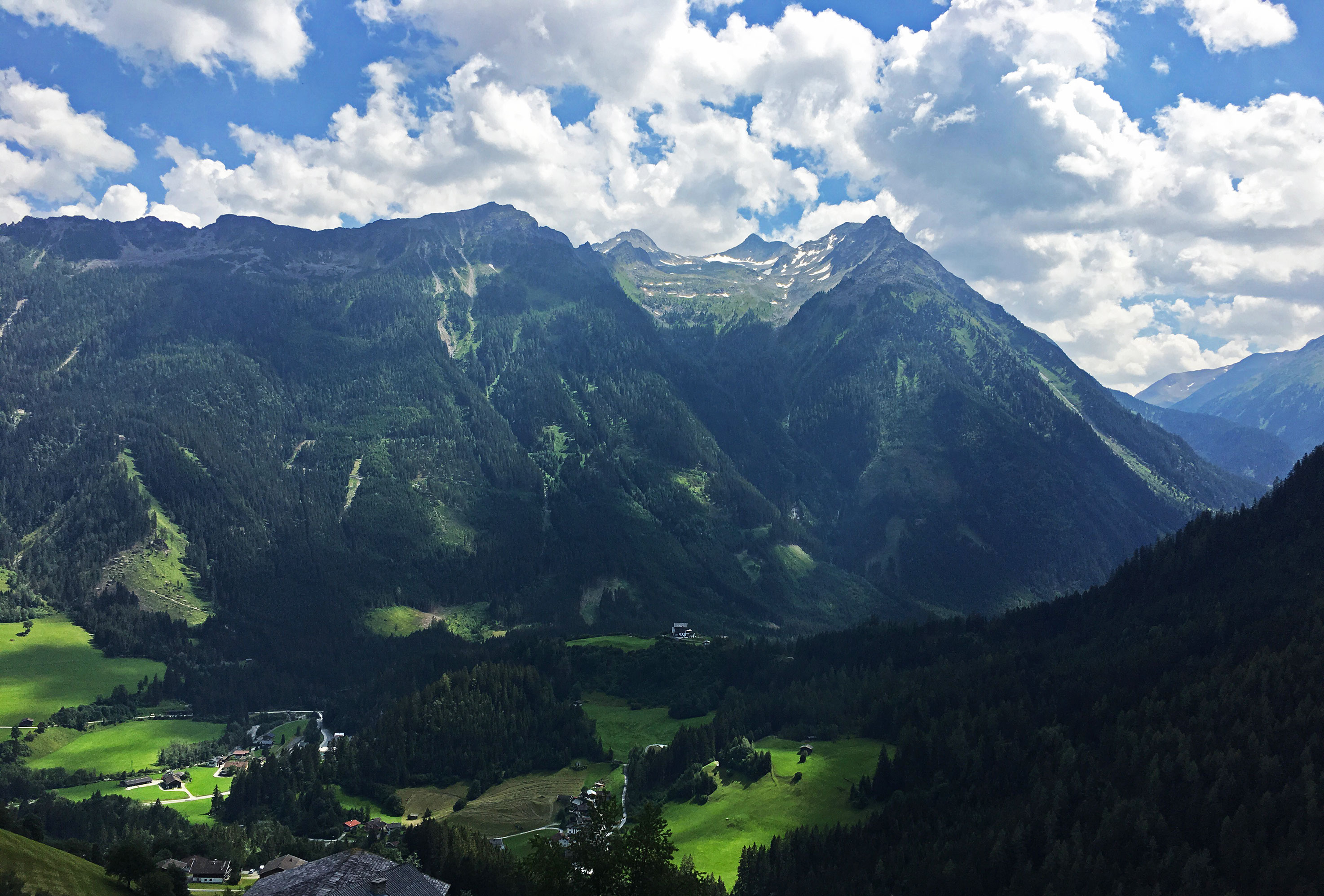 David, being the planner and navigator of the two, leading us down along an interesting road.

On narrow roads in direction of Wald im Pinzgau

Fun to ride in a party of 3, a first time for me. We stayed on smaller roads for as long as possible, eventually down on Austrian highways to make better progress.

Time was, as always when you’re having fun, flying fast.

July 2017 I rode across Grossglockner high alpine road from south to north. As in the case of Timmelsjoch in 2016, only one direction. So now, for the second time I was going to revisit, and experience a pass over again.

We rode past Mittersill, along the Mittersiller Strasse or road 168, towards Schüttdorf. Then onto the 311 to Schüttdorf where you enter the beginning of GrossglocknerStrasse from north to south. We continued to Ferleiten, where the Grosslockner high alpine road toll gate is and made a short stop.

There I spotted a weird looking car on the parking. Quickly realized it was a “shape of things to come”, a prototype or early version of a new model. It had a trailer, with fat cables running from car to trailer. Obviously packed with instruments. Two guys were busy with their head under the bonnet. 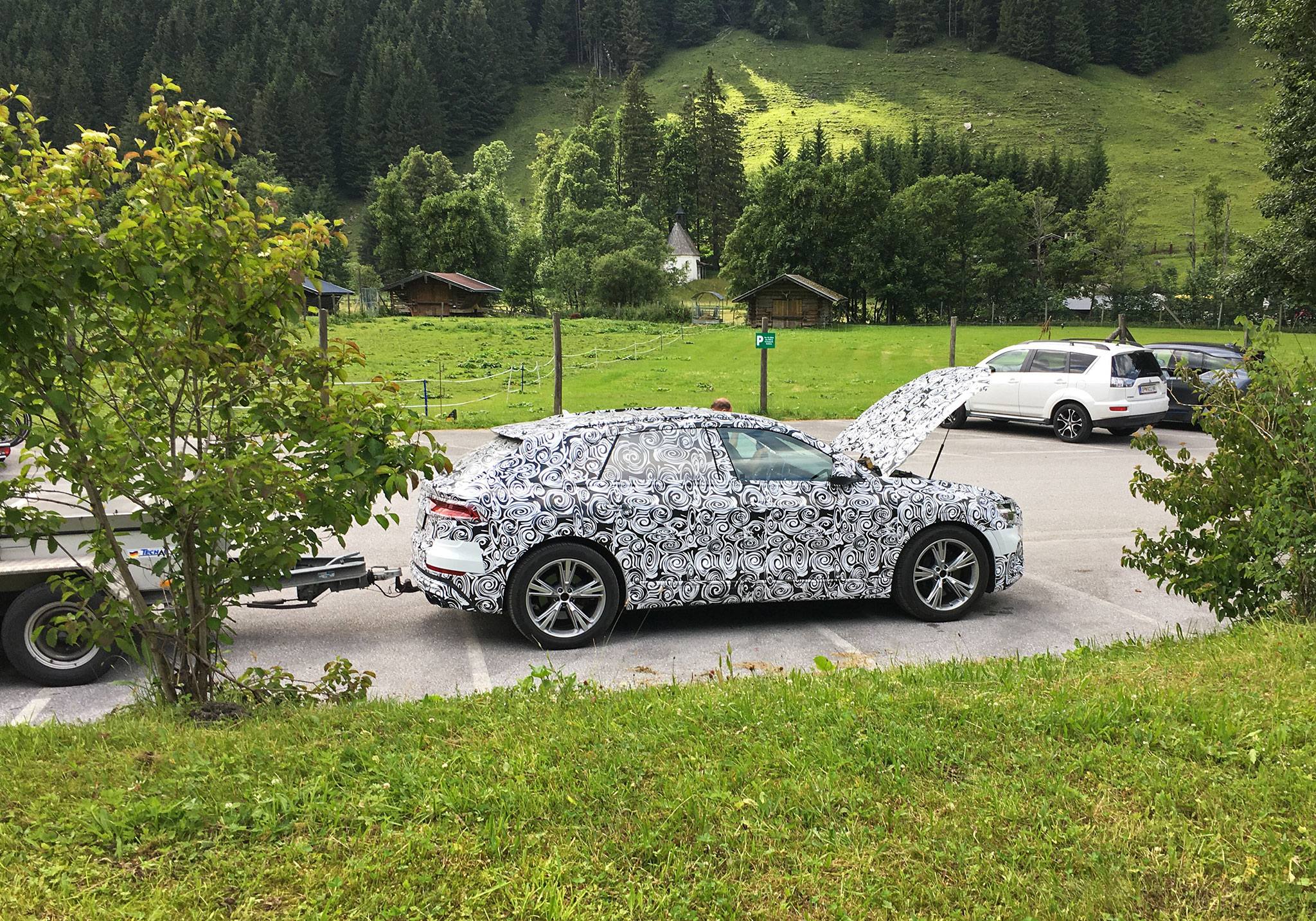 The car had German Ingolstadt plates, so quite likely I’d spotted a new Audi model out on a test ride.

Everyone ought to do GrossGlockner high alpine road, at least once in a lifetime. Some bikers like to do it once every year. I’ve met people who have ridden this road every summer for over 20 years!

We started the journey upwards, pavement was all dry, weather overcast but showed no signs of any imminent change towards the wet. Good news but things can change fast here, learned last year. 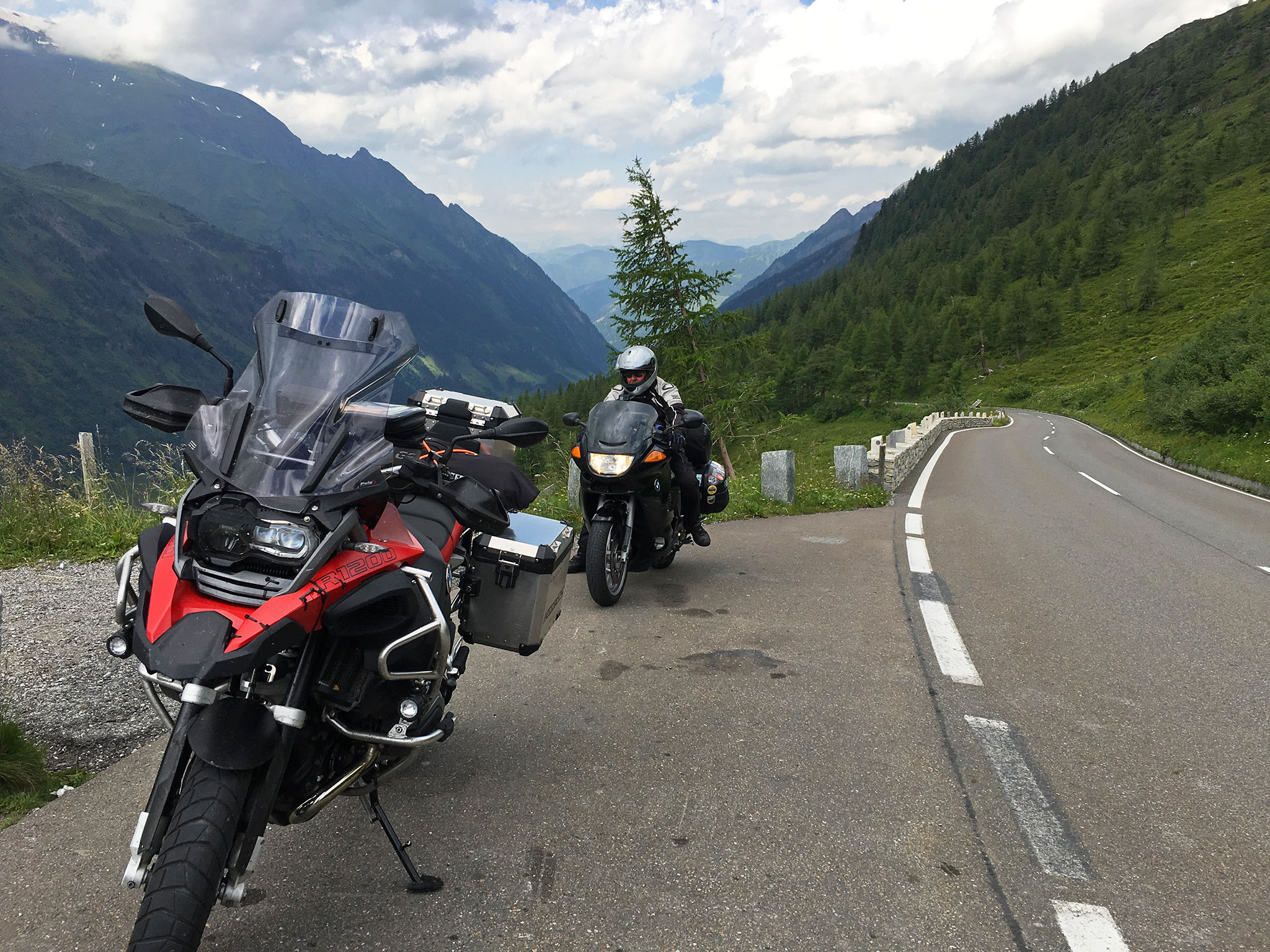 Short stop to sync, I arrived first, David right behind me

We rode up a few miles, made one quick stop to take in the scenery. From there we rode up to Edelweißspitze. To get there you ride up a winded cobblestone road with sharp turns. The view at the top certainly is makes it worth it. 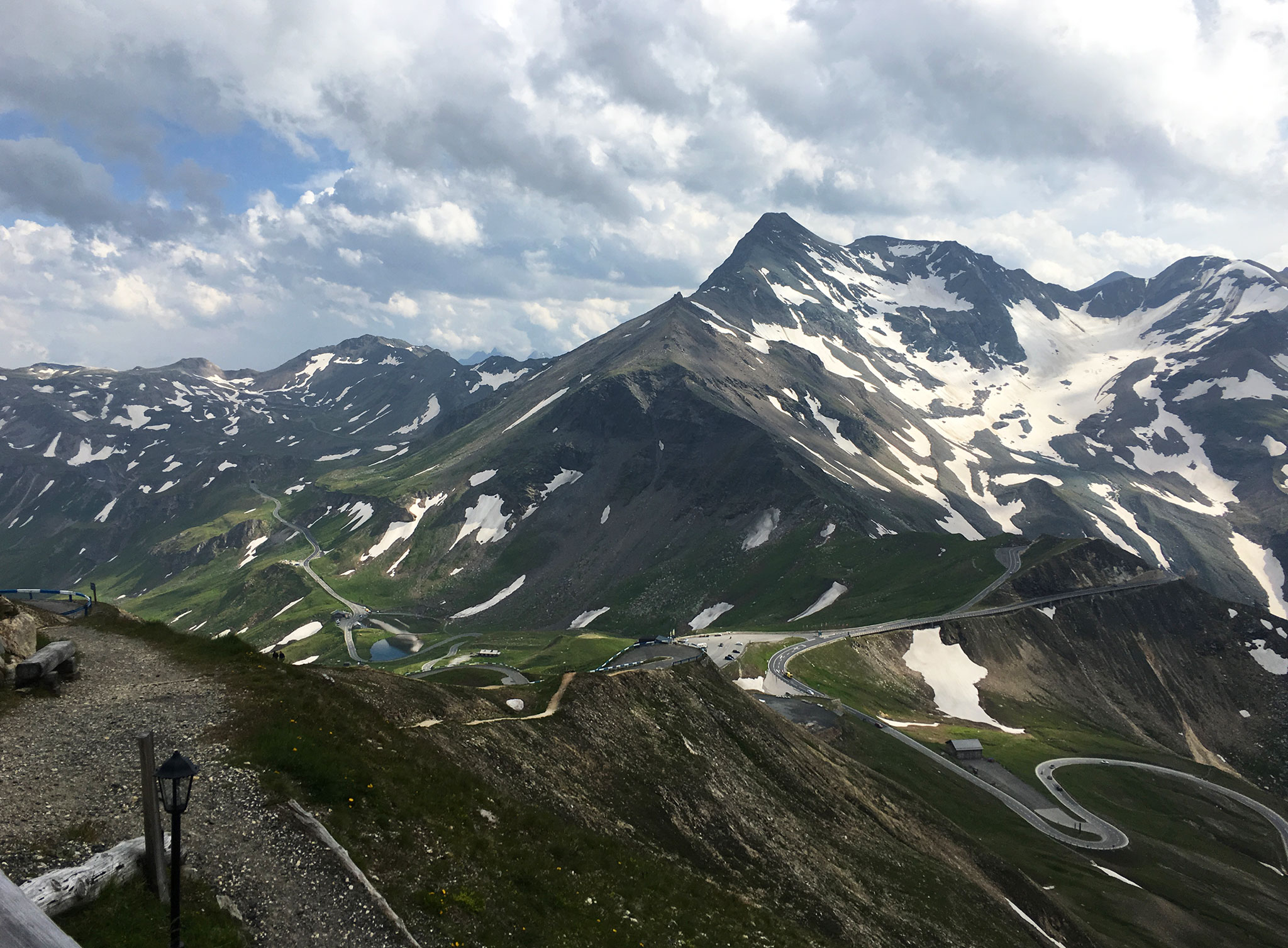 We didn’t stay long, my travel companions had many miles behind them before we met and wanted to make it to Bier Hotel Loncium before too late.

We did the remaining 120 kilometers non stop and arrived in Kötschach and Beer Hotel Loncium around 7PM. 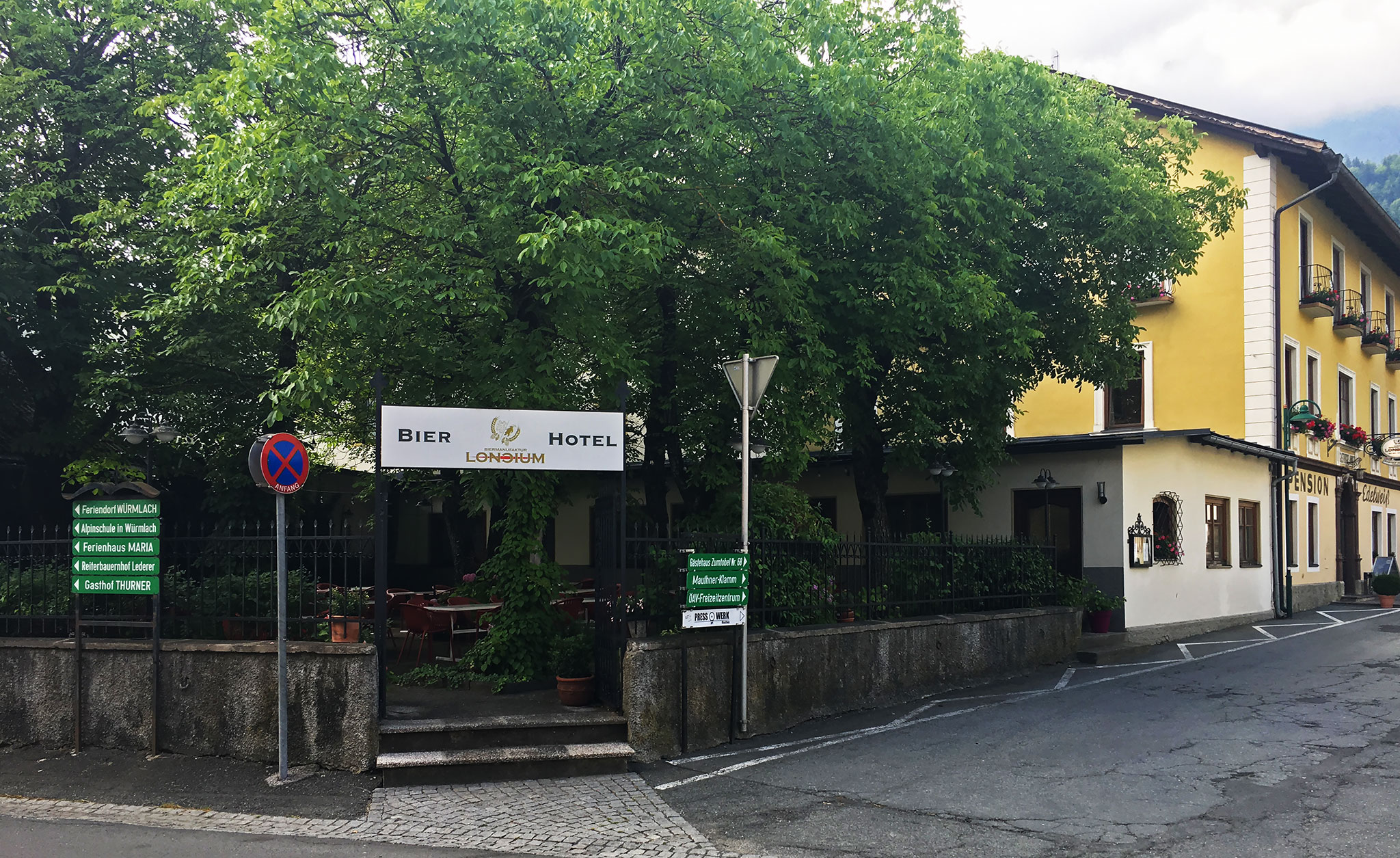 Bierhotel Loncium, when you’ve been here once you’d like to go back

Rode into a back alley and up on the rear side of the hotel. Here you find a huge garage specifically for motorcycle riders.  Loncium truly is a biker’s hotel with two entrances, one in the front and one (for bikers) in the rear.

From the lobby and the second floor, where you can find a pool table and sitting group, you glance through big glass windows, across to the brewery. 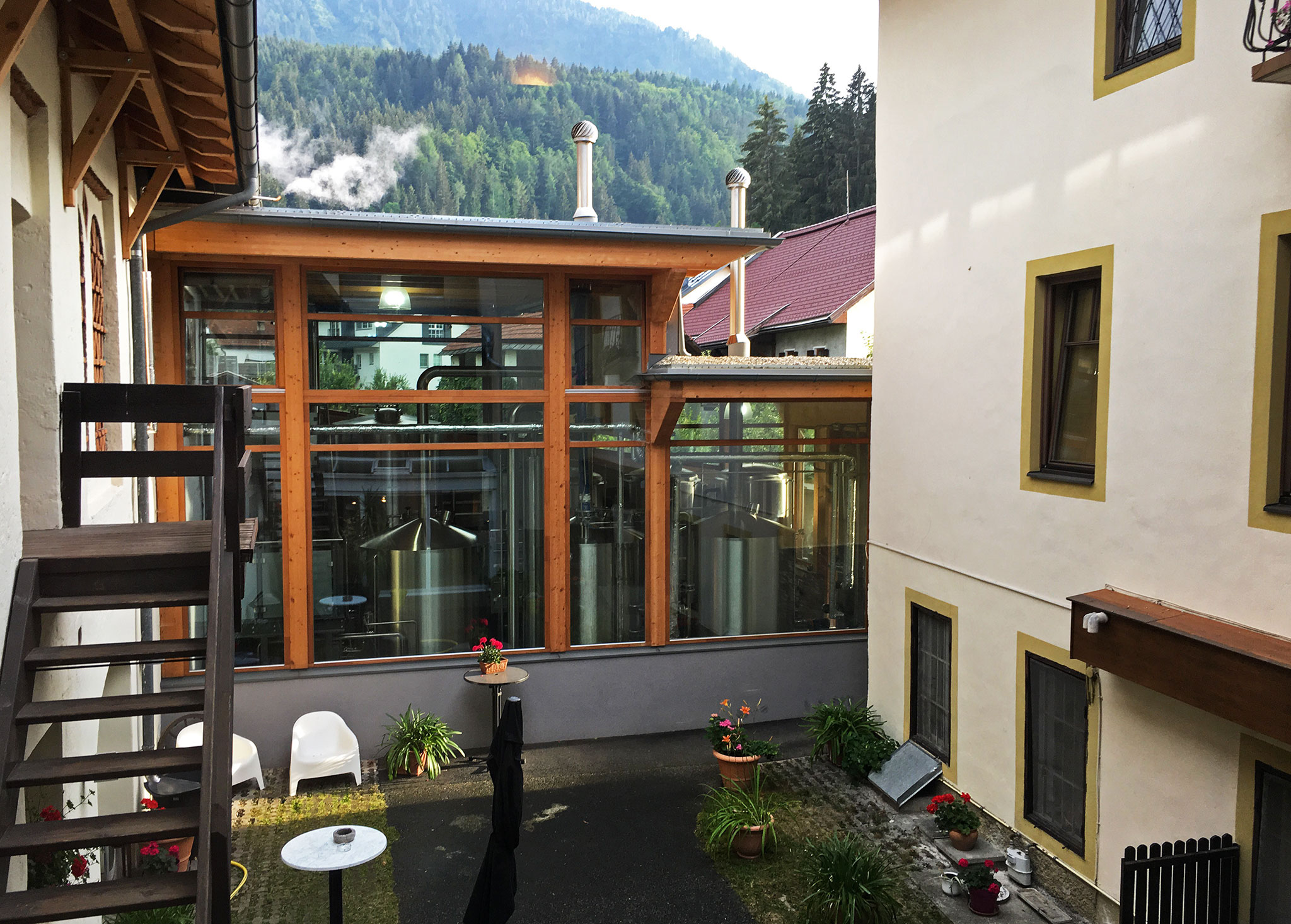 Loncium beer hotel, the brewery is right across from the hotel itself

Once installed we met up for dinner and a few beers. I can recommend both! 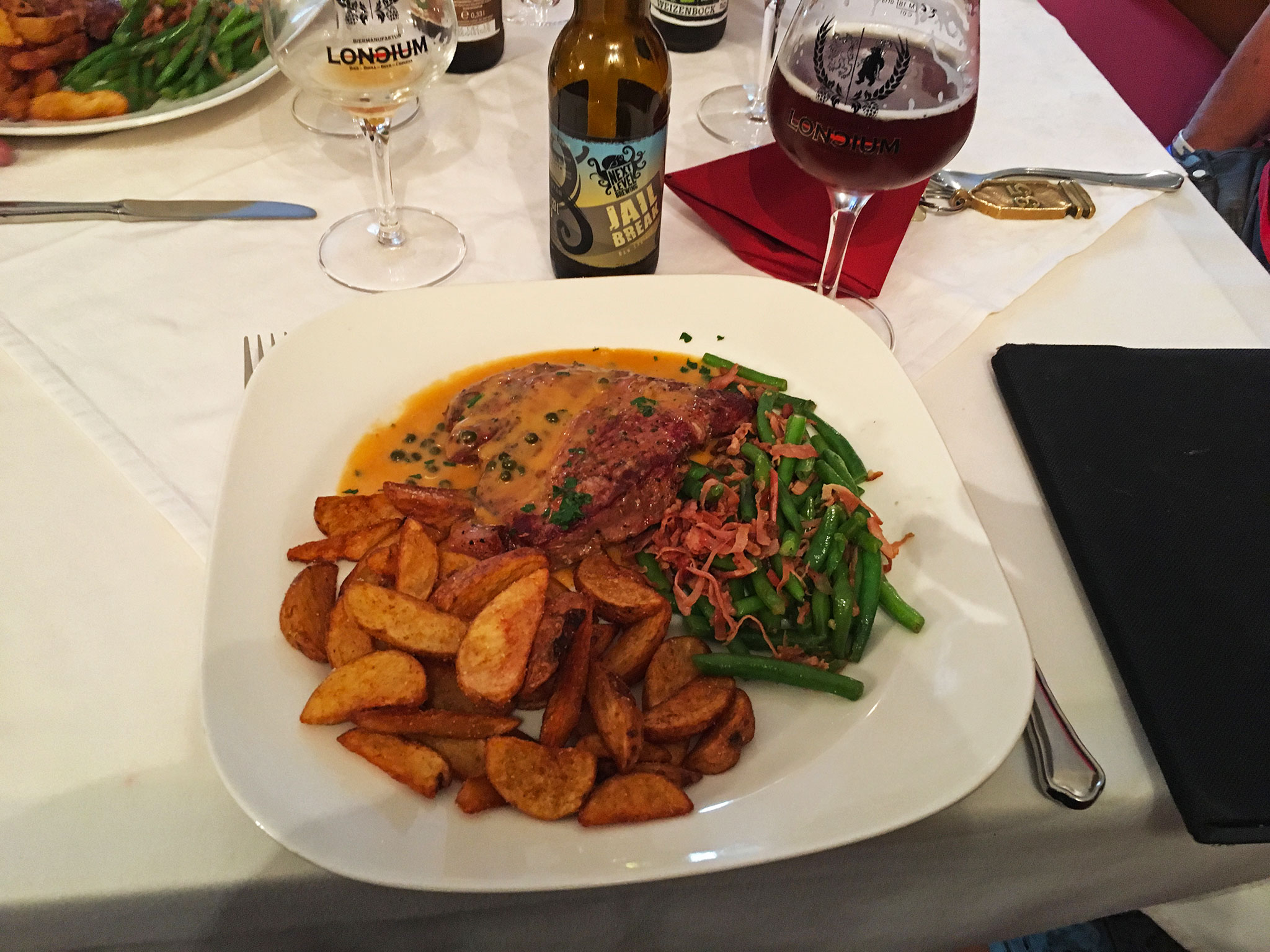 Taty dinner served with the shortest traveled beer ever!

During dinner I got a lot of good tips from my travel companions, where to go and what to do. More about that next time!