Last leg, or legs. Time had caught up with me. It would be a 3 day sprint. I wanted, and needed, a few days rest at home before returning to mundane life.

But even if the adventure was nearing the end, there still was some time left for explorations. I had no intention of wasting the last days on freeways. Yet some freeway riding, especially through Denmark, was unavoidable.

I had some route ideas, and these ideas would influence the road choice while going north.

From Karlovy Vary I went slightly north, and rode along the Czech/German border. Still on small roads, leading to interesting discoveries and unexpected border crossings. Some of which happened almost without me knowing. 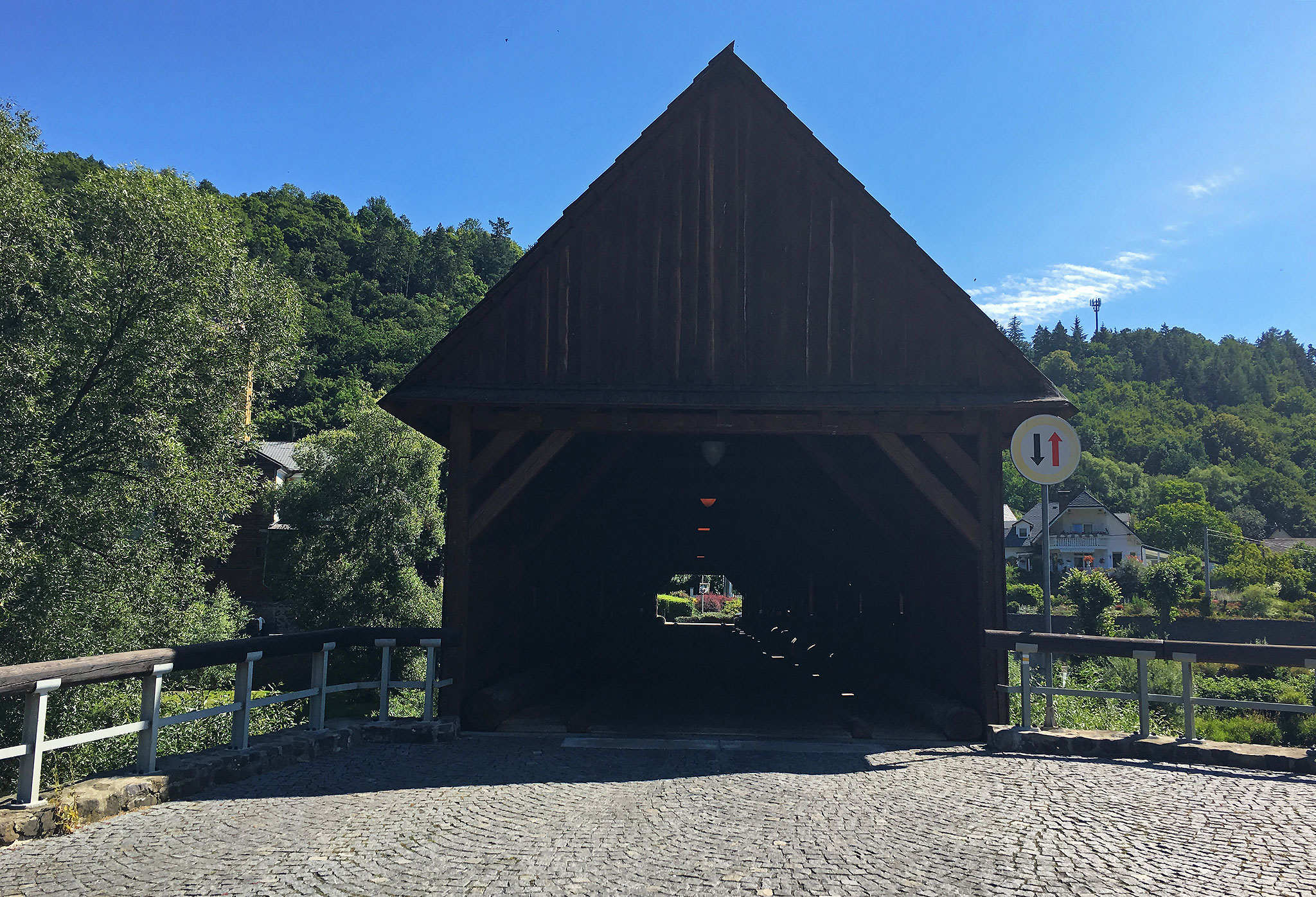 I chose (the usual) routes leading through countryside, villages, woods and farmlands.  West of Oberwiesenthal I crossed over into Germany, but hardly noticed. Was on a tiny little road that led through some woods. Because of that I didn’t see any border signs.

I stayed on the German side a while, then crossed the border again and continued in direction of Chomutov. On the way I passed through a village where I spotted an interesting looking church building. 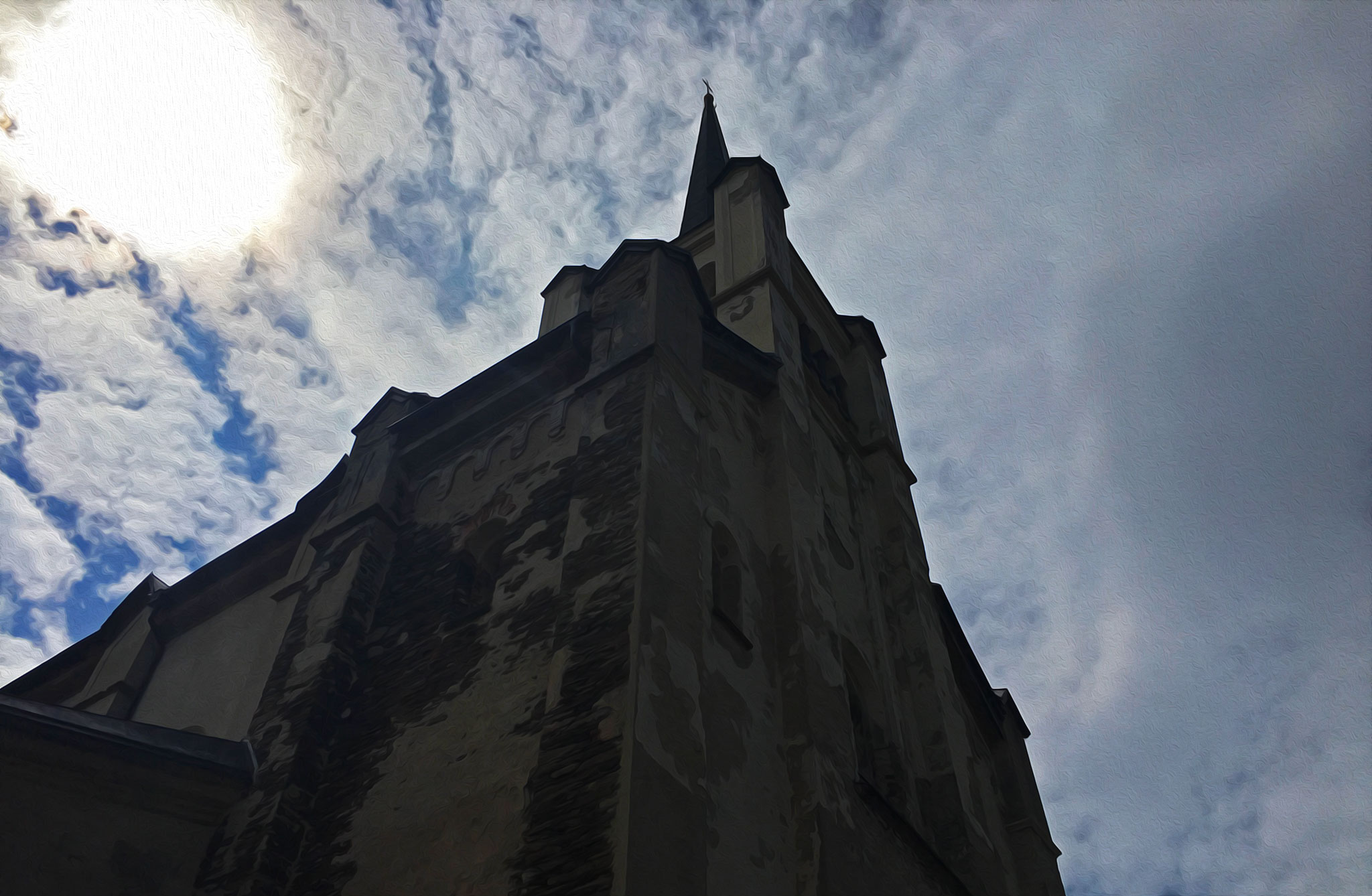 Kostel svatého Václava from the 15th century, in the village of Výsluní

Turned out to be a restoration project funded by EU. From the looks of it on the inside a pretty comprehensive job! 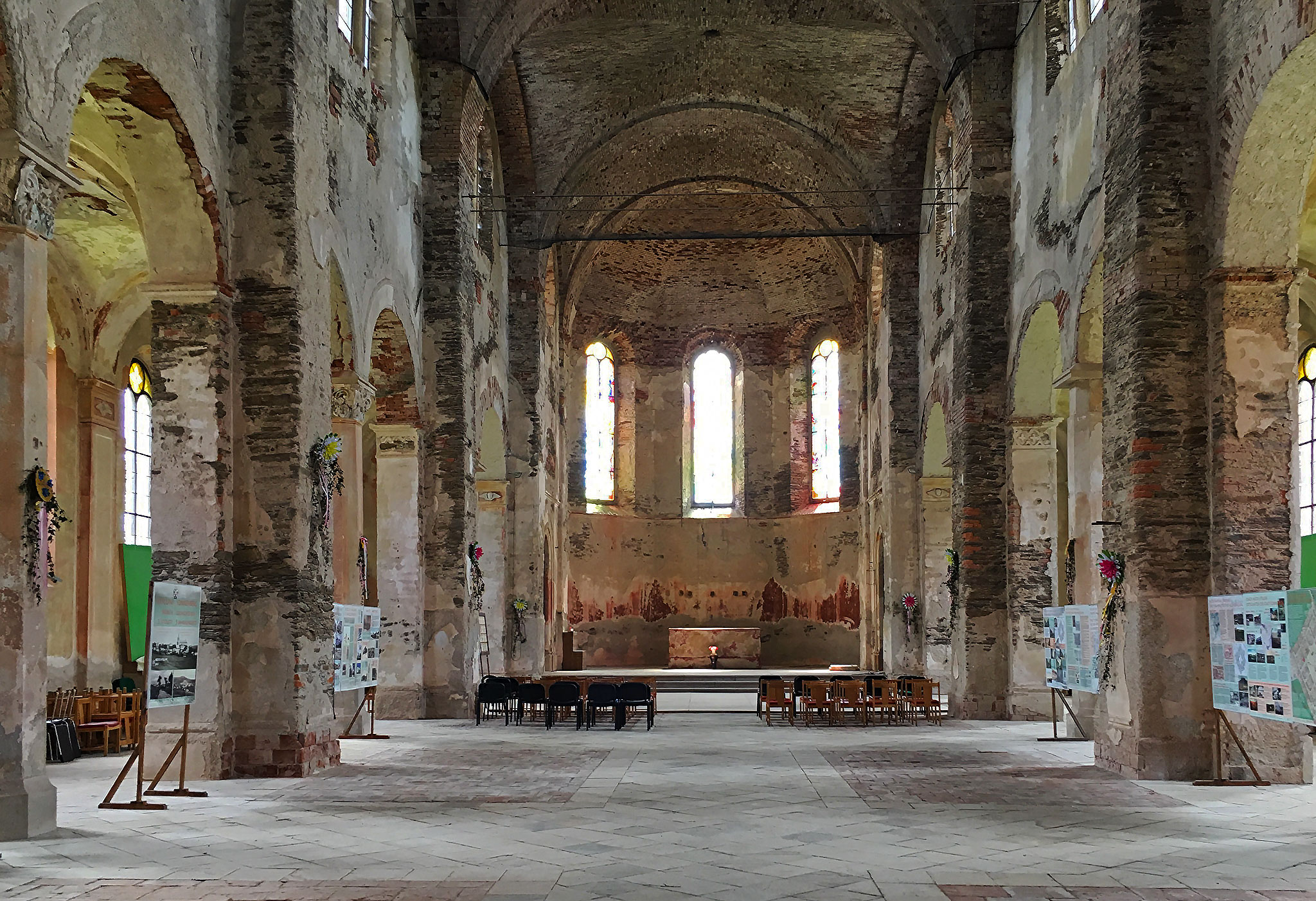 From Výsluní I passed through Chomutov and stayed on a north-eastern course.

It was sort of a goal. Entered the park on a tiny narrow road with mountains and forests on either side. The first thing I noticed was some peculiar looking sandstone based rock formations. 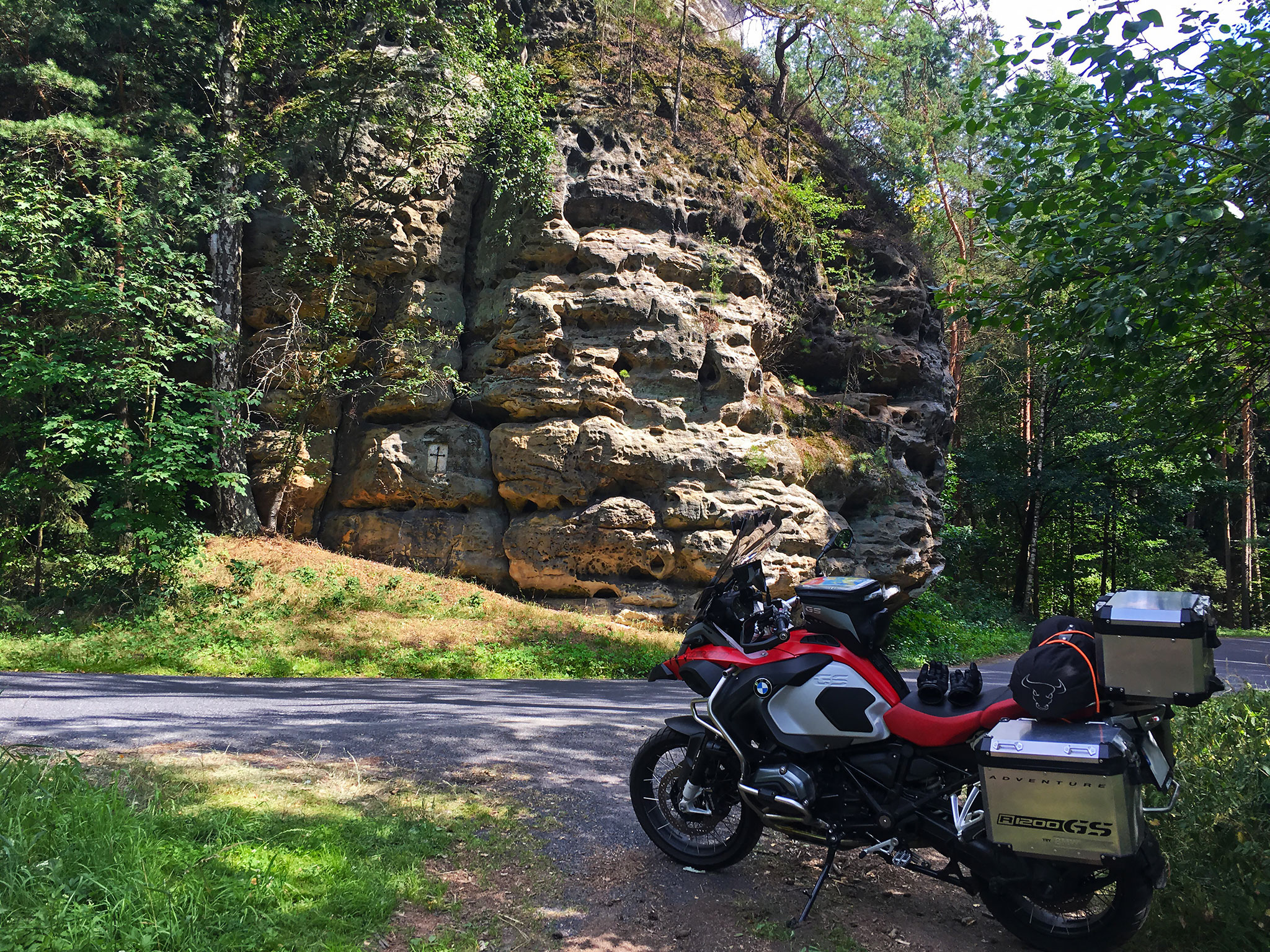 The dense woods combined with the rock formations created somewhat of a MiddleEarth like atmosphere. It soon became clear to me why this is a popular park for hiking and recreation.

Coming through here in July you have to be prepared for packed hotels and lots of people. if you go here in this time of the year, book in advance!

Next time around I will make a stop in late June, before the Czechs begin their vacation. 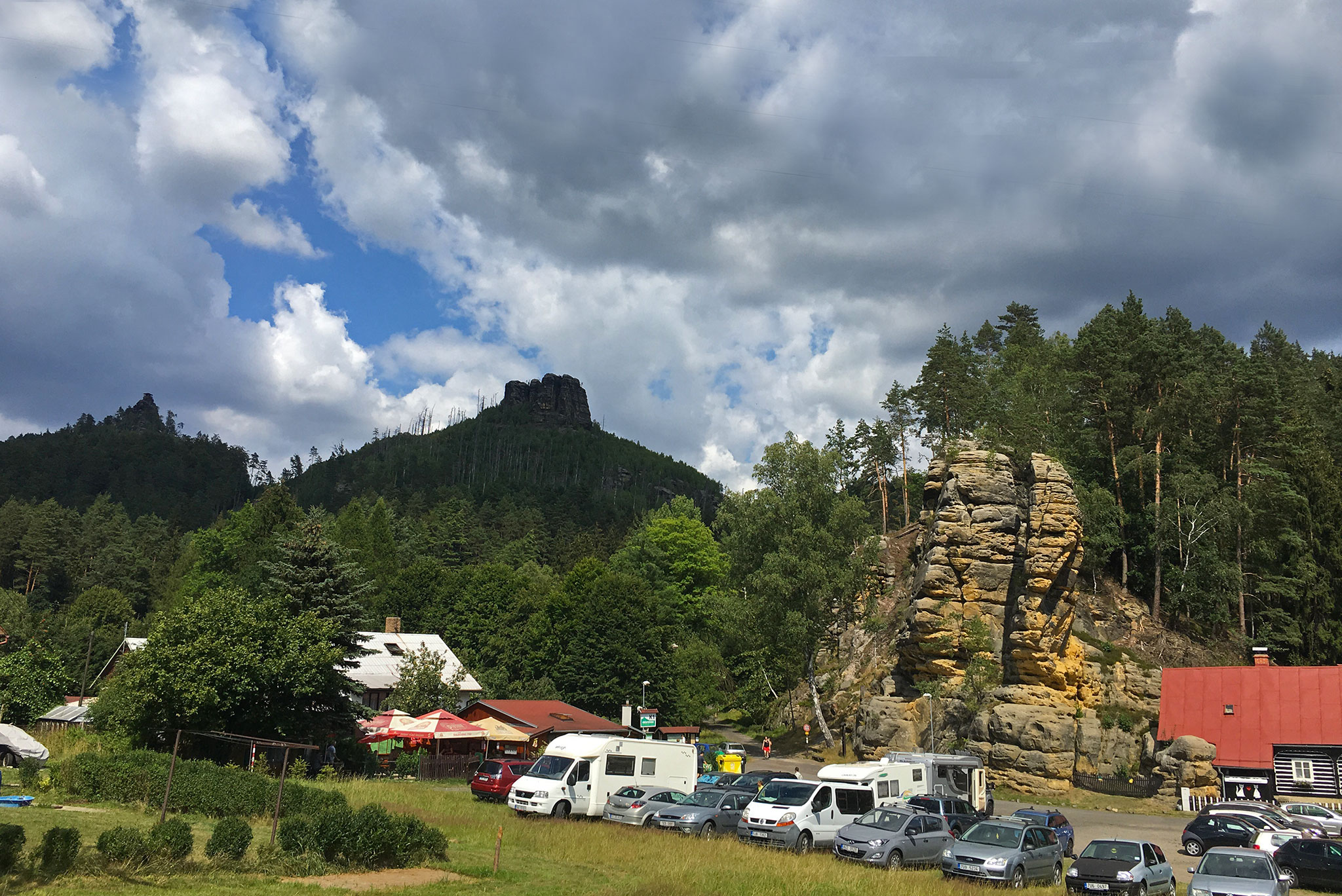 Packed with people and cars in the Bohemian Switzerland National Park

Around the north east side of the national park I continued north and into Germany. Made a short stop in the city of Bautzen for a coffee. Since I had not made any decision about where to stay I asked a waiter for tips. He suggested some place names, and mentioned a natural reserve, slash park, some miles north. 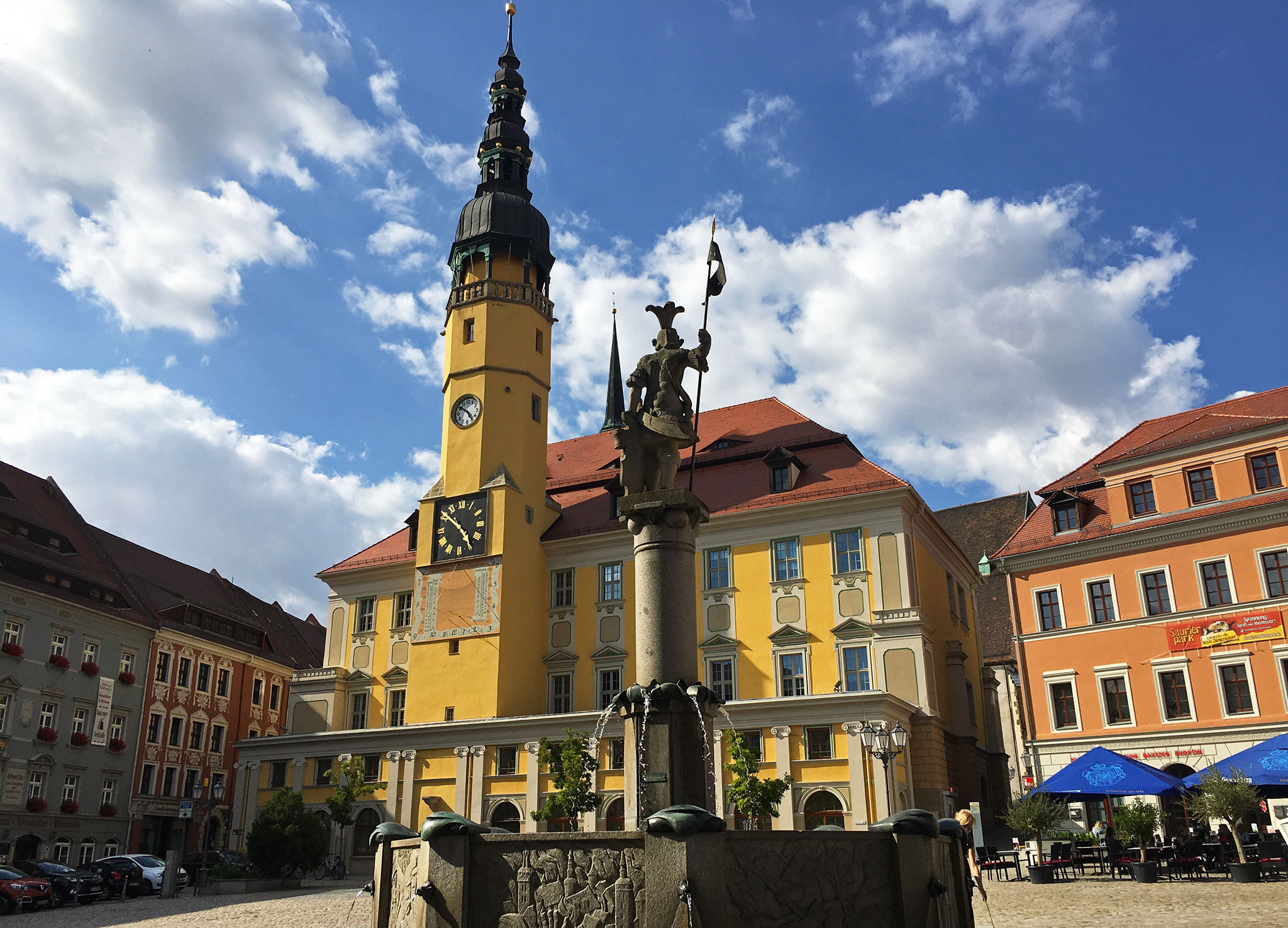 That sounded like a good tip, it was on my course north so I decided to check it out.

The geography was getting into the flat, which isn’t my favorite. I like mountains, hills and variations, perhaps not so strange considering I am a Norwegian. But this is a pretty region, with scattered lakes, woods and water canals.  Apparently a recreation area for Germans living in this part of the country.

It was getting into early evening so I made a hotel reservation in the city of Lübbenau via booking.com. 80 Euros with breakfast in high season wasn’t too bad. Safe parking for motorcycles in a back yard was a big plus. I don’t like parking in the streets if I can help it.

A late outdoor dinner plus a beer or two later I decided another 10-11 hour adventurous day had been a success. 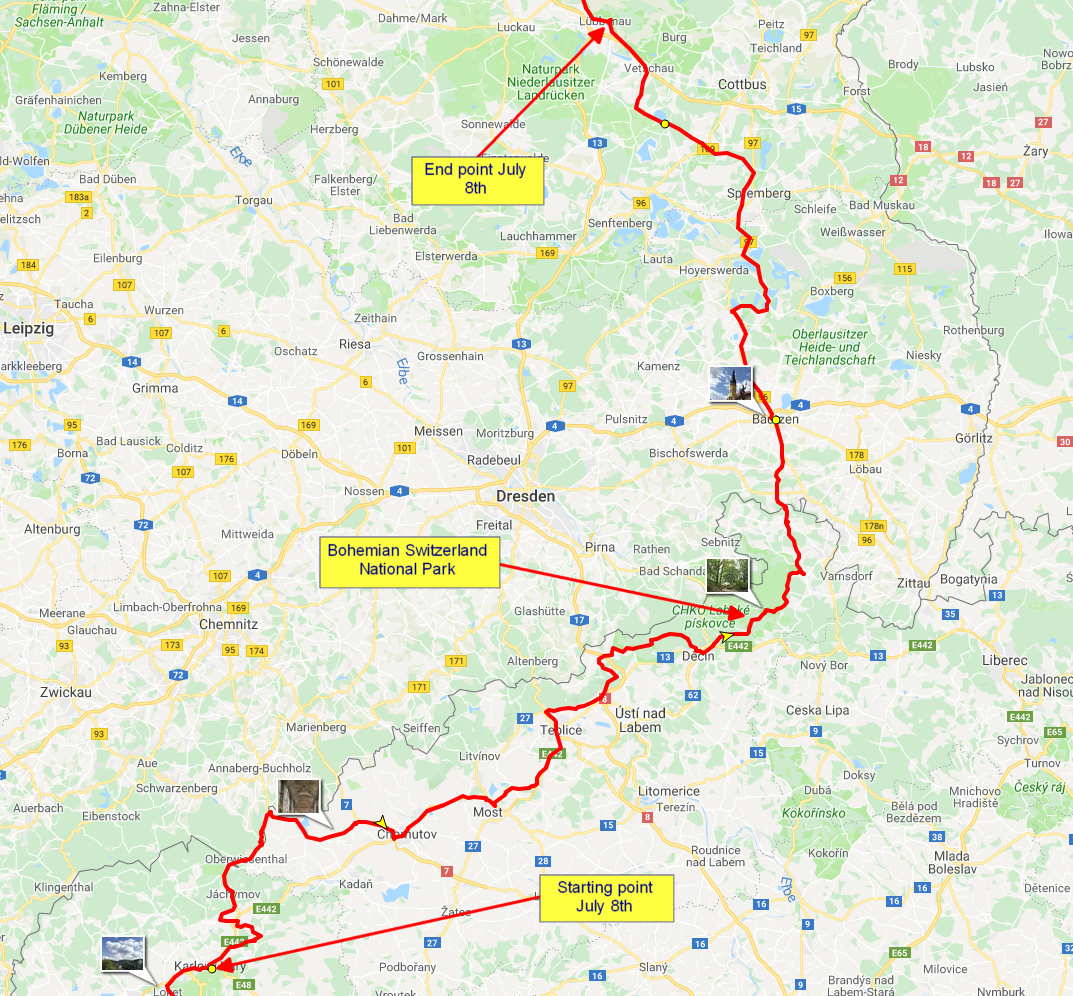 The route from Karlovy Vary to Spreewald in Germany

July the 9th 2018 I’ll not remember fondly. At least not the first part of the day. The riding was alright, the weather was good but something else annoyed me greatly. You’d think, when having done thousands of kilometers across Europe, I’d learned about GPS usage and how to deal with navigation in general.

Apparently not. Berlin was on my trajectory but I had every intention of avoiding it, plus large city traffic. The idea was to get on a main road and ride around or outside Berlin. This failed completely because I forgot to change the mode of my GPS.

Too late I discovered my blunder. Now the shortest route was to ride along one of the ring roads, and then out on the north side. Suffice to say, it was not fun. I’d love to get to see more of Berlin, but not on a motorcycle!

After what felt like an eternity, and a plethora of intersections and traffic lights I made it out of Berlin metropolitan area. Then continued north to Rostock, and took the ferry over to Denmark. Two and half hours on the freeway later I landed in Skåne and stayed overnight at a friend’s place.

The next and last leg was more or less a replay of the year before. But with some variations. Though like in 2017 I intended to avoid Gothenburg and ride as much as possible on smaller roads.

North of Helsingborg I turned east and rode some miles on really small roads.  Found some gravel and dirt roads which was rather welcoming after umpteen tarmac miles in Germany. 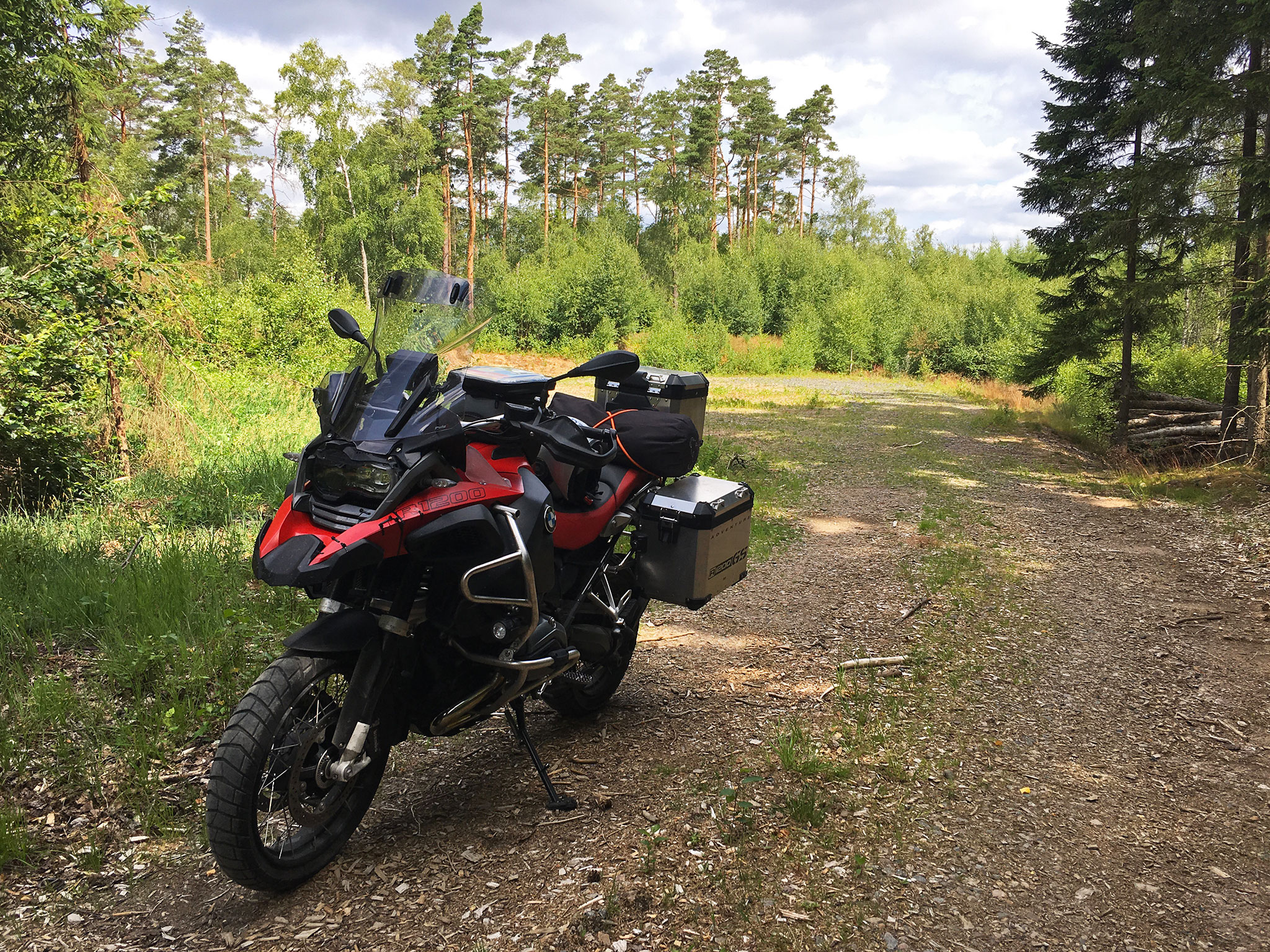 Good to be back on Swedish gravel & dirt roads

If you like nature, ride offroad or on gravel, forest and mountain roads with no pavement, then Scandinavia is your region. I frequently go into Sweden for gravel roads, they have a huge, well maintained network all across the country.

I continued north, turning a bit west in direction of Trollhättan, the city where SAAB was produced.  Unlike last year I stayed on a straight north course. Wanted to cross over into Norway a different way.

In the little city Ed I stopped for a quick dinner. Afternoon had become evening but with beautiful summer’s weather temperature hovered between 26-28C.

From Ed there’s a pretty scenic back road towards Norway. It runs through to Nössemark, along the lake Stora Le. Good thing it was still light out. The road had the worst tarmac, gravel and oil smearing I’ve seen in a long time.

Both in Norway and Sweden they fill the edge of the road with gravel. This is really bad news, because trucks and trailers drags the gravel into the road.  Gravel on top of fresh tarmac, especially in twists and turns = bad news for motorcycle riders. There was little else to do than to take it VERY calmly.

Still, I recommend the route if you come from Sweden. Or for that matter, ride from Oslo and south. 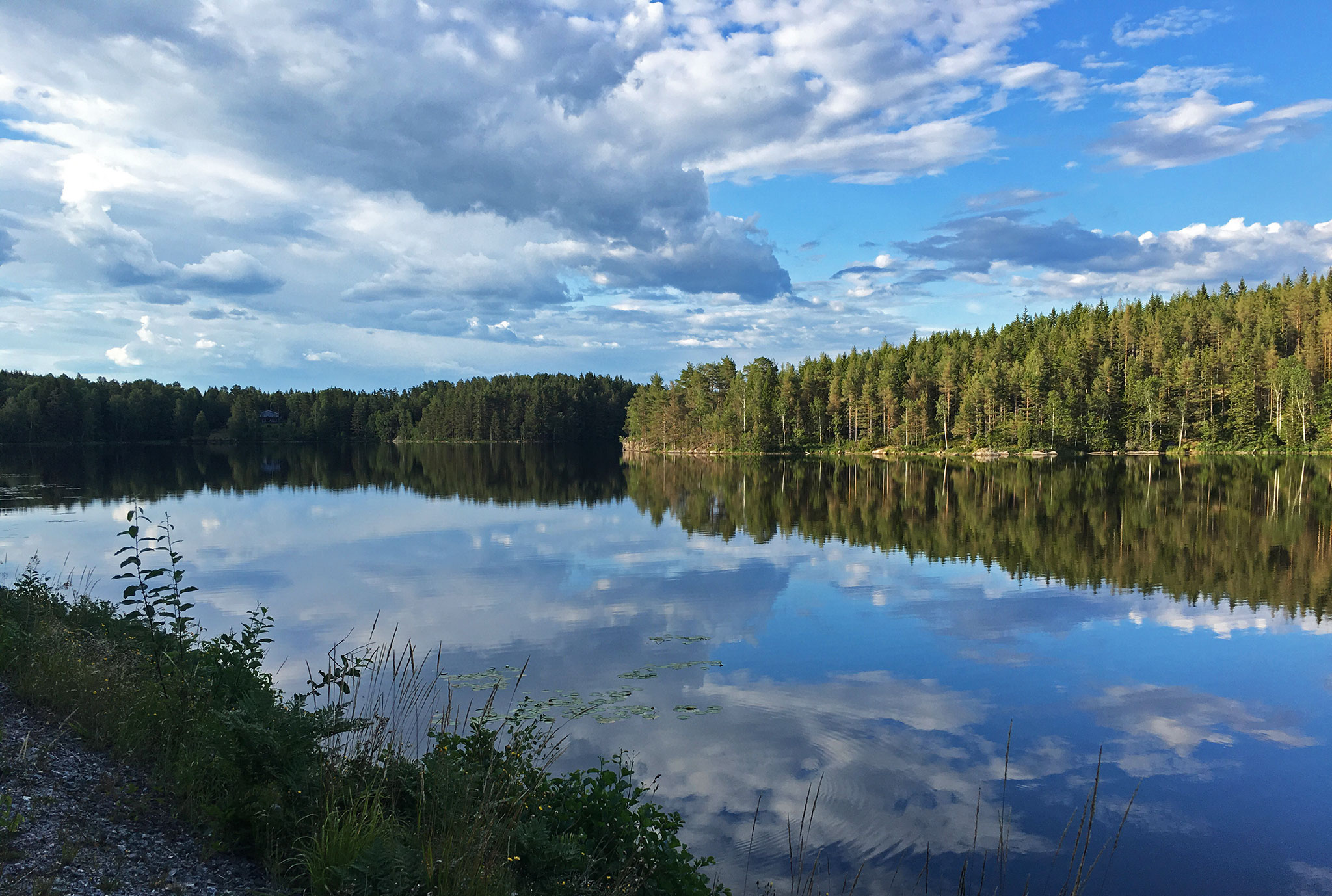 Lots of lakes in the region close to the Norwegian border

A little  later I crossed the border over to Norway, stayed on small roads for another hour or so. This part of Norway is pretty flat but has its charm. 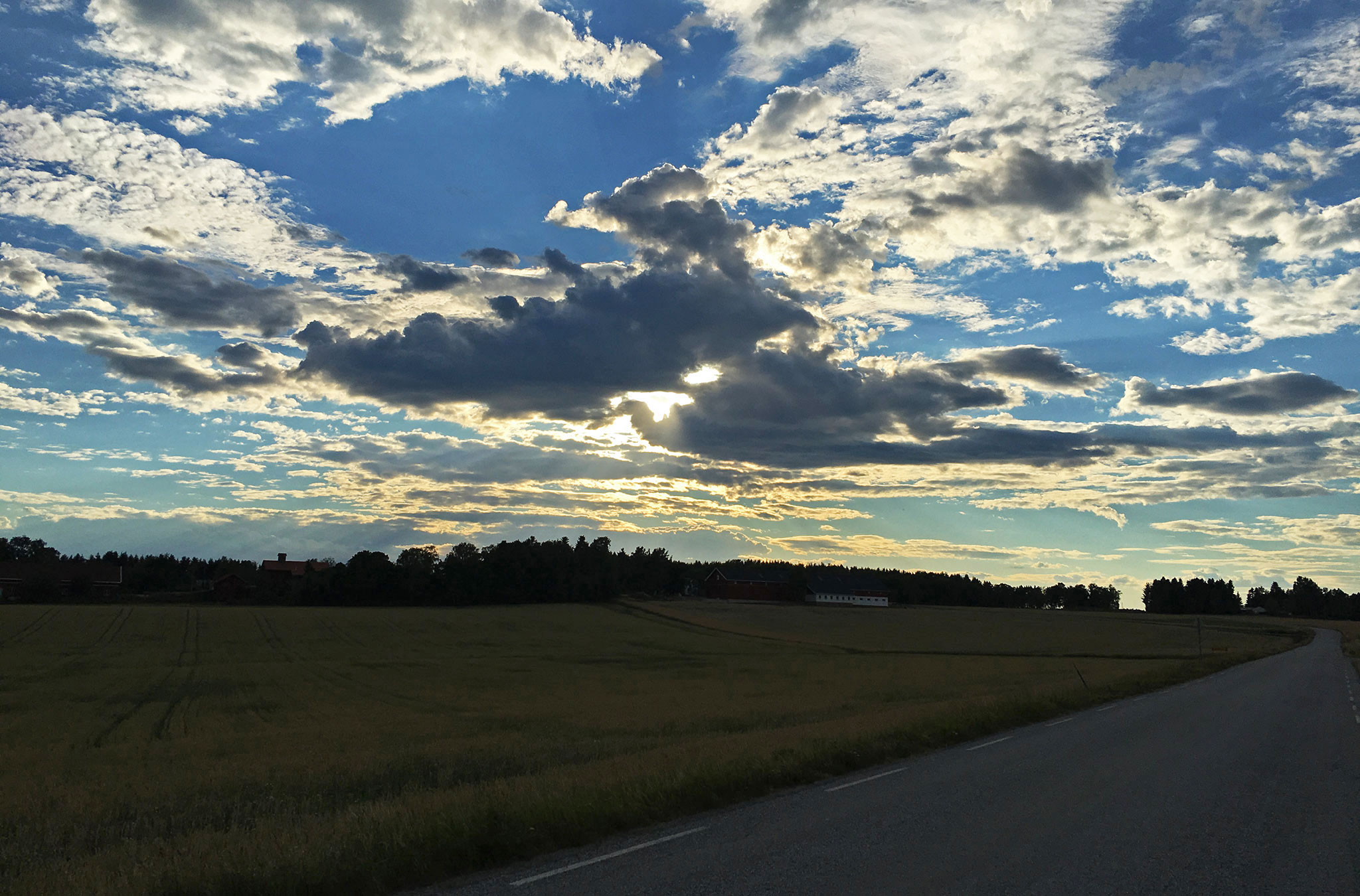 Then took the freeway into Oslo to save time. Soon the last leg came to an end, which turned out to be 11+ hours straight. It was good to be home.

The motorcycle adventure of 2018 was the third in a row. Looking back it seems I’ve found a pace that works. Both with regards to riding days, off-riding days and travel distance.

Additionally, and as usual I met lots of nice people. Became friends with some of them and our paths may very well cross one day in the not too distant future.

The day after return home I unpacked and washed the motorcycle. Both the auxiliary lights and headlight went dead and would not come back on again. Riding without lights is a no no.

Good thing I have another motorcycle. One week later the beemer was left at my dealers workshop. That was the last I saw of it in 2018. September they started damage assessment and work. Turned out the incident in Germany had caused much more damage than BMW Motorrad in Hannover had been able to discover.

At the time of writing this it’s later January 2019. Mid-month I got a mail from my dealer. They informed me the Beemer was ready and had passed its second MOT. The motorcycle has been completely taken apart and rebuilt, with new main frame, an entire new front, stanchion, telelever (suspension) dash, headlight and a million other parts.

It will be as good as new, almost.  The only main parts left from before the rebuild were engine, crankshaft, and rear wheel. Structurally it’s brand new. Fall 2018 I was thinking about trading it in once rebuilt. Now I’ve changed my mind. Come spring and summer it’s very likely I once again will be heading down south, on new adventures.

But that will be another tale, and another series of blog posts.

If you came in via this page, the 2018 adventure begins here.