Karlovy Vary, aka Karlsbad in German, might not be the most beautiful or interesting city in Europe. But it does have qualities, and is worth a visit.

Karlovy Vary has both a long and interesting history. A spa town of old but that’s far from all worth mentioning. Best to leave the history lesson to wiki,  go here for details.

Having installed myself at the hotel, switched to shorts and sandals twas time go for a walk, some food and drinks. Originally I’d thought just to stay just for one night but on impulse, while passing  through the reception hall, decided to query for one more night.

Weather was great forecast ditto, I’d found a good spa hotel with swimming pool, and was in no rush to get home. Got a good deal on two nights so done deal! 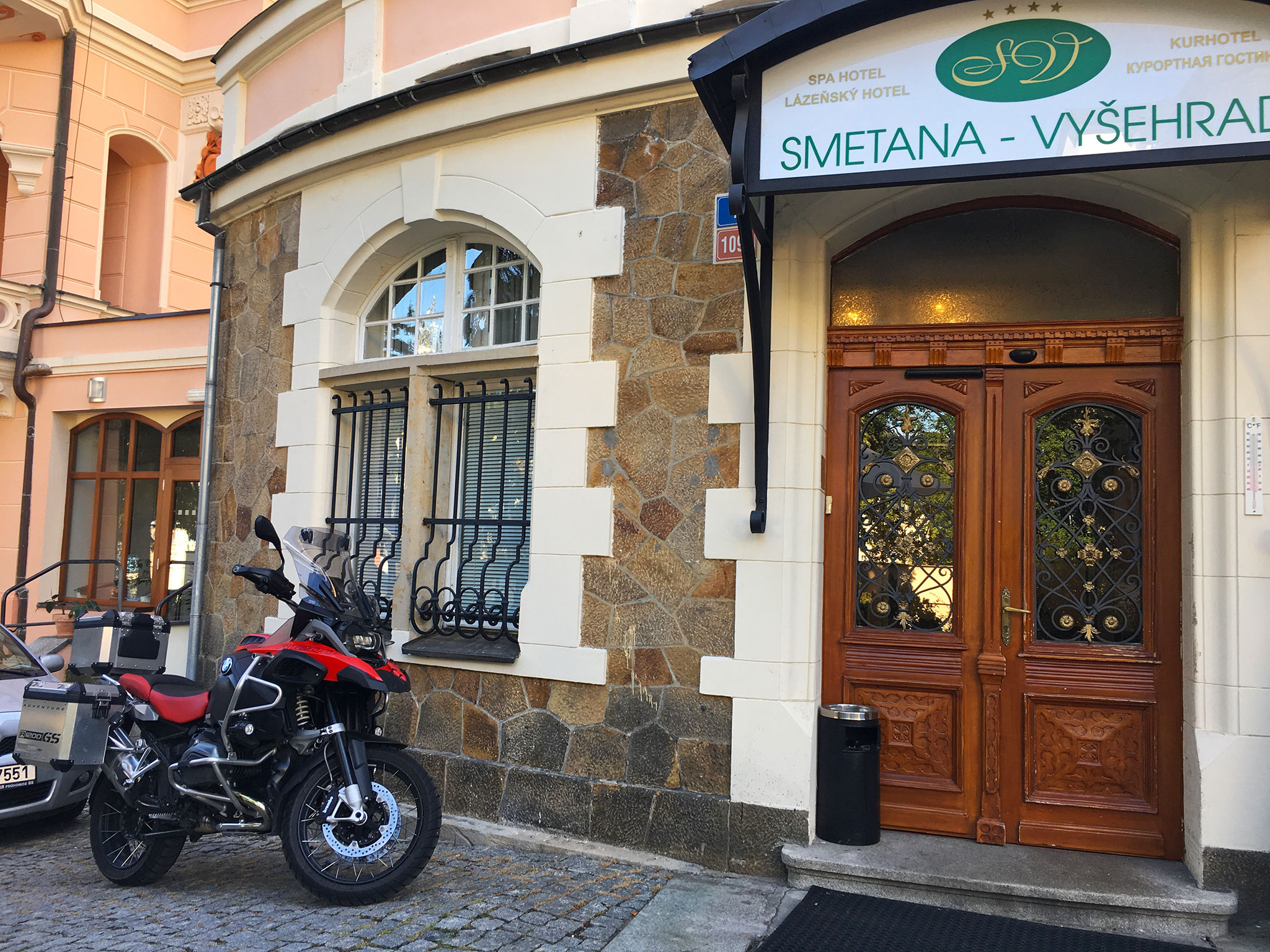 Lazensky Hotel Smetana, if back I’ll choose this hotel again!

Walking down to the old town was a 10-15 minutes stroll downhill. It felt good to stretch and flex muscles. I don’t have any issues with spending 10-12+ hours in the saddle. One reason is that on GS Adventure i can ride stand riding. Good for posture, knees, back, muscles stretch and relief. 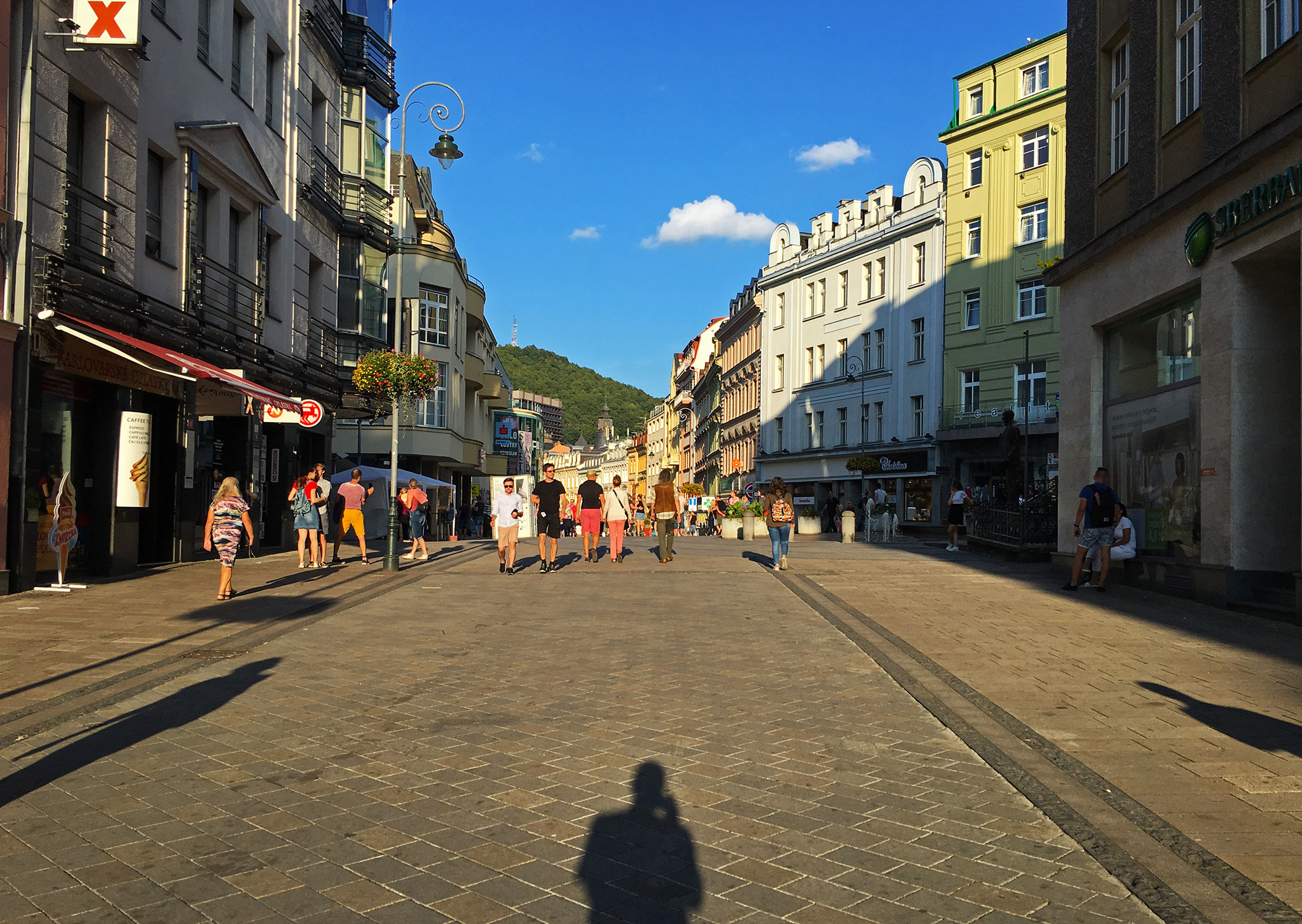 Underway to the old city center in Karlovy Vary

However, despite riding comfort few things can match evening walks in new surroundings. Very much a part of my summer adventures. The layout of Karlovy Vary old town was a direct invite to pedestrian explorations as well. 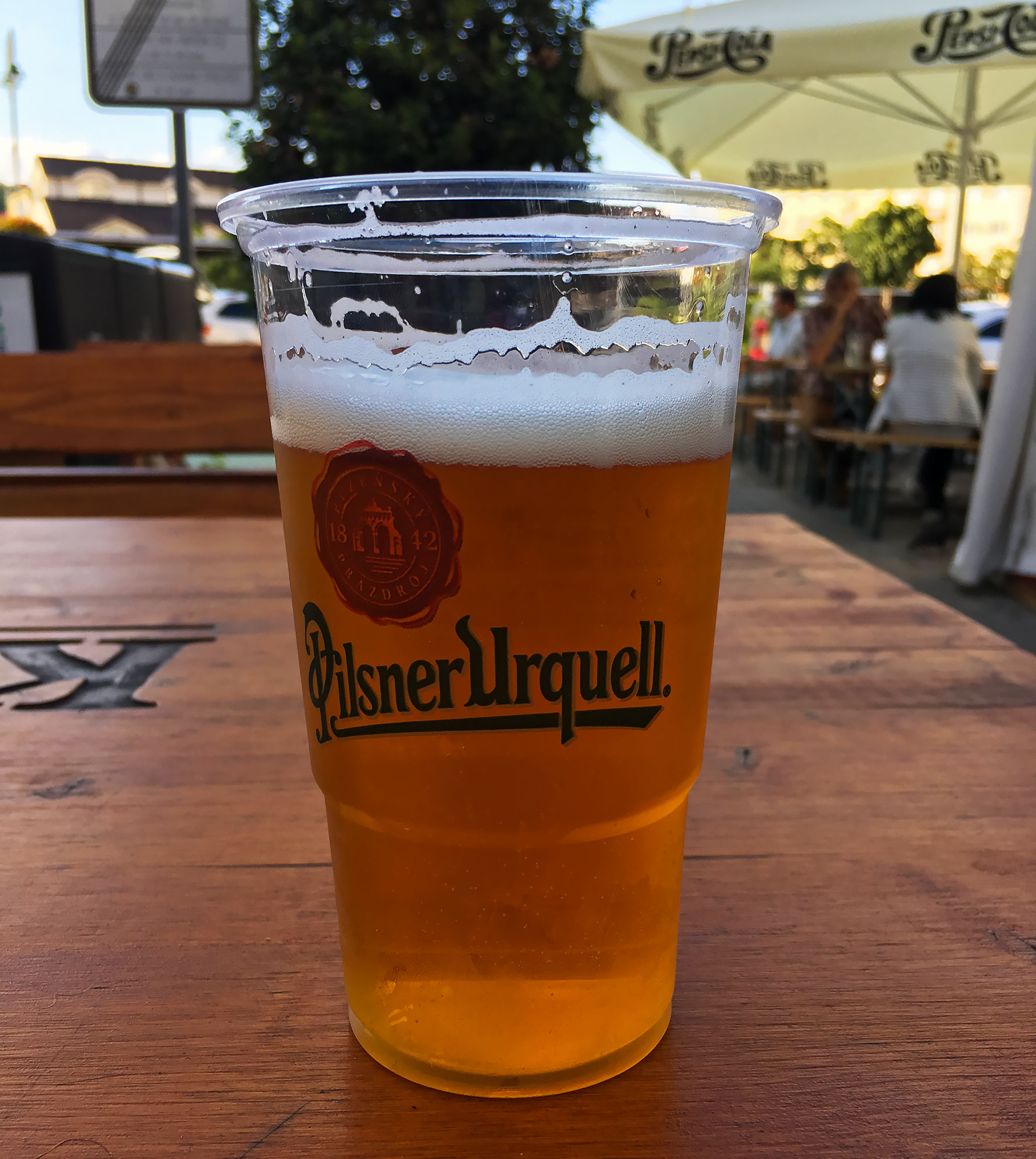 Pilsner Urquell, if you’ve not tasted it, try!

Soon I found a outdoor waterhole, slash tent, and had my first taste of Czech lager. After a long day’s worth of riding don’t think I need to go into details on how good that tasted!

I’ve always appreciated Czech beer, of various sorts. There’s something special about the taste, and in Czech Republic beer making is an art form.

The word Pilsner, derived from the the Czech city of Plzeň (Pilsen), denotes a light, or if you like, blond type of beer. It was first produced in 1842.

But beer production started in Pilsen already around 1295, and I believe that in itself commands some authority in the art of beer making.

Pilsner Urquell, one of the most well known breweries, still produces beer in Pilsen.

Failed to mention I’d actually been through the city of Pilsen earlier in the day. Thought about making a stop but just blazed through. Will consider it for later.

After a bite I drifted into the old town. where I find beer and food tents along streets, packed with people. Street bands, stands of all kinds, looked like some kind of festival was going on! 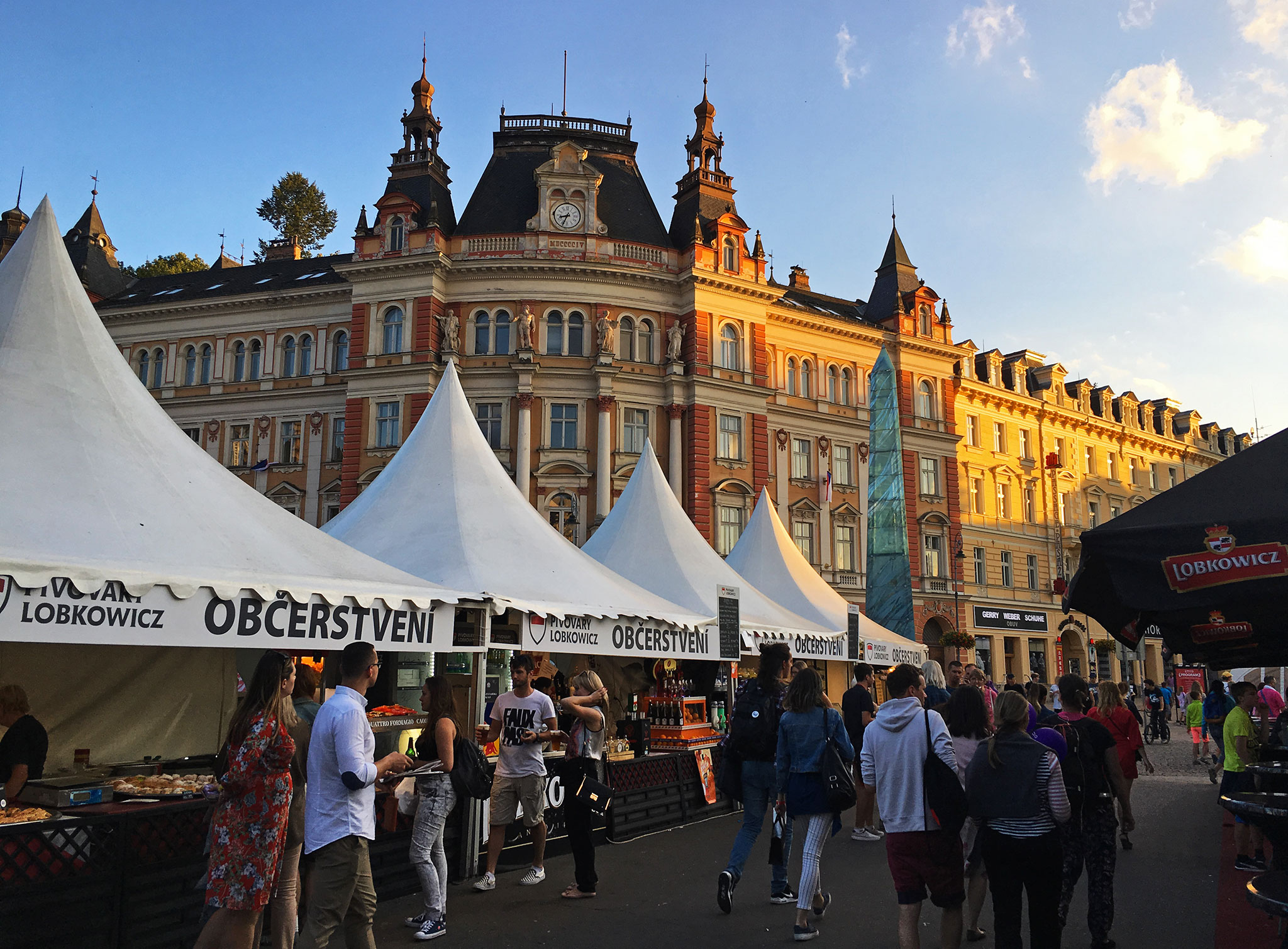 In Karlovy Vary, beer and food tents all over

Indeed there was. Further up into the old town, along the river Tepla the density of tents and people continued to rise. There up on a building a huge sign saying Karlovy Vary International Film Festival. Arranged for the 53rd time in 2018.

I am not especially into movies, much less eastern European. But this film festival turned out to be a pretty big thing.  A fleet of shining large BMWs went past with dark screens. Apparently shuttling VIPs to and from theaters and hotels. 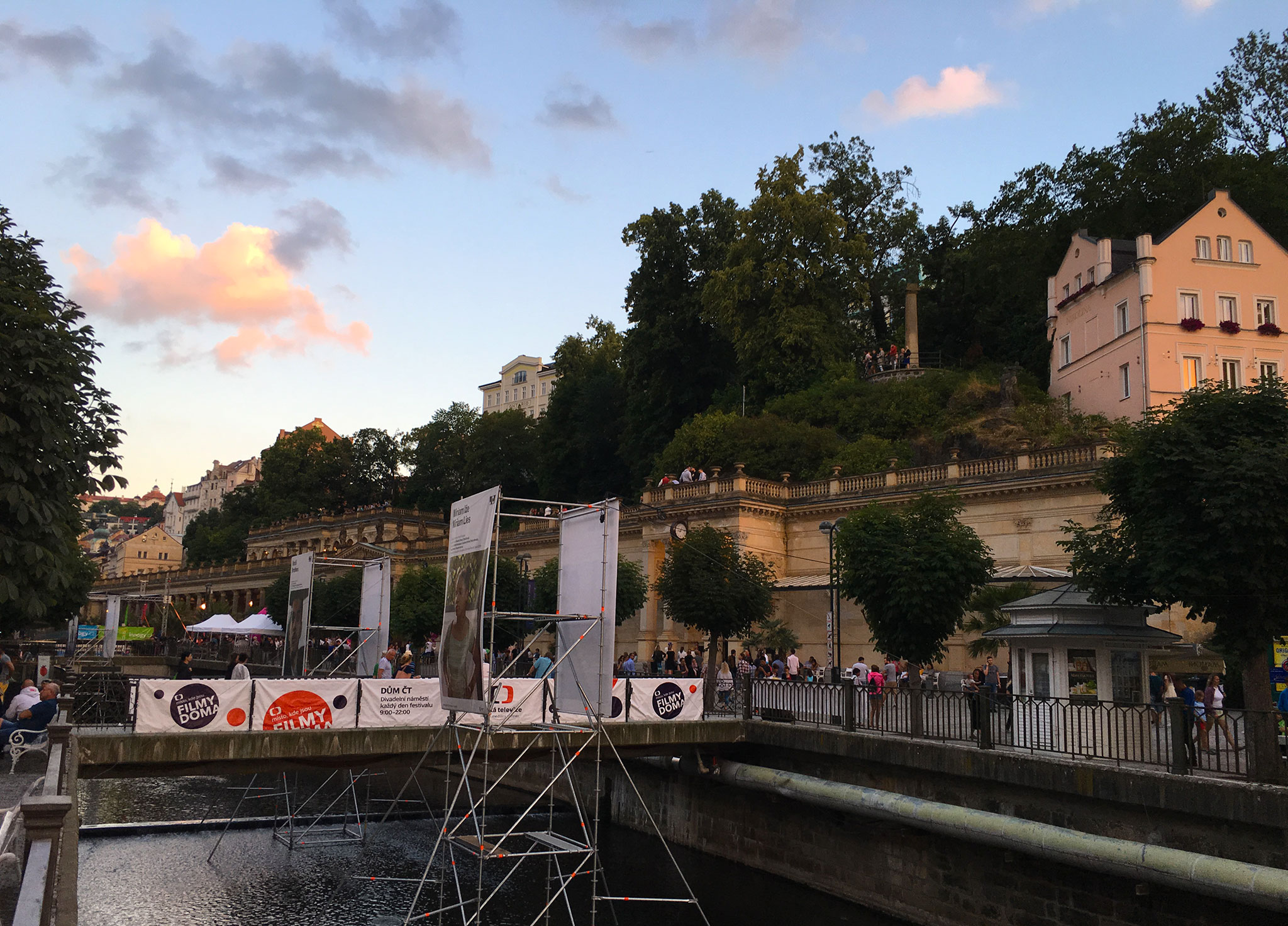 Along the river Tepla in old town Karlovy Vary

Surprises is what I love about non-planned adventures. A major part is NOT knowing what’s next, not having ironed out details. The expression to “wing it” pretty much describes how I like vacations. 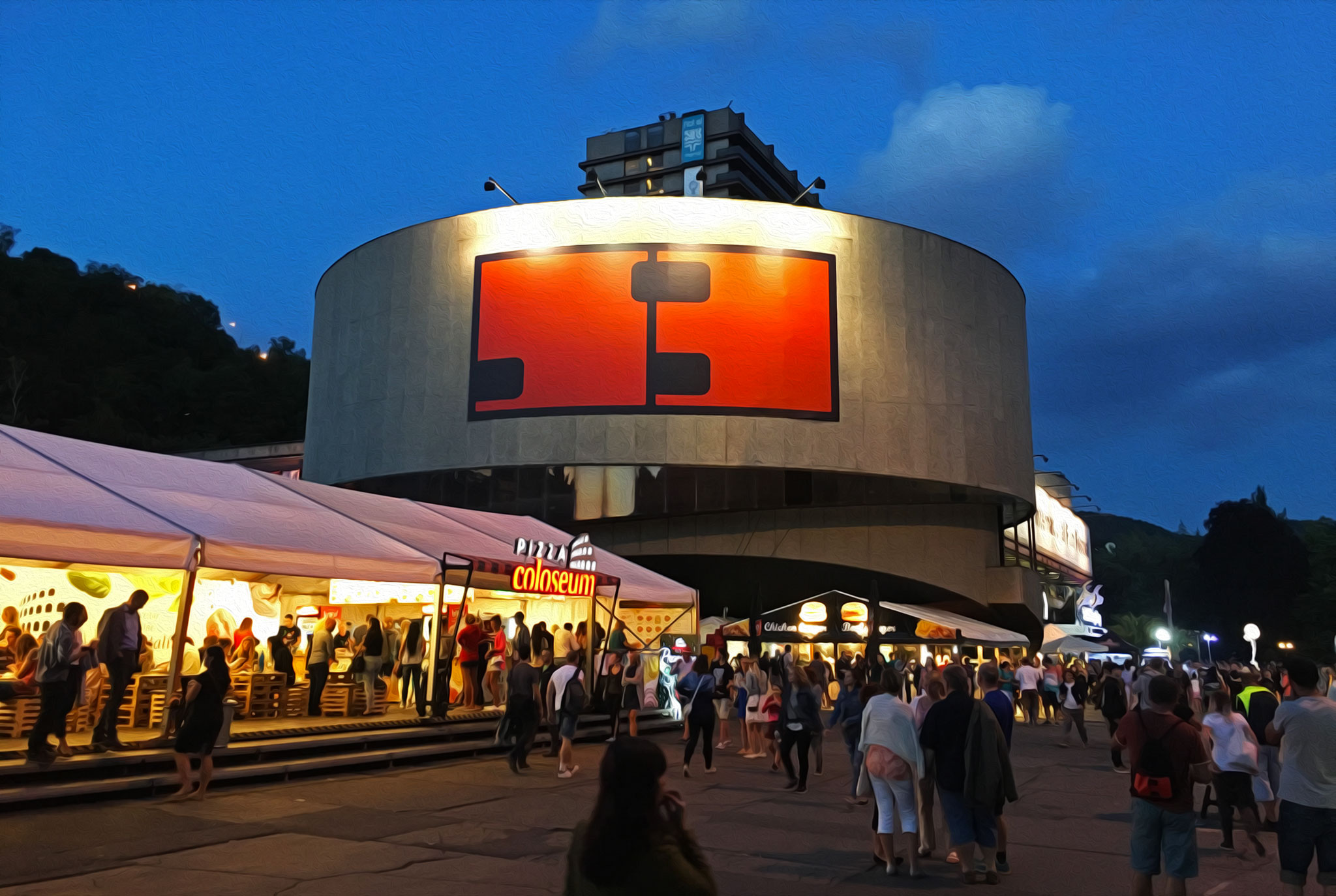 With darkness slowly descending on the old town more and more people where out in the streets. live performances on several outdoor stages. All a very Czech experience, they sang on Czech, they spoke Czech of which I understood squat, but it didn’t matter.

Tipsy, tired and happy I retreated to the hotel later in the evening. Found a stair case up to my street which saved me a long walk around.

Woke up to sunshine outside, had a good breakfast, fired up the apostles horses, then out to explore the city. 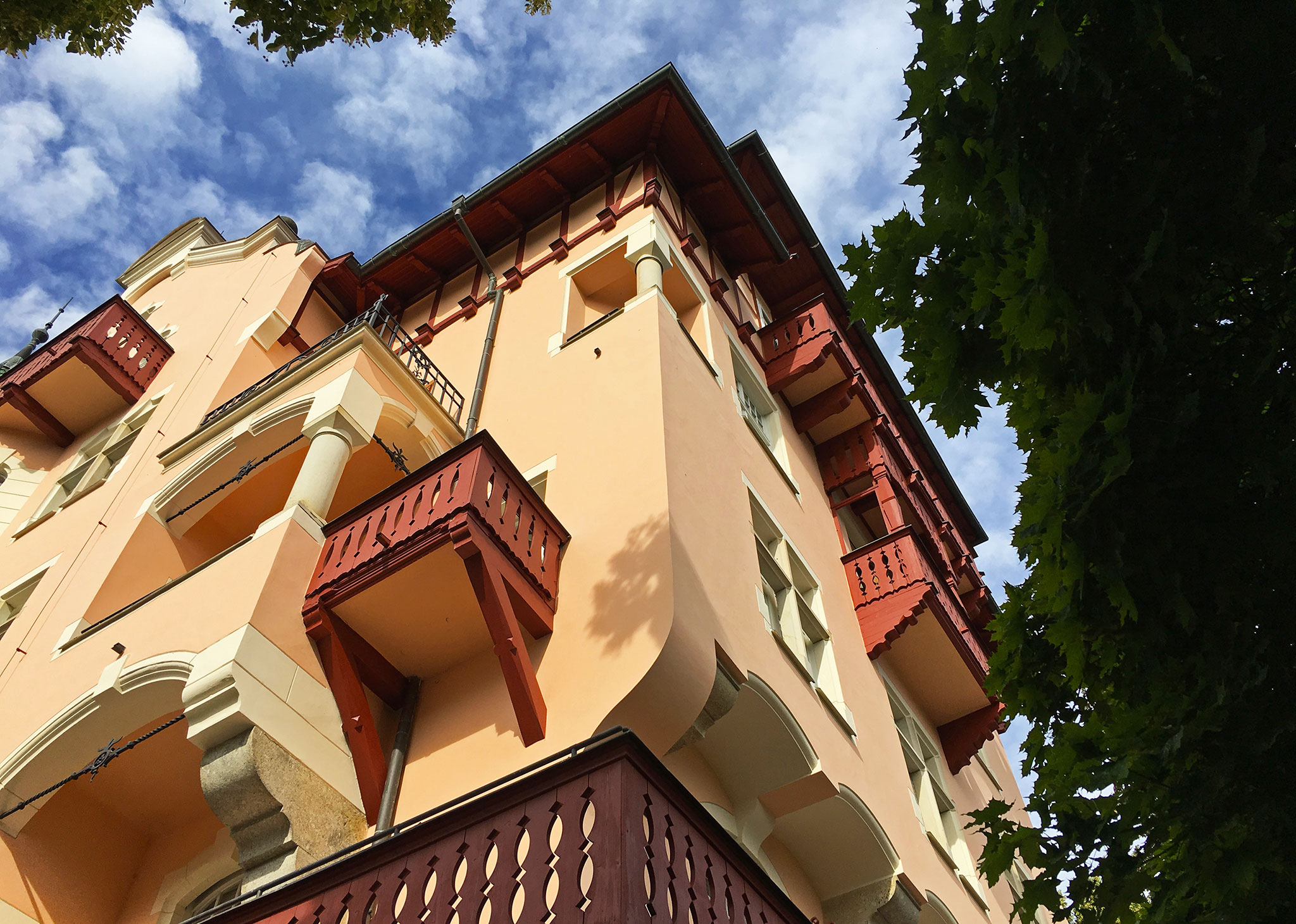 The architecture in Karlovy Vary, at least in the part of the city I was, speaks clearly of wealth, of prominence and importance. Throughout the whole town care for design, heritage and history is clear for everyone to see and appreciate. 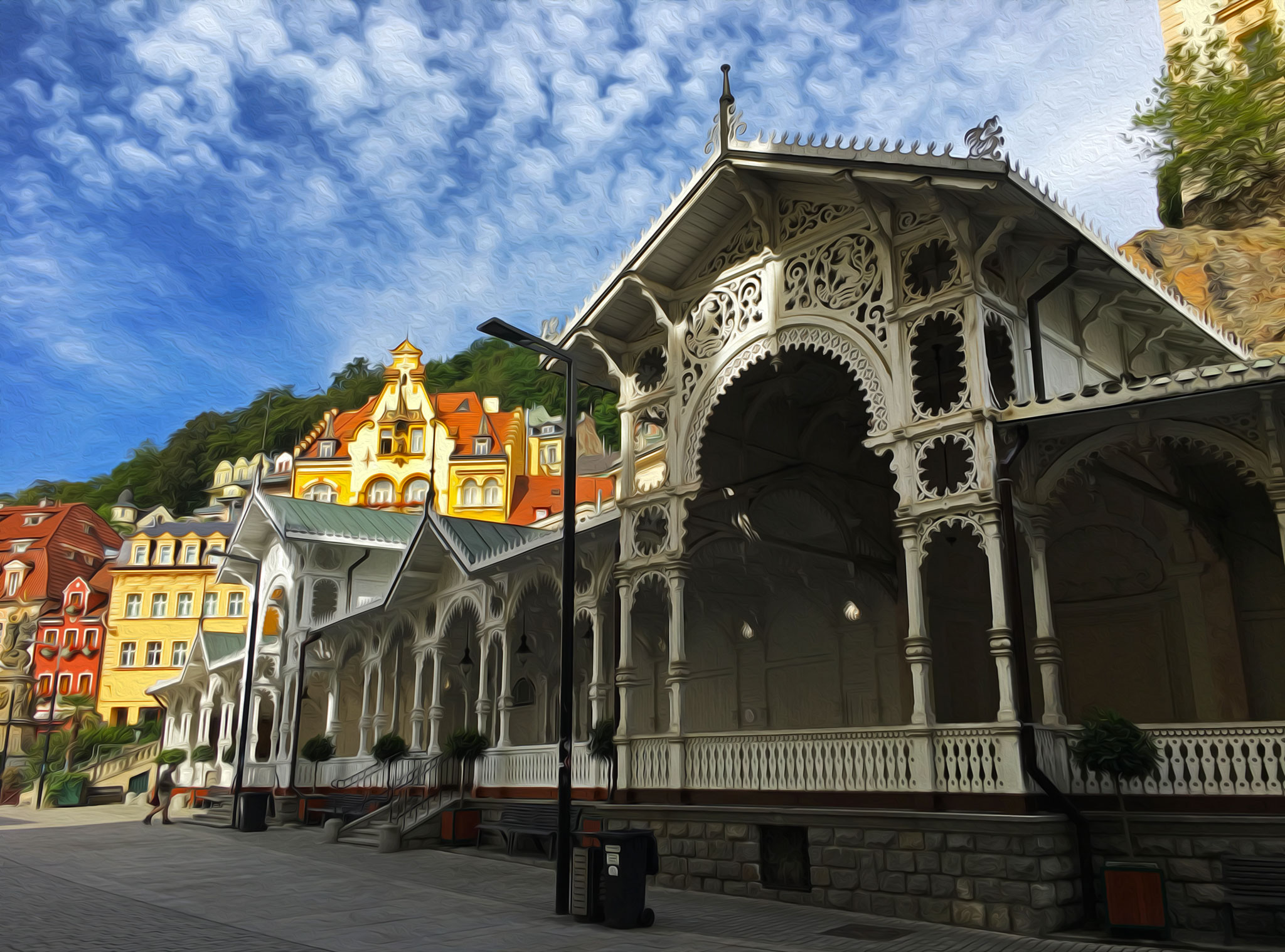 Most of the interesting building sits on either side of the river Tepla, and up in the hillsides. Topography and surrounding dense woods contributes to a narrow, cozy town atmosphere. 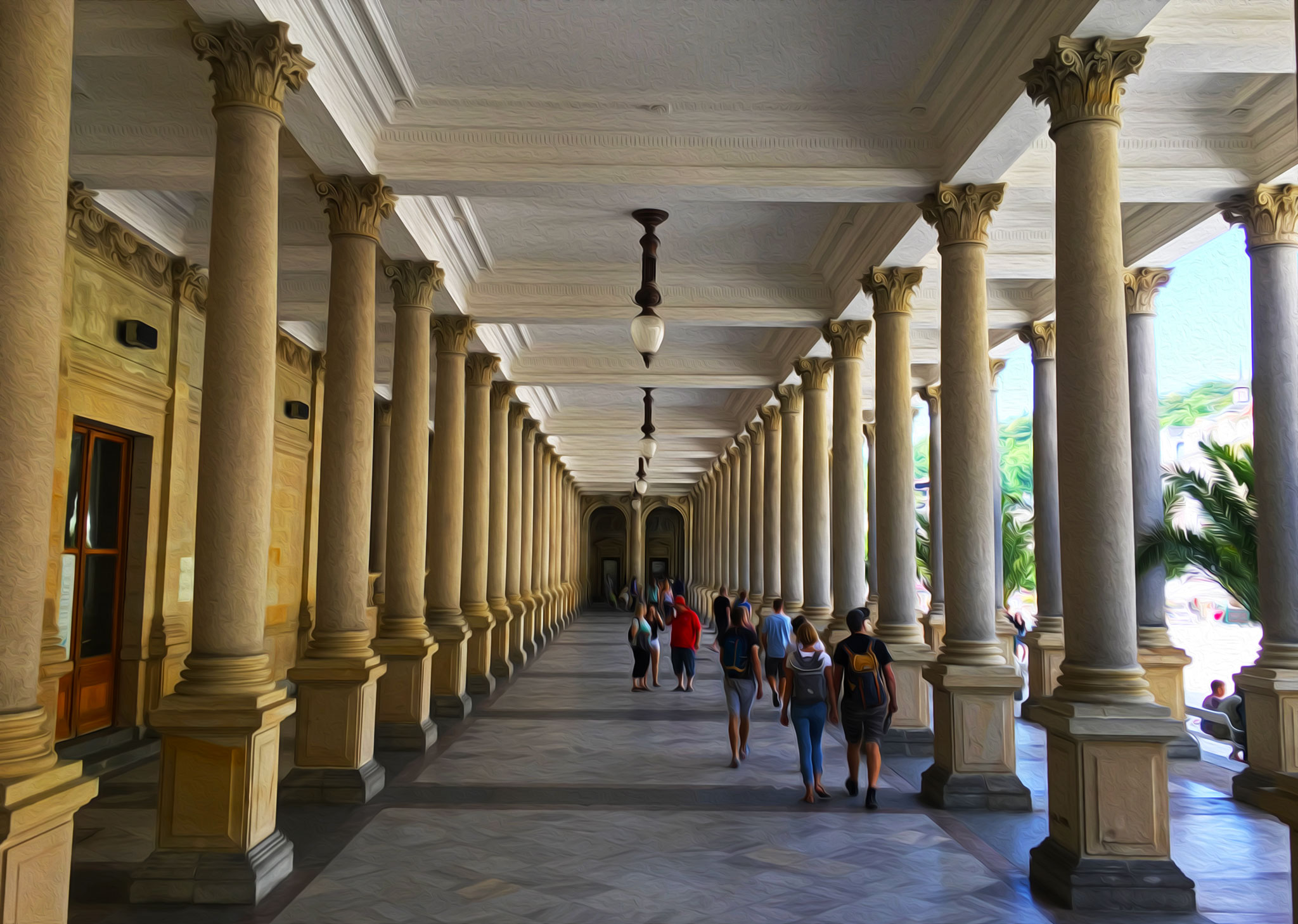 You don’t need any other means of transport here than feet and legs. Pretty perfect town for a wafting about in slow motion, literally speaking and, as it would turn out, learn a little about the country.

Because of the film festival there were lots of people roaming the streets.  And outdoor places to stop for a drink,a coffee or a bite. At one such place I got into talking with a Czech couple, in town for the occasion.

Last time I’d been in the country was right after the fall of the iron carpet. Or if you please, in and during the somewhat chaotic surges of the Glasnost waves. At the time the country was Czechoslovakia, e.g. with Slovakia.

Now having a chance to talk to a couple old enough to have been trough the various political stage of the country. Genuinely interested I listened, ask questions and learned a few things not previously known. I departed from the nice couple, with new knowledge, and continued my ad-hoc excursion. 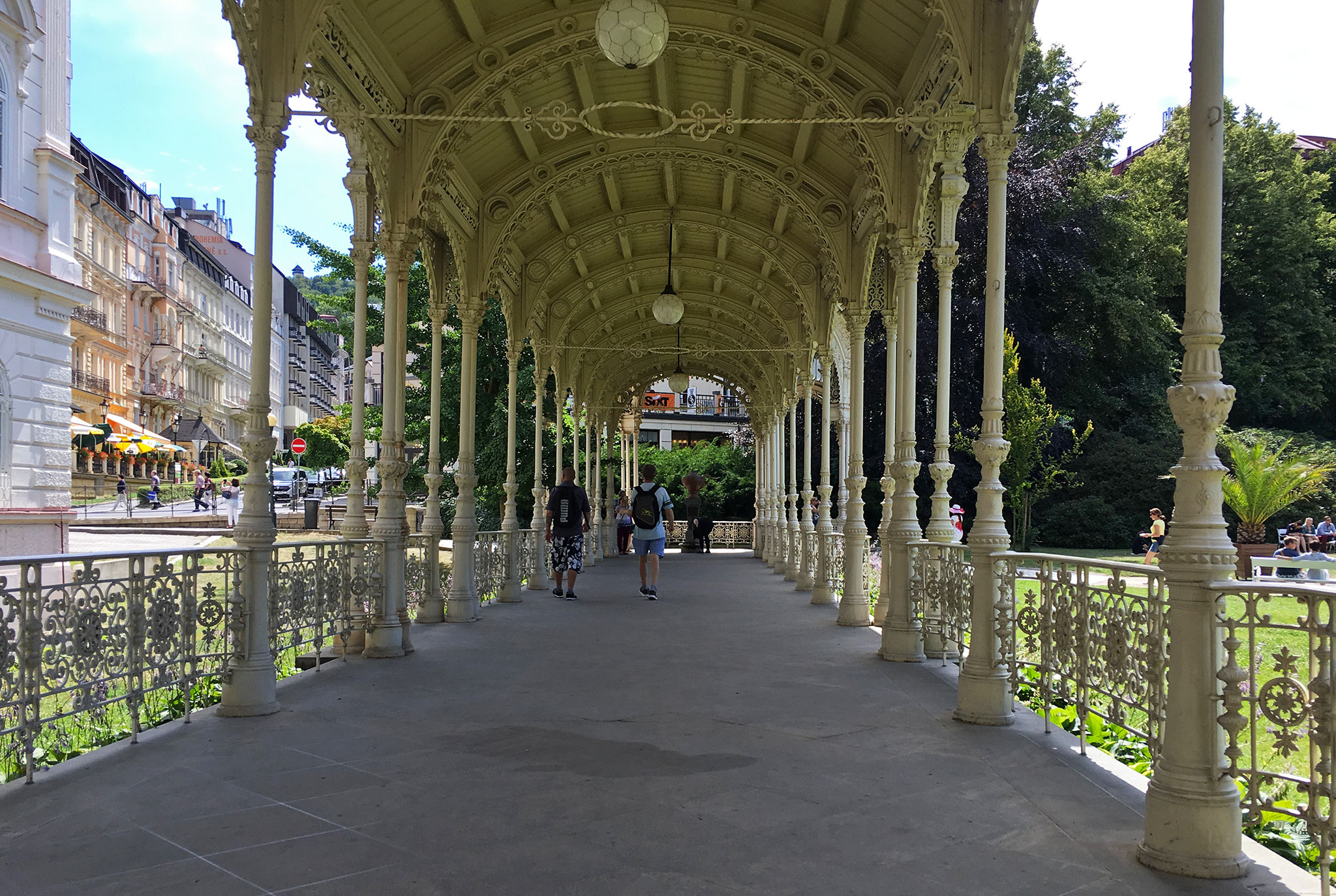 I’d been roaming about for a whole day. After days in the saddle it felt good but also tiring. Made a last sweep past some more remarkable buildings. 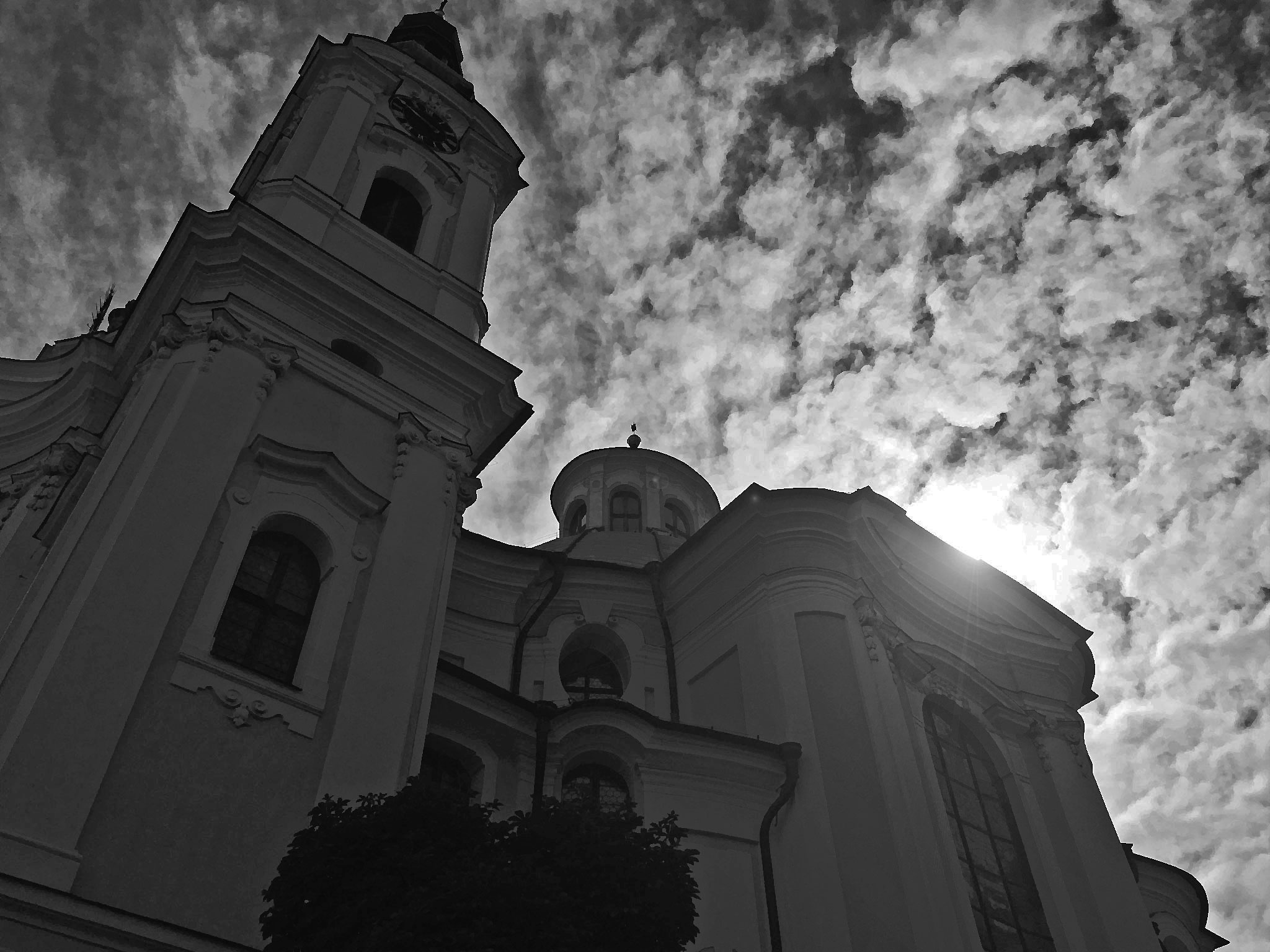 So headed back to the hotel for a swim. The pool  wasn’t big but I had it for myself.  A few laps later it was out to town for some pints Pilsner Urquell and a last meal.

A nice ending in Karlovy Vary,  might be back one day!

See also: next (and last) part