June 12th 2021, one year after my fatal accident in Telemark, I went back. No drama, just a strange feeling.

Truth be told I didn’t, and still don’t have, any memories of the accident. Some fragments from the moments right before the first impact. But beyond that, nothing. You could say I’ve been fortunate, amidst the unfortunate. Since I cannot remember much.

It had been the plan for some time. Me and my friend Trond started talking about the return  to Telemark while I was in rehab. Well I started to talk about it to be quite honest. At that time I had no idea how it would be, to ride a motorcycle again.  if I would be capable, to ride on longer journeys.

it was a Saturday. The weather forecast for the weekend was good. We started out following the same route west as the year before. To Kongsberg, then E139 to Notodden. But then we took Fv360 south to Gvarv, then Gvarvvegen or Rv36 (National road 36) in direction of Bø.

It’s a nice ride, the landscape in Telemark might not be the most exciting in Norway, but it’s pretty. 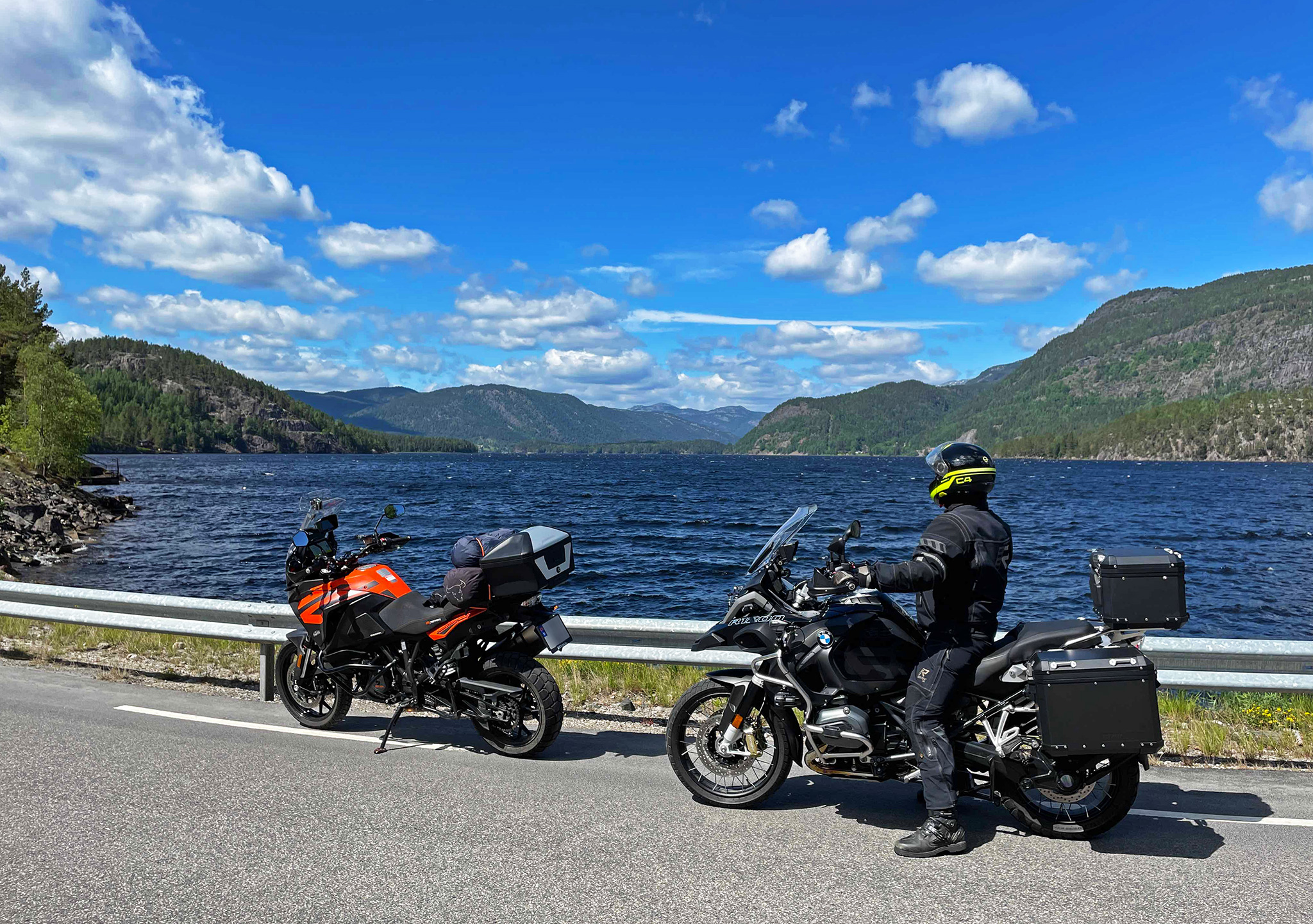 North of Bø we did like the year before. Took the road Garvikstrondi along the southern side of Lake Seljord.  Then west onto Heivegen, and shortly after onto Trollebotn. Latter is a gravel great road that leads south, to Kilen. How anyone came up with that name (Troll bottom in English) I don’t know. The road runs through some narrow passages that might the reason. 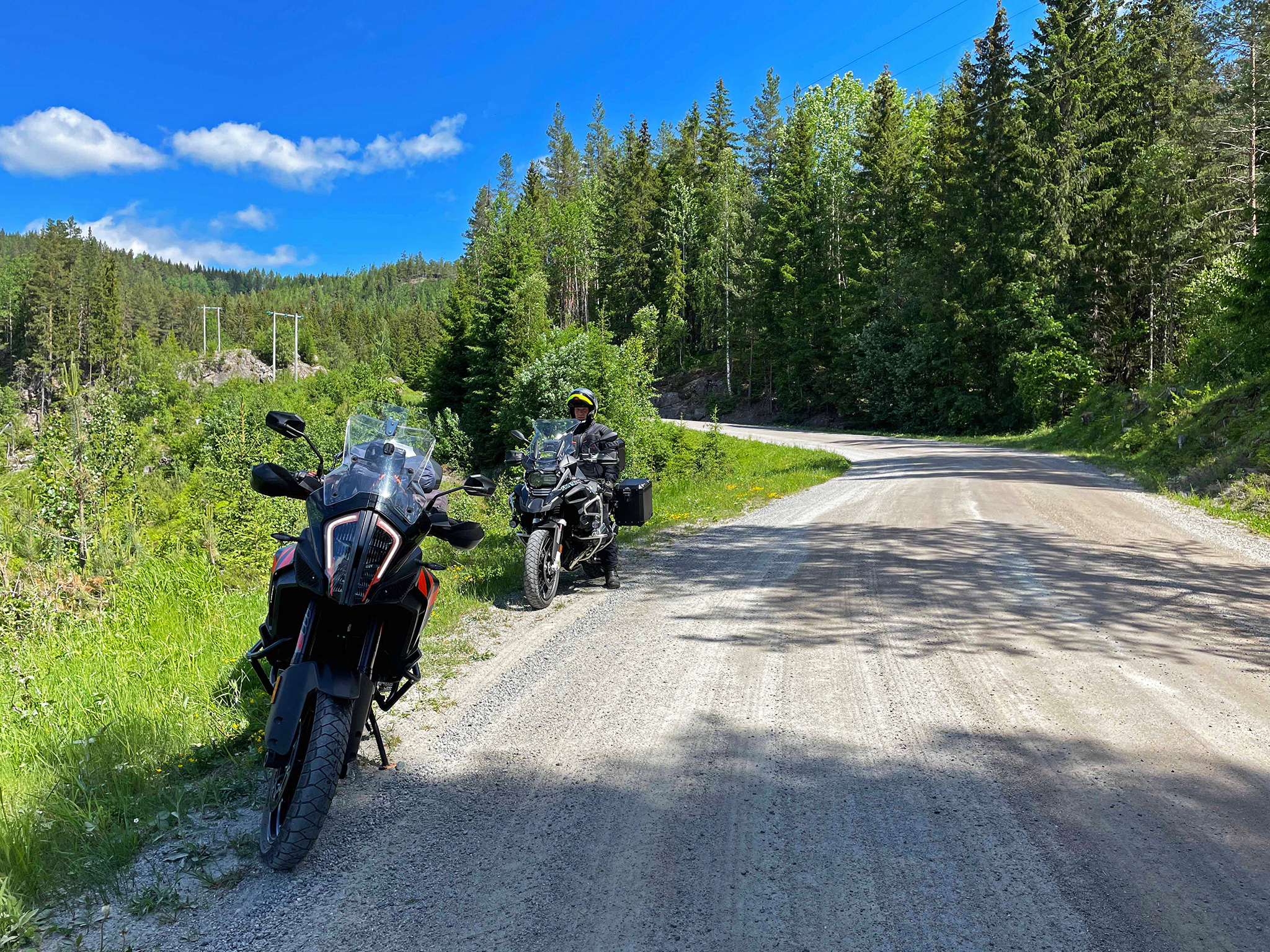 Stopped in the same spot as last year for a photoshoot.

From Kilen onto Østenåsvegen, along Flåvatn, to Fjågesund. Same route as June 12th 2020. We stopped on the Fjågesund bridge. Where I took the last picture before the accident, the year before. 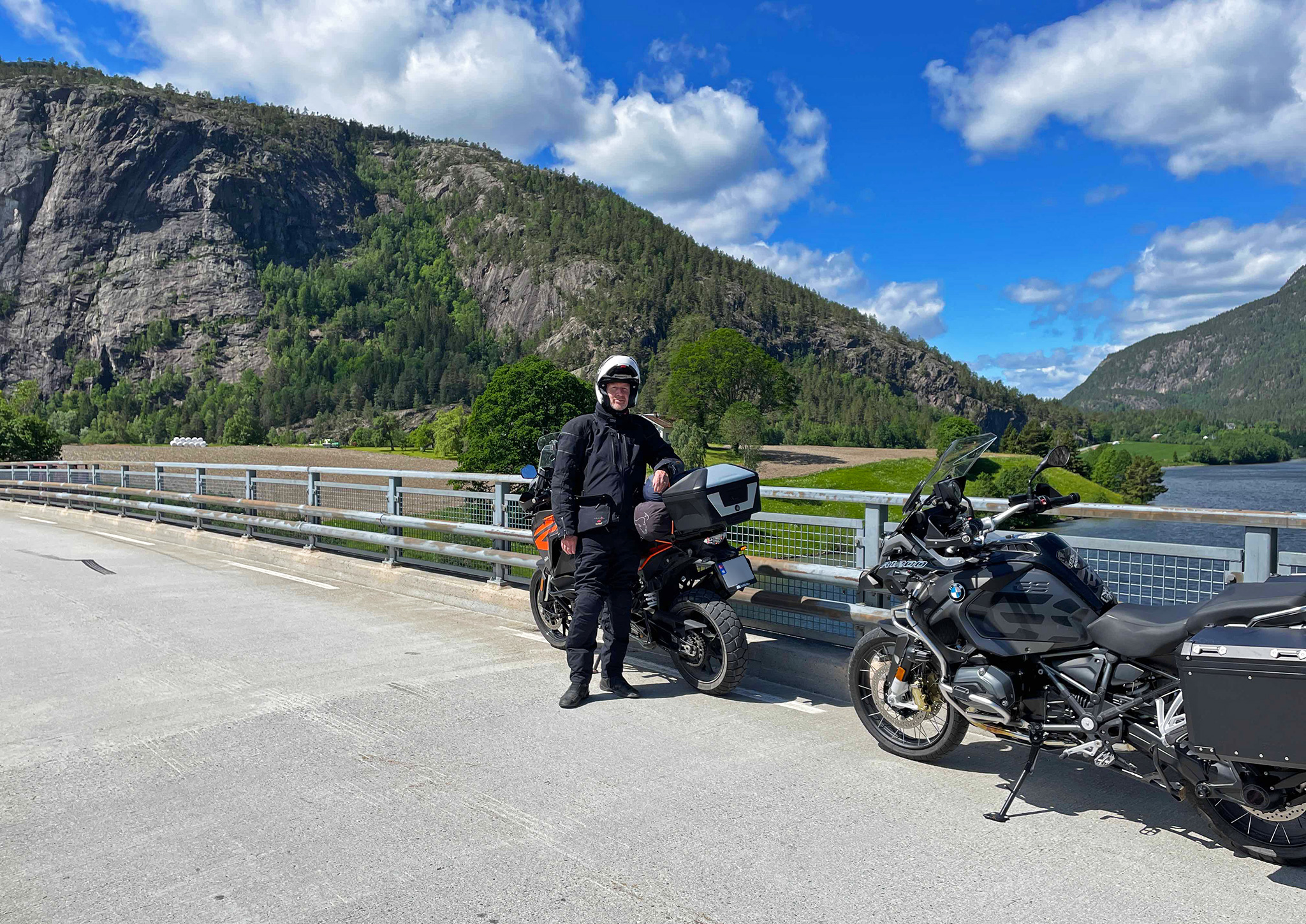 Me on Fjågesund bridge, one year later.

From Fjågesund we carried on north, along Fjågesundveien. Now my friend Trond was riding in front. Reason being I could not recall where shit happened.  It’s was wiped out. Plus it felt safe this time around. We rode on, and much farther than I thought it was.

Friend Trond at the scene of the accident. Where the bikes are, the first impact.

After kilometers than I could remember his turn signal came on. I stopped behind him and looked around, somewhat puzzled. Had no recollection of this left downhill turn. Not at all a obvious place for any accident to take place.  We found marks on a road fender pole. One of them had snapped.

Further down my friend Trond leaned over and picked up bike debris. Riding behind last year it was evident he recalled some parts of the “happenstance”. 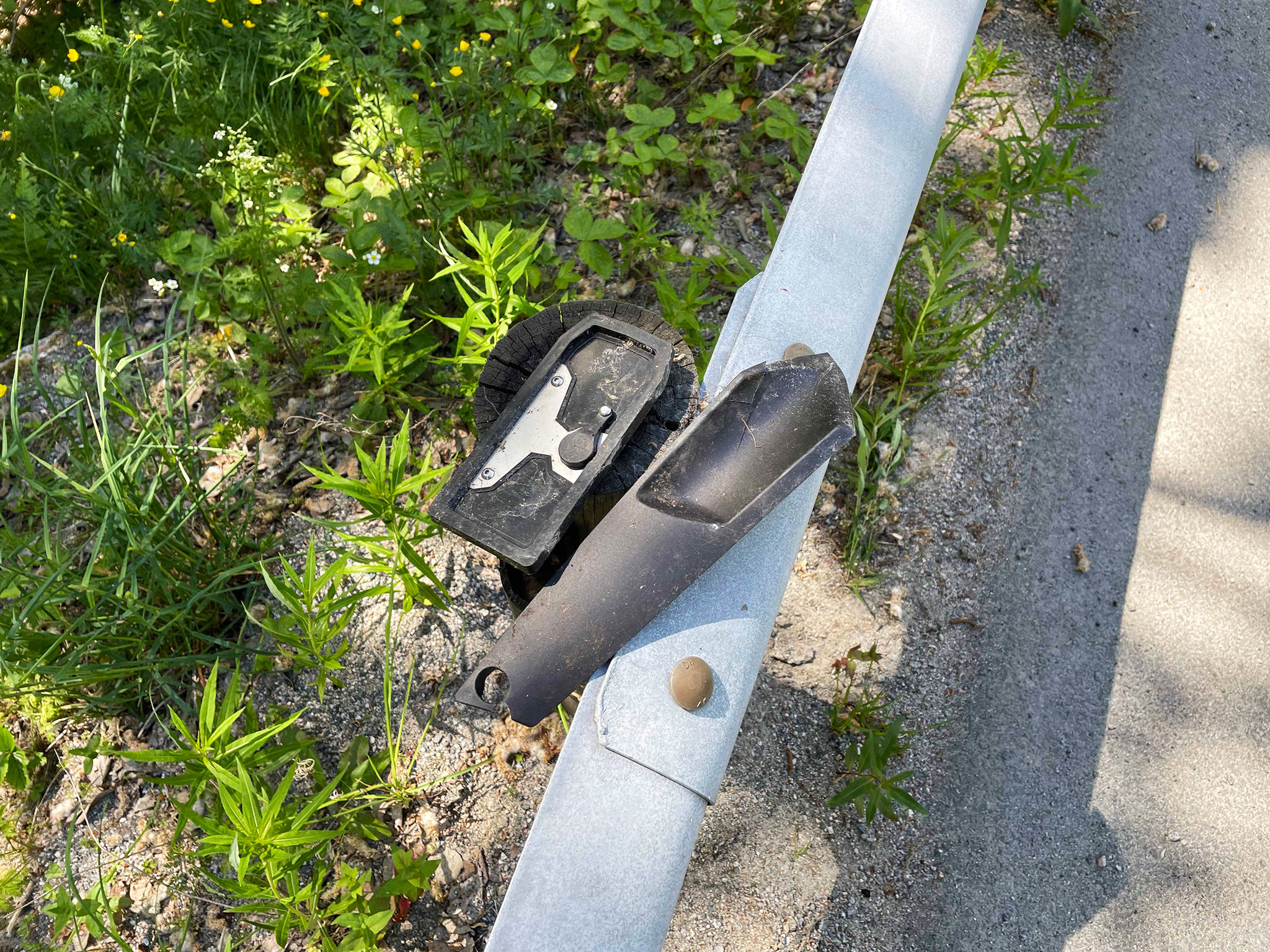 While there, some fleeting glimpses appeared. But not much more. We stayed for a little while, then continued west.

Unlike last year we had not planned to go all the way to Lysebotn. As it turned out we did ride to Lysebotn in July.  More about that trip later. So we continued west to Vrådal, then westward over the mountains. At a Flateland camping in Valle we had booked a cabin. Just like the year before. 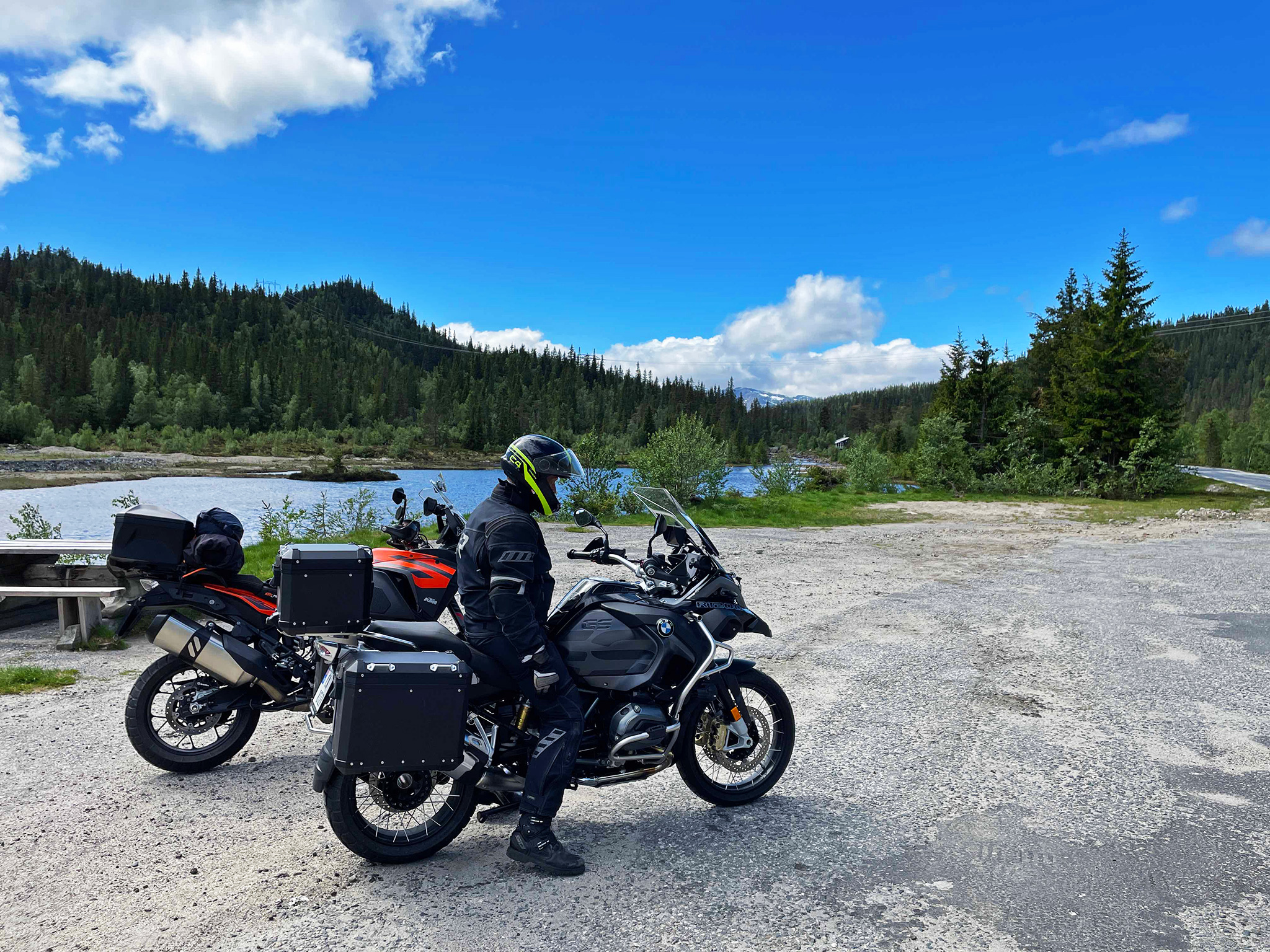 A short stop along Rv45, also known as Borsævegen

If you want to keep spending low on accommodation in Norway, but don’t feel like tenting, a cabin at a camping is a cheap option. We paid NOK550 for ours. The cabin has room for 4 people. So less than NOK 140 per person if four. 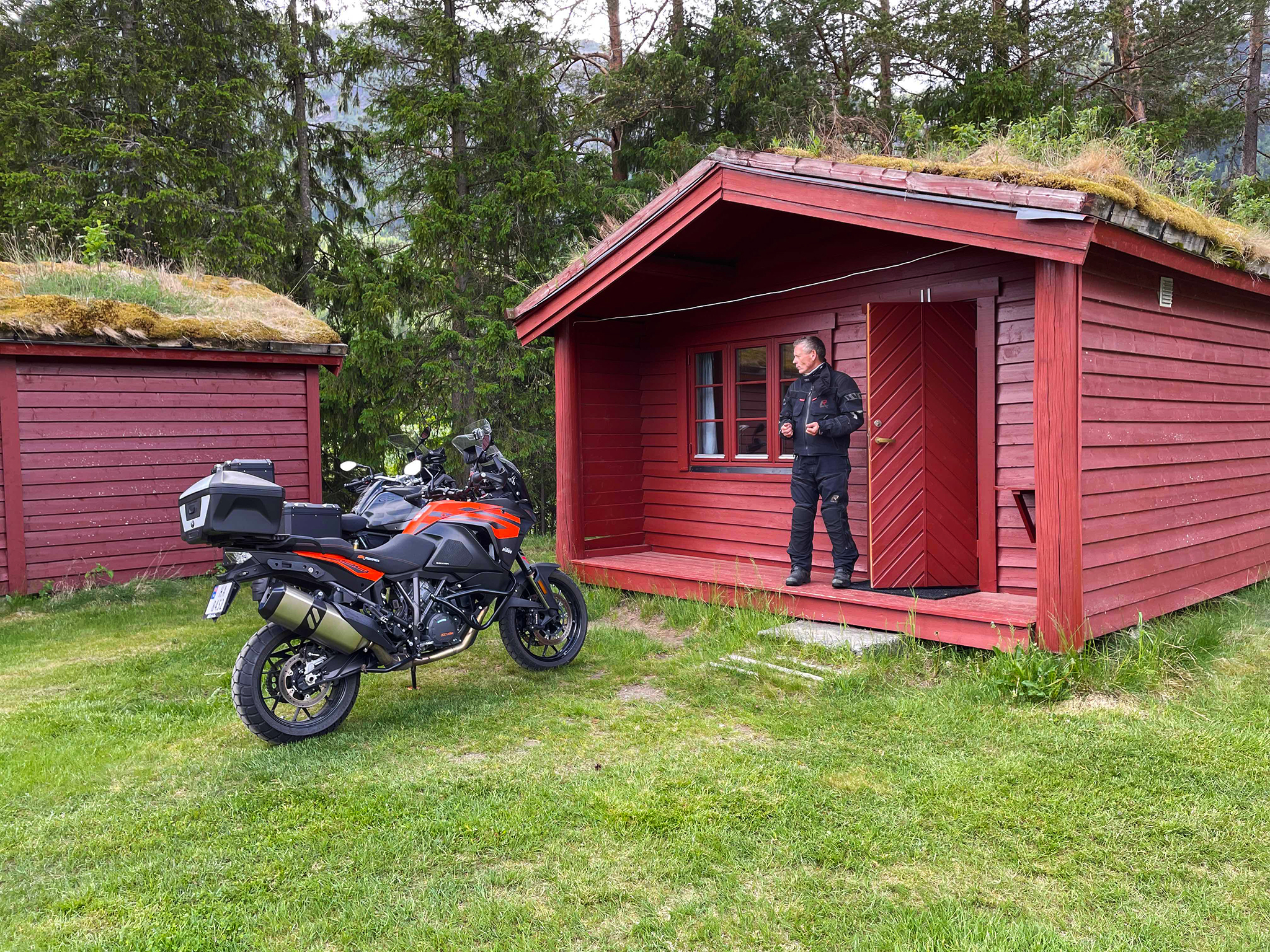 Trond outside the cabin at Flateland camping – Valle

There’s no cafè or restaurant at the camping. But they do have some groceries, and snacks. The cabins are equipped with cooking options and a fridge. Showering facilities plus a place to wash clothes likewise. Less than 10 minutes away you’ll find Bergtun hotel. With an excellent restaurant. Expect to pay around NOK1250 per person if you want to stay overnight.

The next day we decided to take a different route back home. So we followed Fv9 from Valle to Hovden, then carried on over Haukelifjell. Parts of this road isn’t very exciting. but when you begin the descent on the other side there are more twists and turns. 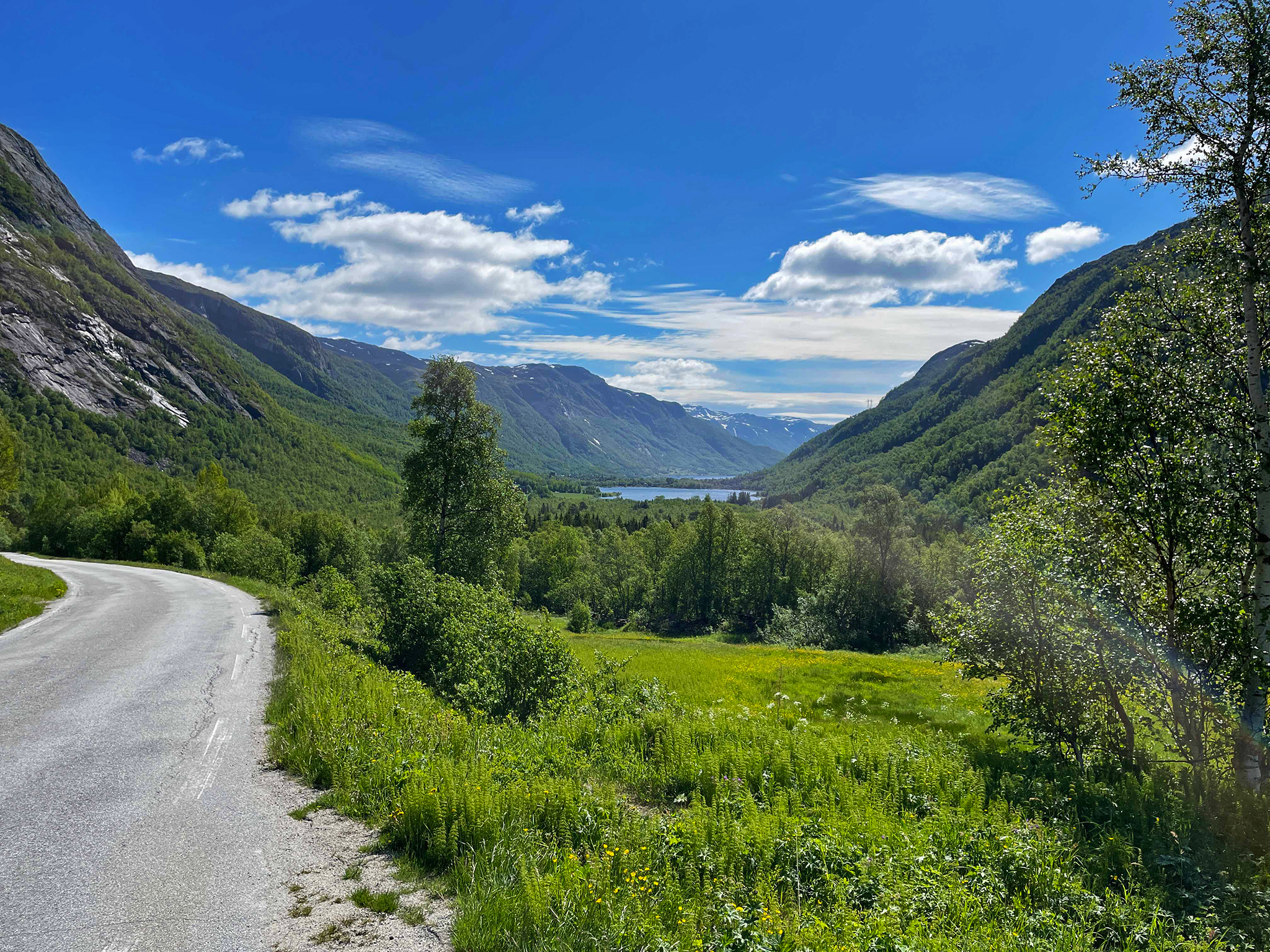 View from along Fv362 to Arabygdi and Rauland

From Haukeli we took Fv362 over Arabygdi down to Rauland. This road is cool, much more interesting than E134. And a pleasant ride.

In Rauland we got onto Fv37 in direction of Rjukan. The descent to Rjukan is pretty cool. Down the road you also pass Vemork, a site that carries important history. And not only for Norway. 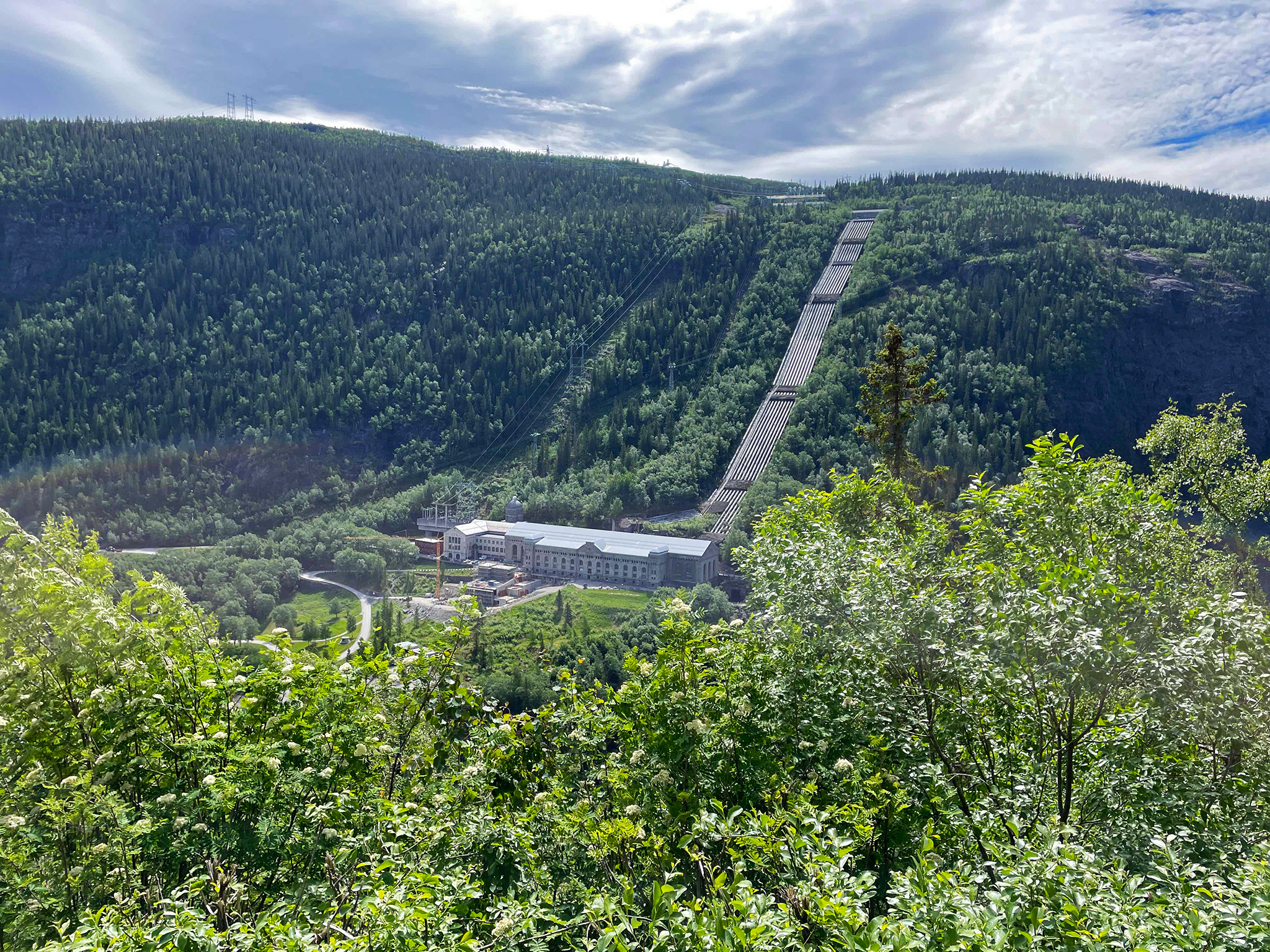 A below the mediocre roadside shot of Vemork

Where we stopped for a bite in Rjukan. It was surprisingly hot there. Rjukan is a town that is situated in a deep valley. During winter months it doesn’t get any sunlight. So to compensate they’ve mounted large mirrors up on the hills around. These reflect sunlight onto the town square. Details here. 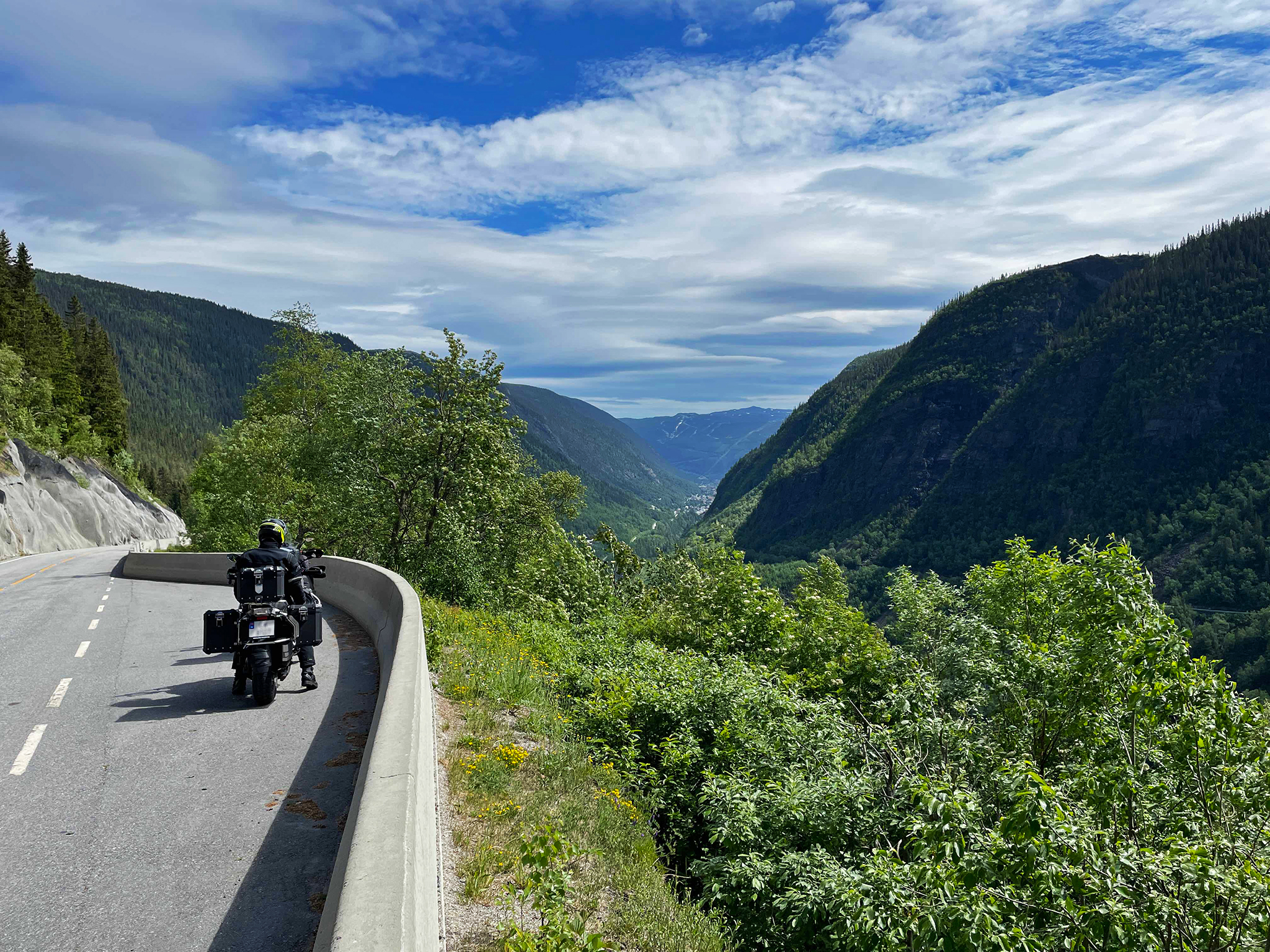 Along Fv37, and the descent to Rjukan

After Rjukan we continued to Kongsberg, and then home. It had been a great two-day excursion! Below the route. Looks like I forgot to switch the app on at some point. Oh well.

The route, with a tracking glitch.