August 21st it was time to be heading south again. Given what happened to me last year the level of excitement was pretty high!

Earlier in the year I wasn’t sure it would be possible, because of Corona. In Scandinavia as well as Europe. After multiple spring adventures in Norway I knew I was ready. Especially after the last ride to the west coast of Norway.

July 1st Europe opened up. Restrictions was lifted for those vaccinated.  It was possible to travel provided you had a EU approved vaccine certificate. I received my second dose of Corona vaccine late May, and had a certificate. 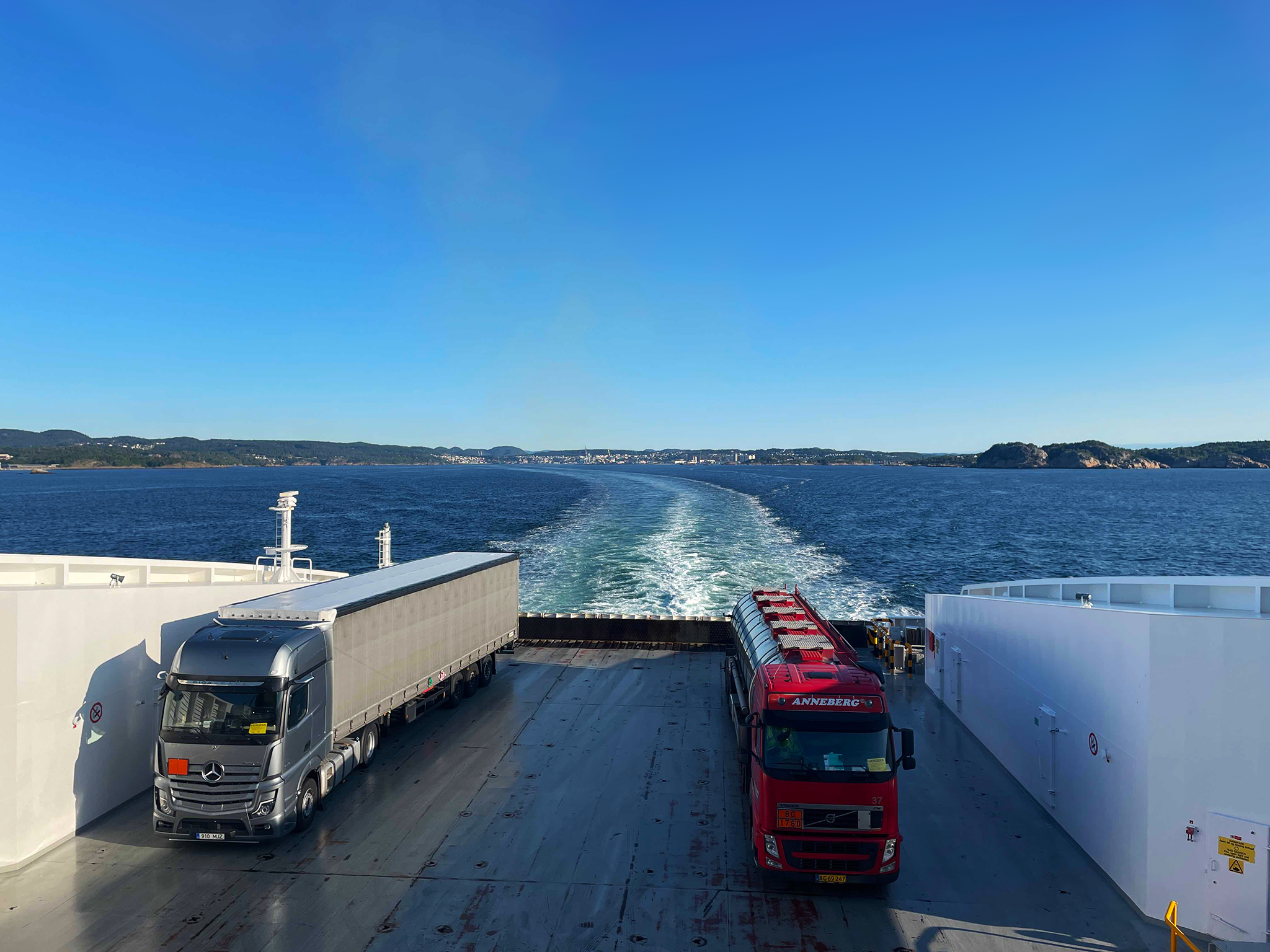 On the Larvik – Hirtshals ferry

So August 21st, (very) early in the morning I took the usual route, heading south/southwest, from Oslo down to Larvik. The Larvik – Hirtshals ferry is an excellent way to get out of or into Norway. It’s time efficient, and reasonable. The ferry leaves from Larvik 8AM, and arrives in Hirtshals 11:45.

Getting off the ferry is relatively quick.  How quick depends on amount of cars and trucks. And where you are parked on the car deck. But soon enough I was on the freeway out of Hirtshals. For a while. Then over onto smaller roads. I blazed through Denmark with just a few stops. But one thing happened. One thing that proves bikers, well most of us, look out for each other.

Somewhere in the middle of the country I stopped. My new Apple Airpods would not work properly. I could write a lot about those. It would not be pretty. Anyway, the noise cancelling had conked out. So I stopped roadside to try to fix it. 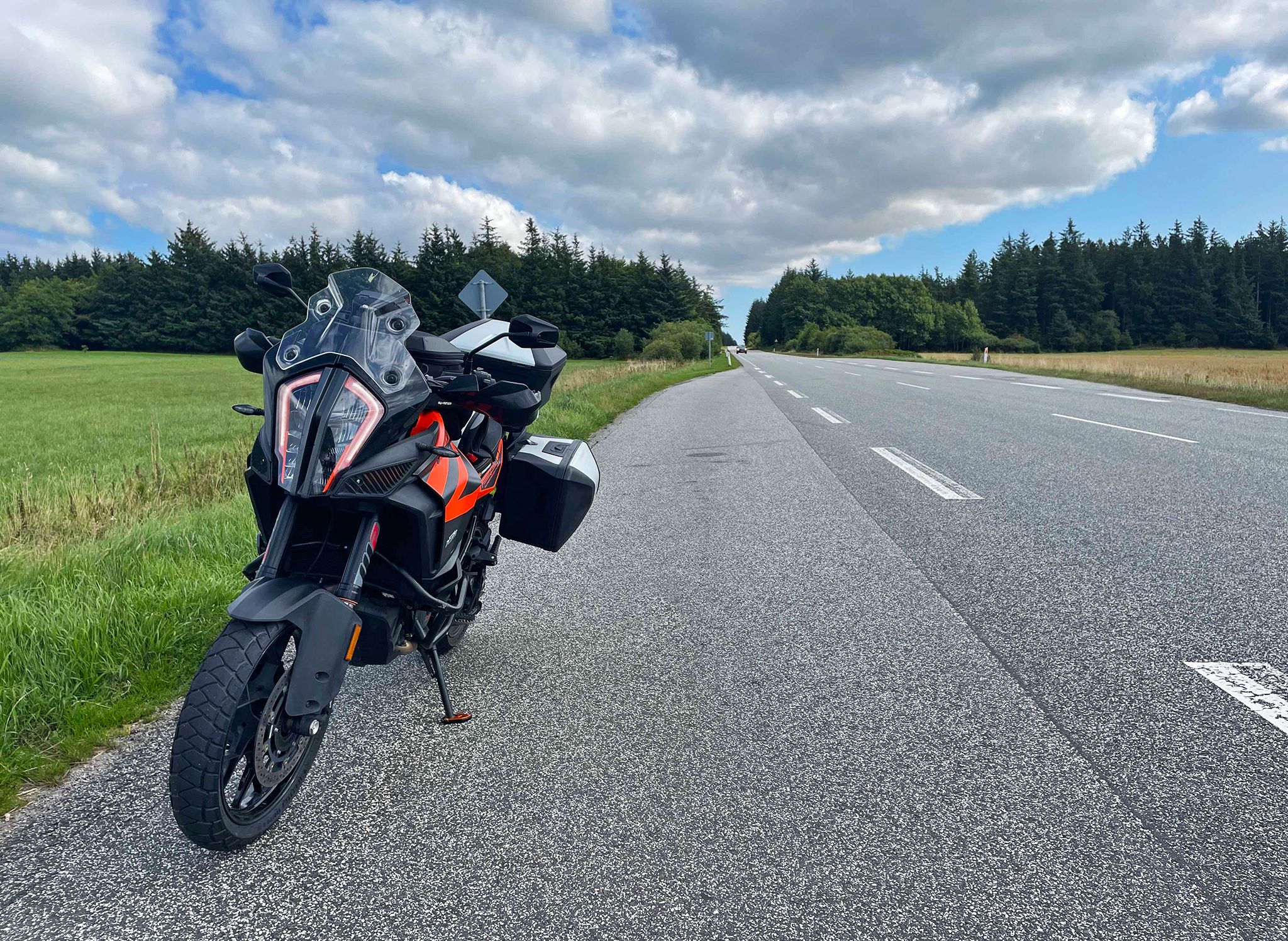 While I was standing there, immersed in techno issues with noise cancelling cancelling, two bikers rode by. Suddenly they stopped on the other side of the road, and came over to me. They wanted to know everything was ok.   If I had no technical issues of any sort. We chatted for a bit, then they left. Nice people! Shortly after I continued, heading south towards Germany.

I’ve stopped several times myself, when observing bikers along the road. If you ride a motorcycle I am sure you agree. it’s the right thing to do. You never know.

Around 7PM I crossed the border over into Germany. Just like before, no checkpoint, no control. Shortly after I rolled into the Schlewsig, a little town south of Flensburg. I chose this town because it’s reasonable proximity to the Glückstadt – Wischafen ferry, my usual route past Hamburg. I like to avoid Autobahn and high traffic areas as much as I can. Been stuck on the Autobahn enough times.

Finding Hotel Alter Kreisbahnhof was easy. A rebuilt train station in the middle of town. Nicely job! Very good standard for not too much money. It checked all the boxes I need a hotel to check. Great food too! Wearing mask obligatory, when not seated at a table. No surprise there. 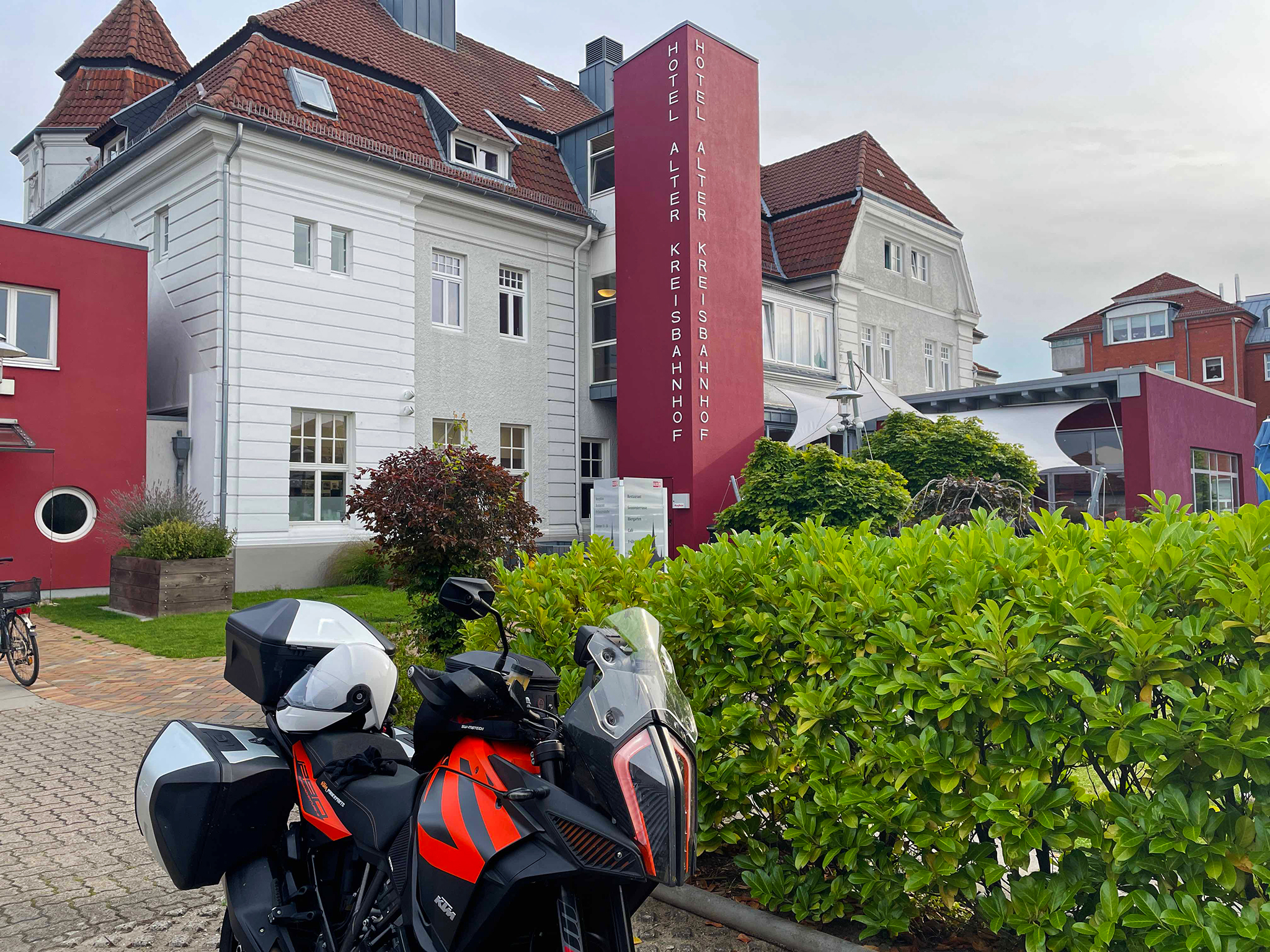 Hotel Alter Kreisbahnhof in Schleswig. A hotel I can recommend to anyone

The next morning I continued southwest to Glückstadt or Happiness town in English. The ferry across Elbe is quite busy during summer months. Apparently high traffic season also last till late August.  I understand why.  It’s a great route. Came this way in 2019, and won’t hesitate choose it again. 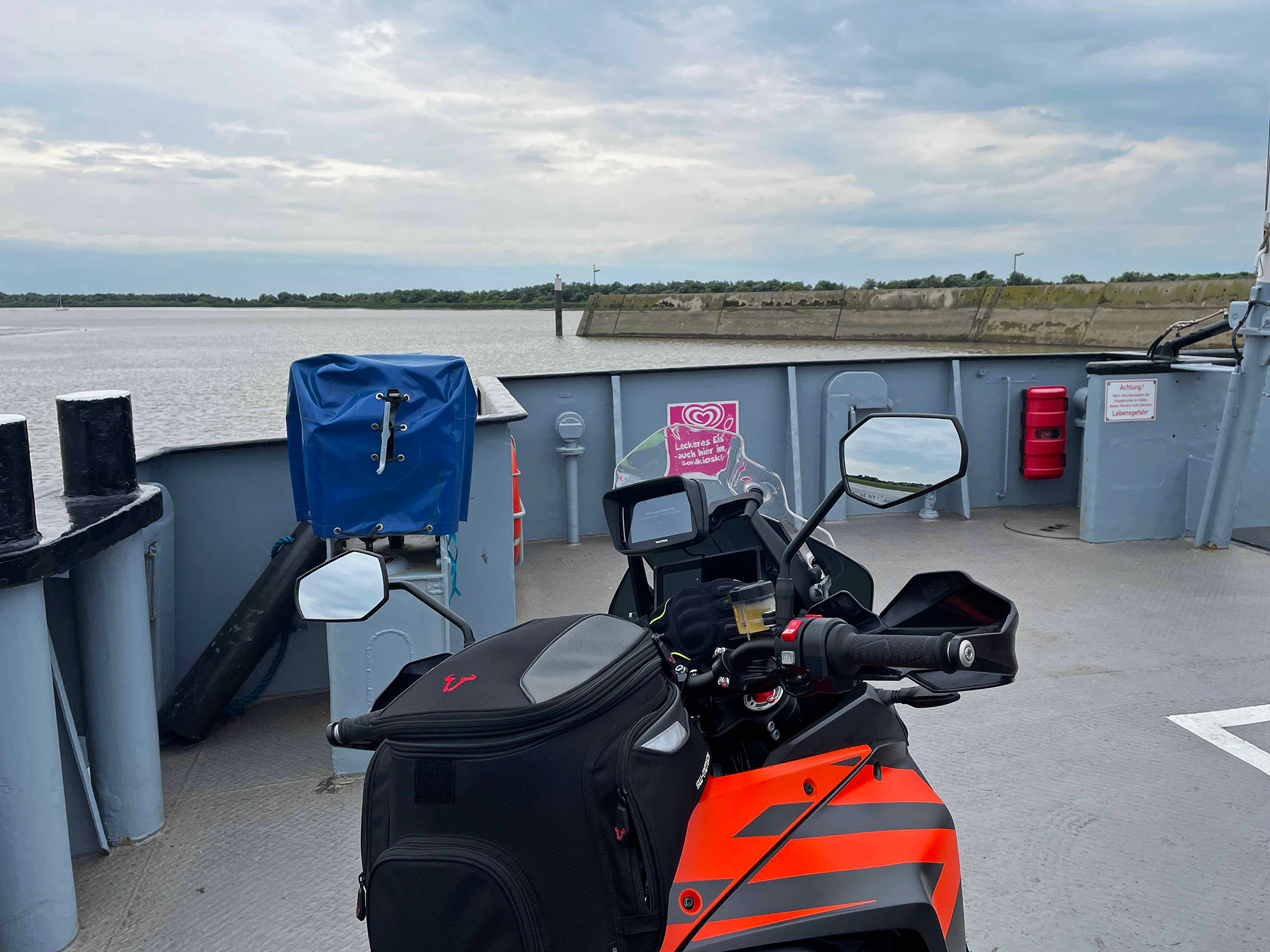 The ferry across Elbe Wischafen takes about 25 minutes

Once over on the other side the plan was to take small roads, in direction of Höxter, a small town in the southern part of Lower Saxony. But the weather changed. Soon is was raining cats and dogs. So I stayed on Bundesstraße for the most part, and munched miles.

The destination of the day, or rather afternoon, was a hotel right outside Höxter. A town that charmed me back in 2018. On the way I wanted to stop by Amelungsborn Abbey, with history dating back to 1138AD. 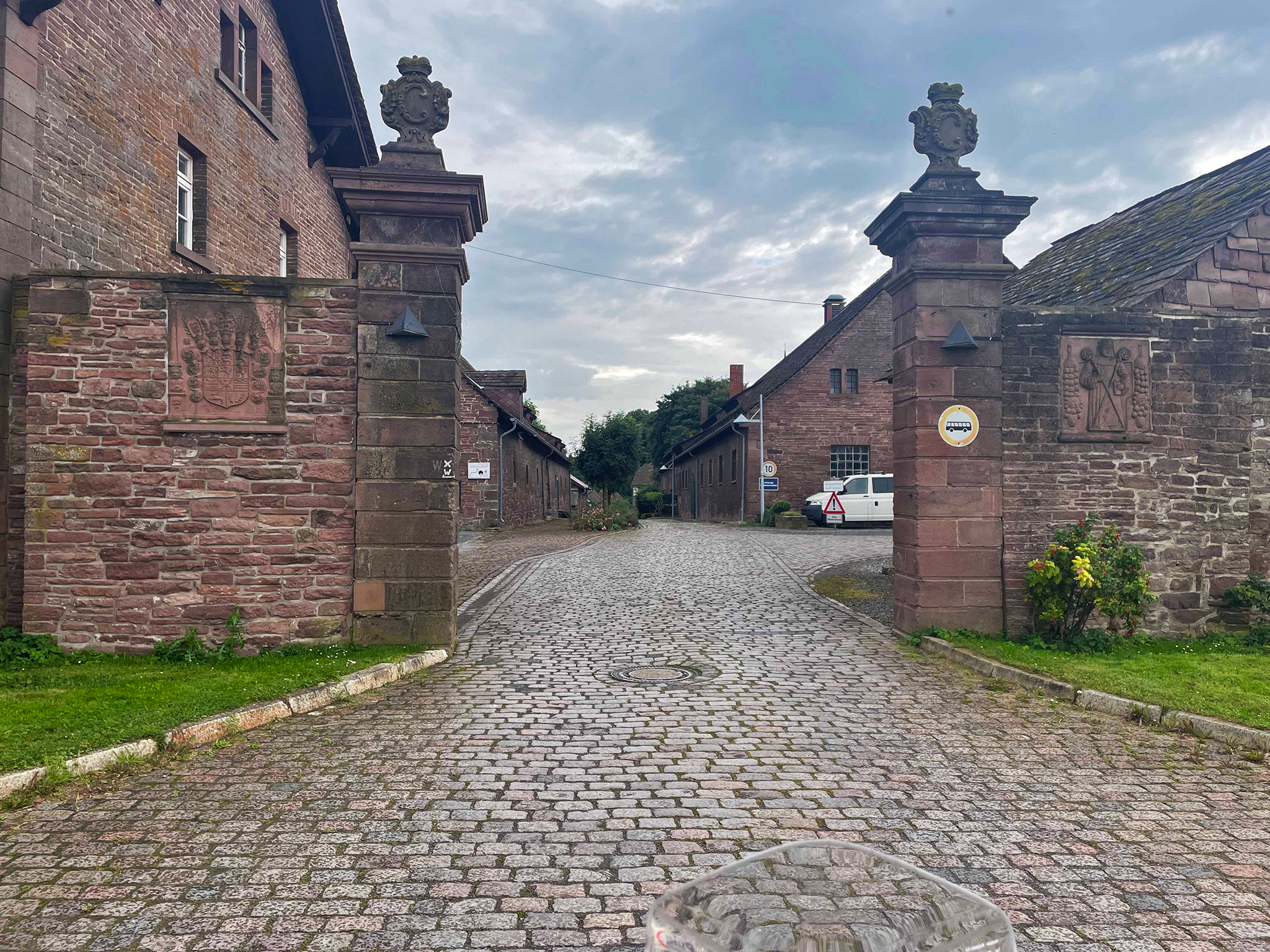 Last time I almost missed it, and rode past its gates. But something had me stop, compelled me turn around. I am glad I did. if it wasn’t for my ad-hoc decision making, plus incline to improvise (more often than not) I would not have discovered this place. 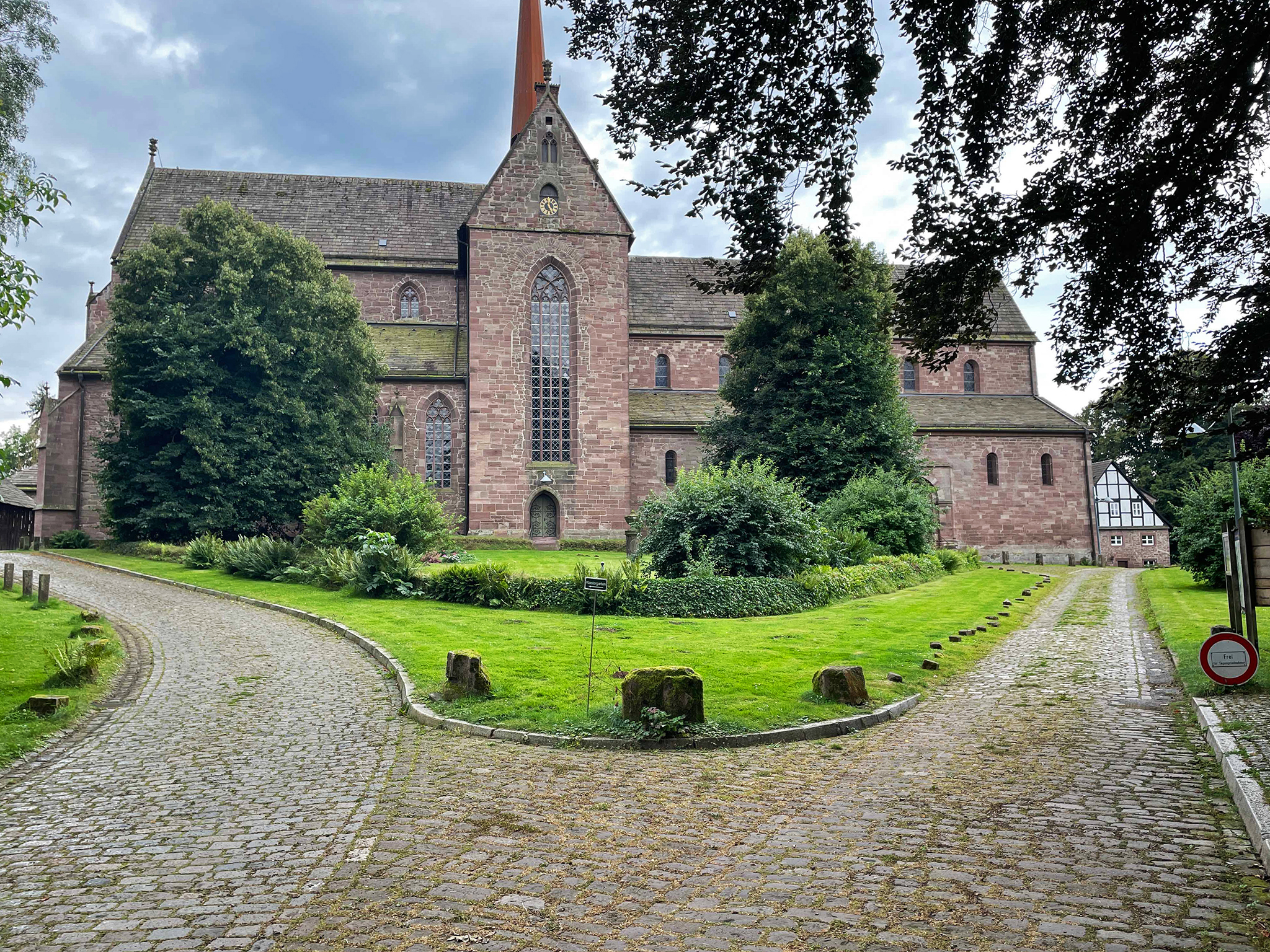 What’s the best word to describe the atmosphere. Well I think serene works. I stayed for a bit, then rode the last half hour, through the city of Höxter to my destination. 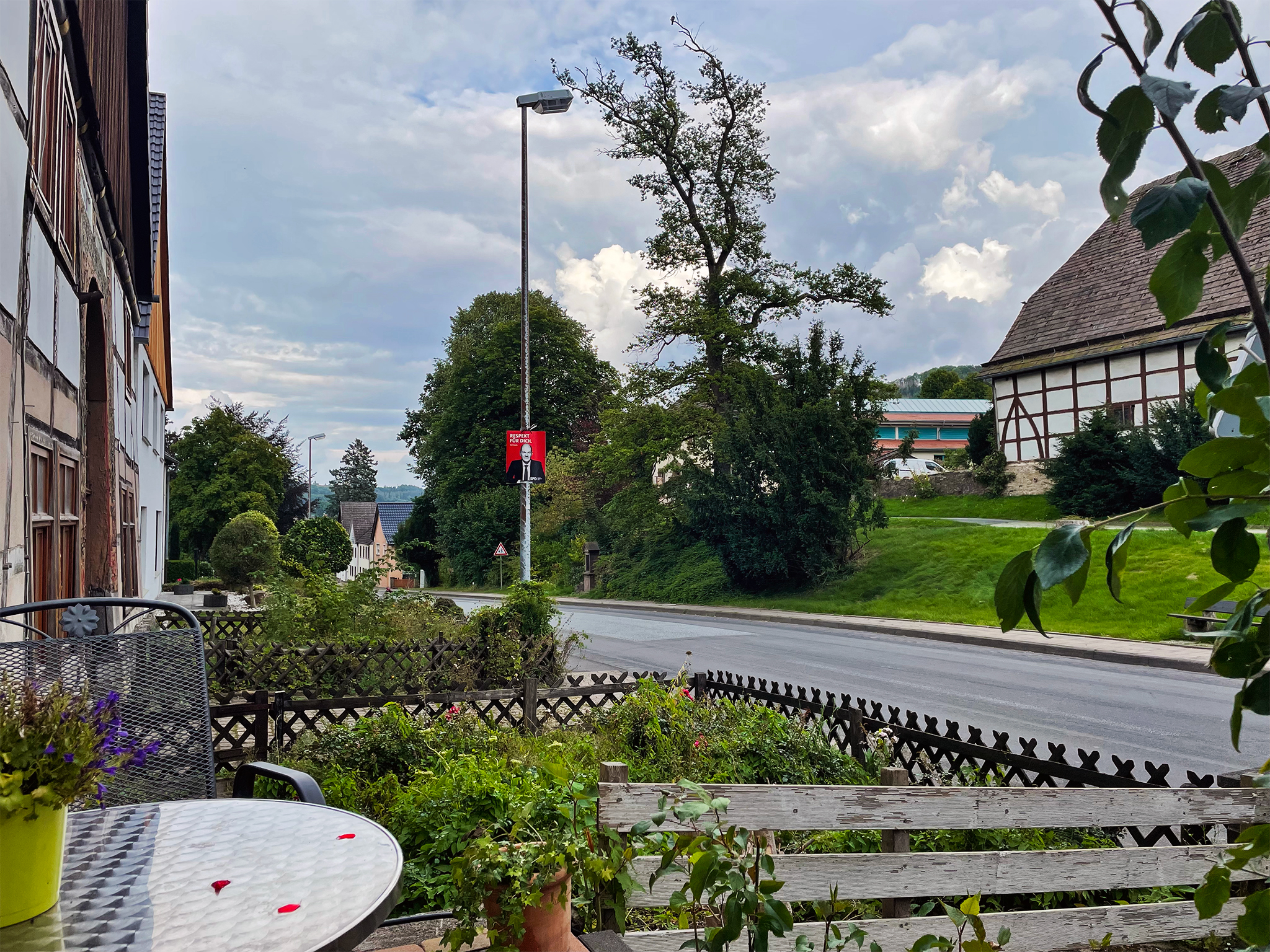 Street view from outside Hotel Am Jakobsweg

Hotel/Restaurant Am Jakobsweg is just outside of town, an old building in a quiet little village.  Looked like something from the 15th to 16th century. Perfect for a traveler, in need of a quiet place to crash, a place to park the motorcycle, which this hotel has, plus some good food and beer. 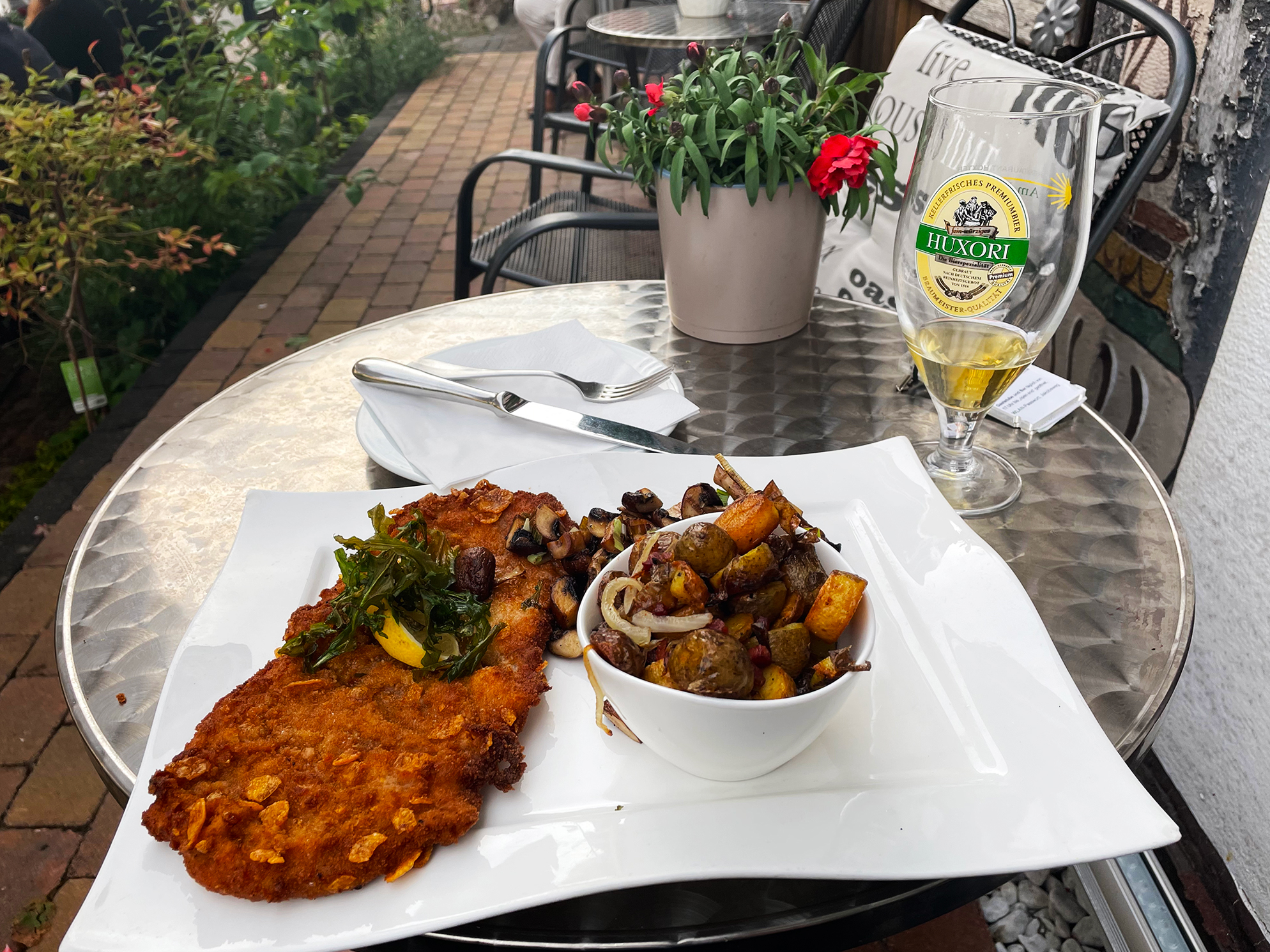 After a side dish the main course. Yummy!

If there’s one thing you always can trust while riding or driving through Germany, it’s accommodation, food and service in general. And beer! Later I crept to bed and slept like a baby till breakfast.  The next day I continued south to Schwarzwald (Black Forest).

More about that coming soon. 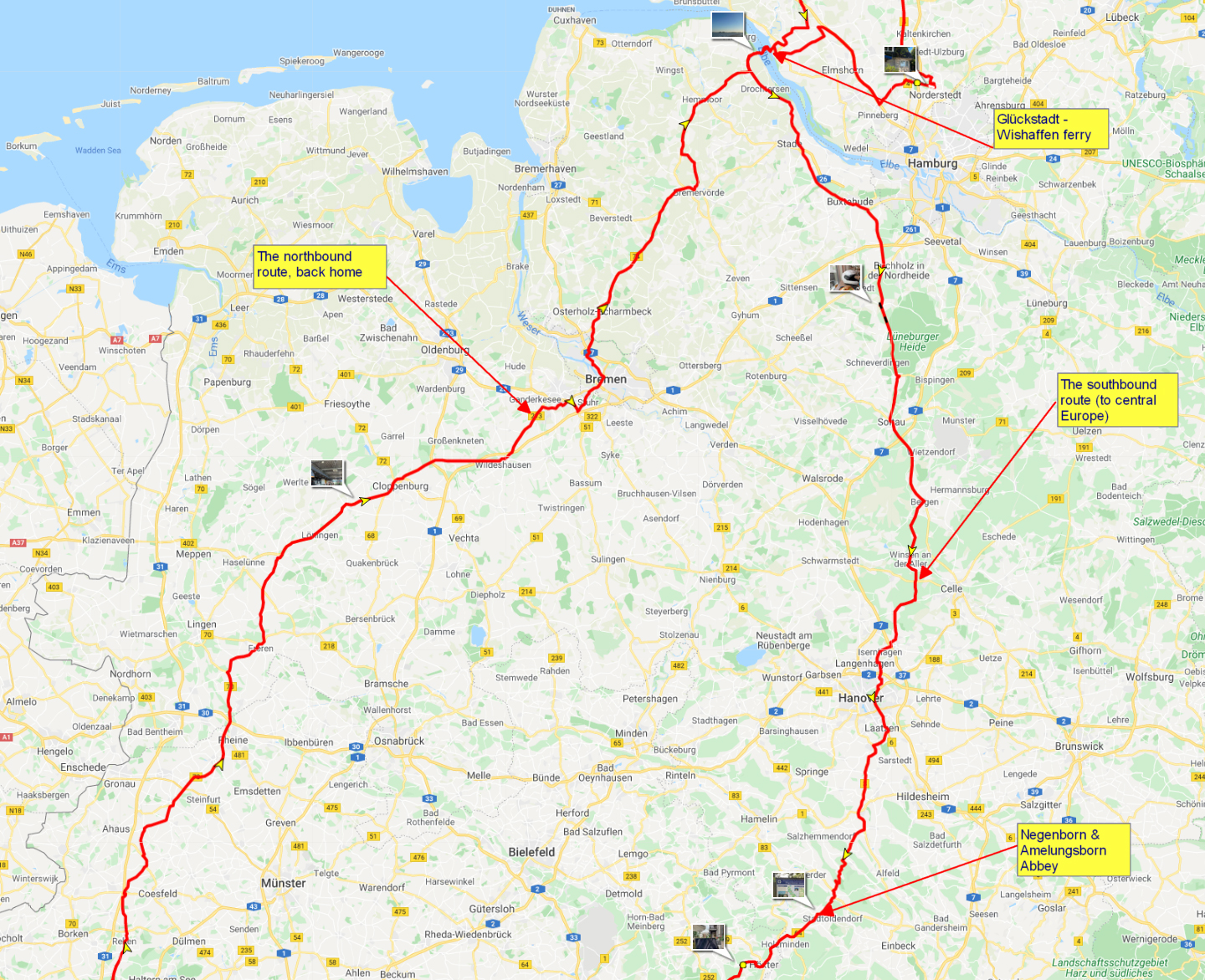 Map of the route the second day (the southern one)