One of the plans of August 27th was Gorges de Verdon, and side south in France. There are beautiful sights to be seen there, in plenty!

Before leaving home i had created a wish list of places. Originally I’d also thought to stay longer in the southern parts of France. Believing that, it being late August, it would not be sweltering. Ambitiously I even considered the Mediterranean coast. Or at least a bit further south than Gorges de Verdon.

Well, things seldom go as planned. Which is why it’s always good to either have a plan B, or be prepared to improvise. I tend to end up doing the latter.

Underway I had some passes to ride across. The day began with riding the same road over into France I’d done the day before. Coming down on the French side, I turned south towards Briançon. Which by the way is the highest city in France, sitting at an altitude of 1.326 meters.

Didn’t stop in Briançon. Instead turned onto D902 right south of the city, and began the ascent, up to Col d’Izoard. 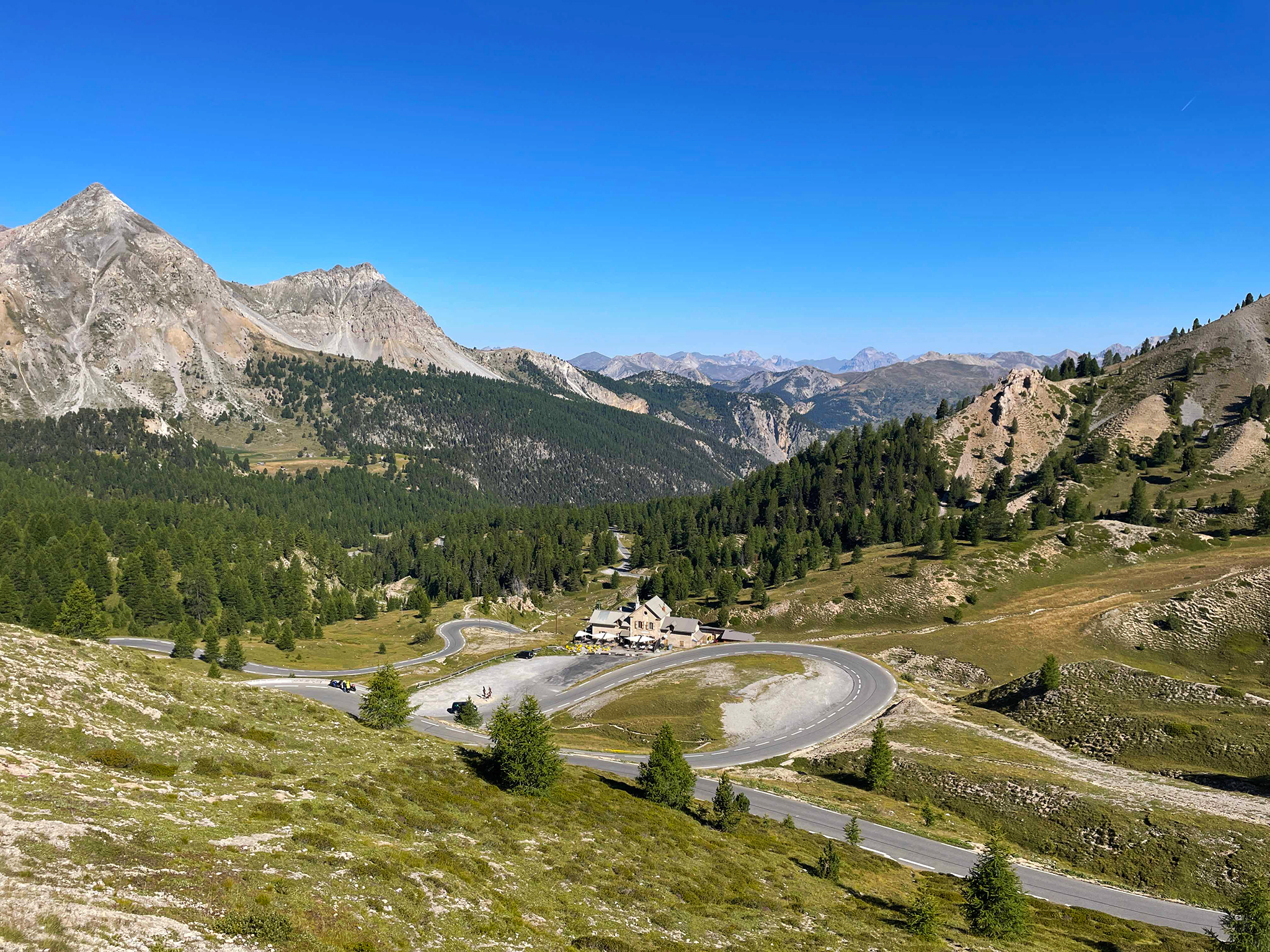 As one climbs higher the landscape becomes more barren. Reflected on how different the Alps is in France are, as opposed to in Italy and further east. 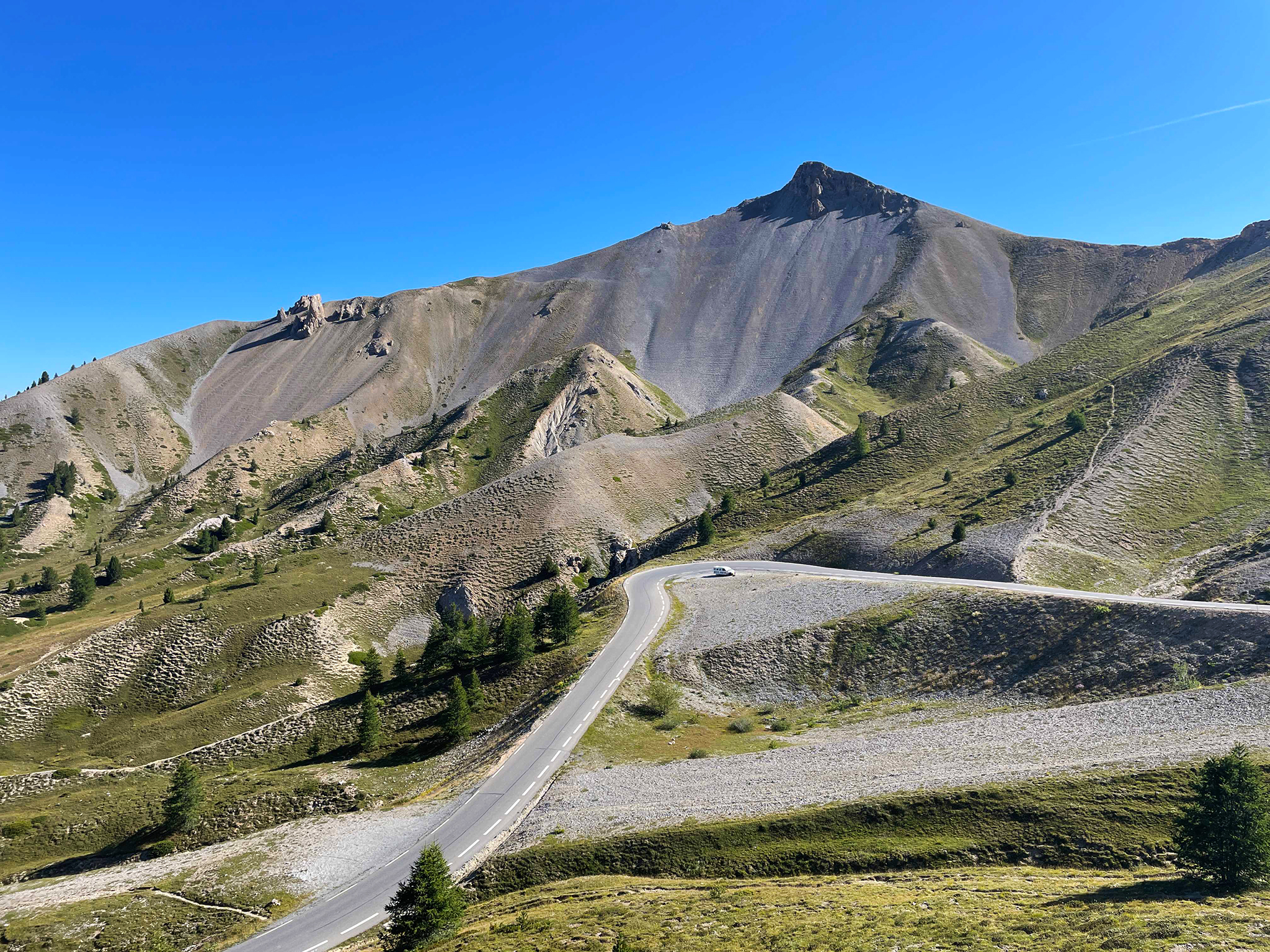 Further up along the D902 to Col d’Izoard in Provence-Alpes-Côte d’Azur (Hautes-Alpes).

Not long after I reached the pass which sits at 2.360 meters. Stopped for a little to take some pics and admire the view. it was around 10:30 in the morning, and plenty of motorcycle riders about. 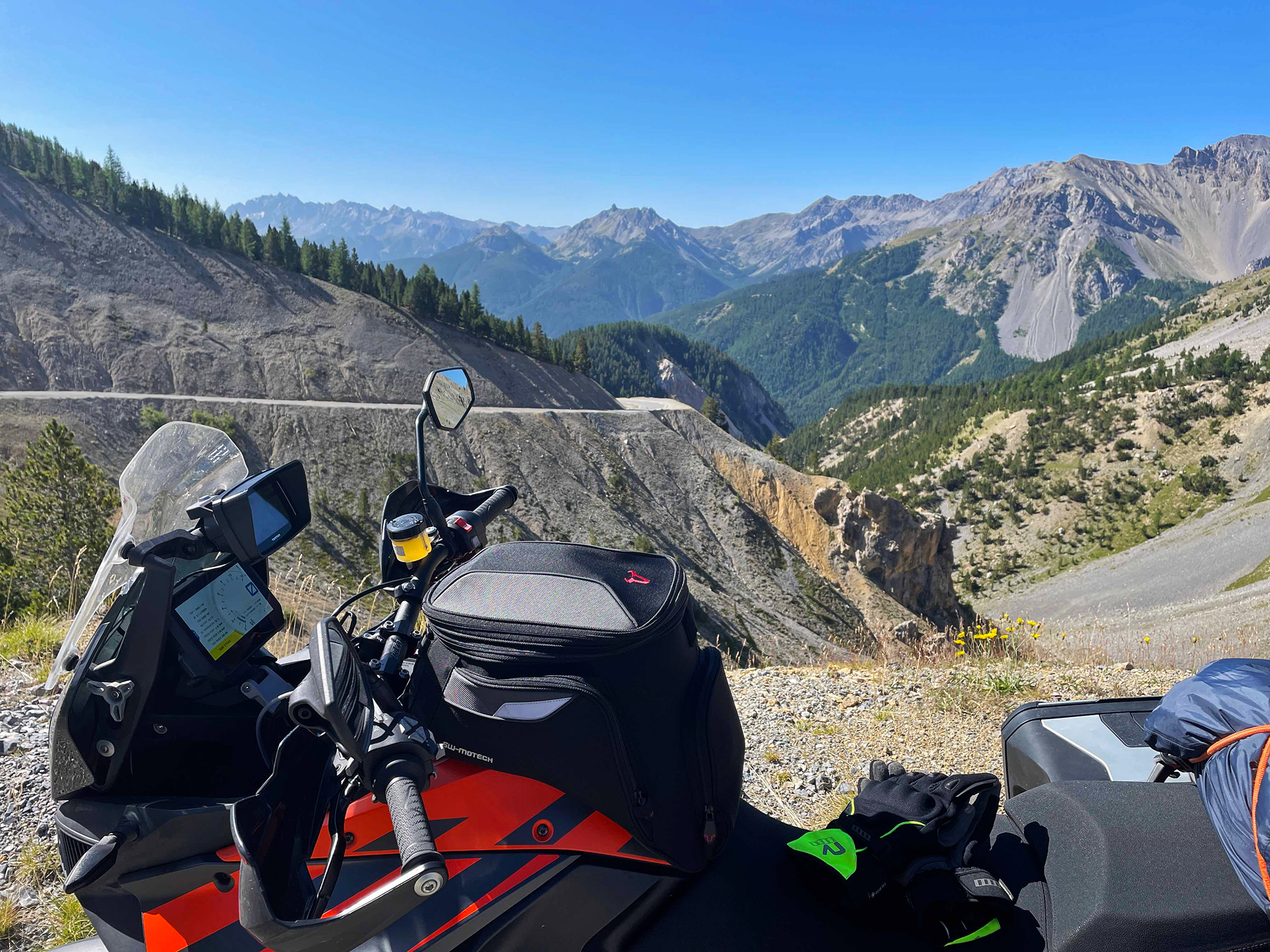 The pass itself isn’t very interesting to be honest.  But on either side views in plenty to mesmerized by. Like the below scene, further down the road, in direction of Guillestre. 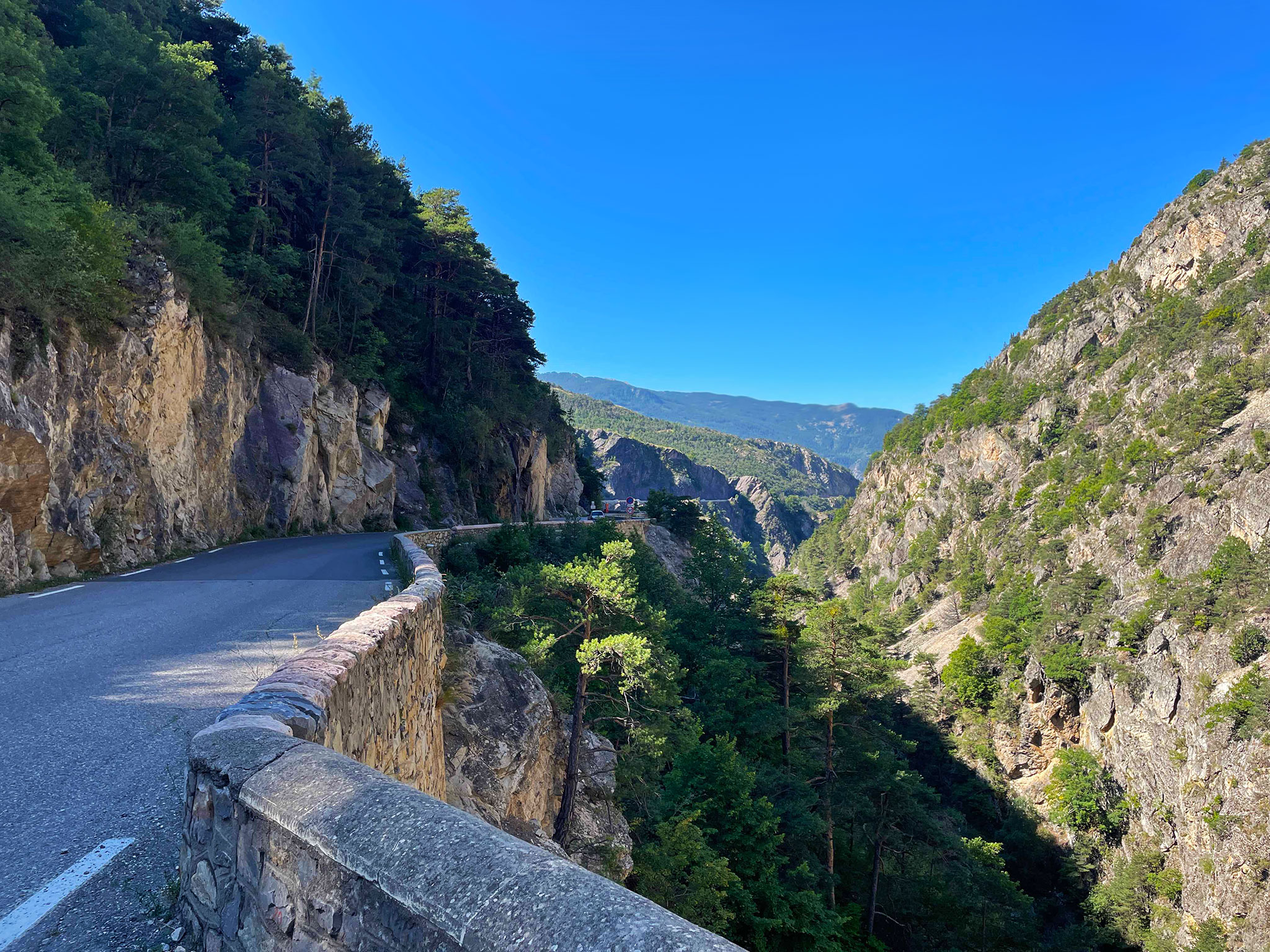 Along the D902, a few miles north of Guillestre.

South of the town I continued along the N94, in direction of…

You find it in the Provence-Alpes-Côte d’Azur region. A water reservoir, used to collect water from the alpine mountains in the north. I reached it around noon. It was pretty, with quaint little villages alongside the lake. 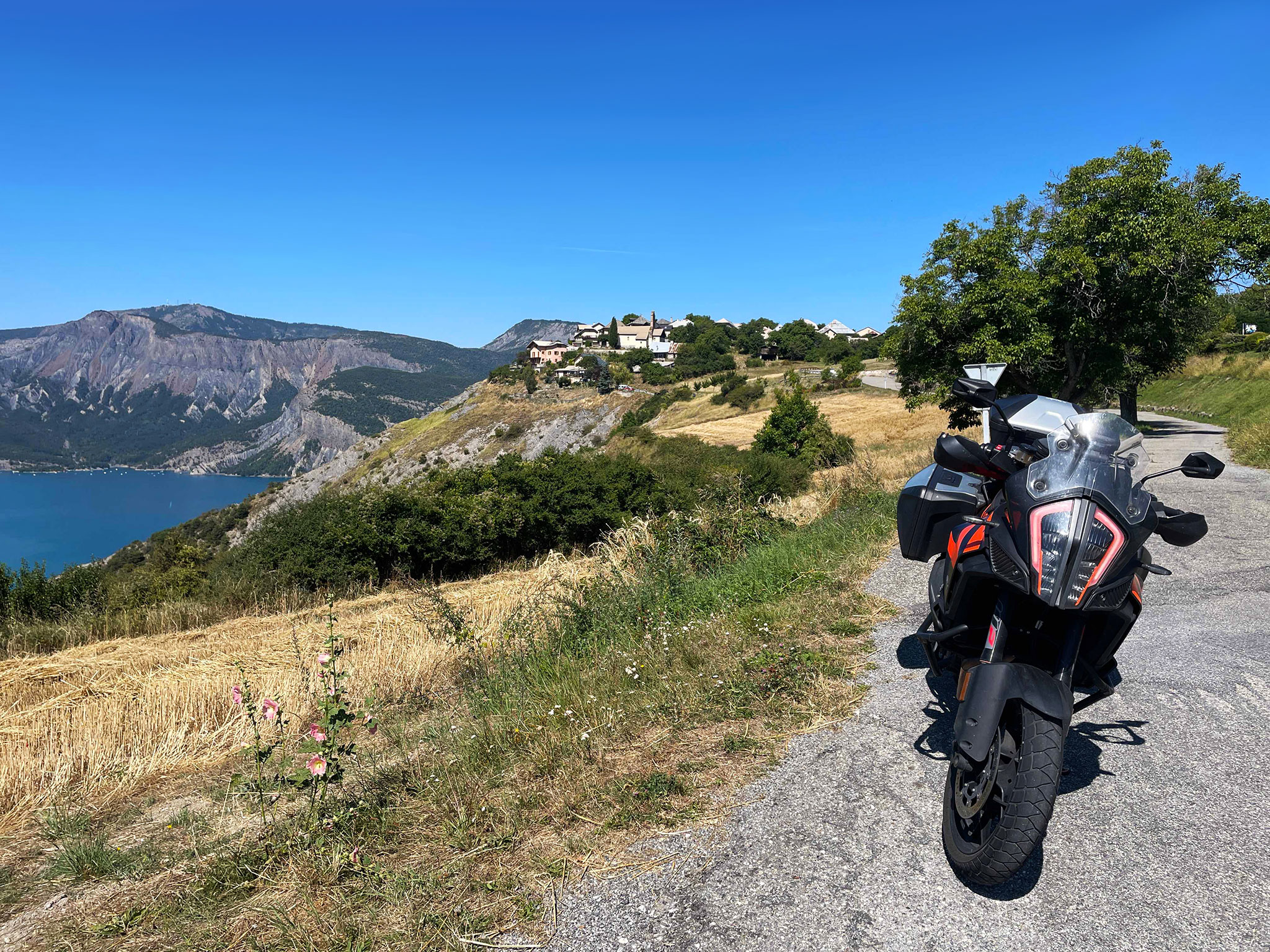 In Le Sauze-du-Lac, a commune by the lake.

The temperature had climbed above 30C. And I began to have doubts about my somewhat over-ambitions plans, sorry, “plans”. At least the part that included the Mediterranean coast, aka Cote d’Azur. 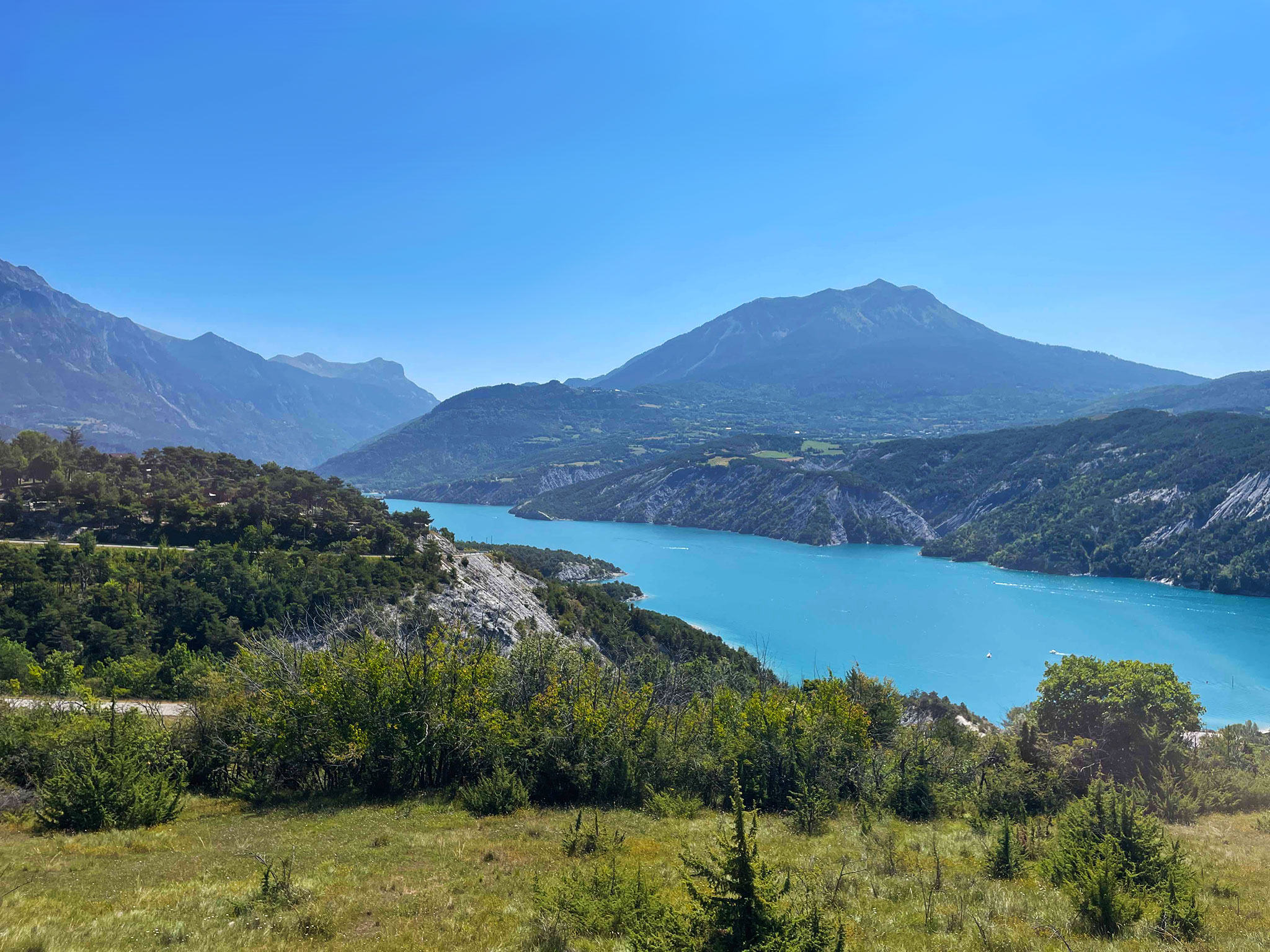 I’ll be honest say that riding in high temperatures ain’t among my favorite to-do’s. When it nears 40C it’s not fun anymore. When you open the visor it’s like having a blow-dryer right in your face. Been there, experienced that. Like once south of the Hartz mountains in Germany. But one find ways to cope with it. Staying in motion one obvious savior.

So I decided, more or less, that once I’d gotten to Gorges de Verdon, I would run for the mountains again.

Riding in France you realize how big the country really is. Glancing at a map, or a GPS, the size becomes more apparent. I had set some goals for the day. And I needed to speed up if I was to reach even some of those goals. No matter the heat, Gorges de Verdon I had to see. So I rode in direction of, and past Digne, without stopping. Just south of Digne moved onto the D907. Which leads you further south, in direction of Gorges de Verdon. 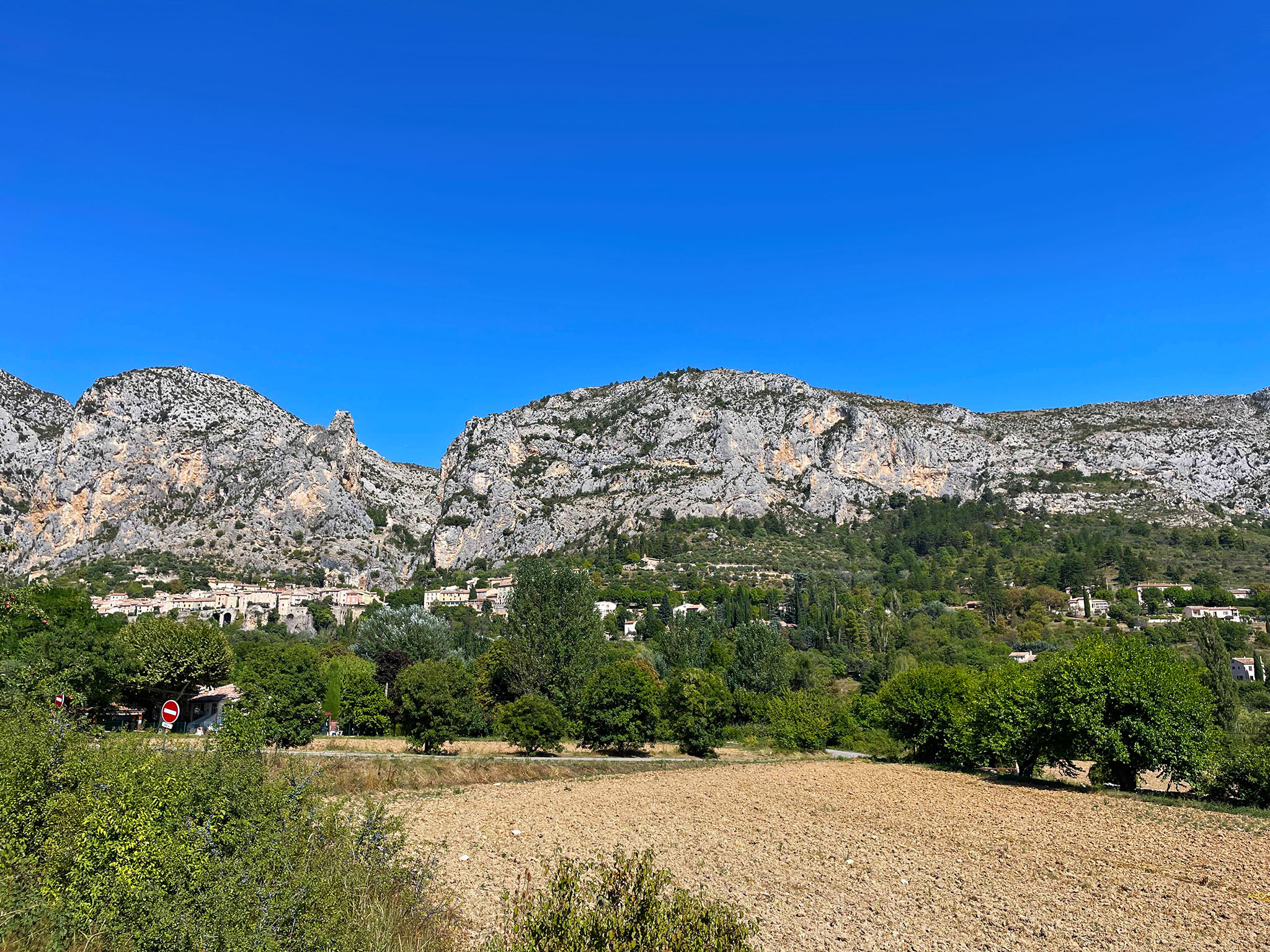 I followed this road down in direction of Moustiers-Saint-Marie (or just Moustiers). Regarded as one of the most beautiful villages in France. You find it at the entrance to Gorges de Verdon. I rode past it. In hindsight I should perhaps have stopped. But the day had drifted into afternoon and I was on a mission. 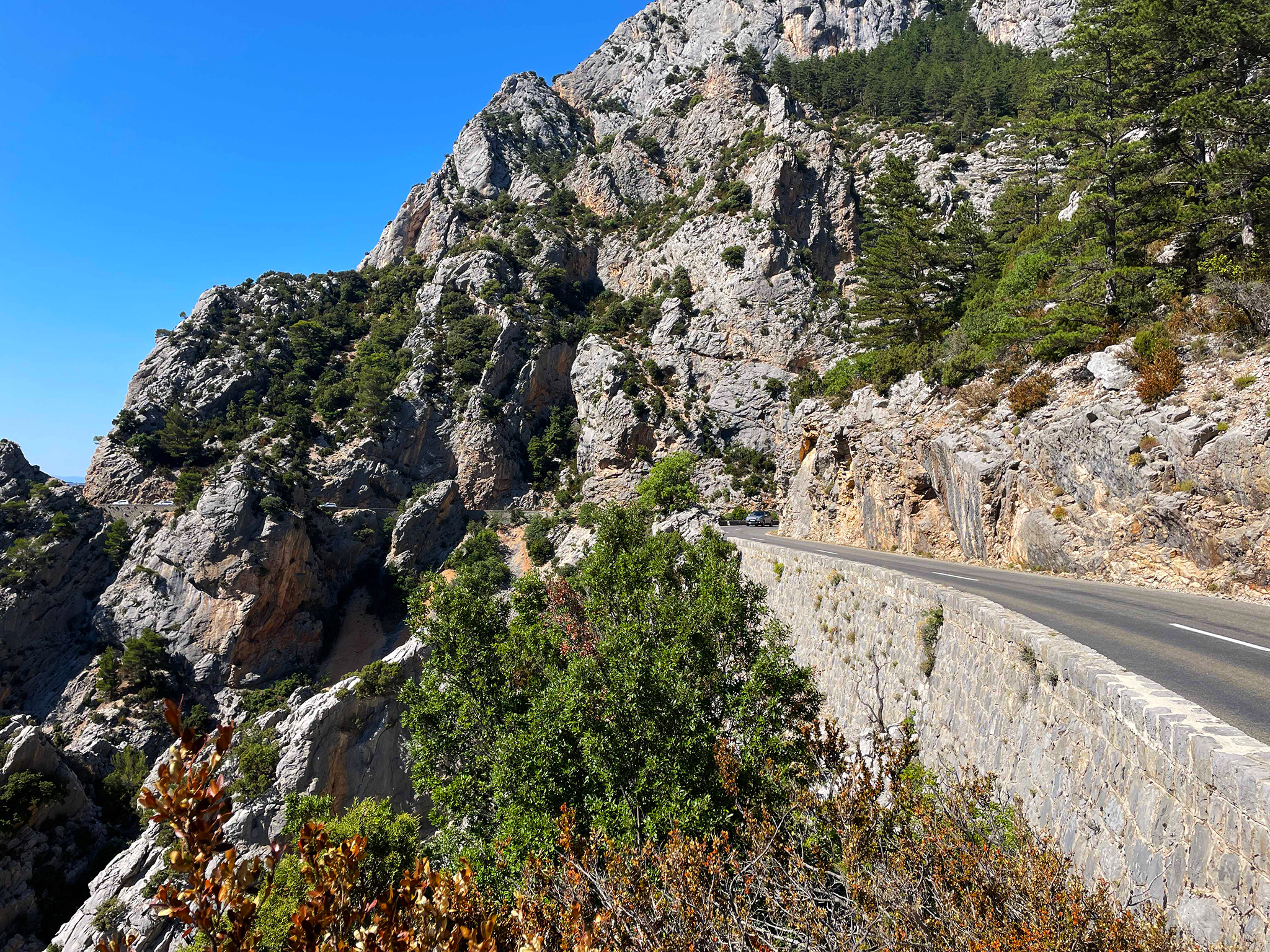 As it would turn out, a mission to get stuck in traffic. Because of tourists urge or need to see every rock, nook and cranny in the gorge, people were driving spectacularly slow. No one had regards for potentially overheated motorcycle riders. And as a result, I didn’t stop half as much as I wished to for pictures. 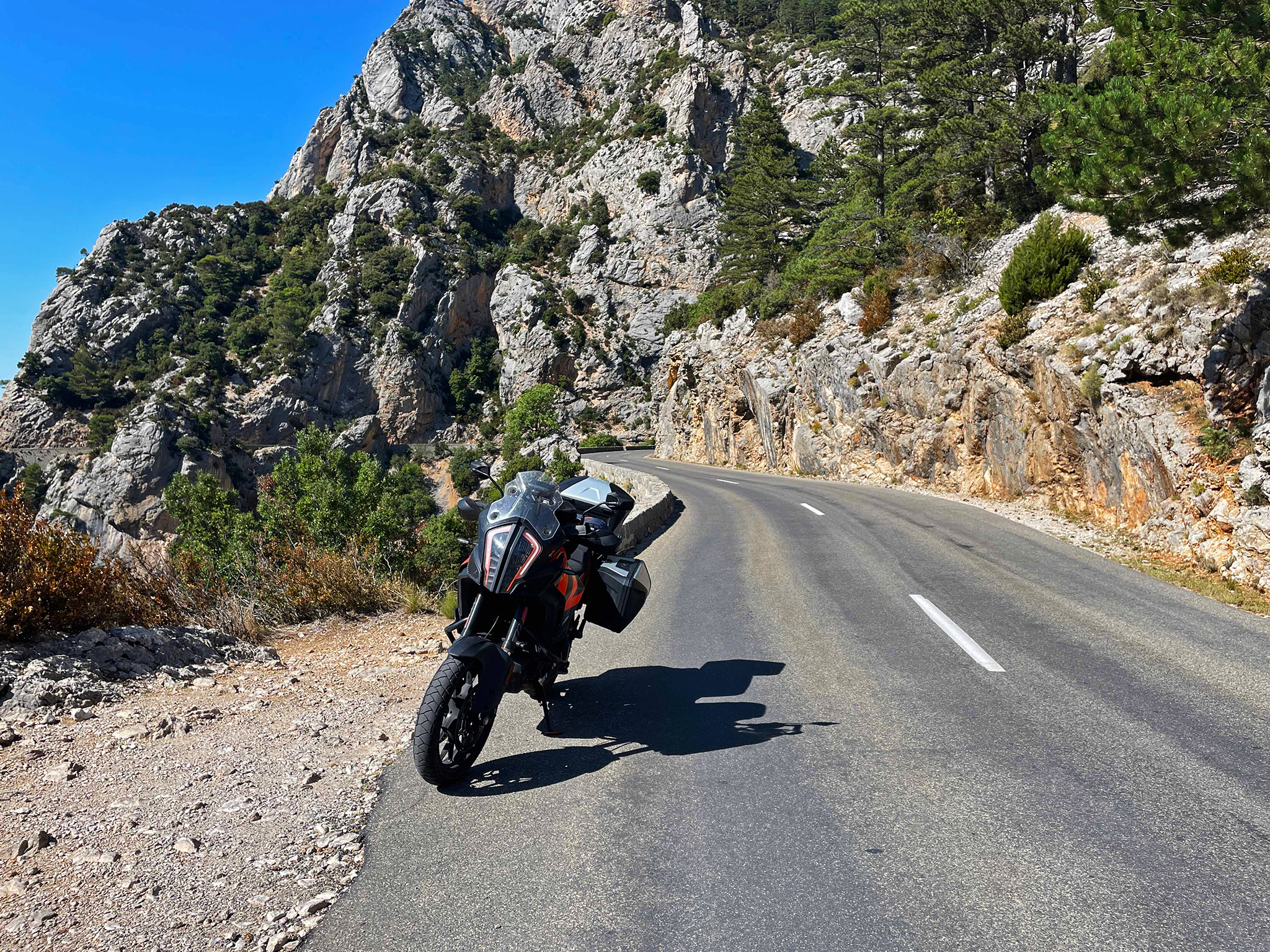 Stopping only meant that all the lane splitting, and overtaking of pedestrian drivers, would have been for nothing.  As a result I made few stops. From a motorcycle riders perspective I must admit I’ve done more exciting things. But well, there we are.

A little later I left the natural park and continued north. 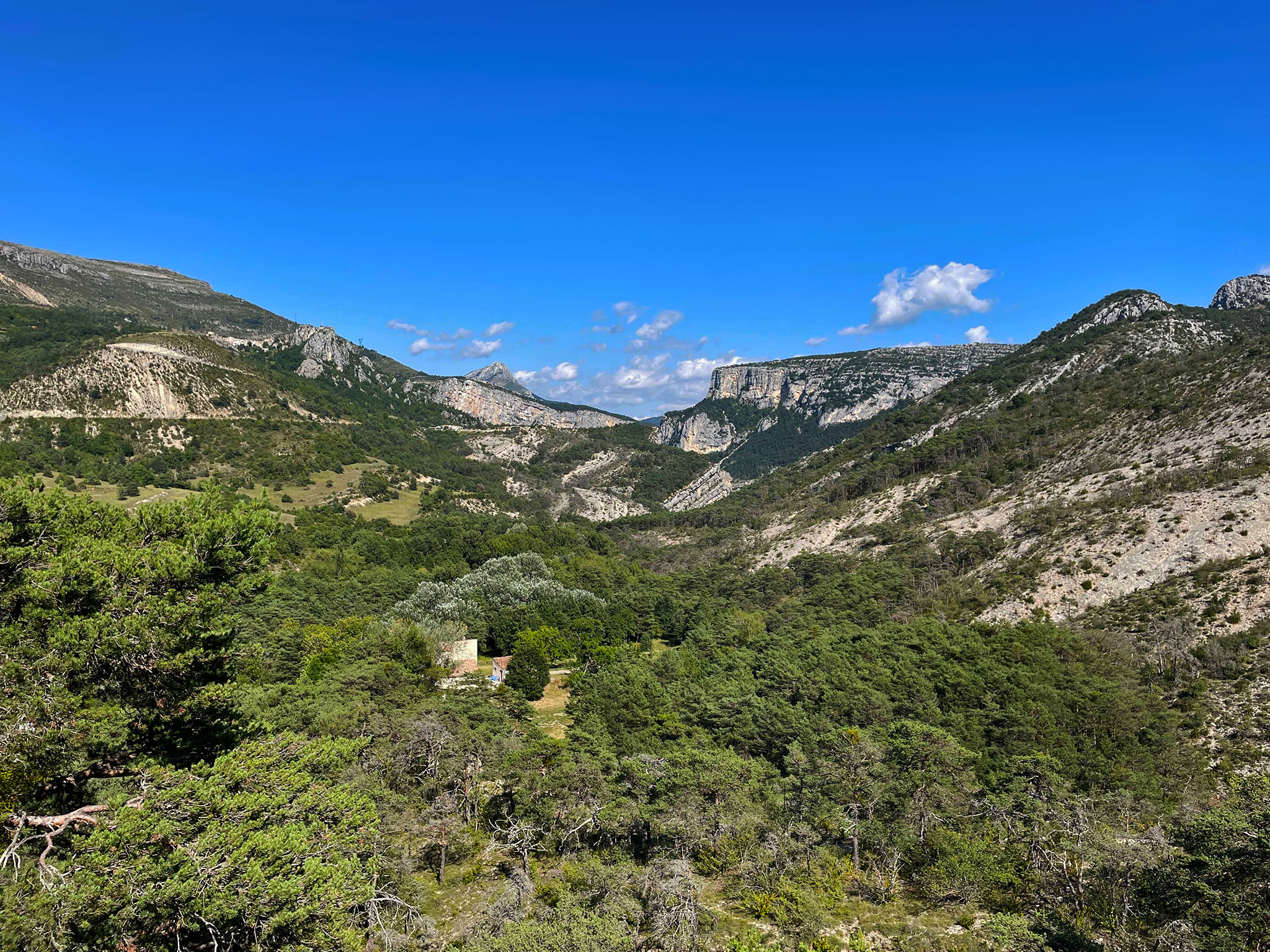 Past and through Gorges de Verdon, La Palud-sur-Verdon.

From Gorges de Verdon to Barcelonnette

Afternoon became evening as I azrrived in Val d’Allos, a ski resort with nothing interesting to see. A coffee and a little rest, then it was back in the saddle. I hadn’t decided on where to stay. Looking at the map I realized Barcelonnette was not far off. 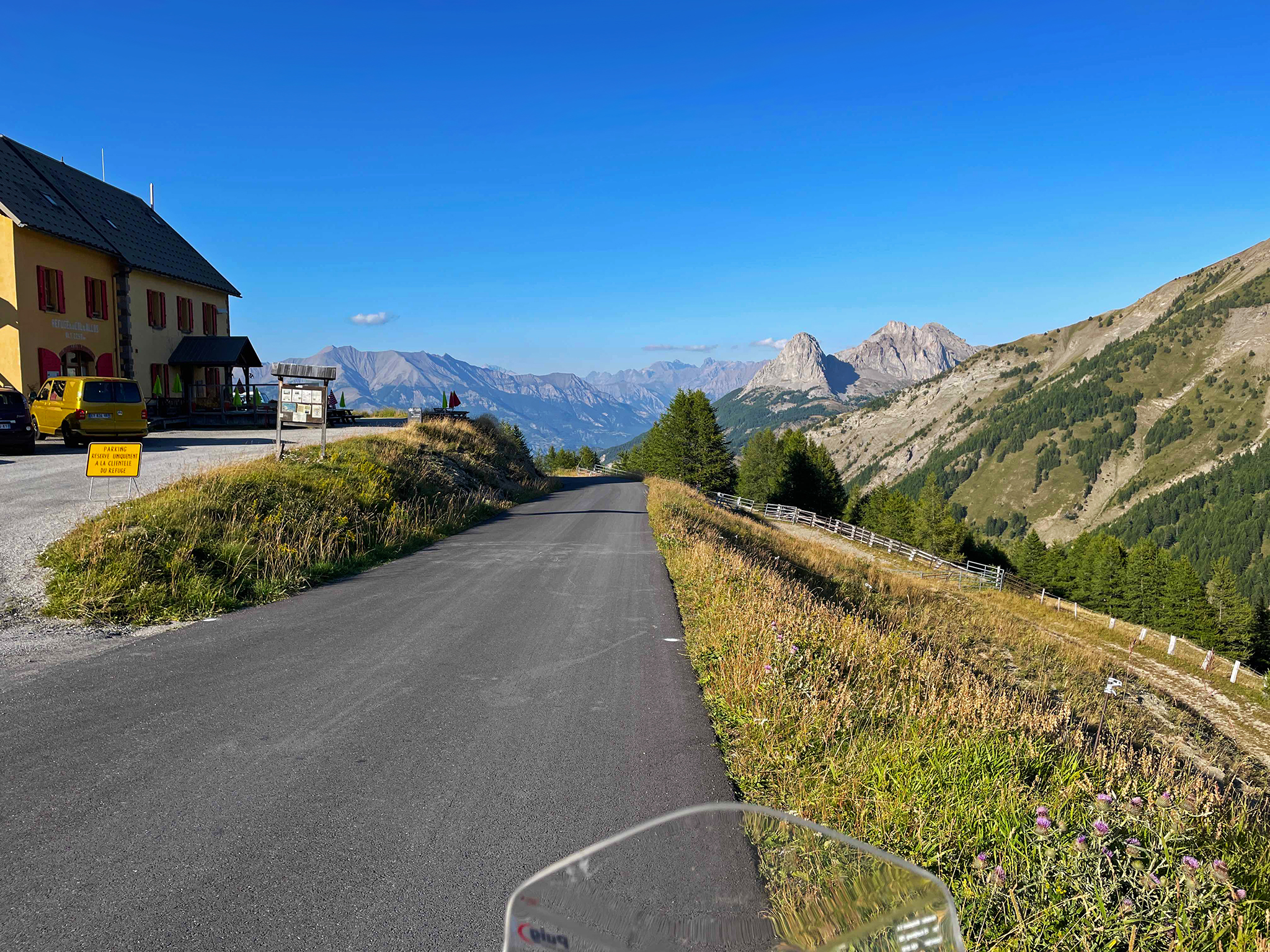 Past Col d’Allos and Refuge du Col d’Allos the temperature fell down somewhere in the pleasant mid-twenties. This is where a more interesting section of D908 begins. Primarily because of twists and turns. 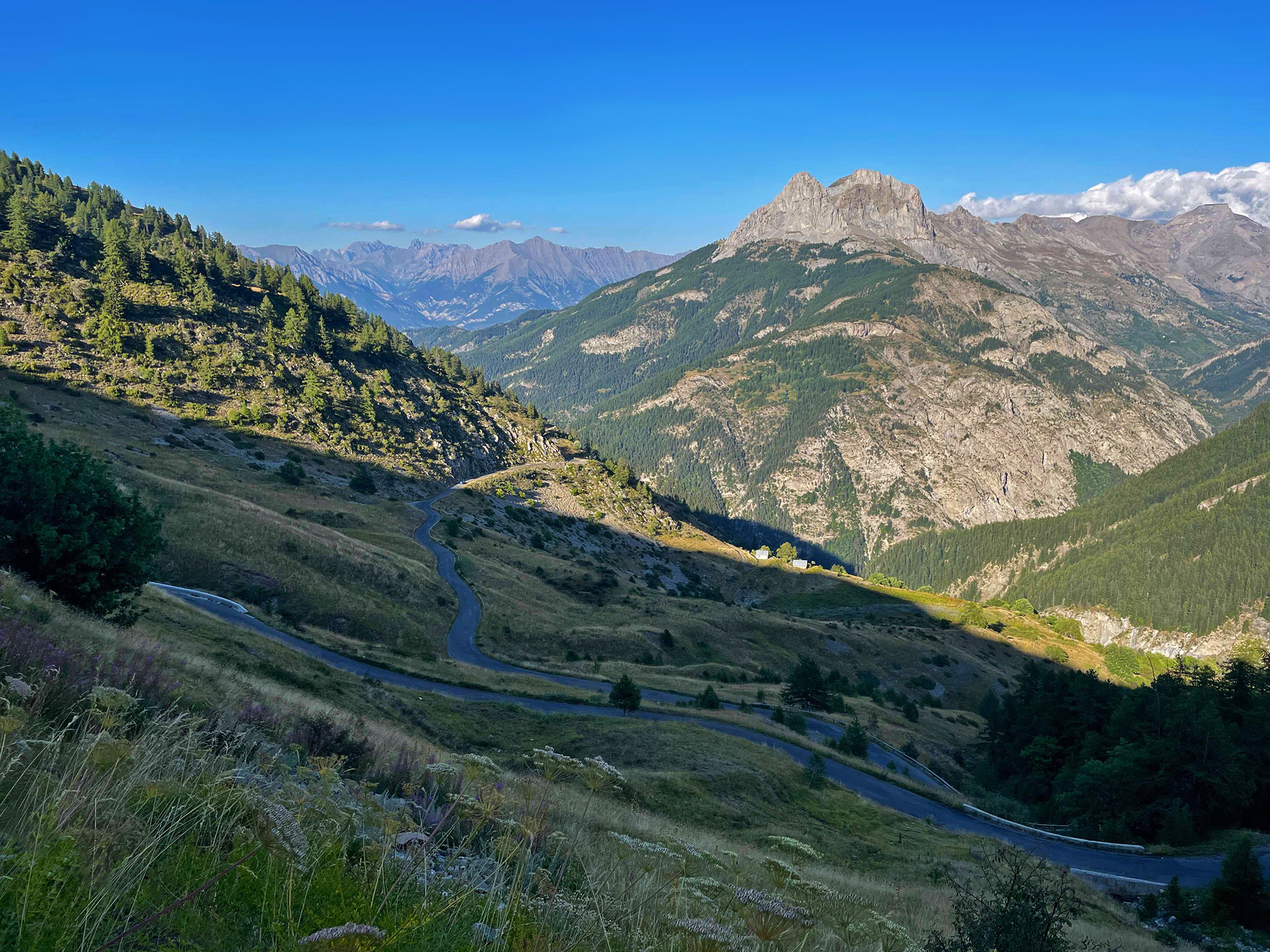 Road D908, looking down towards Les Agneliers. Also the road to Barcelonnette.

Because of this, it’s a heavenly road for motorcycle riders. But I saw few of them on the way down. Arriving in Barcelonnette I drove into the city center. Where I found a hotel. Decided to try some ninja booking for once. 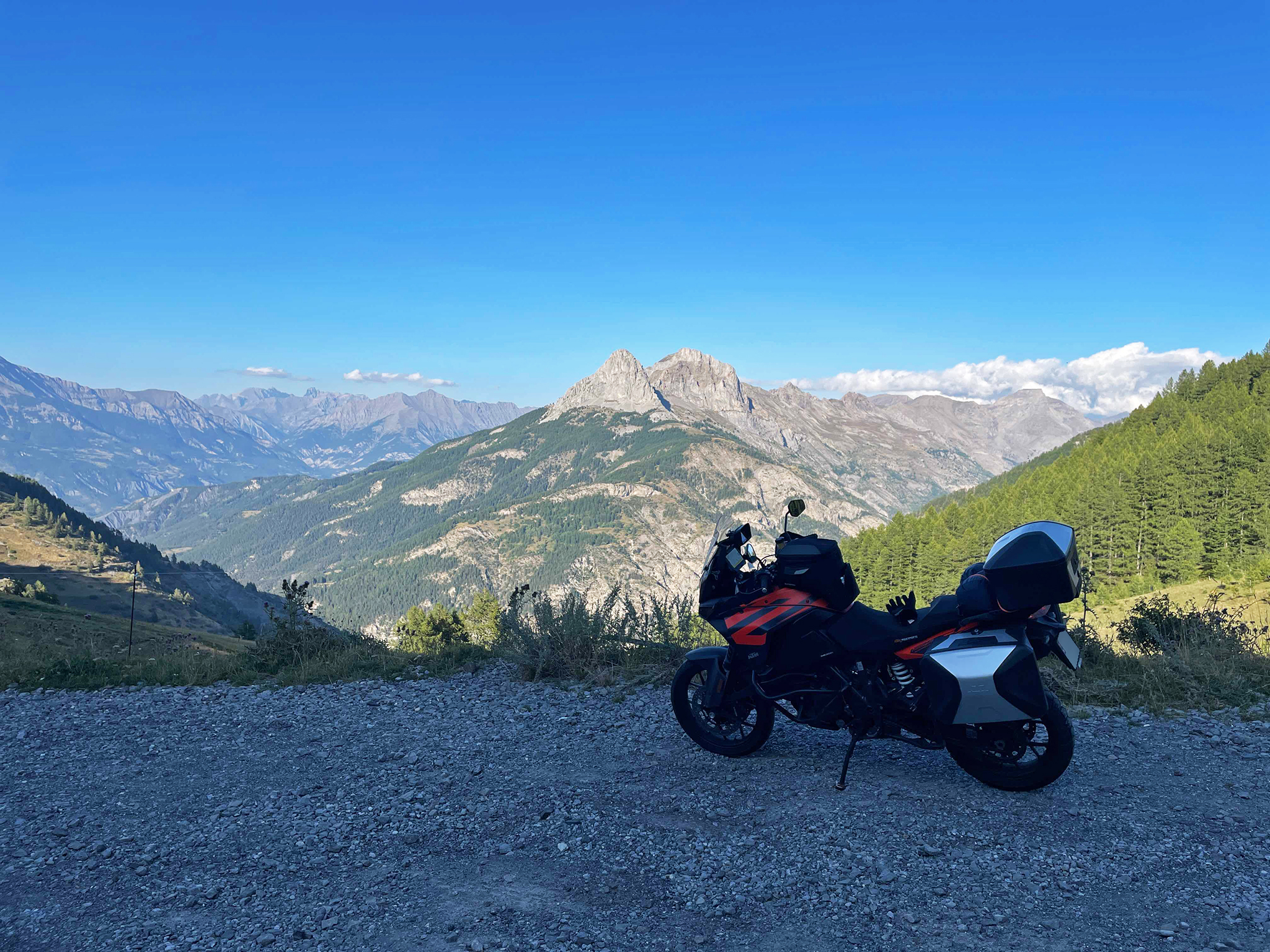 Half an hour later I had the bike parked in a garage belonging to the hotel, and found myself a place to eat at the city square. It had been a long day. Below the map, with most of the route, and then some. 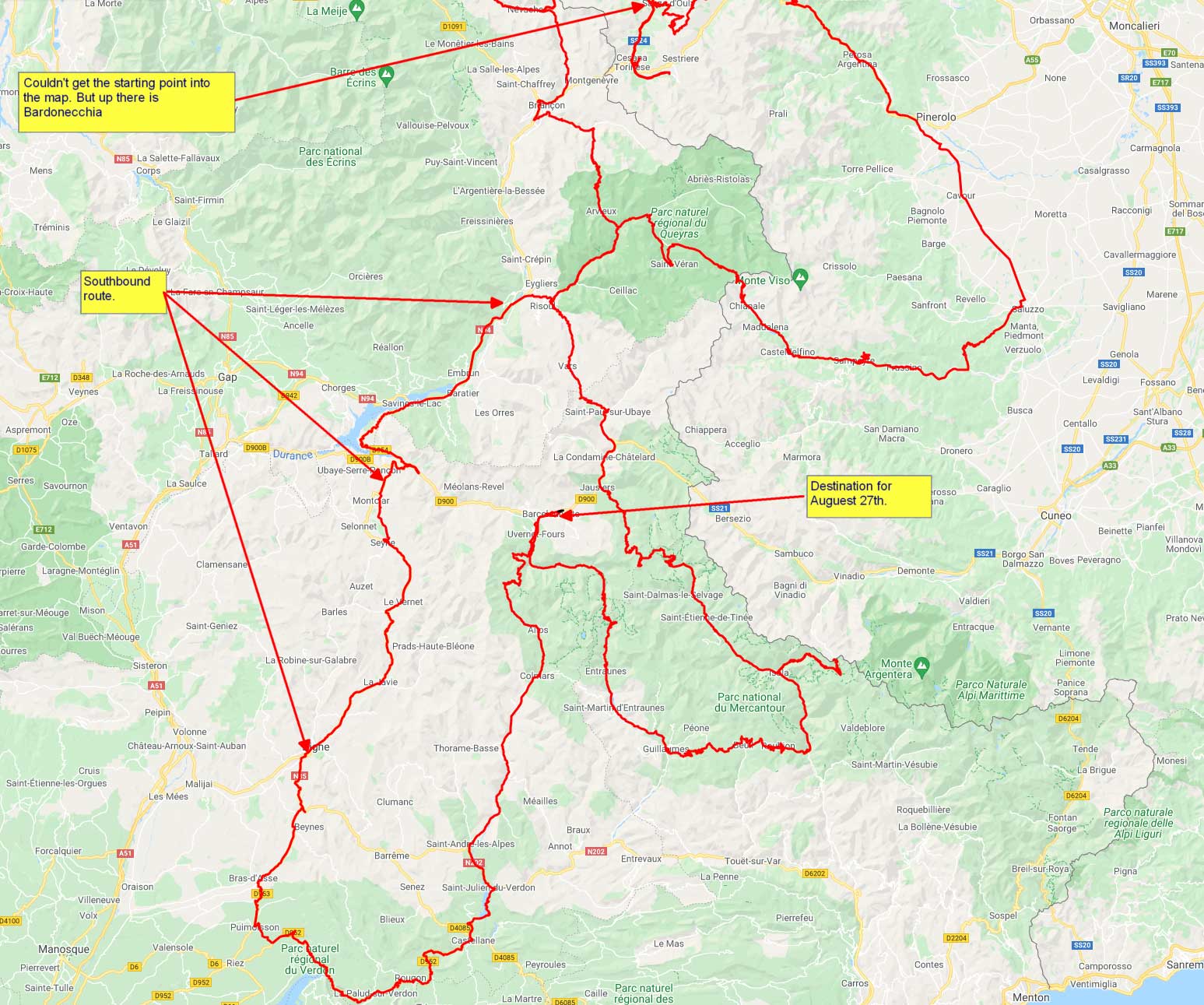 Most of the route for Auguest 27th, and some of the following day