Going east never was a part of my plans. But as the weather forecast brought news of a heatwave in France I had to, regrettably, drop the French Alps.

Sometimes in life, well maybe a little more often than sometimes,  things don’t turn out as you’d hoped.  When it happens one just have to improvise, wing it, go with the flow, take things in a stride. Sulking won’t help the least bit!

Finally it was boarding time, or ride-on time. While train is underway you simply hang out together with fellow bikers. 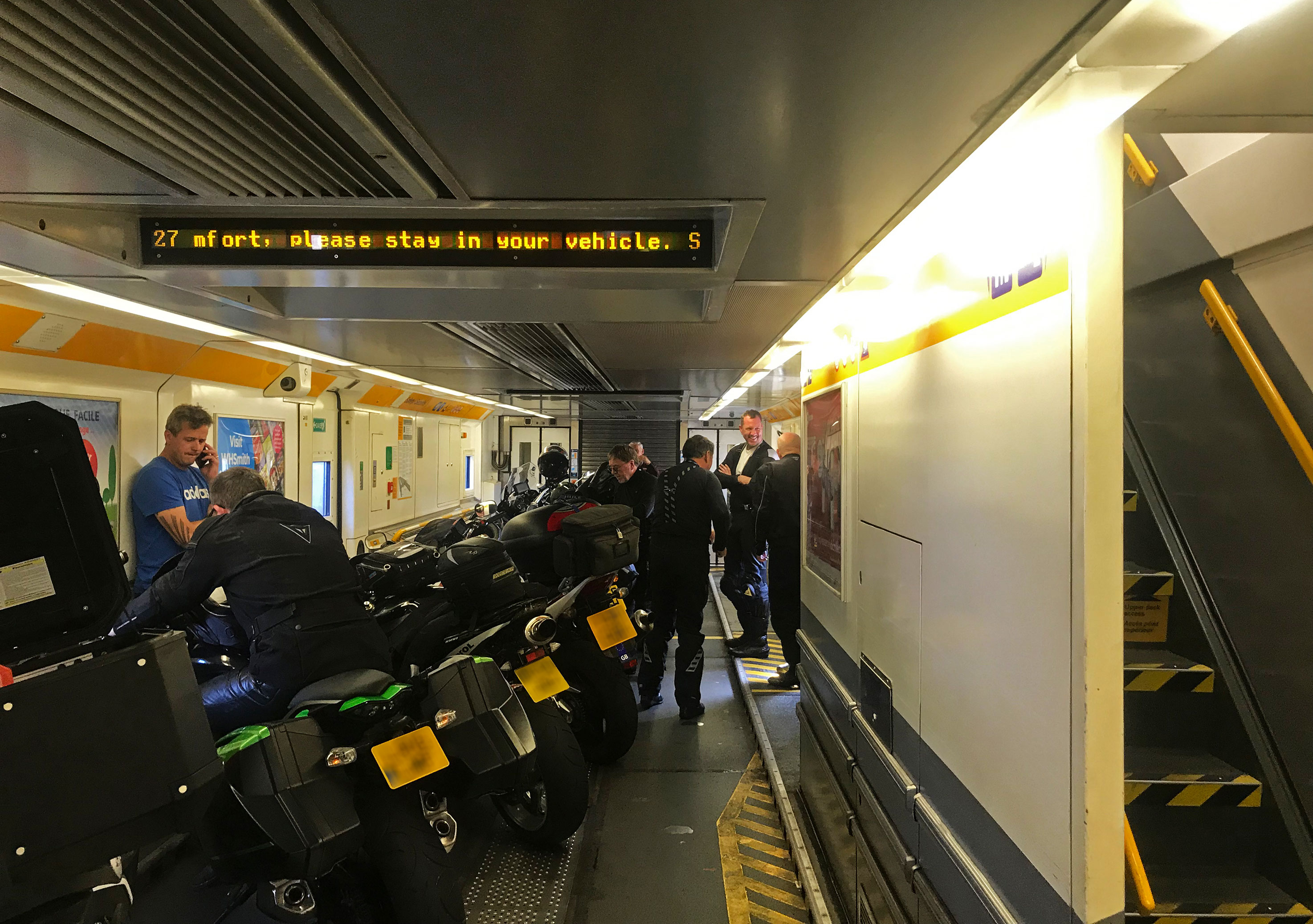 On board Eurotunnel to Calais, France

It’s a brilliant concept and it only takes around 38 minutes from Folkestone to Calais, France.  The ride was, if not silky smooth, a least so smooth I hardly noticed any sideways motion of significance. 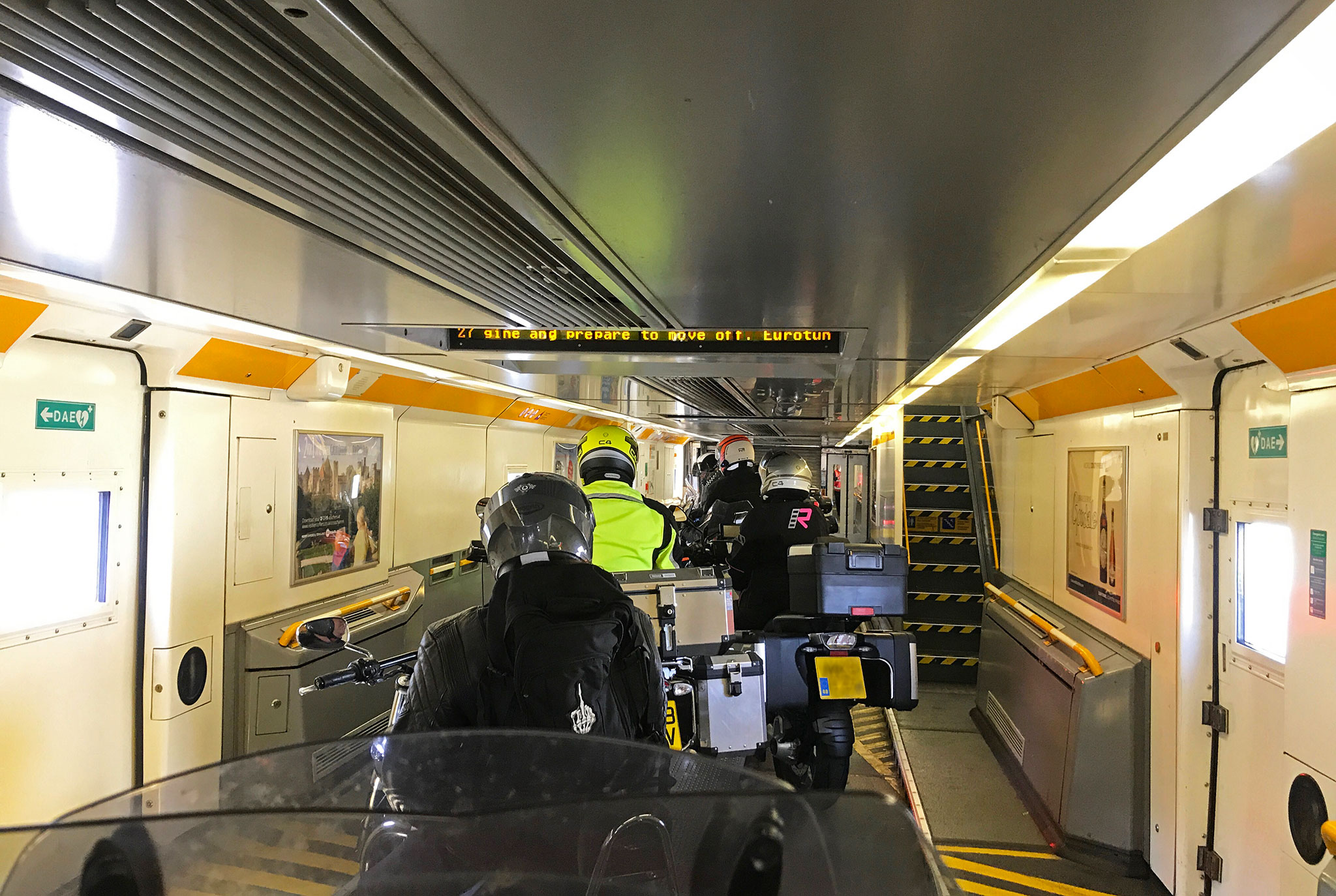 Lined up and ready to get off the train

Time to ride off, which was as easy as getting on. I wonder how things will be post-Brexit. The swift train exit might deteriorate into a customs SNAFU. Who knows. From the train station one quickly gets on a freeway out from the terminal area.

I took the road up to Dunkirk, never been there before. So I rode through the town and down to the beach. 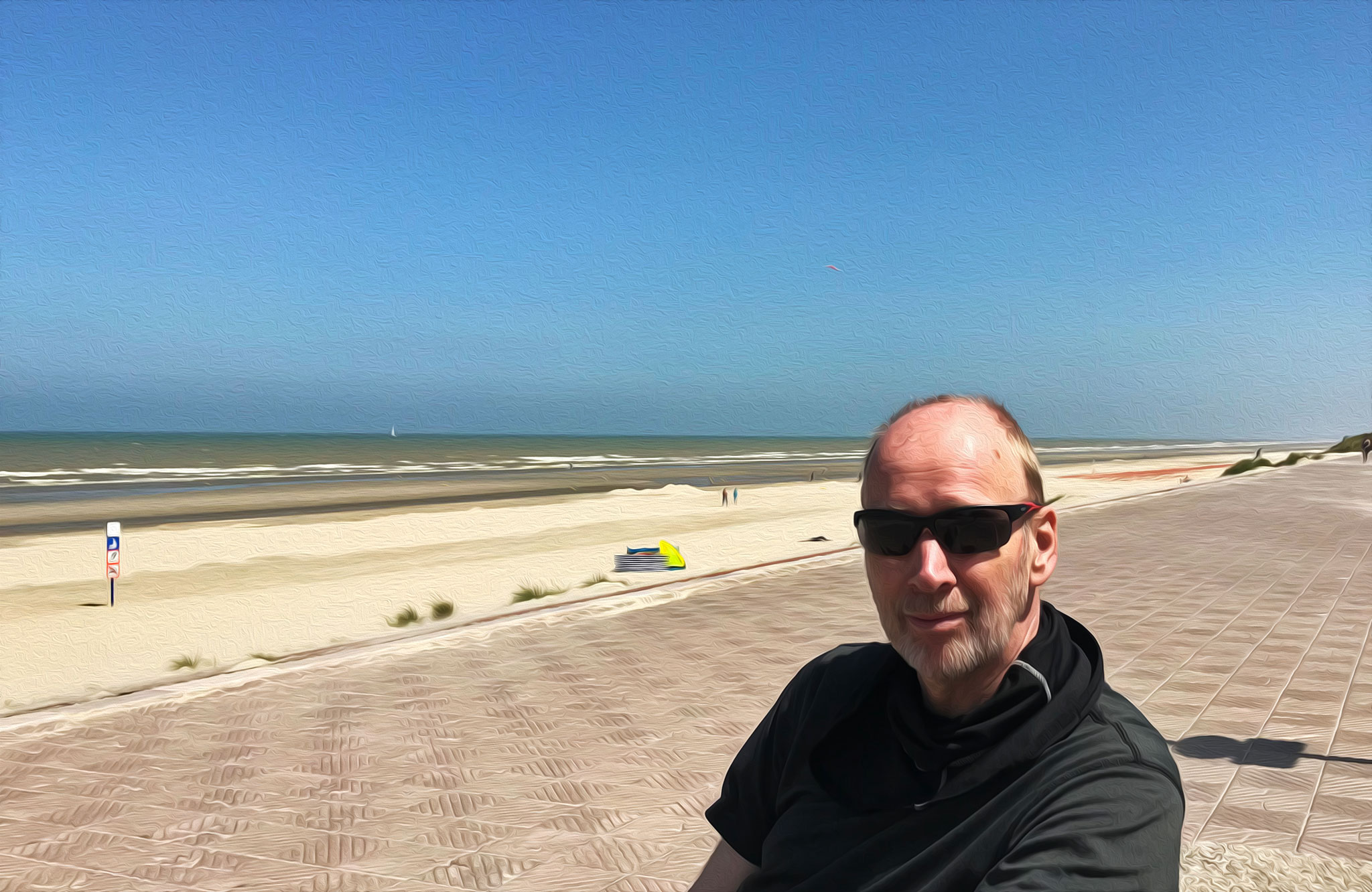 The temperature was climbing, fast. Stopping down by the sea seemed a good idea, with cooling winds.  I had to make a stop anyhow, to consider the next leg, where to ride, and what route to follow. 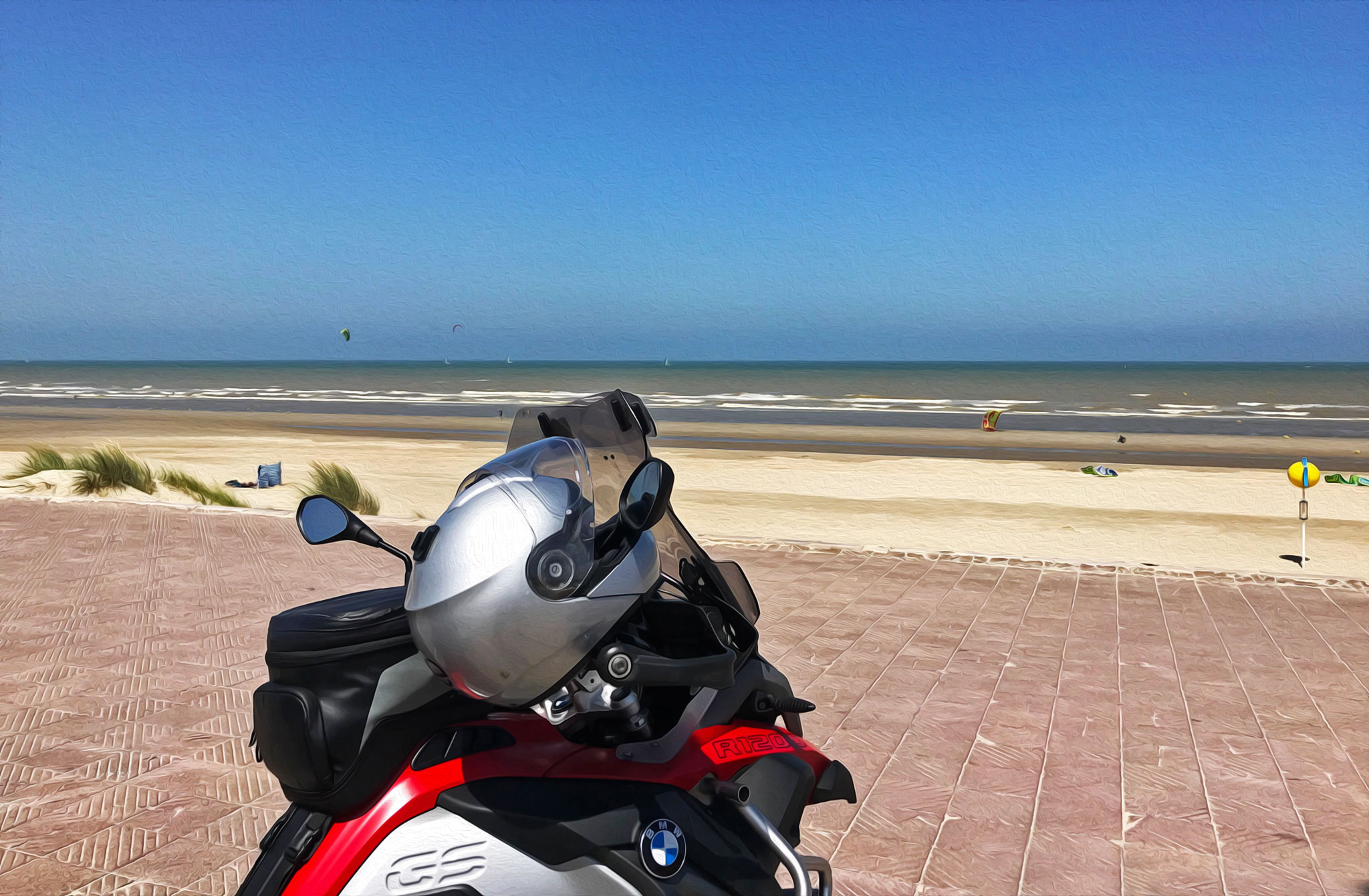 Down by the beaches of Dunkirk

Decisions had to be made. The weather forecast was bad news with regards to carrying on southeast, through France. It was extremely hot along my route, and that supposedly would last for days. With max temperature above 45C. Some places even hotter.

Tried to look for alternative routes, neither of which seemed to make much difference.  Via Switzerland would not help either. In the end choices were, riding southeast in Sahara like temperatures, or abandon plans. Disappointed I chose the latter.

The summer adventure of 2019 got an earlier start than in previous years. In the hope that I’d avoid too high temperatures and heavy rain.  I’ve had my share of both on earlier Euro-rides. But June 2019 was yet another statistical anomaly. Next year departure will be in July!

Going east to through Belgium

I had some alternatives, an it was too early starting the journey back north to Norway.  Going east, across Germany to the Harz Mountains seemed a good choice. A friend had suggested Harz, it sounded like a good backup plan. The forecast indicated high temps there too, but nothing like in France.

Thought about it for a few minutes, made a decision and hopped on the bike.

From France into Belgium along E40, first north, then southeast towards Ghent. Just outside the city I stopped for a quick, simple lunch. 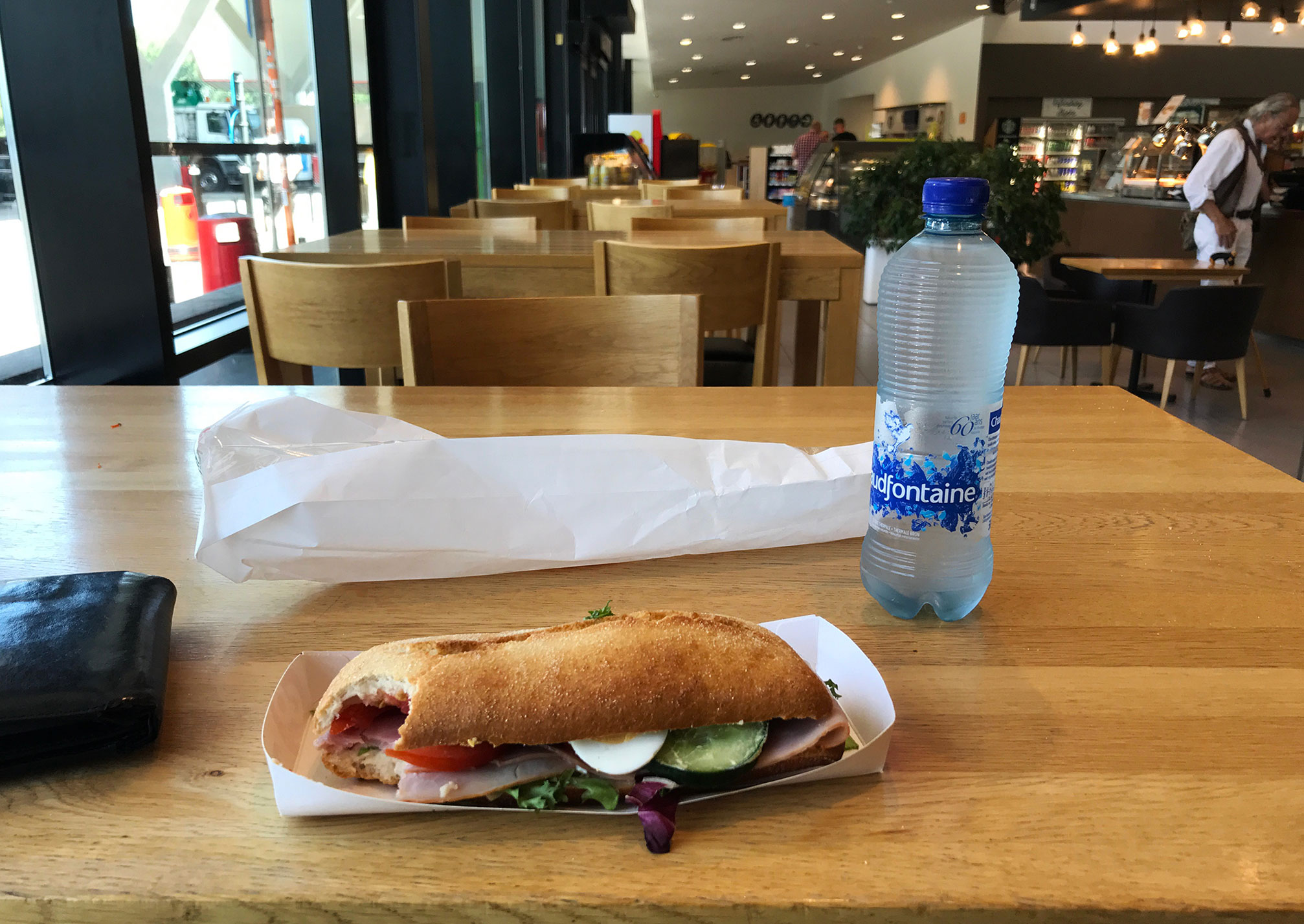 Lunchtime in Belgium, along the A40

Past Ghent the temperature was climbing fast but at freeway speed ventilation is ok. Mesh jacket and pants also helps a lot, IMO an absolute must have on summer rides in Europe.

As I got closer to Brussels the traffic got denser. Suddenly it came to a grinding halt. The only thing to do was lane splitting. Turned out to be the longest lane splitting ride I’ve ever done on a motorway.

A little closer to Brussels the reason for the congestion revealed itself. Looked like a bad traffic accident. Lots of police cars and ambulances. Passing it it things started to loosen up. Outside Leuven I switched over to the E340 and kept going east, towards the German Border.

Approaching Aachen I decided it was enough Autobahn riding for the day. So I took off in direction of Aachen.  Time for a latte and hotel searching. A good alternative showed up, only minutes away. Got a great deal via booking.com so I booked it. 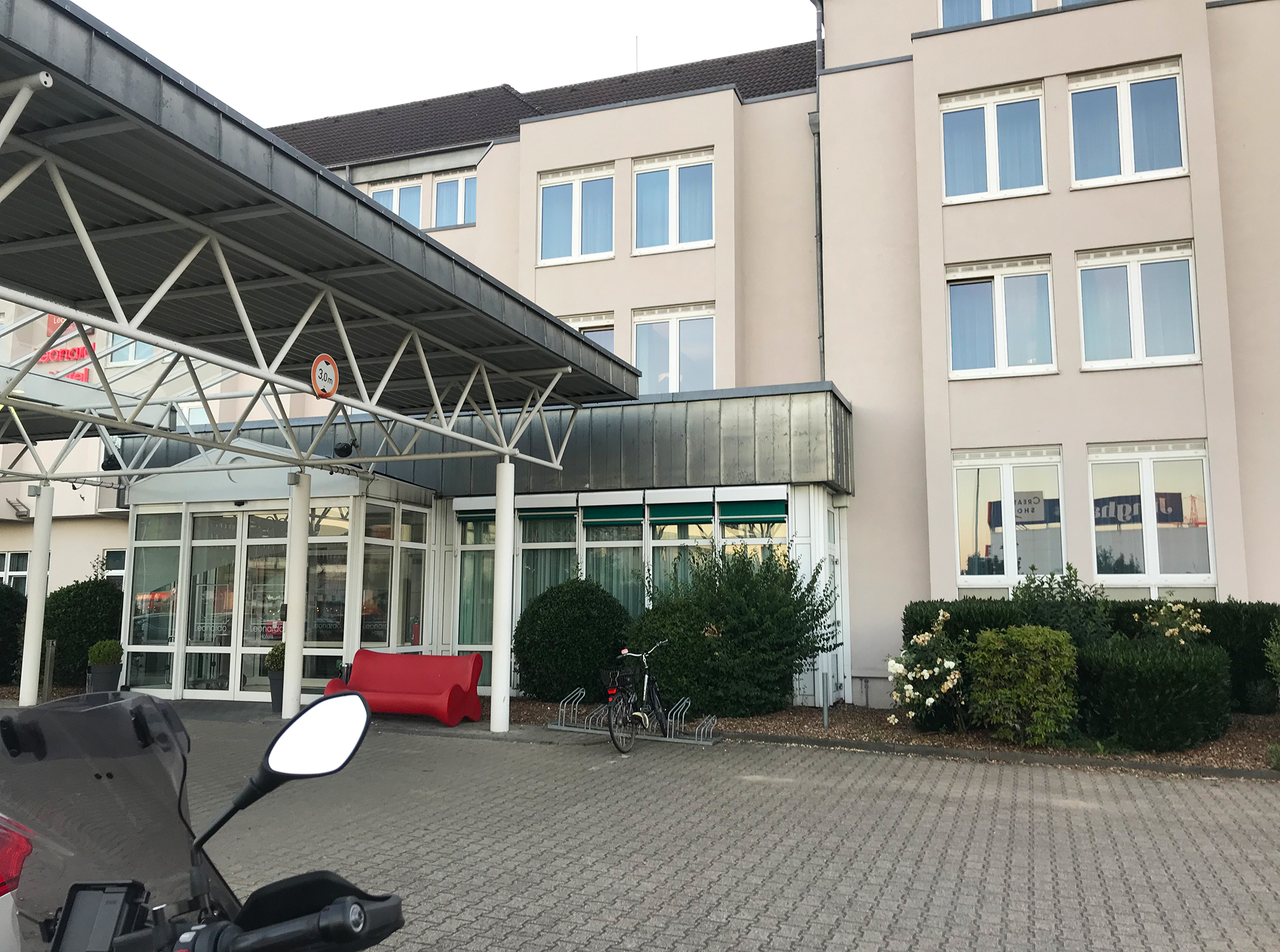 Leonardo hotel Aachen was indeed a good choice.  Didn’t look like much on the outside but it was a pleasant experience.  Got a huge room with good atmosphere . Totally ridiculous that a hotel of that standard could cost less than the hotel in Folkestone. 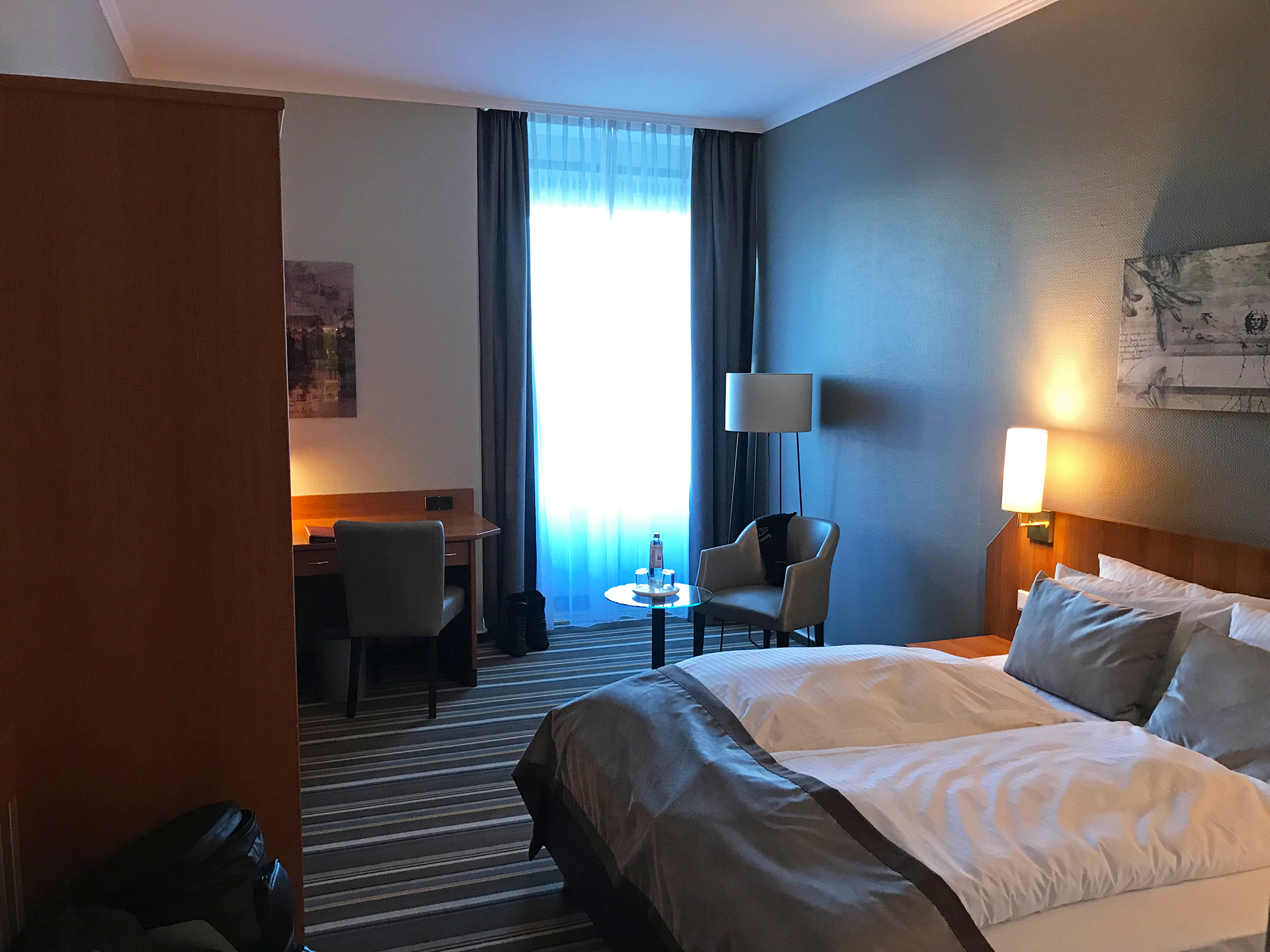 Twas time for a shower, then some food and a couple of pints. Which I enjoyed on a terrace at the back of the hotel. One thing was certain, I was going to stay off the Autobahn as much as possible the next day!

Below the boring route of the day. 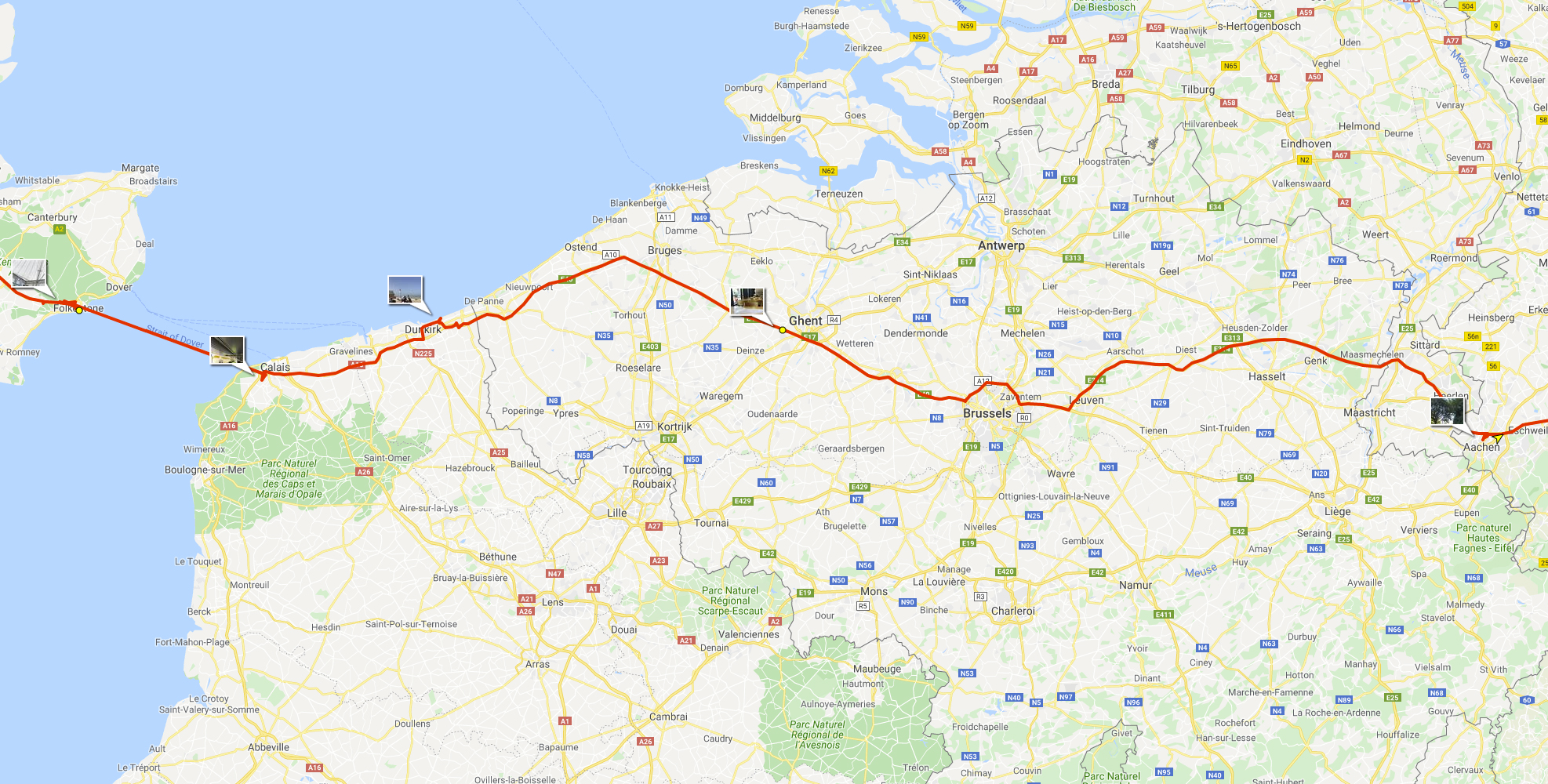 Going east: From Folkestone to Aachen