August 28th became the day of the five passes.  A long day, a pretty long ride. But what does that matter when you’re in the French Alps? 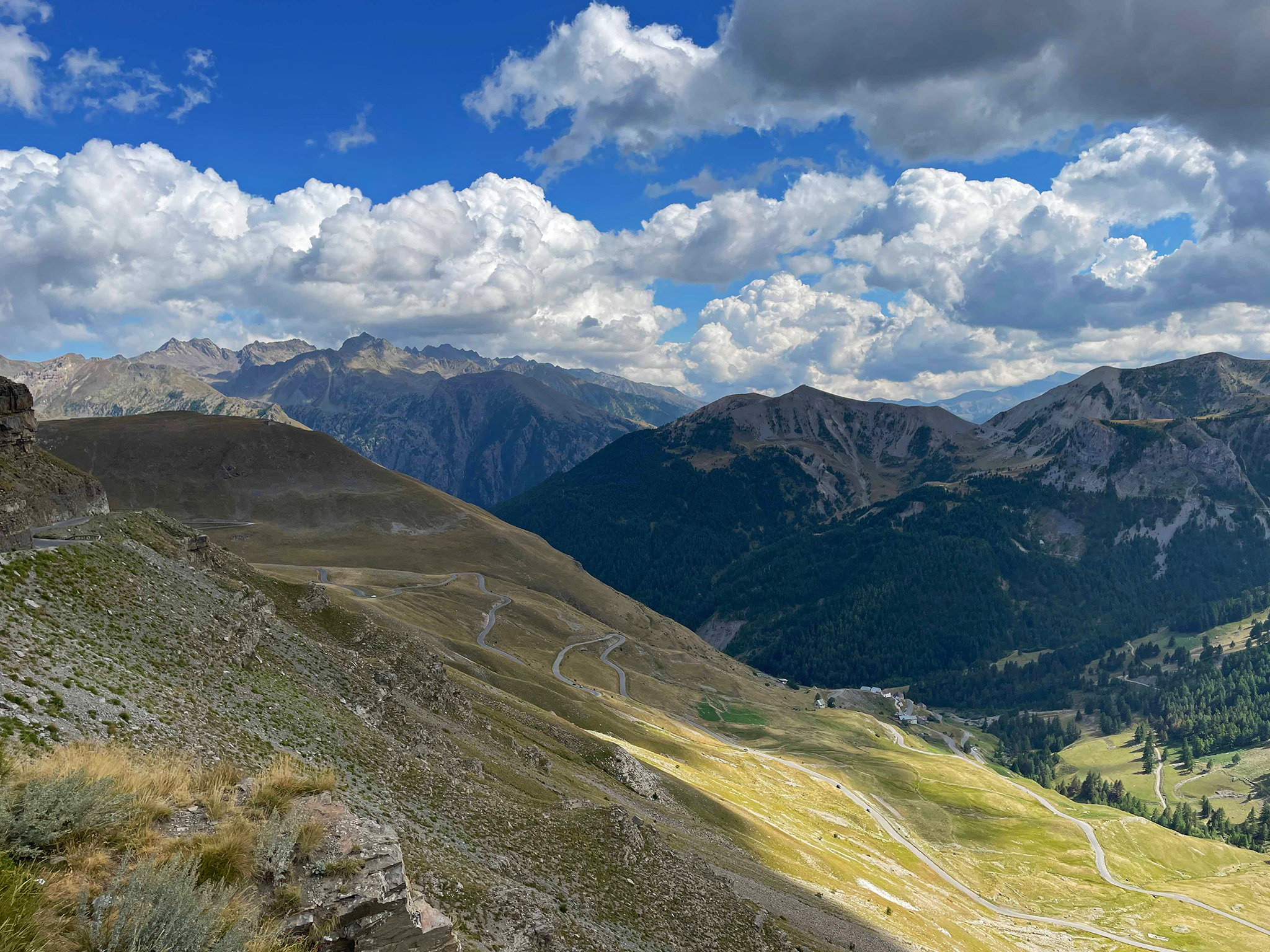 As I got started in the morning, nothing was planned. Well, I had a couple of passes on my list. But nothing definite. And absolutely no idea about where I would land for the night. This is, in my book, a good thing. Too definite plans gives little room for improvisation. And improvisation is for me key when on a motorcycle adventure.

After a quick breakfast in Barcellonette and packing I was ready to go. But where to? Since decided on a more northern course I’d miss out on several passes. But still, from where I was, there was plenty of roads and passes.

Ended up taking the 902, due south. To the commune Guillaumes, then pass Col de Cayolle. I’d read about Col de Cayolle but didn’t know much. Getting there was an experience. 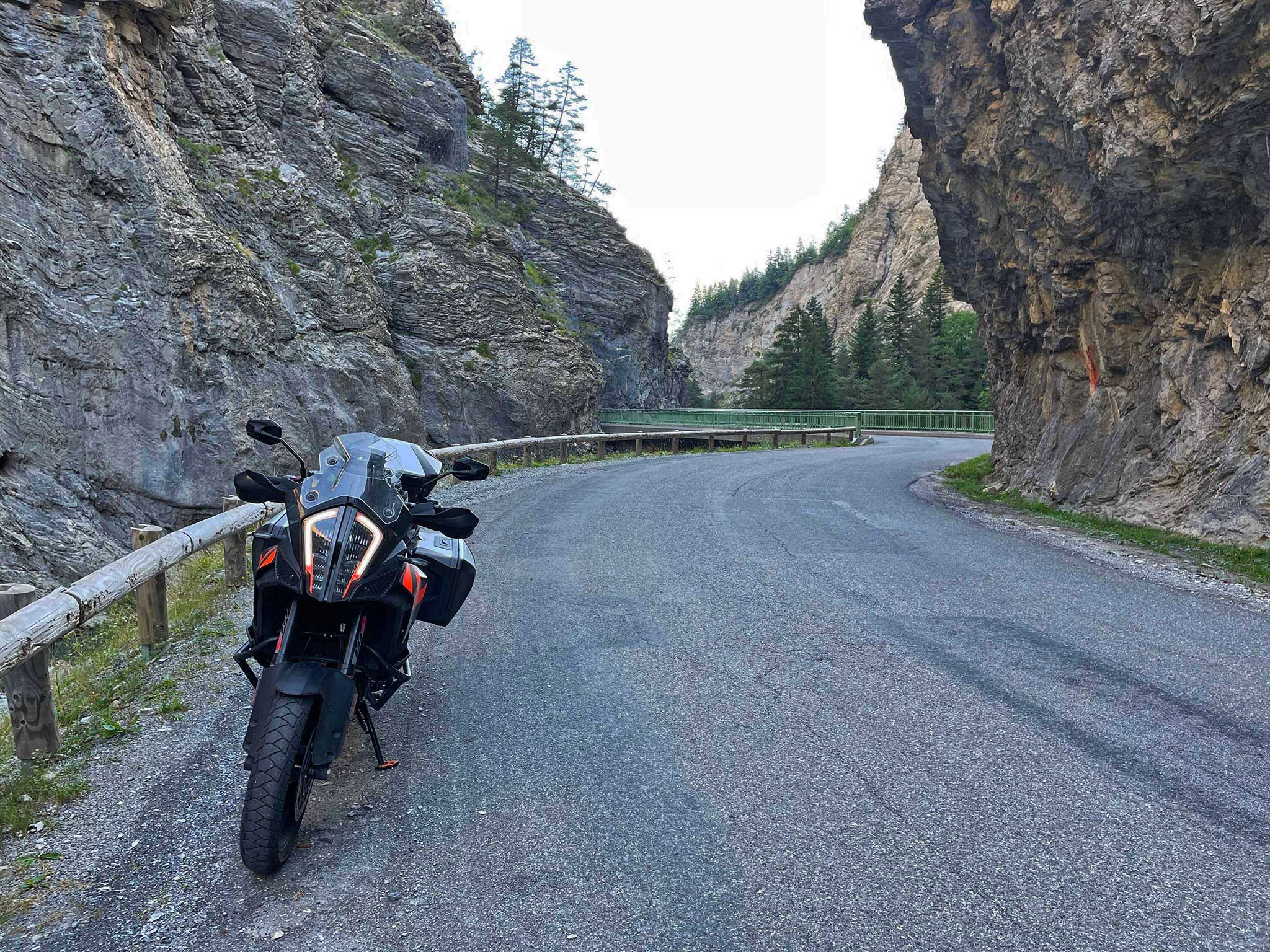 Along D902 in direction of Col de Cayolle, France.

D902 runs through ravines and narrow valleys. At the beginning not much elevation change. But as you get closer to Ravin de l’Aiglière and Ravin de l’Eschillon the climb begins. The nature and road is, simply put, stunning. 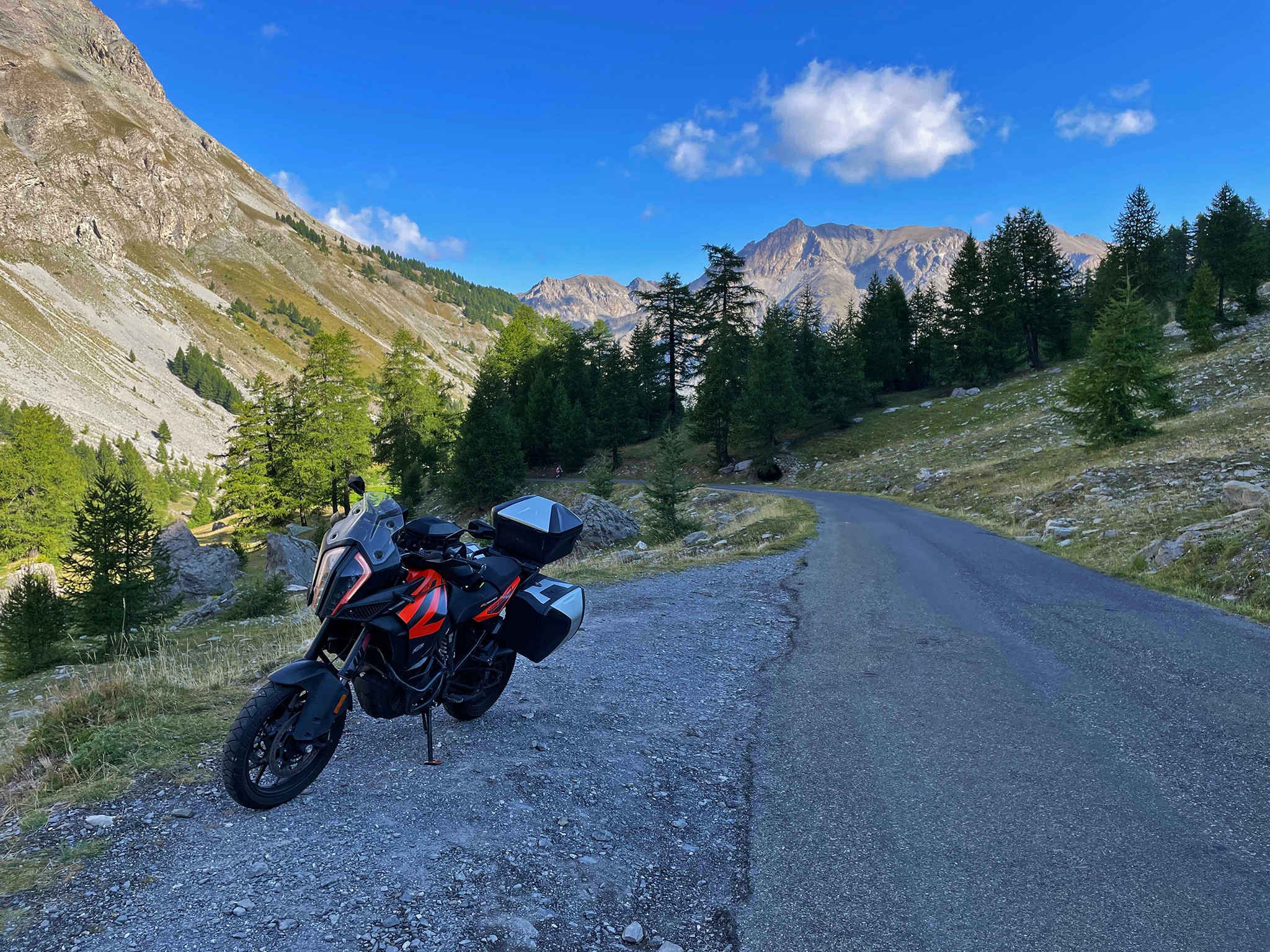 Being a Norwegian I’m pretty used to great nature experiences. But France and French Alps is something else. Those weren’t few the times I had to stop and take it in, with mouth halfway open. Considerable wow-factor here! By the way, D902 near the ravines is much steeper than it look in the pictures. 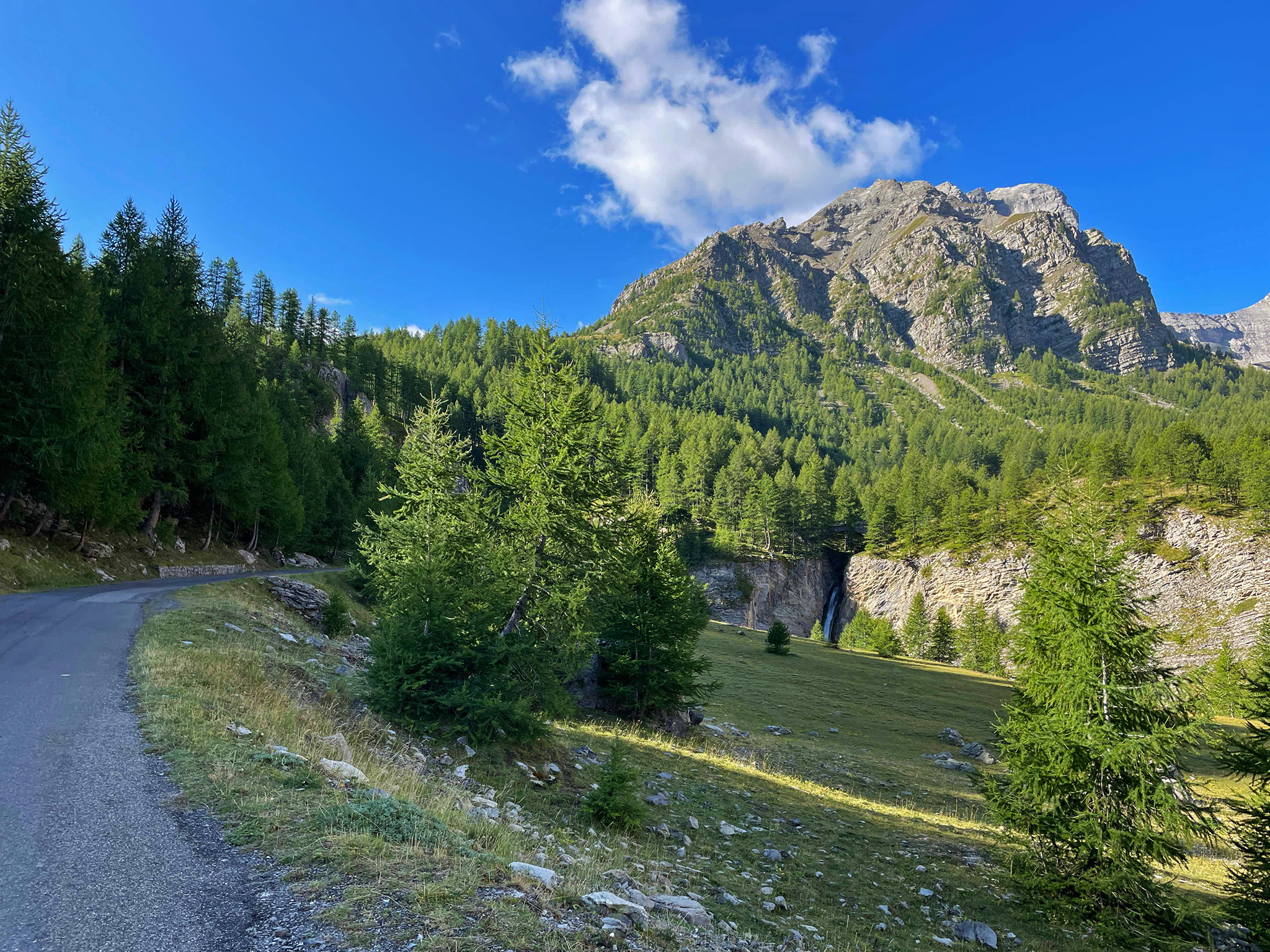 D902 and particularly the section closed to the ravines, is brilliant. The whole area is brilliant, not very populated. Maybe because of Corona, but there were few people around, and few motorcycles or cars. It could also be because I was riding up early.

If you ride a pass, in any country, during high season,  be early! 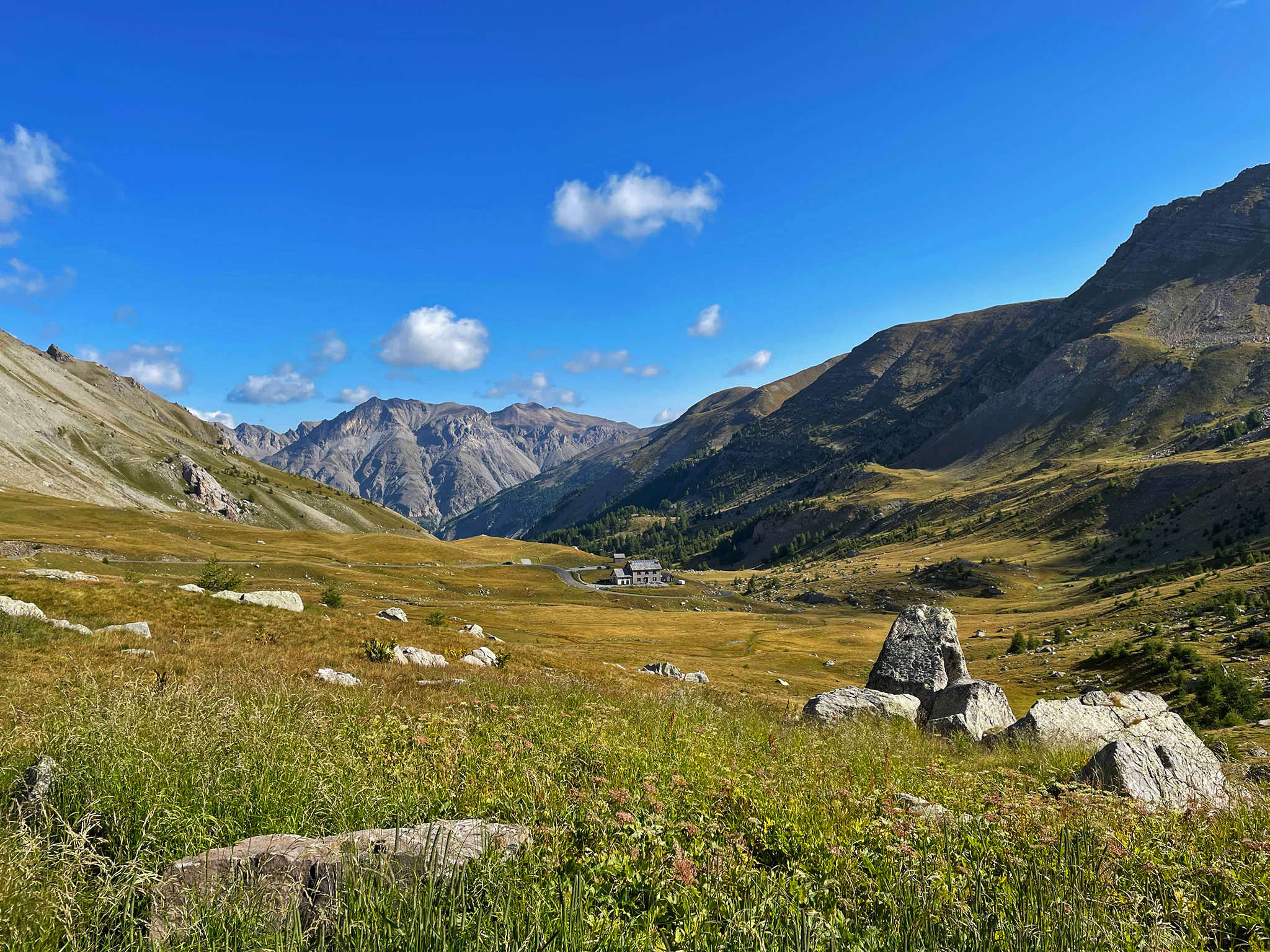 Soon enough I was above the tree line, approaching the pass. Stopped to take yet another picture, down towards the ravines.  Mentioned before, a “few times”, the nature is breathtaking. Reflected once again on how different the French Alps are, from any other Alpine region.

The French Alps have become a favorite of mine. Some places and regions more than others. 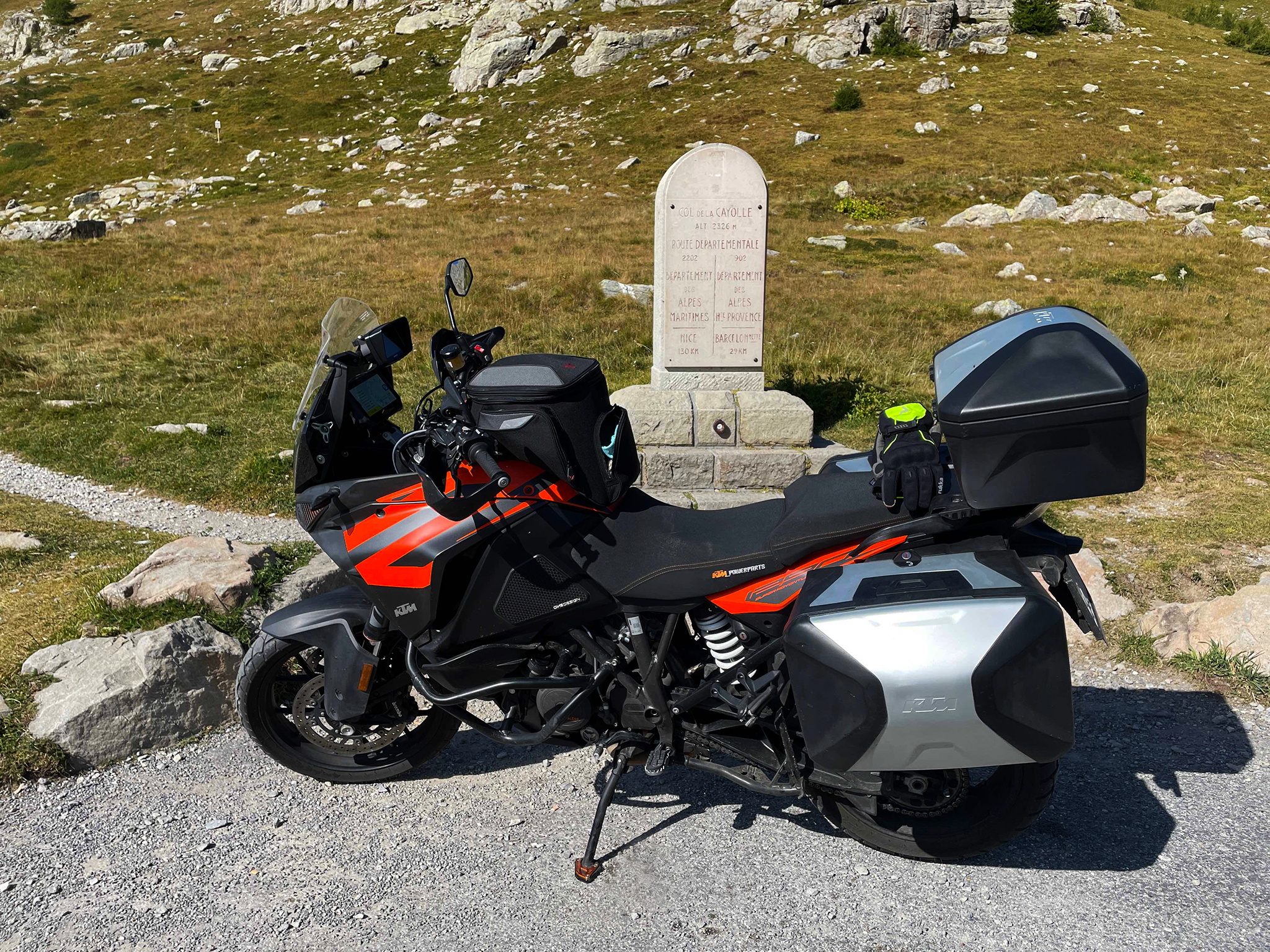 Shortly after I reached Col de la Cayolle. A no frills pass with only the obligatory bauta you find on many passes in the Alps. No cafe’s, no restaurants, no shops, and no toilets.

As you begin the descent on the other side of Col de la Cayolle, the road has changed name to D2202. And a whole different view opens up. I never cease to be amazed, and as much mesmerized, over the variety of vistas or views. 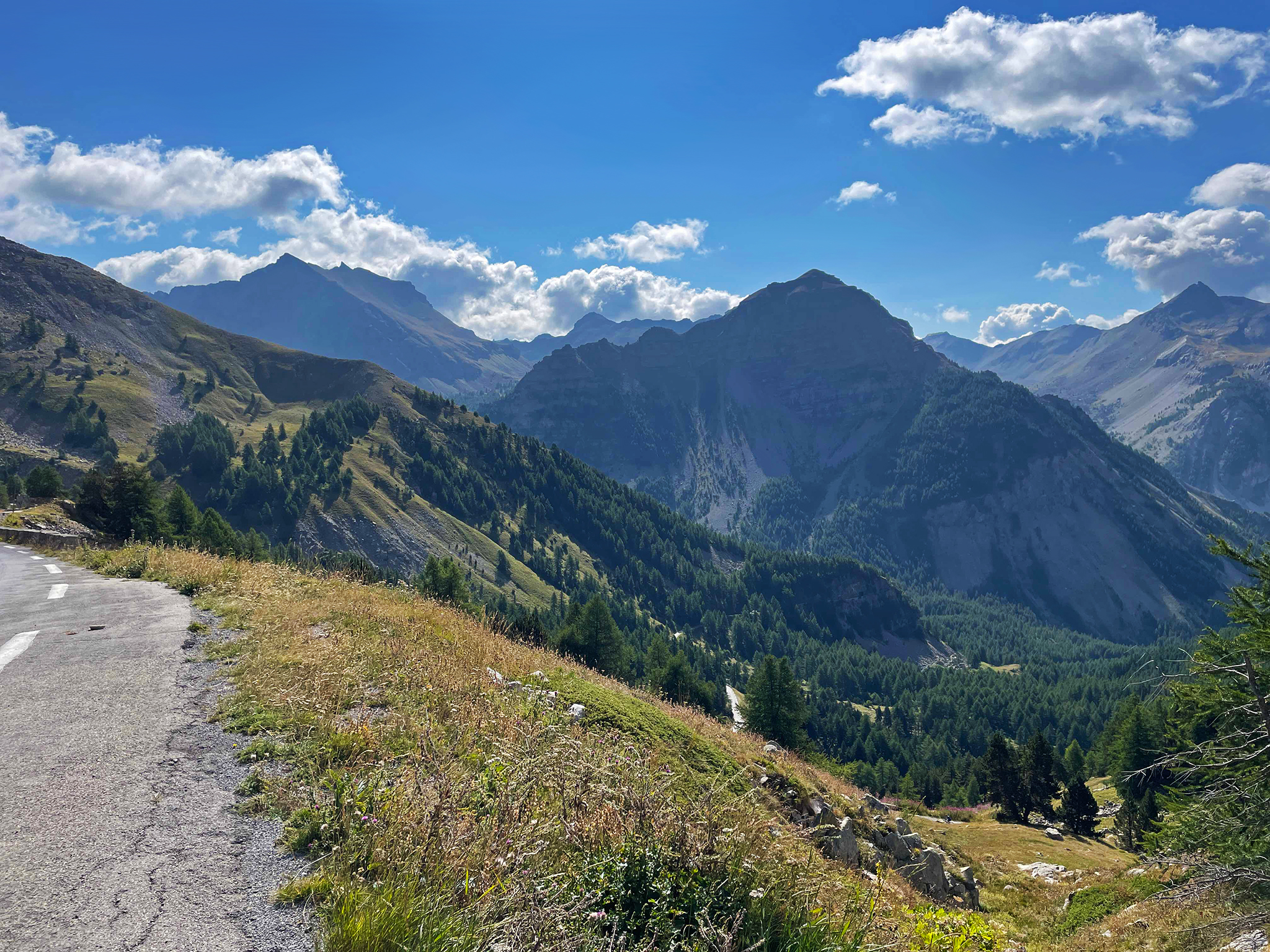 I had to stop multiple times on the way down, to take pictures. You know how it is. Or maybe you don’t. Some of my friends gets a little annoyed, sometimes. But, for my defense, I collect moments. Pictures makes and invokes, memories.

It’s difficult to decide which to use, or not. So I’ll add them all later to the Summer Adventure gallery, on this page. 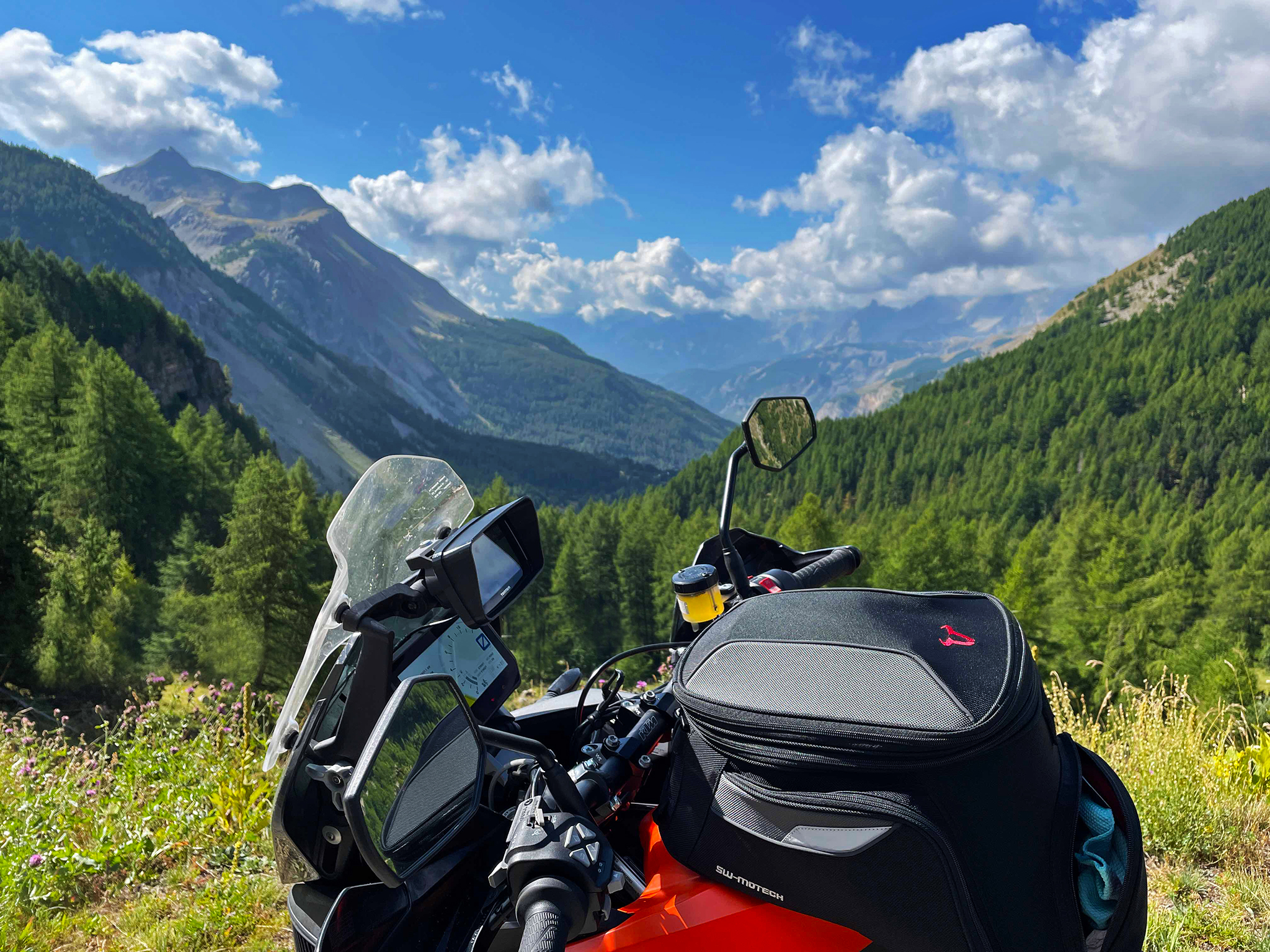 I continued south to the not too remarkable Guillaumes. Right south of it turned east on D28. At Les Crouis the D30 takes over.  Not long after I reached Col de la Couillole. You don’t get the same altitude feeling here, while down below the tree line. At only 1678 meters some might not think it’s much. But it certainly has its own character. 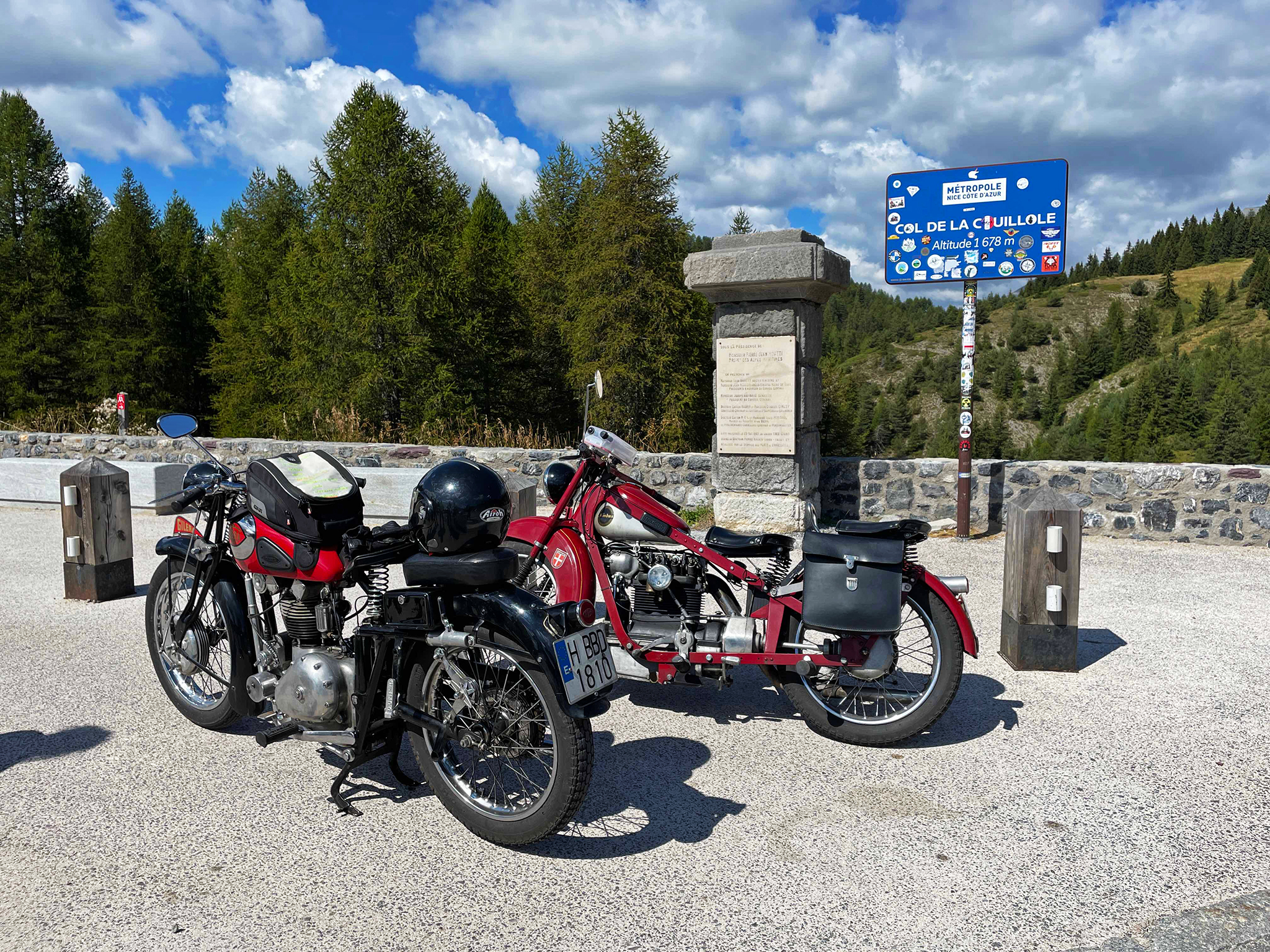 Rolling into the parking lot I saw something interesting. A group of veteran riders who were out with their old motorcycles. They had been part of a veteran “race”.  and were heading south. One of them had come all the way from Spain on an old Gilera. Impressive!

It’s always cool to meet fellow riders when on an adventure. It’s equally cool to meet people who ride on veteran motorcycles. I don’t remember exactly how old they were, but one was at least from the 30s. Think it might have been the Nimbus. A one of-akind Navigation aid or “device”.

One of the riders, a woman, had a “navigation device” unlike anything I’ve seen. Simply a scroll of place names, winded up inside a watertight box, with plastic bolts. Designed by her creative husband. A brilliant and simple solution to route planning. One I’ve never seen before.

Further east, down from the pass, I took left and north on M2205.  This was around 60 kilometers from Nice.  But neither Nice, the coast, or the Mediterranean was on my list of places to go to. Instead I continued north to Isola.

Arriving in Isola I looked at the GPS. Hmm, Col de la Lombarde, at the Italian border, yeah why not? Hopped onto road M97. Nice one! Soon I was up at the pass, looking into Italy. 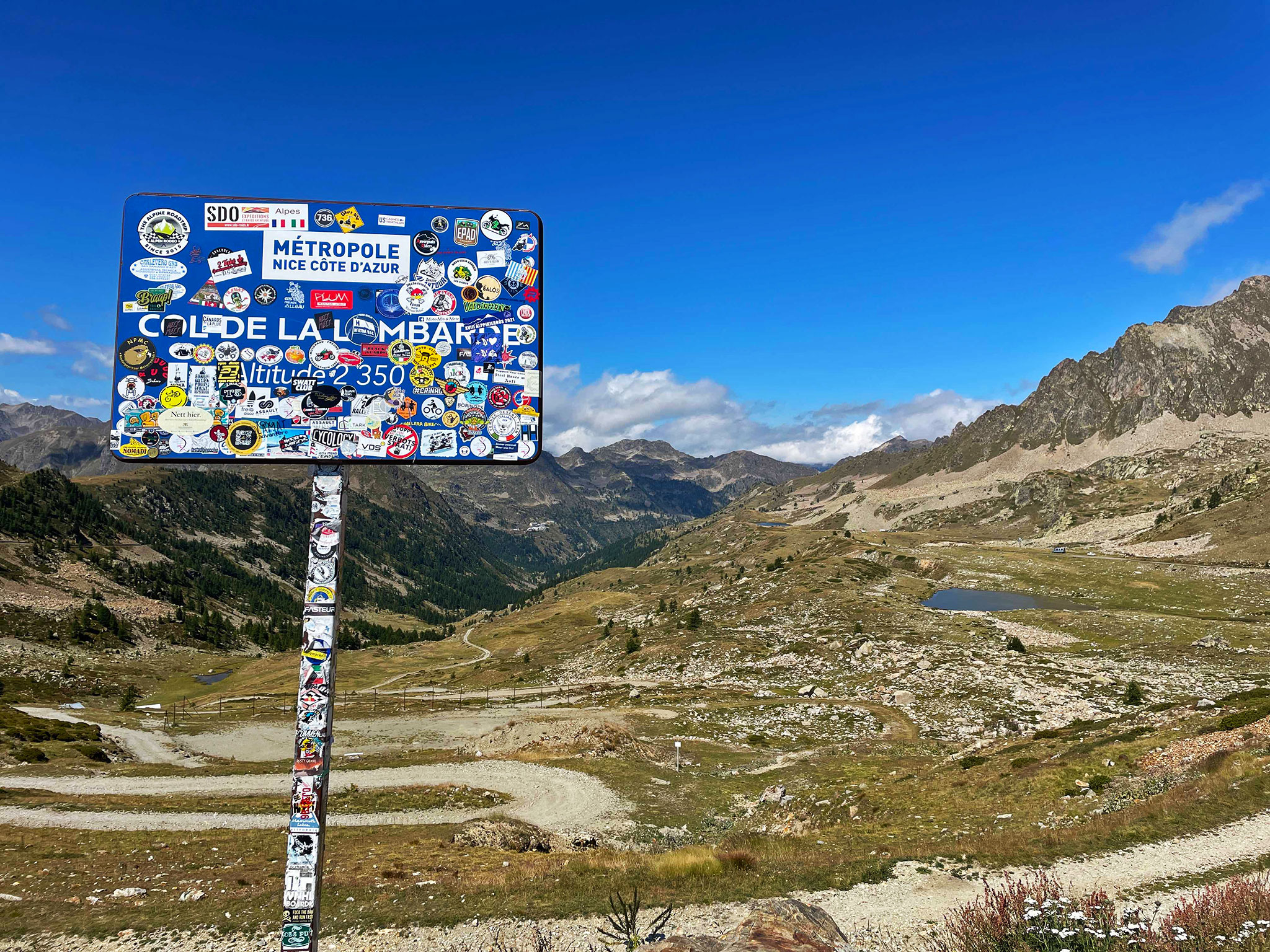 At Col de la Lombarde – 2350 meters altitude. Looking into, but not going into, Italy.

Now it was decision time again. Should I continue into Italy? Thought about it for a short while, then decided not to.There was one more pass on the list of the day. The most famous of them all. Col de la Bonnette. 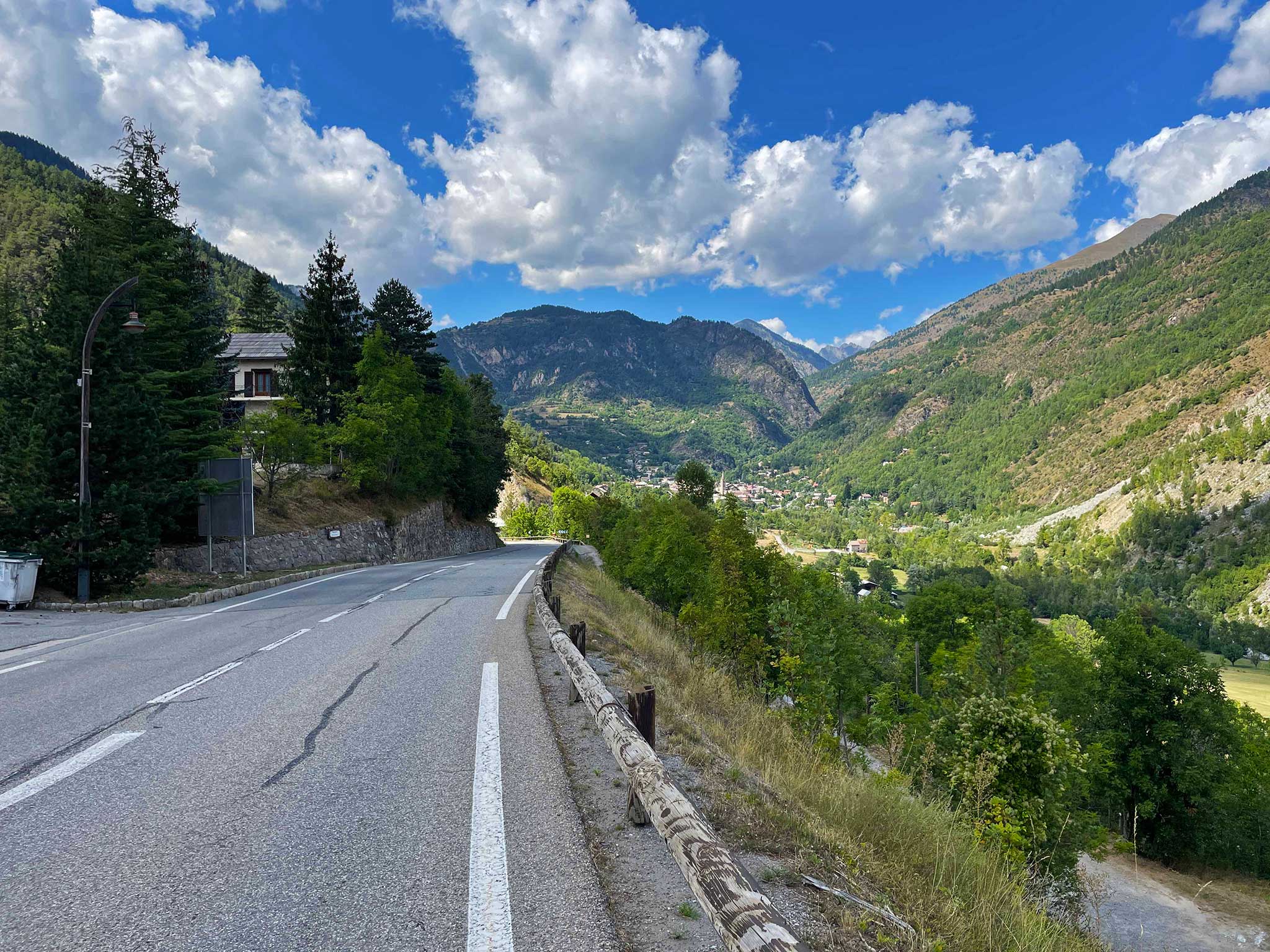 So I turned around and rode back down towards Isola. Underway stopped for a lunch, then took M2205 north. It’s about a one hours drive or ride from Isola to Col de la Bonnette. A bit more if you count in multiple stops, to take pictures.

Passing Saint-Etienne-de-Tineè the climb began. It’s a marvel of a road, with stunning views to the left and right. It was impossible to ride all the way up without making multiple stops. This time I’ll let a short videoclip do the talking.

As usual, things look a lot more flat that it is. The road to “La Bonnette” is really great for motorcycle riding. Regardless of what side of the pass you are. No, it’s better. I can put it on my top ten list of paved roads in the Alps, easily. 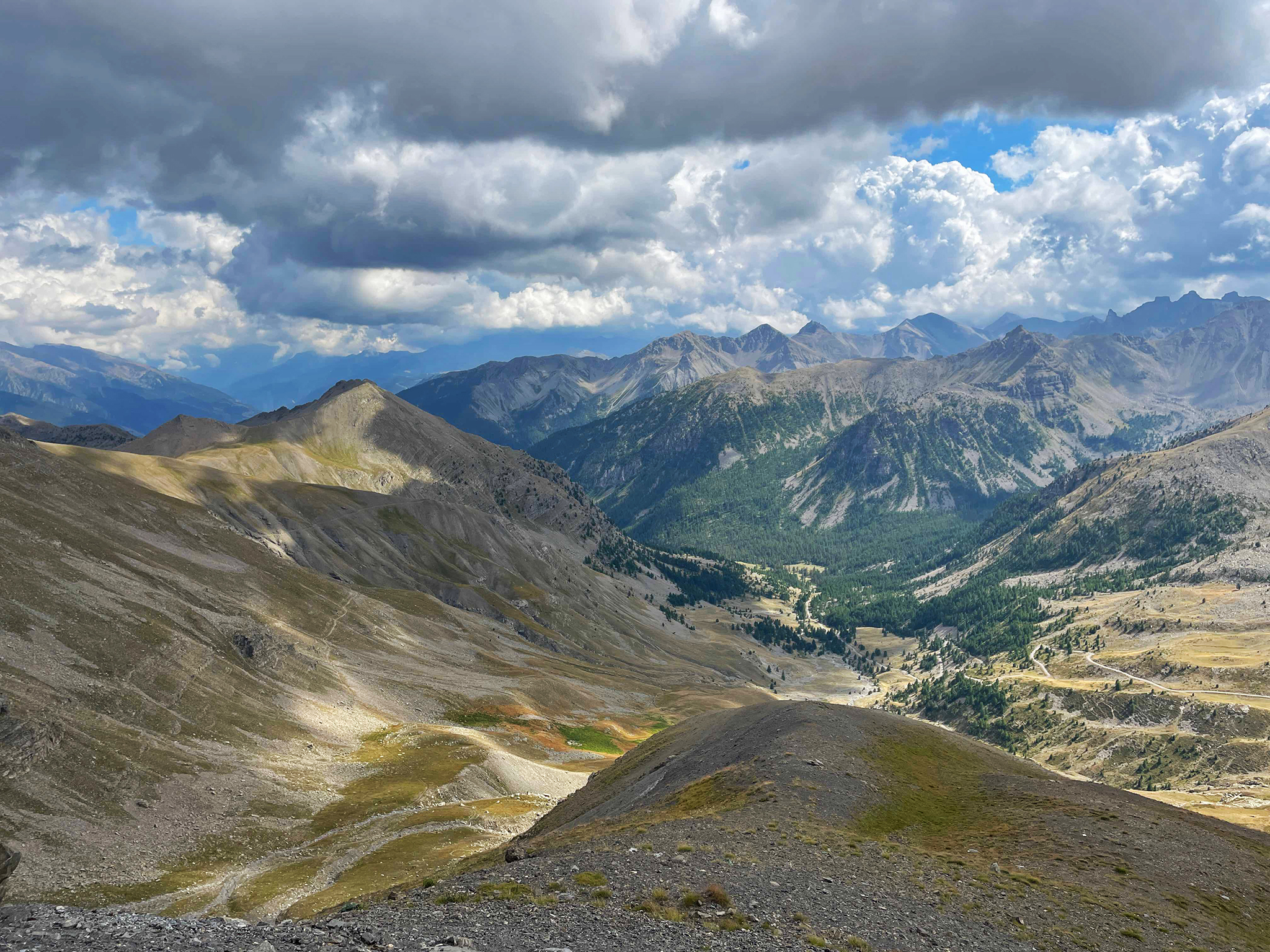 I’ll make sure to ride it in the other direction some other time. Good to have things undone. After all, a road isn’t ridden properly if you’ve not done it in both directions! And this road is actually the highest paved through route in the Alps. Well worth considering if you’ve not been  here. Take my word for it! 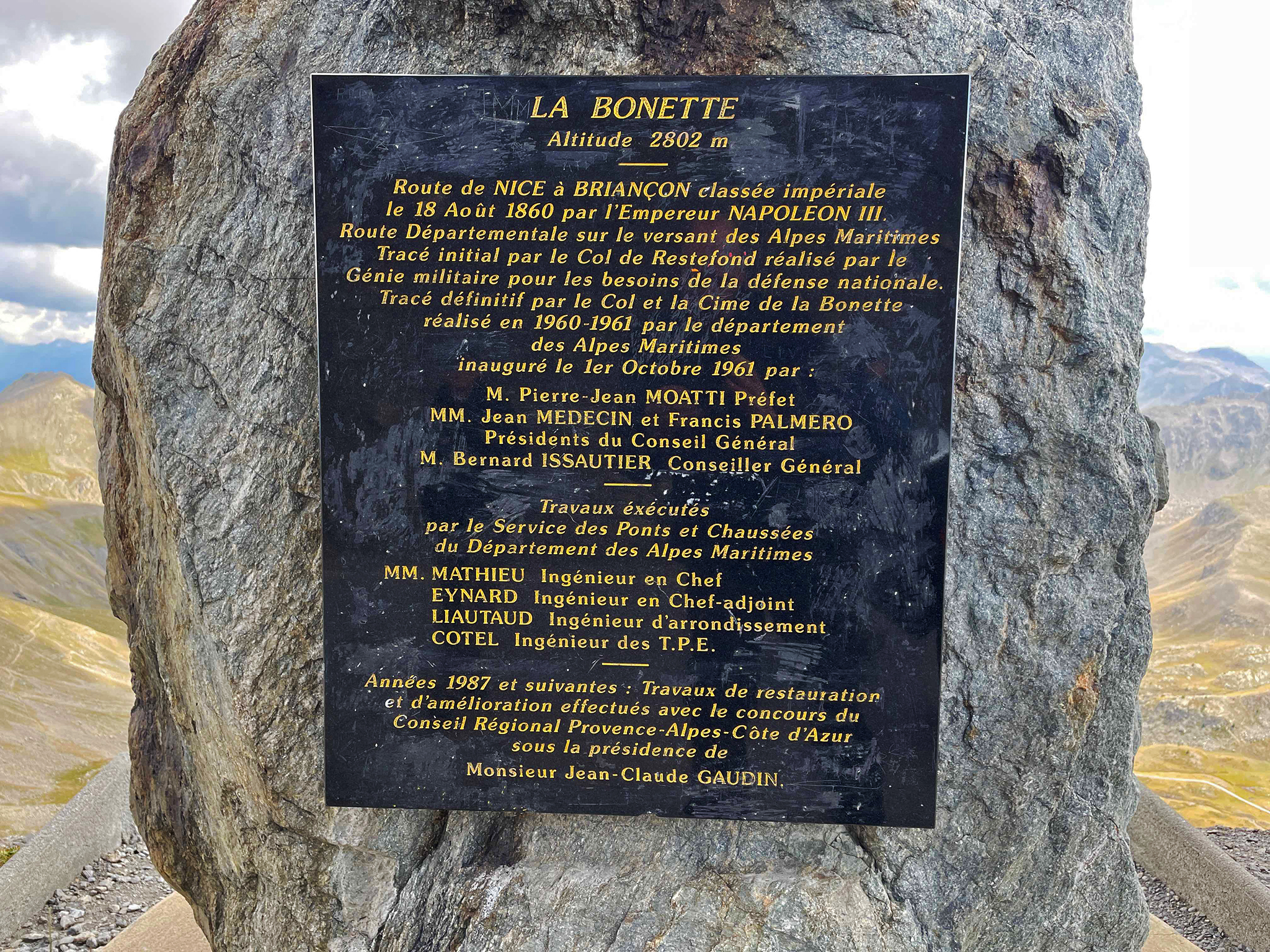 At the top I found more riders than I’d seen all day. Not surprising given its La Bonnette’s place among the Alpine passes. I stayed for a while to take in the views. 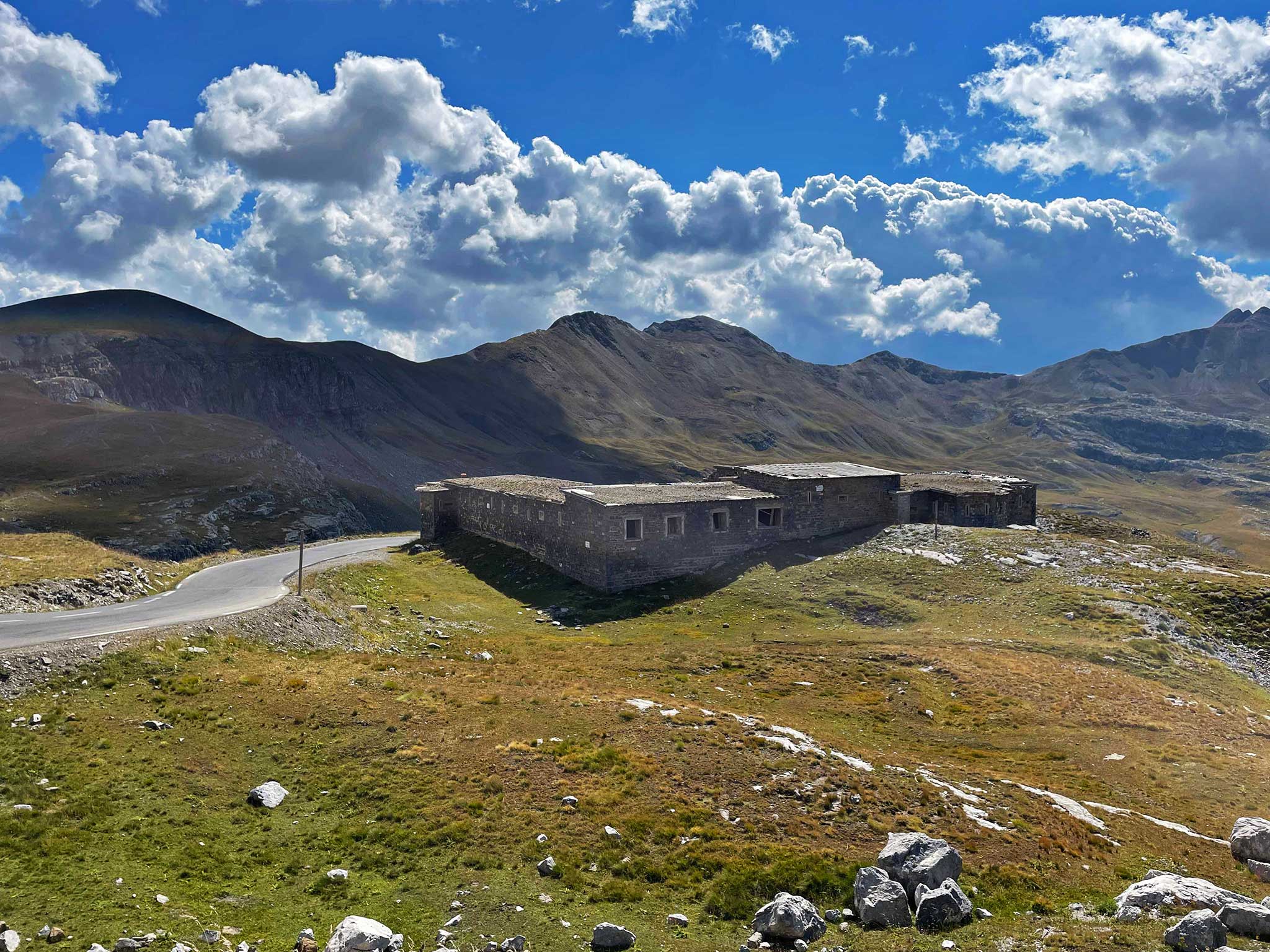 Ca 3 kilometers down the road, at an elevation of 2.558 meters, sits Fortin de Restefond, an old military building. Built in 1901 as a part of the Maginot defense line.

Coming down from the mountain pass to Jausiers I took the D900 north. At Chapelle Saint Jacques it changes name back to D902. I was longing for a rest and a cup of coffee. But didn’t stop in any town or village.

I kept on going for about an hours time after La Bonnette. But at pass number five it was time for a halt. Col de Vars sits between the departments of Hautes-Alpes and Alpes-de-Haute-Provence in France. Elevation is 2108 meters. And there’s a cafè as well. The temperature was pleasant, a coffee precisely what the doctor ordered. 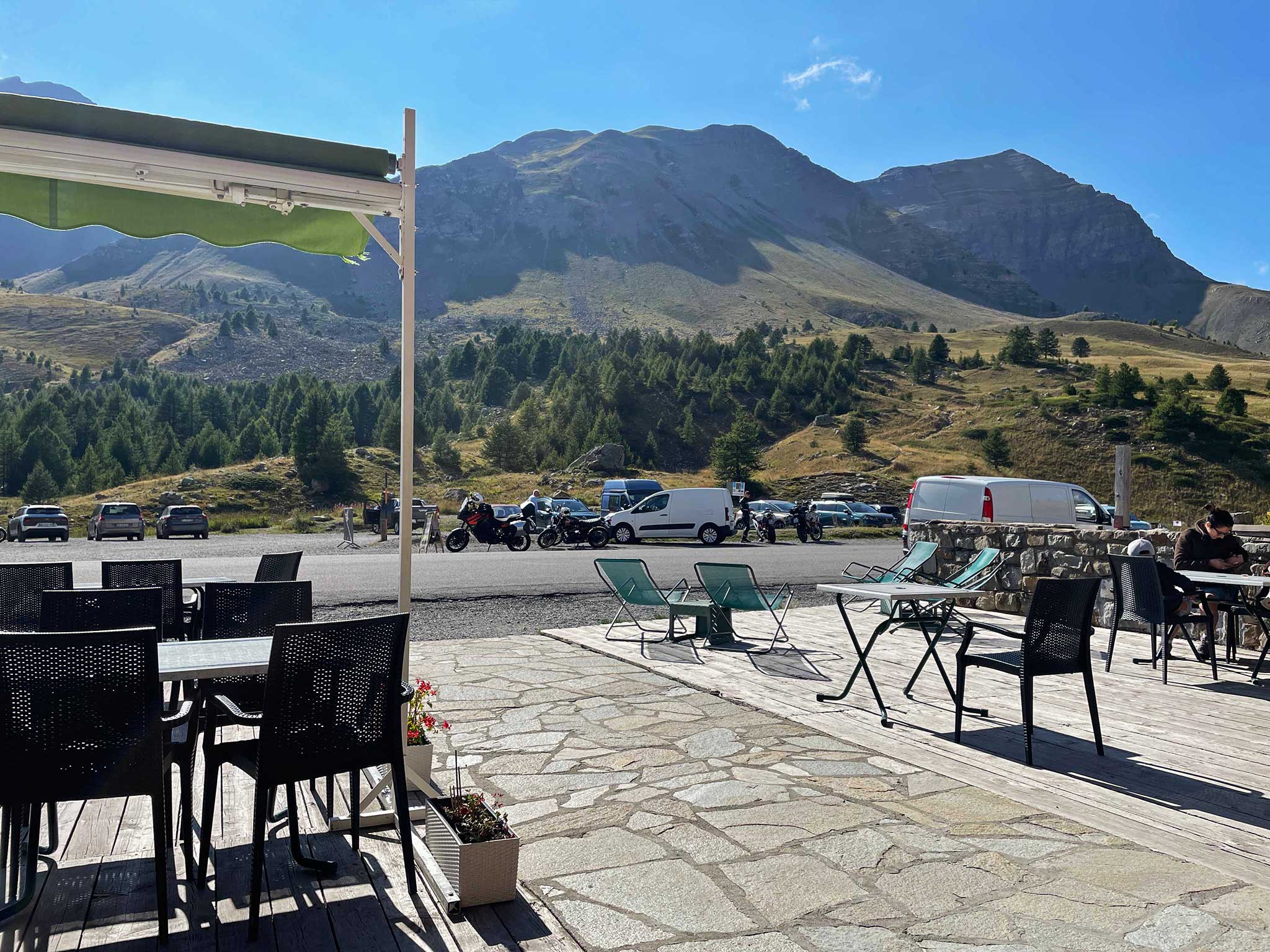 Time for a halt, for both rider and steed. At At Col de Vars.

Time flies as always. Day had become later afternoon. Started to think about where to stay for the night. France, or continue into Italy? Well that and more you’ll find out in the next post. Suffice to say, little did I know of the drama that awaited me!

Below: route of the day 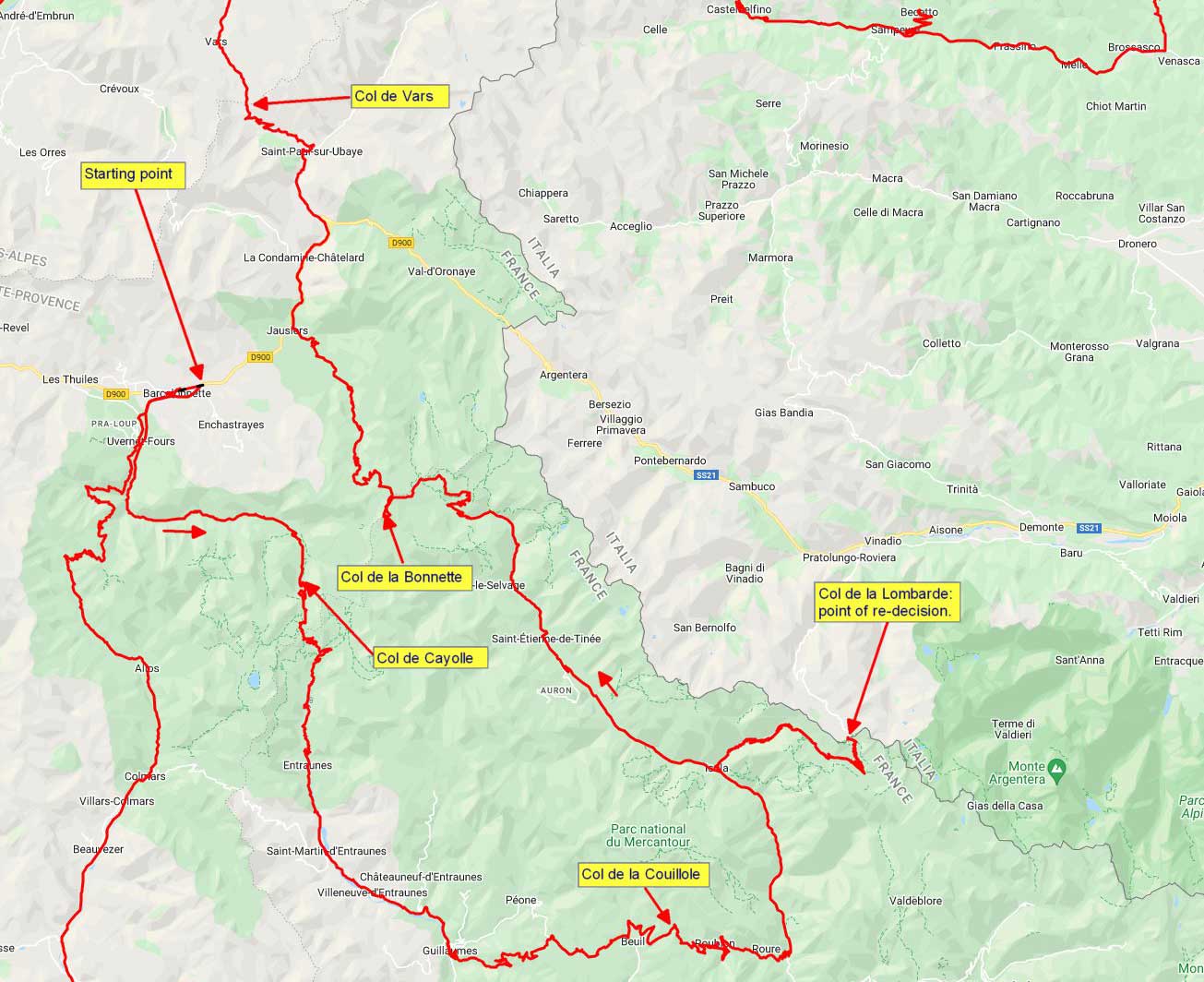