Fall in Norway can be pretty spectacular when you ride about. On days with sun and decent temperature the brilliant colors transforms the landscape.

Fall, especially in later September, means lower average temperatures. This is a good thing for motorcycle riders with lots of safety gear on. As you move into October inner lining comes to your aid. As does heated grips. Well in fact, the heated grips can be useful much earlier than that. Especially in the morning.

I mostly ride in the weekends, when the weather is good. So also does thousands of other motorcycle riders. You meet them almost everywhere.  Some ride in huge groups, some in smaller ones. Then you have riders like myself, who normally either are accompanied by one friend, or ride alone. 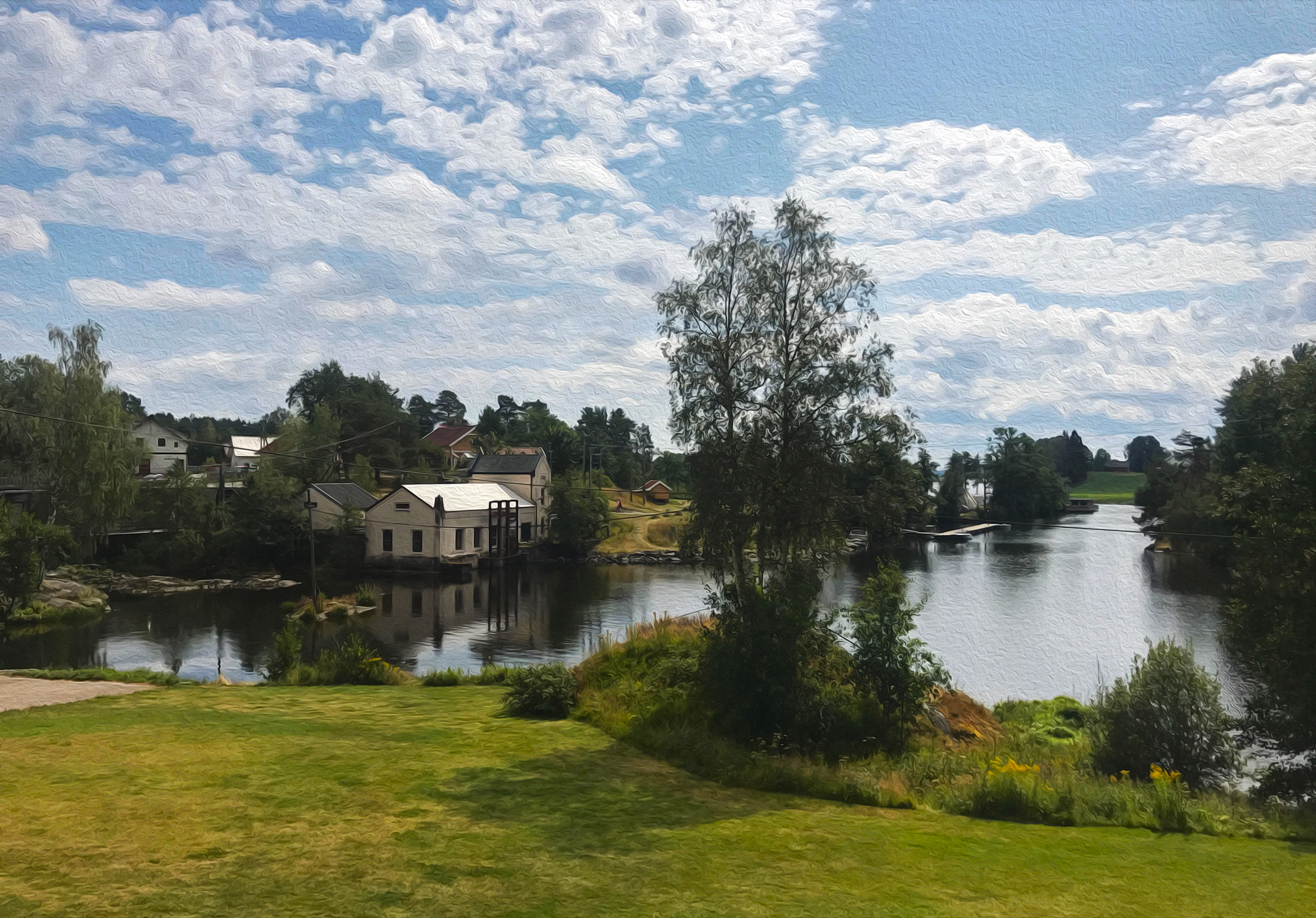 Early August the crisp yellow and orange colors are less present. Climate and weather naturally controls the process. If a warm August trees and plants cling on to their more youthful lush green. With a tint of muted yellow here and there. The degree depends on where you are in the country.

Some places up north August is indeed a real Autumn month. In Aremark at The Miller’s house in Strømsfoss there weren’t many signs. 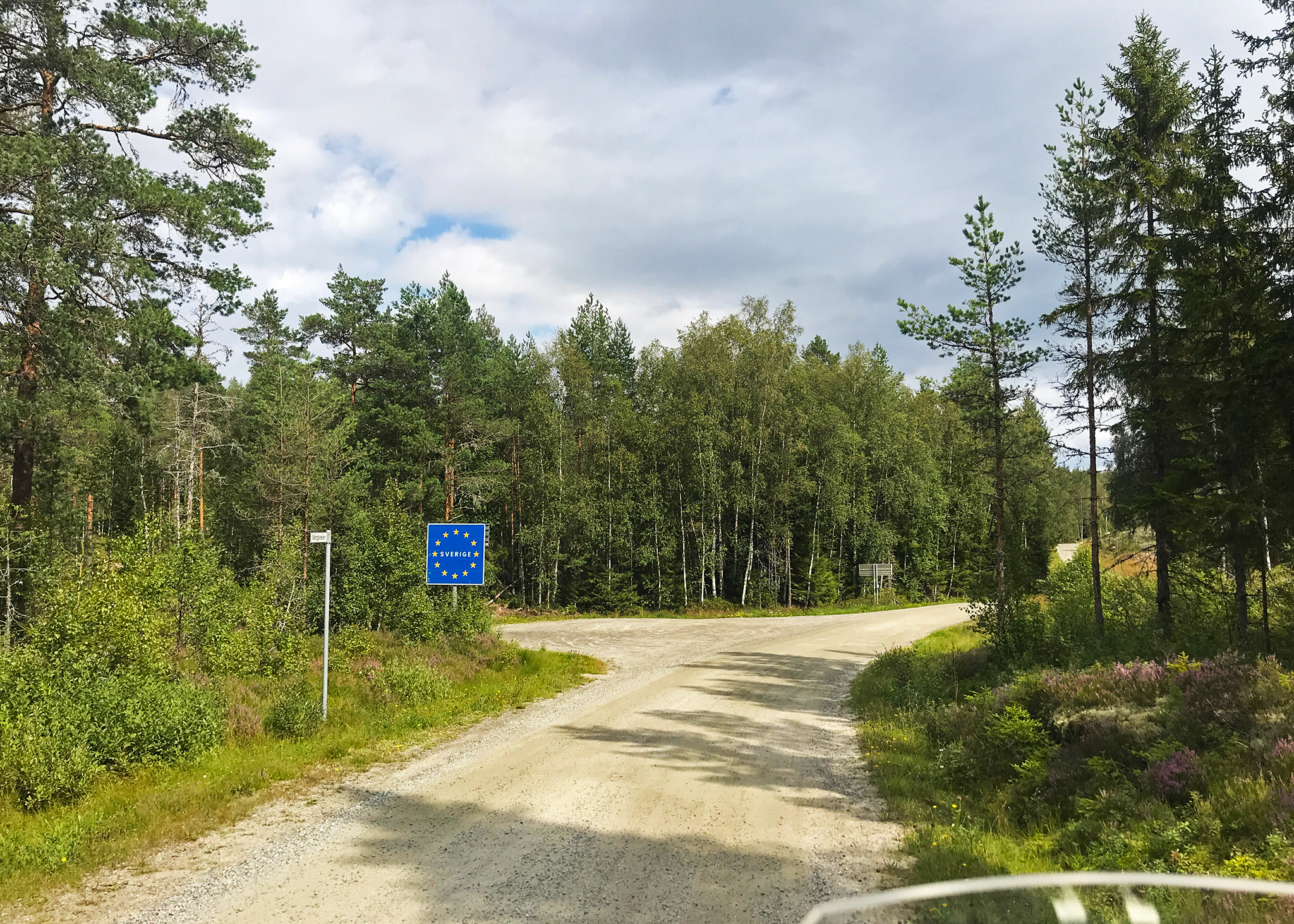 Into Sweden on gravel early August

On this particular day in the first week of August me and a friend rode into Sweden to check out a property. The temp was like on a decent summer’s day.  In this part of Norway and as much Sweden, there are a lot of back roads connecting the countries.  Where you find signs like the one above but nothing else.

The situation with summer feeling continued well into the later half of August. It was just as if fall was put on a hold. Well not everywhere. The following weekend I went for a gravel solo ride north of Oslo. 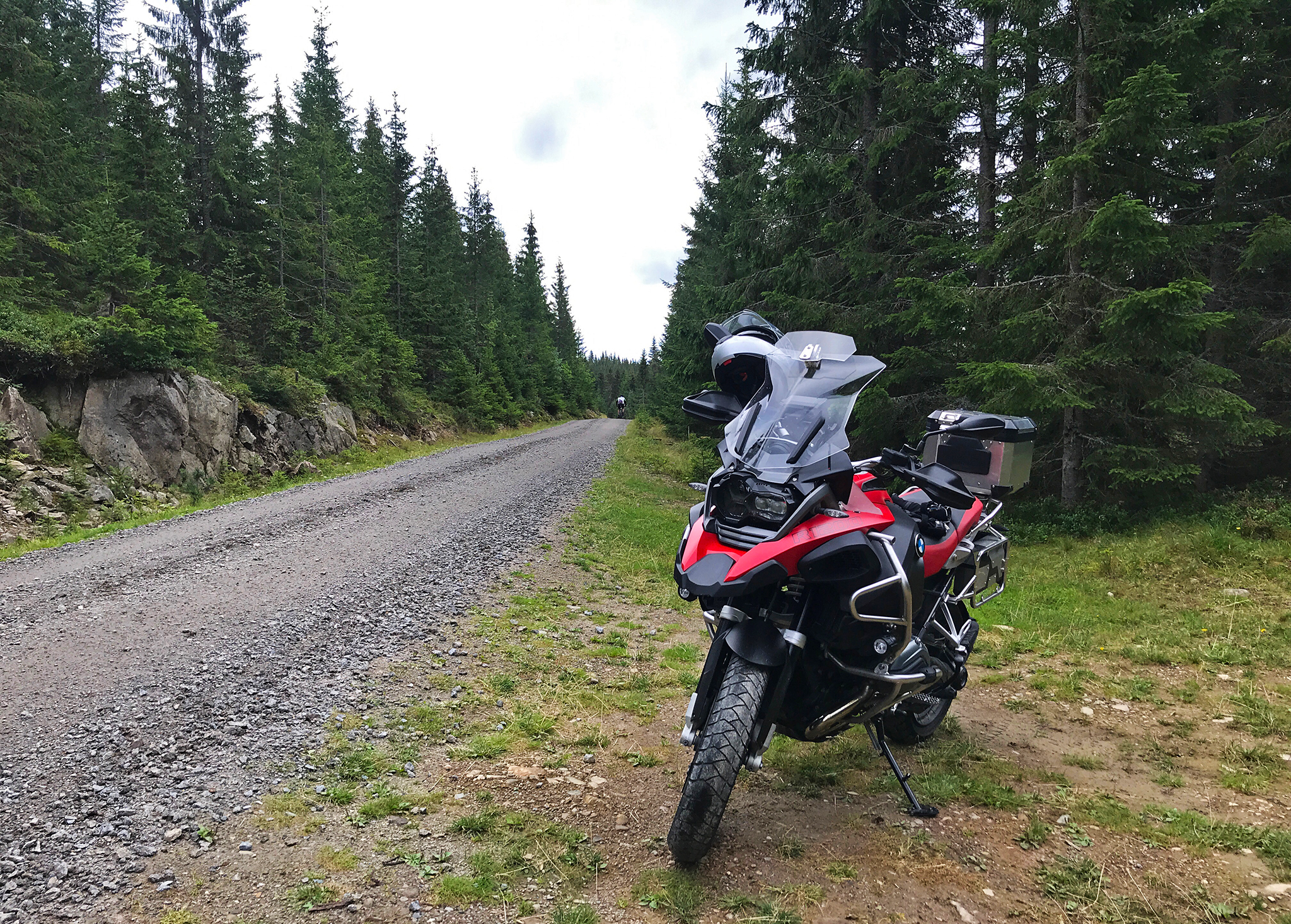 On gravel in the woods north of Oslo

Deep into the wood the temperature did feel a lot more like Autumn. Chilly but not directly cold.

The following week brought us into the end of August. Together with a friend we took on a region and wooden area not ridden before. Supposedly with lots of gravel and dirt road. We were not let down. 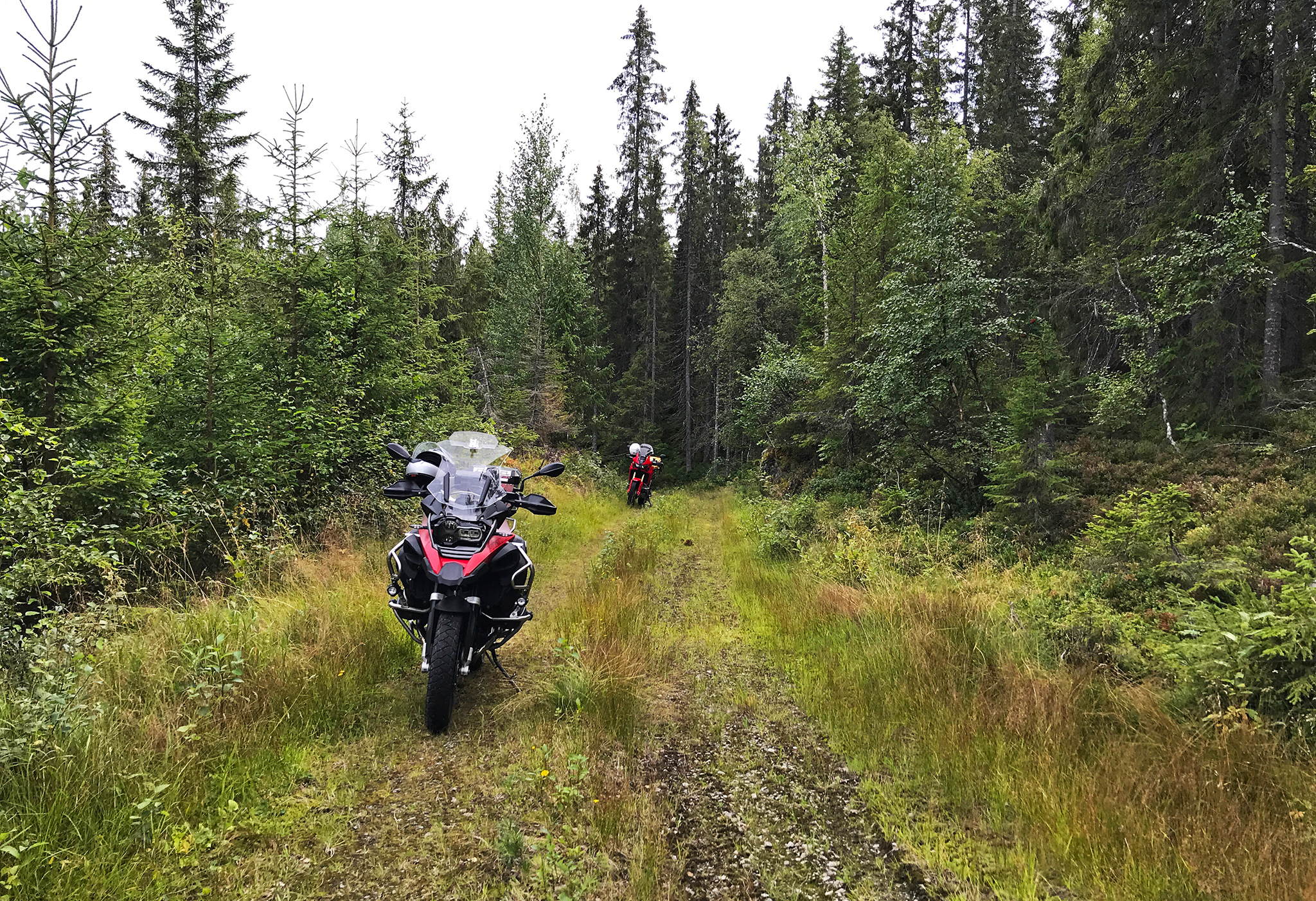 Offroad in the woods and hills in Oppland County, a couple of hours north of Oslo

We found a very old abandoned road. That turned into an overgrown dirt track. The map insisted it carried on for many miles. We explored it a bit, but rain the day before had made the ground treacherously slippery. Moss and tall grass plus wet is a recipe for potential problems. 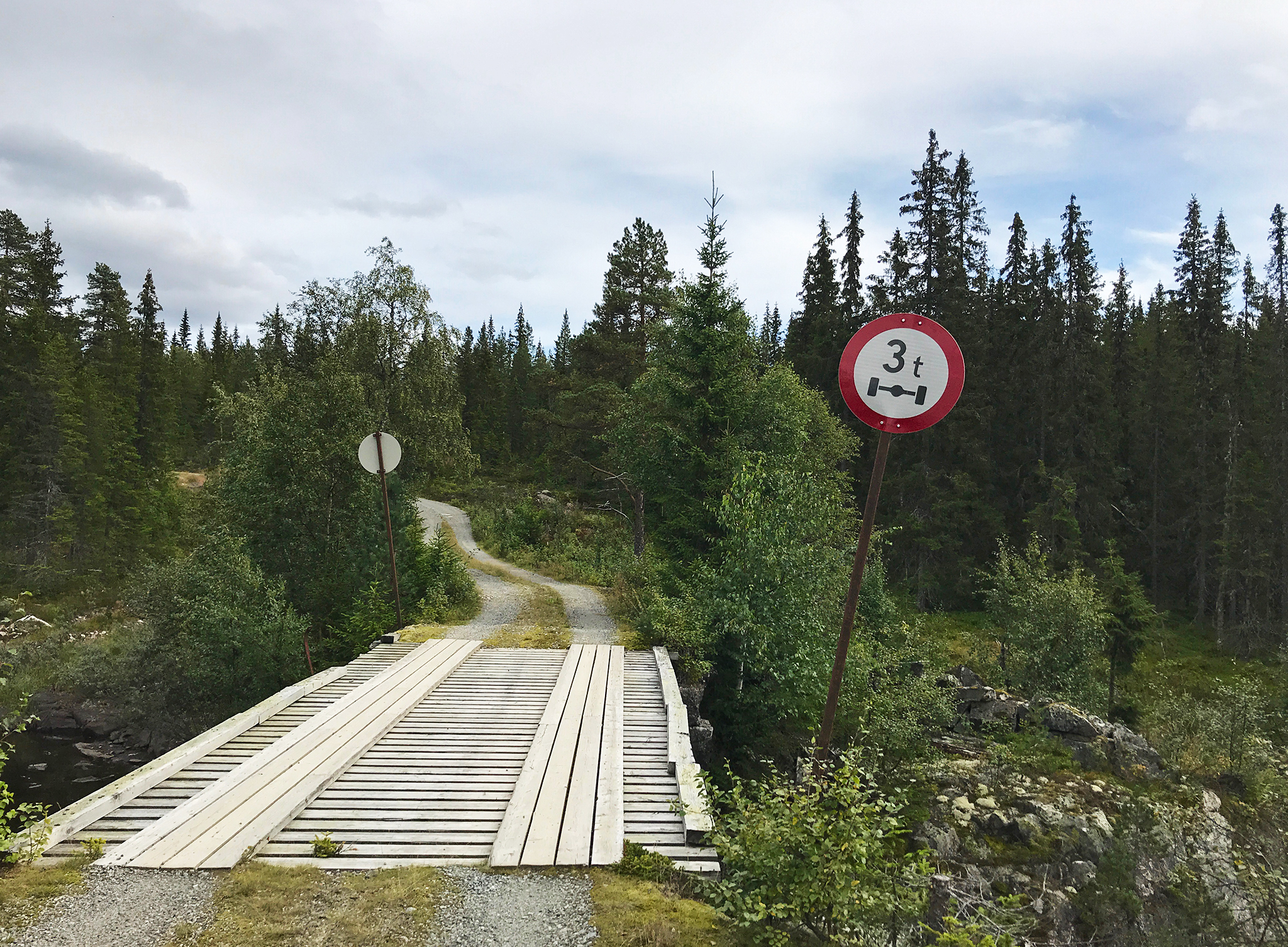 This bridge surely looks like 3 tons is the limit?

The remainder of the track was too overgrown so we went back on gravel. A great road with many smaller ones leading into various sections of the forest.  The rewards both with regards to roads and views was worth it. 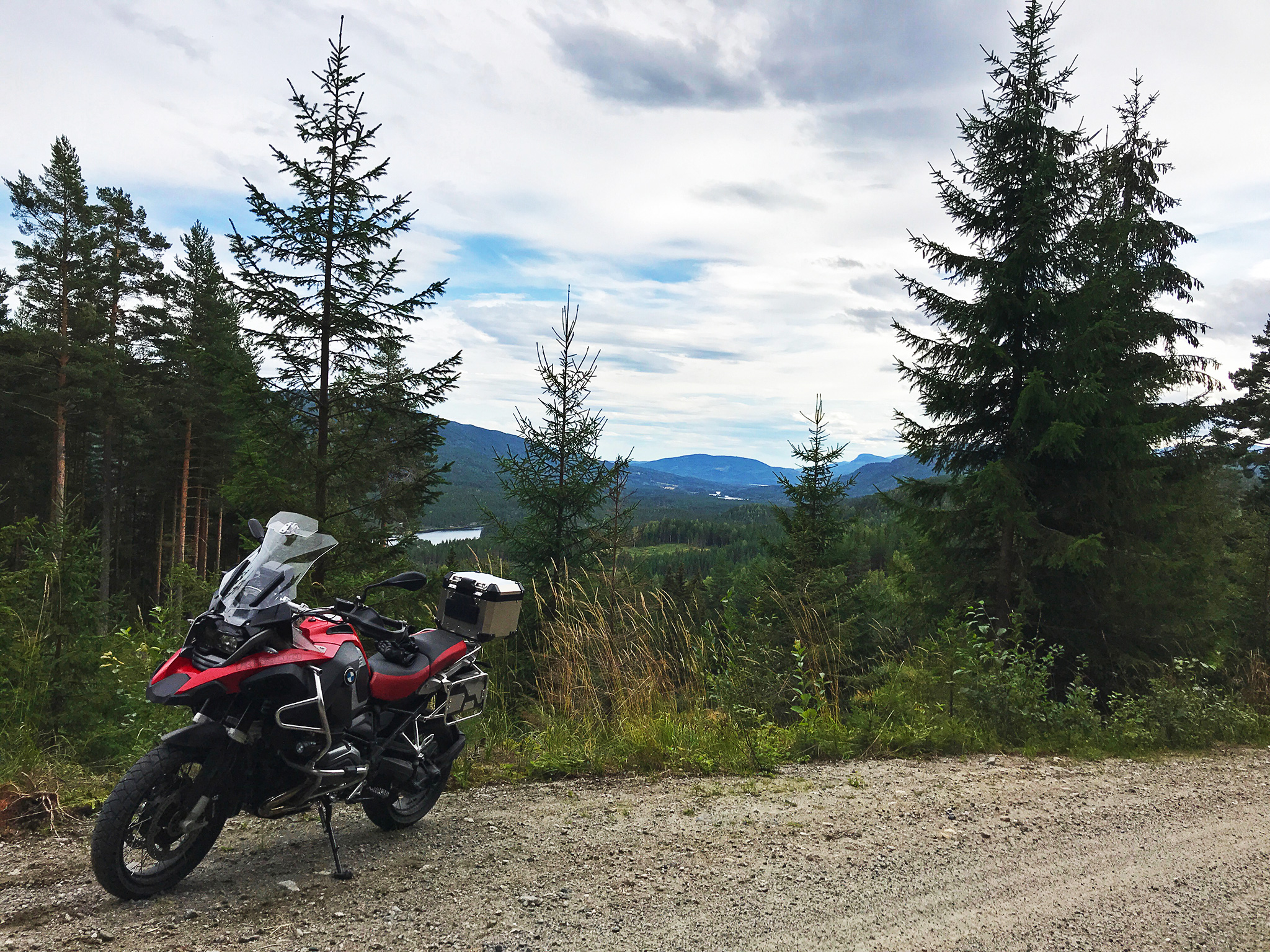 The woods in Oppland county goes on and on

September came and the weather changed to the cold and wet. Being busy there wasn’t much time for fun either. But late in September I found time for a whole day off into woods and mountains. 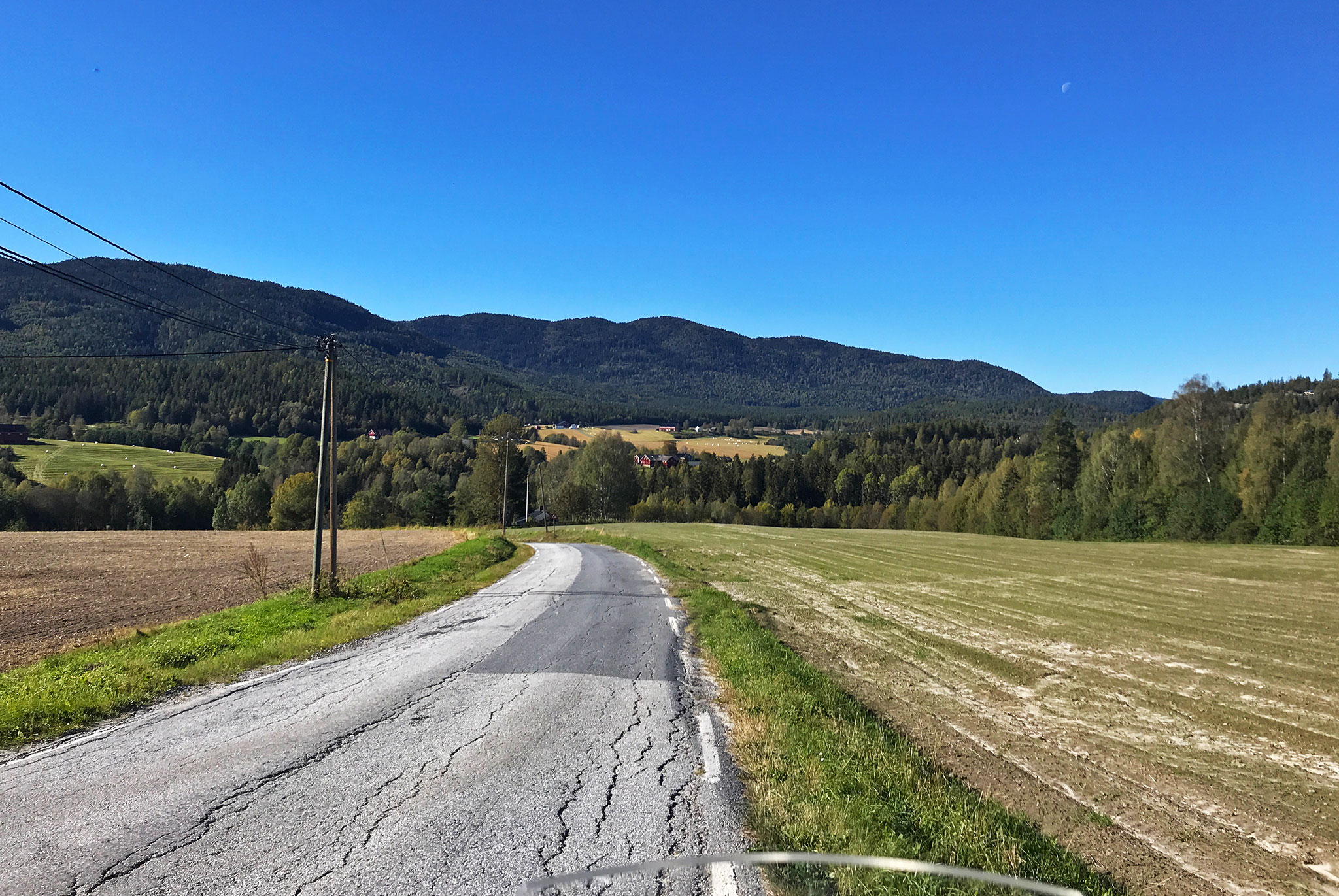 Back roads en route into the woods again

The weather gods was in good mood and the weather was stunning.  Out of the city area, onto back road and finally into the woods on gravel and dirt.  Autumn colors in vivid orange was everywhere. 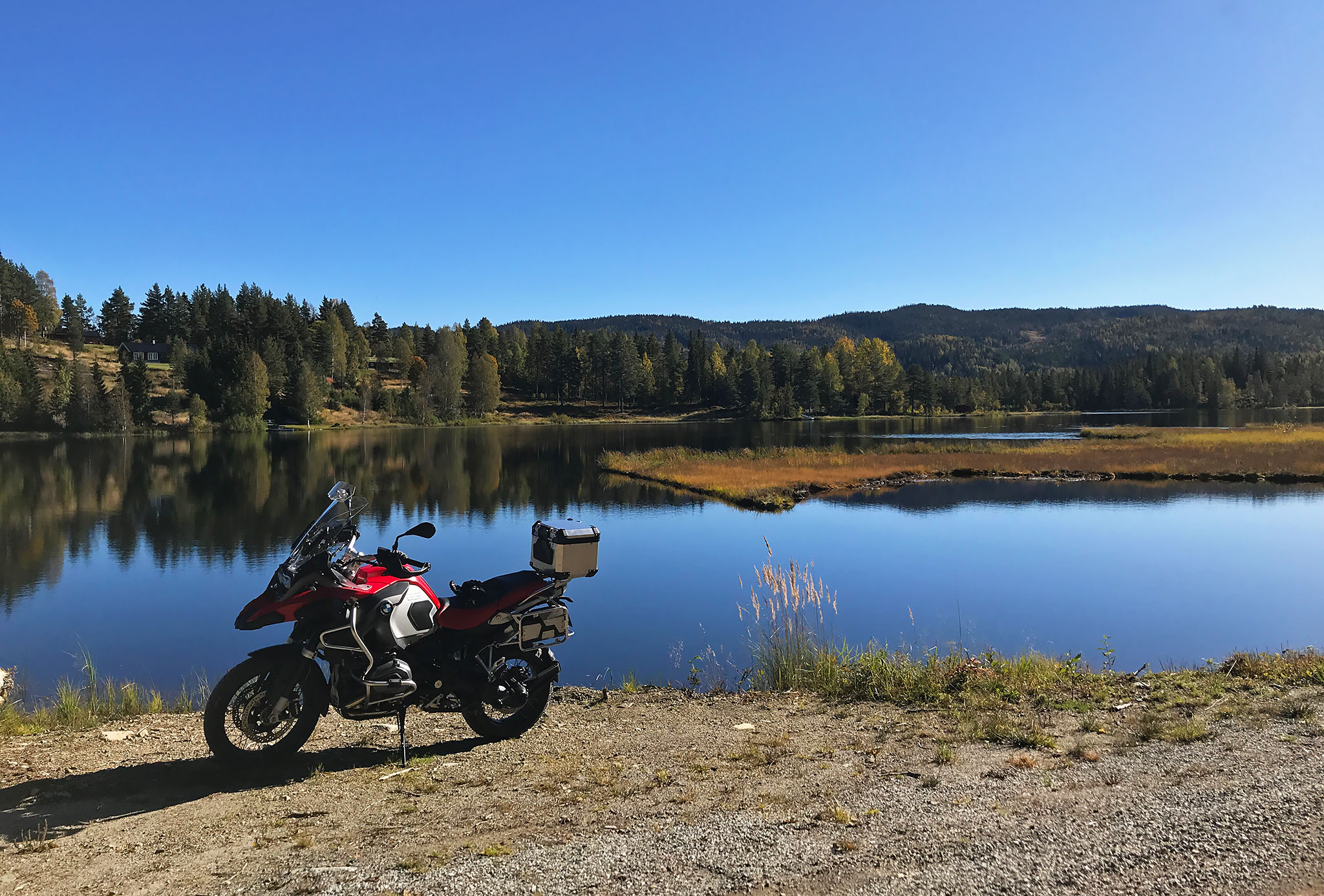 Fall in the woods

The route was a familiar one. I never get bored as it offers so much variation, both road- and landscape-wise. Seldom see other motorcycle riders on these roads. Many don’t know what they’re missing out on. 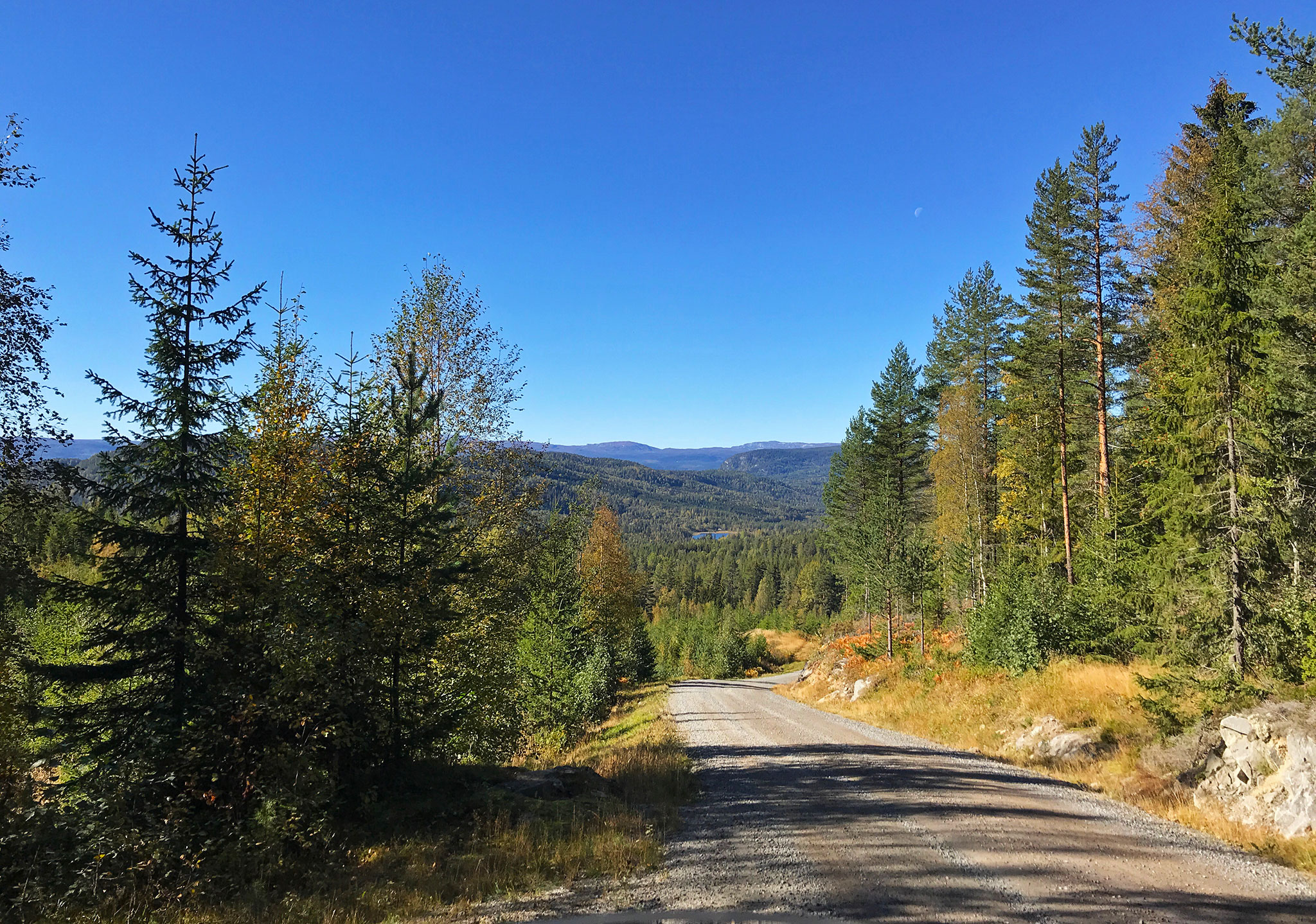 It’s interesting though. Adventure motorcycles are the most selling type in the country. Made for allround use, or gravel/offroad riding. Yet few take them one roads they clearly are built to handle. Oh well, it means more fun ride for those of us who like to get off the beaten track or pavement. 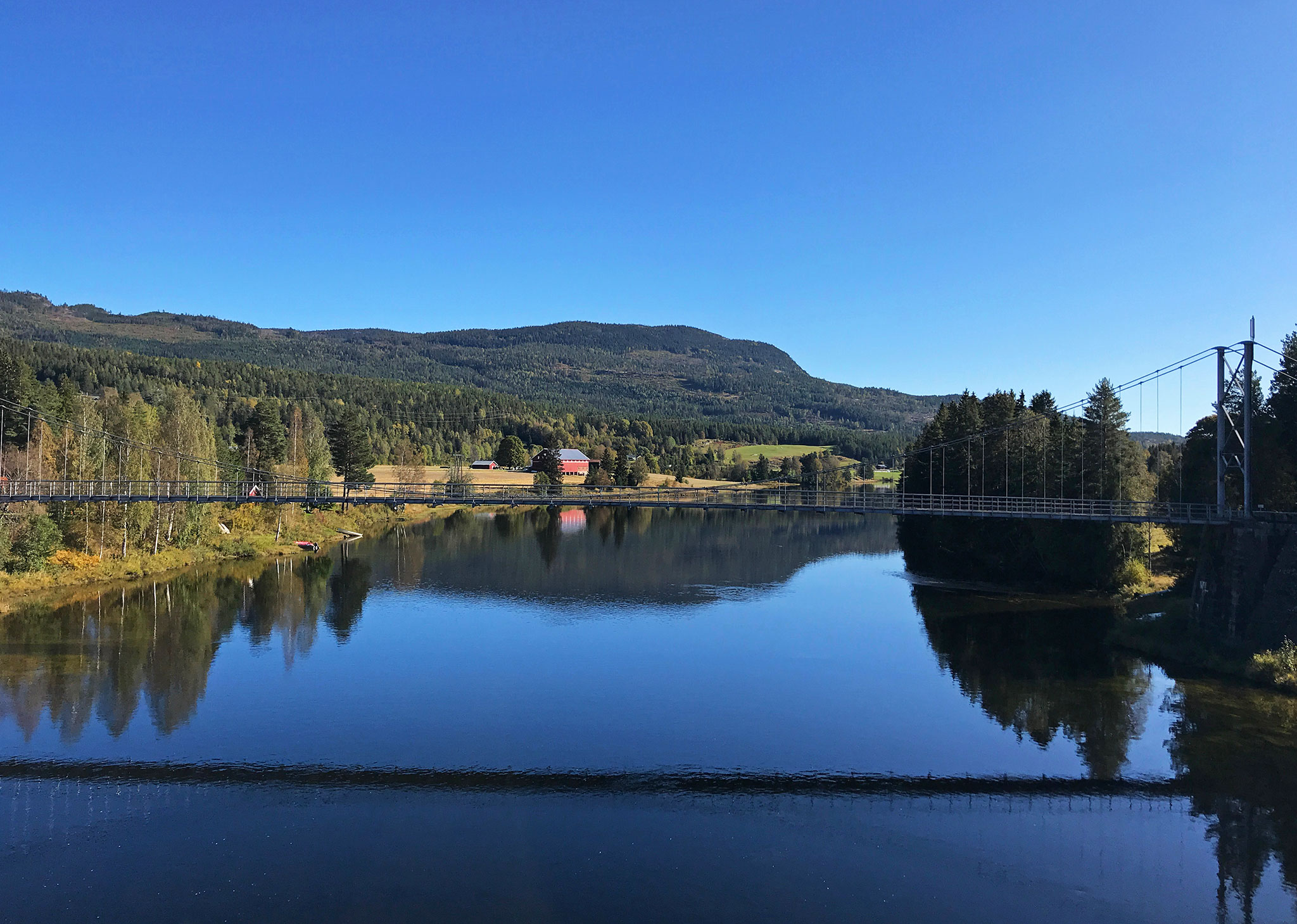 Rollag and the old suspension bridge across Numedalslågen (river)

Down and across the hills into Numedal I took the Rv40 up to Rollag. Since here and wanting to get off the main road again took off and rode across the river. Then followed the smaller road on the east side to Rollag Stave church. 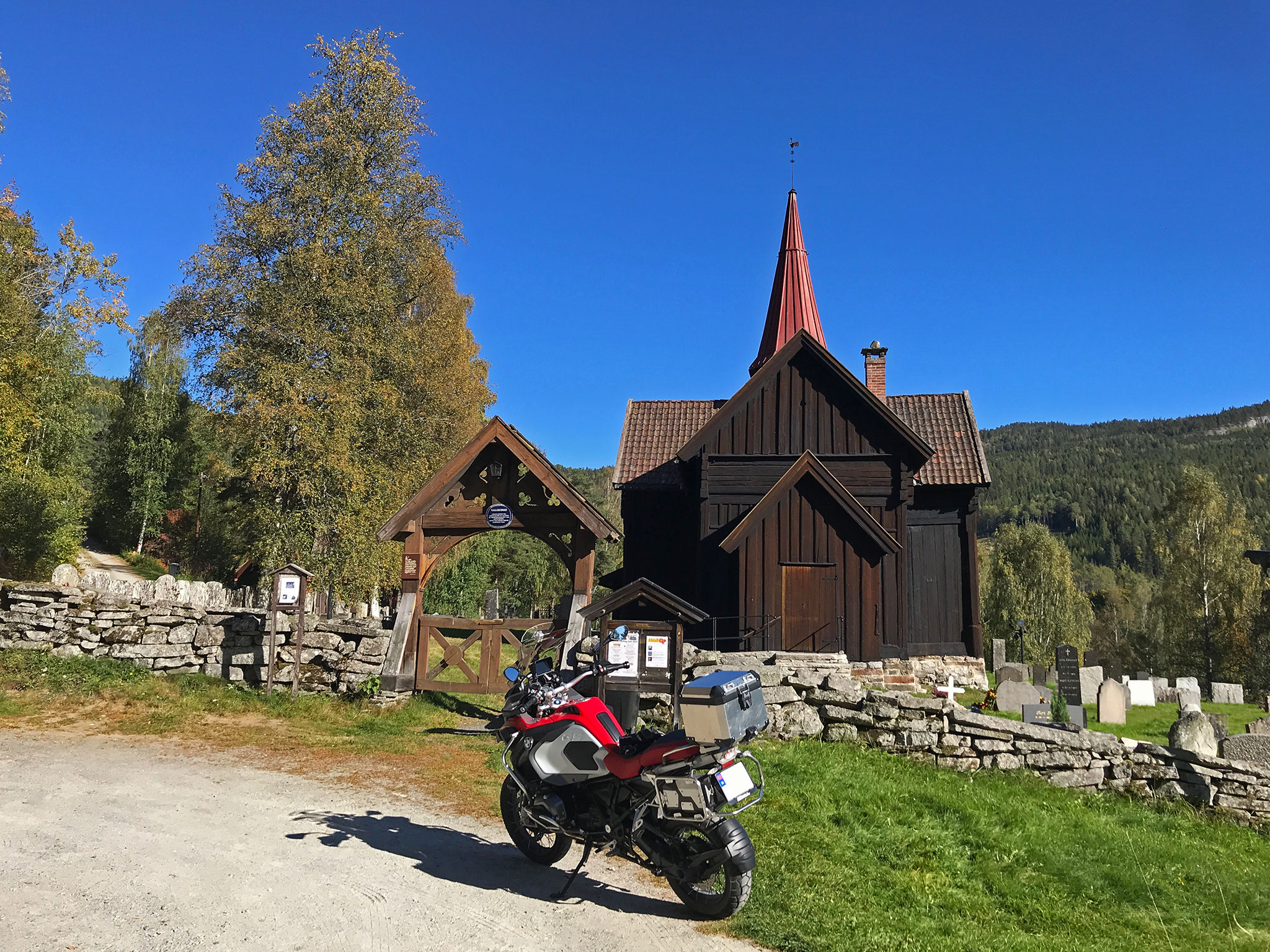 It is not the oldest in the country. it has a history that dates back to the later half of the 12th century. Appearing in written sources first time around 1425. It has since been rebuilt several times. 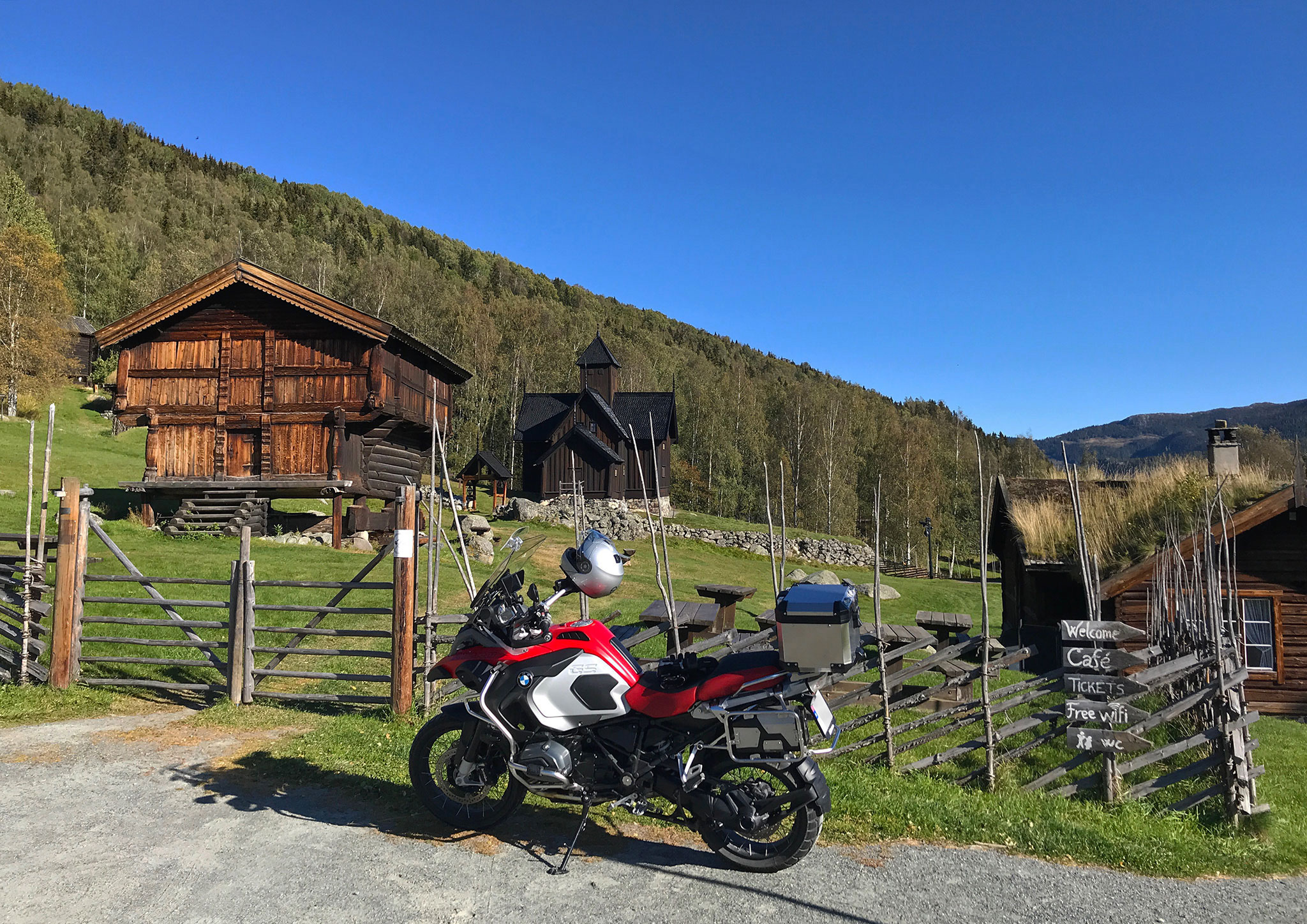 Further up I rode onto Uvdal where you also find Uvdal Stave Church. This church was originally constructed in 1168 AD and sits in beautiful surroundings. If you ever ride up this valley I recommend making time for a stop and visit to Bygdetunet in Uvdal. 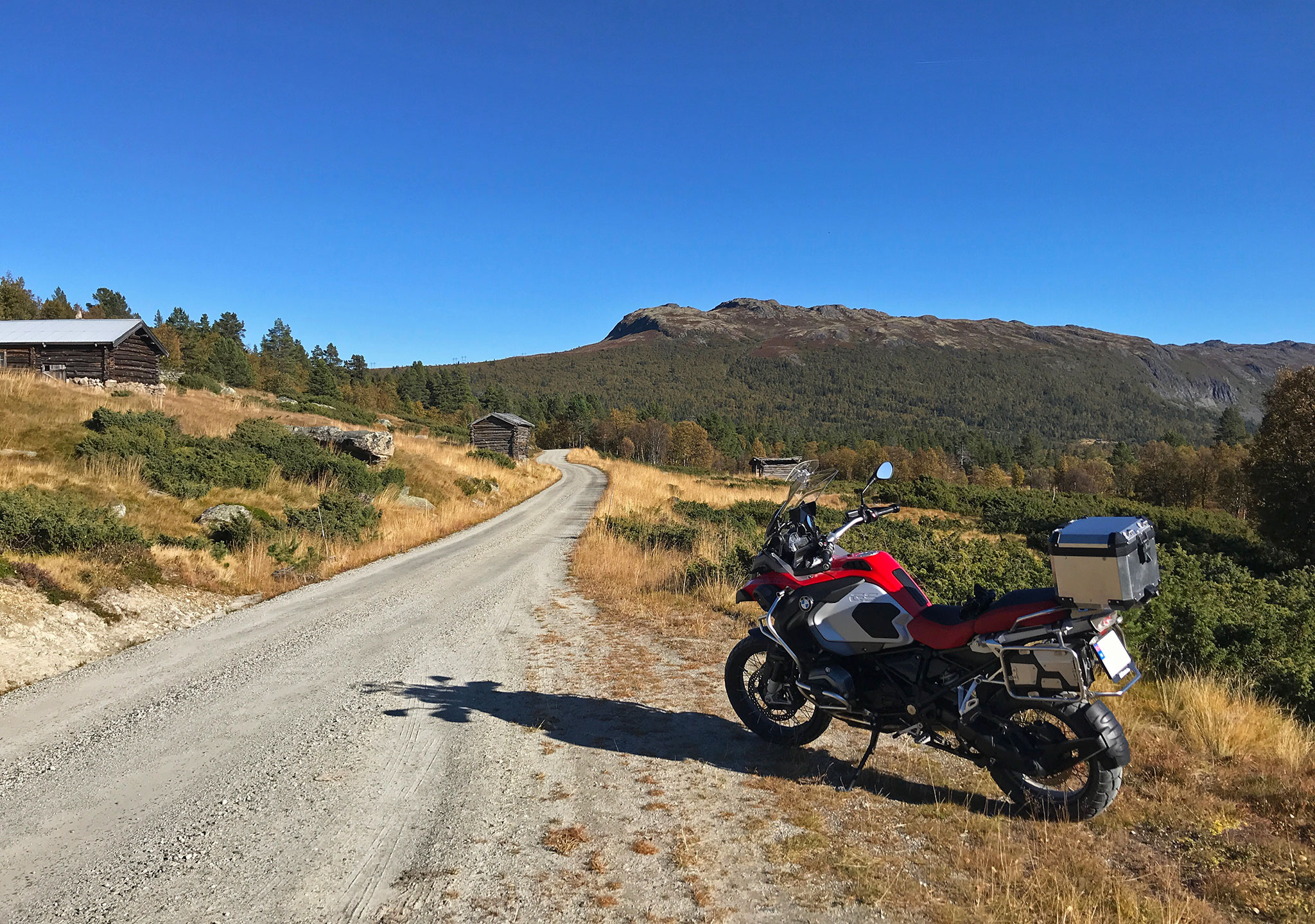 Fall riding in the mountains

Through Nore and Uvdal the climb begins up into the mountains. Right before Dagali I took off from the main road and onto gravel. Riding gravel up here is something quite different from further down. The road first went east, then bent south and back in the direction I came from. 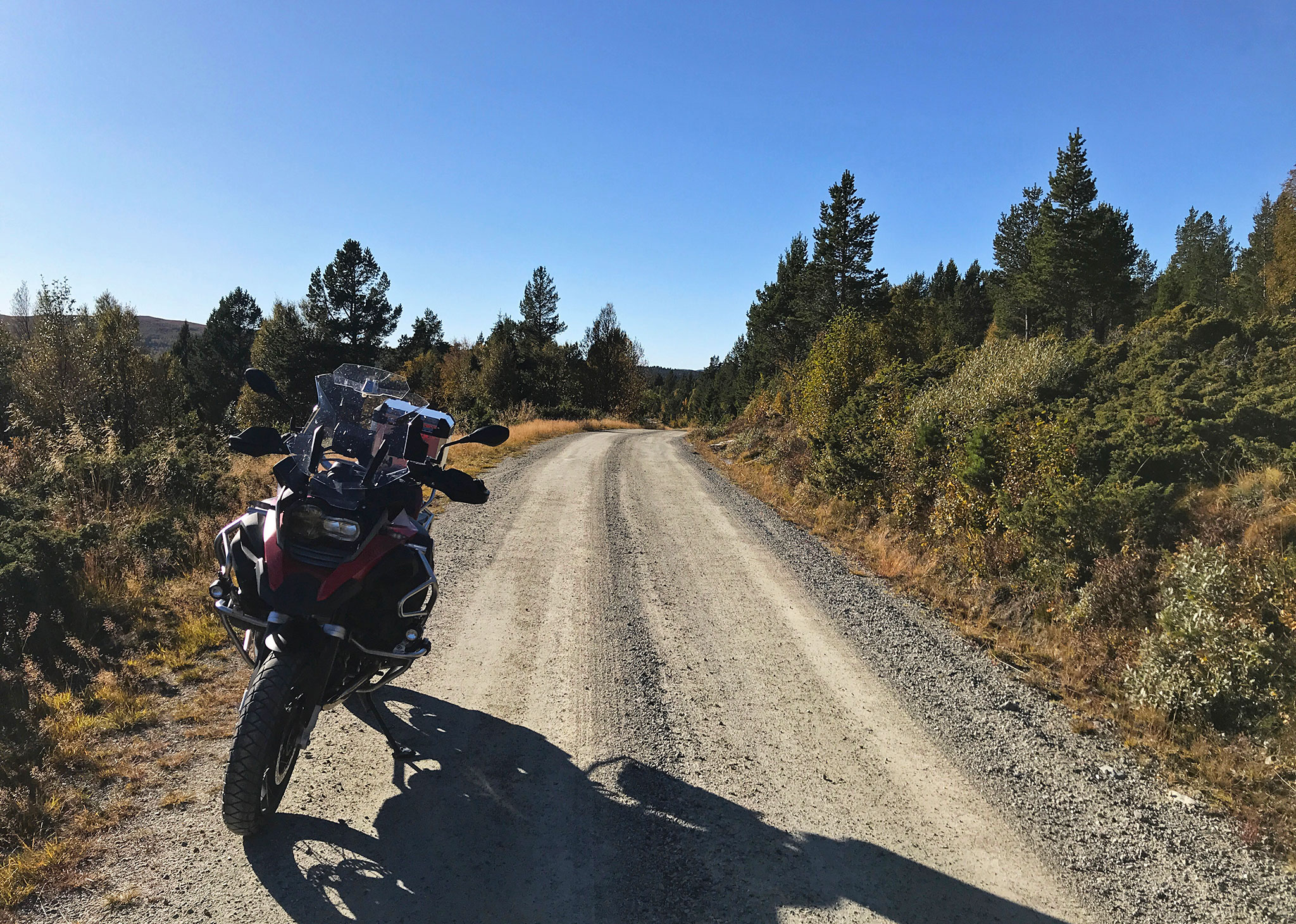 I can highly recommend this gravel road, whether you take it north from Rødberg, or carry on like I did and take it back south. 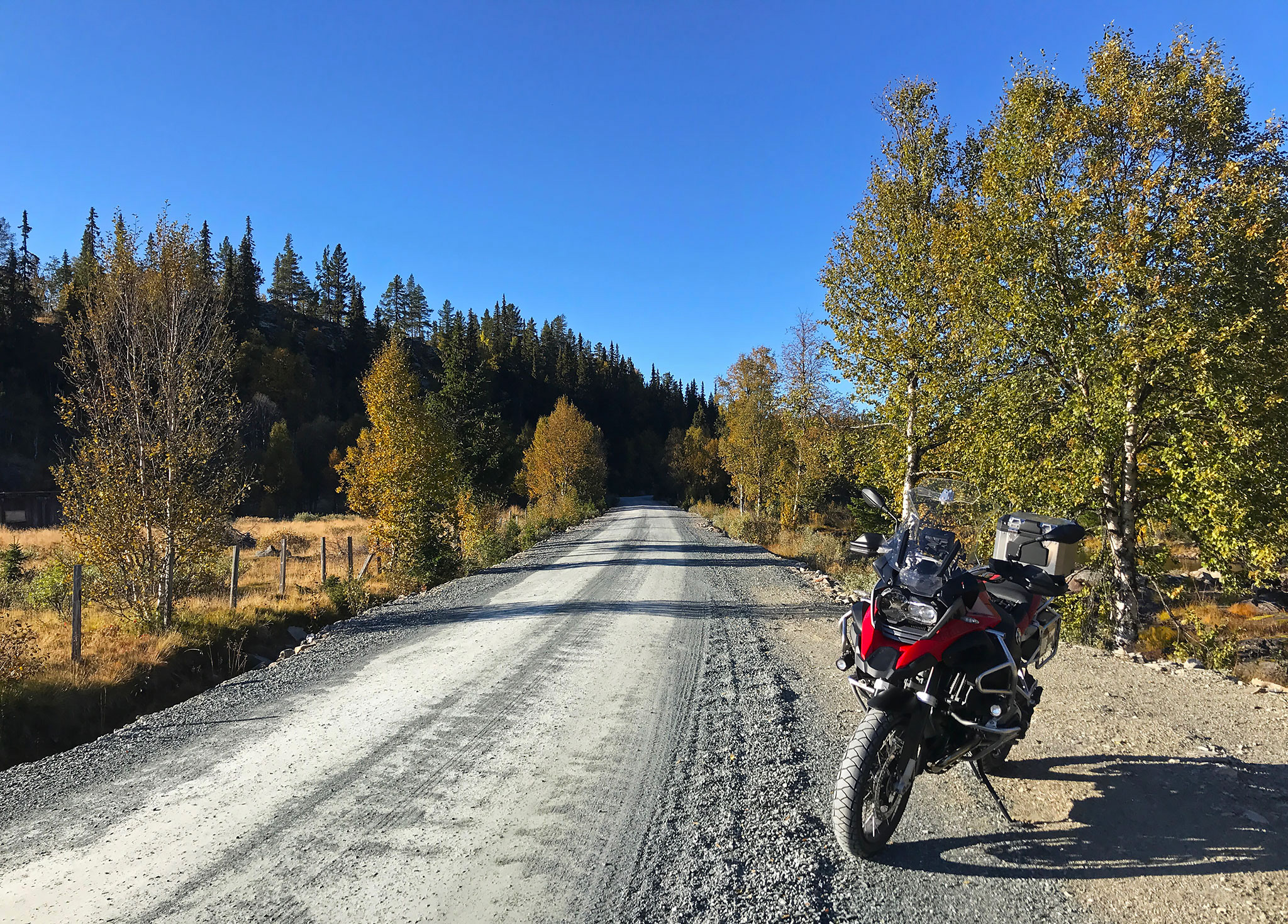 On the way back to Oslo I rode past Rødberg , shortly after this “town” to the left goes Fv119 which will take you across to Eggedal.  It was a perfect way to end the gravel part of the expedition. Arriving home I’d done around 478 kilometers. Not bad for a days worth of riding!

After that awesome day trip I mostly did shorter local ones. Late October the beemer was sent on winter storage.