Col de l’Iseran is the highest paved Alpine pass. It’s close to the French – Italian border, a must see or do for many motorcyclists. 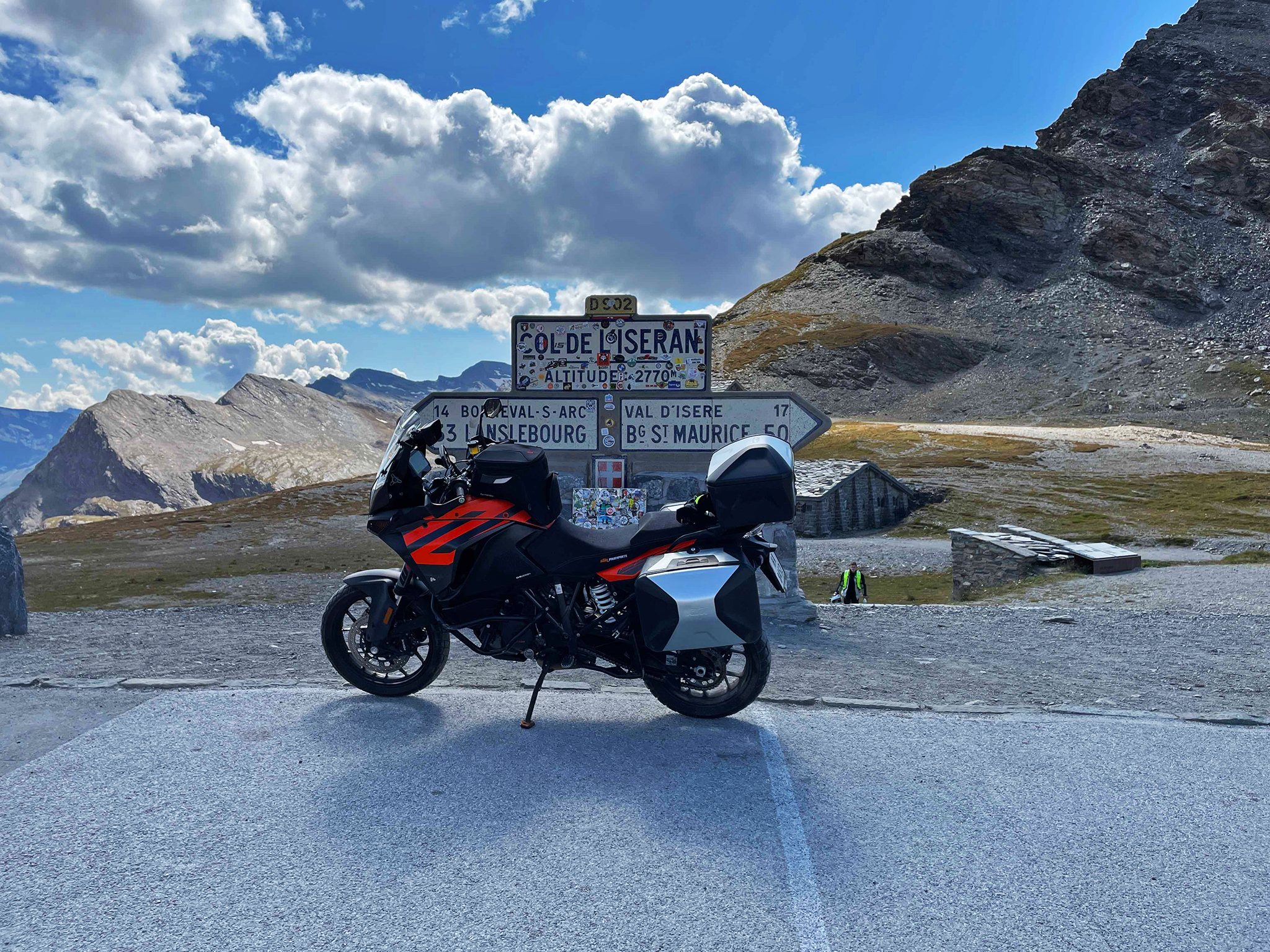 At Col de L’iseran, and the highest paved road in the Alps.

Settled in Italy the plan was to do a one day excursion. From Italy and over into France. Ride Col de l’Iseran, maybe a little bit beyond, and return. I’d had enough offroad excitement the day before. And as a result of that experience also had to sort out the rear brake issue.

That was the first priority of the day. Finding someone who could do the job.

The nearest KTM Workshops was in Turin. Which was a fair bit away from where I was. It would also take a lot of time. Time I  would rather spend on riding in the mountains.

One local workshop turned up with excellent reviews. Moreno Moto is situated in Susa, about 45-50 minutes ride from where I was and in the direction I’d planned to go anyway. It took a little back and forth to find Moreno Moto. Primarily because my GPS wasn’t being directly helpful. But finally I found the place. 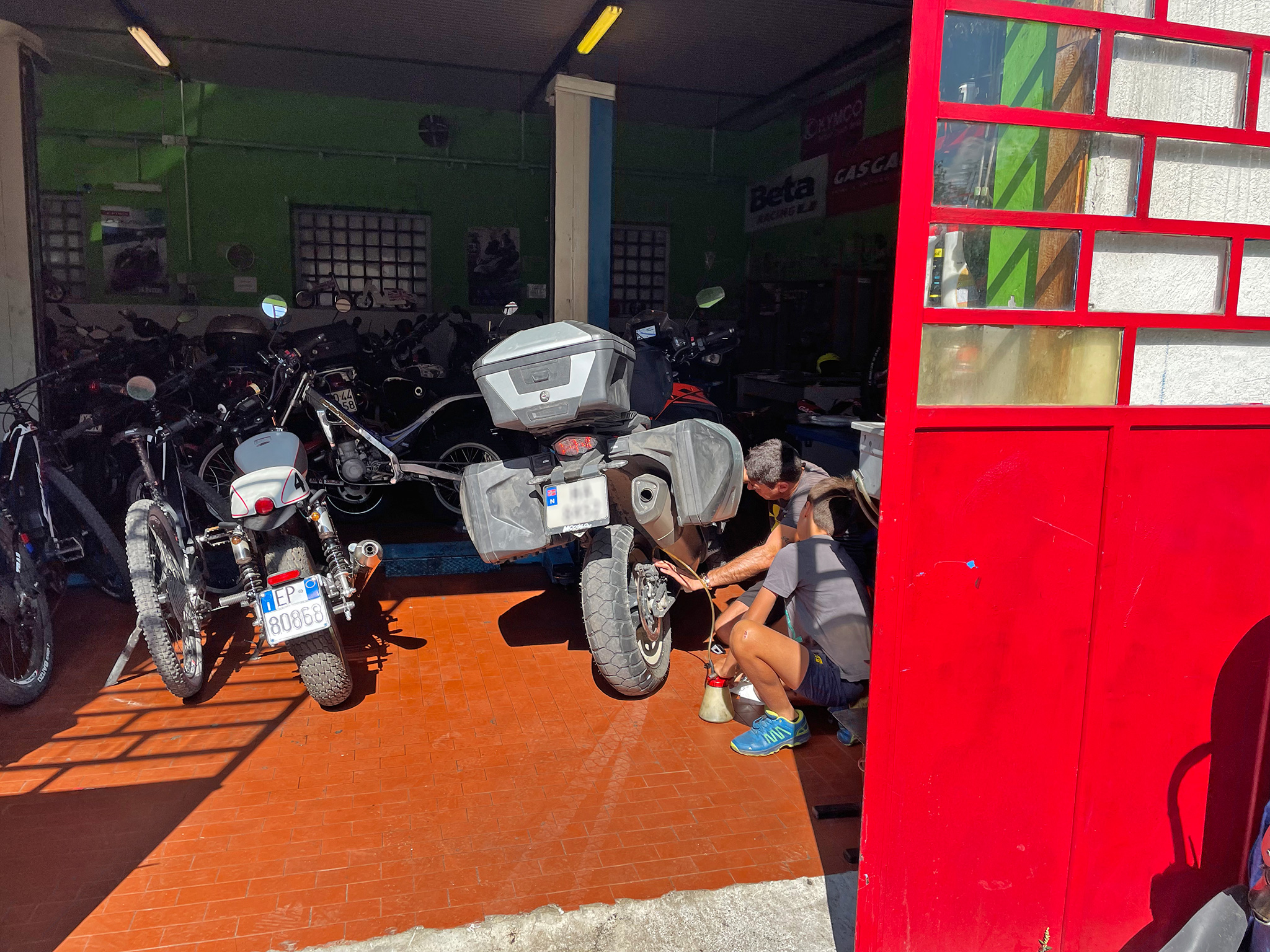 At Moreno moto in Susa getting rear brake fixed

The owner, Franzoni Moreno, was clearly a bit stressed that morning. I guess he had a a lot of work to be done. He didn’t speak one word of English, or German for that matter. But he quickly got the gist.

I thought he would turn me down at first. He didn’t come across as enthusiastic by the prospect of extra work that morning. But he didn’t dismiss me, and the problem was quickly diagnosed to be air in the braking system. Because of cooked brake fluid I guess.

A little later, with the help of his son, the job was done. Asked what it cost. He waved me off but since being insistent,  he signaled I could give some money to his soon. Which I did.

Both were happy as I left. The son in particular.

Done with the fixing and brakes fine, Col de l’Iseran was next. From Susa I took SS35 up in direction of the border. Yet another of those border crossings that happens almost without you noticing it.  The road changed to D1006, and led up towards the pass Mont Cenis the dam Col de Mont Cenis and the artificial lake. 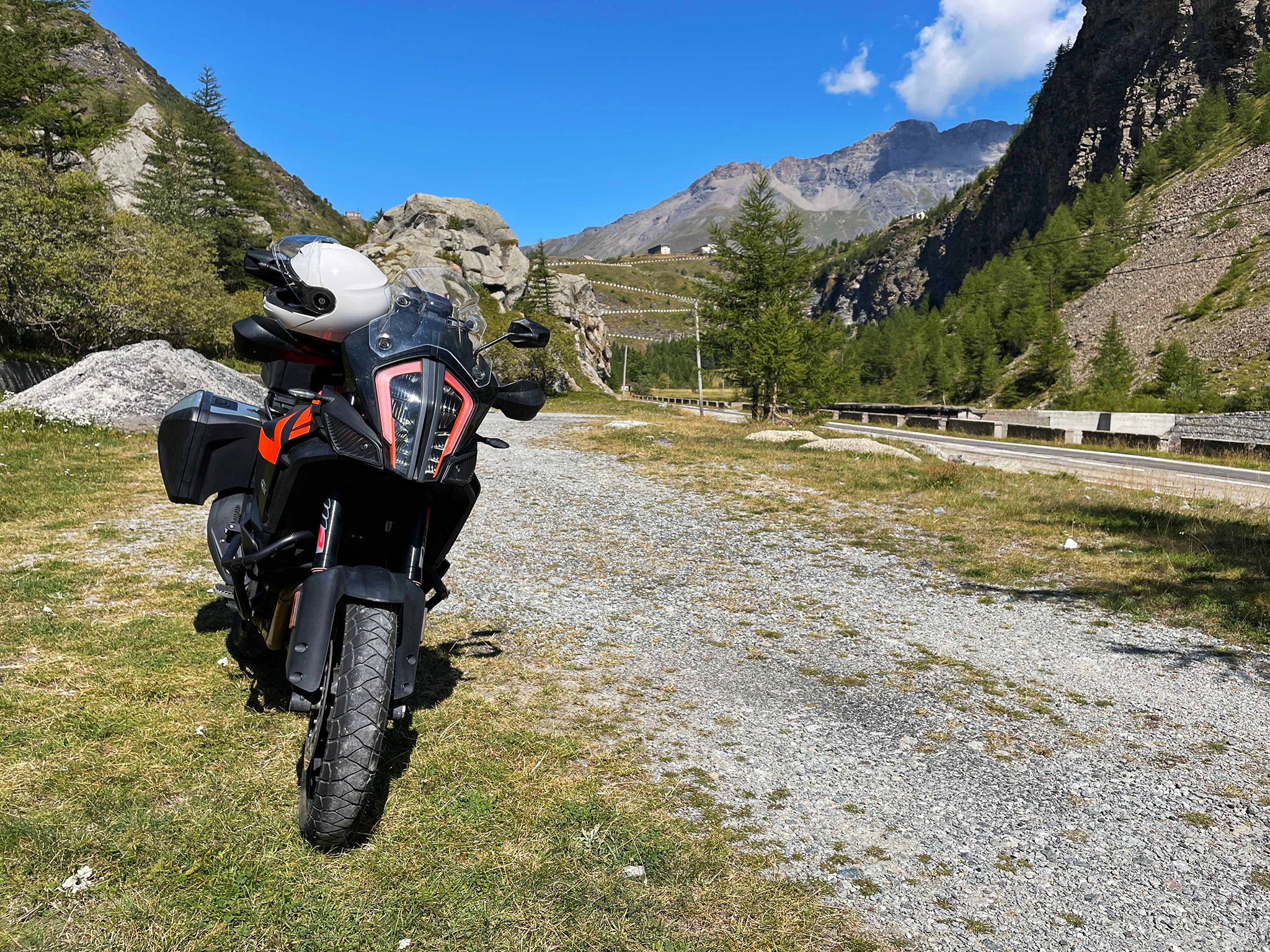 A quick stop for a lunch, then I paced on. I must say, this part of France really is something else. I could say exactly the same about all the regions of the alps I’ve visited. But it is a bit special, when you’re there for the first time.

Soon the valley of Va Cenis opened up.  The below video clips conveys pretty well what awaits you as you come down from the lake.

From Val Cenis I carried on northeast on D902, towards Bonneval-sur-Arc, yet another skiing commune in the Auvergne-Rhône-Alpes region.  Soon enough the climb up towards Col de l’Iseran began. 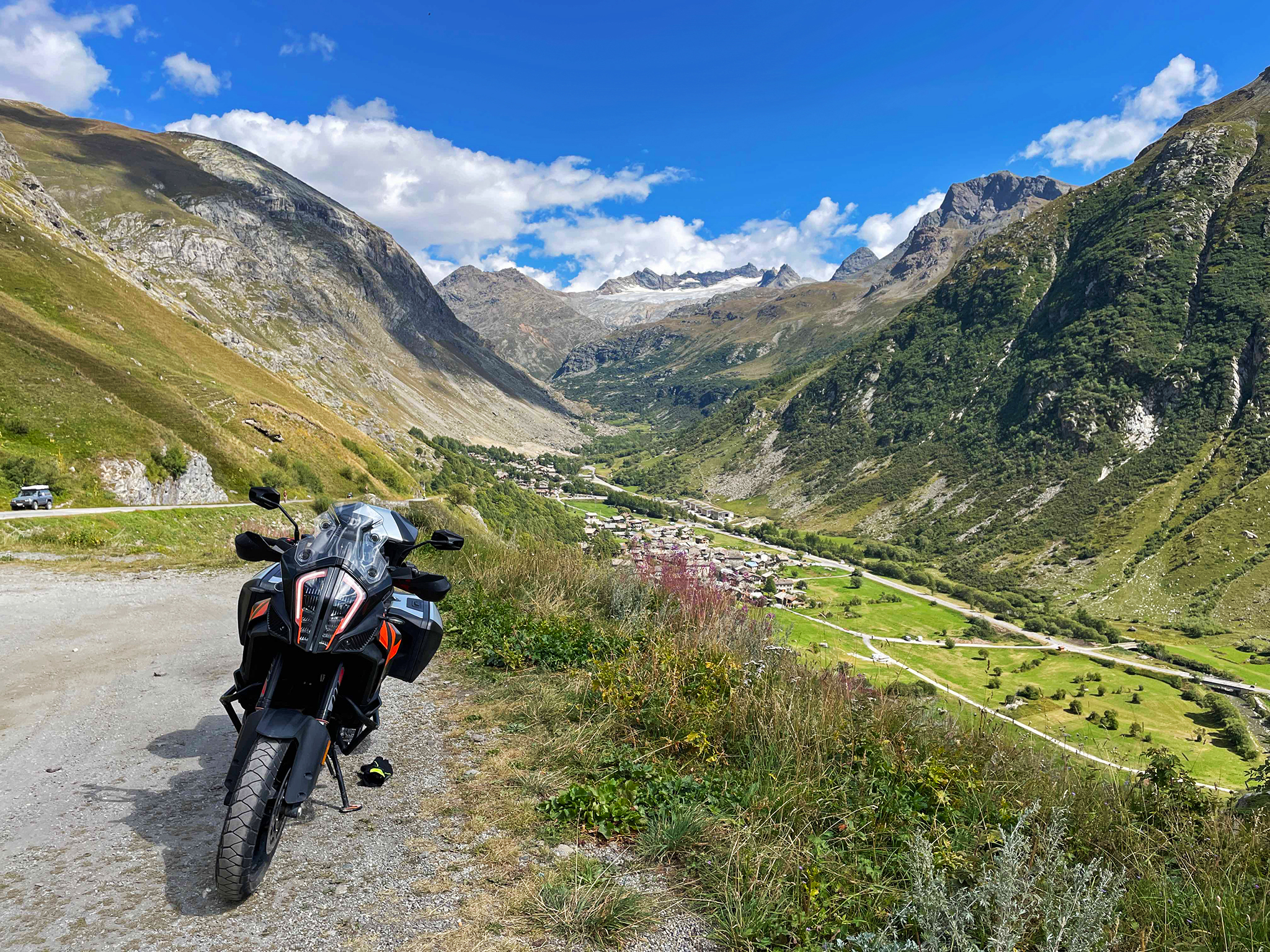 Ascending on D902 with Bonneval-sur-Arc in the rear

On the way up I had to stop several times. Below how looking southwest down the valley in direction of Val Cenis.

View towards Val Cenis, from higher up on D902.

I could have stayed for long, just marveled at the views. But the day was swiftly progressing towards later afternoon.  I had to quit stopping around every corner. This is, as many will agree, really hard when you’re in an environment like the French Alps. And it isn’t easier when the weather is nice, and the temperature ditto. 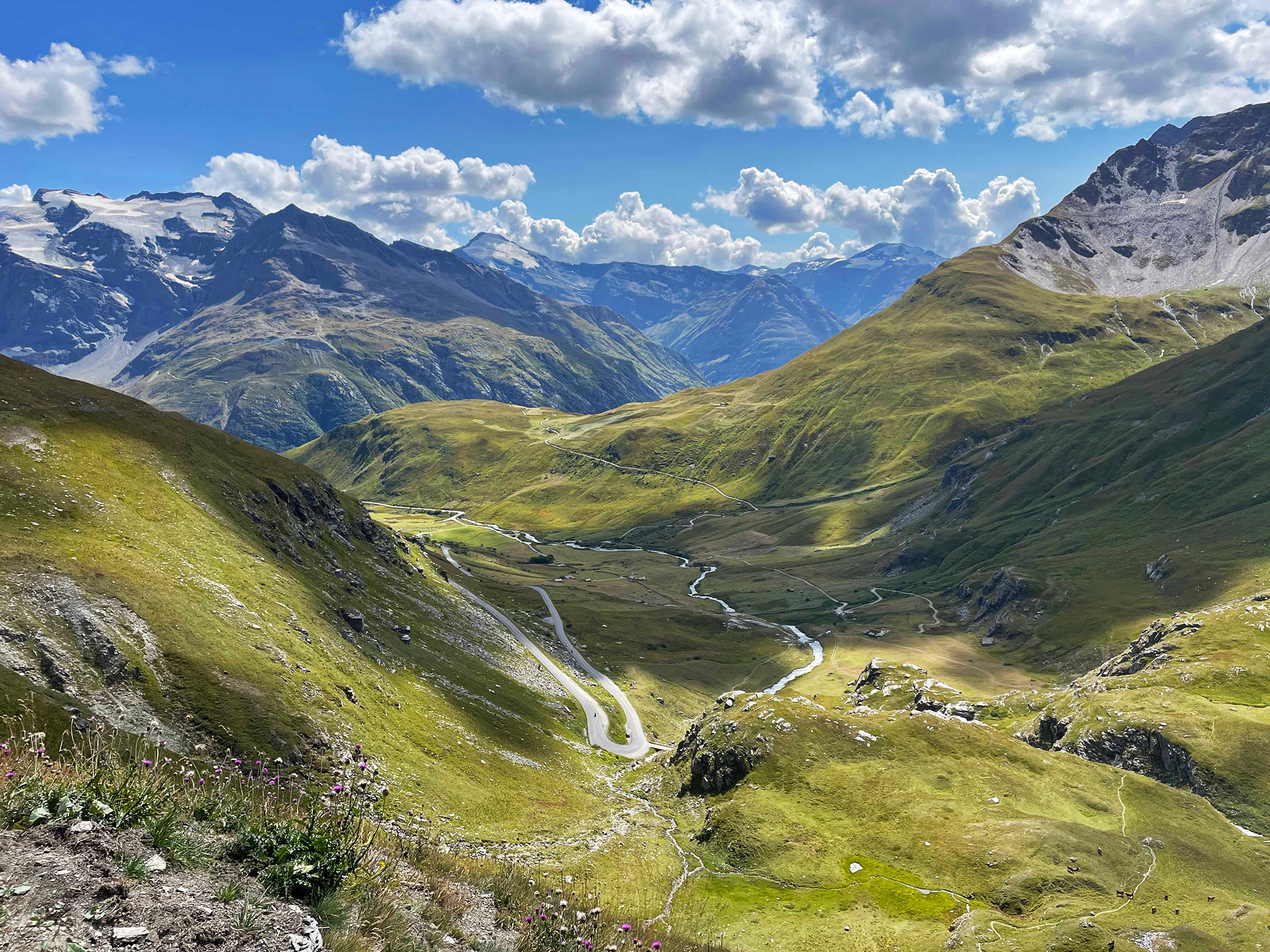 Finally I arrived at the peak of the pass, at 2770 meters altitude. There were a few bikers there, and a few cars. But nothing like you might experience in the Dolomites.

I hung around for a bit, then rode down on the other side, towards Val d’Isere. The plan was not to carry on, as it would mean a very long ride back to base. 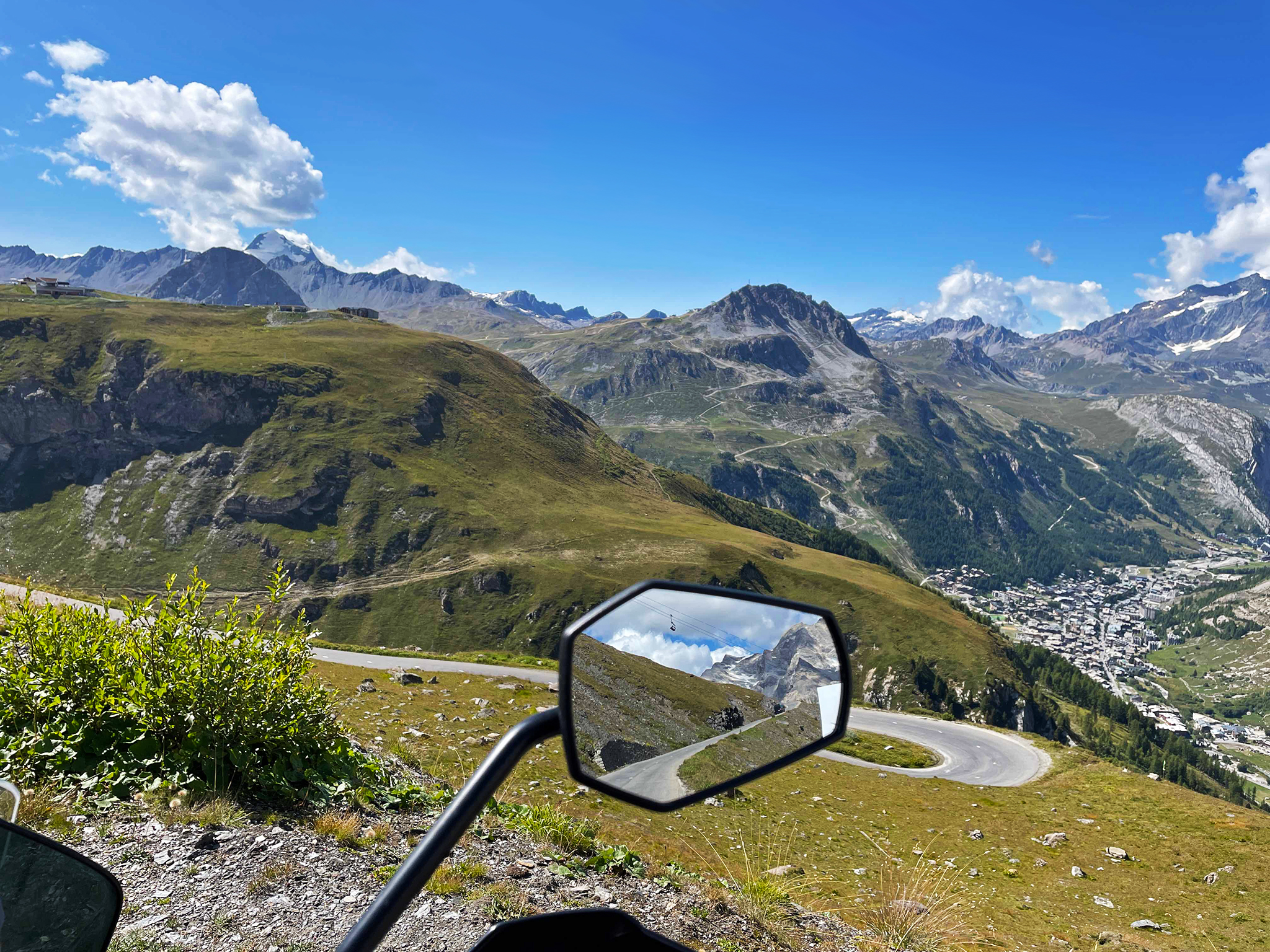 Val d’Isere down below.

So I turned around and rode up again, across the pass, and took the same route back to the hotel. It certainly had been an eventful day!