Channel crossing, first time with a motorcycle. As the plan was to head over to England I’d booked the ferry from Hook of Holland to Harwich.

It would be a short riding day, down across Afsluitsdijk, following the main road to the ferry place, then some 6+ hours on a boat.  Then stay overnight in Harwich and on motorways up through England to the next destination. 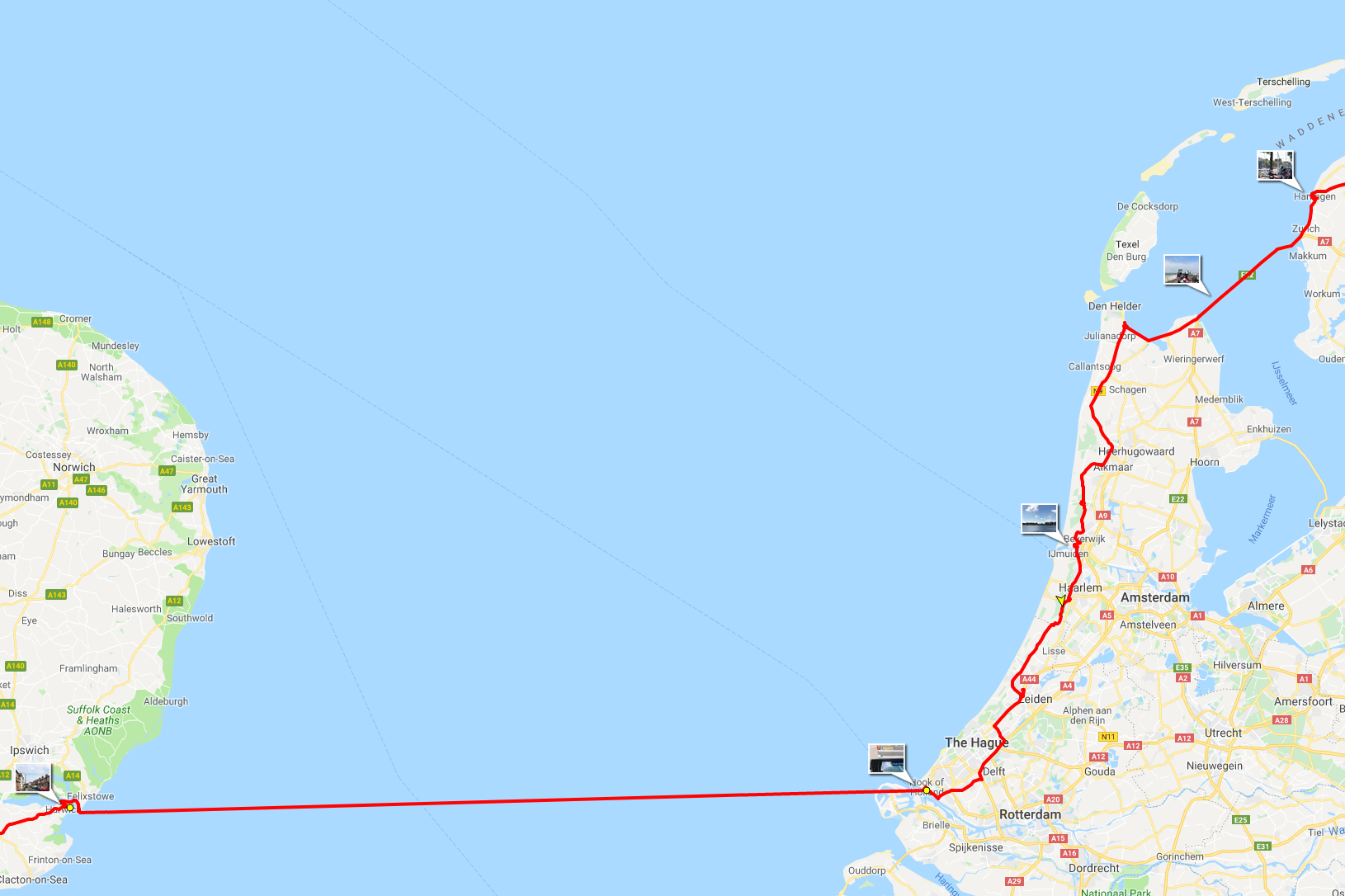 Channel crossing and Netherlands, the route of the day

From Harlingen I rode southwest on the N31. After a few kilometers it merges with the E22 or A7, the road across Afsluitsdijk, or “Shut-off-dike” if directly translated to English. 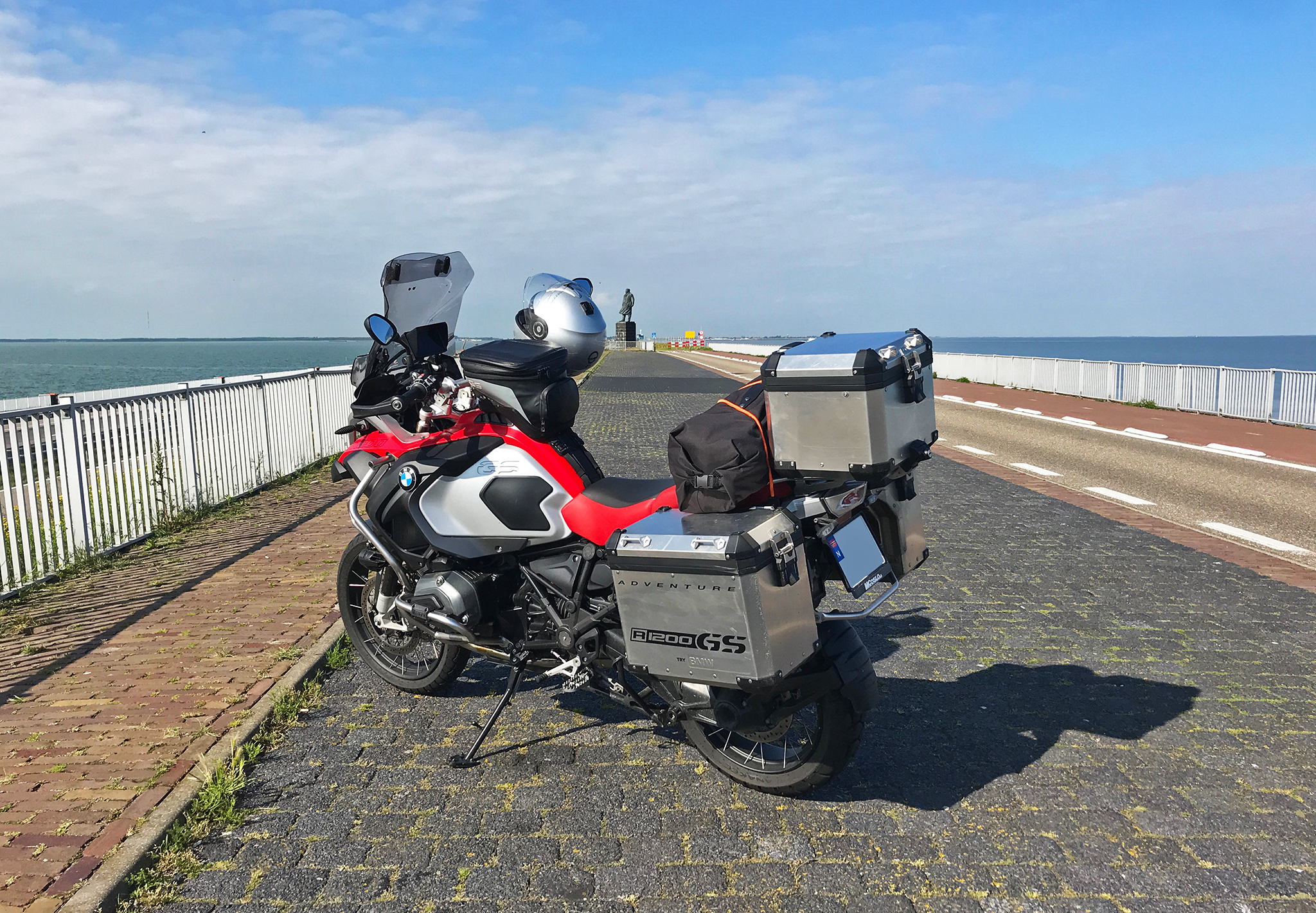 On the Afsluitsdijk, with a statue of Dr. Ir. Cornelis Lely in the rear

It’s an impressive construction, especially considering it was constructed between 1927 and 1932. Protecting the country for more than 80 years it’s now being upgraded to withstand rising sea level and further enforced.

After the dike I continued down along the coast. With the experience of small road riding from the day before fresh in mind I had no interest in getting stuck in endless arrays of roundabouts and traffic lights again. So I stayed on the main roads.

I’ve been in Amsterdam many times and had neither desire nor need to ride into the city with a motorcycle. Amsterdam is great, with lots of charm, and ditto lots to offer. If you plan to ride there it might be a good idea to find accommodation right outside of town, and then go into the city with tram, bus or train. 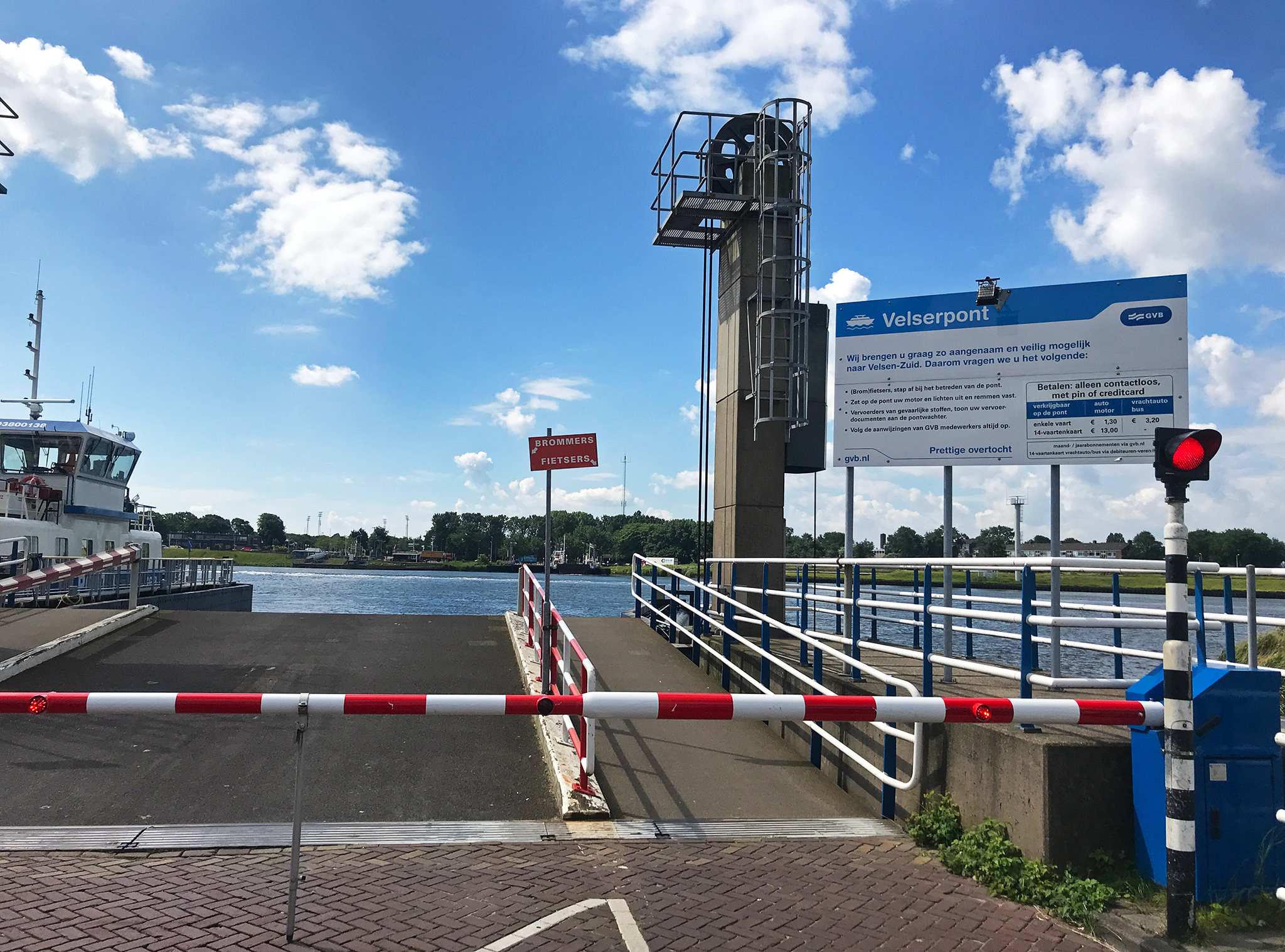 Velserpont Noord, waiting for the ferry.

Avoiding the city, with potential traffic I chose to cross over at Velsen Noord (North) with a ferry. There was no traffic, few cars and only took a few minutes to get across. 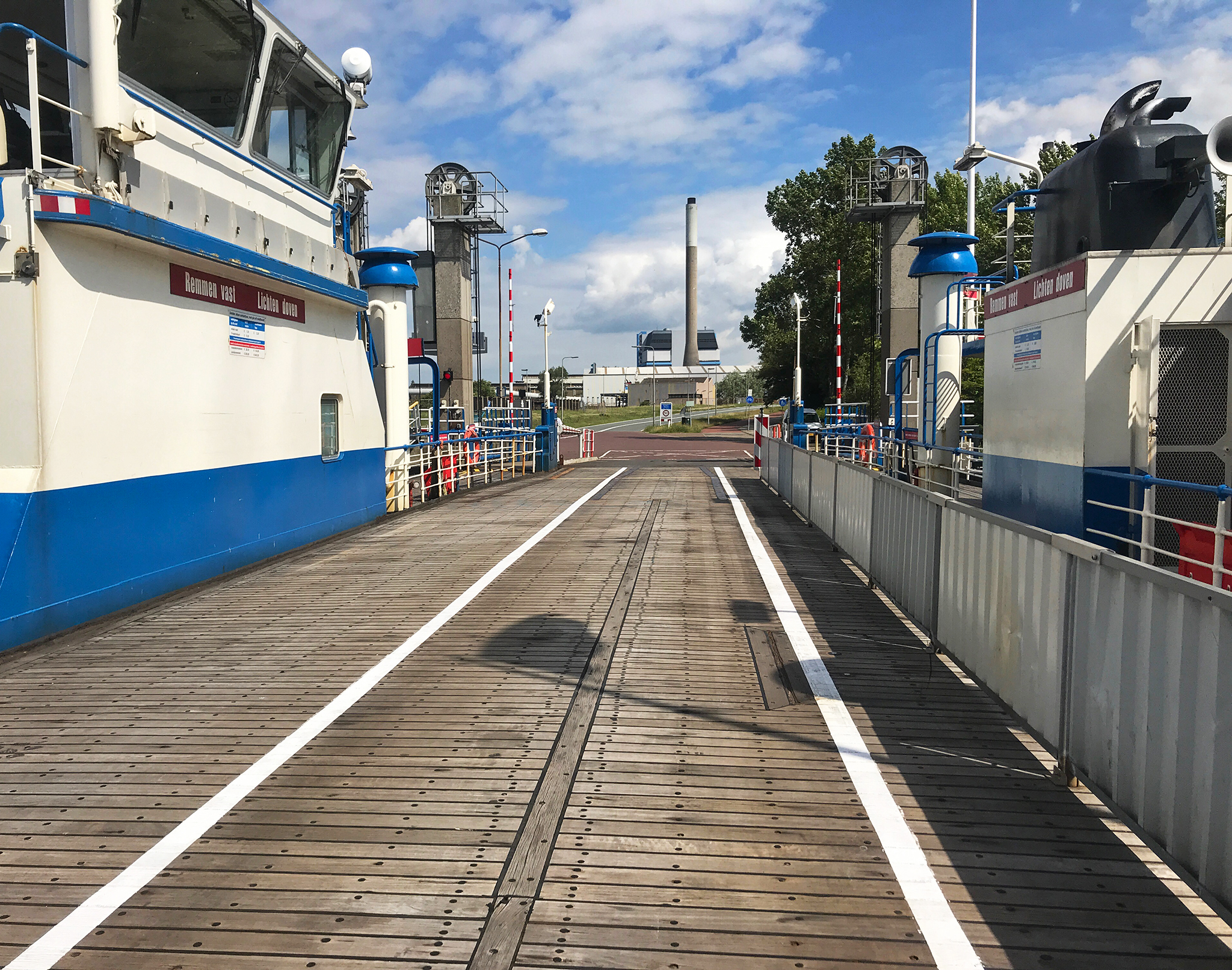 Velserpont ferry, ride on, ride off 🙂

Cheap too, paid only EUR1,30. if you don’t want to spend the time you can take motorway A9, or A22 and still avoid Amsterdam. I had plenty of time to make it to the ferry place, and was in no hurry.

I kept on south past Leiden, then around The Hague and reached, quite literally, the end of the road. 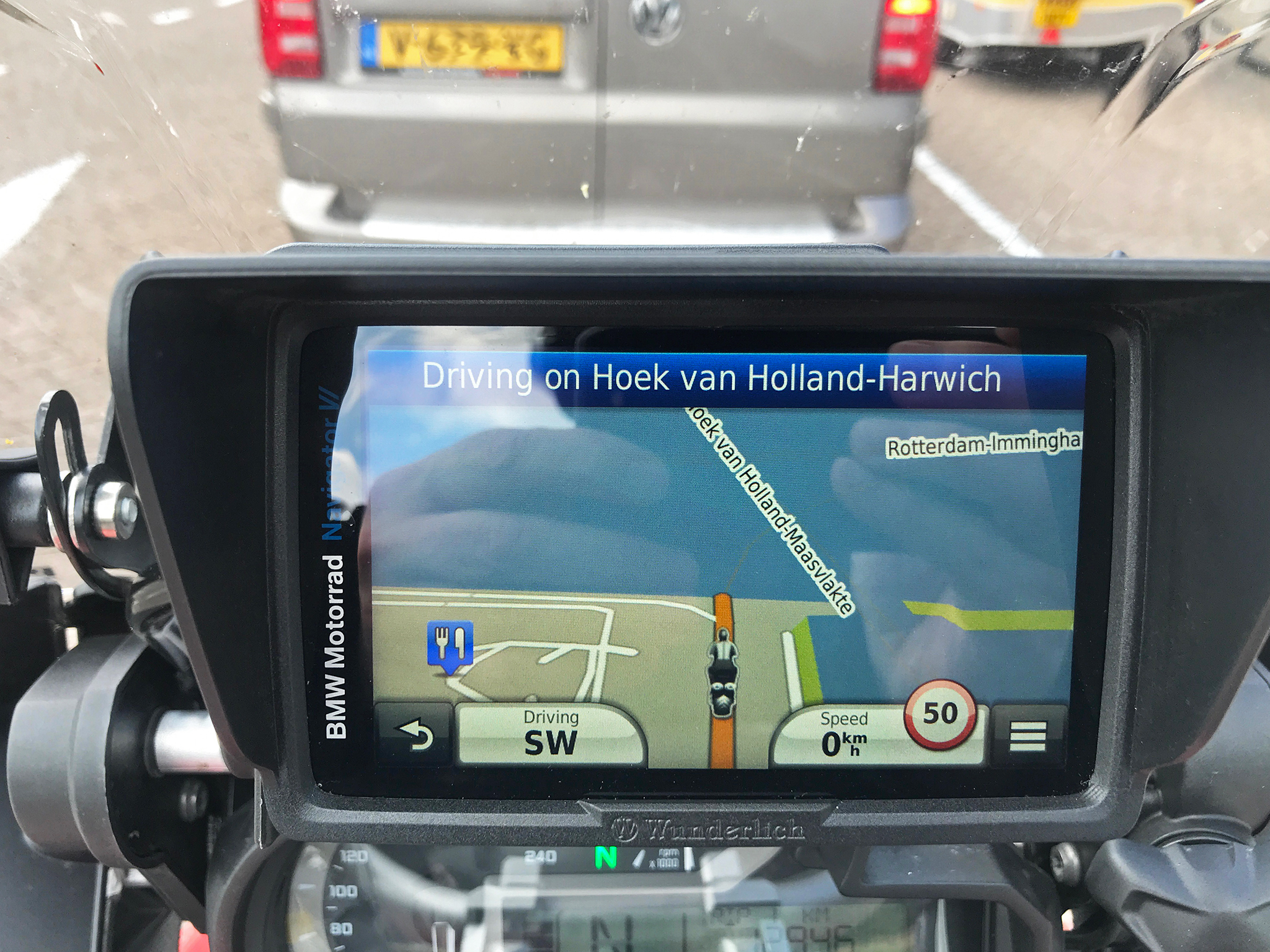 Riding on the ferry there were lots of motorcycle riders and a whole troop of scooter riders returning home from a Euro trip.

Hook of Holland is a nice way to cross the channel. Day sailing is the cheapest option. For a few extra pounds you can get a cabin which is practical for a solo traveler, a place to crash for a few hours plus storage for all your gear. 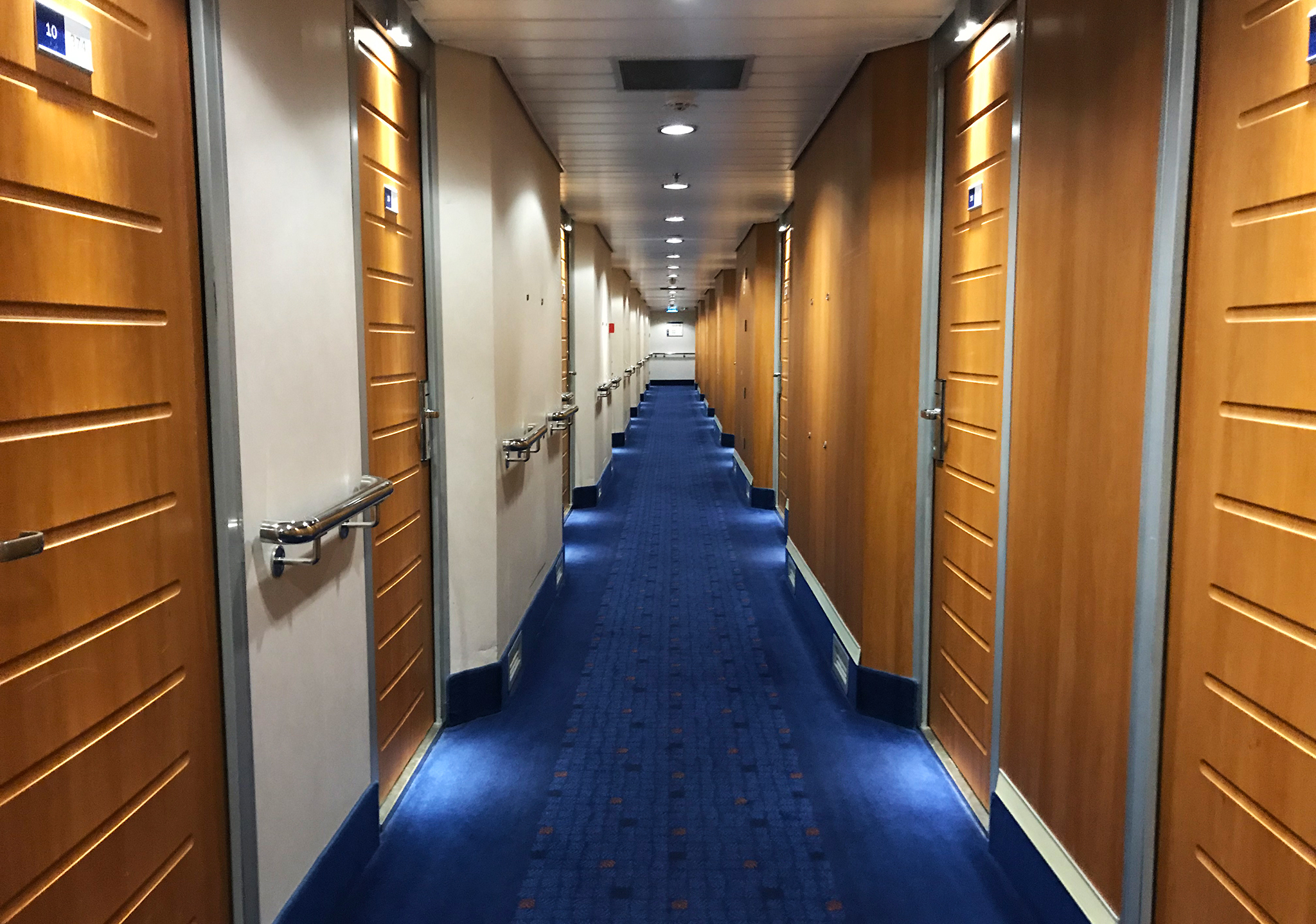 The cabin deck for economy class

Many years ago one could take a ferry from Norway, several places, to England. Or cross over to Esbjerg in Denmark, and take it from there.  All passenger routes have since been dropped, allegedly due to lack of traffic.  I’ve read some lofty plans of restarting a service. or talks regarding a ferry from Norway to Scotland. But per early fall 2019 still nothing concrete.

Maybe the whole Brexit situation will change this, time will show. 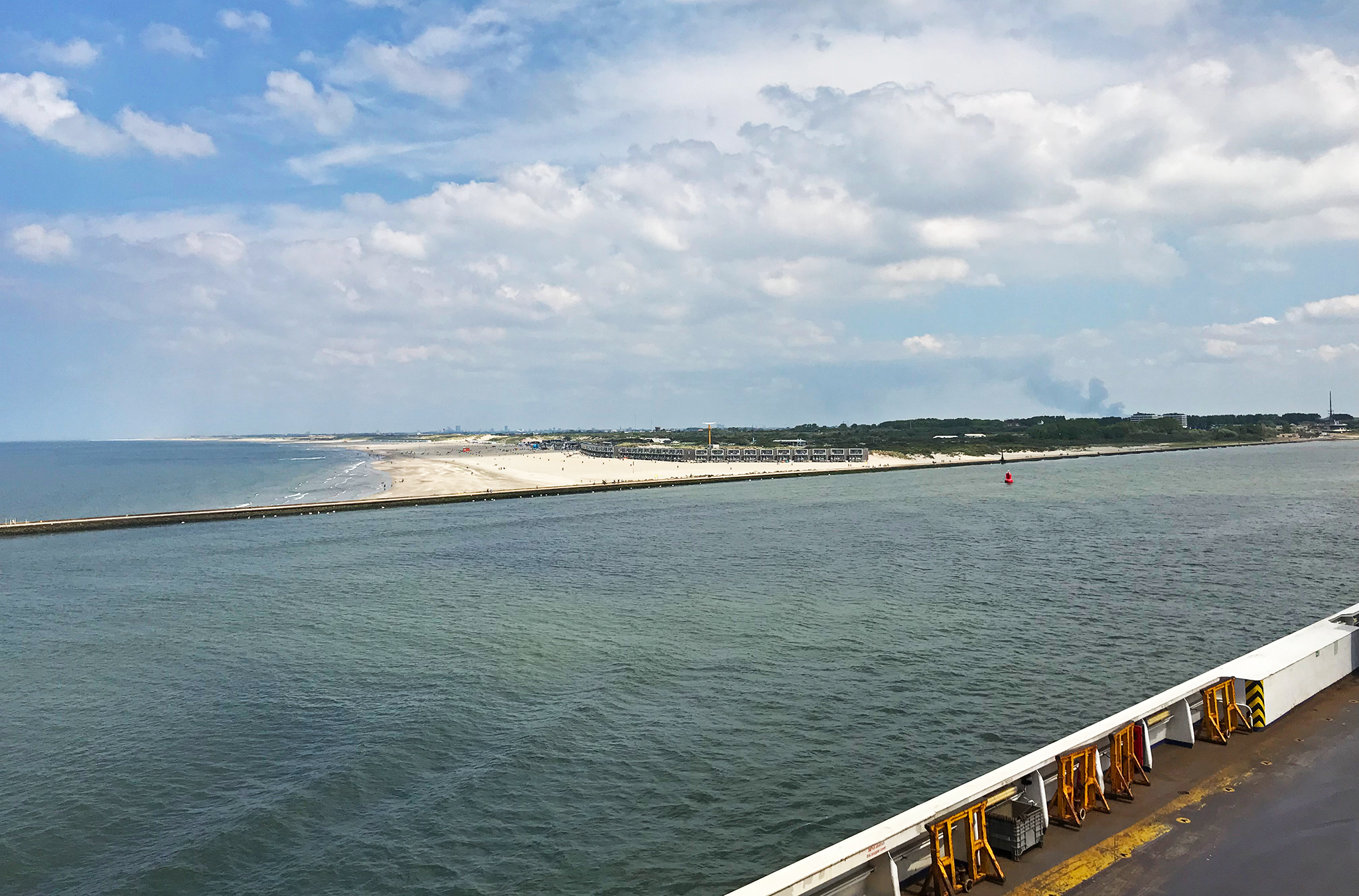 Farewell to Holland, or The Netherlands

Shortly after boarding it was sail-away and farewell to The Netherlands.

The ferry crossing to Harwich takes 6hrs 30 minutes.  I arrived in the evening and had just enough daylight to do my first bit of riding “on the wrong side” before the dark set in. 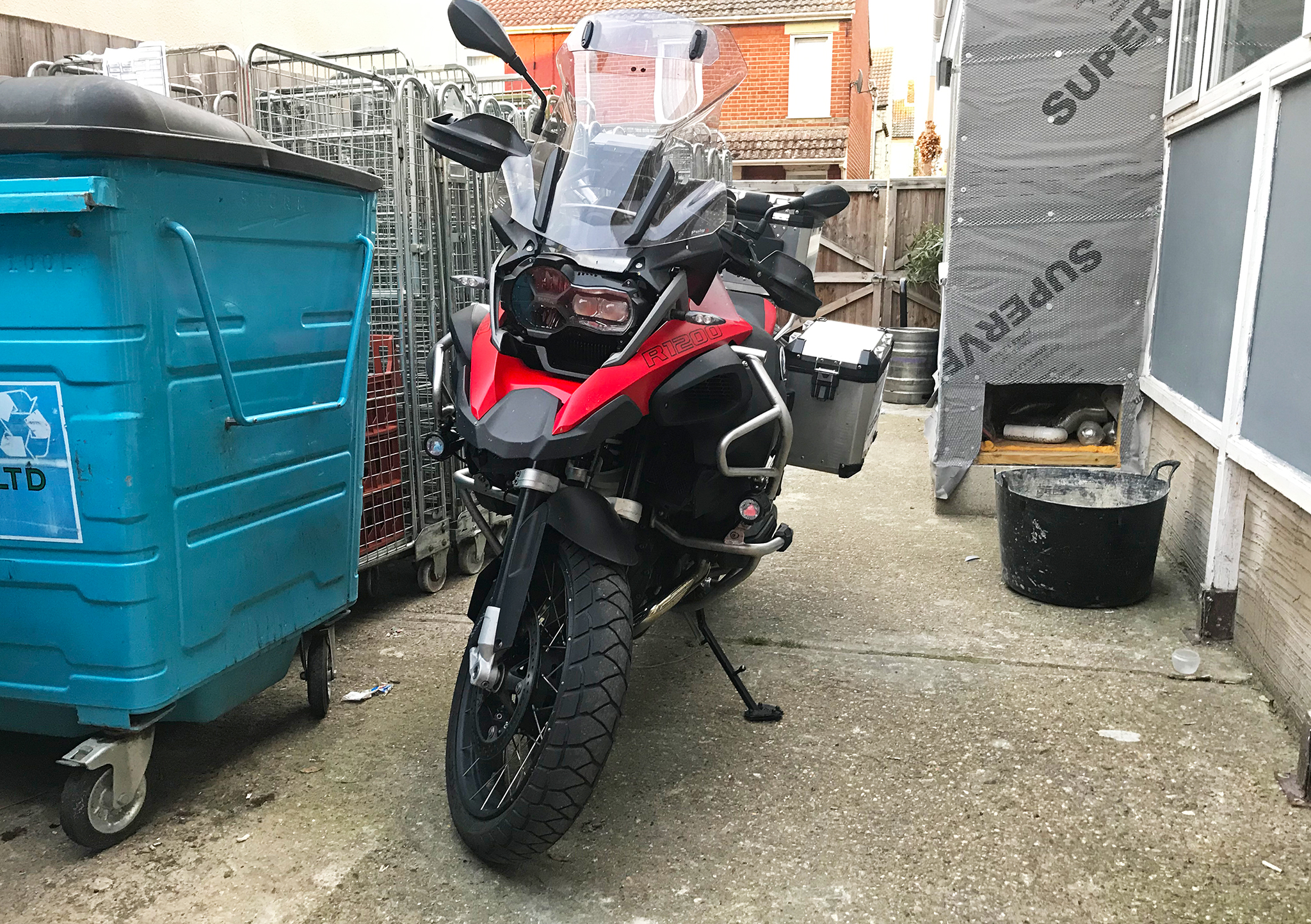 Big enough for my motorcycle and behind a locked gate

I’d singled out a cheap place to stay, with decent reviews.  It was OK for my needs. The staff let me park the motorcycle in in the rear, behind a locked gate. The only downside was that arriving late there was no food serving.

A fish & chips place nearby catered for my needs for food and drink and on a full note the day ended. 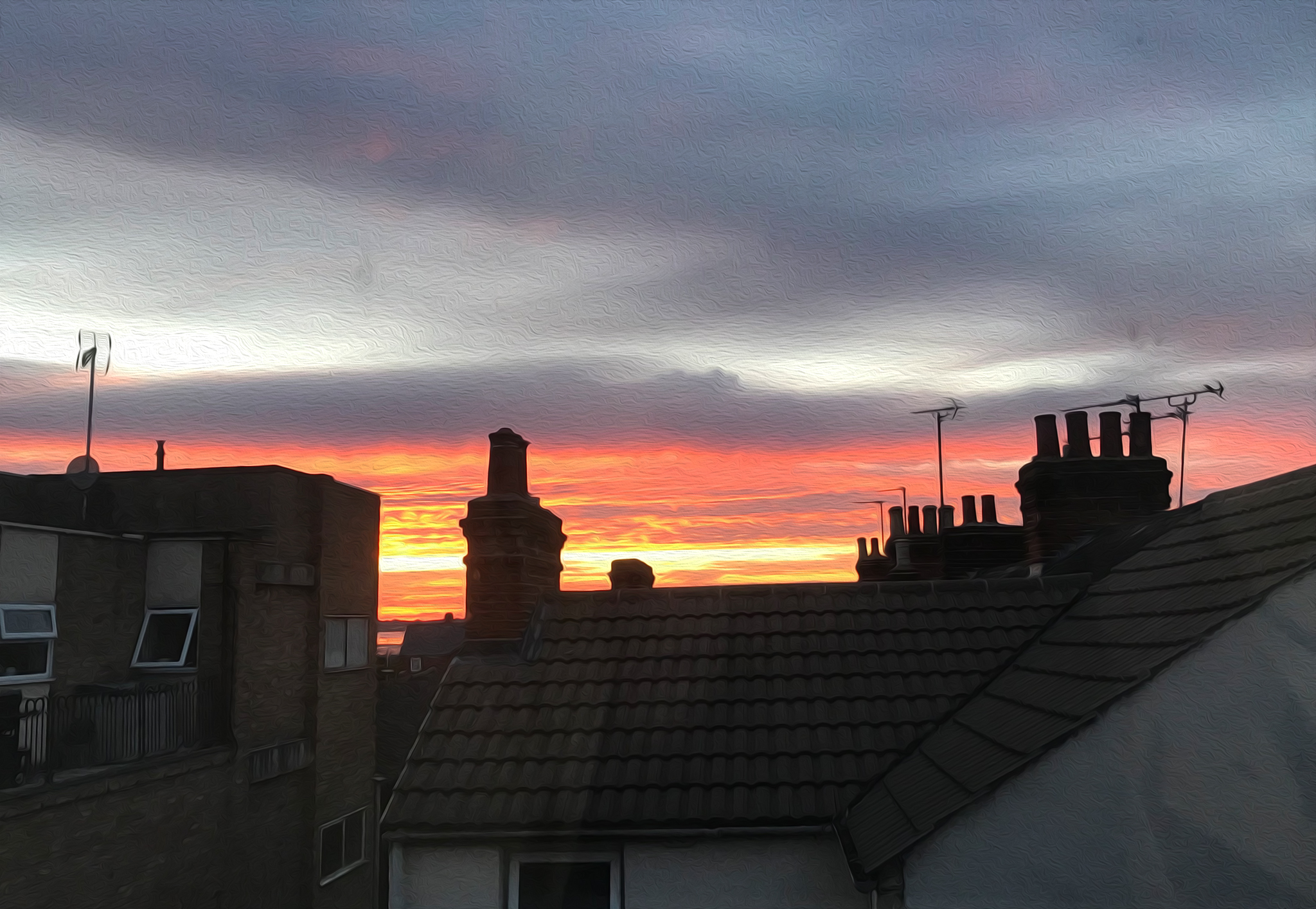 Sunset over the rooftops in Harwich