10000 kilometers on the KTM 1290 Super Adventure S very soon. It has gone fast. I attribute that to it’s comfort, and overall rideability.

It didn’t start out that well. Or, it wasn’t obvious I’d ‘be sold, in the beginning. You can read about first impressions here. I’m not a typical KTM 1290 customer. Just a bloke who acted spontaneously. One who, after 3 beemers, felt like it was time to try something new.

And new it was. In oh so many ways. Just one thing was familiar. The tyres. So now I have considerable experience with Michelin Anakee Adventure on the 1290 as well. For me, it’s nearly a perfect match. For on-road and the gravel/offroad sensible to do with a bike this size. 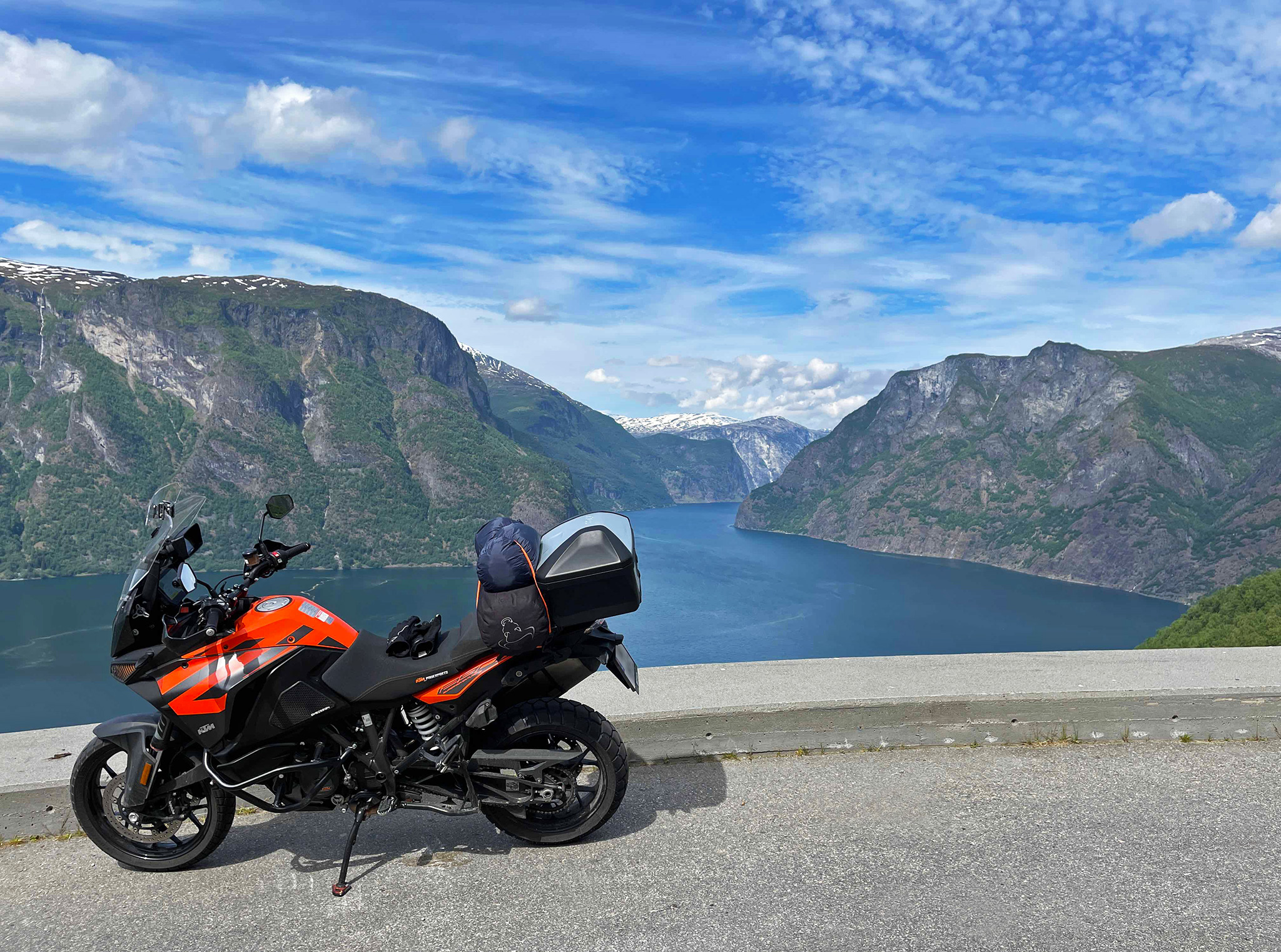 A few times in the beginning it happened the bike would not fire up. Pressing the keyless button nothing happened. Online I found some posts about it. Some claimed it was down to KTM delivering poor quality FOB sensors. Turned out to be untrue.

The real reason is/was a protection mechanism. It is related to the steering lock. When the steering tilted the lock might have resistance and mechanism won’t release. As a result the bike won’t start. Just wiggle a little on the steering, problem solved.

Nothing is perfect. Few settings just click right away, Well, for me anyway.  From the first moment I knew there were things I had to change. You can find some of the changes described here. Since then I’ve done very little. Have added crash bars.

Neither SW-Motech nor KTM could deliver anything “before Christmas” (due to corona they said). Had no patience to wait for forever. So I settled for an inexpensive set from MotoGuard , seller Motea. They worked out well in the end. And the company shipped fast. 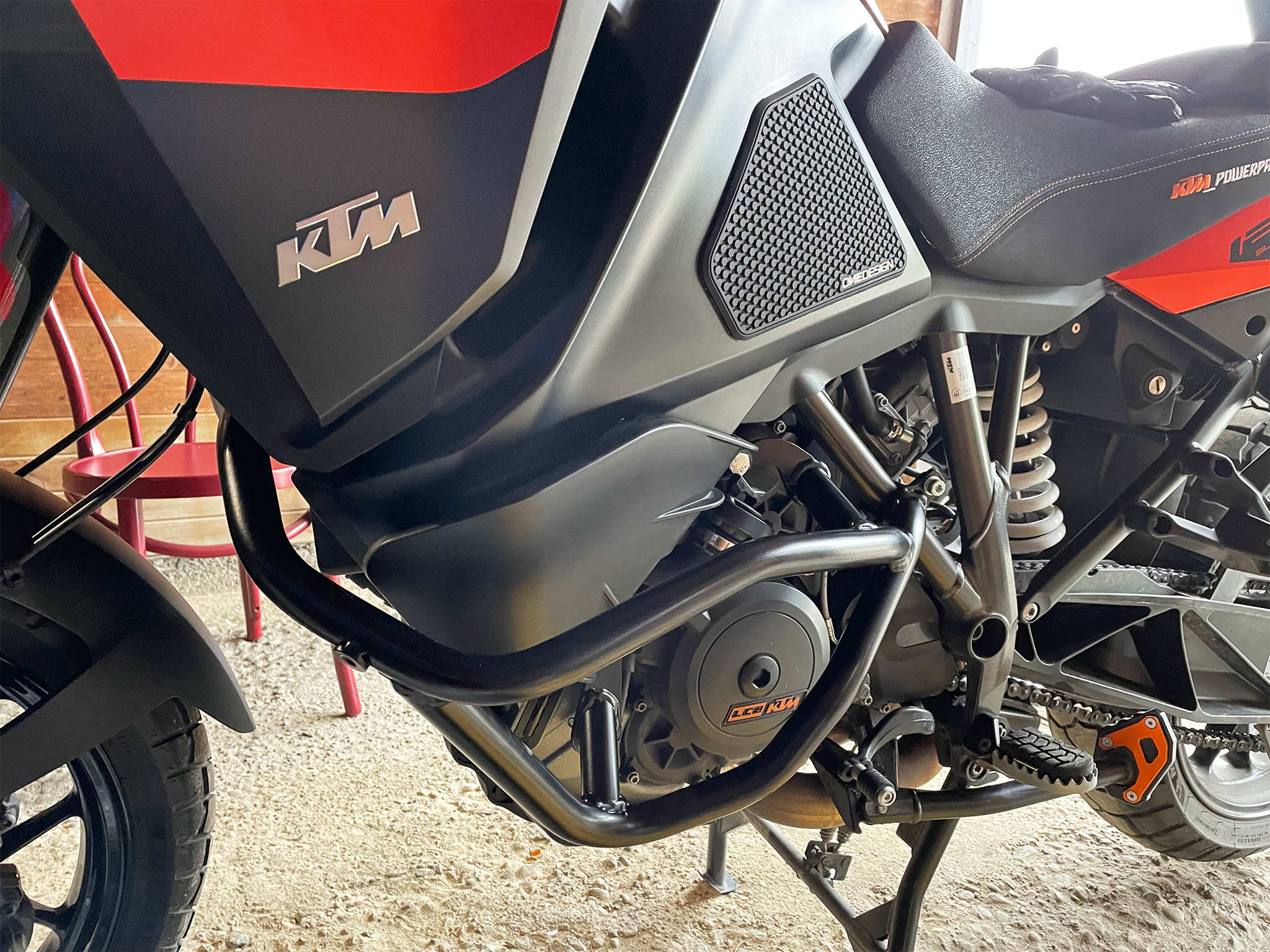 However, things weren’t perfect. There were faults with the first shipment. Welding debris inside the pipes made one bar sound like a baby rattle. I filed a complaint and got another set sent quickly. Free of charge. It had faults too. But by combining items in the two shipments it worked fine.

The bars are actually well made. Solid, with mounting properly dimensioned. And they look good. Might add the fairing or upper set as well. Not made up my mind yet. Motea sells other useful stuff as well. They’re cheap. Thought about buying a set of soft bags. To have in addition to the KTM panniers, which I really don’t like. We’ll see about that later.

I put a GPS mount on. First bought some cheap shit from China. But it required a clunky mount. Therefore GPS positioning would be affected. Because of needs for more parts I ditched it and went for KTM powerparts. With the OEM GPS bracket system you can screw the GPS charging base right onto the mount.

Power outlets (switched) are inside the headlight box. You need to unscrew the headlight which is a fiddly job. Especially to get the light back in. Expect it to take 3 times as long as you think. But once fitted it works very well.

Next 10000 kilometers and more stuff

Have bought a SW-Motech tank bag that looks very well. Excellent quality. Will put it on before summer’s adventure in July. And that’s that. Sum up? I’m very satisfied with the bike. Been a bit worried about heat problems. On hot days, if you stand still idling for long you can feel heat from the cylinders. Specifically on the right side. But nothing that bothers me. As a result of heat concerns I have heat shields laying around but not found it necessary to put them on.